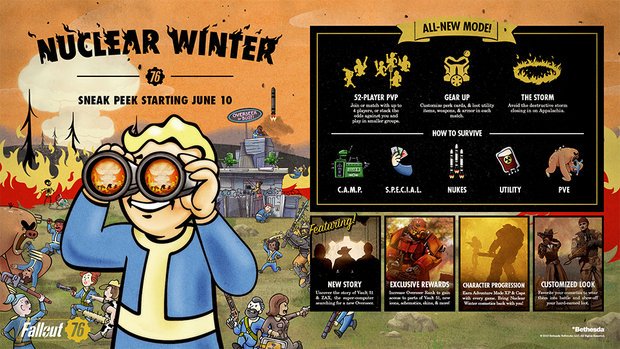 As mentioned, this free trial will include a sneak peak of new content.

Bethesda says you may notice something new in your menu when you load up the game.

That’s where we suspect you’ll find the new Nuclear Winter Battle Royale mode, which will pit you against your fellow players like never before.

Here’s a more in depth explanation of the mode courtesy of Bethesda:

“Nuclear Winter is a uniquely-Fallout 52-player PvP Battle Royale mode, free for Fallout 76 players. Nukes have set the world ablaze and the battle to claim your spot as Overseer of Vault 51 has begun – will you be the last one standing or be consumed by the ring of fire?

“Rank up, unlock exclusive perks and build your C.A.M.P. to weather the storm in true Fallout fashion. Scavenge for weapons, Power Armor, and even nukes to take on other players and the creatures of Appalachia to earn unique cosmetic rewards.

“Any XP or Caps earned in Nuclear Winter also carry over to Adventure Mode or Survival Mode.”

You’ll be able to trial some of this later today, but keep reading for a full in-depth explainer on everything else coming as part of the Nuclear Winter Expansion 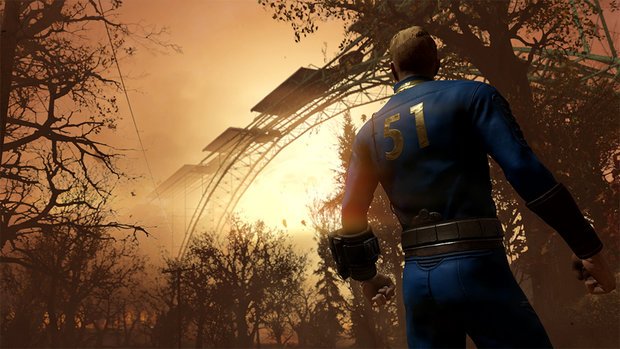 Nuclear Winter blends the competitive battle royale style with mechanics only Fallout can provide – from Power Armor and Perk cards, to C.A.M.P.s and wasteland creatures. Many of these mechanics have been adjusted to better suit this new gameplay mode and map size, including the stats of your weapons, armor, Chems and more. And while you can carry your Adventure Mode character into Nuclear Winter, their level doesn’t affect how much damage you can inflict or receive. Everyone starts each match on an even playing field. You raise your damage output and increase defensives by tracking down weapons and armor as the match progresses.

The creatures of Wild Appalachia have also been rebalanced in Nuclear Winter. They won’t be as tough to take down and killing them will earn you loot, but you’ll also alert nearby players to your location. Higher tier enemies like the Scorchbeasts drop the best gear in the game. When you pick up armor in Nuclear Winter, you’re not just picking a left arm piece or a right leg piece. All armor pickups contain the full set of armor to help you get stronger faster. Think of Nuclear Winter as the entire Fallout 76 experience, tightly condensed into about 20 minutes. 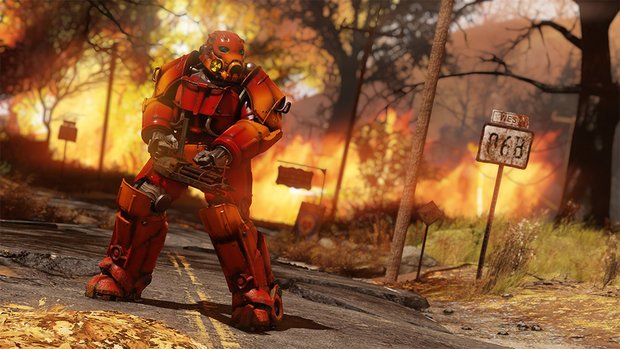 The C.A.M.P. setup is vastly simplified in Nuclear Winter. You no longer need resources to build and the mode preserves your Blueprints from Adventure Mode, allowing you to quickly drop your creation into the map. Doing so does not affect your C.A.M.P. in Adventure Mode. But be careful where you set up camp, because the ring of fire is still closing in and will make quick work of your settlement. Because setting up your C.A.M.P. no longer require resources, certain items had to be reworked so players aren’t simply dropping in hundreds of turrets at no cost. In Nuclear Winter, turrets are actually lootable items that can be found in boxes around the map or on defeated players.

Nukes have also been reworked for Nuclear Winter. With the reduced map size, they now have a smaller effect and area, though the effect of the nuke drop is persistent and will remain for the rest of the match. In order to launch a nuke, you’ll need to find four nuclear codes and one launch briefcase in a single match.

Nuclear Winter has a grand total of 73 Perk cards for you to unlock and equip; ten of these cards are for this mode only and cannot be carried over to Adventure or Survival Mode. These include Walking Arsenal (combines all the weight reduction benefits for ranged weapons into one card); Frog Legs (increases jump height); and Briefcase Bloodhound (helps you track down nuke briefcases). Each of these Nuclear Winter-exclusive cards is built to better suit the faster pace of this new mode.

For those worried about the competitive implications of VATS, don’t be! Unlike in Adventure Mode and Survival Mode, VATS only works on AI and will not target other players in Nuclear Winter. 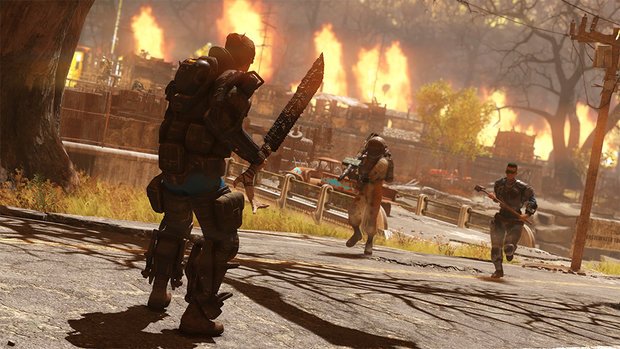 You can start with a new character, or you can bring a chosen character from Adventure or Survival Mode. Your character’s physical appearance will carry over from Adventure/Survival, but none of your weapons or Perk cards will. You’ll be dropped into Nuclear Winter clad in only a Vault 51 jumpsuit with your trusty Pip-Boy on your wrist, unless you’ve unlocked some fun outfits, which can be equipped from the start in the staging area. All your base game S.P.E.C.I.A.L. stats will be brought into Nuclear Winter, but you won’t have any of your Perk cards. Those will be unlocked as you play through the new mode. You also won’t have any of your S.P.E.C.I.A.L. passive bonuses, as those would provide some players with an unfair advantage.

However, if you have previously purchased any cosmetic items in the Atomic Shop, you’ll be able to mark those items as a “Nuclear Winter Favorite” in the Atomic Shop, allowing your character to equip them in Nuclear Winter. This includes outfit cosmetics, profile icons, and Power Armor and weapon skins. When you load up Nuclear Winter, you’ll find all these things in your inventory, ready to equip once the appropriate items are found through the course of the match. For example, you won’t be able to immediately equip your Power Armor skin, because you don’t start Nuclear Winter with Power Armor. You’ll have to find Power Armor in the map, and then you’ll be able to use that skin. When you go back to Adventure Mode or Survival Mode, you’ll bring any XP or Caps you earned in your Nuclear Winter matches and those will go to the character you were playing as.