Fallout New Vegas: The 7 Best Perks (& The 7 Most Useless)

The Fallout series has been around for a long time. With all of the changes that have been made in modern games, some things have been kept the same up until the most recent installment. One mechanic that players can get involved with is perks. Many fans consider Fallout: New Vegas to be the best 3D game in the series, so we thought we would take a look at the perks available in that game. Below is a list of the best and the worst perks that can be found in Fallout: New Vegas.

Updated September 30th, 2020 by Morgan Austin: After news broke about Mircosoft acquiring Bethesda, some fans have turned their focus towards Bethesda’s games. Whether they might be playing Fallout or Elder Scrolls games for the first time or jumping into their favorite games once again, the news about Bethesda and Microsoft has reminded some fans why they love these games. Fallout: New Vegas is sure to be a replayed game currently. Fans of the series will be familiar with the creative perks in the games, but not all of them are perfect for some players. 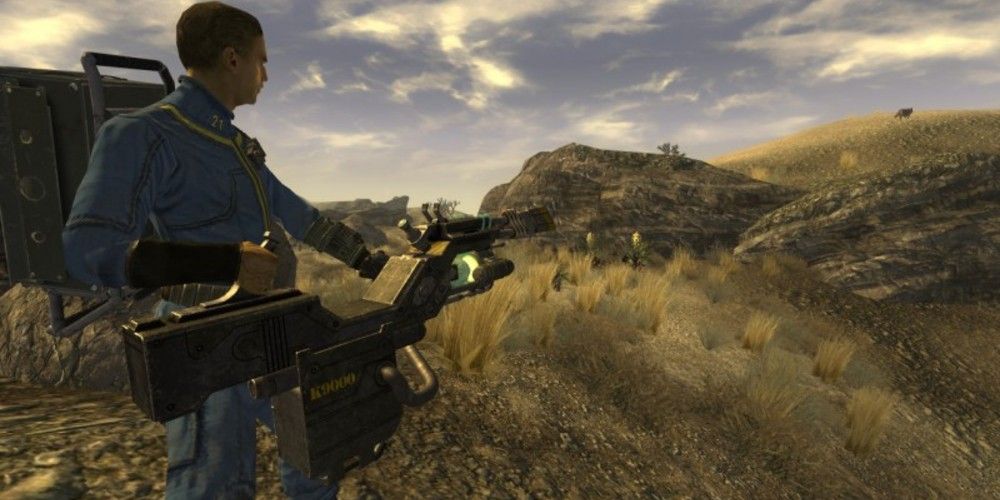 For those that like picking up as much food, junk, and armor pieces that they can carry, you’re sure to have experienced the frustration of being over-encumbered. Not only does it make the player walk super slowly, which is even worse when there are enemies nearby, but it also keeps players from fast traveling unless they drop some loot.

That’s where the Long Haul perk comes to the rescue. Whenever players are over-encumbered, this perk gives them the ability to still fast-travel. It might not be the best option for players who want to keep exploring, but it’s super helpful to have the chance to quickly travel to a safe location where players can stash their loot. 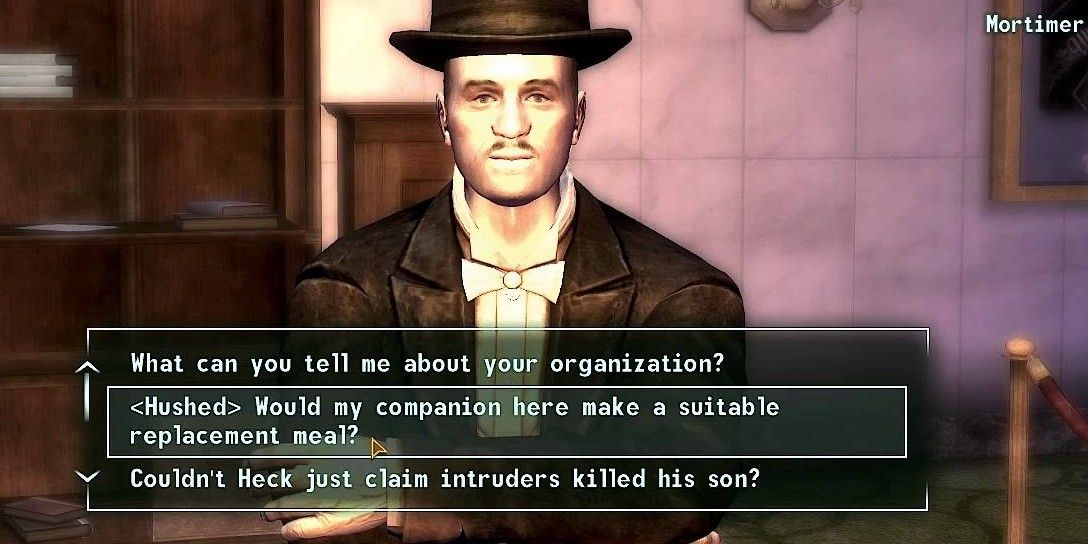 Cannibal is sometimes a good perk for players who want to have negative karma, but even then, it’s not that great. The Cannibal perk lets players eat any human and non-feral ghoul corpses while they’re sneaking so they can gain HP.

The main problem with this perk (besides how gross it is) is that if someone sees the player eating a corpse, they’ll turn hostile and start fighting the player. Luckily, this doesn’t affect companions, but it makes the perk feel more inconvenient when you have to make sure nobody is watching, especially if you’re desperate for health. 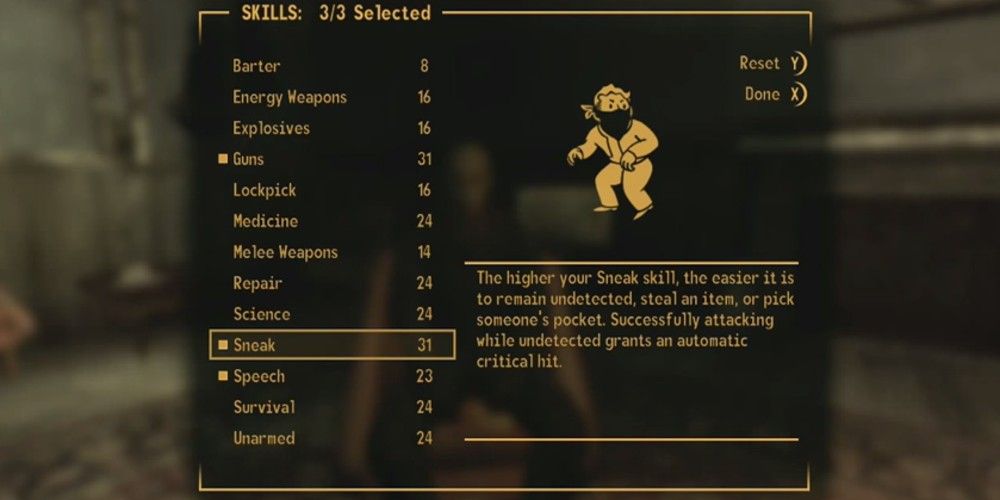 It’s not uncommon for players to have a plan in mind on how they want to spend their skill points. Sometimes though, it can be tough to feel like one must compromise on how many points they spend on what skills each time they level up.

The Tag! perk does help with this a bit, and it can be very useful in a pinch. This perk lets players add 15 more skill points to a skill. That can make a big difference for certain skills, and it’s a valuable perk to get considering how there aren’t as many options to get more skill points through books and bobbleheads as there are in other Fallout games. 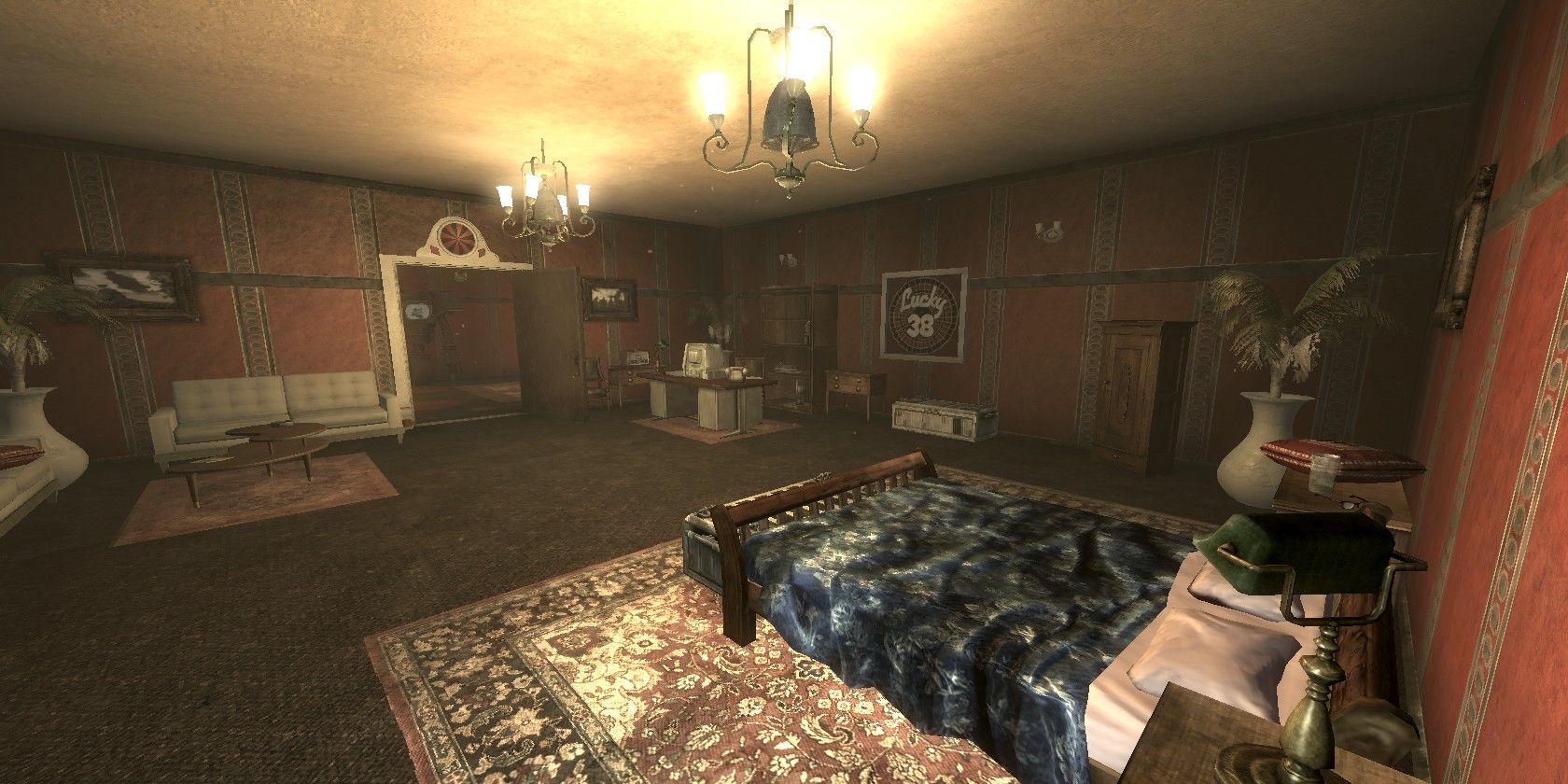 This is one of the most useless perks mainly because of how few times players get the opportunity to use it. Mister Sandman lets players kill sleeping characters instantly, plus gives a little extra XP from the kill.

This skill might help players who want to play as an evil character if they want to kill innocent, sleeping characters, but it’s still somewhat annoying to figure out when you can find someone sleeping. For other players who want neutral or good karma, it might be even harder to catch enemies sleeping anywhere. 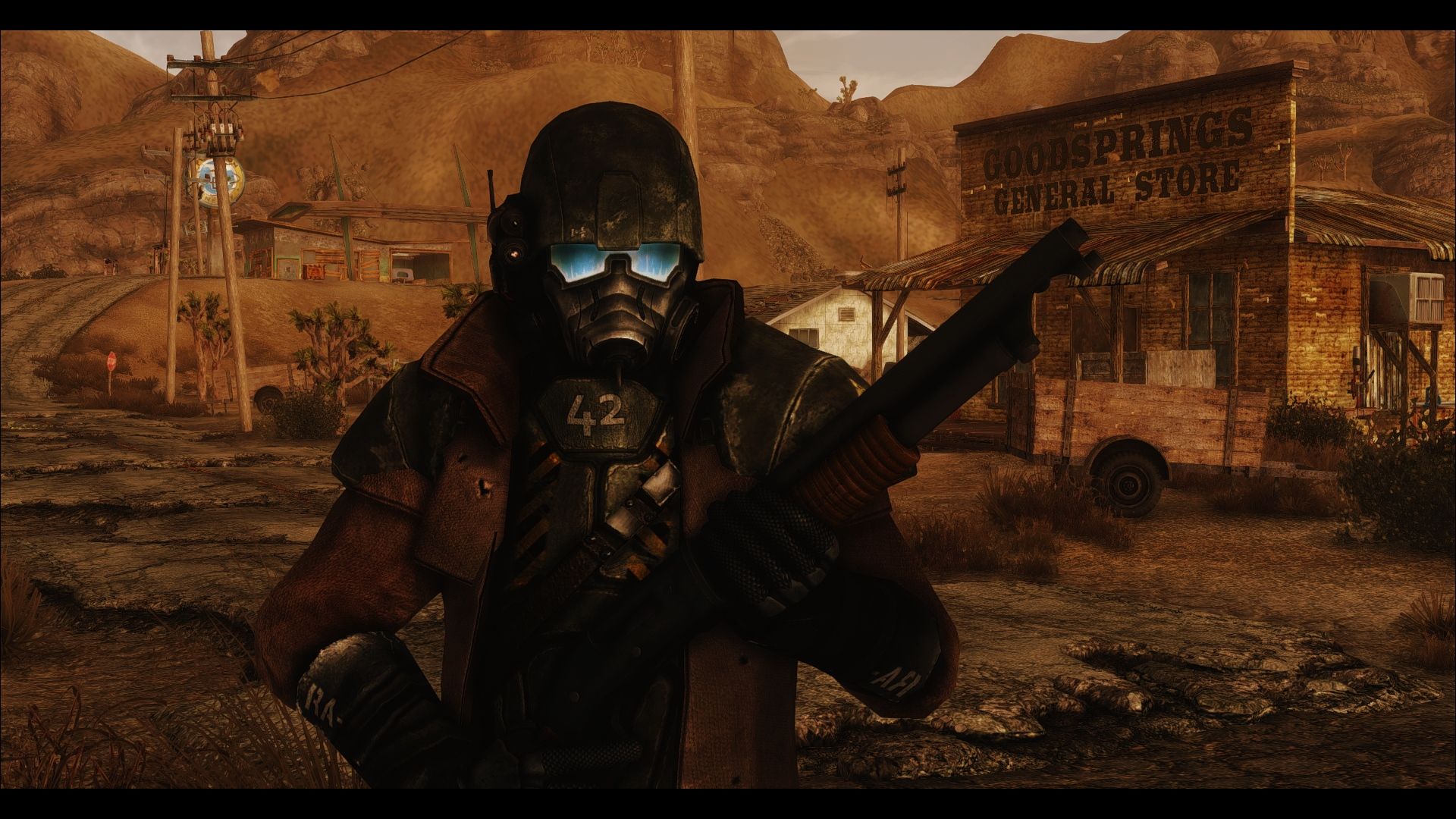 Many players will stay away from shotguns, especially early on in the game as they don’t feel they take down enemies as quickly as other weapons. However, by picking this perk, shotguns will immediately become more valuable.

When this perk is activated, a player using a shotgun will ignore ten points of their target’s damage threshold. This works for any ammo used with the shotgun. Shotguns become hugely powerful in a build that uses this perk, especially from the beginning of the game. 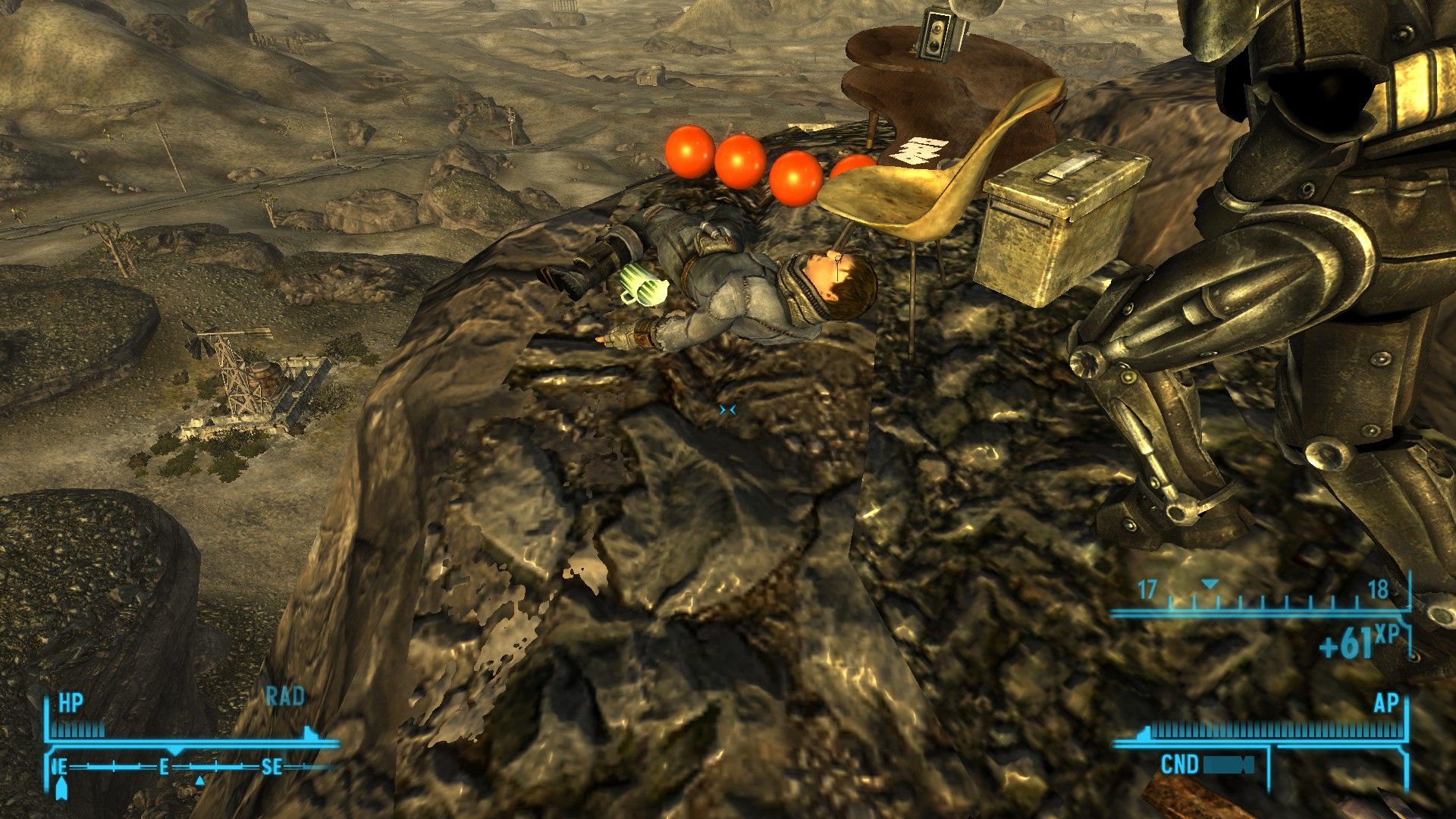 Fallout has always been known for its odd humor and style, something that fans have come to love. This perk adds in various Easter Eggs and strange encounters to the game for players to enjoy. While it can be fun to have these moments, many players feel that it is a waste of a perk.

If the developers wanted these to be a part of the core game, they should’ve just implemented them as standard, leaving the player a chance to pick the perks that will actually help them in-game. 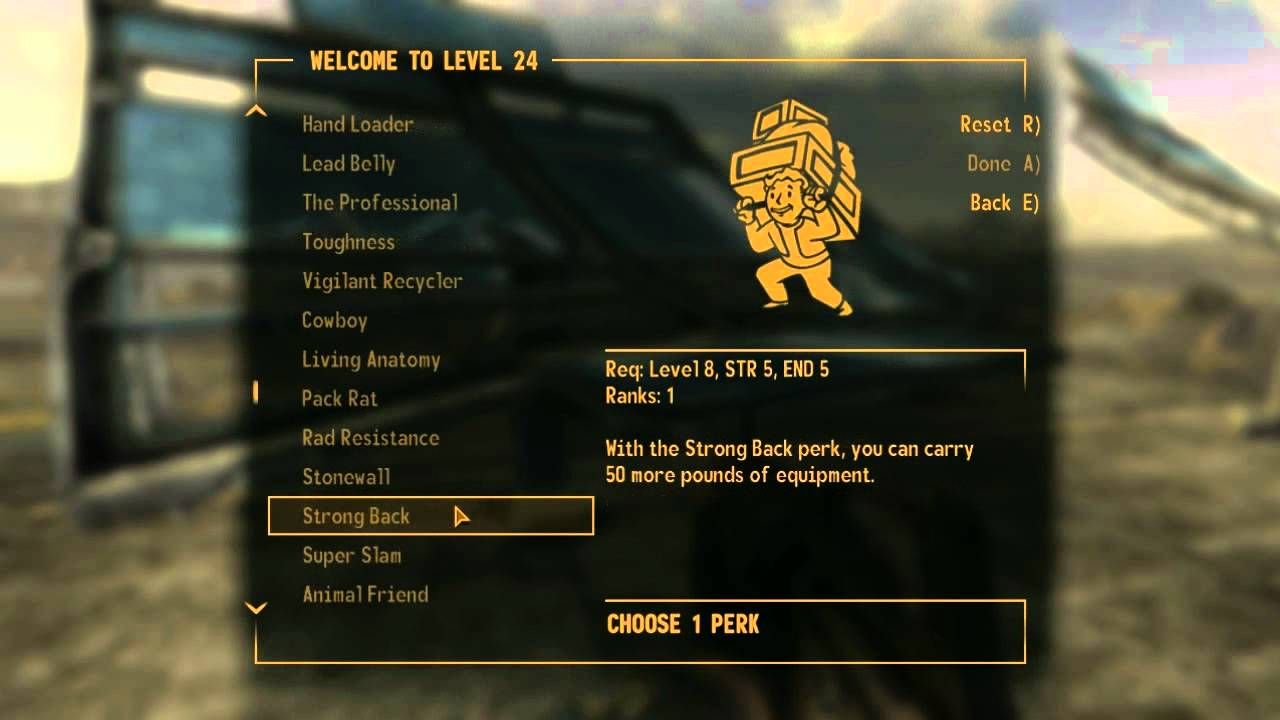 As the player ventures throughout the wasteland in Fallout: New Vegas, they will find various items they can pick up. From weapons to chems and everything in between, they’re going to need a lot of room to carry around everything they want.

This perk is a great one to activate from the beginning of the game, as it gives the player the ability to carry an extra 50 pounds of equipment. Anyone that has been caught short and become encumbered while foraging for valuables will know how powerful this perk can be. 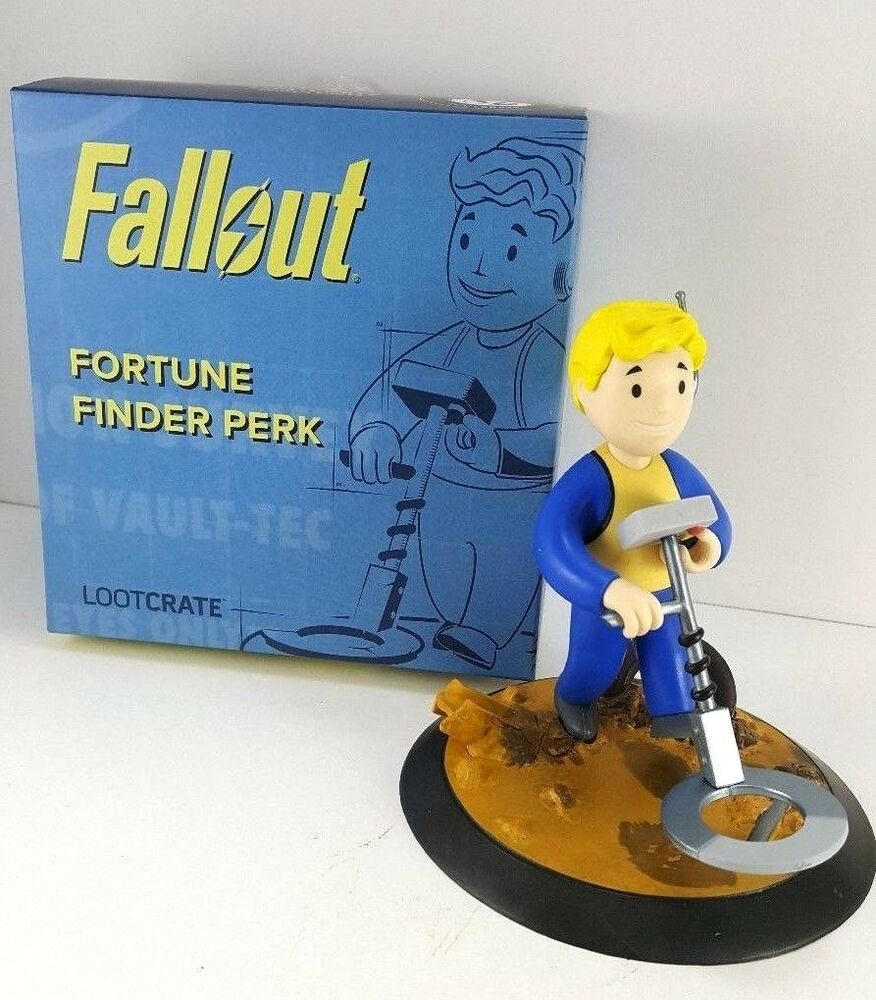 This perk allows the player to find more bottle caps while searching for the precious currency in the wasteland. While this sounds like a good perk at first, many players will find that they never run out or struggle for caps without it.

Those who have played the game more than once know that it is much better to pick a perk that will effect combat or travel over this one. Not the absolute worst perk, but definitely one of the worst out there. 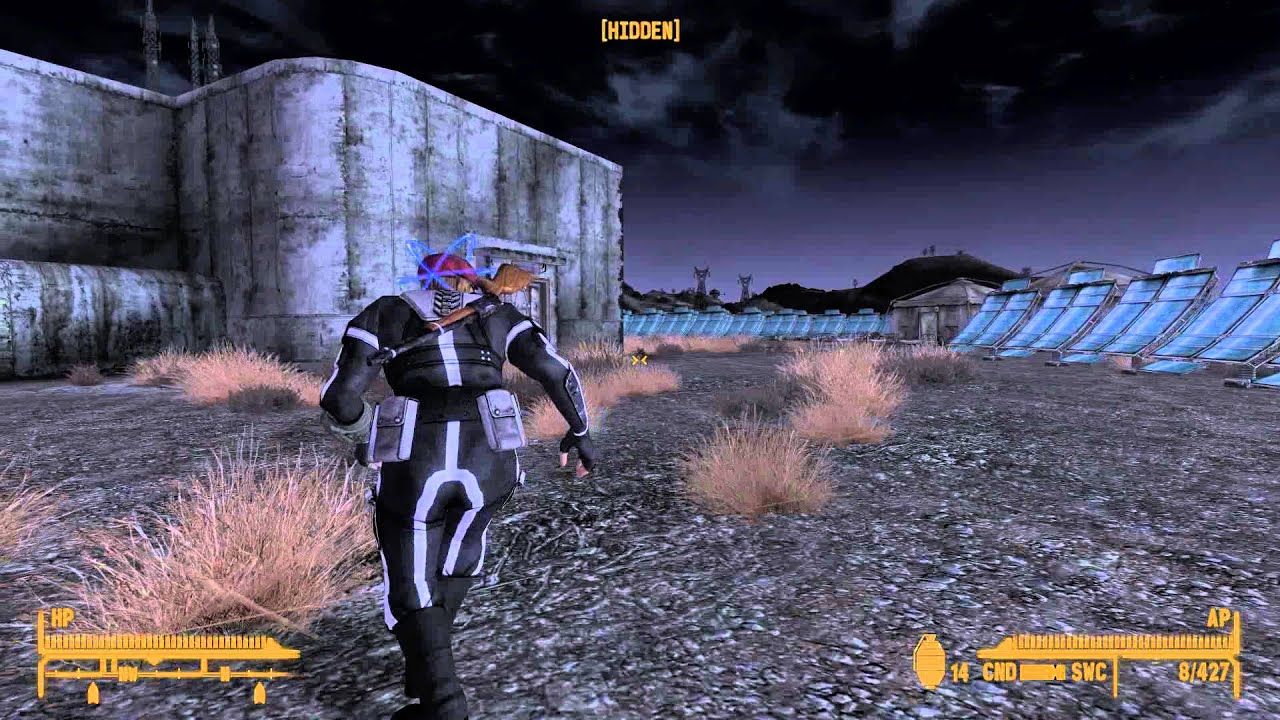 One of the most annoying things about trying to play as a stealthy character in Fallout: New Vegas is how slow the character moves when crouched. This perk is for those players that want to stay sneaky. Not only does the player gain +10 sneak, but they no longer have to worry about running when trying to get a sneak attack on an enemy.

By crouch running through a building and wearing the Chinese Stealth Armor, the player is virtually invisible to any NPCs. This gives them the chance to get Sneak Attack Criticals on every enemy in sight. 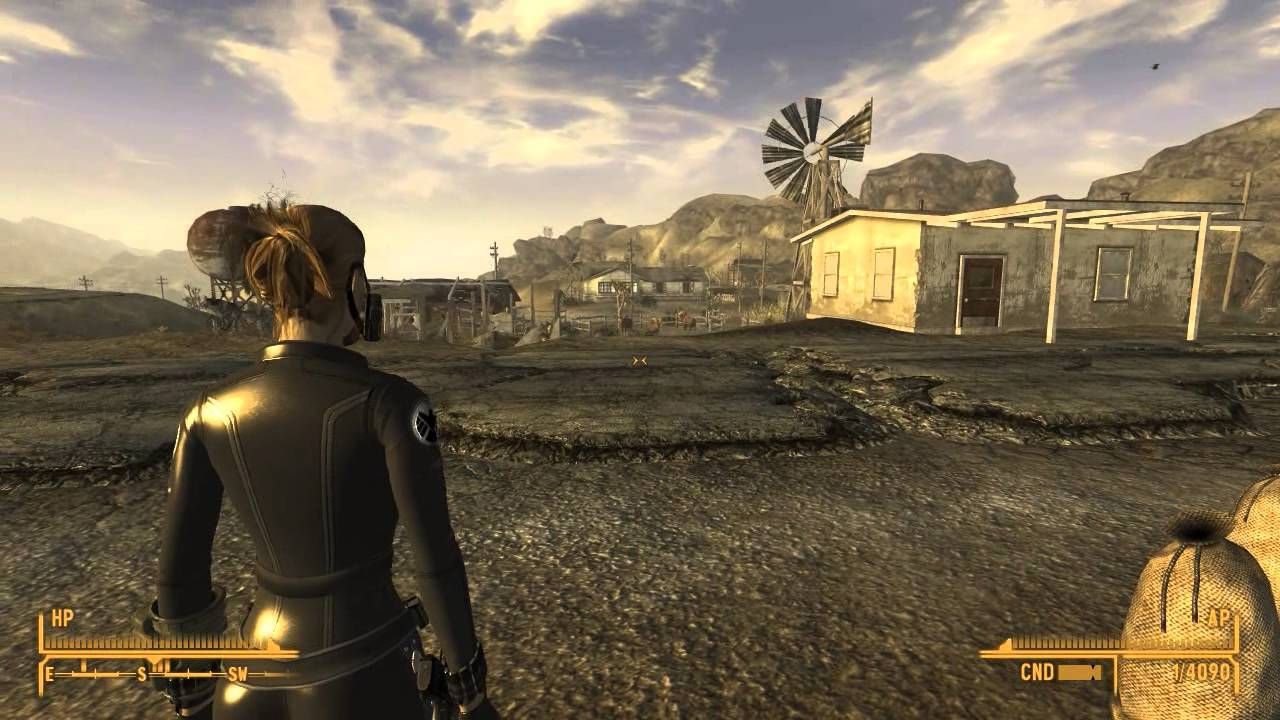 Traveling through a post-apocalyptic wasteland can be a dangerous thing, so it’s no surprise that players are going to want to be as careful as possible. This perk reduces the amount of radiation exposure inflicted upon the player.

Anyone that has played through Fallout: New Vegas will know that this is an incredibly situational issue. This means they can just use chems instead to get through a heavily irradiated area and not have to waste their perk on this one. 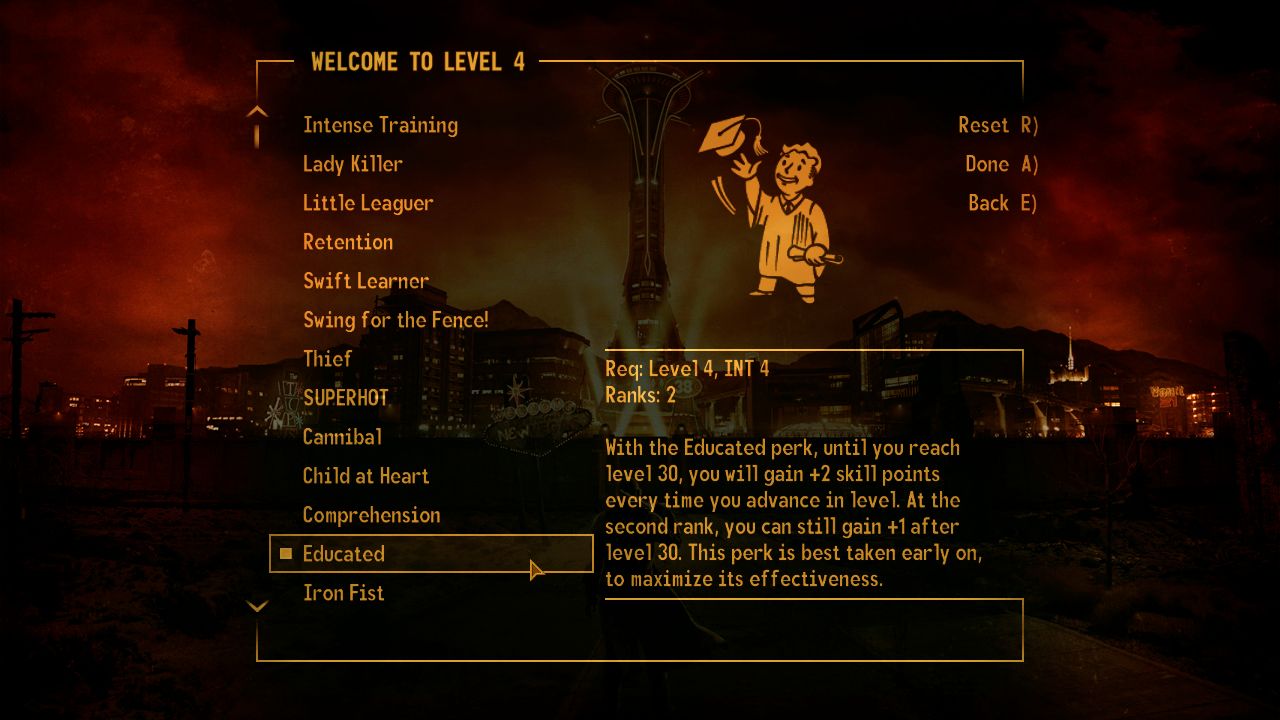 This is one of the absolute best perks available to the player, and they should activate it as soon as they can. This perk increases the number of skill points the player receives per level by two.

Overall, the number of extra skill points received in the game will be higher the earlier this perk is activated. Seriously, every single player of this game, no matter what their build, should be looking out for this one as soon as they boot up the game. 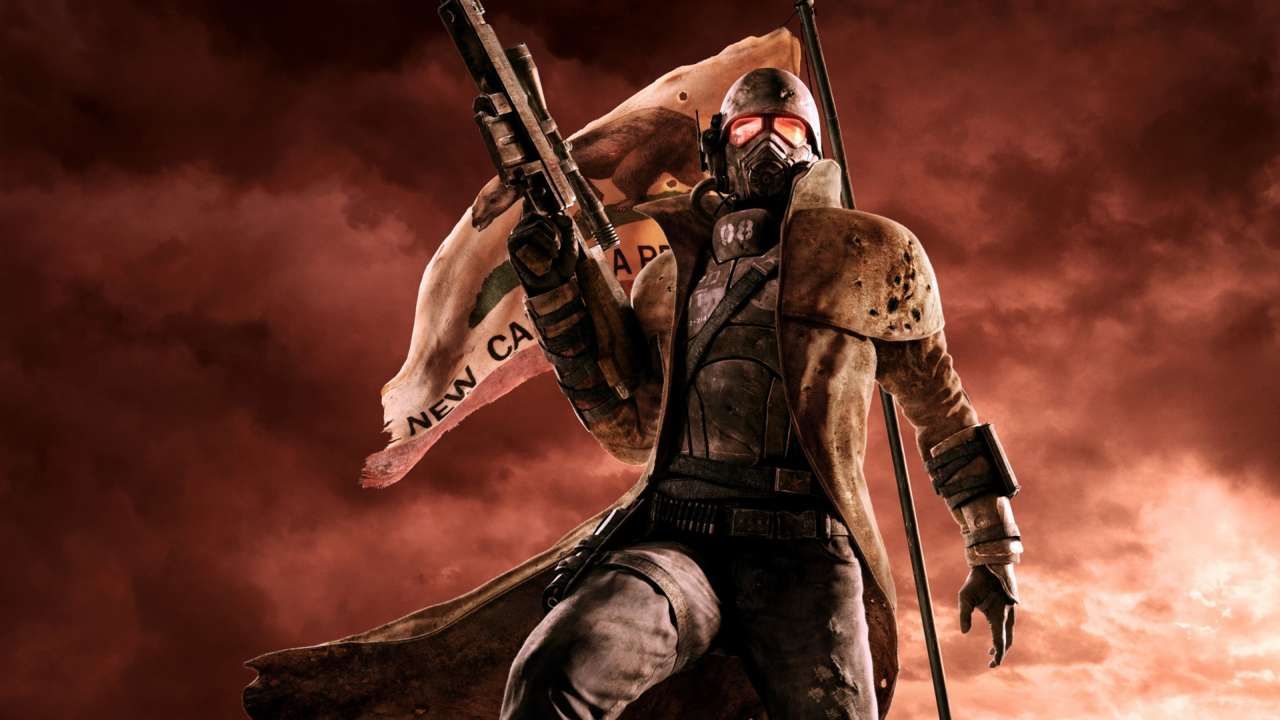 The concept of leveling being a positive concept in a video game no matter what has been drilled into our brains from a young age. It may feel counter-intuitive, but this perk isn’t something a player should be activating.

Yes, it gives the character a new level, but that doesn’t change the fact that it’s a complete waste. There are far better perks out there, so just wait until the levels come naturally and use up the precious perk points on something worthwhile and long-term. 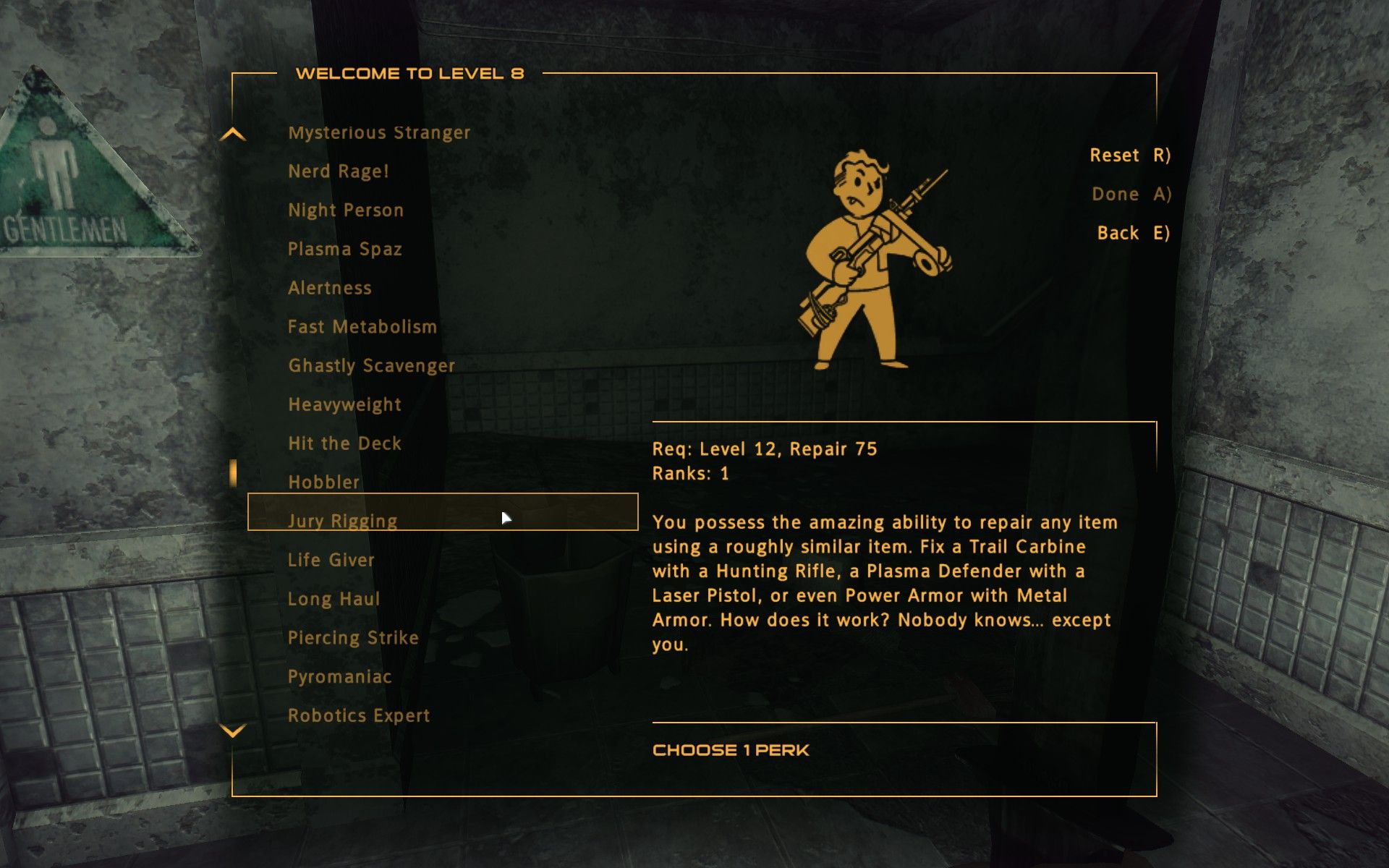 One of the things that many players forget to keep an eye on when they’re traveling through the wasteland is the degradation of the weapons. It will often sneak up on them, which is why it’s important to have a high repair ability.

This perk is great to have, as it means that they can repair a weapon with another from the same category, rather than from the same type. This will ensure that they’re never caught short in the middle of a battle. 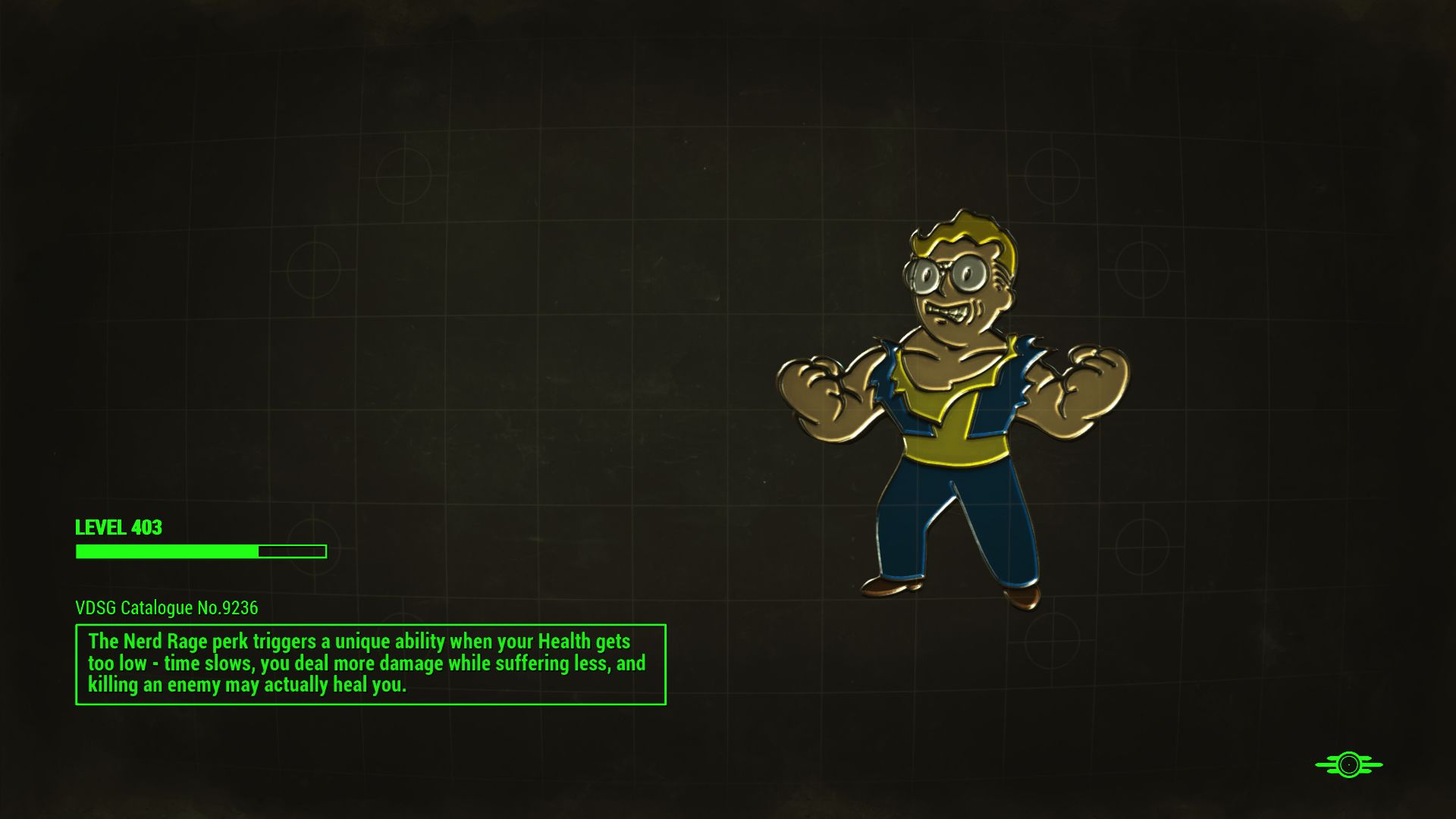 Anybody that has played any of the Fallout games will know that it’s not usual for a player to keep their health low. When they find themselves close to dying, they will ensure that they use a stimpak or a similar item to get it back up.

This perk only kicks in once the player character goes below 20% health, meaning that it’s unlikely to ever activate, and when it does, the player will quickly lose any benefits by healing themselves.