With glamour being the true endgame of Final Fantasy 14, it's no surprise that Goldsmith is a popular crafting job. Their items aren't just for show, though, they're important for stats as well. The jewelry items Goldsmiths make are part of every class's gearset. They also make weapons for several jobs, chiefly Monk and Black Mage. The materials for goldsmithing — ores, gems and whatnot — can get expensive, but it can be lucrative at high levels.

Getting any Disciple of the Hand job to the level cap is a long, arduous process. There's no way around the time investment, but there are better ways to approach the grind. Here's an outline of Goldsmith progression from Level 1 to Level 90, with gear updates and the best leves to take for EXP.

Getting Started And Leveling To 21 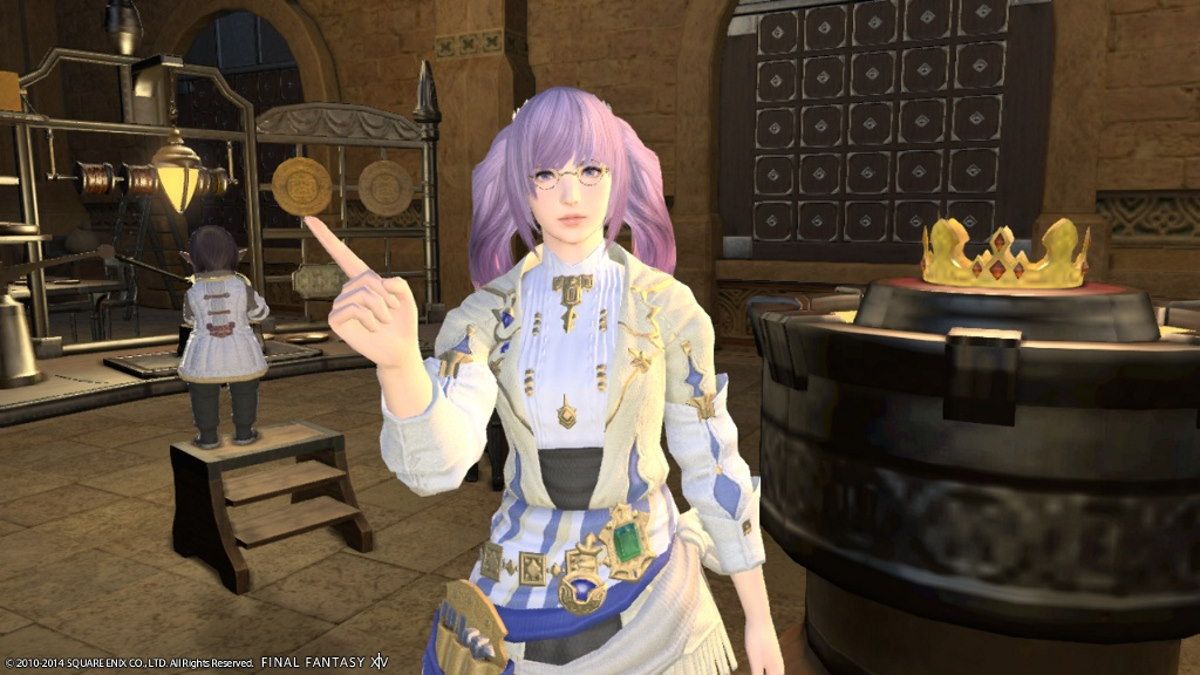 The Goldsmith's Guild is on the Steps of Thal in Ul'dah. You need to be at least level 10 in any one combat class to take the Way Of The Goldsmith quest.

Taking the quest from the Hyur receptionist gives you your first hammer, the Goldsmith's primary tool. Don't bother taking leves yet — the EXP gain for leves below level 20 is not great. For now, just focus on the job quests. Job quests will also give you a basic set of crafter gear if you don't already have one.

The Job Quests alone probably won't carry you to 20. To get EXP in between steps, you can grind the Copper Ingot and Copper Rings recipes. The Goldsmith's Guild sells Copper Ore for very cheap, and many other recipes use the ingots and rings as materials. You will get an EXP bonus when you craft a recipe for the first time, and when you craft an HQ item.

Crafting materials can get expensive at higher levels. You should level Miner along with Goldsmith so you can gather your own. Also, don't neglect your other DoH jobs — they all make materials and equipment for one another.

Now is the time to start caring about your gear. Disciple of the Hand gear boosts Craftsmanship and Control, letting you progress faster and gain more quality per action.

At Level 21, you should have an Iron Chaser Hammer, a Recruit's Grinding Wheel, and gear from the Initiate's and Cotton Crafting sets. You should have some of these pieces already from the Job Quests. If you don't, you can buy them from Yoyobasa and Gwalter, merchants on Ul'dah's Sapphire Strip.

Crafting gear, aside from primary and secondary tools, is universal to all DoH jobs, provided it meets the level requirement to equip it.

Let's talk leves. We're staying in Ul'dah until we hit Level 53 and start Heavensward content, so go find the levemete Eustace in The Quicksand (Ul'dah – Steps of Nald x:12, y:9).

For example, if a Charity leve asked for two Brass Ingots, you could turn in six to get triple EXP. Ingenuity leves give the most experience per item, but they need you to deliver the items to someone in a different area.

We won't be looking into Ingenuity leves since there aren't any past Level 50, but the option is there.

As you progress through the levels and make more demanding recipes, you'll find your gear getting outclassed. Check in with your local Tradecraft and Tool Supplier NPC to keep your Control and Craftsmanship up to par. Get some pieces from the Velveteen Coatee set at Level 26, and the Linen Coatee Set at Level 38.

Leves don't provide much money, and crafters are frequently in the red to begin with. It's always a smart idea to look at the Market Board to find something you can easily craft for a profit. The Market Board is also a great place to find gear, potentially for cheaper than what NPCs sell.

Your Grand Company has Supply and Provisioning Missions. These are very simple — just craft the items they want and hand them over. You will get a good chunk of EXP and company seals for doing this.

If you haven't completed the quest Rising To The Challenge from I'tolwann (Limsa Lominsa Upper Decks – x:12, y:11), do it now. Your weekly crafting challenges are easy to complete, and reward ten percent of your current level's EXP requirement. 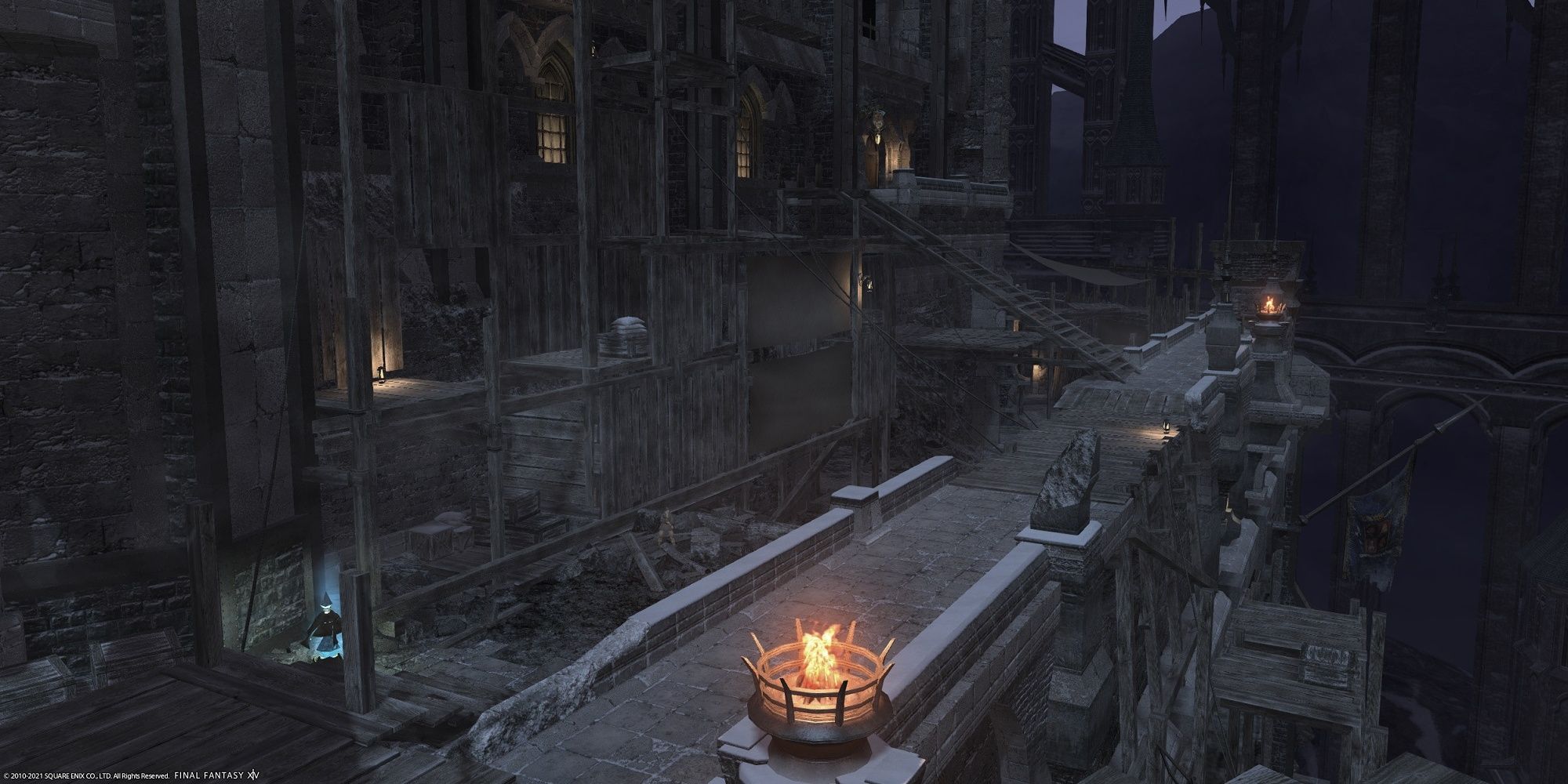 At Level 53, you can buy and equip the following gearset from Evrardoux and Norlaise in The Pillars of Ishgard: a Mythrite Lapidary Hammer, a Garnet Grinding Wheel, and the Holy Rainbow Crafting set. Later into Ishgard content, track down the Ramie Crafting set as well.

At Level 50, you'll unlock Collectables. Collectables are special items that you can craft and exchange for Scrip. This can then be spent on exclusive items. You cannot make HQ collectables — instead of the HQ percentage, using quality-increasing skills increases an item's collectability stat. Items with high collectability are worth more scrip.

The most important items to buy with scrip are the master recipes. Using these items unlocks crafting recipes that are required for certain leves.

Ishgard's levemete is Eloin (Ishgard – Foundation x:10, y:10). From now on, new leves are spaced out every two levels, instead of every five. Be warned — once you hit Level 50, your progression slows down drastically, as the EXP requirements to level get higher.

You'll also get access to large scale leves — they take ten leve allowances each, but give much more EXP than the equivalent small-scale quest. Taking them will save you tons of time.

Are you leveling Culinarian? Eating food will give you a temporary three percent increase to EXP gain — not much, but it adds up. You can also purchase Engineering Manuals at your local Grand Company Exchange or Scrip Exchange, which will give you a much larger EXP multiplier.

Talk to the handsome Roegadyn fellow in Umineko Teahouse in Kugane. Keltraeng (Kugane – x:12, y:10) is the Levemete from Levels 60 to 69. Get some new gear too — the Koppranickel Ornamental Hammer, the Stiperstone Grinding Wheel, and the Ruby Cotton Crafting set.

There aren't any more large-scale leves from this point on, sadly. So, it's back to regular Constancy and Charity leves. Don't forget to make collectables every once in a while — you need that scrip for master recipes and manuals.

If you are tired of doing leves, check your Crafting Log and look for recipes you haven't made yet. Each first-time craft comes with a sizable EXP bonus. Don't forget Supply and Provisioning Missions, either. 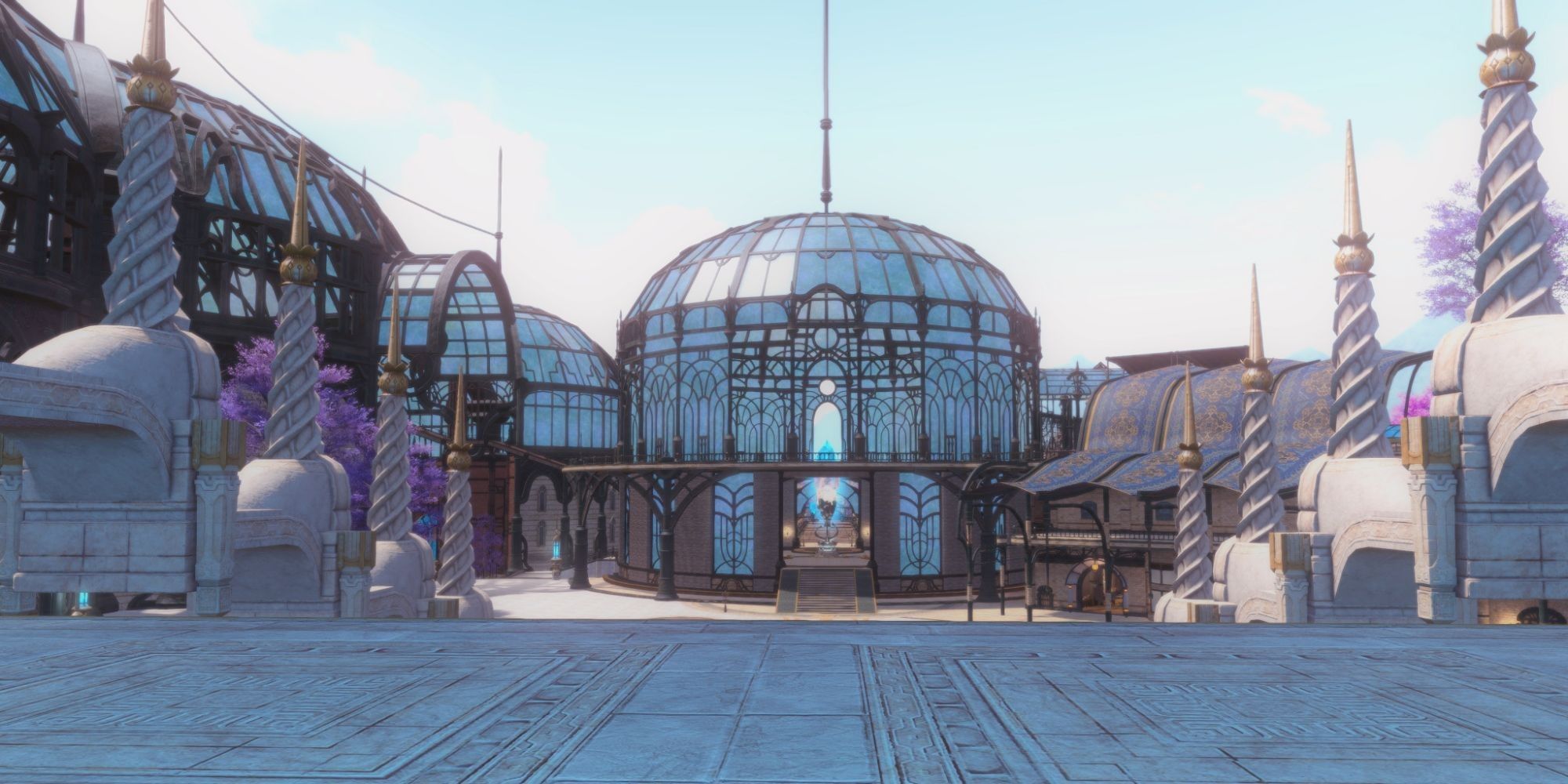 Next, teleport to the Crystarium. If you are at Level 71, you can buy the next tier of gear from NPC merchants: the Deepgold Cross-pein Hammer, the White Oak Grinding Wheel, and the Brightlinen Crafting set. Also look into the Ala Mhigan Crafting set on the Market Board — it may be cheaper than Brightlinen.

Once you progress to Shadowbringers content, you will unlock Crystarium Deliveries. These are quests where you have to craft and deliver specific collectable items. Completing a specific Crystarium questline will give you nine million EXP total. Note that multiple jobs are grouped in one questline – blacksmith, goldsmith, and armorer are all under Forging – and they can only be completed once. You cannot redo them to get the experience for another job. 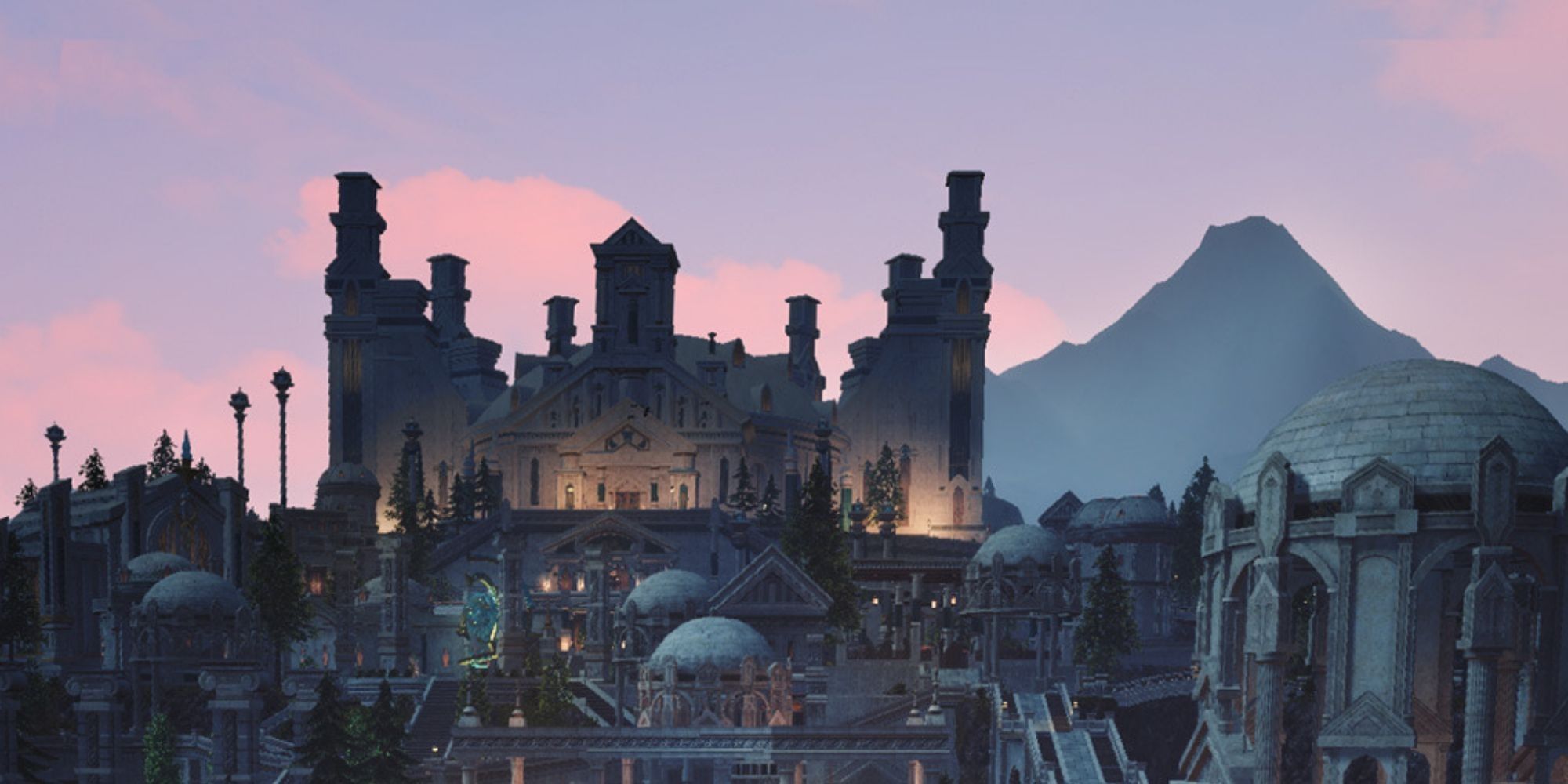 Before you leave the Crystarium, upgrade your gear for the last leg of the journey. Pick up a Dwarven Mythril Lapidary Hammer, Lignum Vitae Grinding Wheel, and the Dwarven Cotton Crafting set. The levemete in Sharlayan is Grigge (Old Sharlayan – x:12, y:13).

There are no Charity leves at Level 80 and above, only Constancy leves. Luckily, Sharlayan has its own equivalent of Crystarium Deliveries, called Studium Deliveries. They work the exactly the same way as the Crystarium questlines, down to the grouping of multiple jobs. Goldsmiths should talk to the Professor of Archaeology, Rurusha (Old Sharlayan – x:6, y:9).

You did it! At Level 90, you can craft the Rarefied Chondrite Needle, the Goldsmith's Level 90 collectable. Exchange it for special purple scrip.

You can use this purple scrip to get Level 90 artifact armor for Disciple of Hand or Disciple of Land jobs. For the Goldsmith, it's the Gemsoph's set.