Once you've explored the world of Athia quite a bit and accrued a lot of experience and power, one of the more satisfying tasks to complete in Forspoken is to return to previous areas and take on the Mutants there. These beasts, infected with the Break, are incredibly tough encounters that may as well be considered optional bosses.

There are nine Mutants inhabiting Avoalet, Prav's domain. As you may expect, many of them are weak to Sila's Magic, so you should be in a decent place to take care of a few of them during your first visit, though you might have trouble with a few of them thanks to the company they keep. 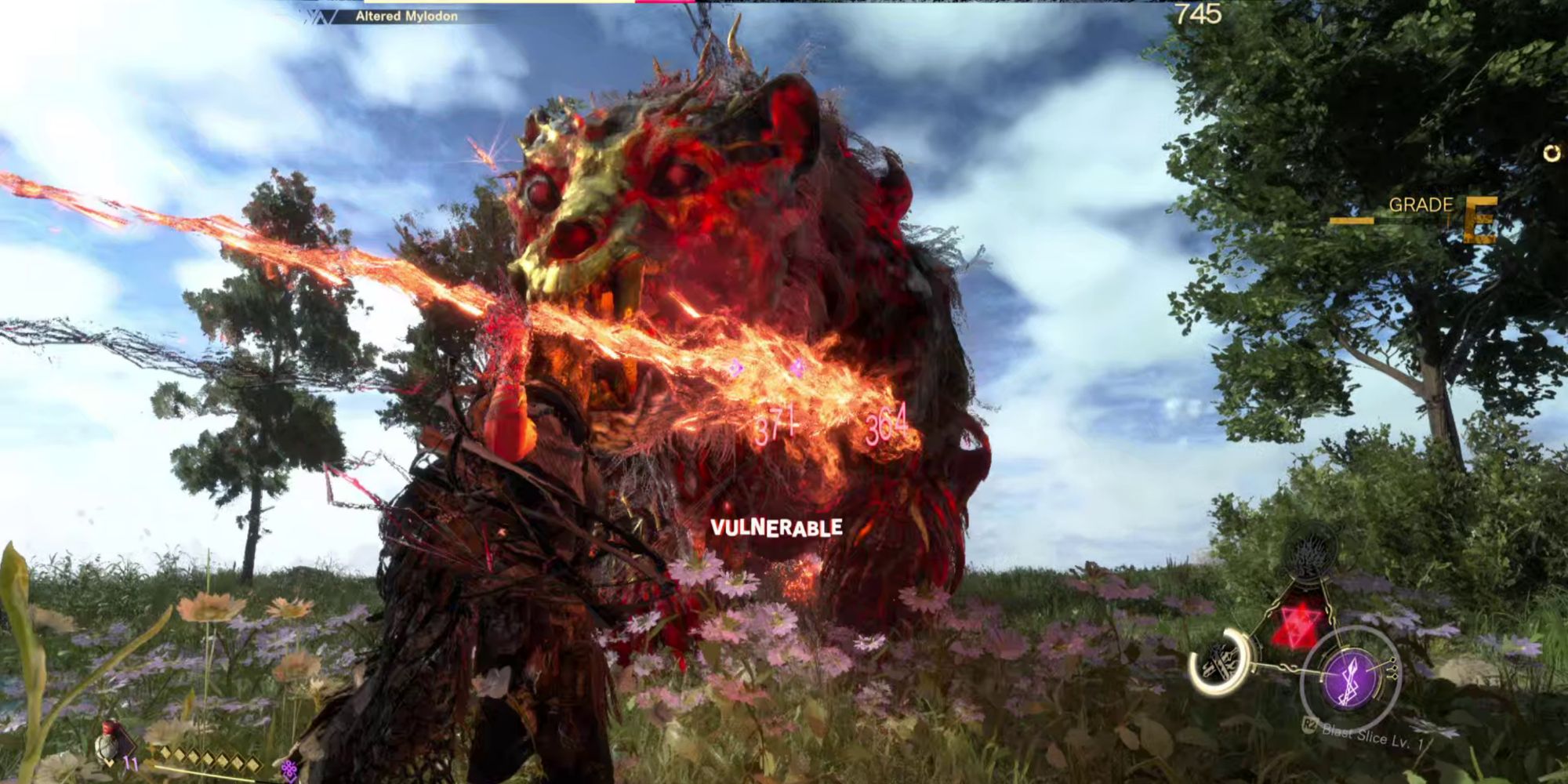 By the time you get to Avoalet, there's a good chance you've fought and defeated the Altered Mylodon in Cipal and Praenost, so you should be aware of what you need to do to survive.

This beast is very aggressive and loves to stay close to you. It has a Piercing attack that summons lots of rocks from the ground, can leap extraordinarily long distances, and has a devastatingly fast hip check that can knock you down to critical health very quickly if you get caught by it. As a result, it's best to take a defensive, ranged approach to this enemy – since it's weak to Sila's Magic, the Blast Slice spell is the perfect tool for the job. Boost up your Red Magic stat through upgrades and you'll be even more capable of taking the Mylodon down without much fuss.

When you beat the Altered Mylodon, it drops four Fervid Garlands. 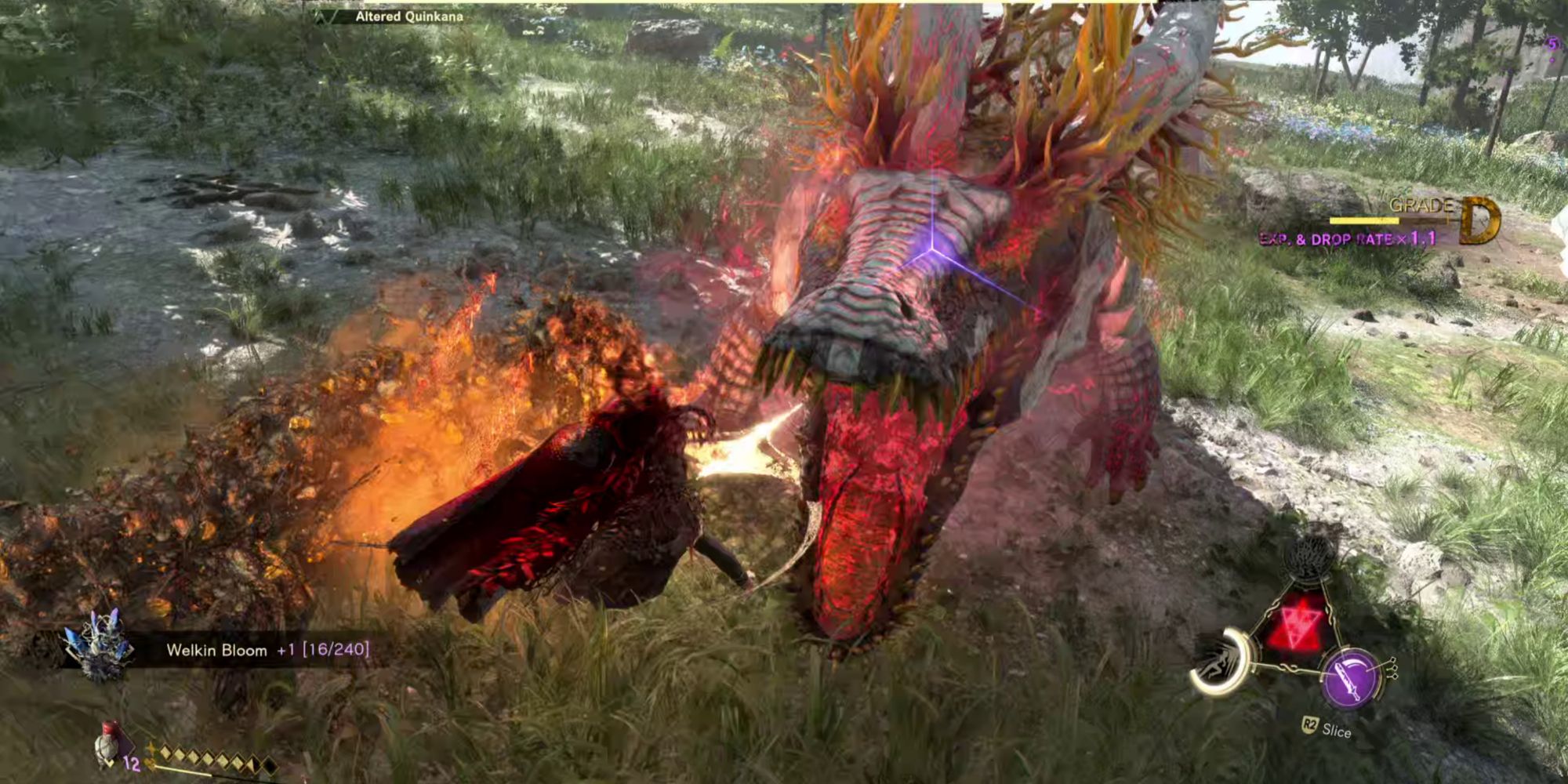 Despite usually being big, lumbering monsters, Quinkana have some pretty quick attacks that come out very fast, so you'll want to be on your toes when facing them. This Mutant fights alone, so it shouldn't be too difficult to run circles around it without much risk.

The Altered Quinkana's only weakness is to Sila's Magic, so make sure you're using that – this is convenient, as its attacks can cause strength debuffs, making Aegis invaluable. If you have the enhanced Aegis, you'll also get an attack buff when you use it, which will speed the fight up even more.

This battle is fought on a very flat arena, so you can fight without worry. A good strategy is to trap it inside a Crucible with you, summon your Legion soldiers, and then pump as much damage into the beast as possible with aggressive Rage Slice attacks. This should deal enough damage in a short amount of time to force the Quinkana to stumble, leaving it open for a Killer Move.

When you beat the Altered Quinkana, it will drop four Fervid Garlands. 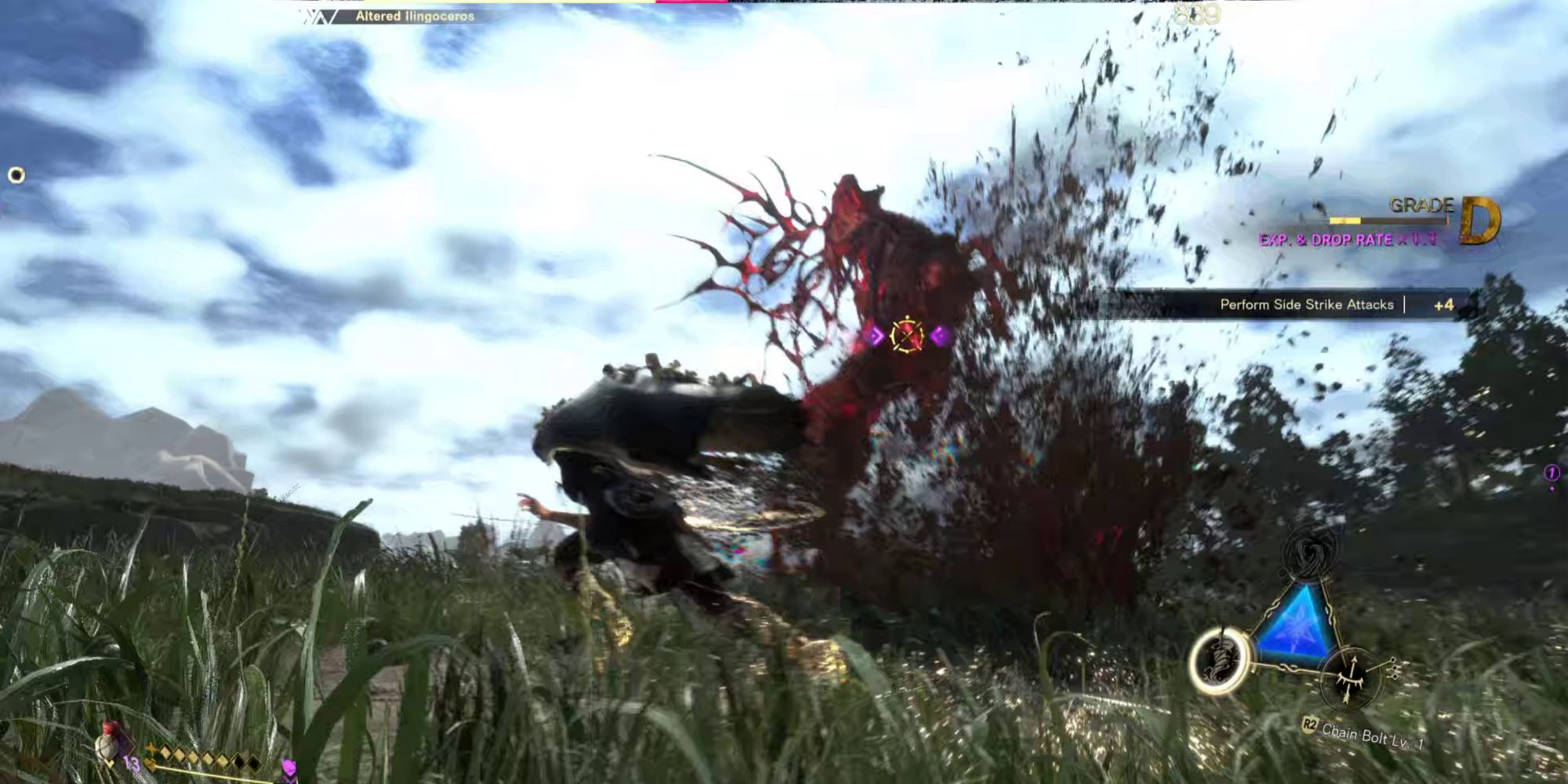 This overgrown deer is a tough cookie – it's one of the most agile Mutant types in the game and loves nothing more than to confuse you with bounding leaps across the battlefield and fast attacks. It's important to stay locked onto this Mutant at all times as a result.

If you fight this Mutant as soon as you have access to it, your only real attack choice will be Sila's Magic – if you decide to take the Ilingoceros early, it's best to use the close-range attacks over the long-range ones. Its most dangerous attacks are its ranged attacks, so keeping the pressure on the Ilingoceros by staying close is an easy pathway to success.

The Altered Ilingoceros's big Unblockable leaping attack will inflict a defense reduction if you get caught by it. Heal this immediately with Aegis to avoid any destructive attacks.

If you wait a little and progress the story, however, you'll gain access to Prav's Magic, which the Ilingoceros is weak to. While it doesn't have much in the way of close-range damage, Chain Bolt is quick enough to counter the Mutant's agility and Naedre's poison effect will help you deal damage while it's bounding away. 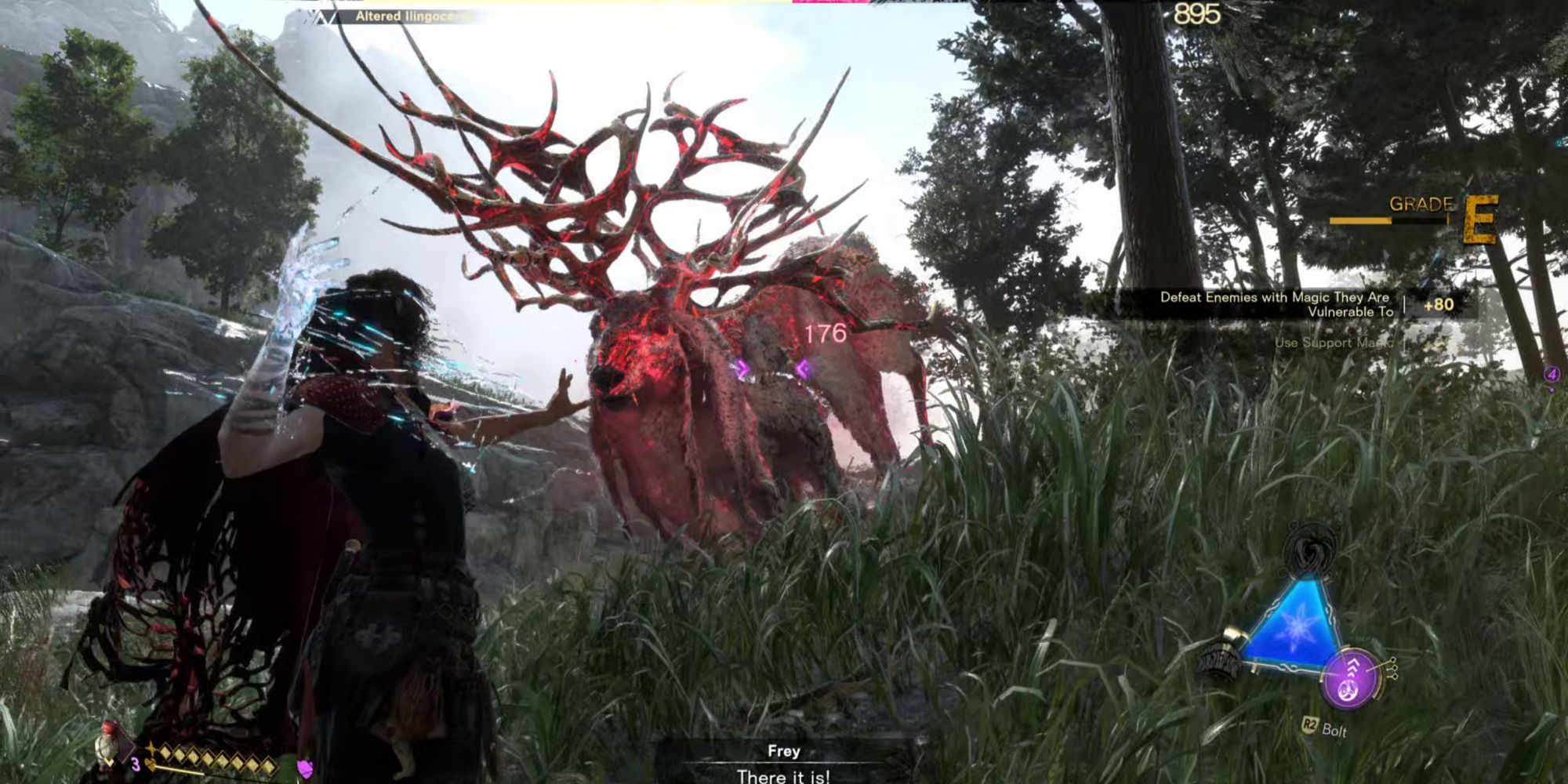 This Ilingoceros is the harder of the two fought in the Fountainfields as it's backed up by a pack of Merycodus. This makes the fight utter chaos until you thin the herd a little. While all the enemies here are weaker to Prav's Magic than they are Sila's Magic, it might be better to use your fiery spells to take out the Merycodus as the normal melee attacks are great for getting damage in between charged casts and Crucible makes for a great way to gain control of the battlefield.

Once you manage to get the Altered Ilingoceros alone, the battle plays out much like any other Ilingoceros fight. See the notes in the section above for our tips for dealing with this monster. 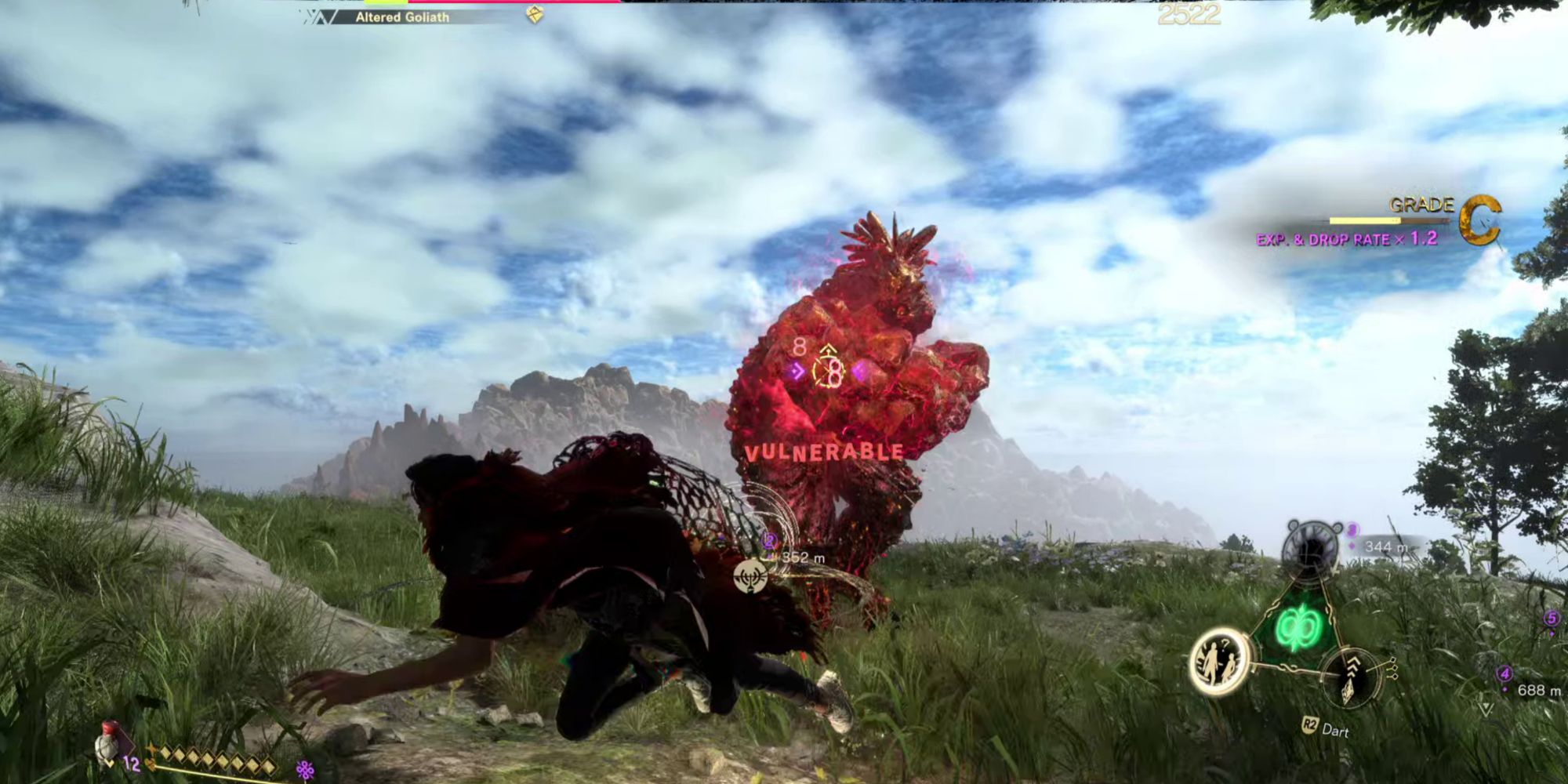 As Goliaths have a passive health regeneration effect, you'll likely want to wait until you've obtained Prav's Magic before even attempting to take this monster on. This is because Naedre, one of Prav's Support Spells, completely neuters the health regeneration effect (in addition to applying a poison ailment). Keep Naedre working at all times, but be sure to only reapply it when the poison runs out to save yourself being caught on cooldown.

The Goliath isn't too tough once you've dealt with its regeneration. It has hard-hitting attacks, including a ranged projectile, a leaping smash, and a particularly insistent rushing attack, but they're all rather obviously telegraphed, so just stay out of the way.

Try to aim your attacks at the back of the Goliath's head, which is its weak spot. Chain Bolt is the best tool for the job until you unlock Olas's Magic.

You'll get four Lucid Garlands after beating the Altered Goliath. 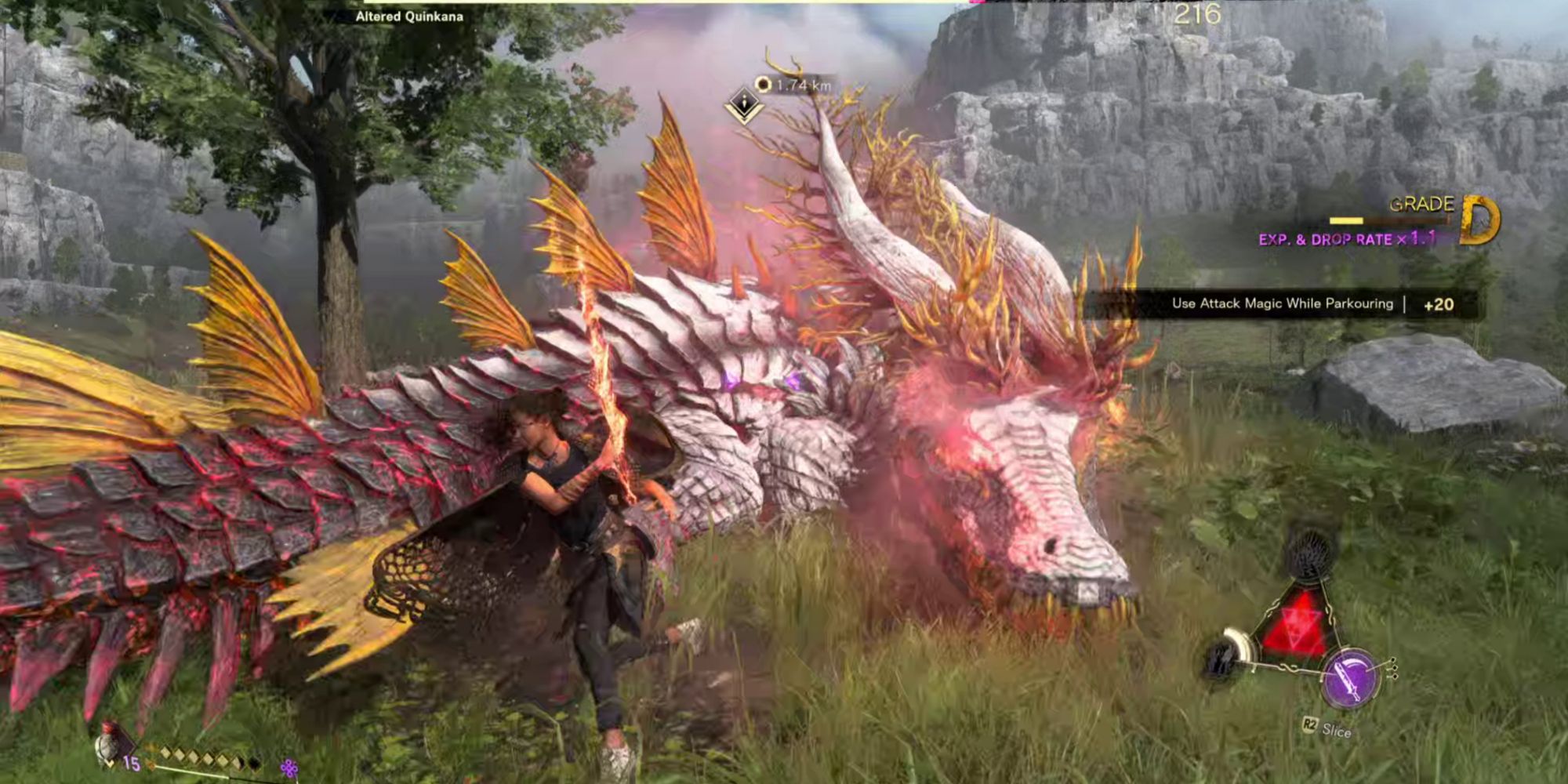 This Quinkana is backed up by a few Protosuchus, so you should be on your guard during the first few moments of the fight. You should definitely try to take out the Protosuchus first, as they are quite good at getting hits in while you are distracted by a bigger threat, i.e. the Altered Quinkana. Both the Mutant and the Protosuchus are weak to Sila's Magic, so that's the best choice here.

If you have Surge Magic readied before engaging, use this to try and hit every enemy at once at the beginning of the battle. This will significantly simplify the first stage of the fight.

Thanks to how slow Quinkana are, it shouldn't be too tough to take the Mutant down. If you're having trouble with its very fast attacks, try sniping it from afar with Blast Slice spells. 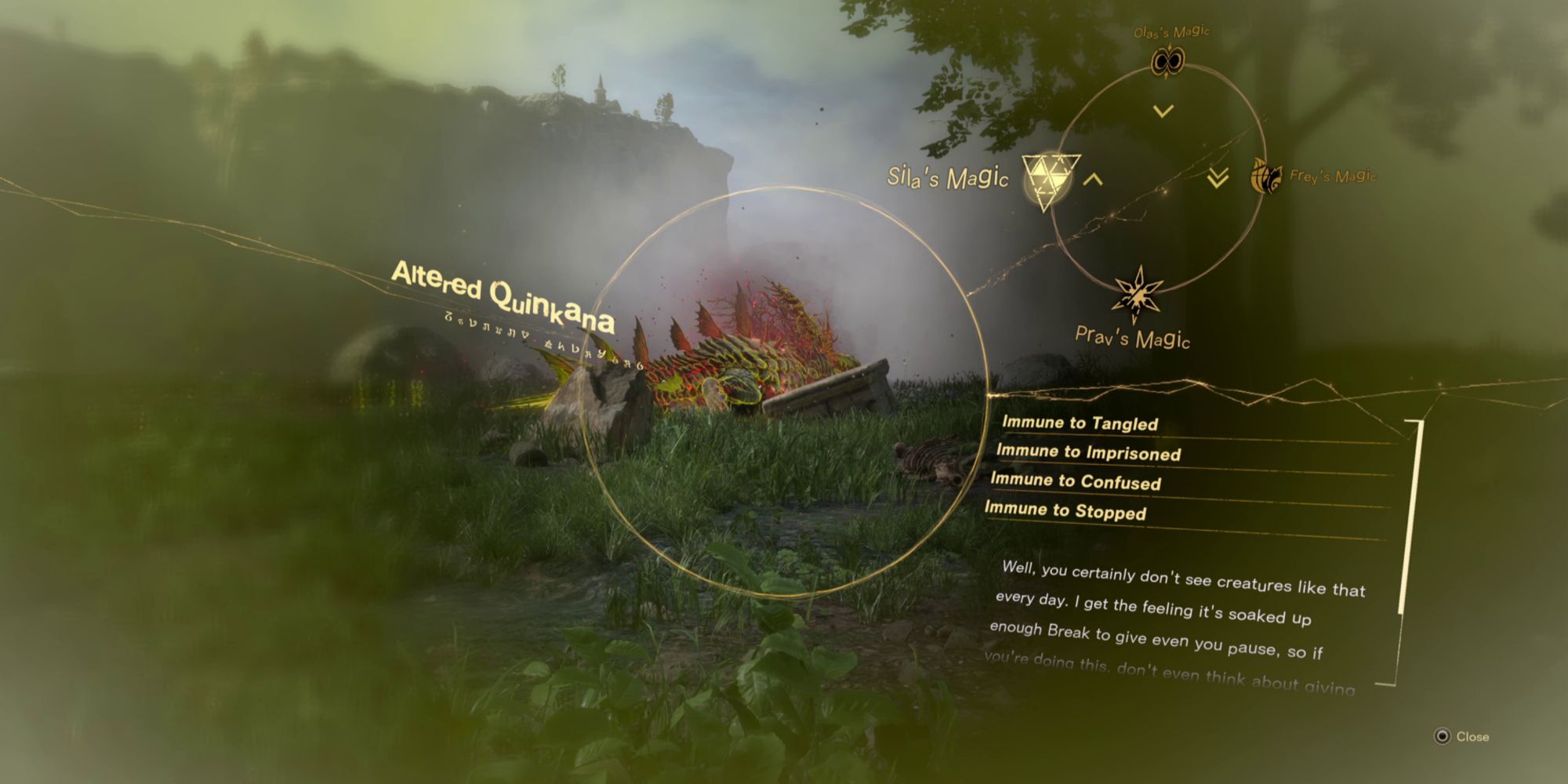 The Quinkana is a very slow beast, but its attacks come out surprisingly quickly. Its main trick is to perform a Piercing, very fast leaping attack at short distances. This attack reduces your strength, so be wary when it starts making its way over to you and have Aegis at the ready.

This Mutant is backed up by some Sebecus, which will complicate the fight a little. They're quite bulky, but also weak to Sila's Magic like Quinkana are, so keep the fire coming. Consider using Crucible to section off parts of the battlefield if you're struggling with the multiple enemies or need a breather.

Whether you're in The Misty Shore for the first time or you're returning after clearing this area as part of the storyline, you should have some equipment with high Red Magic values – make sure you're boosting your offensive stat as high as it can go and you'll have a much easier time of it. Remember, the sooner you defeat an enemy, the less time they have to cause you upset.

When you beat the Altered Quinkana, it will drop four Leaden Garlands. 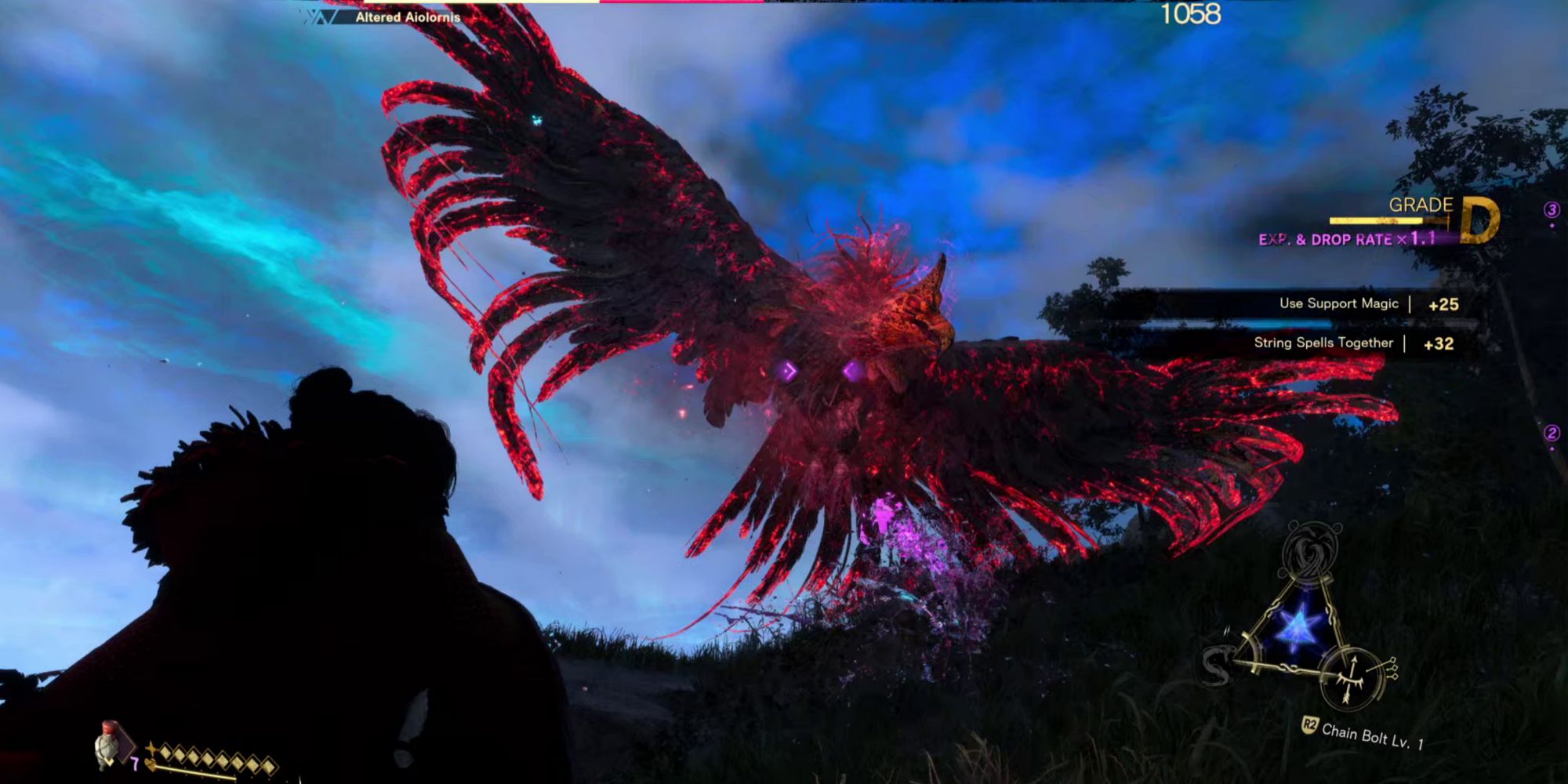 This is another Mutant where you'll benefit from waiting until you've acquired Prav's Magic before taking it on. The Altered Aiolornis loves to swoop around the battlefield, whether it's attacking or simply trying to make distance between you. As a result, Chain Bolt and its incredibly fast projectiles are the perfect tool for the job – doubly so since the Mutant is weak to Prav's Magic.

There are a few Breakzombies milling about near the Aiolornis, so take them out quickly at the start of the battle, or they'll just interfere. You'll be looking to the sky for the most part, so they'll have plenty of opportunities to interrupt you.

Be most wary when the Aiolornis gears up for one of its diving attacks – this attack is incredibly fast and can catch you off-guard easily. Counter it with an aerial attack and a fully-charged Chain Bolt to the back, if you can. 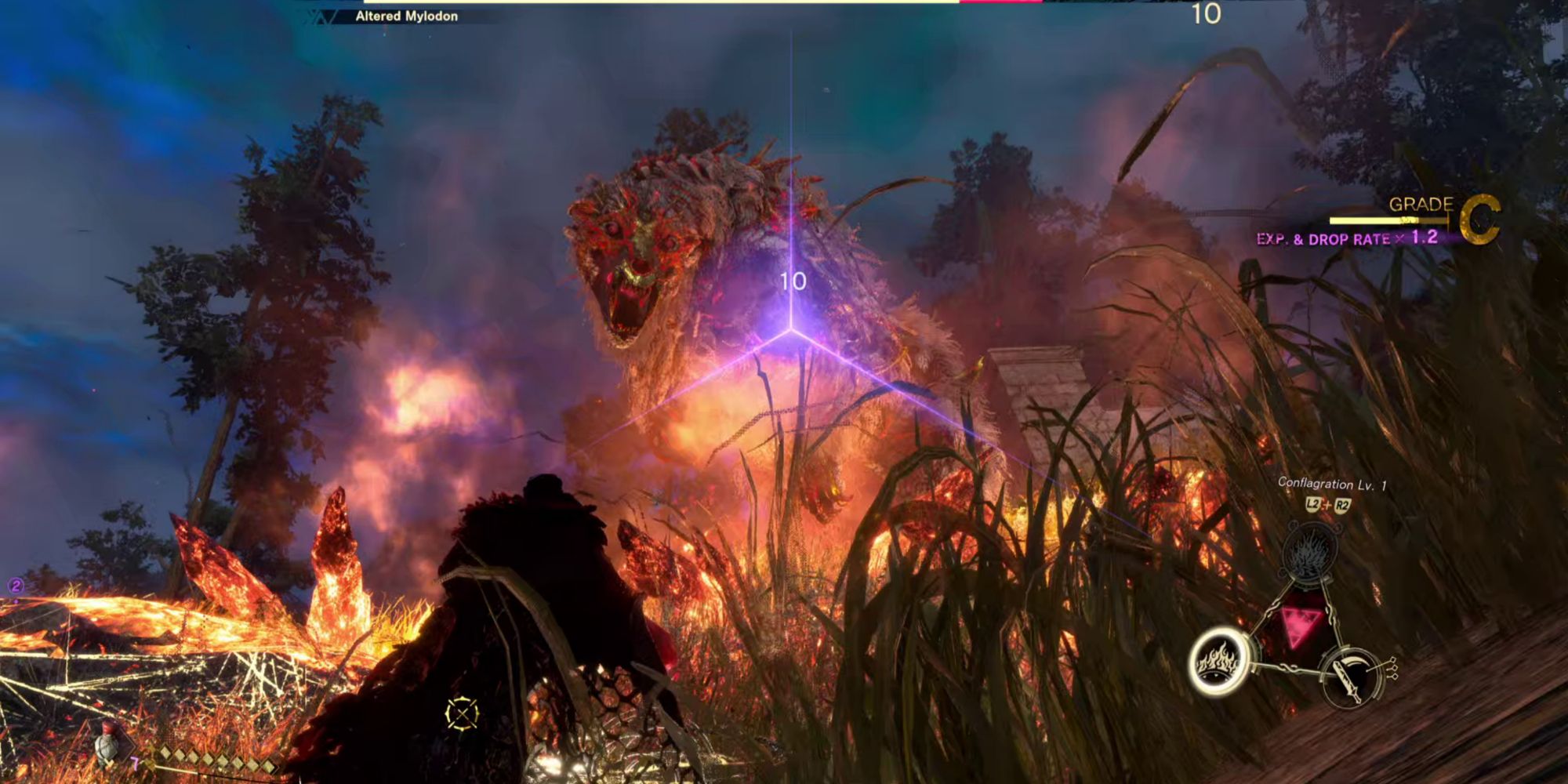 This battle is complicated by the presence of some Arctodus, but they have the same weakness to Sila's Magic that the Altered Mylodon does, which simplifies things. As a result, despite how hectic it will be at the beginning, it's rather easy to take out the Arctodus – the very small area available combined with how well Sila's Magic excels in close-quarters combat will make short work of the Mutant's minions.

Once the Arctodus are dealt with, taking down the Altered Mylodon is a simple task. Just stay aware of its ability to cover the ground in damaging rocks and try not to get caught at its side too much, lest you get caught by a hip check. Trapping the overgrown bear in a Crucible and then going to town on it will make short work of it, hopefully letting you get a Killer Blow, too.