“We wanted to try new things with Luminous Productions and in creating Forspoken,” Raio Mitsuno, Forspoken’s creative producer tells me. “We didn't want to stick to our traditions and stick to what we know. We wanted to break boundaries and try new things. This was almost an experiment in a way to say, ‘hey, let's get the story ready from the West and our development from our studio in Japan and see what comes of it’. I think it might become a trend, but we'll see.”

The idea to split development across the globe and have a Western team work on the narrative while the Japanese team handled development came from the studio identifying their strengths and weaknesses from past projects. Half of Luminous Productions worked on Final Fantasy 15 and other Final Fantasy titles, and they applied the lessons learned from these in the development of Forspoken, which follows protagonist Frey as she’s transported from New York to the strange fantasy world of Athia and gains magical powers.

“[In Final Fantasy] 15, the open world, or the knowledge of how to create an open world, and the RPG elements were something that we managed to realise quite well,” Takeshi Aramaki, Luminous Productions studio head and Forspoken director, explains. “We carried those over to Forspoken and improved and built on those where we could. On the other hand, the scenario writing was something where we thought we could do a little bit better or just see some improvements. That was where we really tapped into that Western talent for Forspoken, and we wanted to create this merged effort of the two approaches.” 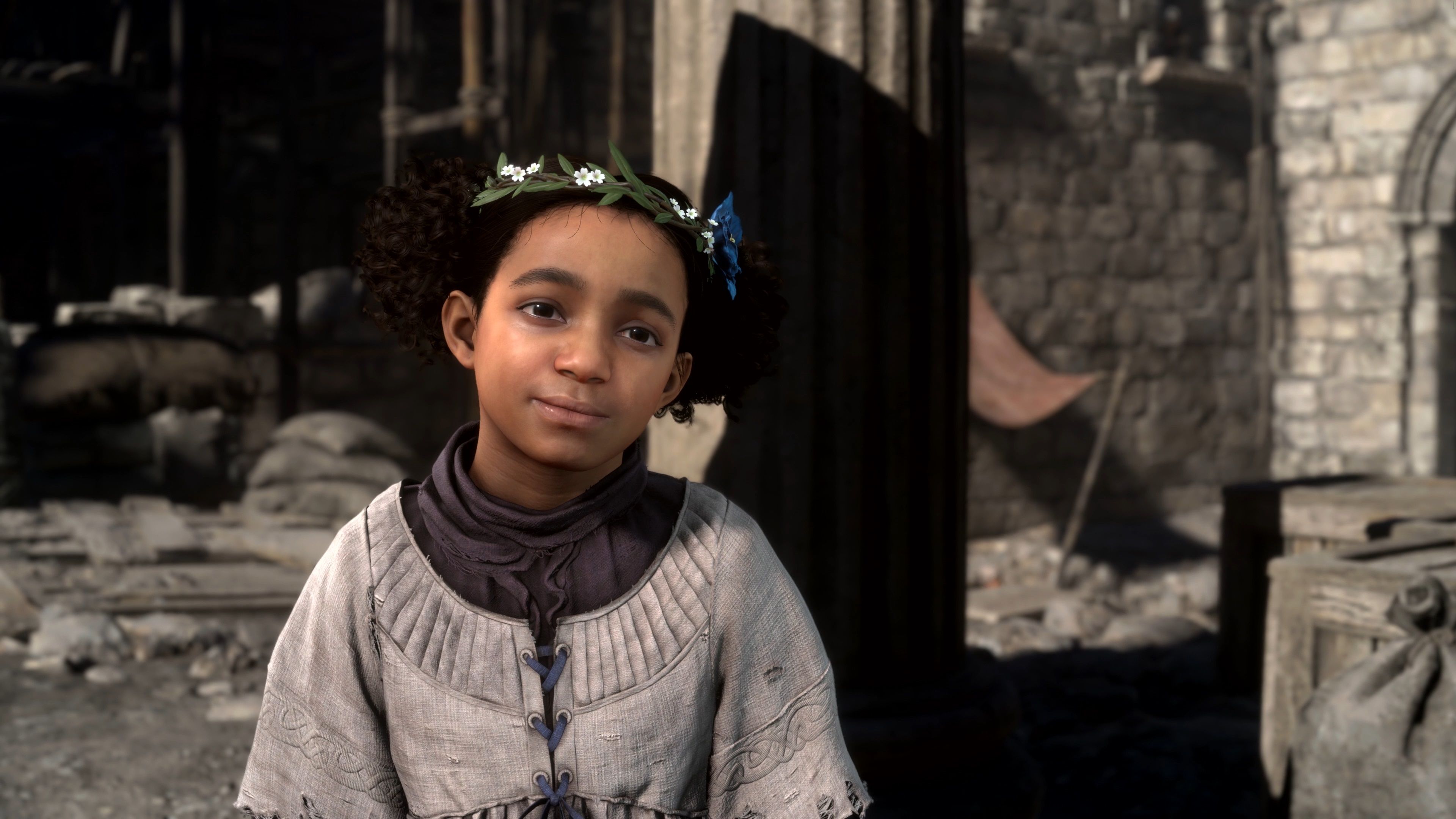 Trying a new approach when developing the game also came with new challenges. Mitsuno explains that for most Final Fantasy games, the primary language is Japanese, and then the games are subsequently localised into other languages. However, because the Forspoken story writers were Western, Luminous Productions decided to start with English first.

“For the majority of the team, we said, 'hey, the primary language is not the language that is native to you',” Mitsuno says. “So that was a challenge for the team in general, just doing things in a different order in terms of PCAP voiceover performances. We did everything in English first, and then we moved on to the other languages. It was a necessary challenge for us to undertake to make sure that the story that we're getting from the West was fully realised.”

Creating an entirely brand-new IP also brought fresh obstacles to overcome. Working on the Final Fantasy series comes with the benefit of having an extensive back catalogue of designs, features, and themes to draw upon. Forspoken was entirely new ground for the team, and it was important for them to make something that stands out from the crowd. 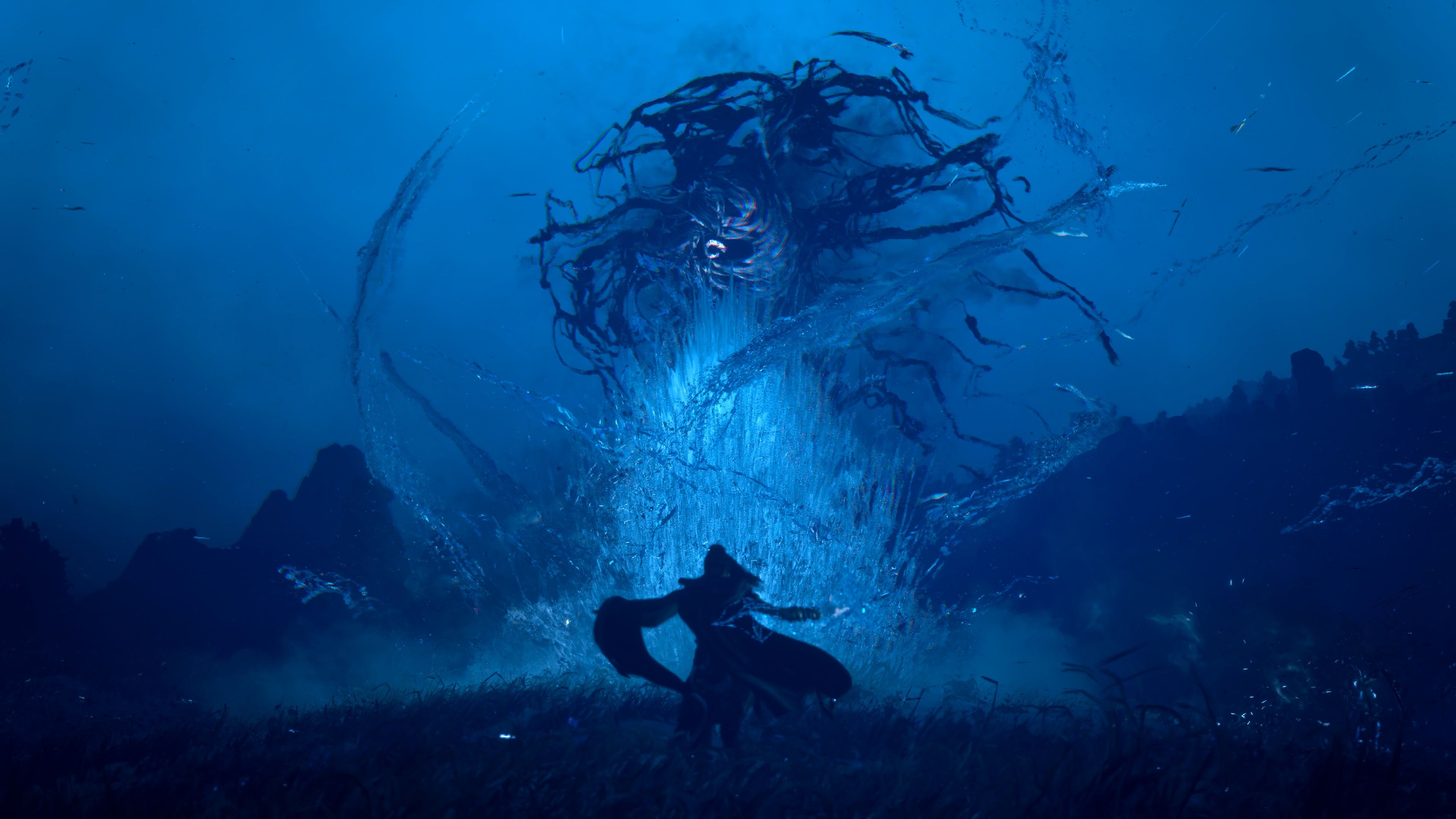 “Since we do have experience working on the Final Fantasy series, coming up with something completely new is a challenge. It's very difficult,” Takefumi Terada, Forspoken co-director says. “When you're thinking about creating a new IP, we wanted to create the best thing that we could but also something that was unlike anything else. From the pre-production stage, from the very early stages, we came up with all kinds of ideas. We really threw everything out there to see what we could come up with and what would stick, and the result of that was the magic parkour system and the magic combat system.

“The key point and what we really focused on was what would happen if you add magic into parkour, whether that's going super fast or jumping super high, we wanted to explore what you can't do with parkour in real life, and then bring that to life with magic.”

While the team has a strong history with Final Fantasy, they emphasised that Forspoken isn’t aimed at Final Fantasy fans, as they hope it will appeal to a more global audience rather than a particular subset of gamers.

The split development isn’t the only refreshing aspect of Forspoken either, as it features a Black protagonist – still all too rare in fantasy games. Interestingly, Mitsuno explains that Frey was the first character the team designed, but they started from the inside out, choosing her traits first rather than her appearance. 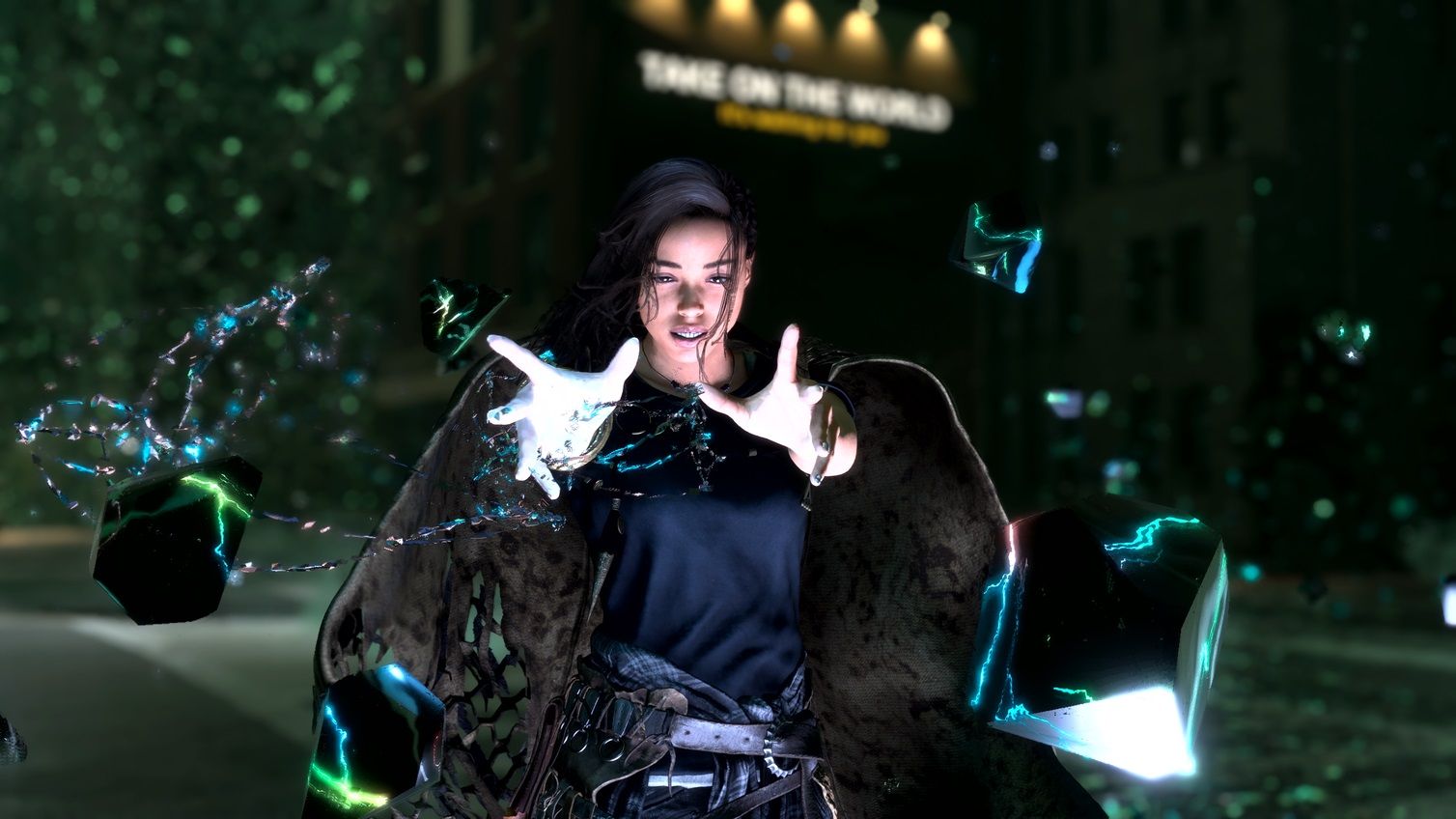 “She's a complex character, and Ella was able to connect with her and understand exactly what we wanted Frey to be like. Once we decided we wanted her to portray the character, we said, ‘You know what, let's design the character around her as well’. So we brought her into the studio, did 3D scanning, and modelled the character after her. It started from inside out.”

After designing Frey, the studio had to choose the perfect partner for her — Cuff. As an inanimate object, Cuff seems like a strange secondary character, though we have seen this before in the likes of Nier with Grimoire Weiss. Despite not having an expressive physical appearance, Cuff needed enough character to hold his own on screen.

“We needed Cuff to have a voice and a certain level of presence. Even though he may not be on screen — we don't see faces — we wanted someone that could play off of Frey and be a contrast,” Mitsuno says. “We know what Frey sounds like, we know how she talks, so we said, 'Okay, maybe Cuff is more of a dry, sarcastic, a calmer sense of humour, personality and the way they talk'. When it came to the casting process, Jonathan Cake fit that perfectly in terms of his voice and his delivery. They just have such good chemistry. There are so many subtle comedic moments in the game, and they play off each other so well. And even though Cuff is just a bracelet, Jonathan Cake was on set every day, standing next to Frey and talking, so that in the moment, there's that live interaction between them, and some of it was natural back and forth between them too.” 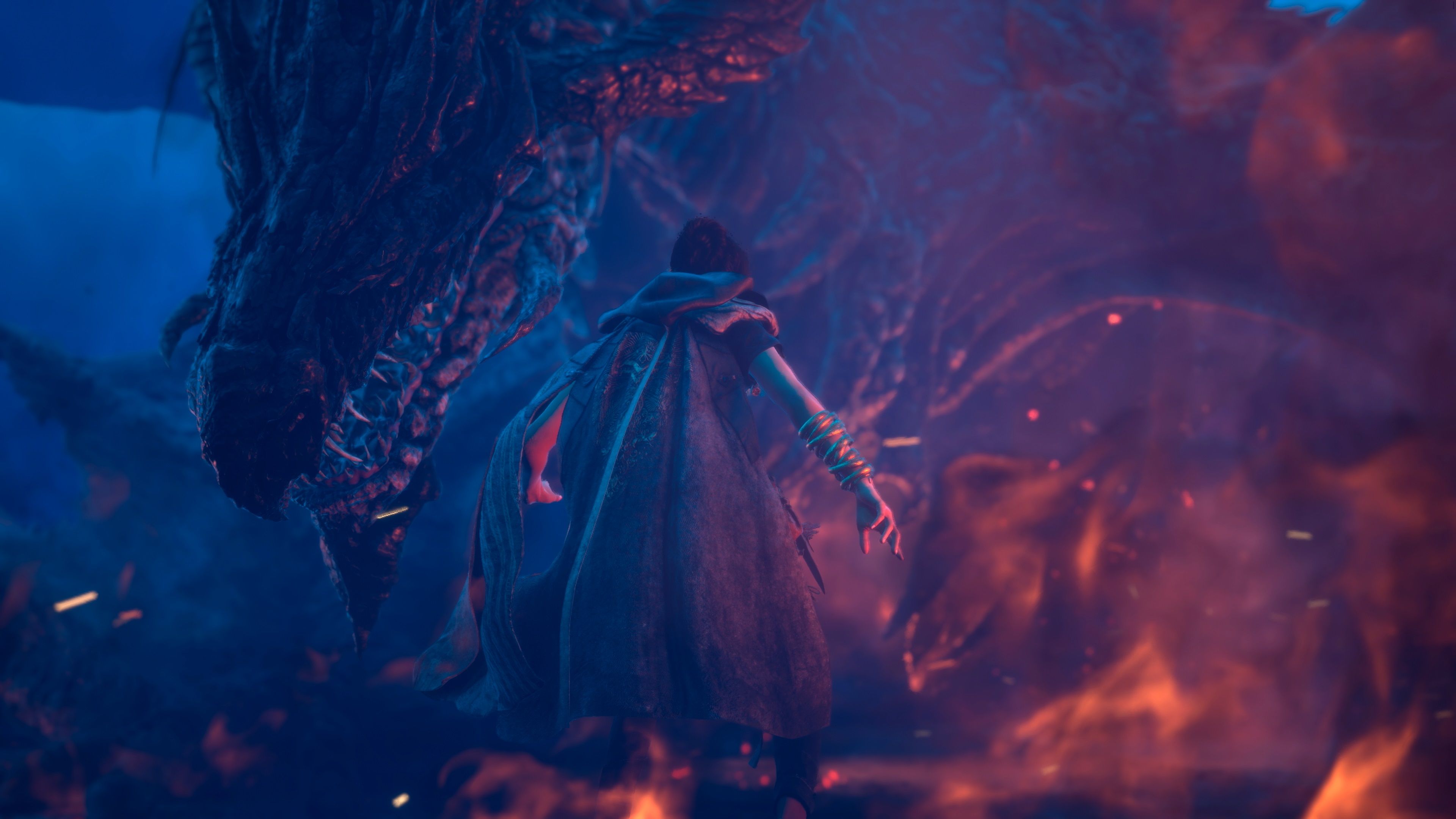 The comradery and humour that bounces between Frey and Cuff is a stark contrast to the grim world of Athia that players find themselves in. Mitsuno explains that the team worked hard to balance the character humour carefully with the more serious narrative. The game previously came under fire for its out-of-place generic dialogue in previous trailers and “hip-hoppy” stereotyping. Mitsuno described these trailers as "lacking the full context".

“It was a delicate but deliberate balance to match the colour and levity of the dialogue versus the generally dark outcome of where Athia looks like it's headed to,” Mitsuno explains. “Part of the reason for that is because Frey isn't from Athia. She's a character from our world that's been put into that position, so she's obviously not going to talk the same way that people in Athia would talk. She's going to react to things and point out everything that she sees because everything is so new to her.

“There's going to be a natural style of writing for Frey, as opposed to if we had chosen a character to be the protagonist that was originally from Athia. There's a very distinct difference there. We wanted to have this experience where there are moments of just kind of light-hearted banter, but then there are moments where things are a little bit more serious. It's an authentic, relatable story that we wanted to create. It was deliberate that we wanted a little bit of those comedy moments, but we've very delicately balanced how much of the serious versus how much of the fun.”

Forspoken launches on January 24, 2023 for PlayStation 5 and PC.