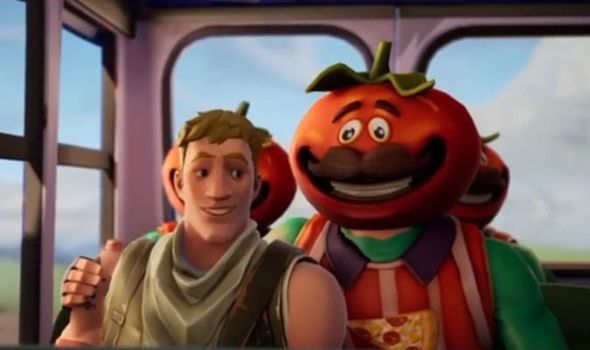 Fans are trying to work out if the latest Epic Games trailer is a teaser for Fortnite Season 11 or just a little joke.

Usually, Epic would start releasing special teasers for their next seasonal launch around this time.

Fans are expecting Fortnite Season 10 to end on October 13 and lead to some big changes to the game.

But so far, we haven’t received much in the way of clues when it comes to the launch of Fortnite Season 11.

That is, until today… Maybe.

Epic Games has released a new short trailer for Fortnite Battle Royale that provides very little in the way of fresh info.

It’s not even clear if this new footage is tied to Fortnite Season 11, or just a little joke with fans.

The new teaser focuses on the character Jonsey getting on the Battle Bus, to find it filled with Tomatoheads.

Luckily, there is one space left at the back and Jonsey cautiously takes his place next to a new friend.

The new teaser was released with the caption: “Jonesy arrives a bit late to the Battle Bus and makes a new friend.”

The theme for the end of Season 10 is “The End” something that suggests that Fortnite is set to undergo big changes.

Many believe this to be connected to a new map being released as part of Fortnite Season 11.

But the only connection that has with this new Epic Games trailer is that Jonsey is getting on the Battle Bus to go somewhere.

Which isn’t really that surprising, since that is how every Fortnite game starts.

Fans are still trying to work out what this new trailer has to do with Fortnite Season 11.

One user writes: “I don’t know what to make of this, but I love it.”

Another adds: “Looking closely, it doesn’t look like the current spawn island behind them. Not saying this confirms a new map but who knows, we can all hope.”

Whatever it does mean, hopefully, we will get a few more clues to make it more apparent in the coming days.

More hints are expected to pop up around the island, including sirens blaring out ahead of the Rocket Launch.

There may also be slight map changes leading up to the big Fortnite Season 10 end event.

This looks set to begin on October 13, at around 7pm in the UK. That means a launch time of around 2pm EST in the United States.

Fans are expecting another massive in-game event to kick-off which will be available to watch by jumping into a server.

There is still no clear indication when Fortnite Season 11 will start on PS4, Xbox One and PC.

Fans are hopeful that it might begin straight after the big in-game event, although that would mean extended downtime.