Fracked Wants To Be The Blockbuster Shooter VR's Missing 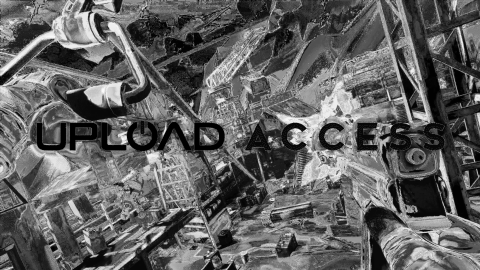 Fracked is our Upload Access game of the month! We’re kicking things off with a chat with nDreams creative director, Steve Watt.

Genre aside, Fracked is the exact opposite of what you’d expect from nDreams after last year’s Phantom: Covert Ops. That Oculus exclusive was a tense, realistic stealth experience with smart movement, immersive weapon handling and a gritty seriousness to its visual palette. My recent demo of Fracked, meanwhile, opens with a downhill ski chase, an avalanche right on your tail and an Olympic-level jump waiting at the bottom. And that’s all before you’re thrust into explosive run-and-gun combat high up in the mountains with soldiers possessed by alien parasites in a vibrant world pulled straight out of a comic book.

So yes, it’s a different kettle of fish. Like Die Hard, creative director Steve Watt reckons, just throw in some purple-skinned, screeching enemies that want to blow you up for good measure.

“When I first heard about VR, I wanted to be an action hero in the movies, and I thought VR would actually give you that experience,” Watt tells me. “When I think of action-adventure games, I think of Tomb Raider and Uncharted, and I think about what it would actually be like to be that character.”

And that pretty much gets to the heart of Fracked. What we’ve seen of the title so far feels reminiscent of an explosive James Bond action sequence sprinkled with setpieces that sometimes feel like direct nods to its gaming inspirations. You might’ve seen our Upload VR Showcase gameplay segment, which ended with a scene that would be familiar to any Uncharted fan.

But making a VR game that aspires to those explosive heights isn’t easy. Of course it isn’t — making any game isn’t easy — but Fracked also wants to find a path through the minefield of VR comfort options that others employ, and then it wants to dash directly through that path head-first. That’s somewhere only a few single-player shooters have gone so far; even Sony’s own Blood & Truth (the VR game Fracked feels more comparable to) regulated player movement, but this gives players full freedom of movement at any time.

“With Phantom, we really cared about the one-to-one experience of the canoeing, and I think other traversal methods was a big inspiration [here],” Watt says. “So we knew climbing worked really well in VR and also we’d created a skiing demo, and playing that skiing demo became so moreish.”

And that’s Fracked’s core loop right there: running, climbing and skiing. The latter two will help break up the game’s on-foot sections, but nDreams wants to keep its foot on the pedal throughout. In fact, it names its brand of quick-footed shooting ‘run, gun and cover’, referencing the importance of pushing the offensive and then, when you’re on the backfoot, quickly finding a safe spot to duck behind but physically grabbing onto it and pulling yourself to safety.

“This is a big part of the innovation in this game – run, gun and cover, two things that normally conflict with each other,” Watt explains. “It’s very much a run out there and shoot the AI […] and then what we saw as you were playing it was, when you start to become overwhelmed, you intuitively grab the cover and start to go for the respite and you start to heal.”

To maintain this speed, nDreams wants to streamline the experience to some extent. Remember last week when we spoke about Sniper Elite’s labored weapon reloading or, heck, even Phantom’s arsenal of stealthy but tricky firearms? You won’t see any of that here. When you need to reload, for example, the magazine just appears, hovering below the gun, ready for you to push in place and get back in the action.

Another ‘faffy’ aspect of VR can be comfort. As you’ve no doubt heard time and again, it’s vitally important to making sure games can be experienced by as many people as possible. And Fracked isn’t ignorant of that, but it’s also more trusting that players be fine with its breakneck battles than it is actively making sure they will be. To that extent, Watt points to features like the grab-based cover system, which he says “anchors” players in environments more naturally, or the importance of keeping players focused on specific objectives. Watt likens that to a little like keeping your eye on the horizon on a boat. “There were quite a lot of constraints or considerations about making it fast-paced for the comfort,” he says. “In a kind of way, if we knew we could solve that, then we knew we were onto a game that the audience was expecting.”

Of course, audiences expect a lot, and nDreams is bullish on the idea of delivering a console-quality shooter with Fracked. Watt says the game has “traditional campaign length” with evolving gameplay strategies and a story with strong characters. In that sense, Watt hopes Fracked will rub shoulders with some gaming greats. “I think of it sort of similar to a first-party title,” he says, “where you make blueprints for other games to build off. And so I want people to look at this game and go “Wow, you really can make super fun games in VR.”

We’ll have a lot more from Fracked and nDreams over the course of July. Keep an eye out for chats about the game’s art and music, a look back at nDreams’ history and growth and more. We’ll have a full schedule for you very soon.