In Genshin Impact, you can have all the desired 5-star characters you want but without the proper weapons, they’re just there for bragging rights about how lucky you are at digital gambling. The real pride comes in working hard for the weapons you put into their hands. Sadly, 5-star weapons can be as fickle as their character counterparts and so often, players will have to make do with what the game lets them have through perseverance.

Those would be the craftable weapons in the game. They’re only 4-star items but they ought to make do and are certainly better than trying to snipe those featured 5-star blasphemies in the weapon banners. As with all weapons in Genshin Impact, only a few are worth your time and if you want to have something that isn’t too far from 5-star weapons which represent the best potential, then these forged ones shouldn’t disappoint. 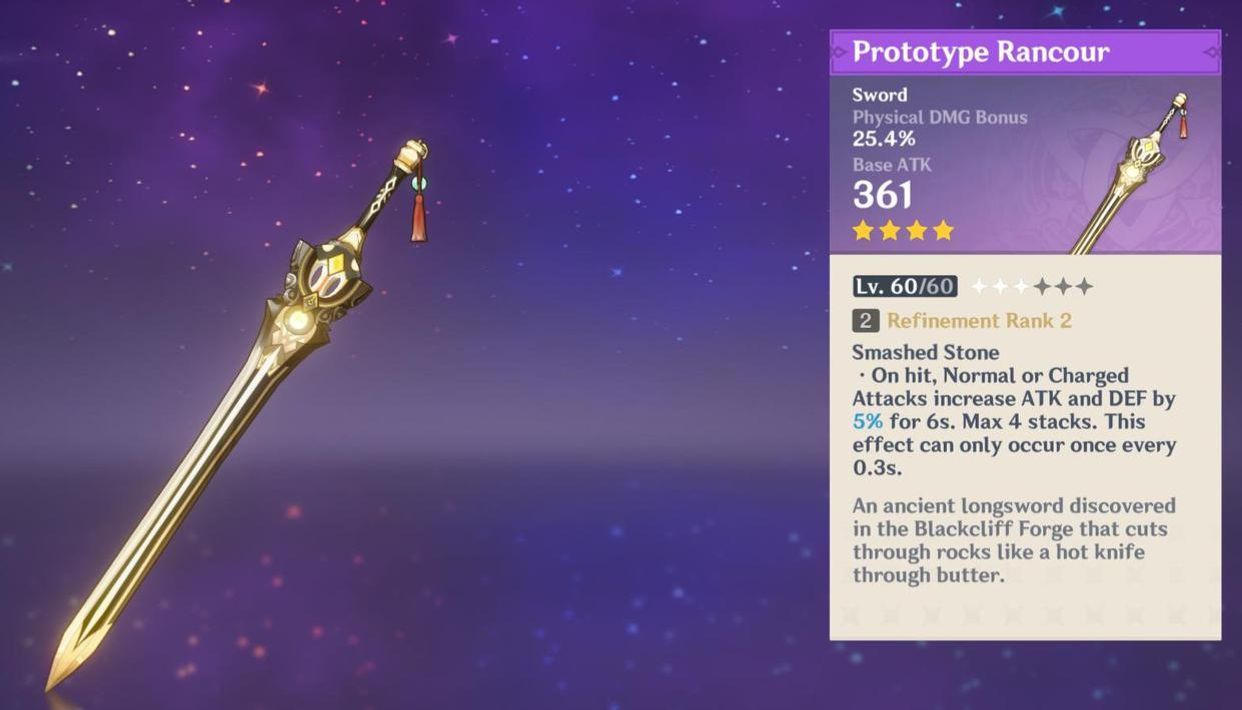 The only catch is that it has a Physical DMG Bonus as its secondary stat but that shouldn’t matter much, since most sword users either rely on physical damage for DPS or aren’t suitable for DPS at all. Crafting at least another one of these should do your party well. 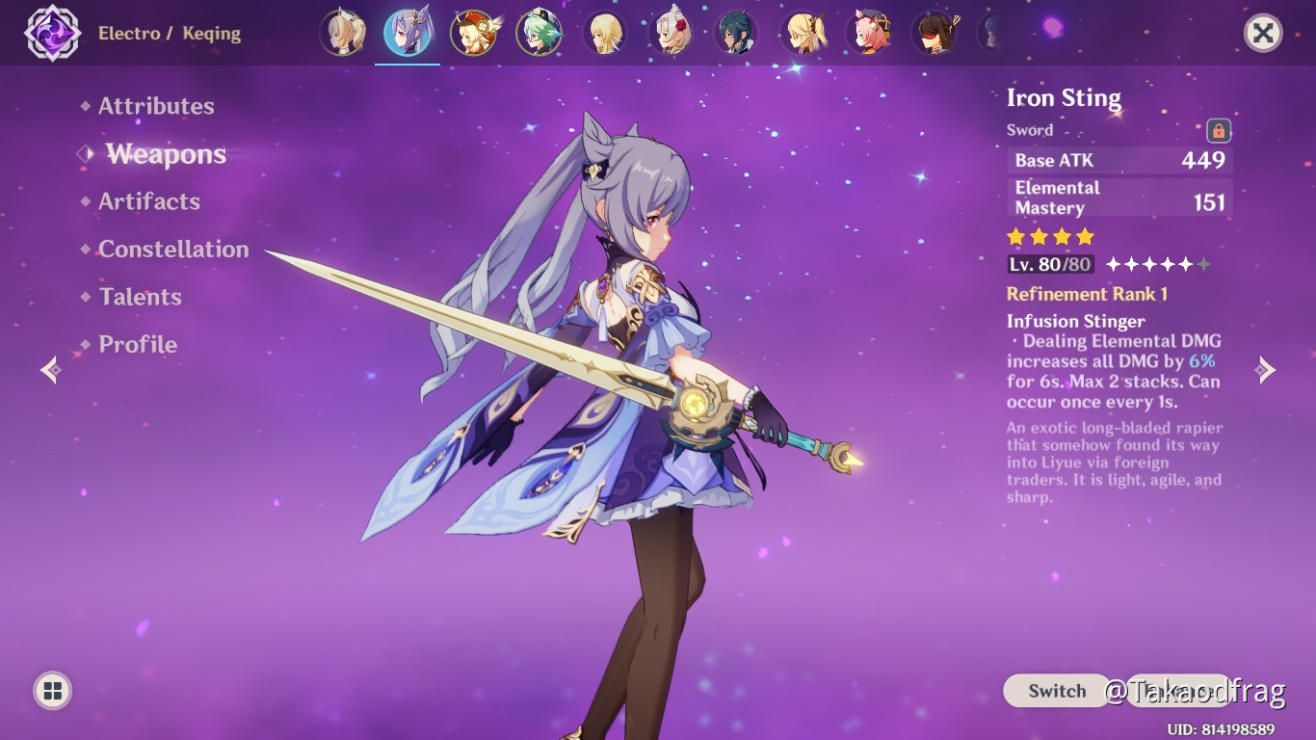 For sword-users that rely largely on their Elemental Skill/Burst or have a clear advantage when using elemental reactions, then the Iron Sting would be better than Prototype Rancour.

One character that comes to mind concerning this weapon’s maximization would be the Traveler. It’s also a good choice for Xingqiu or Keqing and works well with Albedo or even Bennett. Iron Sting gives tons of Elemental Mastery and further bolsters elemental damage for those sweet reactions. 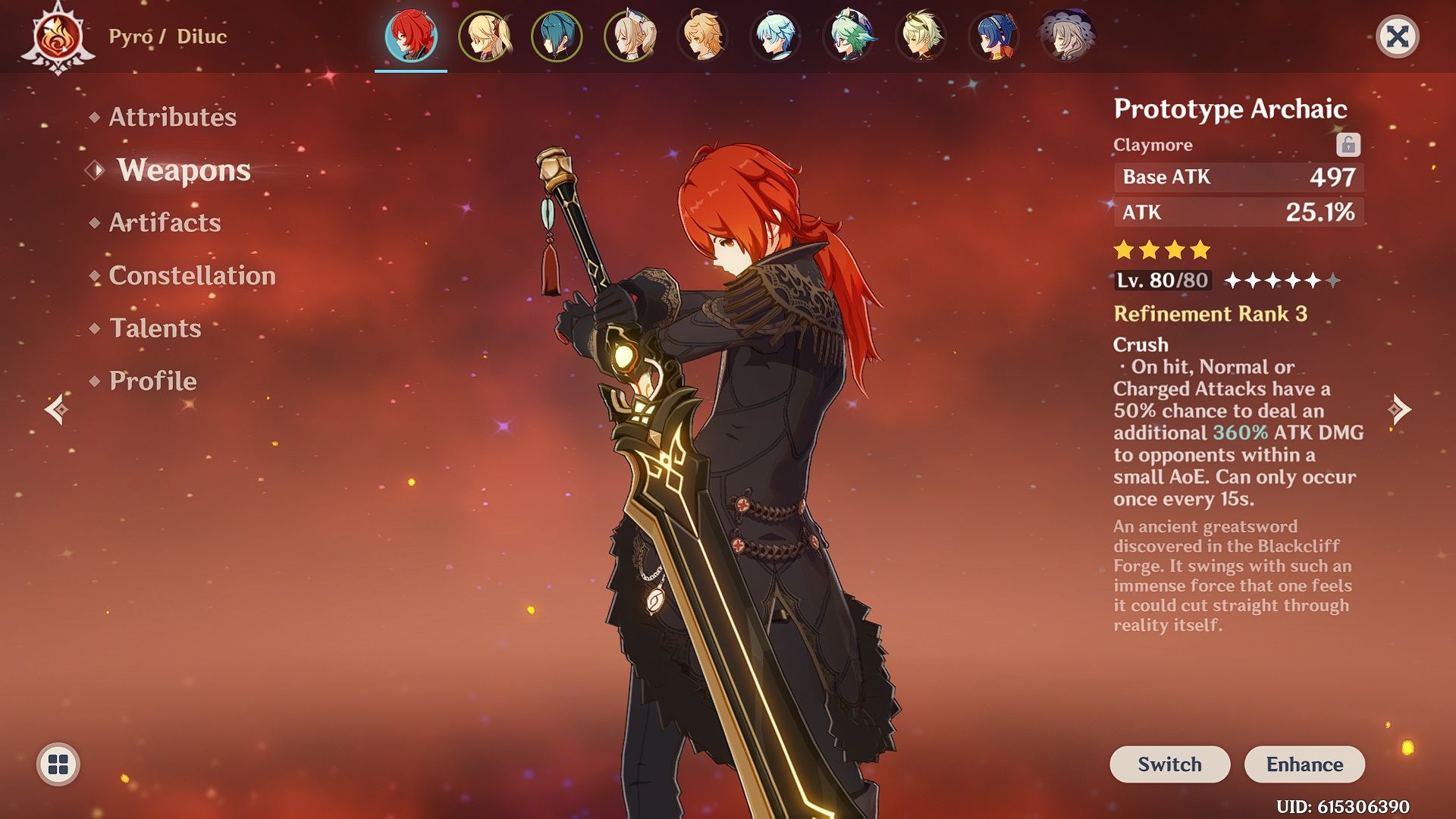 For most players who don’t have Wolf’s Gravestone, they’ll have to be content in the catharsis of having an R5 (Refinement 5) Prototype Archaic. It’s probably the most refined out of all the craftable weapons because it’s such a good budget alternative to Wolf’s Gravestone.

Many Diluc players love this claymore. Not only is it a percentage ATK increase thanks to the secondary stat but it also adds in some randomly occurring damage with each attack. It’s a purely offensive weapon with no complexities and should appeal well to our caveman tendencies. 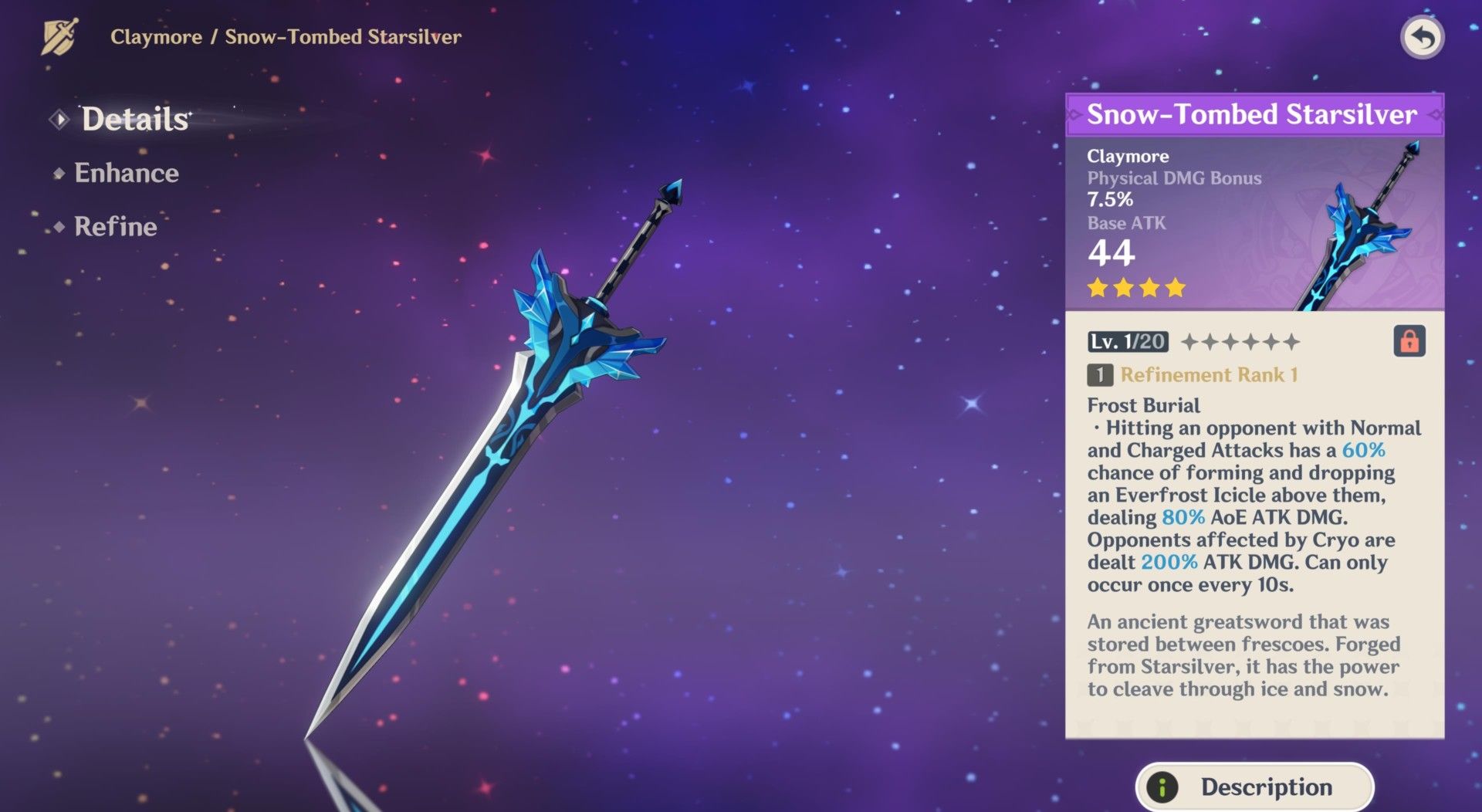 The Snow-Tombed Starsliver is actually a good competition for Prototype Archaic especially for characters that mostly deal physical damage. Two that come to mind in that category are namely Razor and the upcoming Eula, who’s rumored to be at her best version when dealing physical damage.

It’s even better for the latter since Eula deals cryo damage and the Snow-Tombed Starsilver adds in an icicle damage bonus against enemies affected by cryo. Meanwhile, the stats are not too far off from the best. The Physical DMG Bonus is quite meaty. 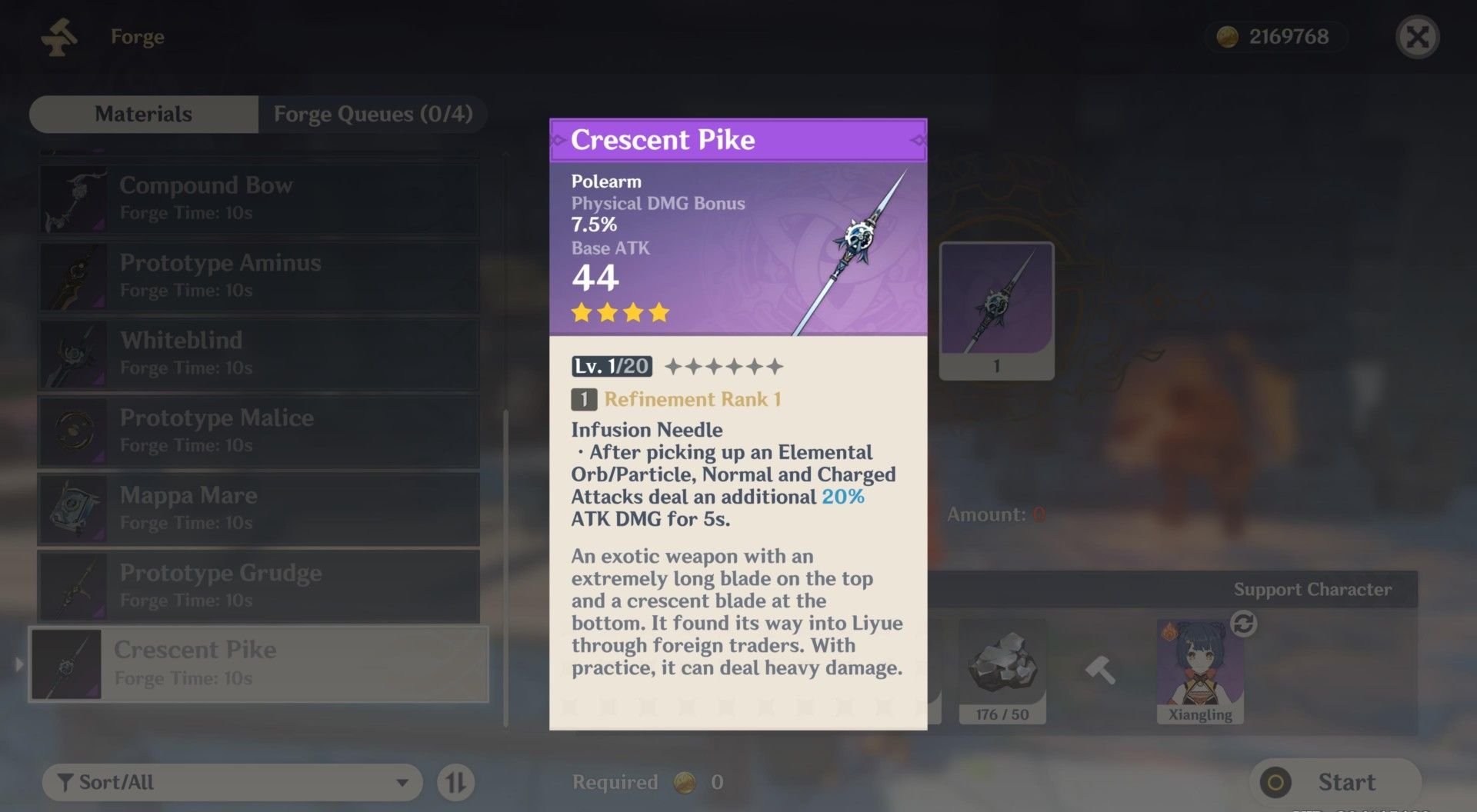 Speaking of physical damage, the Crescent Pike is like a polearm version of the Snow-Tombed Starsilver. Its secondary stat is physical damage and it’s actually pretty good for a physical DPS Zhongli whose banner is just around the corner.

That’s why forging a Crescent Pike in advance might be a good idea. It’s also perfect for Zhongli as he generates a lot of Elemental Orbs/Particles to activate the polearm’s situational quirk which increases ATK. 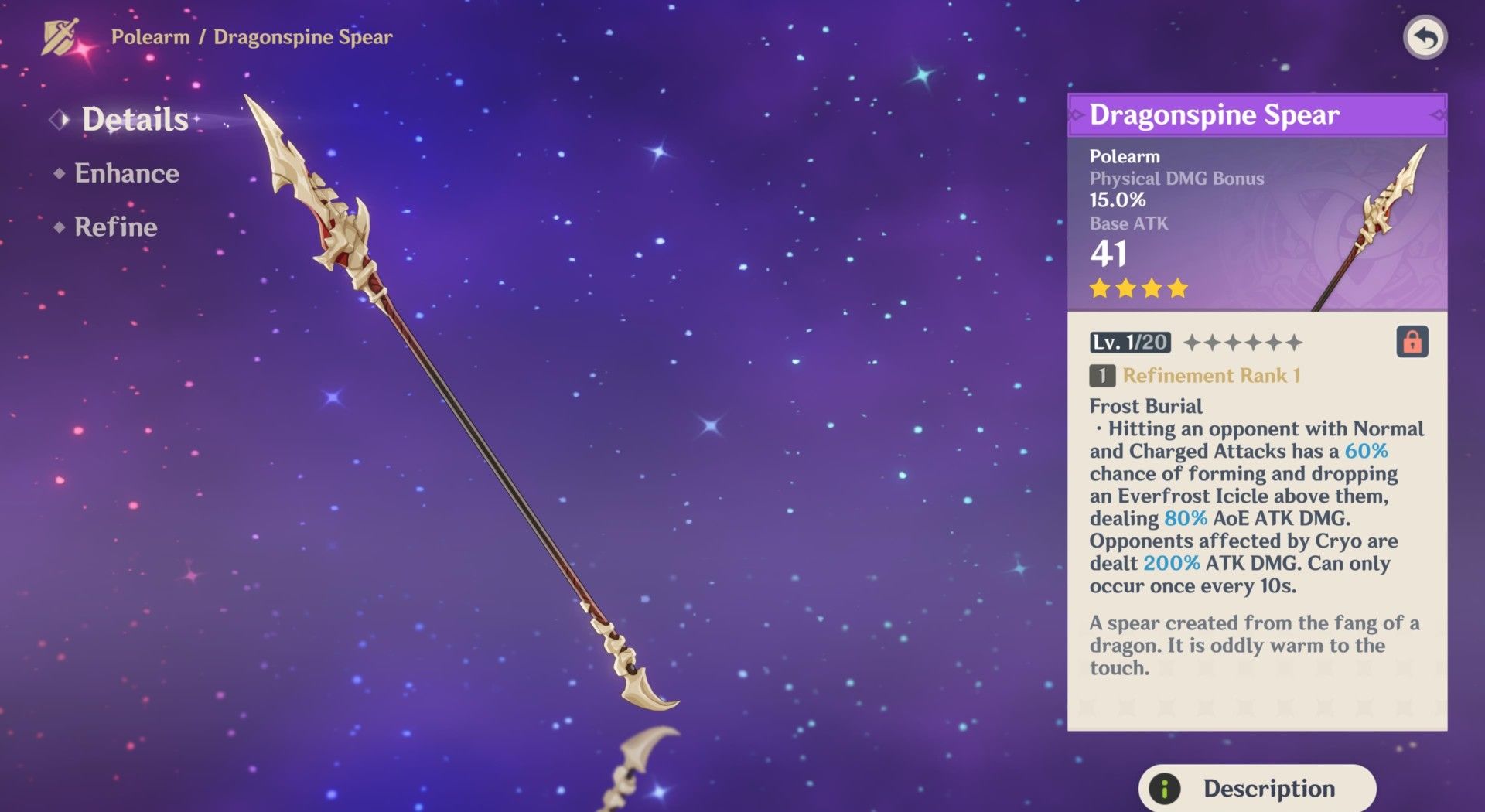 For the other polearm to craft, look no further than Dragonspine Spear. It’s obtainable in the same place as Snow-Tombed Starsilver and is pretty much the polearm equivalent of that weapon. For that matter, it’s a lovely weapon for Rosaria.

She can easily apply cryo on her targets, therefore, activating the weapon’s ability with bonus damage. Other than that, not many other characters will benefit from this weapon as Xiao and Hu Tao prefer Deathmatch (for 4-star budget weapons) instead and Xiangling needs to specialize in pyro.

Prototype Crescent, much like Prototype Archaic, is a good all-rounder bow that will work on any character if you can’t decide what build to pursue. Prototype Crescent mostly stacks a lot of ATK damage; its secondary stat adds chunks of those.

For any bow-user who relies on charged attacks, the Prototype Crescent might just ascend them into godhood as hitting a weak spot with this bow increases movement speed and ATK further. For someone like Ganyu, it can easily become monstrous. 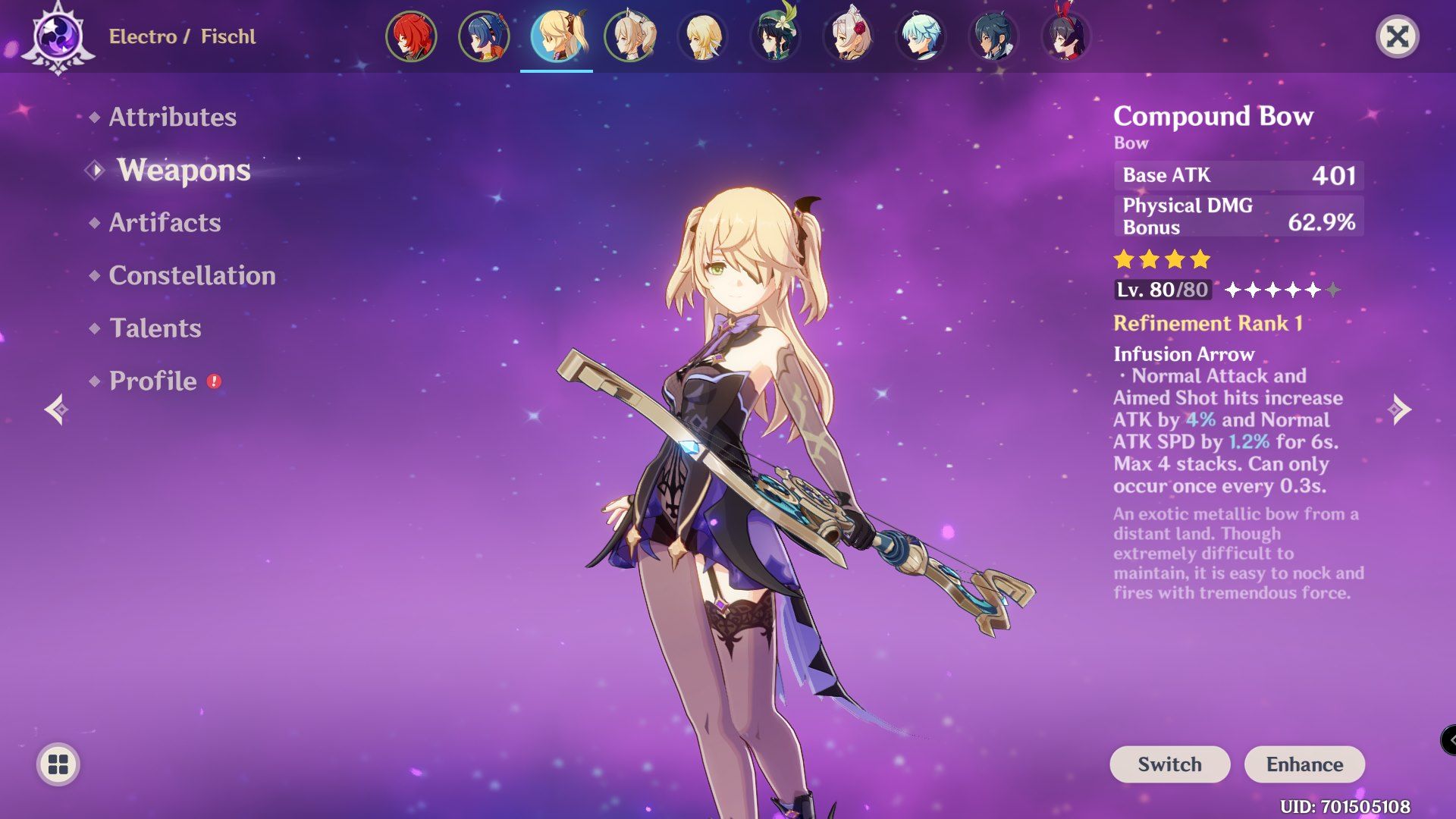 Then again, not all bow-users have a predisposition for attacking in charged shots. Some, like Fischl, prefer to turn bows into machine guns (possibly because she thinks she’s in Honkai Impact instead of Genshin). For such characters, then the Compound Bow would help immensely.

That would be assuming that your Fischl is C6 which isn’t hard to achieve these days. Other characters such as a DPS Venti will benefit well from the Compound Bow’s attack speed increase ability. 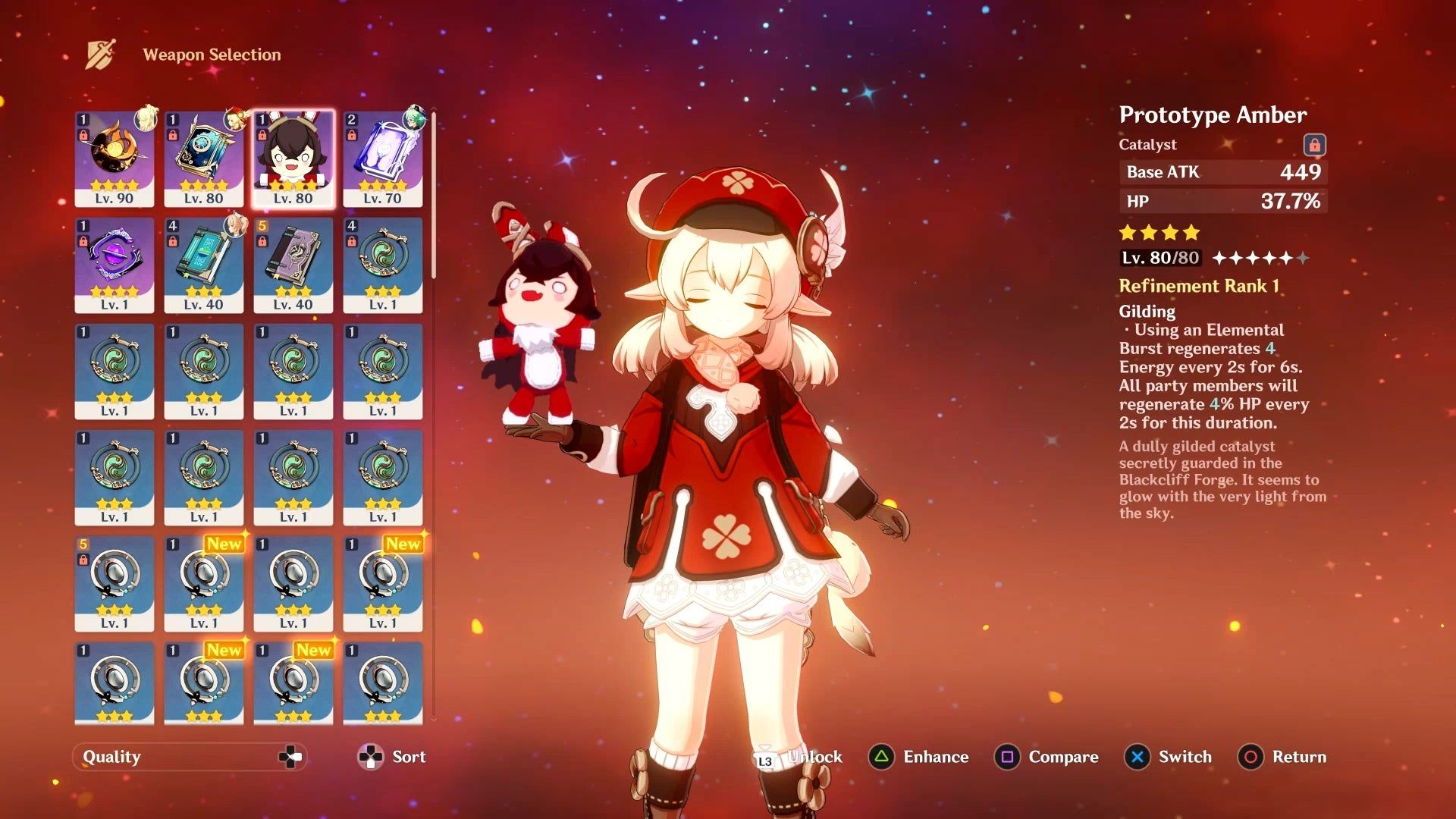 Now on the Catalysts. The Prototype Amber is decent in this regard, despite the HP secondary stat which appears to have been made with Barbara in mind. The item’s ability activates with the Elemental Burst and can turn Barbara into an energy battery for the party.

Beyond her, not many other catalyst-users would benefit from the Prototype Amber so feel free to put it on a low priority until perhaps another HP-scaling catalyst-user comes into the scene.

Mappa Mare is actually a better option compared to Prototype Amber due to the Elemental Mastery secondary stat. It’s tailor-made for catalyst-users that love to utilize elemental reactions such as Klee, Mona, or Barbara.

When put in the right hands, it can turn Melt or Vaporize setups into one-shot-one-kill parties that can deal upwards of six-digit damage numbers. Of course, that is assuming you don’t have better 4-star or even 5-star weapons.

NEXT: Genshin Impact: 5 Relationships Fans Hope Are Real (And 5 They Really Don’t) 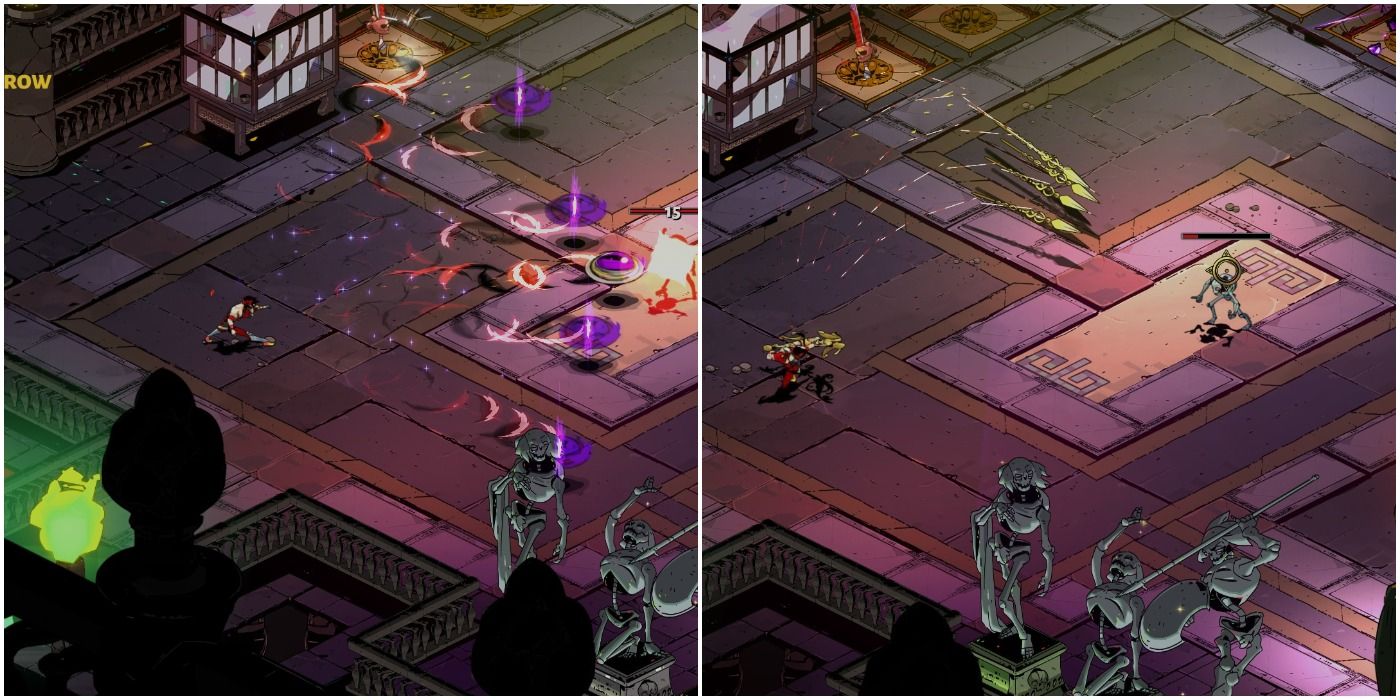 Sid was born, did some stuff, then decided to become a writer.

He finds respite in the sweet embrace of mass media escapism after having risked his life too many times as a journalist covering warzones and depressed areas. Nowadays he mostly risks his bladder as he tries to hold his urine waiting for those precious post-credits scenes at the movies or trying to kill Souls-like bosses. So far it’s going well. Probably.