Shikanoin Heizou is an Anemo user in Genshin Impact. Hailing from the Inazuma region, he’s the Lead Detective of the Tenryou Commission. His weapon of choice is the Catalyst, and while he has a select few that are preferable over the rest, he can work with what you give him as long as his teammates provide Resonance.

The main areas to focus on when equipping Heizou with weapons and Artifacts alike are Crit damage and Attack. As his stats scale based on Attack, this will enhance his natural strengths. You can also look at Elemental Mastery when building him, though it shouldn’t be your primary goal. 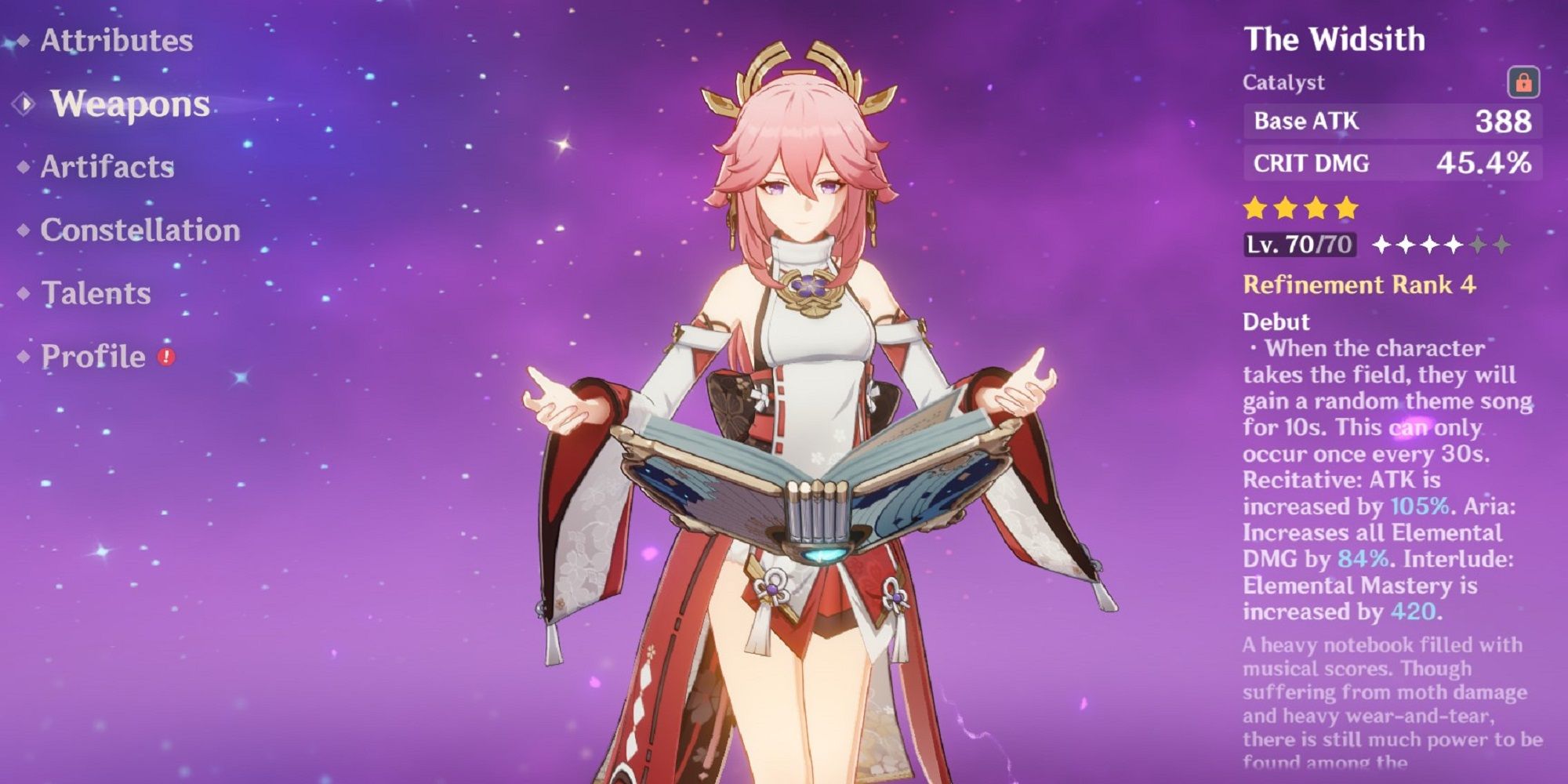 The Widsith can be found through Wishes and is a common recommendation for Catalyst users. It will boost Heizou’s Base Attack between 42 and 510, and has a substat of Crit damage that gives him an extra 12 to 55.1 percent, depending on his level.

Whenever Heizou goes out onto the battlefield, he’ll get a randomized theme song for ten seconds, and this can occur every 30 seconds. Depending on the theme song he gets, he could see his Attack increase by 60 percent, his Elemental damage go up by 48 percent, or even his Elemental Mastery boosted by 240. 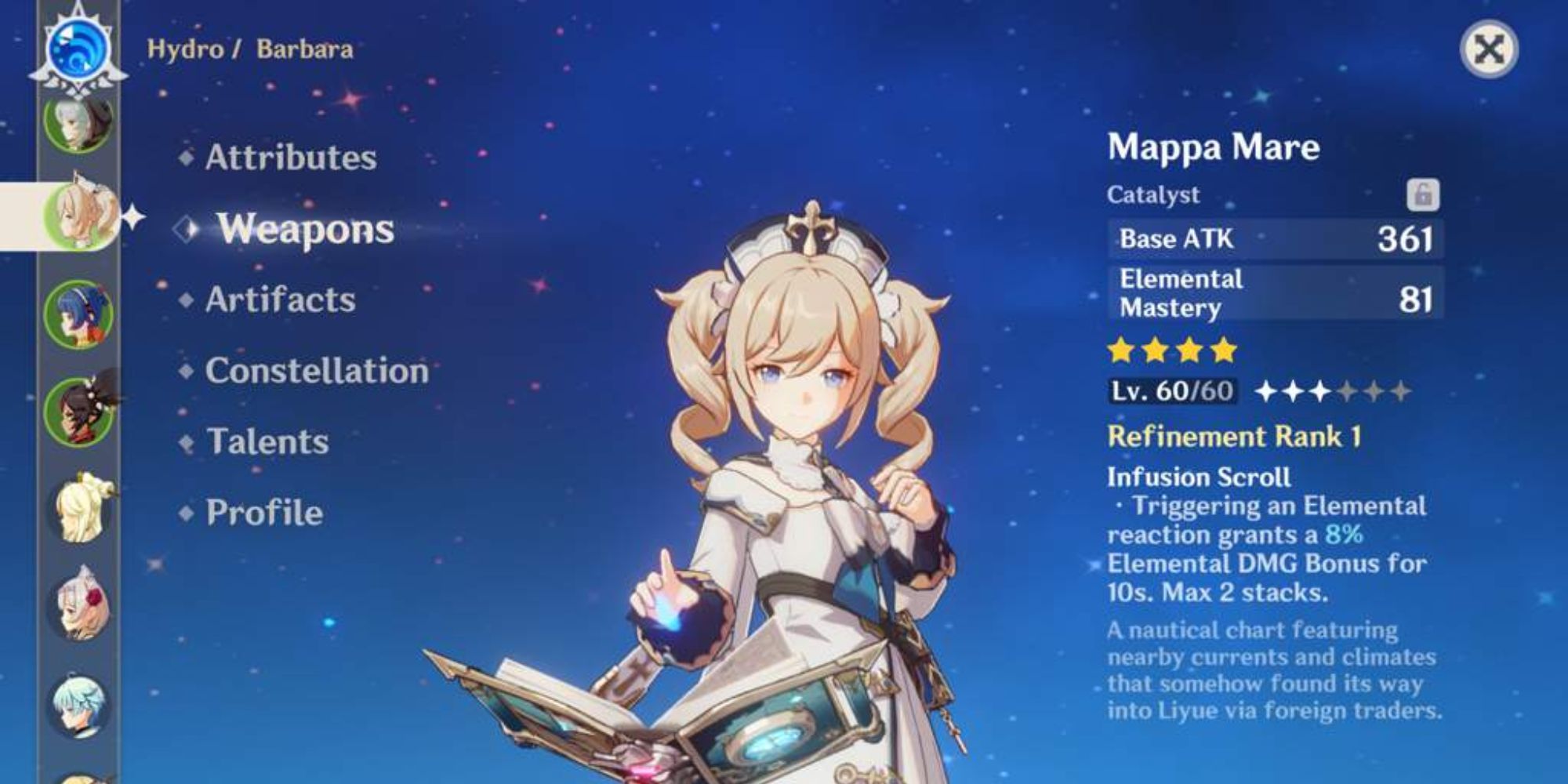 You can obtain the Mappa Mare for Heizou either by forging it yourself at the blacksmith’s shop or pulling it in the Stellar Reunion Event. No matter how you get it, equipping Heizou with it will boost his Base Attack between 44 and 565 based on his level in the game. This Catalyst has a substat of Elemental Mastery that will increase that stat between 24 and 110.

Once you’ve triggered an Elemental Reaction, Heizou will get another eight percent Elemental damage bonus for 10 seconds. You can stack this effect twice. 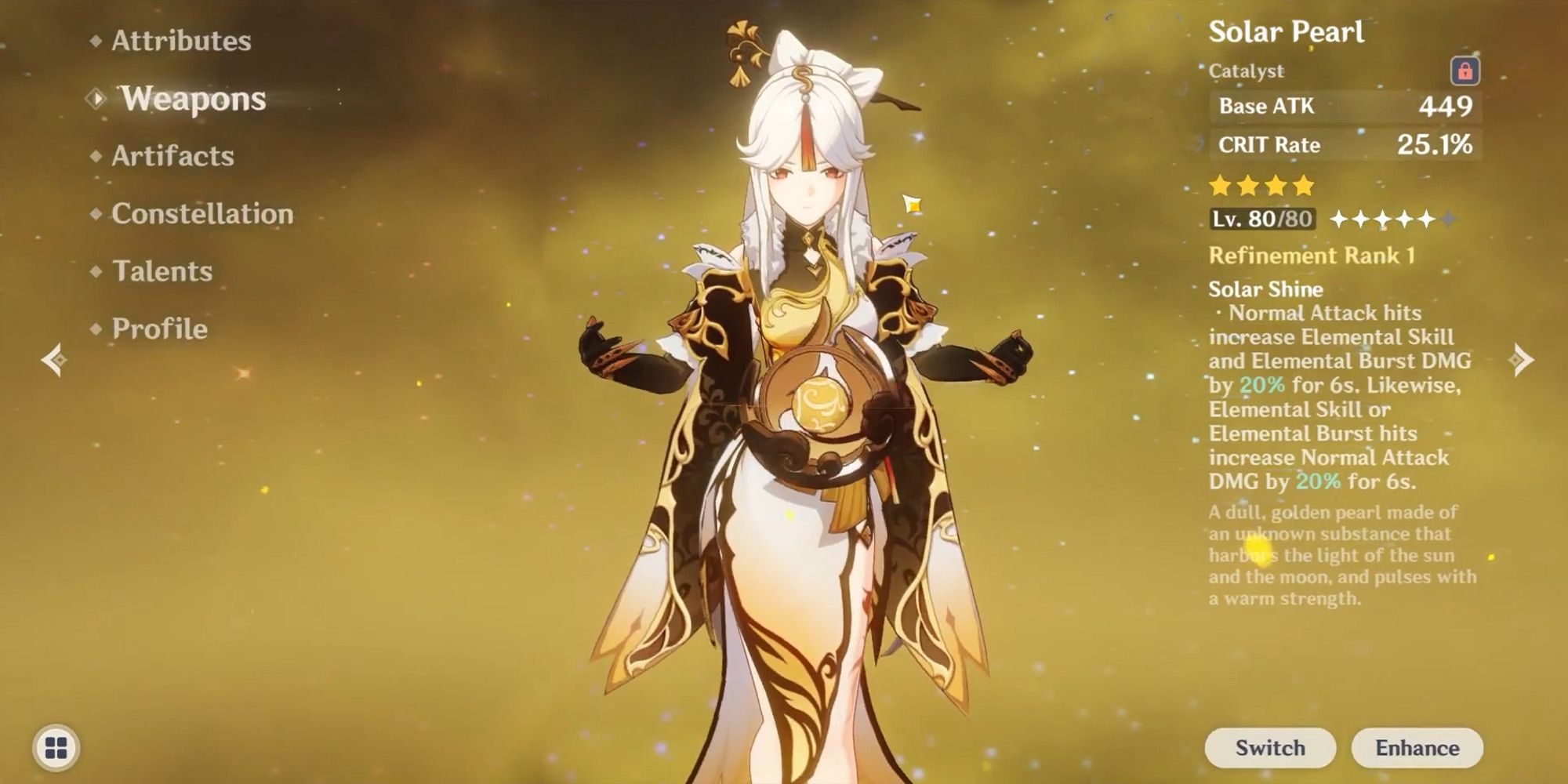 In order to get the Solar Pearl, you’ll have to spend a bit of real cash on Genshin Impact. This Catalyst is only available through the Gnostic Hymn part of the Battle Pass. If you decide to go that route, this weapon will boost Heizou’s Base Attack between 42 and 510 and his Crit Rate by six to 27.6 percent. 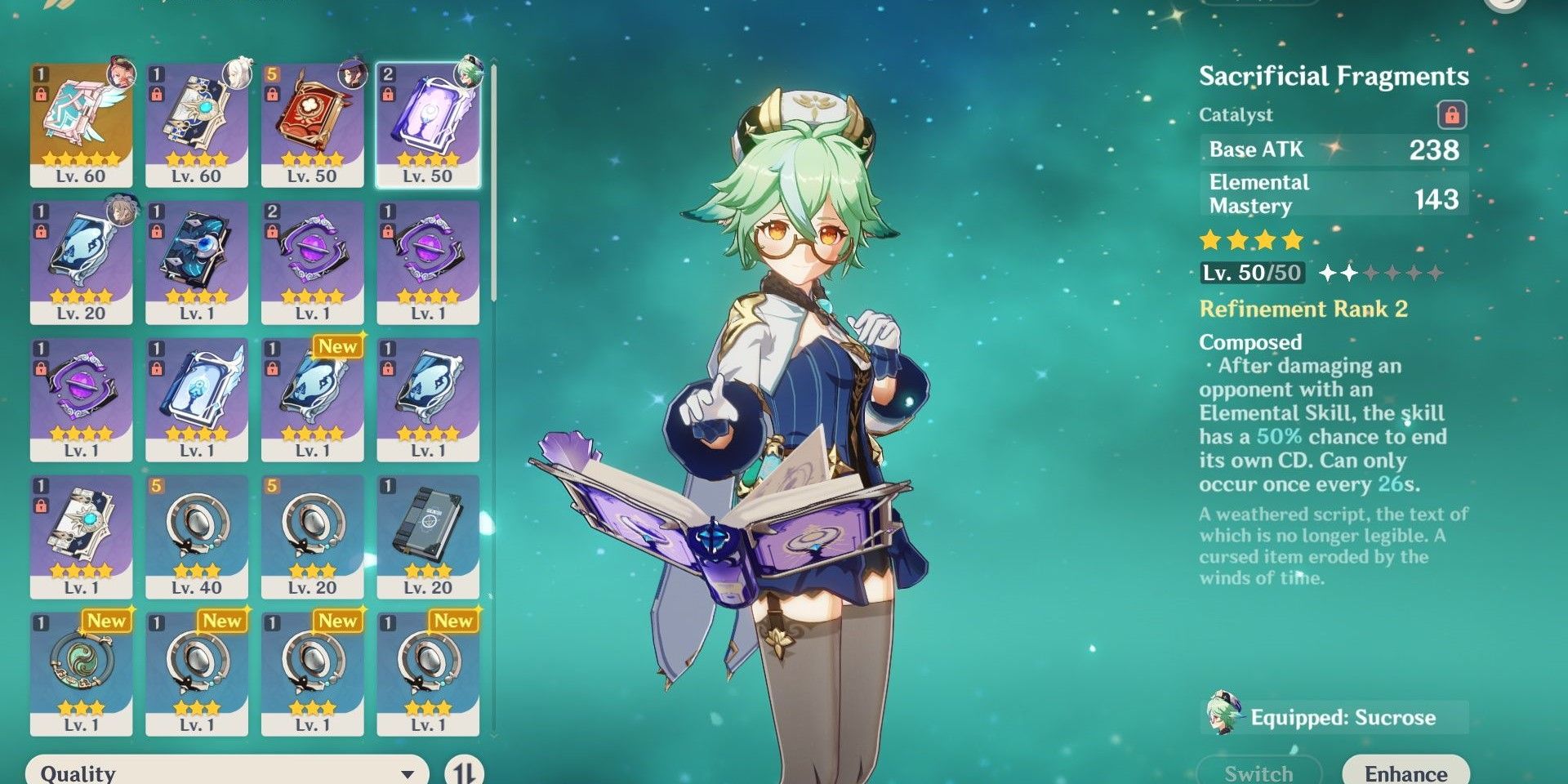 You can get the Sacrificial Fragments fairly easily from Wishes. Once obtained, equipping Heizou with it will give him a 41 to 454 boost to his Base Attack, depending on his level. He’ll also get an increase between 48 and 221 to his Elemental Mastery through its substat. 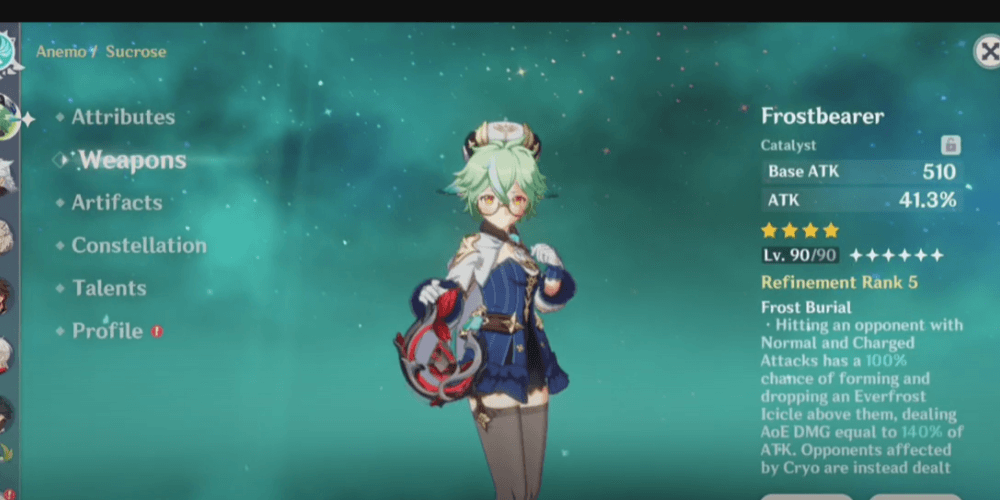 The Frostbearer is a nice weapon to aim for because you can forge it yourself at the blacksmith’s shop, all you need to do is gather the supplies. Using this Catalyst, you’ll see Heizou’s Base Attack go up between 42 and 510, with the exact stat determined by his level. It also gives an increase to his Attack between nine and 41.3 percent.

Since he’s an Anemo user, the other benefits of the Frostbearer rely on the team you build around him. When Heizou successfully injures an opponent with a Normal or Charged Attack, there will be a 60 percent chance to form an Everfrost Icicle above that enemy, which will deal 80 percent AoE Attack damage. This is most effective when targets are affected by Cryo already because then damage goes up by 200 percent. 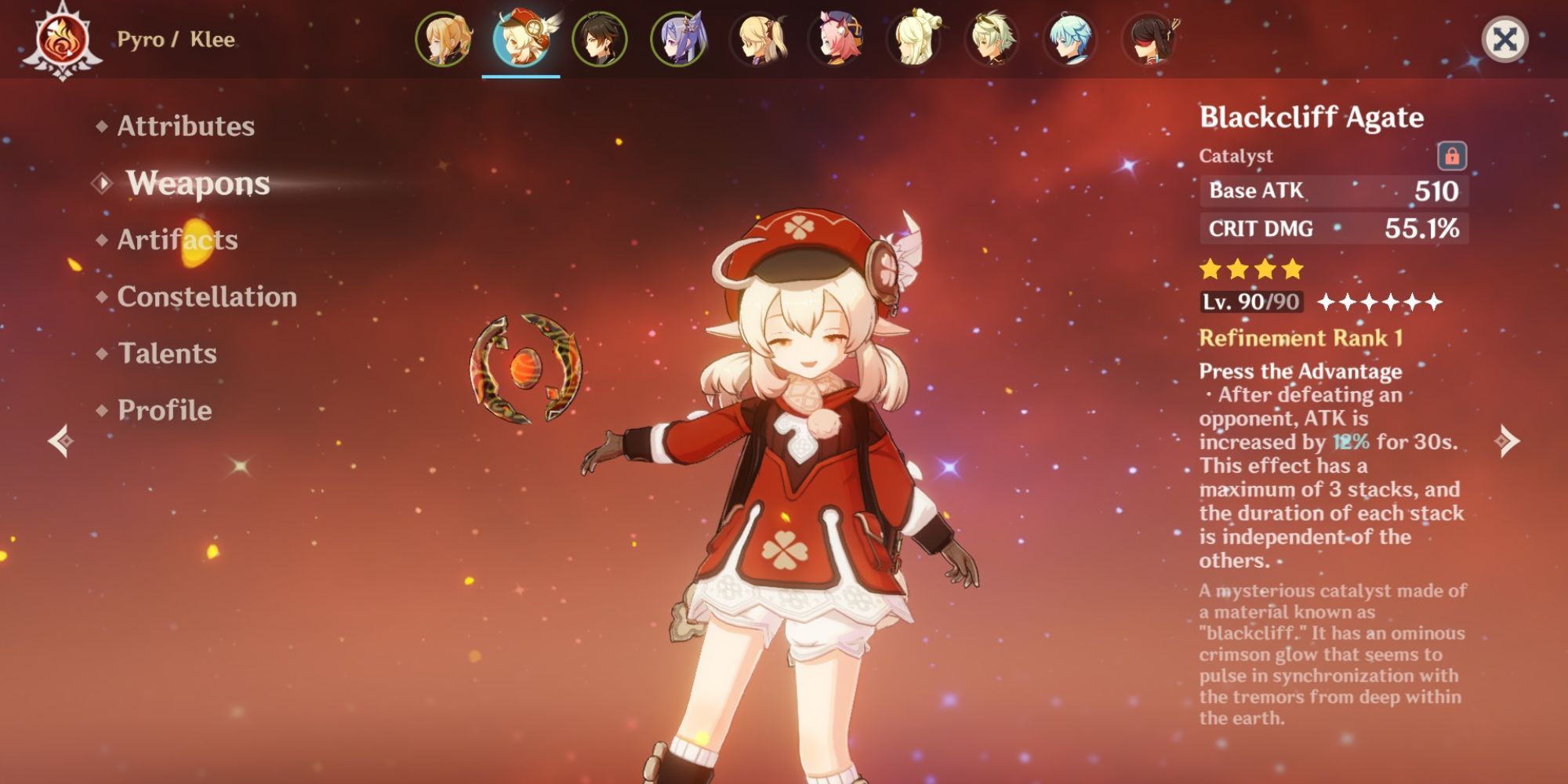 Getting the Blackcliff Agate requires going through Paimon’s Bargains. It lifts the Base Attack between 42 and 510 and gives a 12 to 55.1 percent boost to Heizou’s Crit damage.

In battle, once you’ve knocked out one target, Heizou’s Attack will increase by 12 percent for 30 seconds. This can be stacked up to three times, and each stack has an independent duration. This means you’ll be able to keep stacks going as they wear off, and increase his Attack consistently throughout the fight.

4 The Memory Of Dust – Five Star 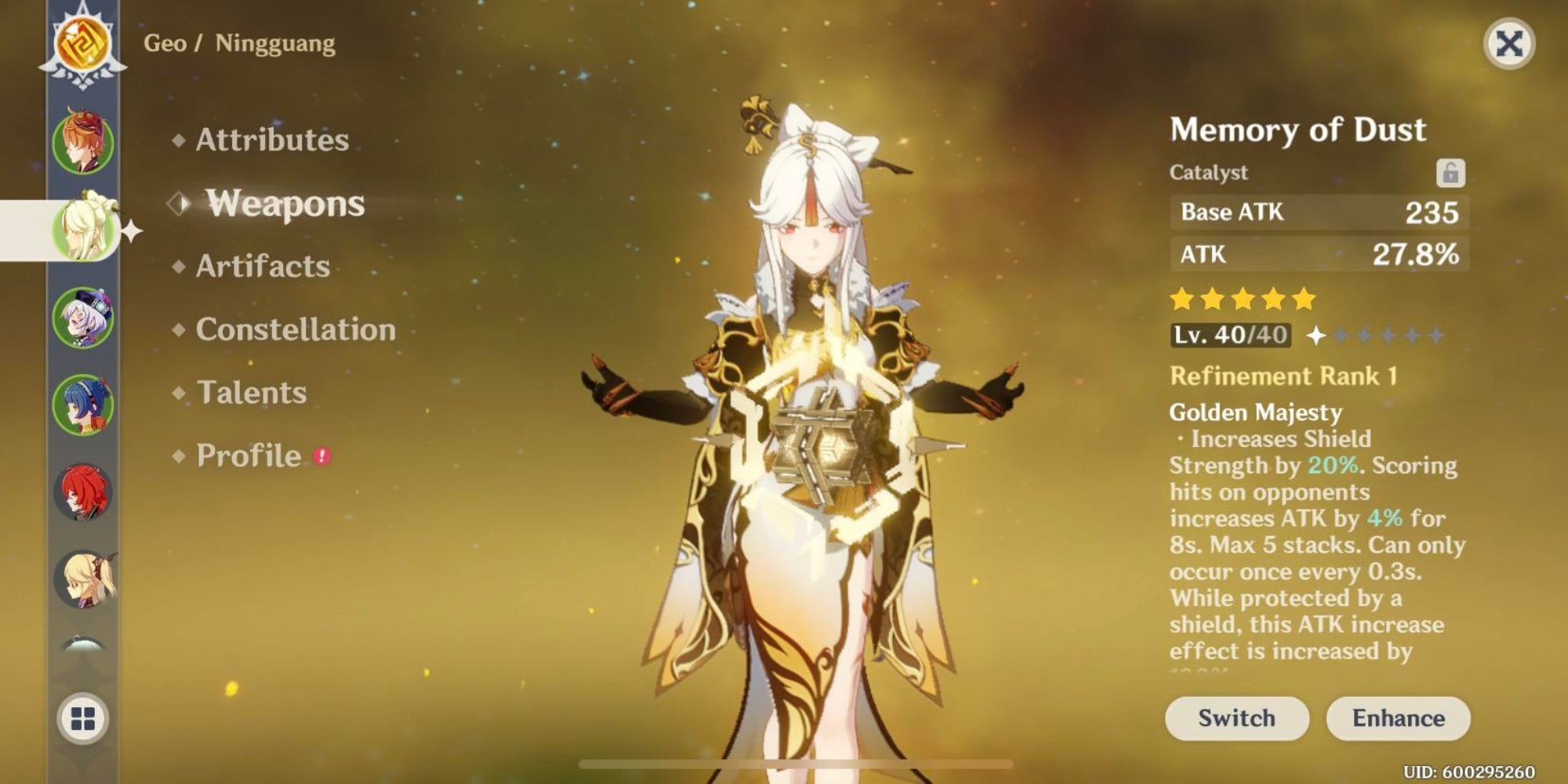 You will need to go to the Weapon Event Wishes to pull the Memory of Dust Catalyst. Equipping Heizou with it will give him an extra 46 to 608 on his Base Attack, depending on his level. Its substat Attack will give another 10.8 to 49.6 percent boost.

This Catalyst will increase the shield strength of Heizou by 20 percent, and any hits that connect with a target will increase Attack by four percent for eight seconds. When his shield is up, Attack damage is increased by 100 percent.

3 The Lost Prayer To The Sacred Winds – Five Star 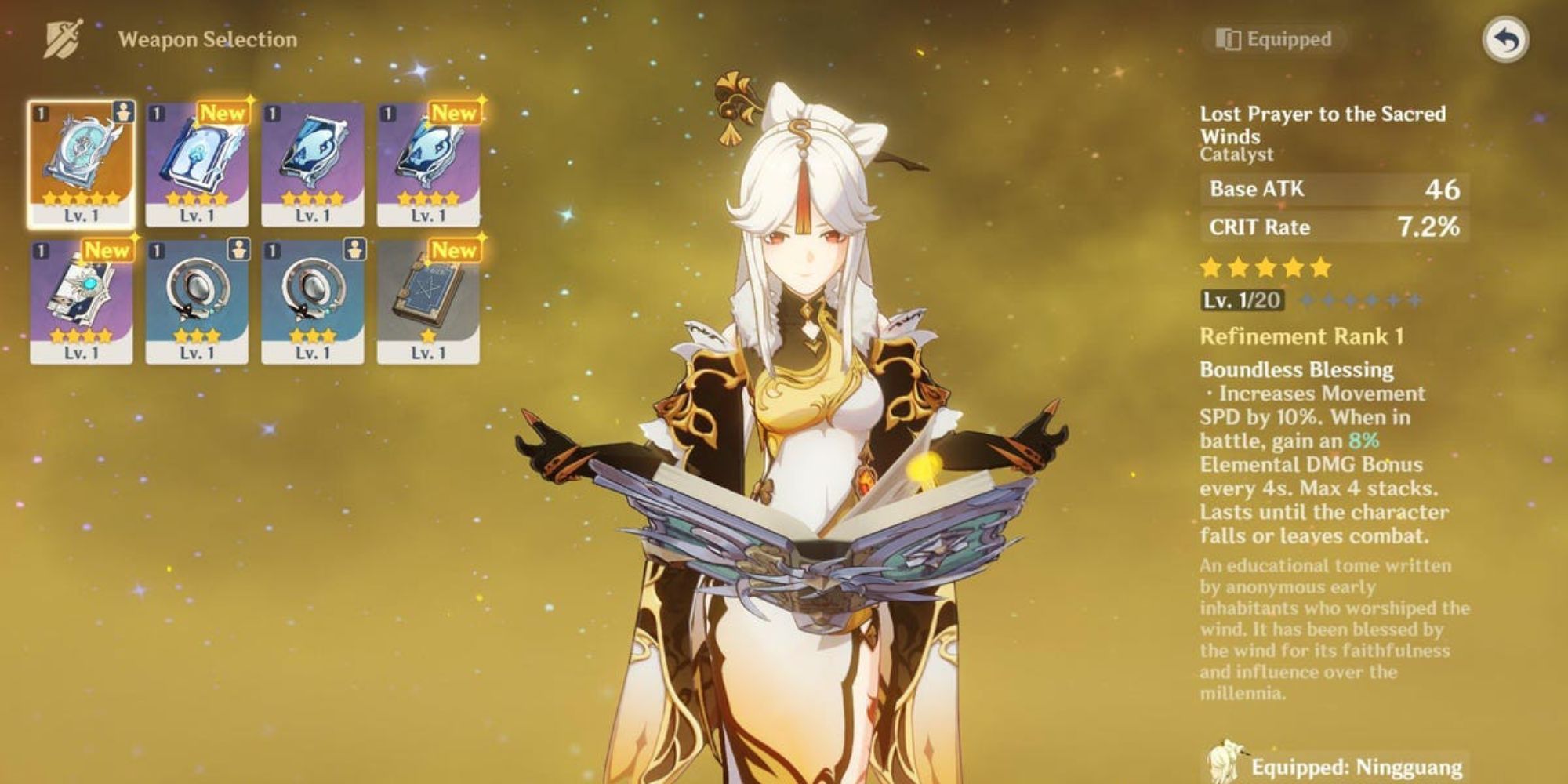 The Lost Prayer can be pulled from Wishes at a slightly higher rate due to its five-star ranking. However, if you get it, it will increase Heizou’s Base Attack ranging from 46 to 608. There’s also the secondary stat of Crit Rate that gives him a boost of 7.2 to 33.1 percent based on his level.

While using the Lost Prayer, Heizou’s Movement Speed will be increased by ten percent. He’ll also have an eight percent boost to his Elemental damage bonus every four seconds he’s in battle, and this can be stacked up to four times. This effect will last until you take Heizou off the field, or he’s knocked out. 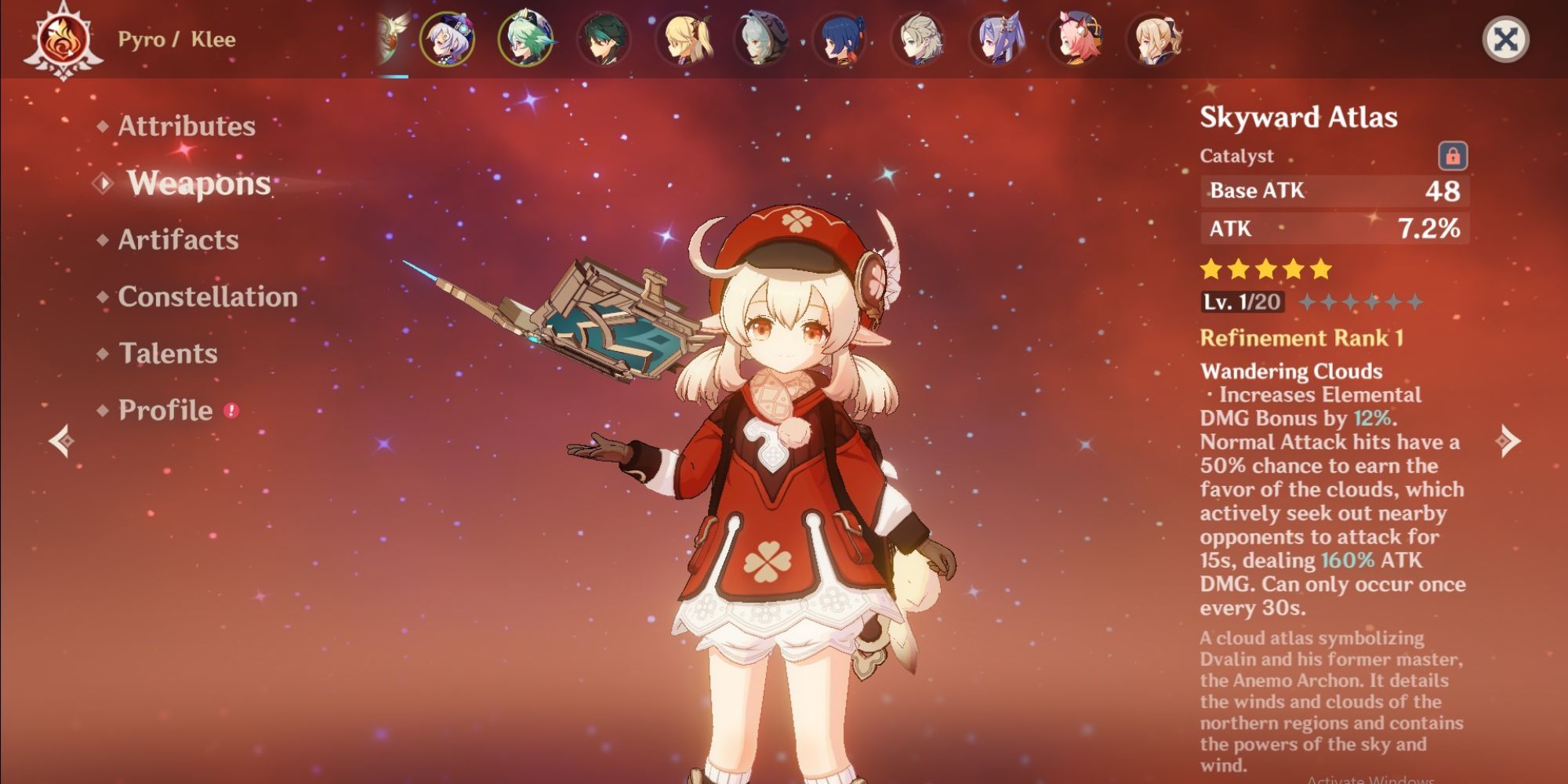 You can pull the Skyward Atlas from Wishes, but since it’s another five-star weapon, you’ll have to work a little harder to get it. After you have it, it will boost Heizou’s Base Attack between 48 and 674. It will also give his Attack a 7.2 to 33.1 percent increase with its secondary stat.

This Catalyst will increase Heizou’s Elemental damage bonus by 12 percent. Whenever he attacks an enemy with his Normal Attack, there will be a 50 percent chance he’ll earn the Favor of the Clouds, which will actively find nearby targets for 15 seconds and hit them with 160 percent Attack damage. You can trigger this once every 30 seconds Heizou is in battle. 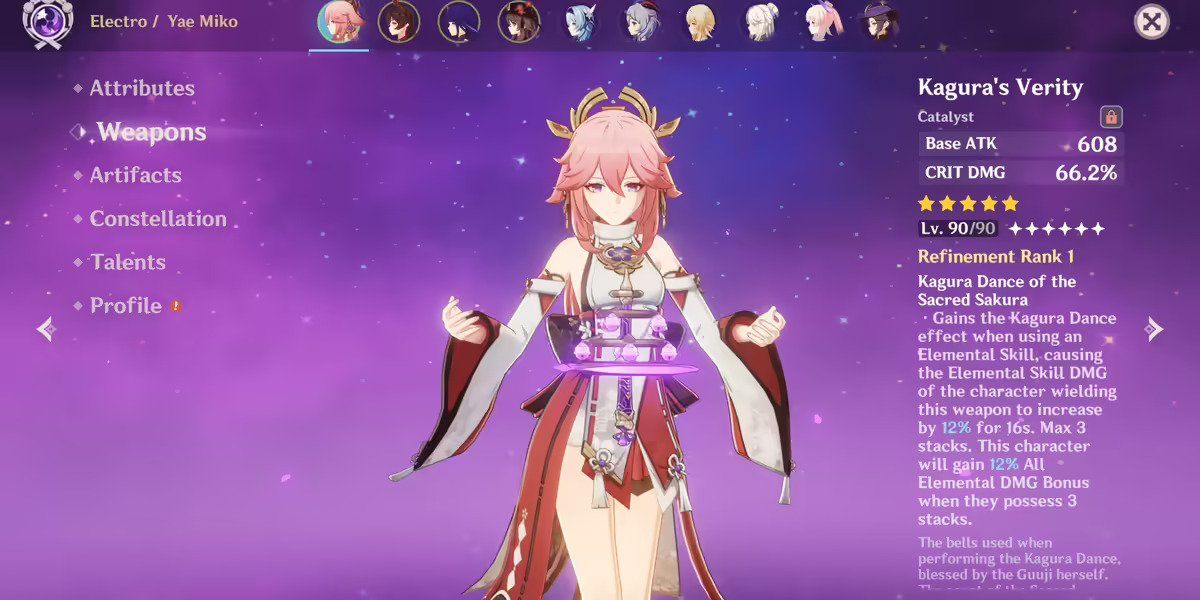 Kagura’s Verity is only available through the Weapon Event Wishes. If you’re lucky enough to snag it, giving it to Heizou will increase his Base Attack in a range between 46 and 608 based on his level in the game. The secondary stat this Catalyst has boosts his Crit damage between 14.4 and 66.2 percent.

He’ll gain a Kagura Dance effect after using his Elemental Skill, and this will increase damage inflicted by 12 percent for 16 seconds. You’ll be able to stack this up to three times. When you’ve hit the maximum stacks, Heizou will get a 12 percent damage bonus to all Elemental moves.