Now that the Sakoku Decree has finally ended, the island nation of Inazuma has officially opened its borders to the rest of Teyvat. Thanks to Genshin Impact's in-game events, we've already witnessed several unexpected foreigners visiting Inazuma, and the results were pure entertainment.

Characters from other regions are not the only ones exploring Inazuma these days, though. Players themselves have had the ability to traverse Inazuma for a while now, but there's almost always a reason to come back to this mystical region. In your travels there you've probably run into more than one unique resource that can be used to benefit your team, but this guide will clarify the best locations to collect all of Inazuma's Local Specialties.

What Are The Inazuma Specialities? 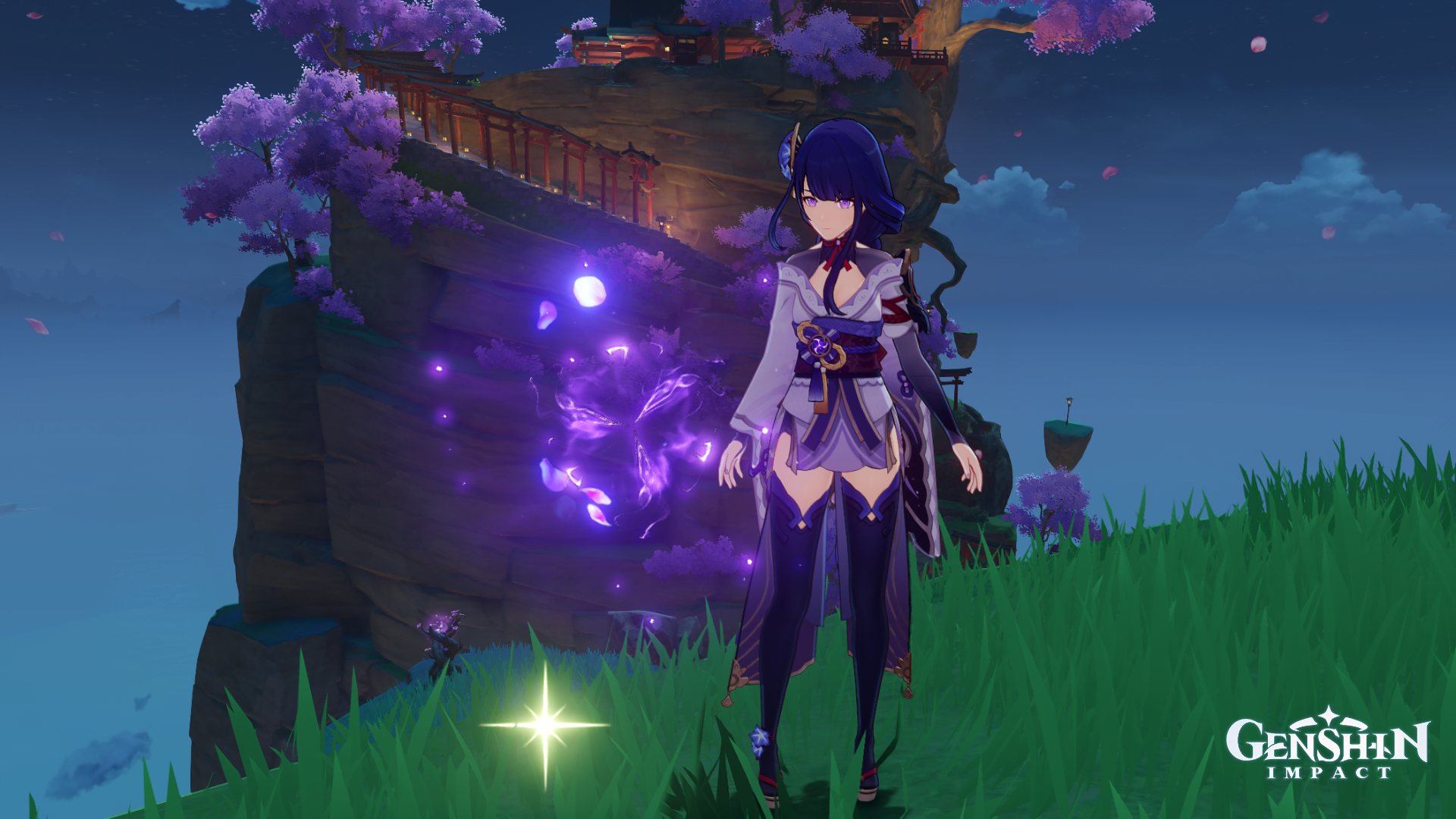 It's definitely an eclectic assortment of materials, but you'll need to collect them if you want to power up your Inazuman characters. Every character that calls Inazuma their home will need one of these materials in order to ascend, so let's break down the best places to farm these items.

Where Can I Find Inazuma Specialties?

The Inazuma Local Specialties are scattered widely across all of Inazuma's islands, but they all have certain locations where they are most easily found.

Watatsumi Island's steadfast general, Gorou, has a Passive Talent that will reveal the locations of Inazuma Local Specialties on your mini-map if he is in your party. Maybe he can sniff them out or something. 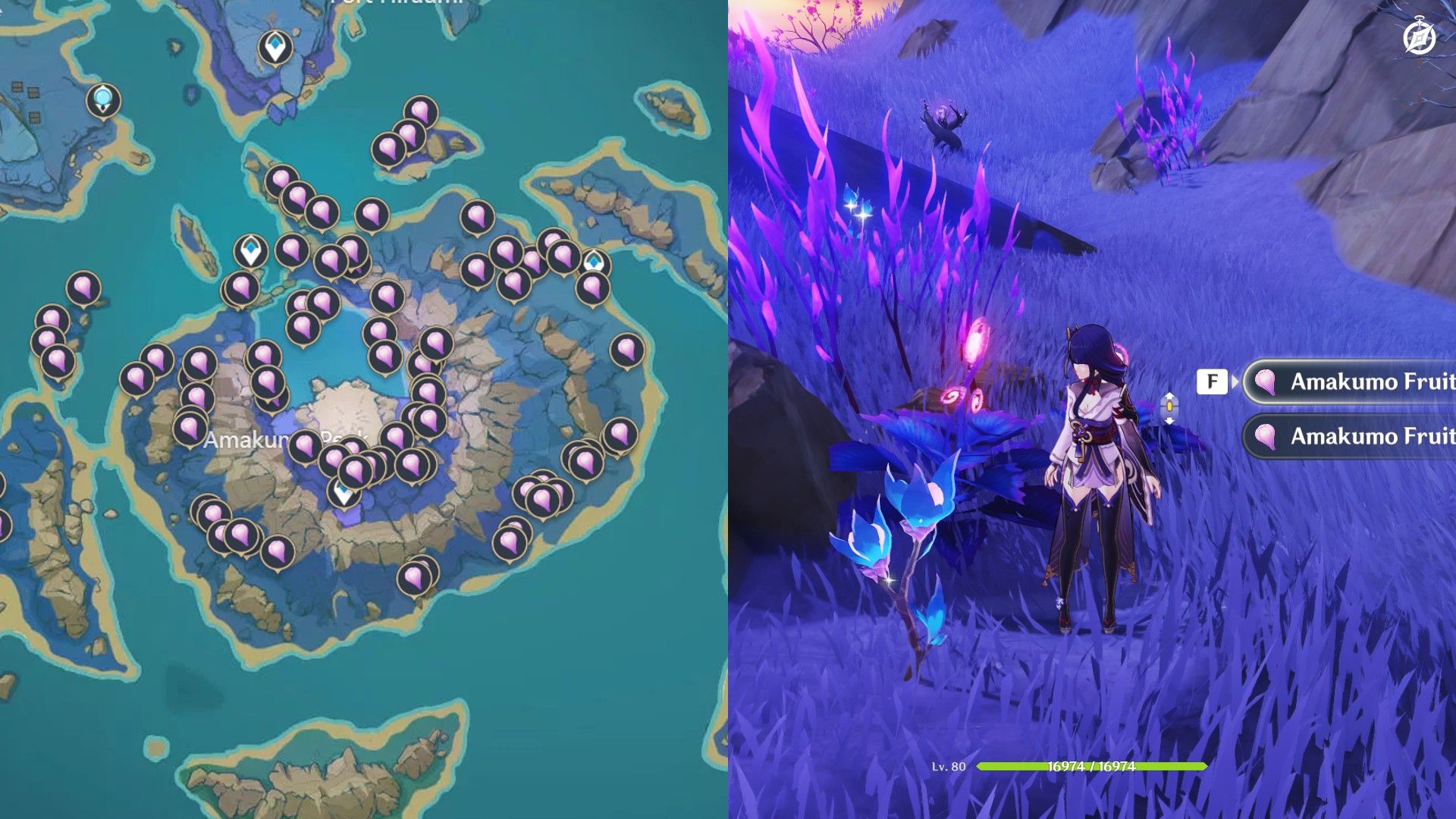 Amakumo Fruit grows exclusively on Inazuma's Seirai Island. Fortunately, it is extremely abundant and is arguably the easiest Local Specialty to collect in Genshin Impact. Simply walk around the rings surrounding the crater on the island and you'll collect dozens of Amakumo Fruit in no time.

There is currently no vendor that sells Amakumo Fruit.

Raiden Shogun is the only character who utilizes Amakumo Fruit for her ascension material. 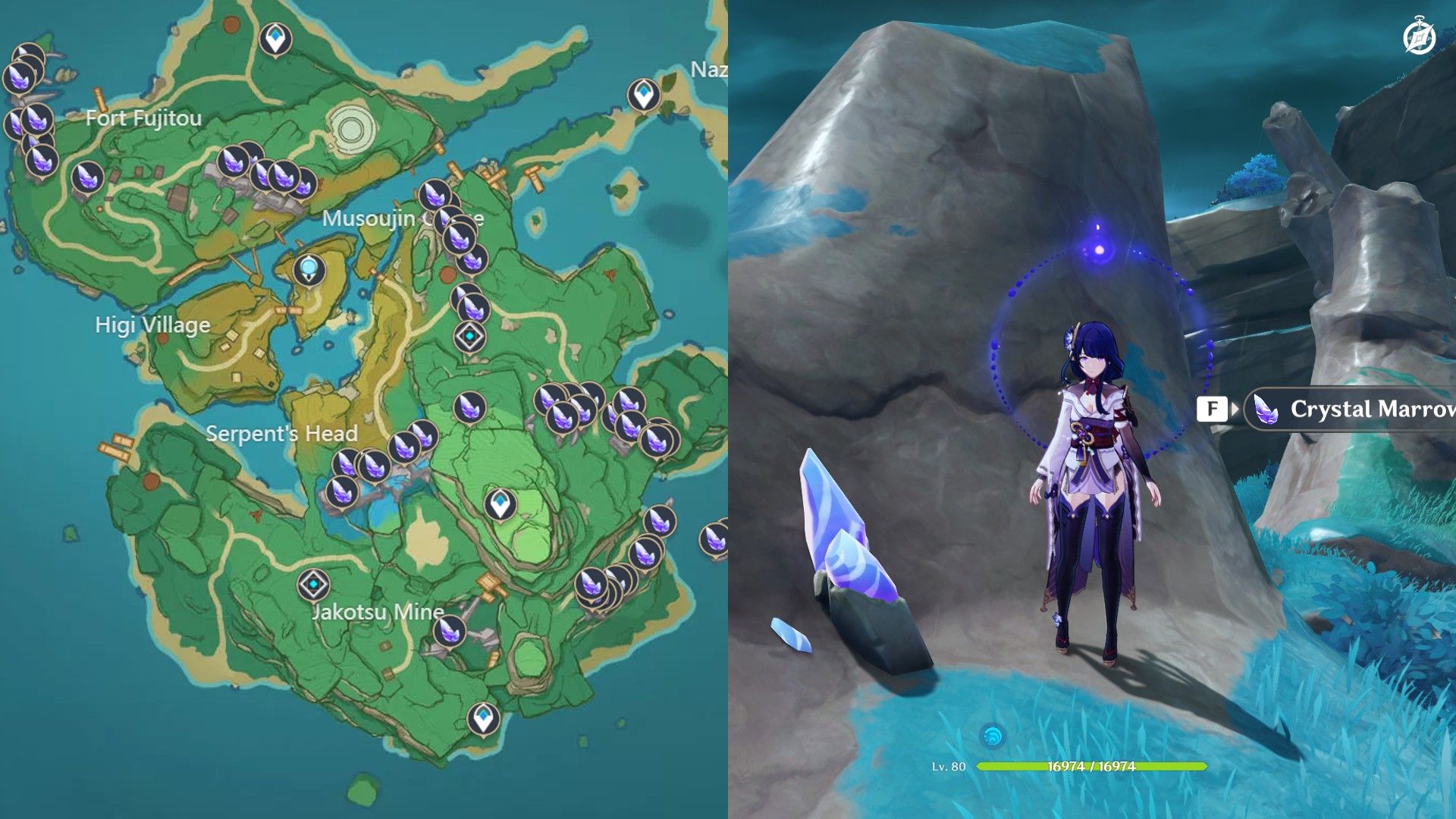 If you've ever visited Yashiori Island, you've probably noticed the giant snake skeleton that stretches across the entire area. This is all that remains of the serpent god Orobashi, and it's also where Crystal Marrow can be found. This ore-like substance grows on Orobashi's bones, which means you're likely to find Crystal Marrow wherever you see his skeleton. You also do not need to mine this material like you have to do with other ores and stones—simply walk up and collect it.

At this time, there is no vendor that sells Crystal Marrow.

Aloy and Sayu both use Crystal Marrow for their ascensions. 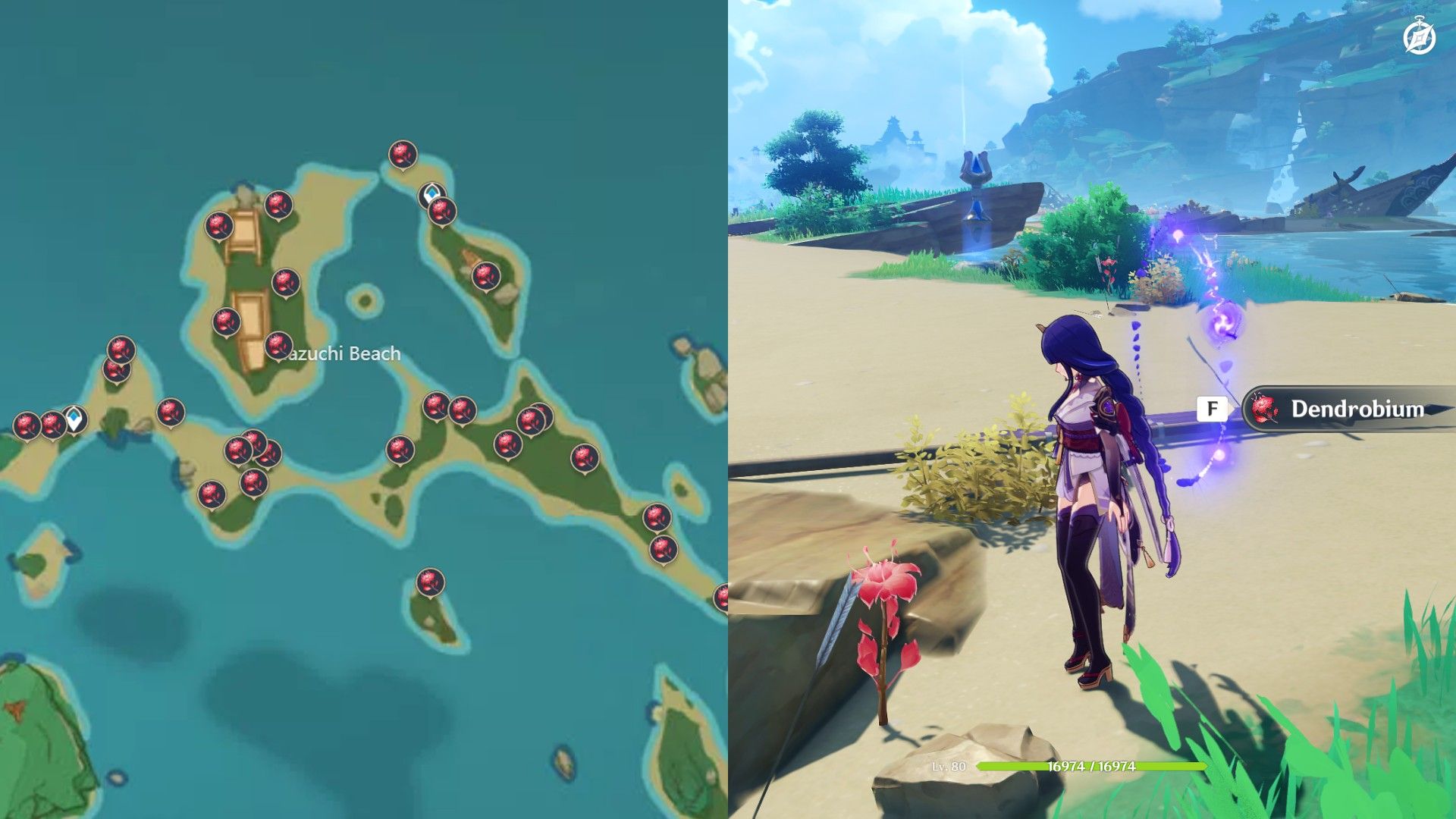 Dendrobium is said to grow in places that have experienced much bloodshed in the past. As such, it can be found in several spots around Yashiori Island, including the Kujou Encampment and the area near Maguu Kenki. The best place to pick these flowers, however, is Nazuchi Beach.

Like the previous Local Specialties, Dendrobium is not sold by any vendor. 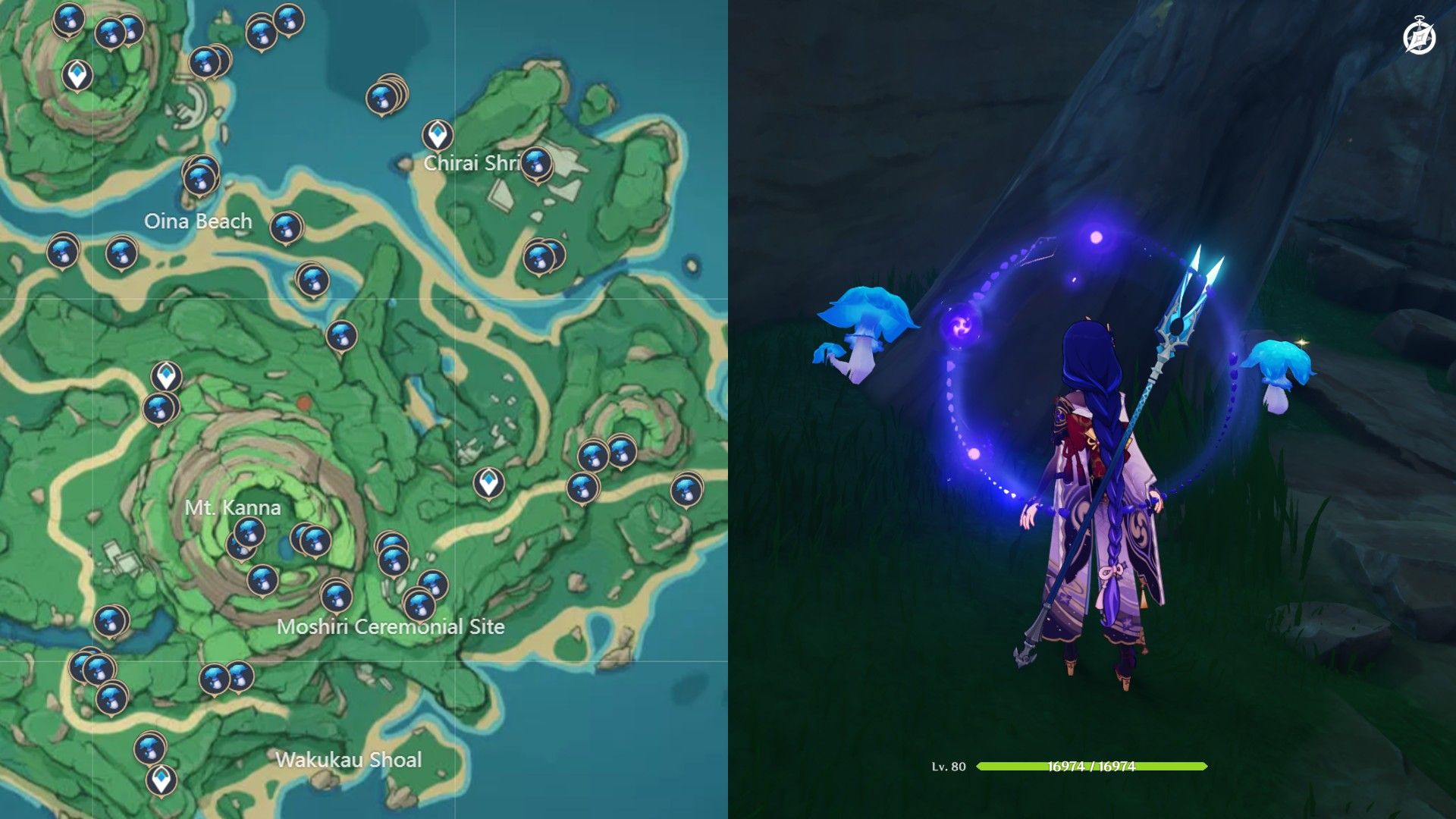 Fluorescent Fungus grows all across Tsurumi Island. They primarily grow near the roots of trees, and they're not too hard to spot since they glow faintly against Tsurumi Island's dark atmosphere.

Fluorescent Fungus is not currently sold by any vendor. 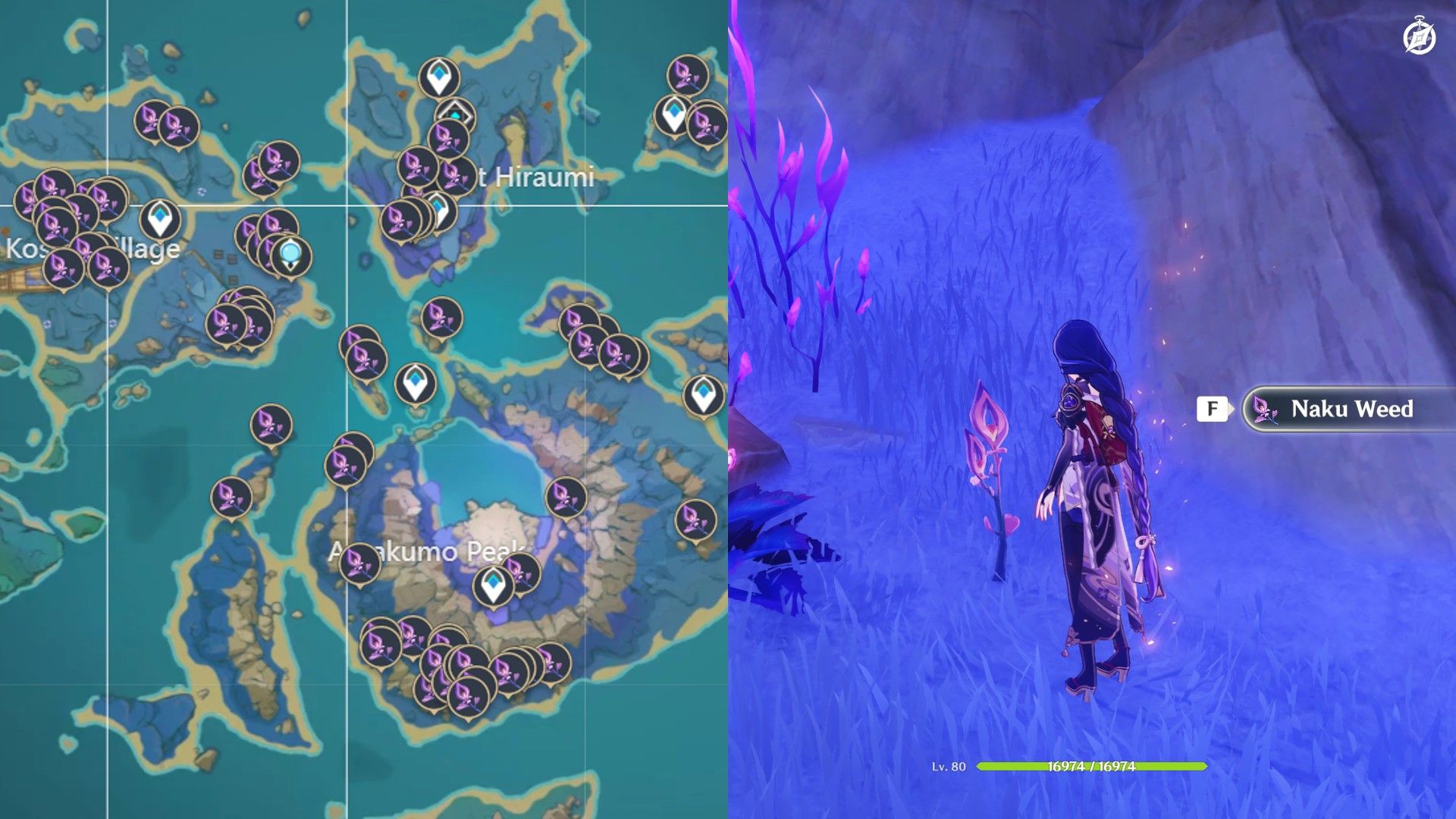 Naku Weed feeds off Electro energy, meaning it can be found in clusters near Grand Narukami Shrine and Tatarasuna. However, Seirei Island boasts an absolute abundance of Naku Weed, making it the best place to search.

Naku Weed can be purchased at Tsukumomono Groceries in Inazuma City at a rate of five Naku Weed per three days.

Yoimiya can make use of Naku Weed for ascension purposes, and early signs indicate that Kuki Shinobu will use Naku Weed as well.

Naku Weed can also be grown in the Serenitea Pot, along with Sea Ganoderma. 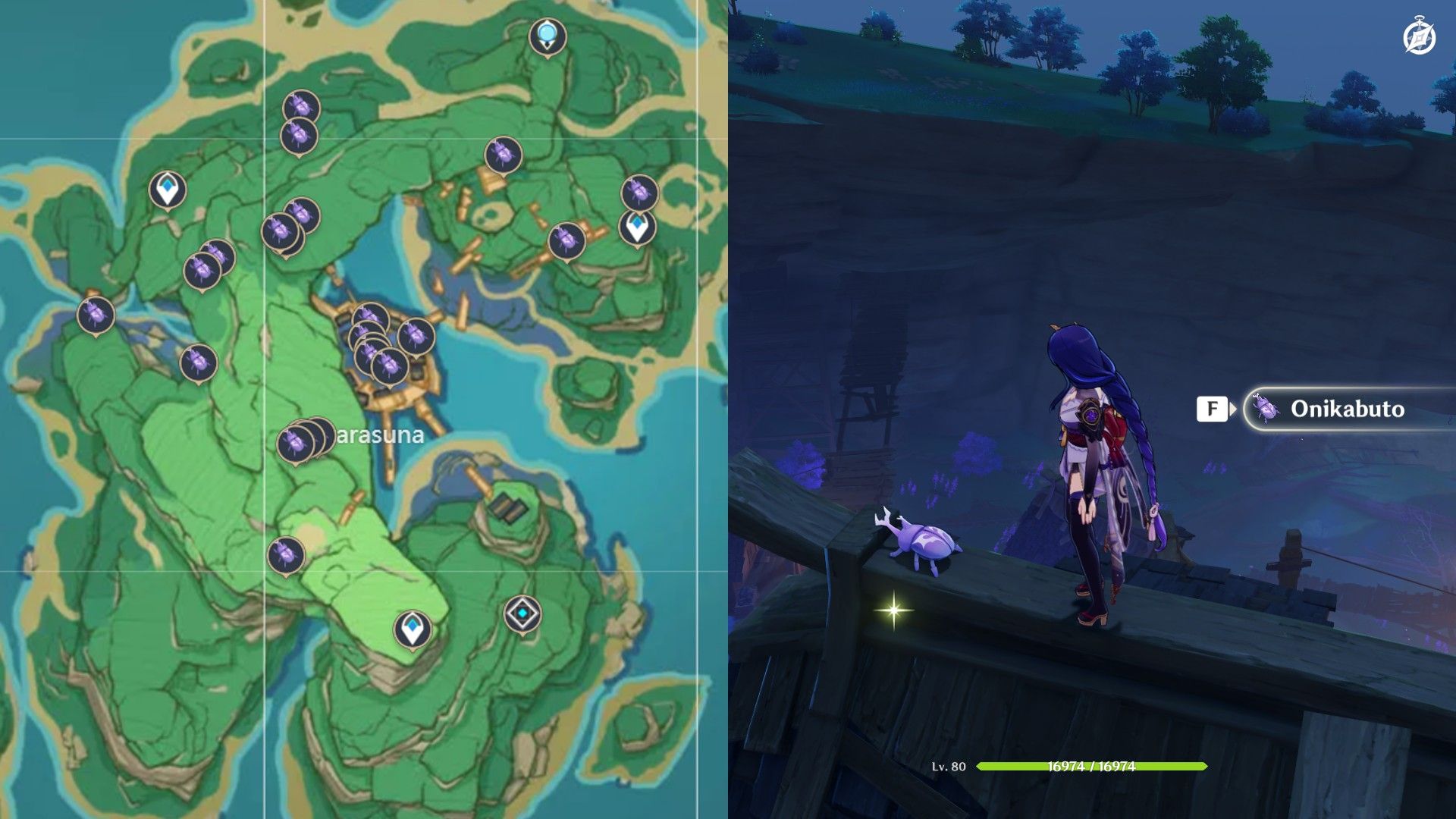 Onikabuto are purple beetles that are typically found on trees or structures near places with high Electro energy. Mt. Yougou and Tatarasuna are good places to begin your bug collection, especially near Mikage Furnace.

Thus far, Itto is the only character who requires Onikabuto for ascension. 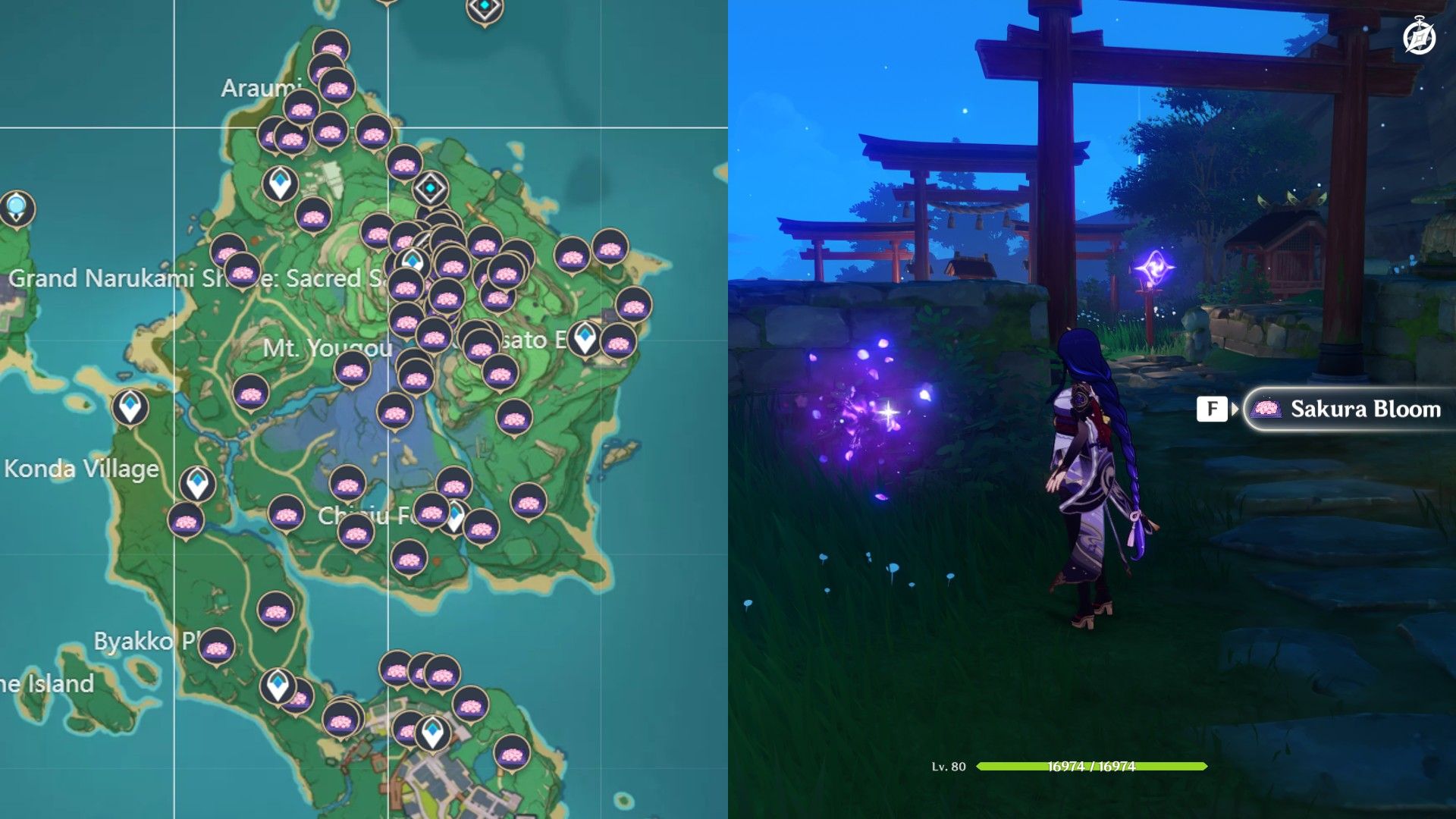 Sakura Blooms are randomly dispersed across Narukami Island. You'll have to travel around quite a bit to collect these, but a comprehensive loop of the island should net you quite a few. Just make sure to bring along an Electro character, since you must hit Sakura Blooms with an Electro attack in order to collect them.

Sakura Blooms are not sold by any vendor.

The Kamisato siblings, Ayaka and Ayato, both use Sakura Blooms for ascension. 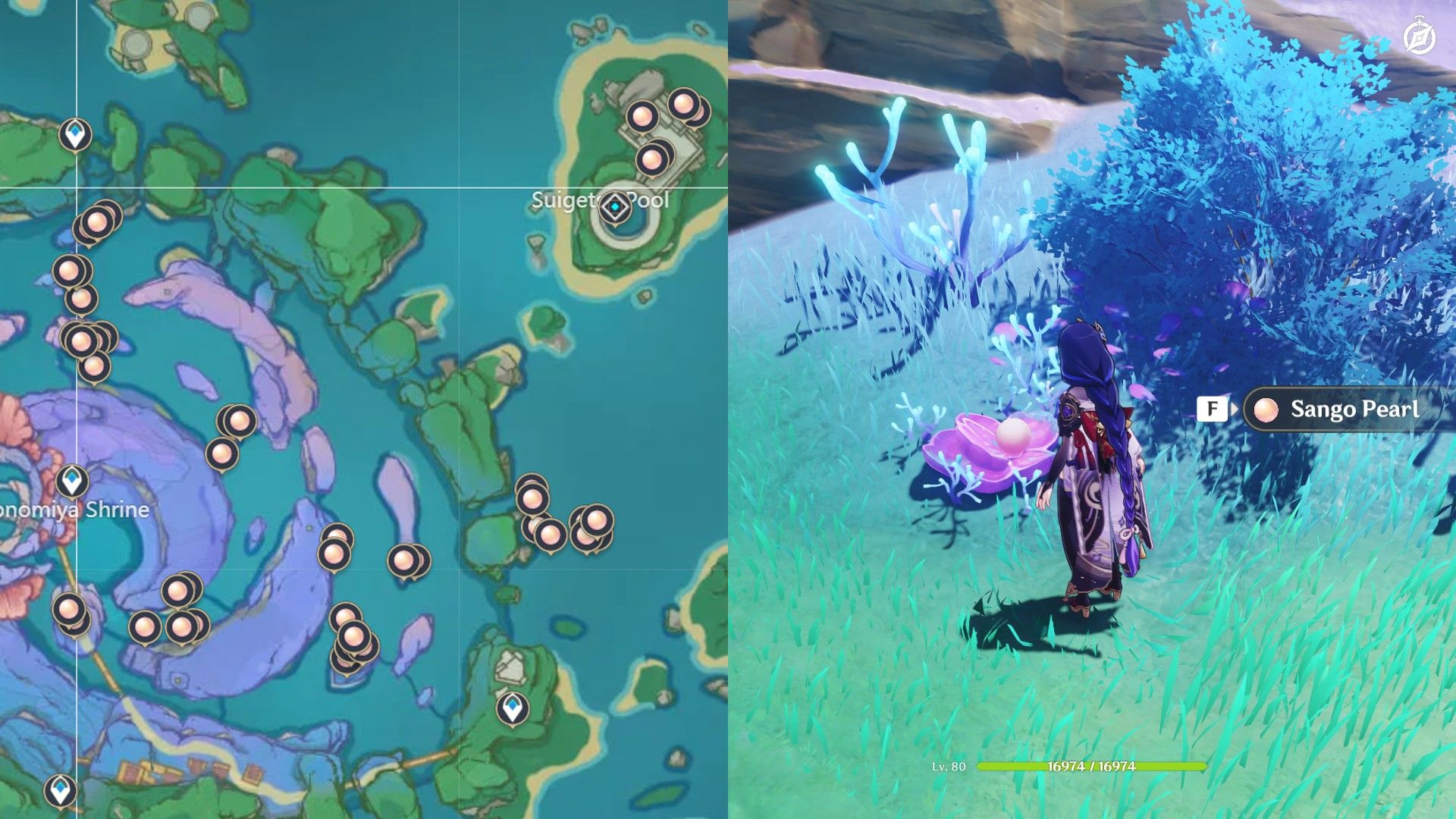 Sango Pearls are best found on Watastumi Island, particularly north and east of Sangonomiya Shrine. Keep an eye out for purple, clam-like flowers (or flower-like clams?) that are dotted across the ground—you'll find the Sango Pearls nestled on top.

Yamashiro Kenta, the "Store Owner Taking Store Name Suggestions" in Ritou, will sell you up to five Sango Pearls per day.

As residents of Watatsumi Island, Kokomi and Gorou require Sango Pearls to ascend. 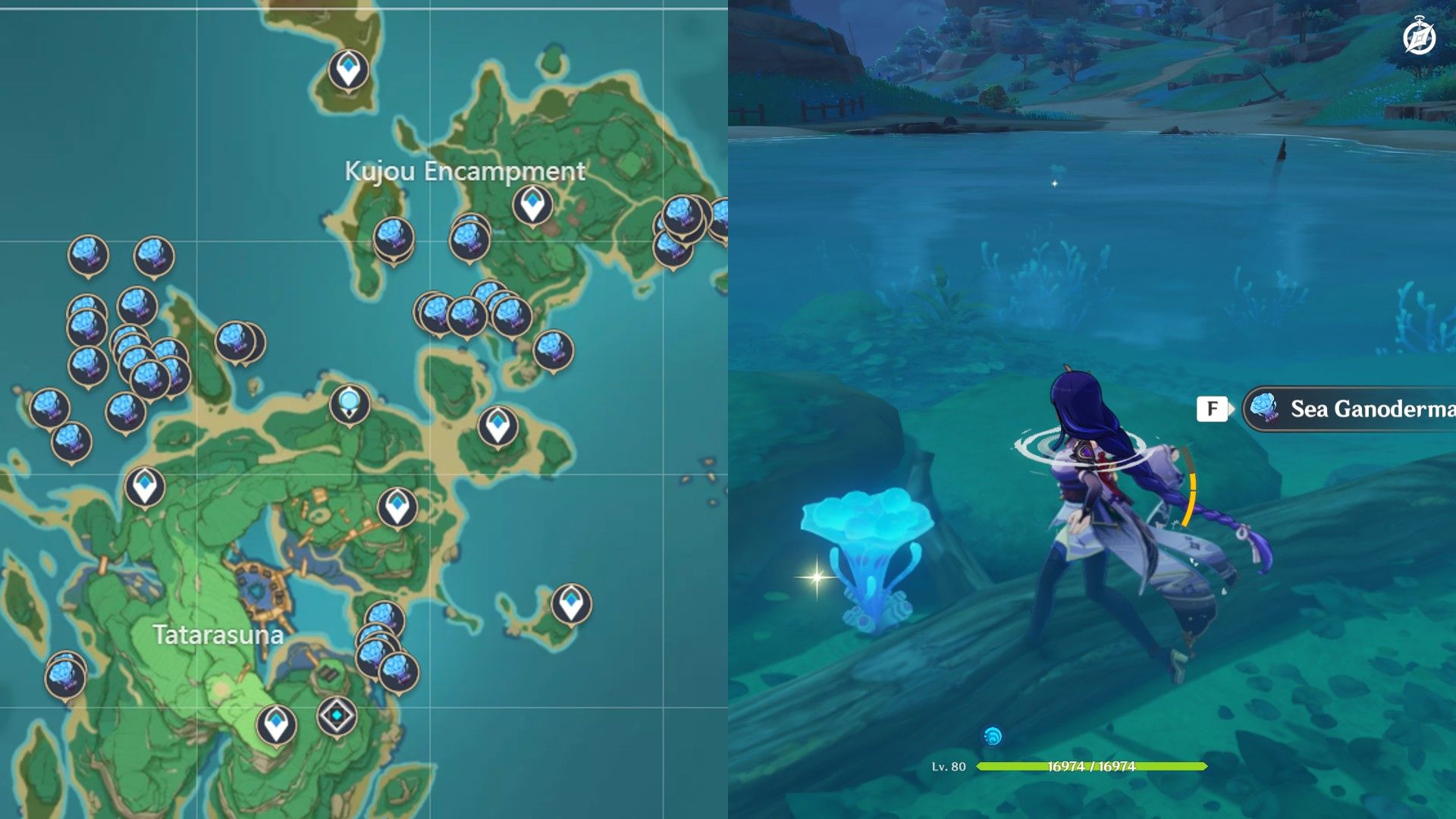 This odd, coral-esque material can be located along almost any beach in Inazuma. That being said, the highest concentration of Sea Ganoderma is roughly between the Kujou Encampment and Nazuchi Beach, so perhaps you should start your foraging there.

An NPC named Obata, who is stationed on the docks of Ritou, will also sell you up to five Sea Ganoderma on a three-day refresh cycle.

Kazuha and Yae Miko both use Sea Ganoderma for their ascensions.