Genshin Impact rolled out its Inazuma region with two charming yet powerful women named Ayaka and Yoimiya. Yoimiya is a five-star Pyro Bow user who can often be found helping out Inazuman citizens in trouble with the Vison Hunt Decree or schooling Arataki Itto in ramen-eating contests. She also is part of the famous Naganohara family and a pro at making beautiful fireworks.

Yoimiya is a DPS character with a focus on elemental damage, meaning she can easily set off reactions with the right setup. Like most characters, knowing which weapons and Artifacts to use for Yoimiya can be a tough task, especially with the game's ever-growing list of each. The guide below is here to give you a head start as you begin crafting the best builds for Yoimiya.

Updated March 19, 2022, by Kyle Gorges: Since her release, Yoimiya has carved out a niche for herself as a strong, ranged DPS character. As Genshin Impact continues to add more enemies that confound melee characters (we're looking at you, Specters), Yoimiya will only grow in relevance. This guide has been updated to make sure her builds are current so she can shine as brightly as her fireworks. 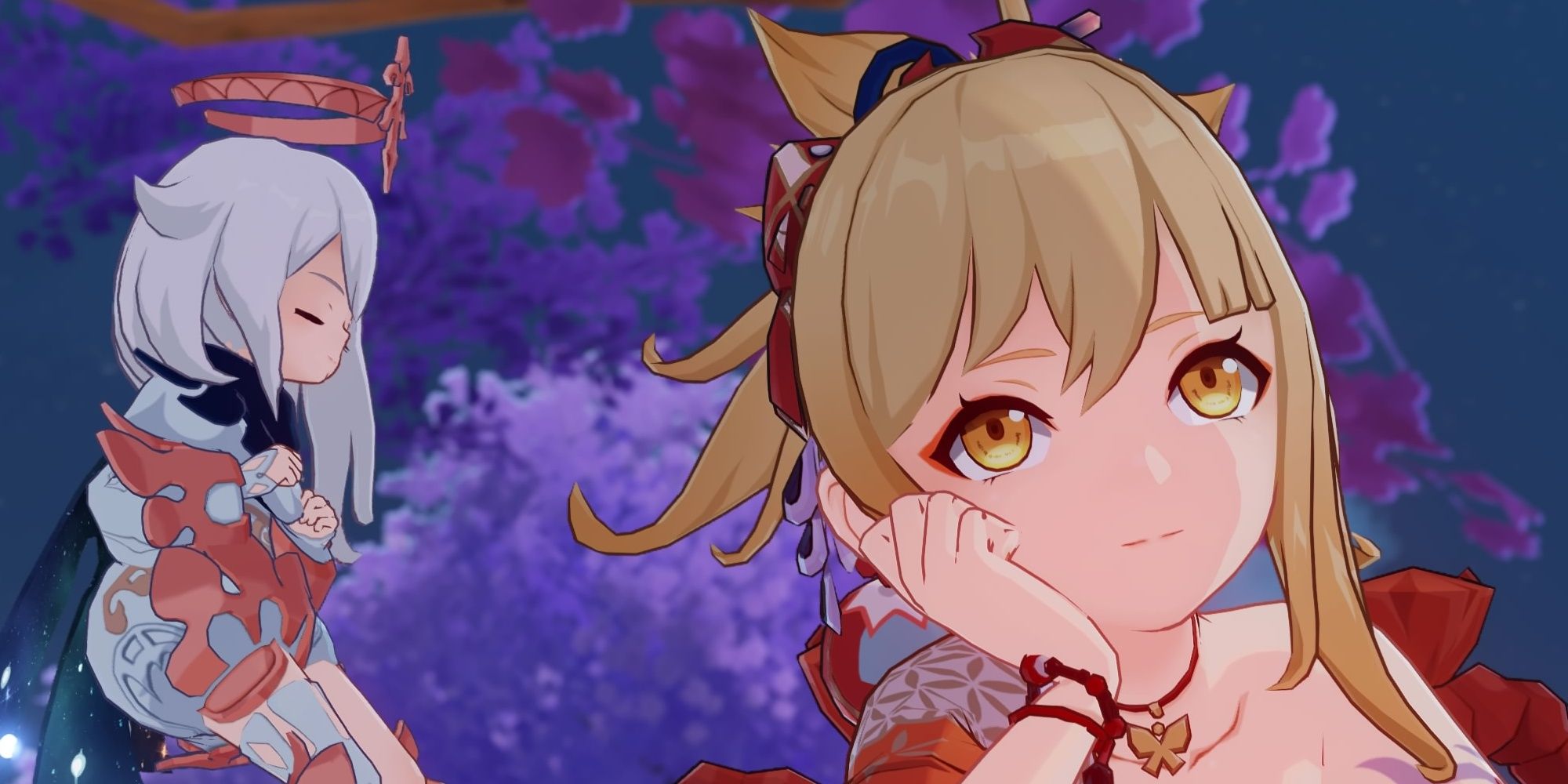 Since her Elemental Skill transforms her Normal Attacks into Pyro-infused arrows, Yoimiya is heavily reliant on elemental damage. The bow that you select for Yoimiya should complement this feature of hers in one way or another for optimal results.

Slingshot is a three-star bow that shouldn't be dismissed if your Yoimiya is in the weapon market. Although its Base ATK is a little lackluster, it has a solid secondary stat in Crit Rate, and its passive synergizes excellently with Yoimiya. Yoimiya loves stringing together lengthy attack combos during her Skill's duration, which is why she is typically paired with a shielder like Zhongli or Thoma. This shield also gives you some freedom to get up close and personal with opponents, meaning that Yoimiya can almost always benefit from Slingshot's bonus. Being a three-star bow, Slingshot is also relatively easy to obtain and raise to higher Refinement levels—definitely give it some consideration if you're lacking higher-rarity weapon options for Yoimiya.

Rust is a four-star bow obtained randomly through the game's Wish system, meaning it can be difficult to acquire. If you manage to snag a couple copies of it, though, there is no better four-star choice for Yoimiya. Rust's passive scales incredibly well with Refinement levels, but even at R1 it provides benefit to Yoimiya through its Normal Attack boost. Yoimiya's Charged Attack is essentially reserved for lighting torches and hitting enemy weak spots; it's a miniscule part of her damage profile, so Rust's damage reduction on her Charged Attack is a non-factor. 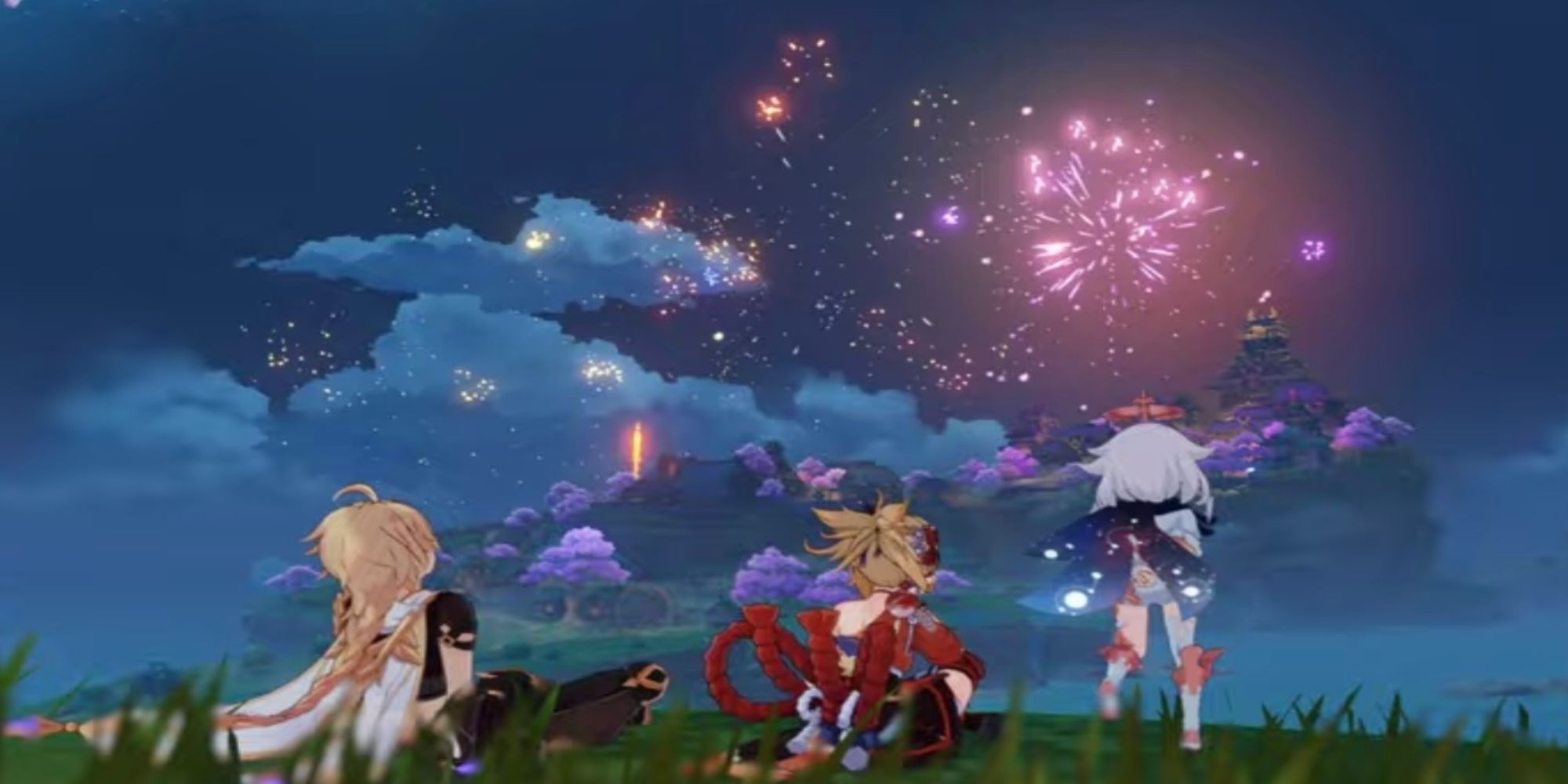 Of course any five-star bow would bump up Yoimiya's damage, but Thundering Pulse is the premier option among them. The bow possesses extremely high Base ATK, a great secondary stat for Yoimiya, and a very strong passive that Yoimiya will have almost 100 percent uptime on. The first two stacks of Thunder Emblem are gained without thinking—just activate Yoimiya's Skill and hit an enemy like you would normally. To ensure you acquire the third stack, make sure you use Yoimiya's Burst before her Skill and Normal Attack combo (although this is what you should almost always be doing anyway).

It's worth mentioning that many players also see Hamayumi as an attractive weapon choice for Yoimiya. Indeed, the weapon is Forgeable, matches Yoimiya's Inazuman aesthetic nicely, and seemingly strengthens her Normal Attacks by quite a bit. However, there are several drawbacks to this weapon that make it a somewhat questionable choice.

In order to get the maximum damage bonus from this weapon, Yoimiya's Energy needs to be full. This contradicts with her usual gameplay pattern of starting off with her Burst, meaning you must sacrifice damage from her Normal Attacks or ignore her Burst until the end of her combo. This tradeoff can be managed, but it's a caveat that none of her other bows have to deal with. Additionally, Hanayumi only really shines at higher Refinement levels, and while it is craftable, this process can be quite expensive. 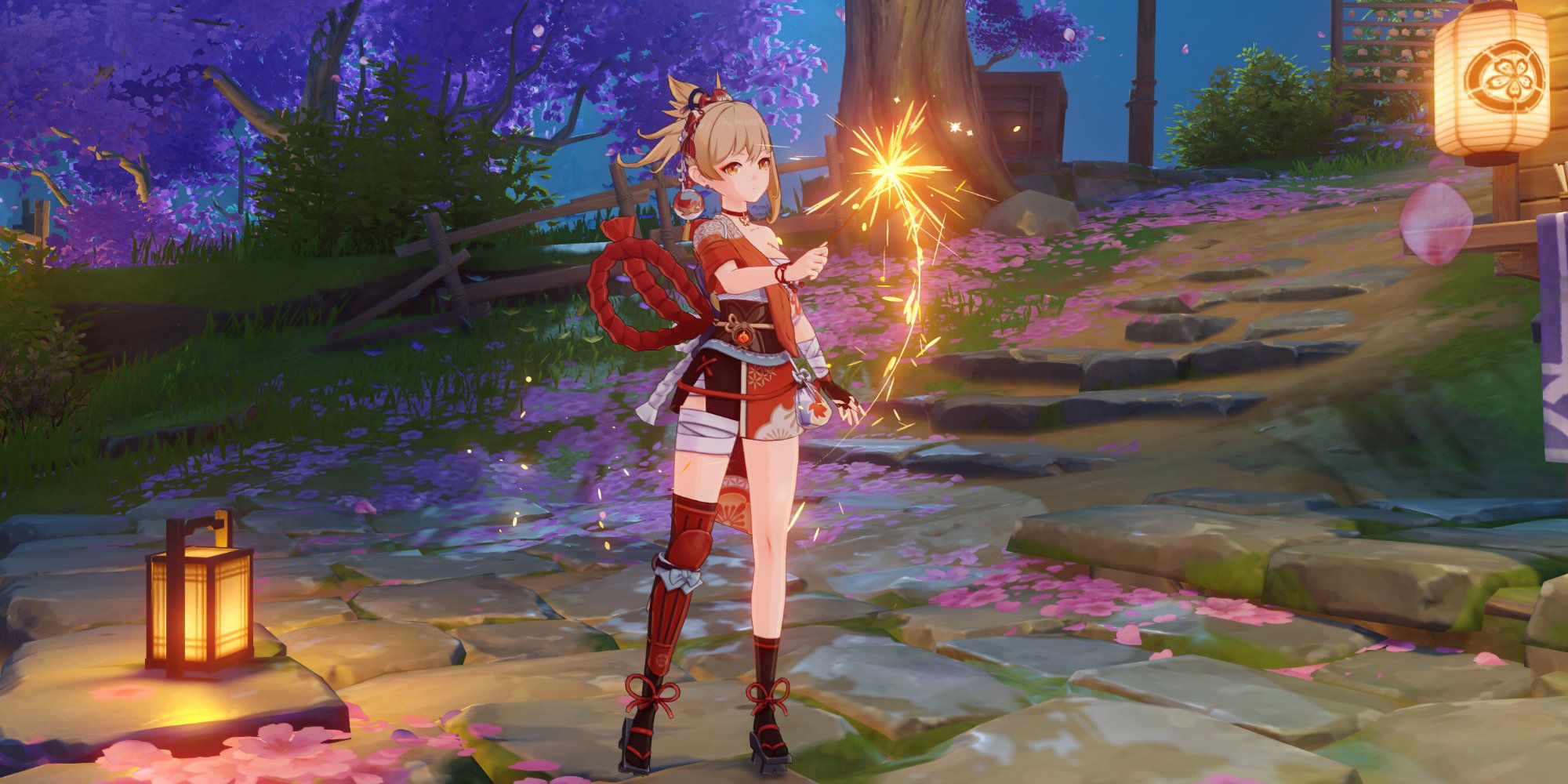 Along with a solid bow, you will need to equip Yoimiya with a proper Artifact set if you want to shower some Hilichurls in sparkles. Fortunately, Yoimiya has a few options to pick from.

As a main DPS character, Yoimiya seeks the offensive stats in her Artifacts that you'd expect. ATK% Sands, Pyro DMG Bonus Goblets, and Crit Rate/DMG Circlets are the play here. EM Sands can work if Yoimiya is triggering a lot of Reactions for your team, especially when paired with a character like Bennett who already boosts her ATK, but the difference in damage largely comes down to substats at that point.

Speaking of substats, it should be no surprise that you want Crit Rate/DMG, ATK%, EM, and ER as your desired rolls. Crit Rate/DMG should be as high as possible while aiming for a 1:2 ratio. Yoimiya's ideal ER stat can vary a lot depending on her teammates, but try to get enough so that you can use her Burst both at the beginning and end of her rotation. That way, she can benefit from her Burst's ATK boost while active, and also pass on the buff to your party when she switches out.

Farming Artifacts for Yoimiya is a little easier than most characters because her best sets have some overlap. As a generalist set, two pieces of Crimson Witch of Flames and two pieces of any ATK-boosting set (Shimenawa's Reminiscence, Gladiator's Finale, etc.) is a fantastic option. This Artifact mix gives Yoimiya competitive damage without being tied to a specific playstyle or team composition.

Opting into four-pieces of Crimson Witch of Flames is Yoimiya's best choice when using her on a team with frequent Reactions. It will make all her Reactions hit harder and is especially viable on Vaporize teams with Xingqiu or Overload teams with Fischl, for instance.

Four-piece Shimenawa's Reminiscence offers slightly higher personal DPS for Yoimiya, but at the cost of less Burst uptime. It can be a good choice if you haven't invested into leveling up Yoimiya's Burst, but usually this set results in an overall loss of team damage. The Energy drain can be worked around, but it probably requires Yoimiya to have more ER than ideal. Still, it's not a bad set, especially if your Artifacts have exceptional substats. 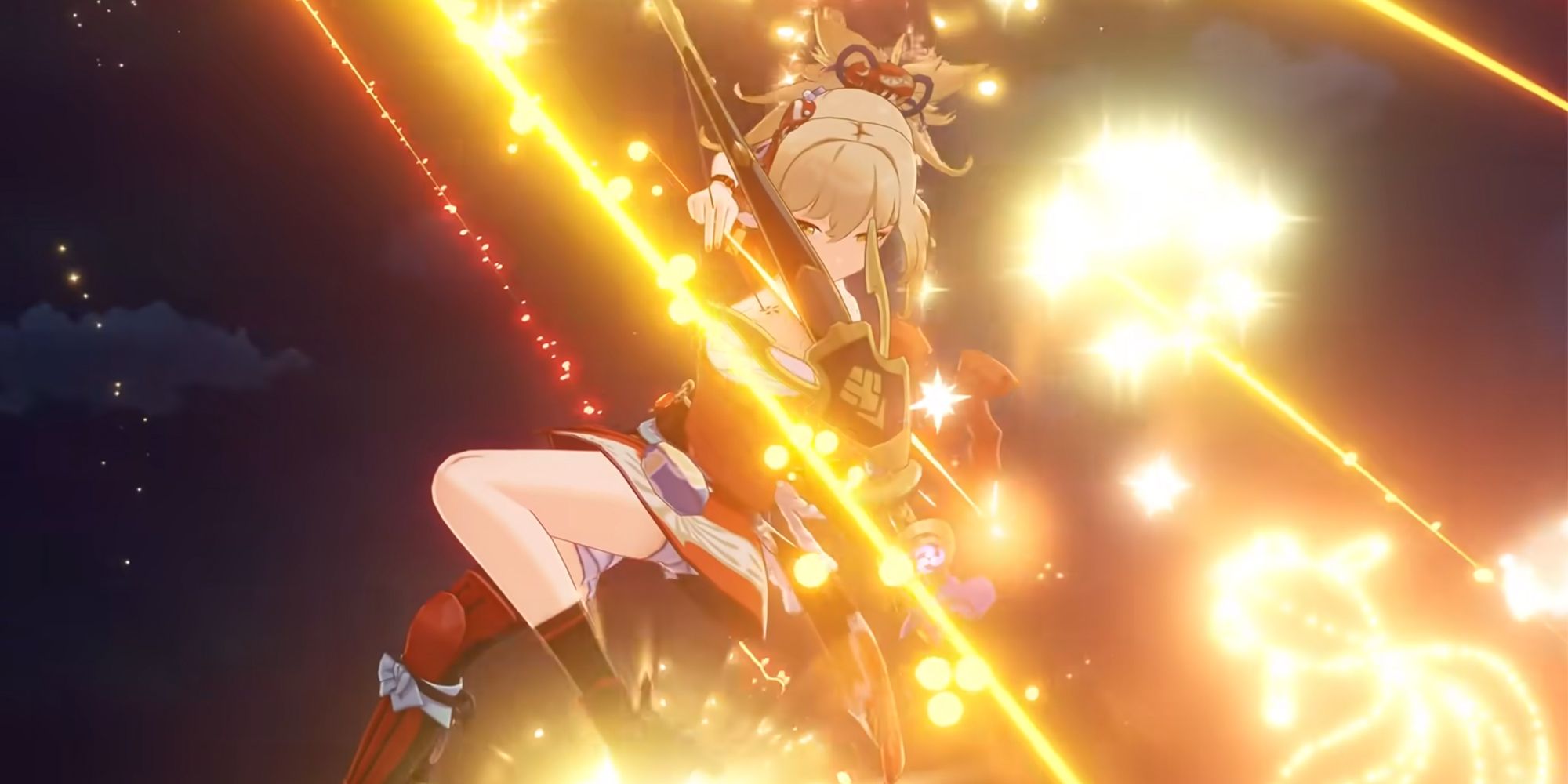 When it comes to Yoimiya's Talents, you definitely want to prioritize her Normal Attacks. This is where the vast majority of her damage comes from and is the cornerstone of her playstyle. It's a bit of a toss-up between leveling her other Talents, though; her Skill is necessary but scales rather poorly, while her Burst scales well but isn't an emphasized part of Yoimiya's kit.

If you truly want to become a pyrotechnics aficionado, you might consider investing in Yoimiya's Constellations. Her C1 increases the efficacy of her Burst while her C2 slightly boosts all her Pyro damage. C4 increases the availability of Yoimiya's Skill but is not particularly interesting otherwise. C6 is definitely Yoimiya's most exciting Constellation since it allows her to shoot off extra arrows, inflicting extra damage against enemies and adding extra fanfare to her fireworks display.