As we continue through the intricate story of Gorogoa, the game becomes more apparent and increasingly mysterious at the same time. The fourth chapter unravels these mysteries even further with a series of portraits that may illustrate an essential passage of time. However, whether or not the scenes depicted here are related to our young protagonist has not been revealed.

After finishing the third chapter, the boy will walk out of frame, leaving you with this series of panels: 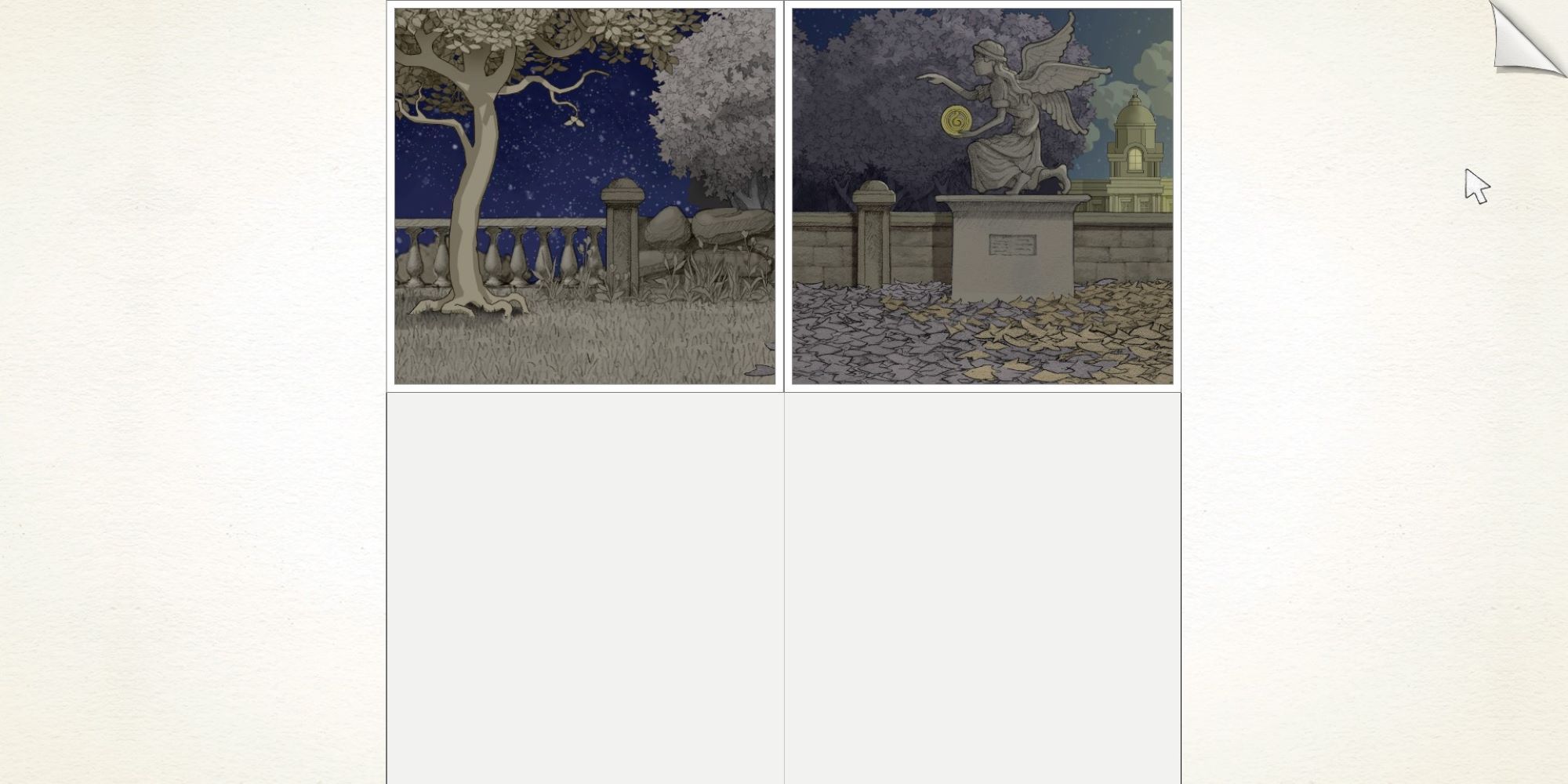 Chapter Four begins after you follow the boy by clicking the right button in the left panel. After he ponders the blue fruit, zoom out to reveal a wall of portraits. Your goal is to travel through each photograph to reach the blue fruit in the last photo. 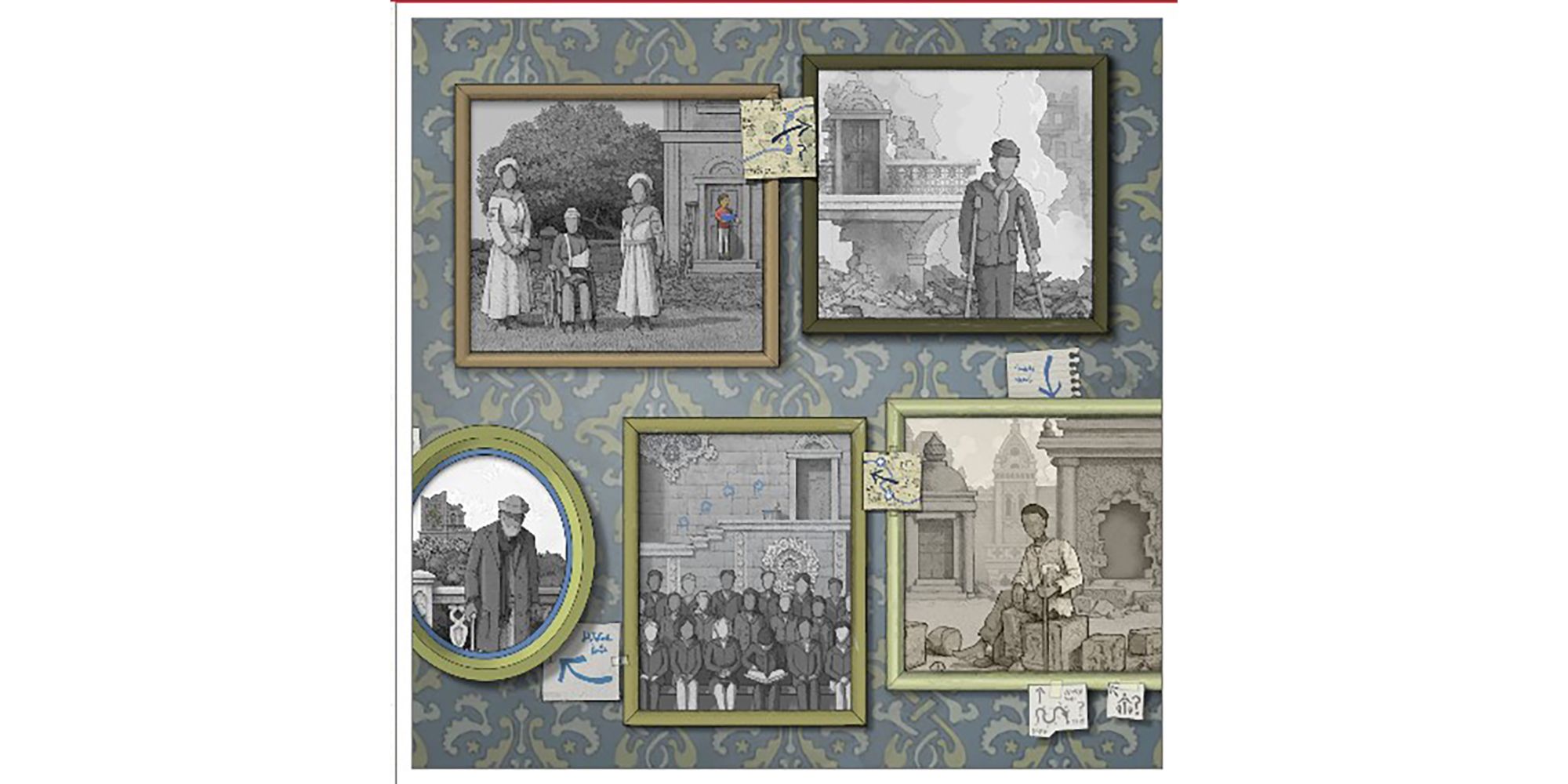 How To Get To The Second Photo 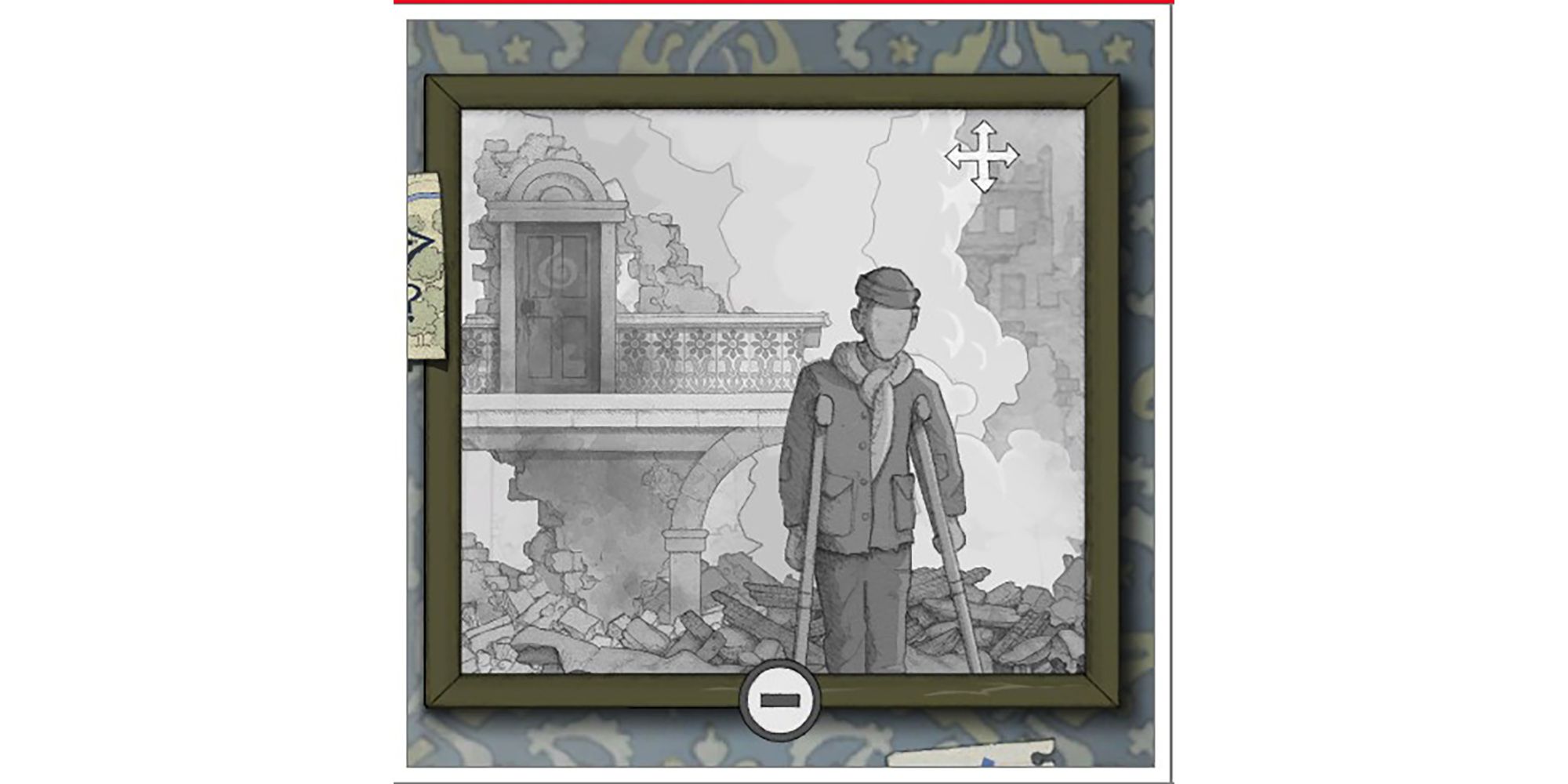 Now that we established our goal let's examine the other panel. There are a few discoveries you need to make. Clicking the left button and zooming out back into the young man's room will reveal him dreaming of the young boy falling. Remove a layer from this panel to see a new scene with a middle-aged man imagining the same thing. The middle-aged man's thought bubble will then reveal a map. Remove the middle-aged man layer to gain access to the whole map.

Different parts of the map will expose themselves depending on the panel's placement. For example, move the map panel to the lower-right corner. Then, you will see an emblem of a person holding beads. Next, zoom in further towards the mountain and further towards the staircase. And just like that, we have stairs! All that's left to do is overlap them with the boy's panel so he can climb them to the next photo.

How To Get To The Third Photo 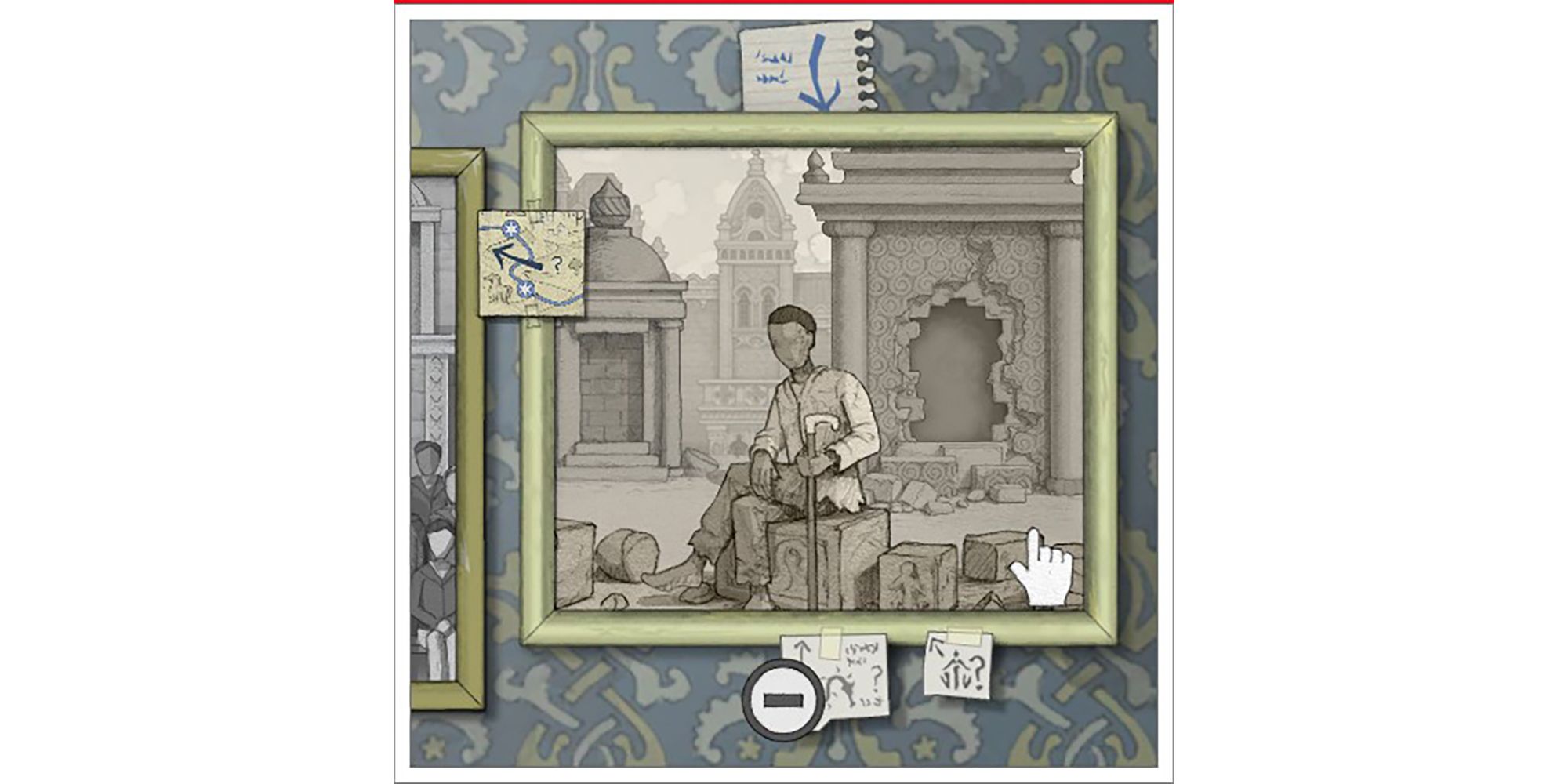 Now that you've made it up the stairs, you can remove the stair panel and follow the boy to the next photo. A lot of animations will happen after you remove this layer. First, the staircase panel will transition to nighttime. Second, the middle-aged man will uncover three essential tools: a watering can, a bell, and a candle. These will all become rather important as we continue through the chapter.

The only way to the following photograph is down. This route may seem odd at first, but not to worry, there is a hidden passage that will get you there. First, you have to zoom out of the staircase panel to reveal a new picture of a man holding beads. After that, zoom out again, and you'll see four different illustrations arranged in a circle. See the upside-down picture of the man holding the bell? The hidden passageway lies there. First, however, you need to move the picture to align with the passageway in the third photograph. Luckily, you can use the middle-aged man's bell for this task.

To access the hidden power of the bell, first, you need to zoom into it as much as possible. Then, click the up button to reveal an animation of a boy with a cane walking through a desert and ringing a bell. Then, place that panel into the lower-right corner.

The next part of this bell puzzle requires you to return your focus to the young man's room. Click on the bookshelf behind him, and then click on the tan book. See how it has a bell on it? If you zoom in further on the book spine's picture, you will enter another part of the desert castle tableau. Make sure this panel gets placed in the lower-left corner. Lastly, move the four illustrations directly above the book spine panel if you haven't already. Your finished portrait will look like this: 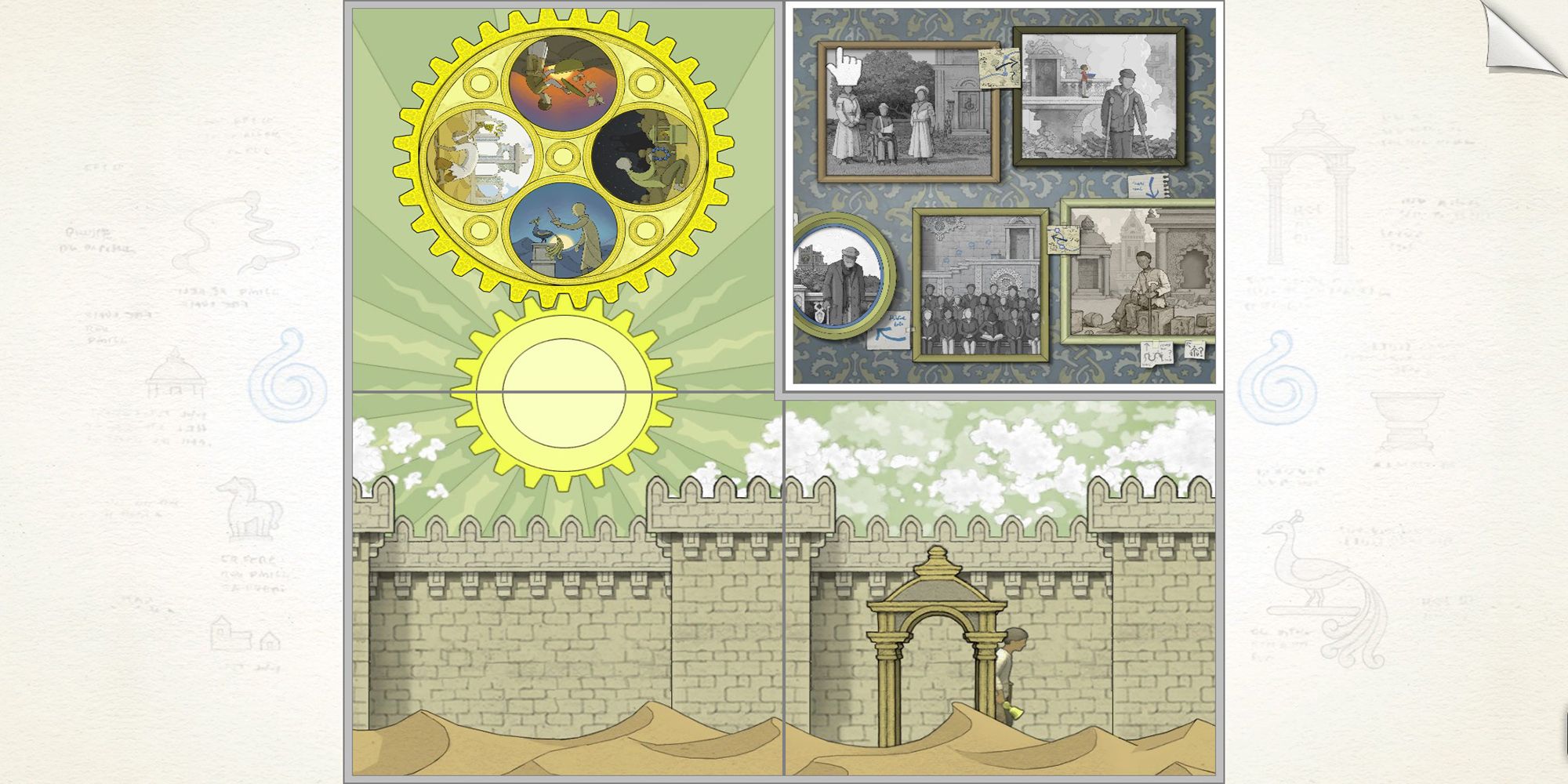 At this point, a gear effect will rotate the illustrations on the gold wheel. Wait through one animation, so the passageway illustration is on the left side of the wheel. You can establish the path that leads the boy to the third photo from this point.

To create the path to the third photo, first, zoom in and connect the passageway and second photo panels, so they align and create a balcony, like so: 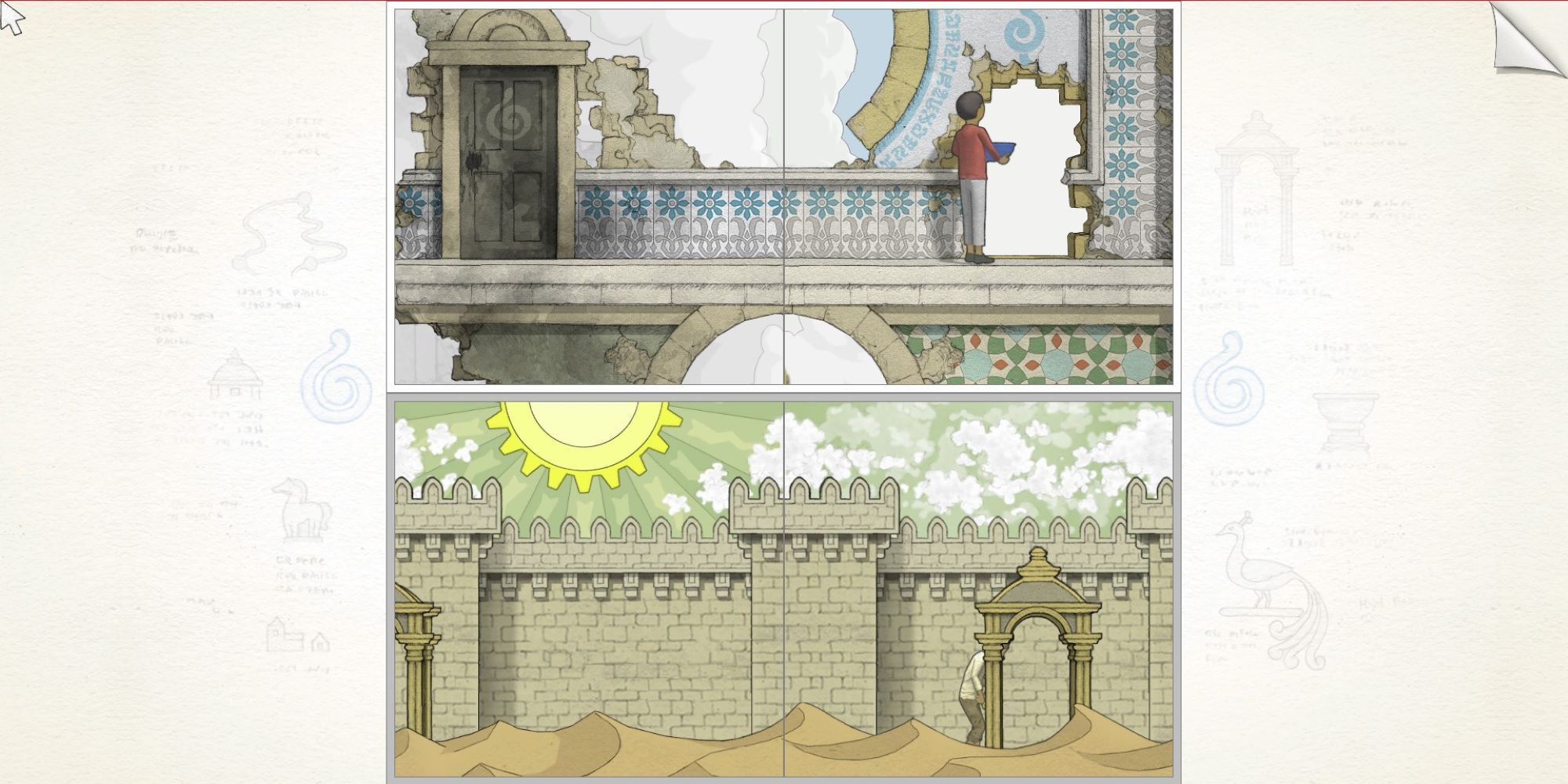 How To Get To The Fourth Photo 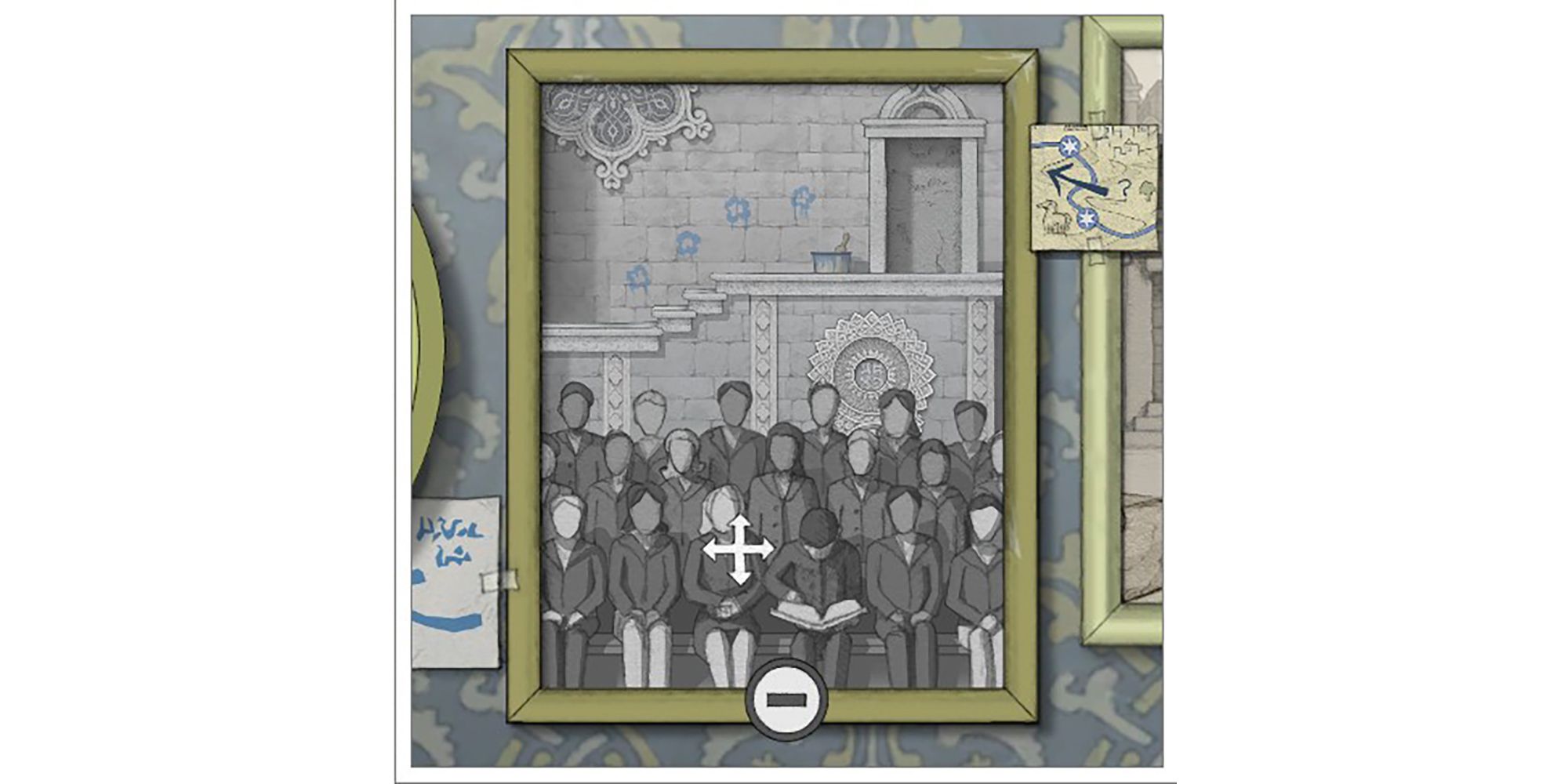 Moving the stained glass wheel works similarly to the golden wheel puzzle. This time, you need to go back to the middle-aged man's tools and zoom into the candle as you did with the bell. Then click the down button to reveal a boy pushing a wagon and placing candles on a stack of stones. From there, zoom in on the wheel itself. Place the stained glass circle over the wagon wheel, and the fixture will move the stained glass. Your finished wheel should look like this: 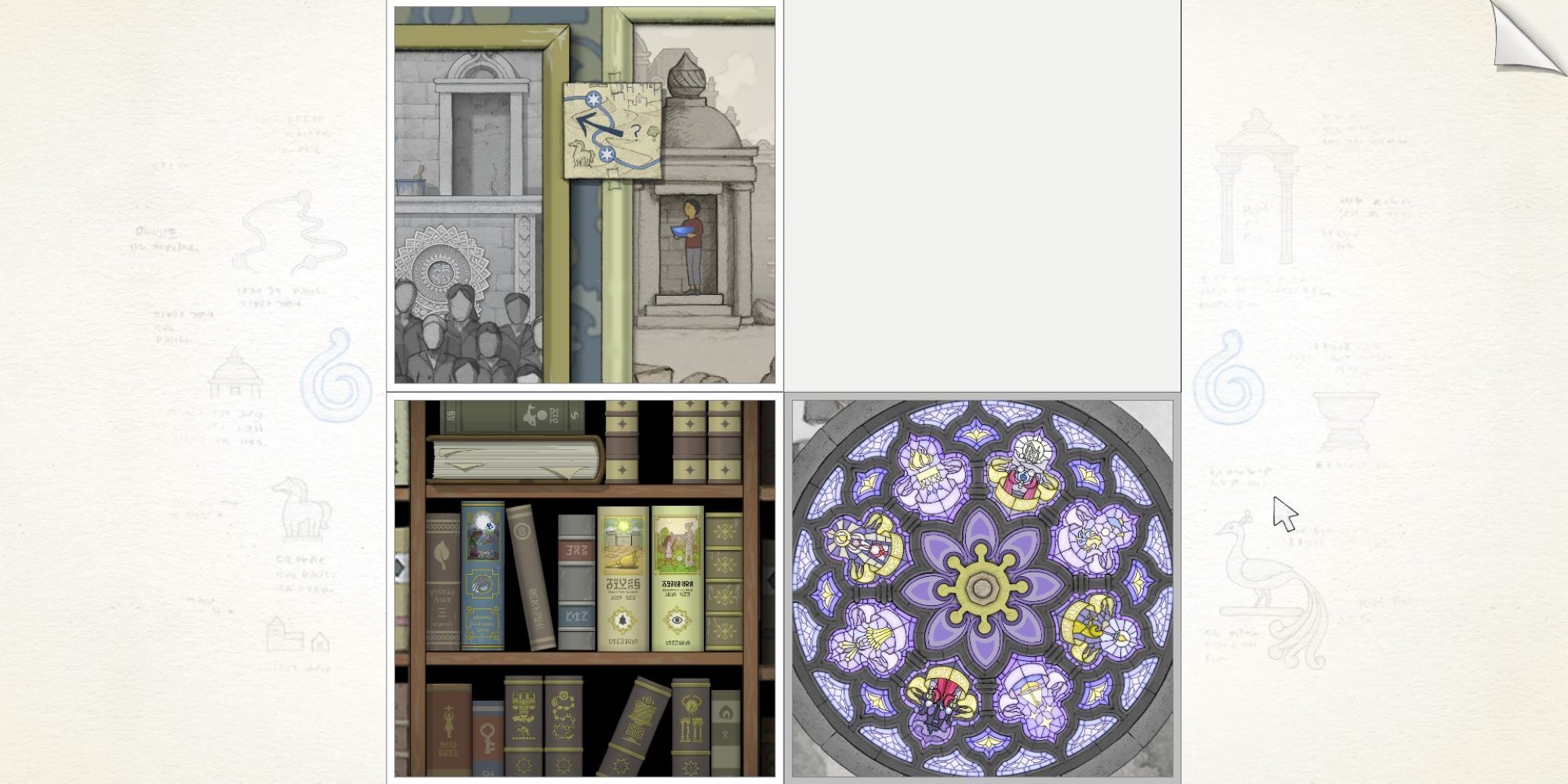 After the wheel has turned the staircase picture upside down, you can remove the stained-glass pictures from the wagon wheel panel. Then, zoom into the staircase illustration and layer it over the panel with the boy and the fourth photo. After removing the staircase layer, the young boy will enter the photograph, and you can move on to the fifth photo puzzle.

How To Get To The Fifth Photo 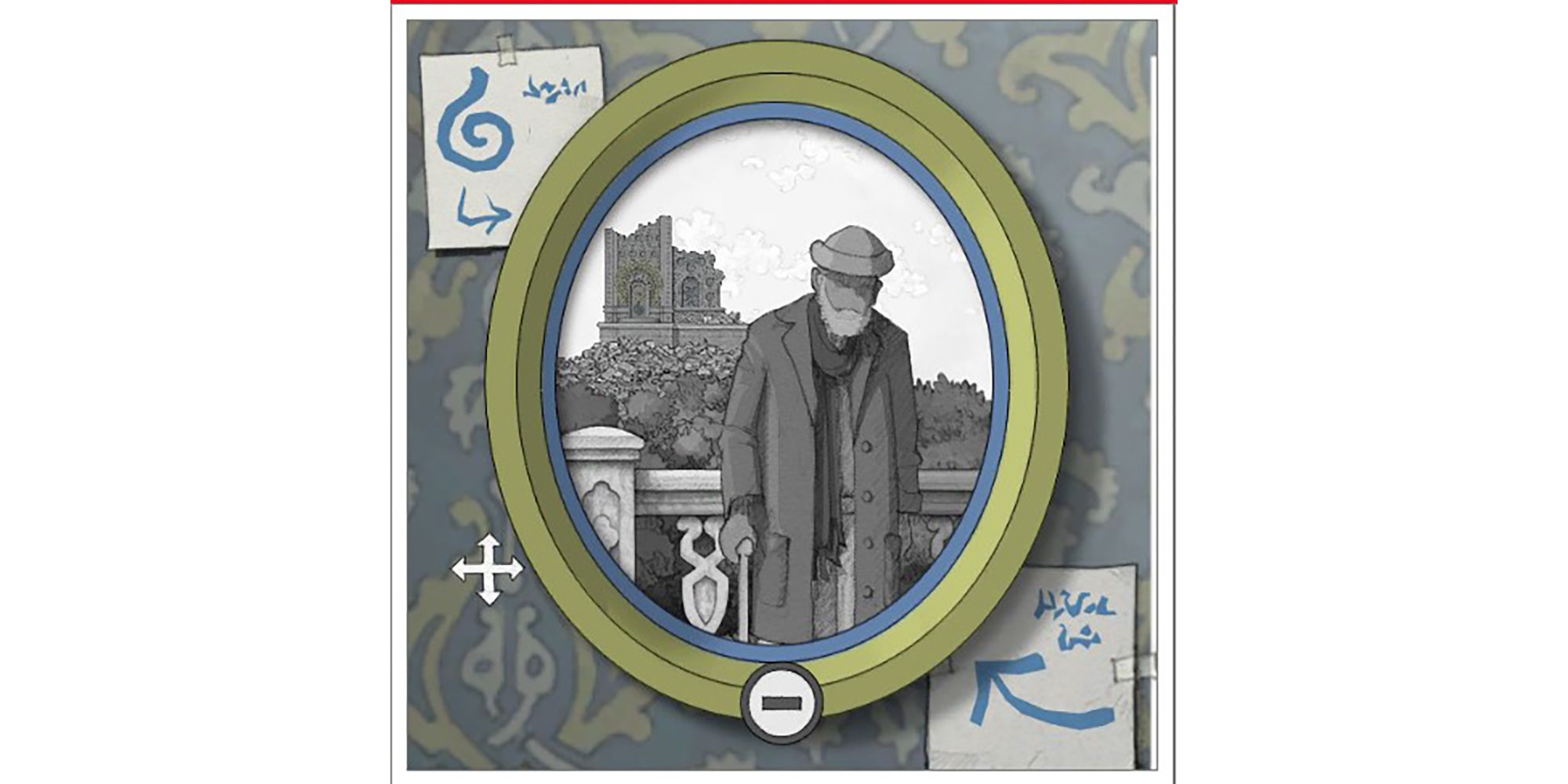 In the fourth photograph, there is a path marked with blue paint. Completing the path will lead you to the fifth and final photo. If you've been following the pattern of the last two photographs, completing this puzzle will take no time at all.

After zooming out of the staircase illustration, you will reveal another quartet of illustrations arranged in a blue wheel. The passageway lies in the left-side illustration. However, unlike the past illustrations, you need to position this picture upright.

Positioning the passageway upright requires a similar gear mechanism as the past two puzzles. First, zoom out of the blue circle to reveal a china plate. Then, go to the bookshelf in the young man's panel and zoom into the blue book spine. After that, place the book spine panel over the china panel. Now you finished the first part of the mechanism.

The second part of the mechanism requires you to zoom into the water pail on the middle-aged man's table. Doing so will reveal a mountain surrounded by clouds. Click the right button in the mountain panel to pan on a boy walking up a flight of stairs and washing his head with water. A giant hole is among the clouds behind the boy. The two blue wheels will fit into the giant hole if you place this panel on top of the book spine panel. As the boy walks up the stairs, the steps will turn the flower petals, which will spin the plate. 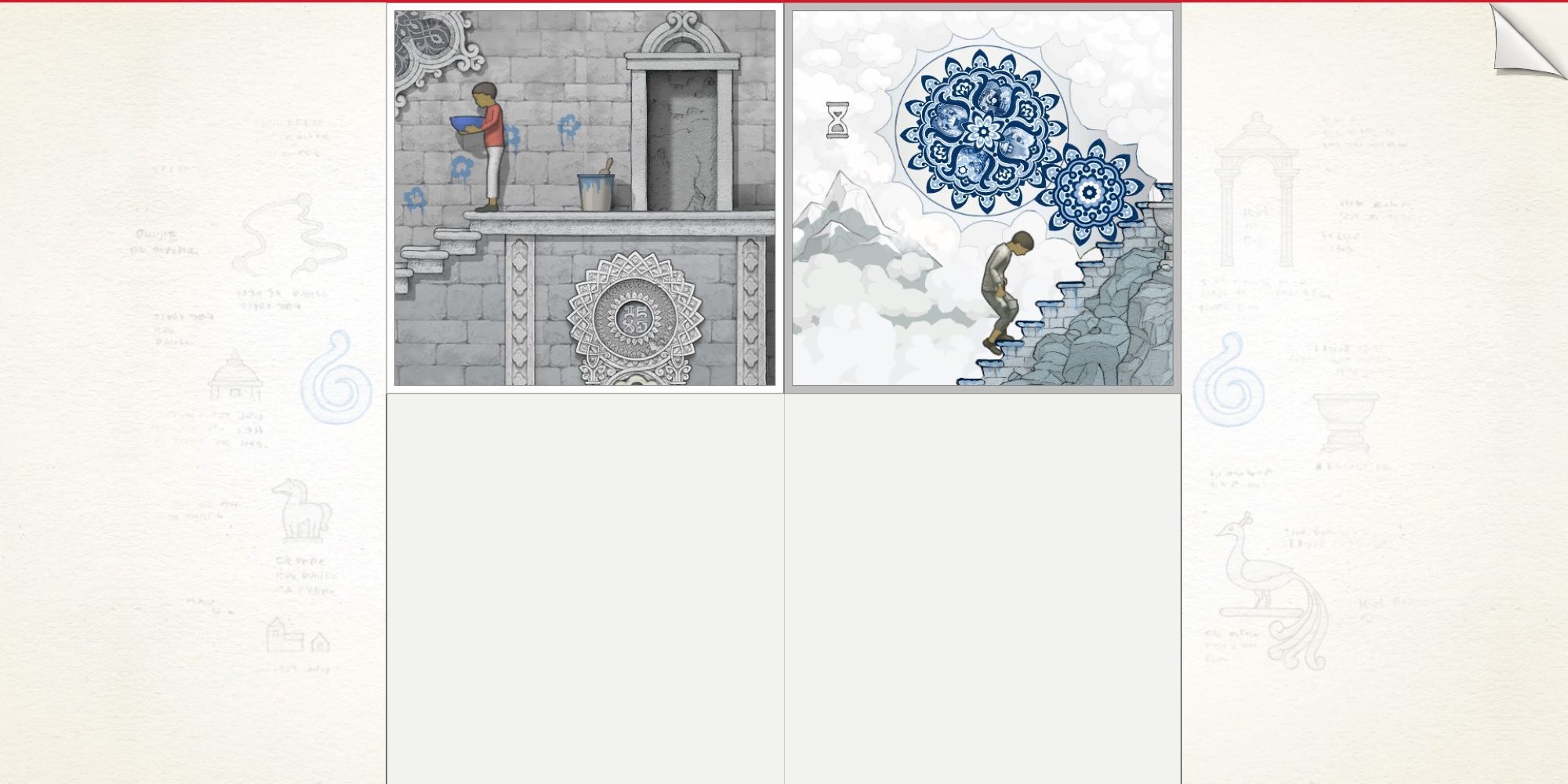 Once the passageway illustration is upright, remove the two layers and zoom back into the passageway. Then, all that's left to do is align the two passageway panels like this: 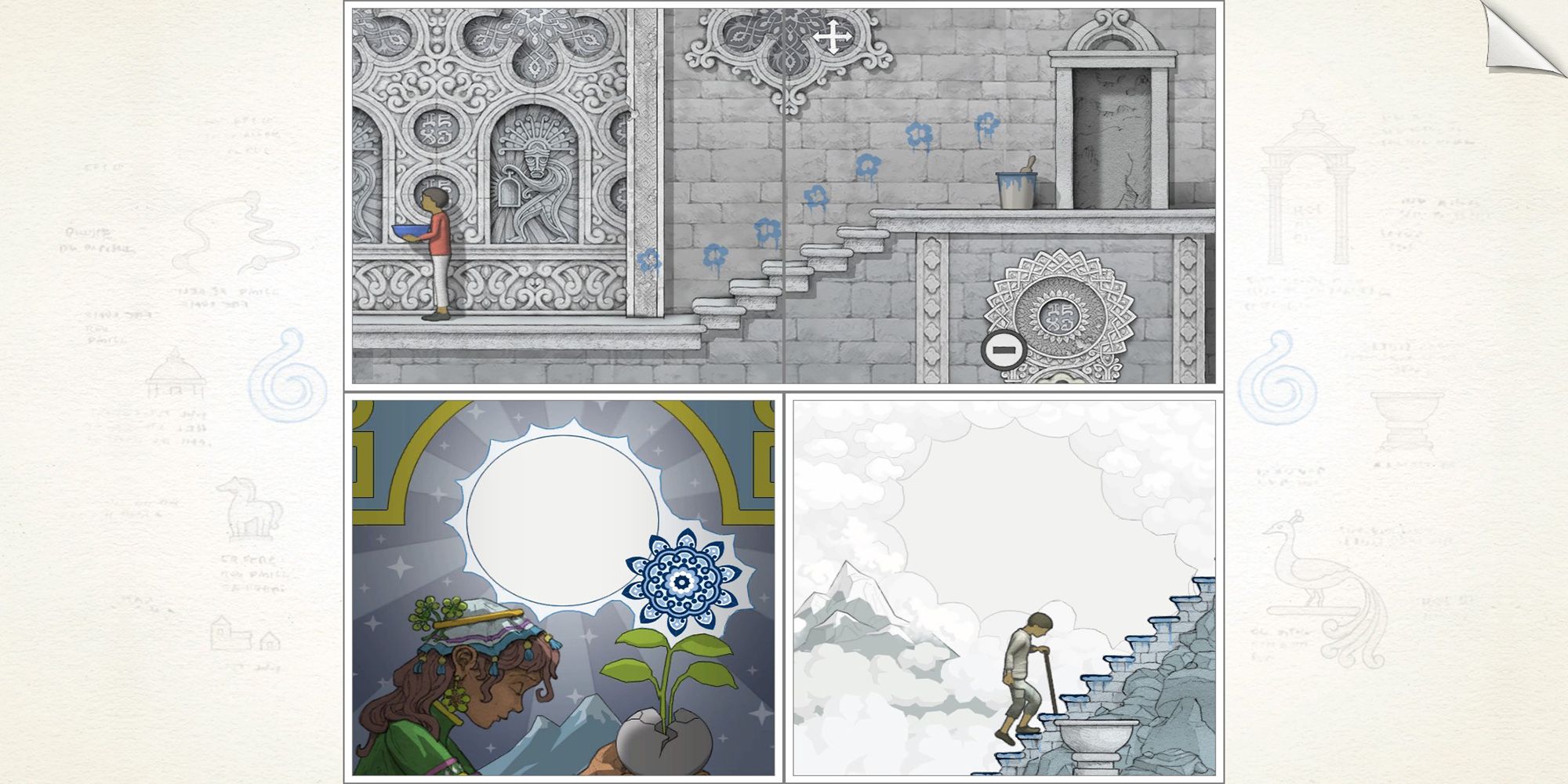 How To Get The Fourth Fruit 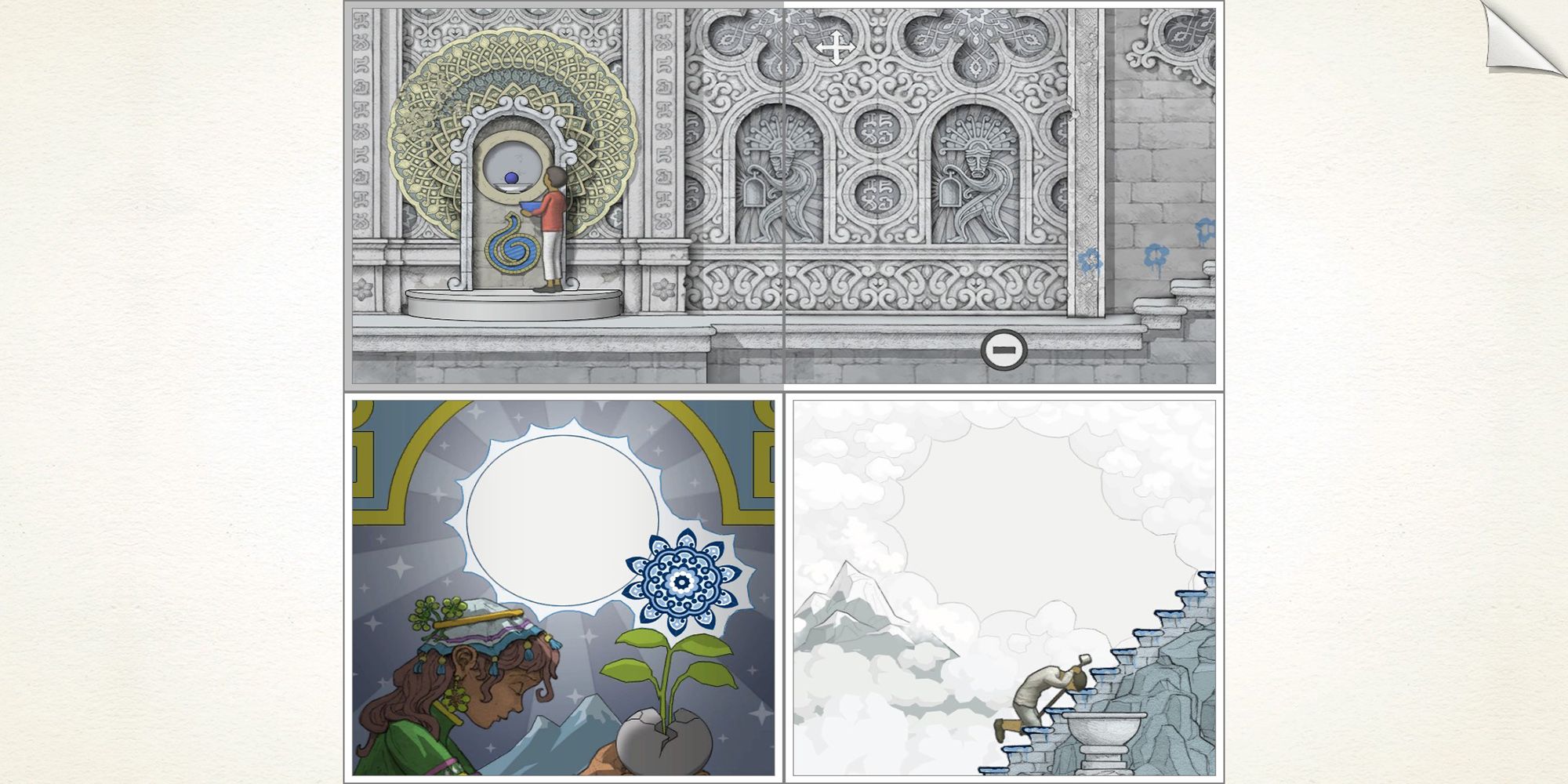 The rest of the path to the fourth fruit is straightforward. First, zoom into the fifth photo from the wall of portraits. After that, click on the altar with the piece of fruit. Finally, connect that panel with the left side of the paint-marked passageway that you just finished. Then, the boy will walk over to the altar and place the fourth fruit in his bowl.