GTA 5 Online Alien Suit: How to get the Alien Suit and Baseball Bat in GTA Online 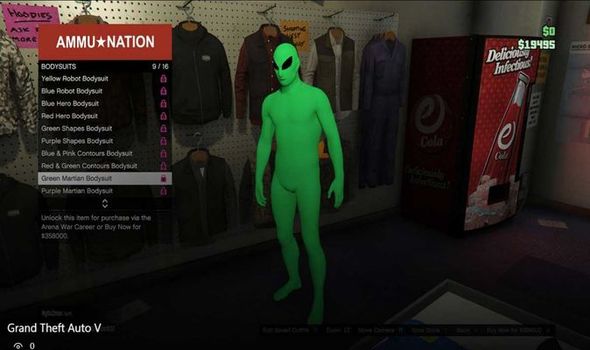 The good news is that getting a GTA Online Alien Suit is very simple but the bad news is that it is not a cheap option. Griefing has always been a big part of GTA 5 Online and it’s easy to get caught up in a rivalry while playing multiplayer. But a new trend has appeared that has players banding together in a new way on PS4, Xbox One and PC. This trend started a few weeks ago but is now growing to epic proportions and most players have now seen at least one “Alien Gang” while playing.

For those who might not have witnessed the spectacle yet, GTA Online gamers have started banding together while wearing Green Alien Suits and using baseballs to take down random players.

For the higher level enemies with more resources, other weapons are being used to cause mayhem in GTA Online.

So don’t be surprised if you’re suddenly set upon by an Alien Gang riding in an Oppressor whilst trying to complete your freemode activities.

HOW TO GET THE ALIEN SUIT IN GTA ONLINE

The good news is that buying and wearing the Alien Suit in GTA Online is a simple task, if you have enough cash.

The Alien Suit was added to the game as part of the Arena Wars expansion and can now be bought from most clothing store in-game.

It can even be picked up from an Ammu-Nation gun shop, and will be found under the Outfits: Arena War section, and then the bodysuit category.

The only drawback is that the Alien Suit is an expensive buy, costing over $300,000 in in-game cash. The alternative is to unlock the item via the Arena War Career but that also means spending serious cash.

The good news is that Rockstar Games is giving away around $500,000 to all gamers in May.

All you will need to do to earn the extra reward is to login into the game during the current month.

A message from Rockstar Games adds: “Starting May 1st, play GTA Online throughout the month of May for a one-time gift of GTA$500,000.

“The GTA$ will be automatically sent to your Maze Bank Account within seven days.

This week’s GTA Online update also features discounts on laser tech weaponry, new Double and Triple Rewards for the racing or illicit business-minded, along with the latest Lucky Wheel vehicle and discounts.

Business owners can also score double the rewards for selling special cargo, while Business Battles will be offering triple rewards, making them a risky way for those who fancy a challenge.

While the Alien Suit is easy to find in GTA Online, the baseball that goes with it is a bit more cryptic.

The GTA Online Baseball Bat is available to add to your loadout for free, if you can find its location.

This is the weapon of choice for the new Alien Gangs but it isn’t quite as important as purchasing the costume itself.

The easiest way to earn one is by completing a Contact Mission with your chosen character in GTA Online.

Both the Lamar mission – Where Credit’s Due and the Simeon mission – El Burro Heists, are confirmed to include Baseball Bats.

Another option is to just join or create a Deathmatch game featuring one via the Content Creator.

It has also been reported that one can be found at the baseball diamond in Richmond on home plate, which is close to Michael’s home.