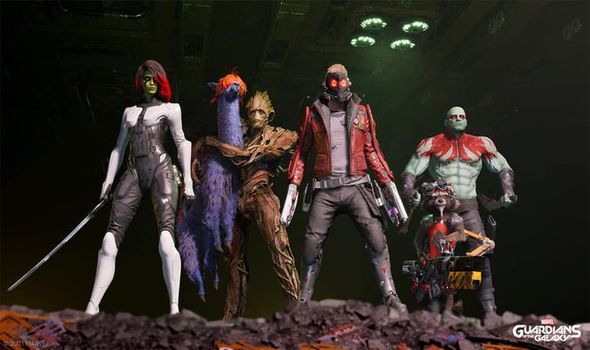 Guardians of the Galaxy will be the latest game set in the Marvel universe to try and join the great titles of the past.

While’s Marvel’s Avenges didn’t live up to expectations for many, Spider-Man remains one of the most cherished comic book crossovers ever created.

That’s without mentioning the likes of the Arkham series, various Lego titles and the Injustice brawler franchise.

And gamers are eager to jump into Guardians of the Galaxy to see how it stacks up against these other giants across PlayStation, Xbox, Nintendo and PC platforms.

From what has been shared so far, there will be no unified release time to follow across all platforms.

This means that it will be good to know precisely when the latest Marvel game will become playable in your region and platform of choice.

Eidos has confirmed that the Guardians of the Galaxy release date and launch time has been scheduled for Tuesday, October 26.

The schedule will run differently depending on if you’re using Xbox, PlayStation, Switch or PC, with the latest message from the team confirming:

So it sounds like PC gamers will be waiting the longest in some cases, although most regions appear to be rolling out at the same time.

Guardians of the Galaxy is an action RPG that focuses on the whole team led by Star-Lord in a single-player setting.

Kurt Russell reveals what made him join Guardians of the Galaxy

You’ll lead the Guardians into battle and have the choice of which team members to call on to help you overcome your foes.

Here’s a rundown on how Guardians of the Galaxy will play when it arrives on October 26:

What you need to remember is that these moves aren’t just cool things you use in a fight – they’re things you must use. While he’s no slouch in combat, Peter Quill can’t do it all alone – you simply won’t survive without the help of your team.

For example, you could call on Groot to entangle a mob of foes in his branches, causing them to freeze in place, and combo that with Rocket’s penchant for explosives to hit them all at once.

Alternatively, you take out a target’s shields with your ice shots, call on Drax to do massive damage to their stagger bar, and finish them off with powerful slash from Gamora.

It may tell an original story in an original setting, but Marvel’s Guardians of the Galaxy is an unashamed love letter to the cosmic side of the Marvel universe.

Eagle-eyed fans will notice many references and nods to people, places, and races from the comics. One of the key inspirations for the game’s story is Dan Abnett and Andy Lanning’s 2008 Guardians of the Galaxy run.

That thin line of diplomacy extends to the many other people you meet over the course of your adventure. You’ll make choices throughout the game, which can change both how events play out and how people treat you.

It’s up to you how you approach these interactions – do you always follow your own code, or try to tell people what you think they want to hear? However you play, there’s one constant – you can’t please everyone.