Guardians Of The Galaxy: The 15 Best Outfits In The Game

Square Enix's new Marvel game, Guardians of the Galaxy was an adventure filled to the brim with colorful personalities, each of them more unique and endearing than the last. The titular team of the Guardians are no different, and reflecting their personalities and histories, are their wardrobes.

The game has tons of fantastic attires to collect within the large worlds, allowing for each player's team to look as distinctive and creative as they'd like. Here are the 15 best outfits from all these ragtag heroes. 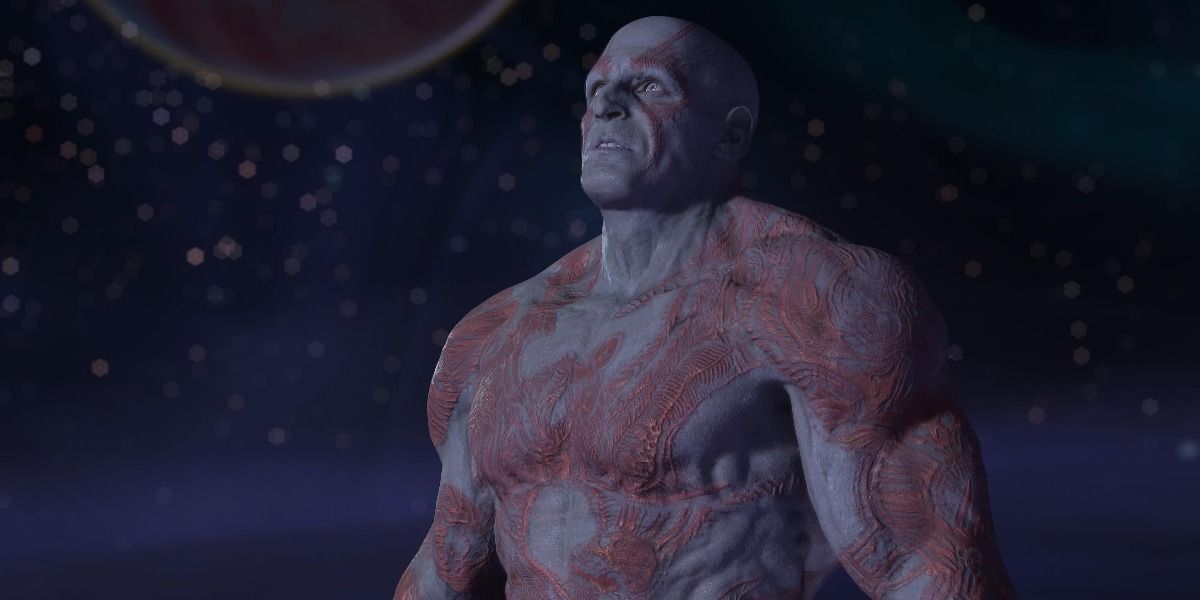 Drax's MCU suit truly showcases just how different his cinematic color scheme is compared to his comic and game counterpart. That doesn't mean that his MCU attire is bad — in fact, this suit just solidifies how cool his look is.

The elaborate tattoos and the tactical pants add a sense of intensity and realism, matched by his insanely muscular build. It's a fantastic look and a picture-perfect representation of Dave Batista's portrayal. 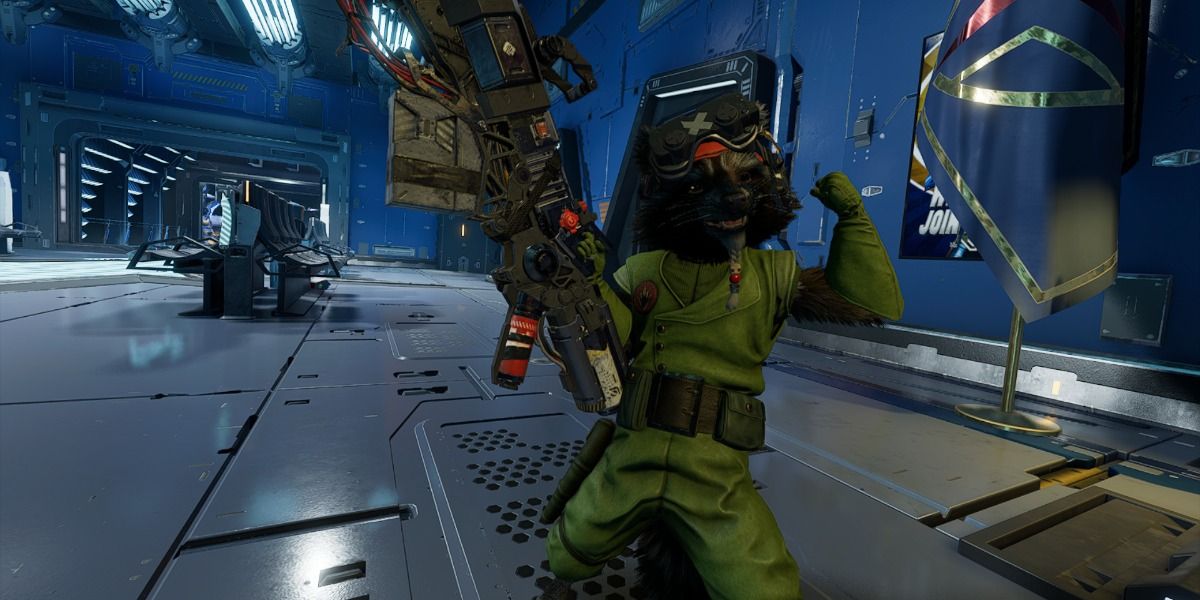 A representation of Rocket's traumatic creation, this attire is a great replica of his classic design. The suit is perfectly described by Rocket himself as a 'dashin' swashbuckler wearing bright green and a killer smirk'.

The large green gloves and padded, darkened belt all add to the space pirate design for this character. Alongside his 'tough guy' persona and dangly beard, it's a perfect complimentary look. 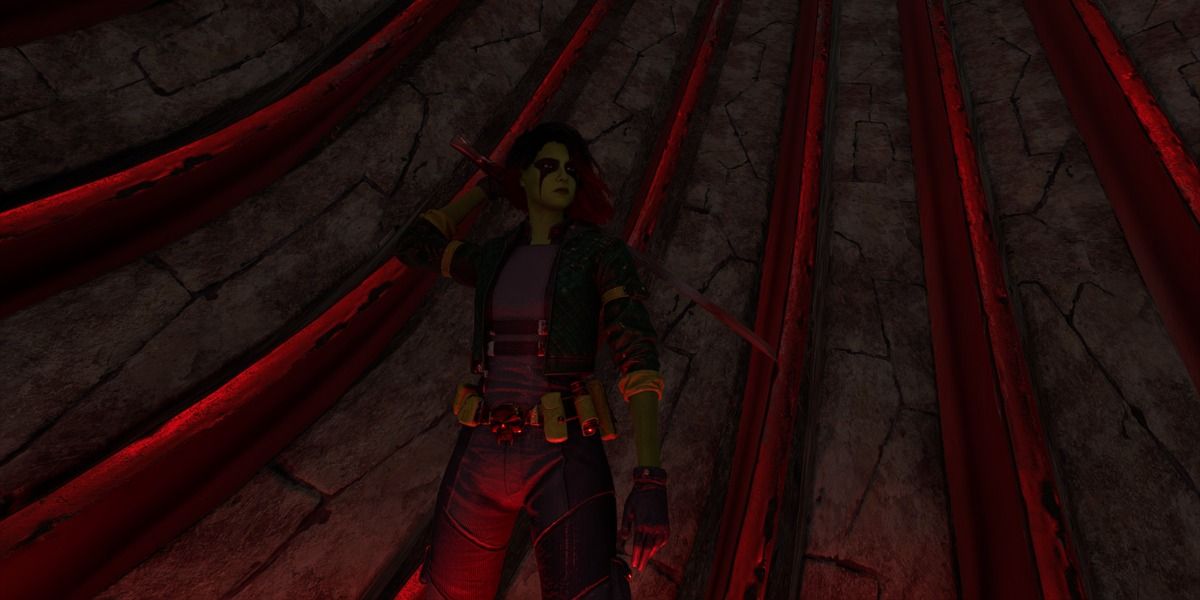 Sometimes, you don't want to wear an elaborate set of armor of majestic garbs when heading out for an assassination. That's where Gamora's Casual Kill attire makes an entry. Made to fit in with the scummy underground of Knowhere, this attire is a much more laid back and punk look for the Galaxy's Most Dangerous Woman.

The textures are sleek and detailed, and the leather jacket is a unique but welcome addition to Gamora's design. Must be Quill's sense of style rubbing off on her. 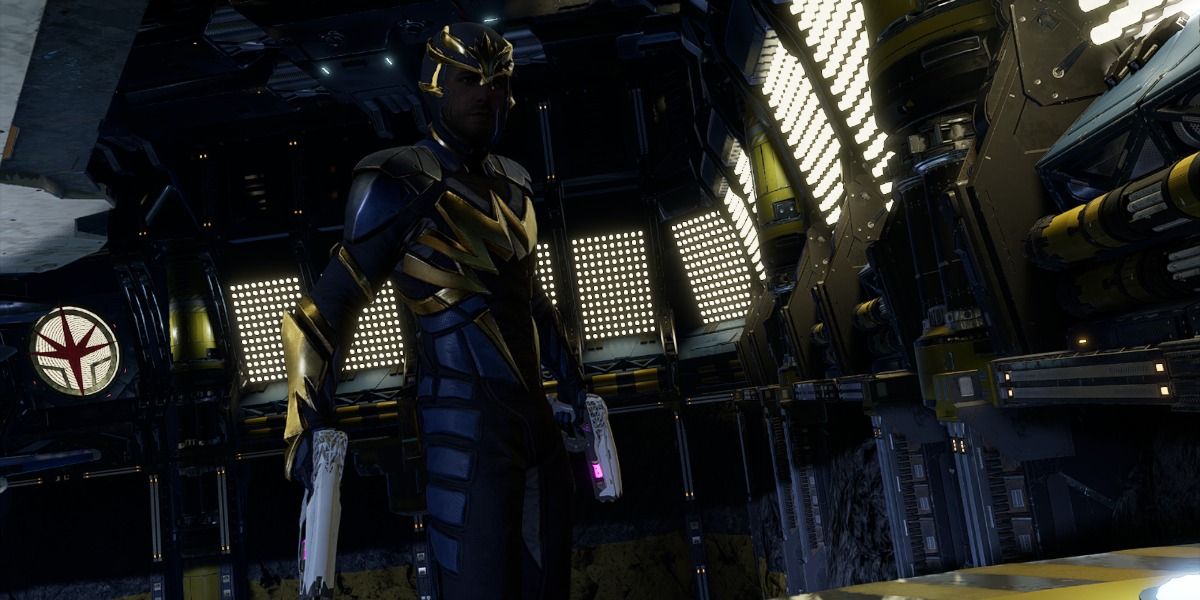 Inspired by Peter's 2013 look, Sleek-Lord is, by definition, a very sleek look. The royal blue colors stand out thanks to the armored plating, and the golden highlights manage to stand out beautifully.

The golden armor and the helmet pieces almost look like a crown, which is a fantastic reference to Quill's royal Spartaxian bloodline. The suit also has a unique helmet, feeling more like a cosmic biker helmet than Peter's usual designs. 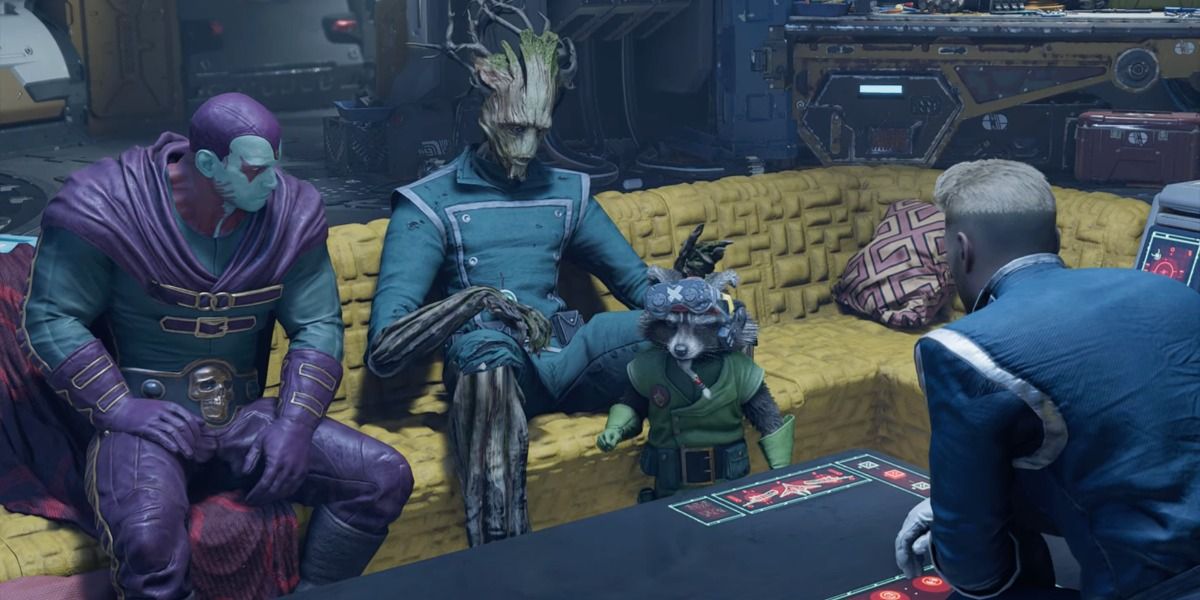 Poor Groot got the short end of the stick, as many of his suits don't exactly shine. Next to his allies and their unique wardrobes, much of Groot's looks are similar. Not so for this Annihilation Conquest suit, torn directly from the pages of the comic, Annihilation Conquest.

The attire looks just like the set of uniforms the early comic Guardians used to wear, giving Groot a well-decorated, almost regal look. Shame the other guardians didn't get matching outfits like Groot and Peter. 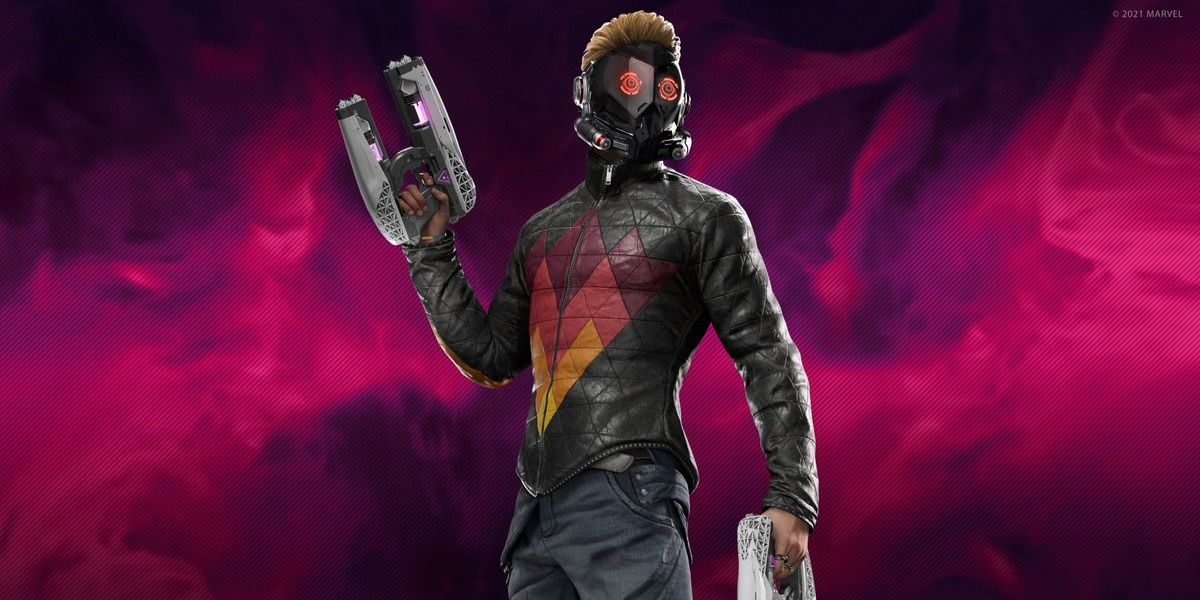 Fans of Star-Lord's current comic arc will be overjoyed to see this smooth, almost biker-style attire. The suit is probably one of Peter's more simplistic looks, but the design just manages to stand out in the best way.

Alongside some colors in the MCU-inspired helmet (this design inspired the comics near 2014), the jacket manages to stand out immediately, as the combination of warm colors catches the viewer's eye. The textures of the jacket manage to add to the suit, sleekly popping out in the galactic landscape. 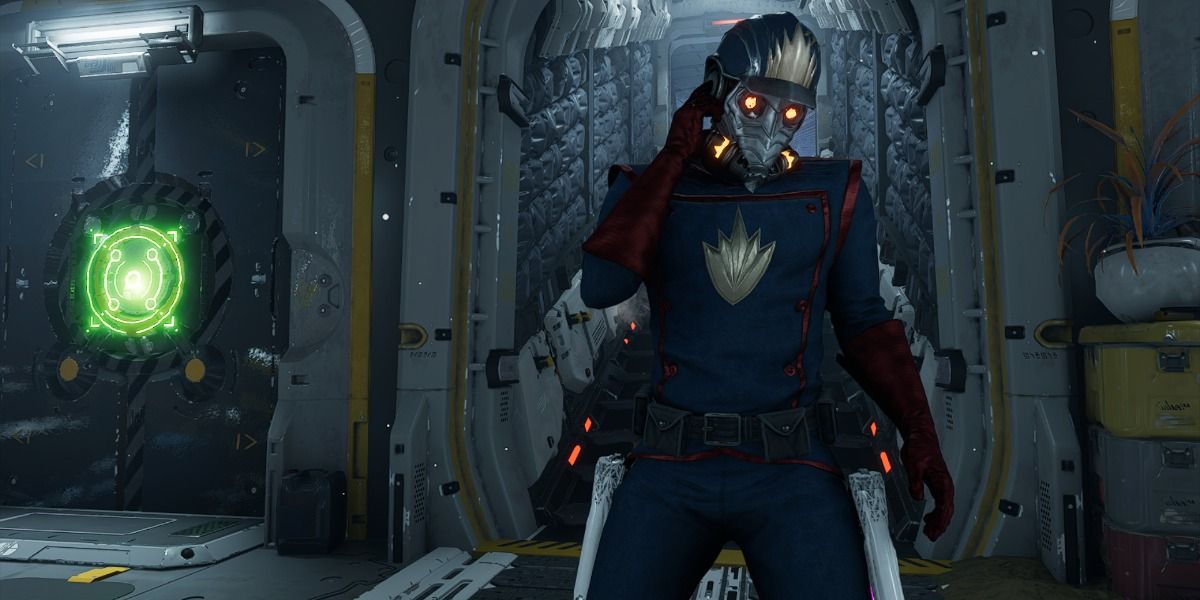 The result is a phenomenal and smooth attire that is both ornate and sharp. The uniform is probably the closest thing to a formal suit Peter Quill would ever wear, and there's a tactical quality to it thanks to the militaristic, armored helmet. 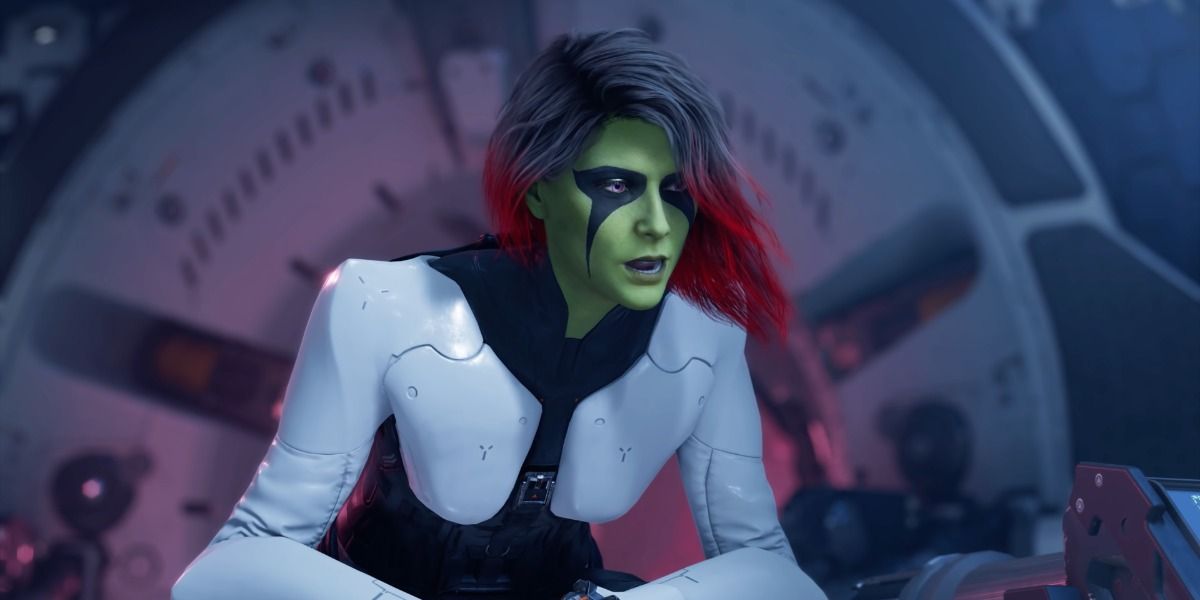 Heavily inspired by Gamora's comic book white armor, this look is a bit more padded, taking away the red highlights to create a sleek new look. The white armor is jagged and padded on top of the black tactical attire, adding a sense of practicality.

Additionally, the armor manages to match very well with Gamora's mask, available to see clearly in photo mode. It's definitely one of, if not the strongest, out of all the default attires. 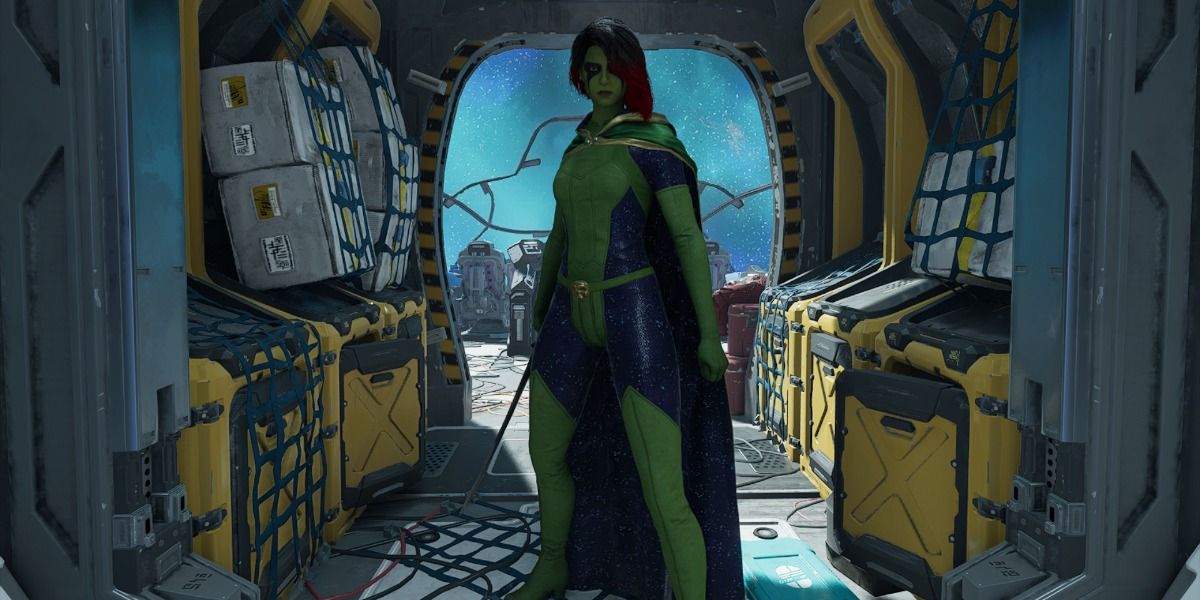 The Black Vortex is a cosmic mirror that manages to showcase the viewer what they would look like with their unleashed cosmic potential. In the case of Gamora, she found this look, a blend of her classic design and some new, galactic updates.

The starry blue sections of the attire look gorgeous, contrasting well with the green cape and leathery body armor. The gold skull is also a great touch and a nice reference to Gamora's classic look. 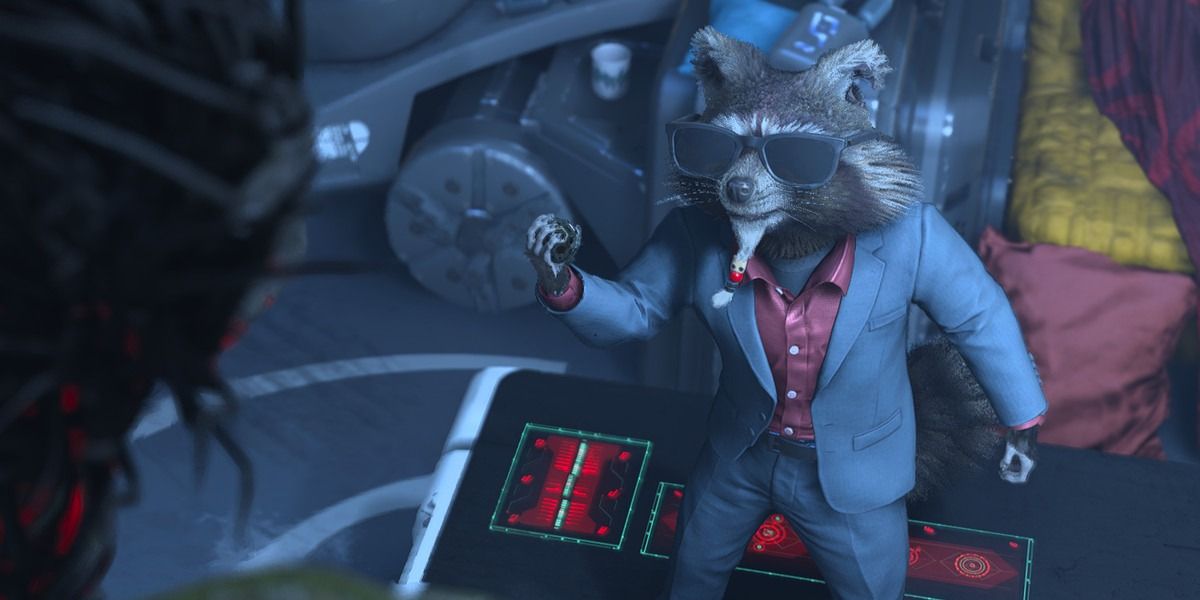 Professionals have standards, and when looking at this immaculate attire, you can tell Rocket is (trying to be) the most professional member of the bunch. Looking straight out of Scarface and Rocket's 2017 comic design, this suit pops out from within Rocket's rag-tag, armored wardrobe.

The sunglasses are a great touch, making Rocket feel like a true '80s action movie icon. The suit is also named after a very big gun, something Rocket is known to be an extreme fan of. 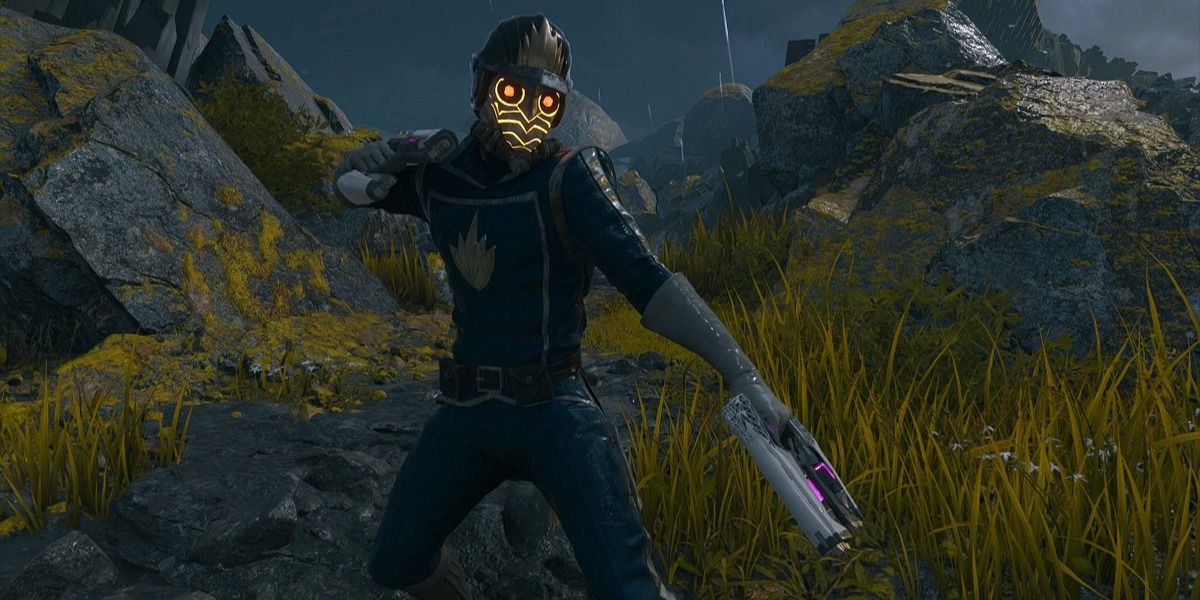 Accompanying Groot's Annihilation Conquest attire is Peter's War-Lord attire, which manages to get bonus points for matching Groot's color scheme. The blue and white collide gorgeously, and like the Team-Lord suit, the textures really help the attire stand out.

The white gloves and boots also help the Element Guns fit in well with the outfit, feeling like a complete set. The attire also has neon yellow highlights that lead to a much more shiny, glowing helmet, compared to the Team-Lord design. 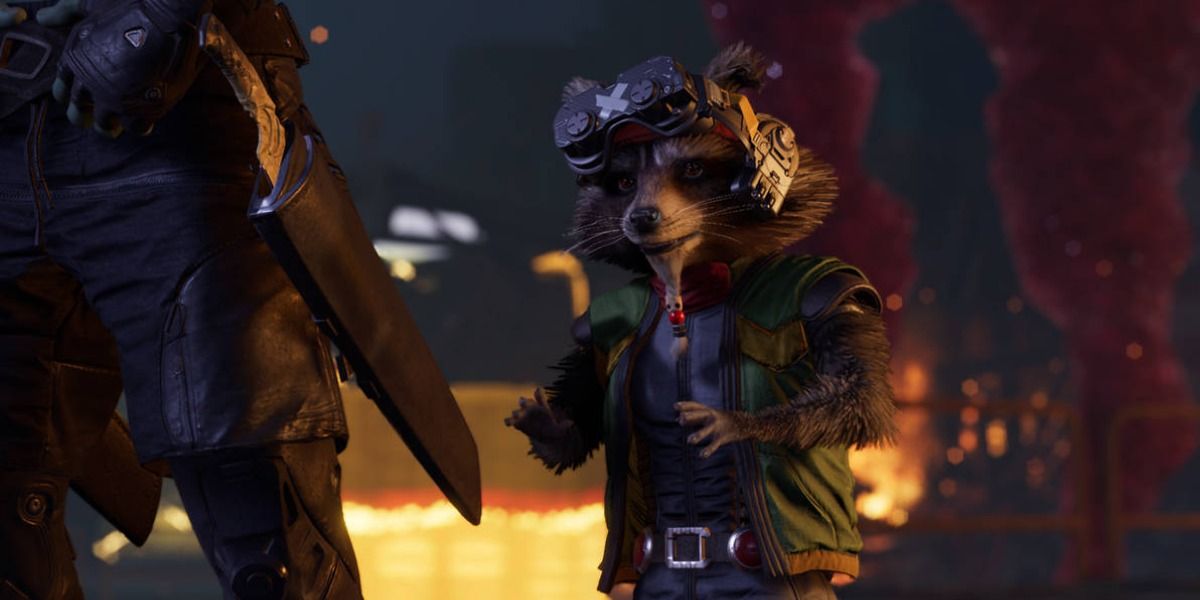 There's no outfit more fitting of Rocket's personality than the Smuggler suit. Charming and slick but with a rugged quality, the suit is just the perfect blend of casual streetwear and tactical necessities.

The red scarf is another unique detail, something that the MCU picks up for Rocket's look in Avengers: Endgame. The green and yellow vest has some phenomenal textures, and it is contrasted well with the metallic gray shoulder pads. 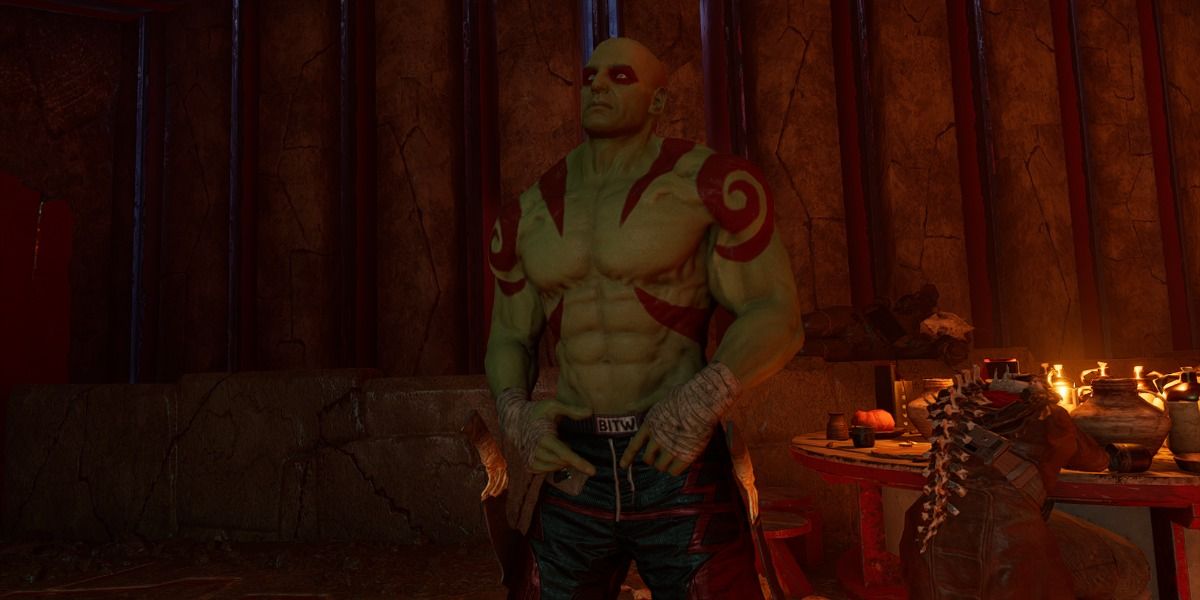 Drax's Cage Match attire is a dream come true for any comic book and wrestling fan. Based on CM Punk's miniseries, his actual in-ring attire, and the fantastic variant cover by Ed McGuinness, this design is ripped straight from the comics.

Featuring all the nods to Punk, the outfit includes the wrist tape, combat shorts, and Punk's 'B.I.T.W.' insignia. The outfit also has a more comic-accurate skin tone and depiction of Drax's red tattoos. 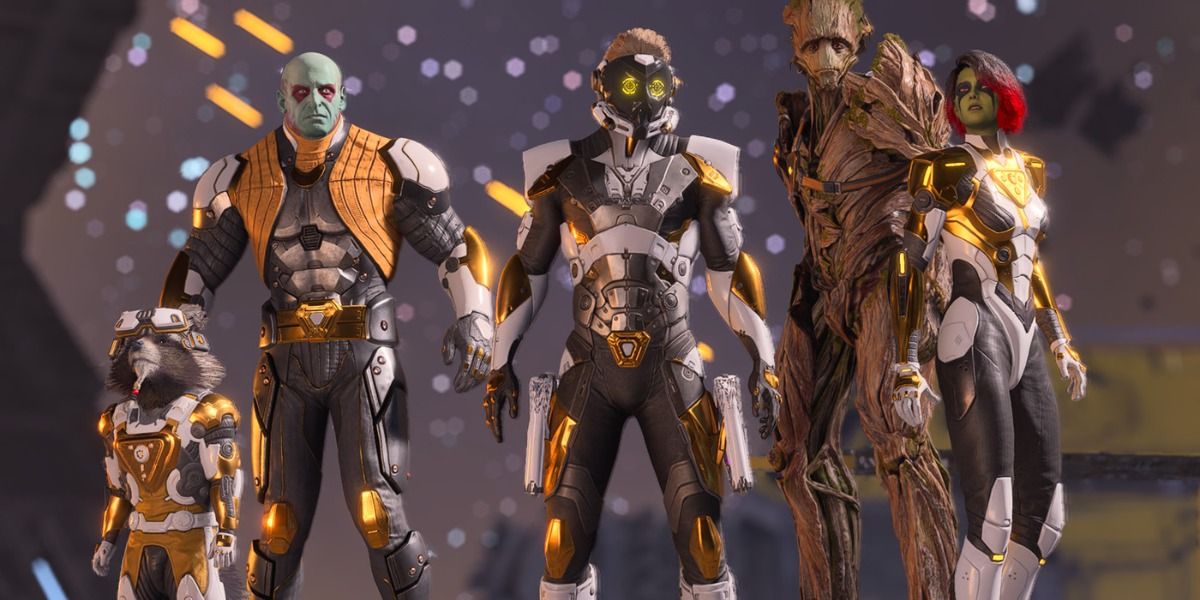 The Golden Guardians attires aren't just a great upgrade for the final battle, it's a little reward from Square Enix to the player; a gift for getting near the end of the game. The result has two of the best attires within the entire adventure.

Both Peter and Gamora's looks are phenomenal, with the pearly white and metallic gold armor shining on top of the black protective padding. Plus, both looks are extremely pristine and definitely the best of the group's looks. 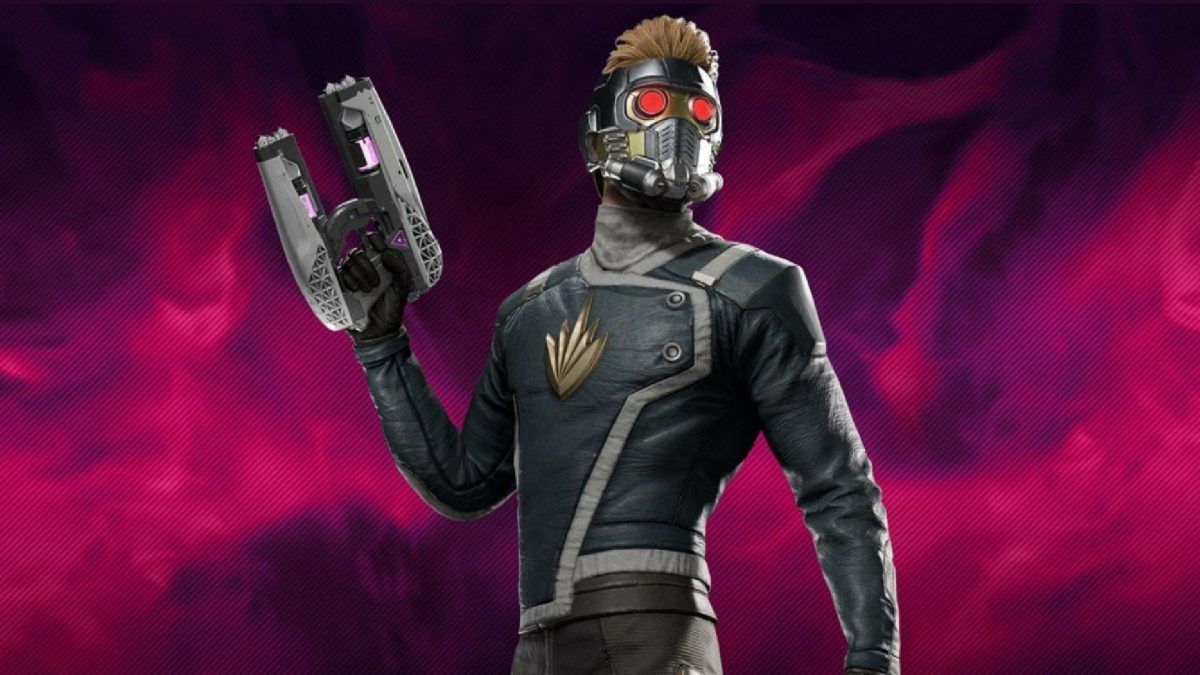 The perfect blend of classic and modern looks, Social-Lord manages to merge the MCU helmet, the classic uniform-styled design, and the leather jacket-styled texture of the upper body. The result is definitely Star-Lord's best look.

Debuting in 2017's All-New Guardians of the Galaxy, the suit is a fantastic updated version of the comic design. Thanks to the game's phenomenal textures and graphics, it feels like the comic has come to life with this attire.