Hands-On: Nerf Ultimate Championship Takes Us Back To Basics 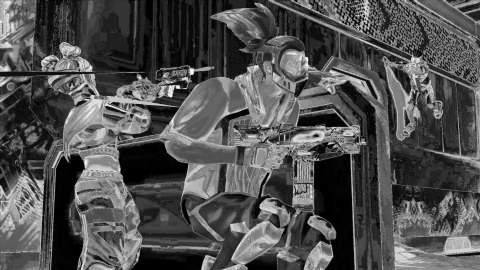 Nerf Ultimate Championship feels like a competent team-based VR shooter and though the parkour-style action proves entertaining, it’s rather light at launch. Read on for our full hands-on impressions!

For a Hasbro brand of toy weapons, there’s a surprising number of Nerf video games, but Nerf Ultimate Championship might be the best yet. Launching today as a Meta Quest 2 exclusive, Secret Location’s 4v4 VR shooter has been slowly teased since its initial reveal back in June 2021, including a beta test and new gameplay trailer earlier this year. Joined by several influencers and members of the Secret Location team , I went hands-on for a two hour preview last week. Though I enjoyed my time with the game, I was also left wishing there was more to do.

While we’ve recently seen similar VR multiplayer FPS games like hero shooter Larcenauts, Nerf Ultimate Championship takes a different approach. You can pick between four pre-set avatars but unlike Larcenauts, you won’t find any unique abilities or weapons between them. Everyone’s essentially playing the same character with a different appearance, customizable with cosmetics earned through a free battle pass system. However, as far as differences go, that’s pretty much your lot.

Avatars can be changed in the social hub, a lobby that’s our home between matches, which also holds three different practice zones. From pistols to long-range blasters, there’s 10 different weapons at launch, and Blaster Zone provides a shooting range for practice. Looking to master wallrunning and climbing? Parkour Zone’s obstacle course could be the one, while the Combat Zone combines elements of both with a mini map.

Once everyone arrived, we tested all three of Nerf Ultimate Championship’s modes. Kicking off with King Of The Hill, this mode doesn’t deviate from other shooters – two teams battle to control a central capture zone. Multi Point Capture takes a similar approach, splitting this between three smaller control points instead. Finally, anyone after a more traditional deathmatch will find it in Team Battle – the first team to 35 points wins. All fun options (and their respective maps suited them well) but with two of its three gameplay modes being functionally similar, I wish there was more variety.

When it comes to the actual moment-to-moment gameplay, Nerf mostly nails the fundamentals. Starting the match in a safe zone, each team can grab several weapons after spawning – there’s no preset loadouts here. Nerf guns require priming after every shot, which can interrupt the flow of action, but thankfully automatic priming is also an option. Once things kick off, you can shoot, sprint, double jump, crouch, wall run and reach over your shoulder to grab ammo. You’re protected by a shield meter, but it’ll deplete after a few hits – if you don’t find cover after that, the next hit is a guaranteed kill.

Handling weapons using the motion controls feels straightforward and killing opponents while wallrunning was honestly thrilling. My biggest problem is that beyond the basics, the gameplay doesn’t have tremendous depth. There’s no extra abilities beyond choosing a different gun. I don’t think shallow is the right word – you can see Secret Location took its time polishing the core elements – but I wanted more. It feels slightly bare and after an hour, I felt like I’d seen it all.

Still, that doesn’t stop this shooter feeling approachable and Secret Location’s confirmed we’re getting more modes, guns and maps post-launch. Nerf Ultimate Championship’s simplicity will lend itself well to casual gaming and newcomers. By giving everyone the same character, there’s no agonizing over weapon loadouts or gameplay metas like in other competitive shooters. Nerf is taking us back to basics and in its own way, that’s rather refreshing.