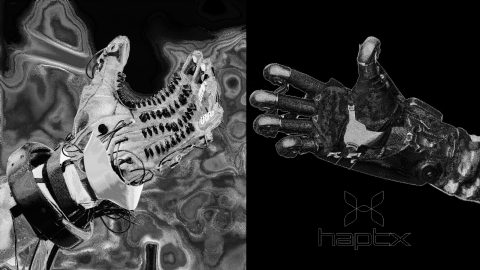 Most VR gloves simply attach tiny vibration motors to your fingers, but HaptX revealed a force feedback microfluidic prototype back in 2017. In late 2018 it announced its first product Gloves DK1, which has been used by militaries, medical schools, and corporations like Nissan for advanced training & simulation. In January it revealed Gloves DK2 which are smaller, lighter, and more comfortable with enhanced haptic fidelity. While the price is kept secret, we’ve heard it’s north of $10,000.

Meta’s blog post claimed its AR/VR interaction and input research team was formed seven years ago, with serious work on a haptic glove starting at least four years ago. It did not mention HaptX.

“Over the last decade, HaptX has pioneered the field of microfluidic haptic feedback. Our award-winning technology has been widely covered in the popular and technology press, and we’ve worked tirelessly to develop and promote the unique benefits of microfluidics as an approach to high-fidelity haptic feedback. With the longstanding dedication of our engineers, developers, and investors, we have also secured an industry-leading patent portfolio to protect our technology and products.

In interacting with other companies in the VR industry, we have always believed that cooperation is paramount to the development of the industry as a whole. Over the years, we’ve hosted many engineers, researchers, and executives from Meta to demonstrate our groundbreaking haptic technology.

Today, Meta announced their own prototype microfluidic haptic feedback glove. The core components of this prototype, including the silicone-based microfluidic tactile feedback laminate and pneumatic control architecture, appear to be substantively identical to HaptX’s patented technology. We welcome interest and competition in the field of microfluidic haptics; however, competition must be fair for the industry to thrive.

While we have not yet heard from Meta, we look forward to working with them to reach a fair and equitable arrangement that addresses our concerns and enables them to incorporate our innovative technology into their future consumer products.“

Notably, Rubin claims Meta engineers, researchers, and executives visited HaptX over the years to view its patented technologies and suggests Meta is passing off the microfluidic laminate and pneumatic control technology as its own idea despite being “substantively identical”. Rubin seems to be implying Meta will need to license these patents if it ever plans to ship a product using these technologies.

If Meta does plan a gloves product without reaching an arrangement, it would be up to the legal system to decide whether it infringes HaptX patents. But if Rubin’s claims are true, at the very least Meta’s blog post may have misrepresented the originality of its work.