Hear from CIOs, CTOs, and other C-level and senior execs on data and AI strategies at the Future of Work Summit this January 12, 2022. Learn more

To say that the global pandemic has transformed the workforce would be something of an understatement, with remote work still a reality for millions of people globally. To help with the rapid transition from centralized working environments to a more distributed network of home-working hubs, cloud-based software-as-a-service (SaaS) tools such as Zoom have shown their worth. But at what cost?

In a world where major businesses, from Salesforce and Microsoft to VMware and Dropbox, have confirmed a permanent shift to a remote-first or hybrid working policy, people are spending less time face-to-face and more time face-to-screen. As such, better and more adaptive virtual collaboration tools will prove to be vital — Zoom fatigue, after all, is very real.

That is precisely what Headroom is setting out to solve, with an AI-powered platform that automates many of the laborious tasks involved in virtual video meetings, and removes some of the stress entailed in catching up with key discussion points.

Headroom was formed in 2020 by a triumvirate of founders with experience in building products at companies such as Google and Magic Leap. CEO Julian Green previously founded an AI-powered photo startup called Jetpac, which Google acquired in 2014. He then went on to become a group product manager at Google, where he launched the Google Cloud Vision API and Android Vision on-device API, as well as overseeing various augmented reality visual search products. More recently, Green served as a director at Alphabet’s “moonshot factory” X.

Headroom raised $5 million in seed funding last October, with big-name backers, including Google’s AI-focused fund Gradient Ventures and Yahoo cofounder Jerry Yang. As of this week, Headroom is officially available for anyone to sign up for after an extended beta period.

While Headroom is a video communication platform in a similar vein to Zoom, it packs a number of notable tools on top of its core video chat functionality — it has been built with productivity, inclusiveness, and organization at its core.

Headroom automatically transcribes a meeting, enabling users to search the transcript for keywords that are relevant to them — rather than having to sit through an entire two hour replay to get to the stuff that matter’s for their role. 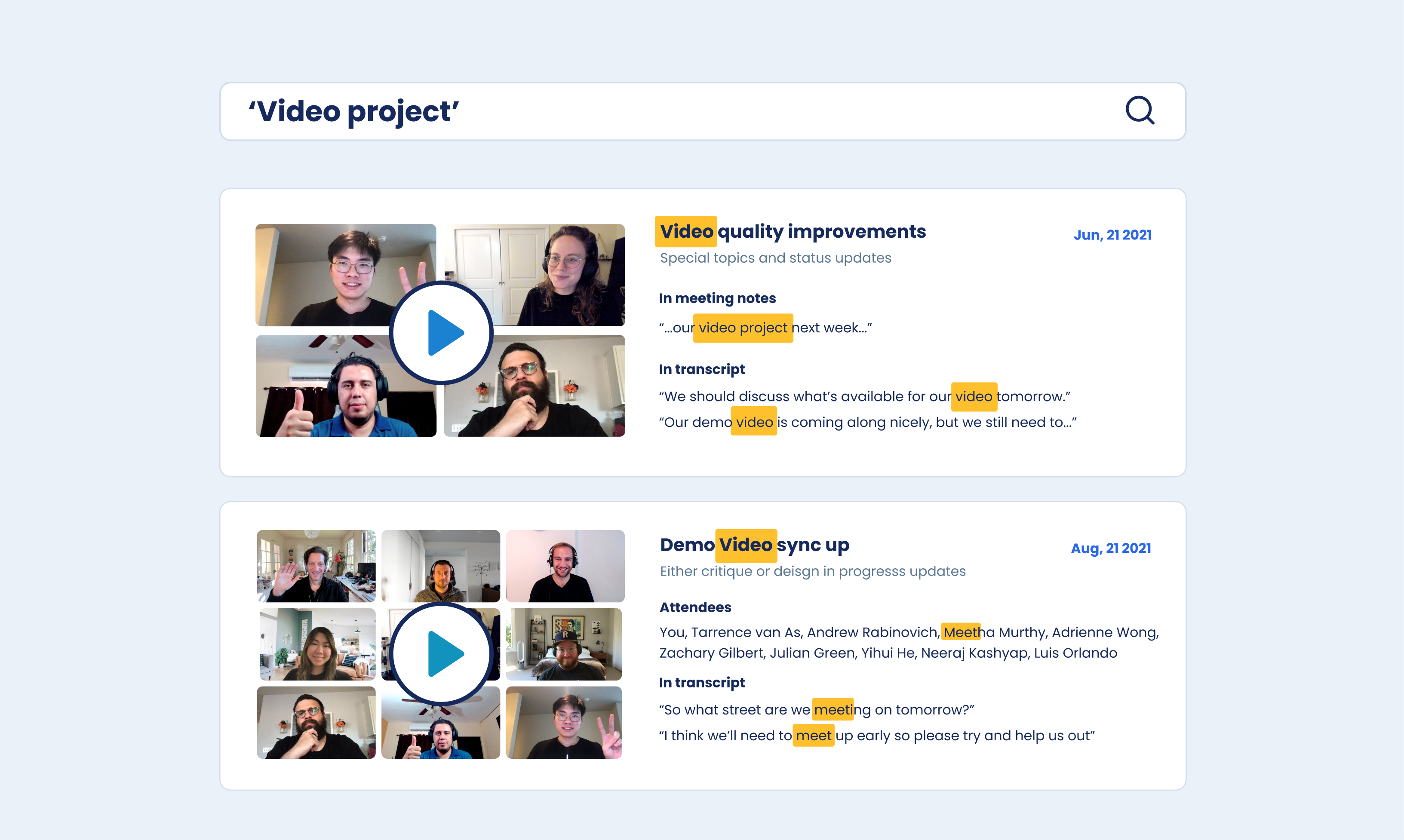 With this transcription in place, Headroom can also conduct a textual analysis using natural language processing (NLP), and by leveraging computer vision to analyze body language — including gaze-tracking and facial expressions — to generate highlights based on the perceived energy levels of the participants.

“Together, these signals allow us to automatically produce a highlight version of the meeting that is ten times shorter — you can skip between highlights and get a good sense of an hour-long meeting in minutes,” Green told VentureBeat.

Moreover, built-in gesture recognition allows meeting participants to quickly show their (dis)approval without unmuting their microphone, either by giving a thumbs up/down, or raising their hand to indicate that they have a question without verbally interrupting the current speaker. 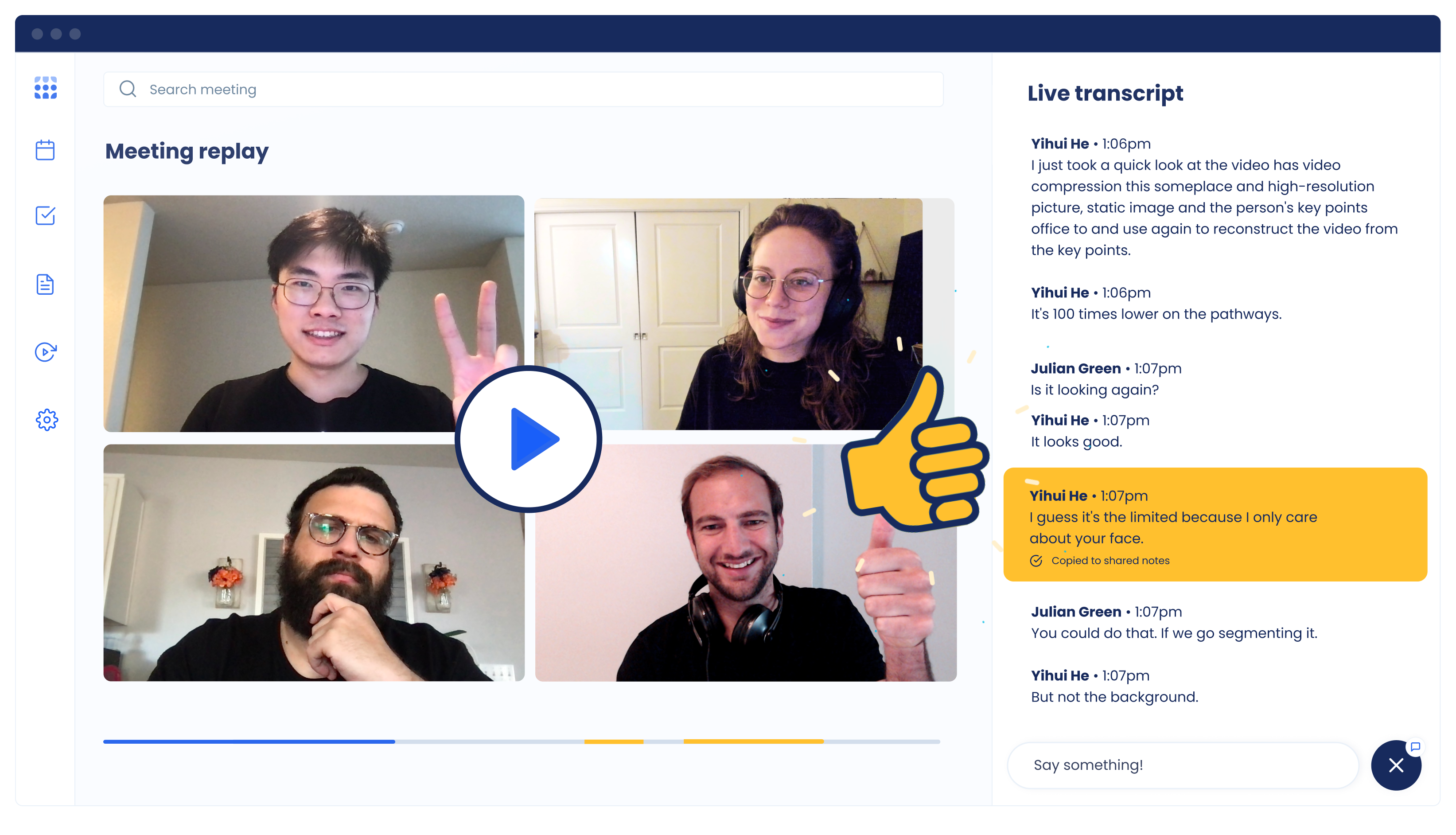 Above: Headroom: Replaying a meeting, with context

On a technical level, Headroom uses what is known as “real-time super-resolution,” which essentially transforms low-definition video into high-definition using lower bandwidth. And with its server-based architecture, Headroom doesn’t consume users’ local computing power — everything takes place in the cloud.

“We can provide all these AI features without taking up all your CPU cycles, and having your computer fan running when you have a meeting,” Green explained. “Our differentiation from the many other efforts in this area stem from having developed a next-generation video-conferencing platform that enables low latency real-time AI to be run on real-time communication — older architectures can’t do this. Incumbents are in the pixel delivery business, we are in the intelligence delivery business.”

Meetings of the future

In the future, Headroom sees itself serving as a sort of centralized knowledge base that allows users to ask questions — such as “what was project XYZ’s outcome?” — and receive answers. This means those that couldn’t attend a meeting can easily discover any agreements or conclusions that were reached.

“Meetings will become a more flexible way to drive a business forward, from rich in-person communication all the way to rapid information-retrieval and value-added analytics,” Green said.

Other notable features include “wordshare,” which purportedly promotes “inclusivity” in situations where one or two people are doing most of the talking. Headroom counts the number of words each person has said, and displays a corresponding graph — in reality, though, this could shine a spotlight on less-vocal introverted participants instead.

While it remains early days for Headroom, the San Francisco-headquartered company is initially focusing on startups “since they tend to be early adopters and are less committed to existing tools,” according to Green. But he said that the company is seeing some early traction in the enterprise space.

“We have had inbound interest from consultancies, banks, healthcare, and educational companies,” Green said. “So there is value there for enterprises, which are very interested in the things we do well — coaching, improving inclusion, and transparency in meetings. Having a searchable store of meeting information, reducing duplicated meetings, and improving efficiency is attractive to companies of all sizes.”