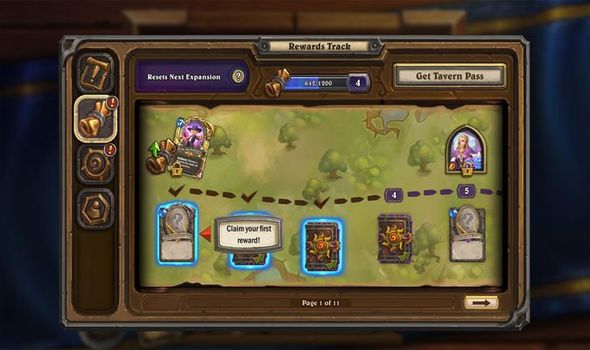 The Madness at Darkmoon Faire has begun, and Blizzard has announced a number of big changes to how rewards will work. Hearthstone players have been discussing the recent changes made to the rewards systems, pointing out how there would be less gold available than in past expansions. However, today has seen Blizzard reveal plans to tweak key aspects of its rewards system, based on player feedback. This includes the new Tavern Pass offering more gold by swapping out some of the later card packs. Gamers will be getting a total of 1350 gold that players can spend as they see fit, instead of six card packs.

These changes have been announced following a large backlash from fans over what was seen as devastating changes being made to the game for free-to-play gamers.

A full description of how things will be changing in the Hearthstone Darkmoon Faire expansion was shared today by game director Ben Lee, who told fans:

“We have been listening to your feedback regarding the Rewards Track and it’s clear we missed the mark both in how we communicated and implemented the full functionality of this first version of our rewards system.

“We apologize for the confusion and disappointment we have caused.

“During the natural progression of the rewards cycle, our intention was, and still is, to give out extra XP over time through a variety of ways.

“The aim is to help players get through the Rewards Track, or catch-up if they join later in an expansion phase, ultimately ensuring players earn more rewards.

“We also didn’t provide any details for how events will link into and support the rewards system.

“We will be providing bonus XP for various activities at each seasonal event every expansion cycle, and any additional bonus events as needed, again with the aim of ensuring that our players obtain more rewards.

“Our failure to communicate these factors has led to incomplete projections, for which we apologize.

“In addition, you’ve provided us with a wealth of feedback, and we agree that the pack rewards at the end of the track don’t feel appropriate for the effort it takes to get them.

“We’re going to adjust these rewards in the later stages of the track, swapping six packs for a total of 1350 gold that players can spend as they see fit. If any players reach this milestone before we implement these changes, they will be retroactively compensated.

“Our goal for the Rewards Track continues to be that all Hearthstone players earn more gold and total rewards per expansion. We’ll continue to evaluate the impact of these changes, listen to your feedback, and iterate as needed until we get it right.

“We will stay true to our word and ensure that the system lives up to what we all believe Hearthstone deserves.”

As mentioned above, this could be the first of a number of changes being made to Hearthstone and its rewards system.

There’s still plenty of feedback coming in from fans regarding how other tweaks need to be made to how XP is gained and how Season events will work.