Hearthstone: Every Druid Card From March Of The Lich King, Ranked

Over 140 cards make up the March of the Lich King expansion for Hearthstone, including ten Druid cards that offer a range of effects and abilities to help you in battle. When choosing what goes into your deck, you’ll want to consider things like cost, stats, keywords, availability, and if they have negatives – do they outweigh the positives?

Some of the Druids will even provide protection from your opponent, allowing you to feel more at ease playing more intuitively if you find yourself having to abandon the game plan. Obviously, sometimes the cards that end up in your hand together change the way you play things, but in a perfect hand in a perfect game, there are clear advantages to these Druids. 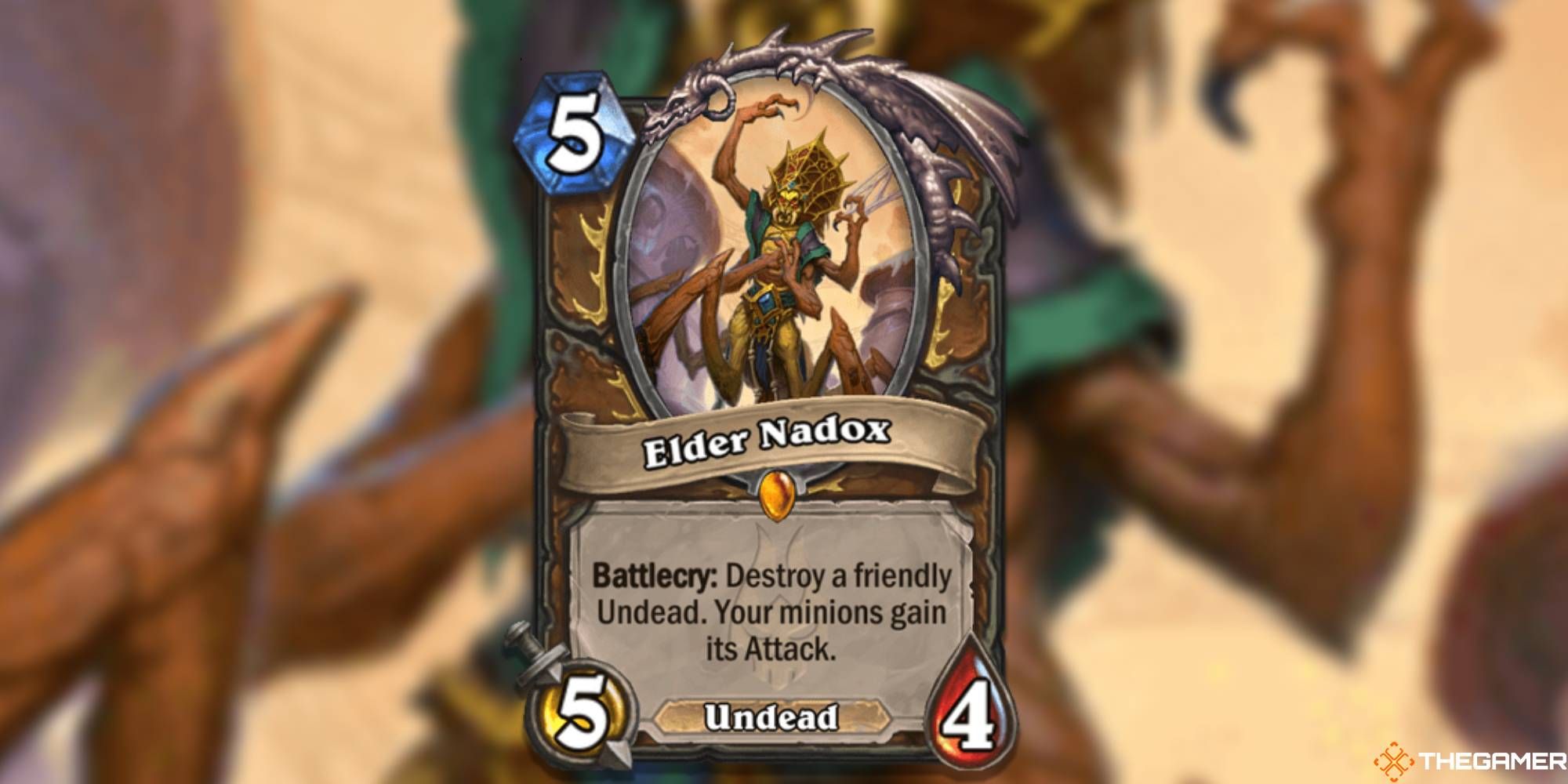 Elder Nadox is a legendary Minion with strong 5/4 stats. When you play it, the Battlecry will kill one of your Undead cards and transfer the Attack stat to your Minions. Playing Elder Nadox can be tricky; since it costs five mana you’ll be in the middle of the game before it’s even usable, and you may not want to sacrifice an Undead.

If you do, you will gain the Attack stats across all of your active Minions, which is a nice trade, but that can again depend on what Minions you have available. Ultimately, there’s a lot left to chance with Elder Nadox, so make sure you’re ready to play it if you add it to your deck. 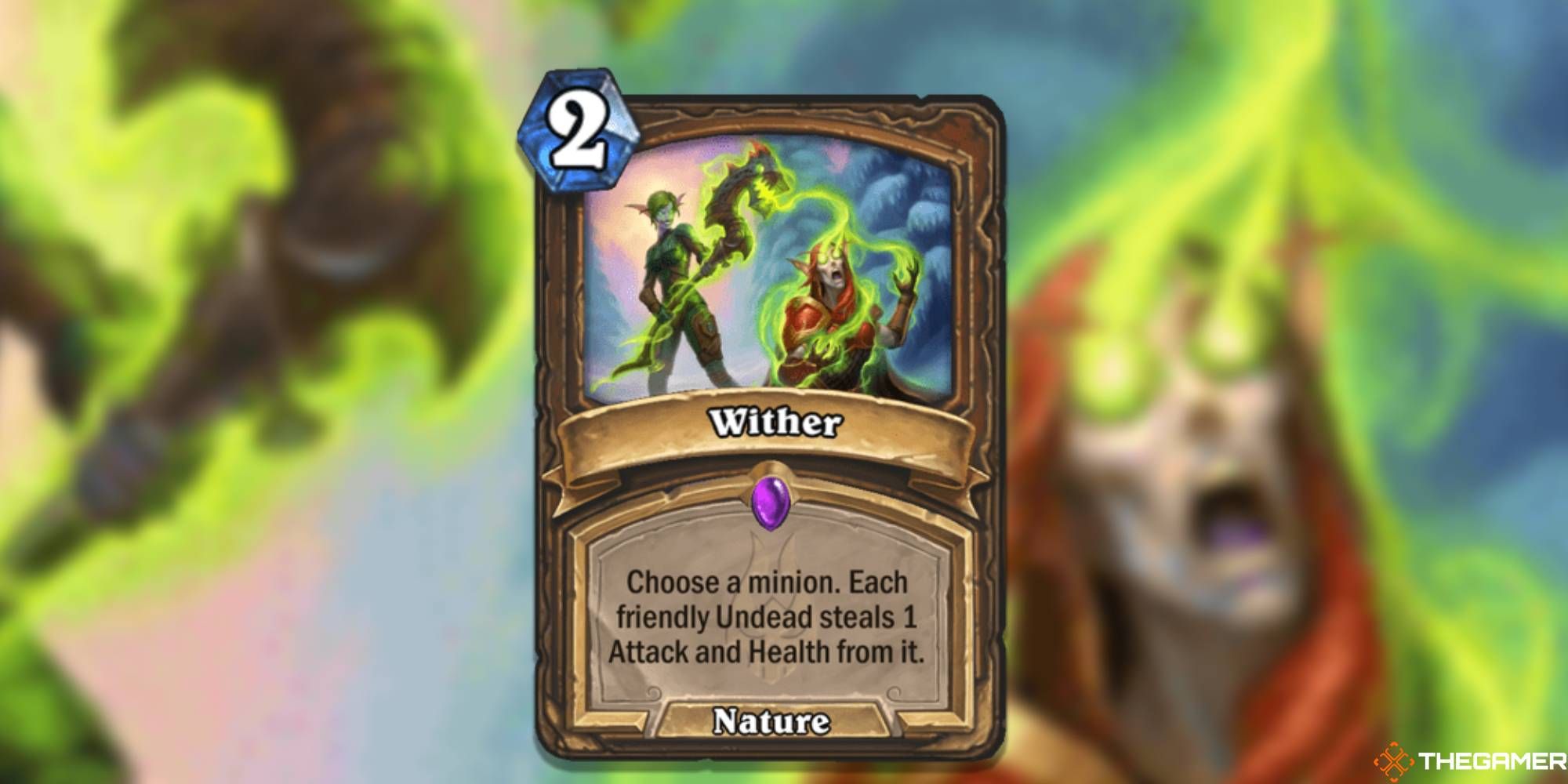 Wither is an epic Spell that’s cheap to play and will let your Undead cards take one Attack and one Health from a Minion of your choosing. Like Elder Nadox, Wither leaves a lot to chance, but at least you’re gaining Health with Attack to balance the Undeads’ stats.

Since it costs two mana to play, you’ll be able to use this Spell at any point in the game, which will give you time to send out more Undead to make it more worthwhile to cast. 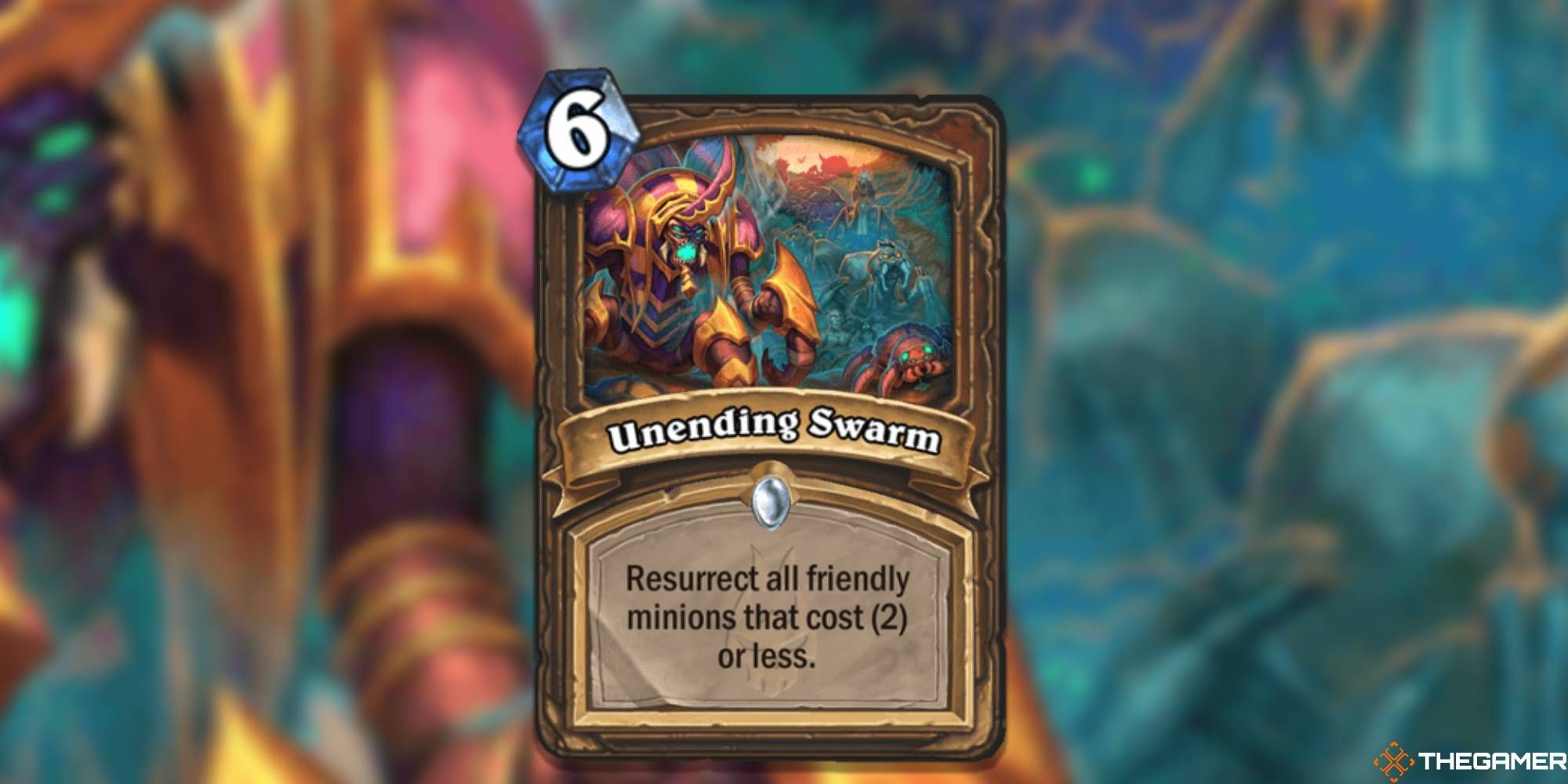 A common Spell, Unending Swarm will resurrect all of your fallen Minions that cost two mana or less. Casting this Spell will set you back six mana, but that’s not an issue since the later in the game you cast it, the better off you are.

Having this Spell in your deck is a great call because every deck is going to have Minions. However, since it only brings back your weaker Minions, this isn’t a card you’ll want to rely on to win the entire game. This is to play when you need to even the score with your opponent or have an ace-in-the-hole waiting to play. 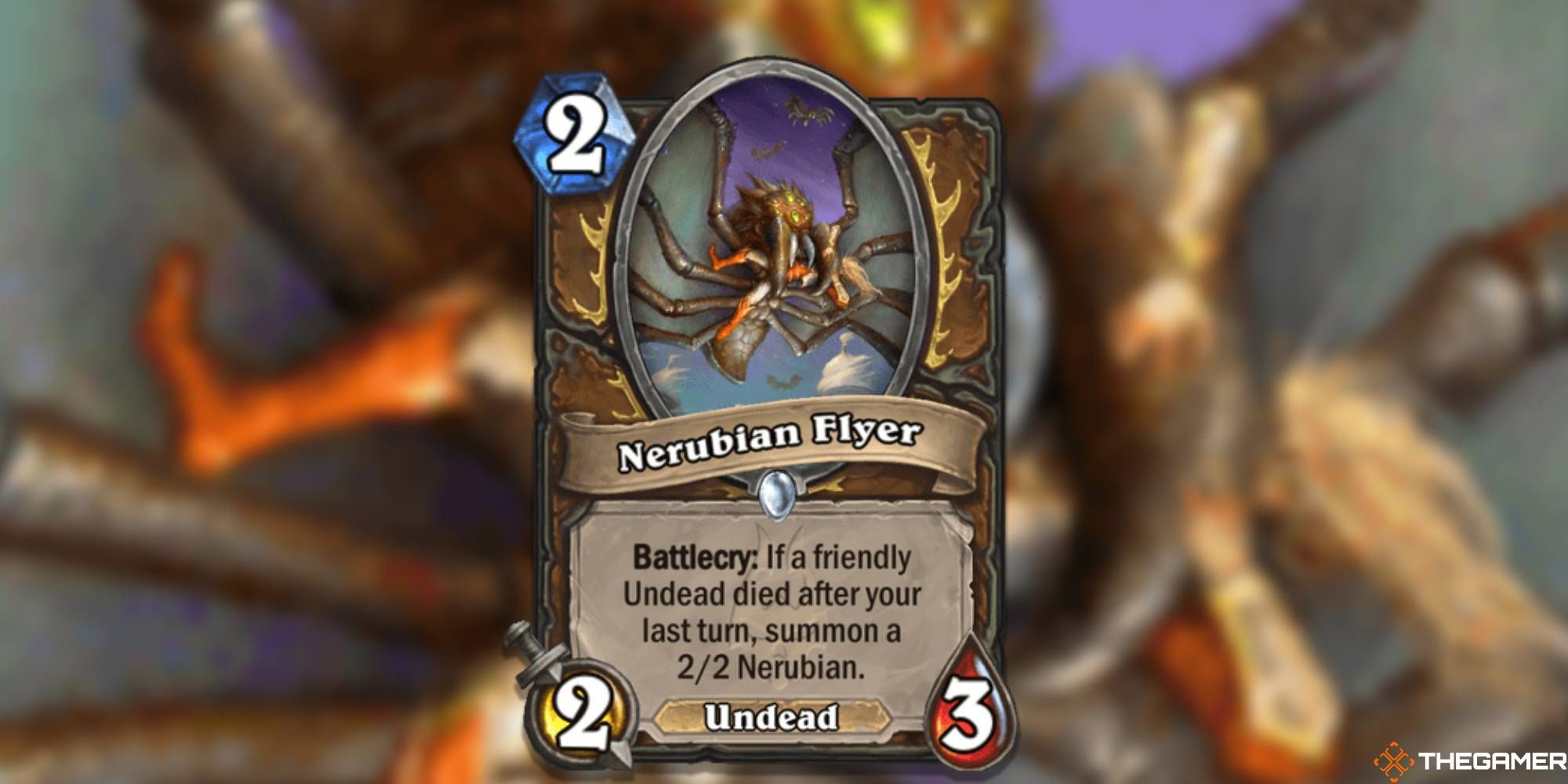 Nerubian Flyer is a common Minion with decent stats and a low price. Using the Battlecry, this card will summon a Nerubian with two Attack and two Health if you had an Undead die after your previous turn ended.

Obviously, the key to playing the Nerubian Flyer is timing it after a fallen Undead, but the payoff is two cards for two mana. You’ll be able to play this Minion at nearly any point in the game, making it even more valuable if you have a few Undeads in your deck. 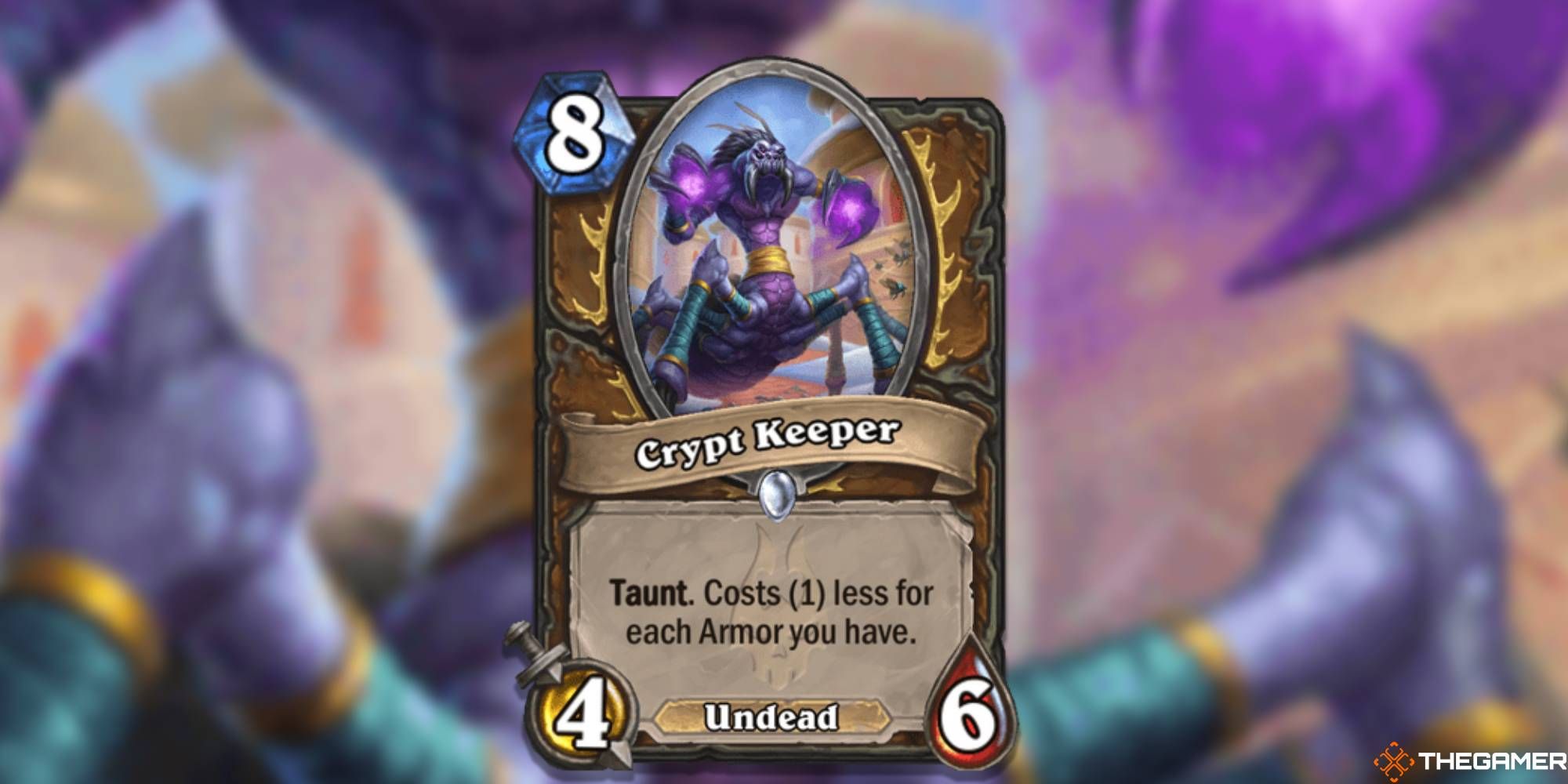 Another common Minion, Crypt Keeper sets you back eight mana, so you’ll be forced to wait toward the end of the game to use this card. It does have 4/6 stats, though, and uses Taunt against your opponent, so it can be handy if you have another powerful card you’re wanting to play late with it.

There is the possibility of using Crypt Keeper sooner if you have Armor. The mana cost is reduced by one for each Armor you have active, so if you like building decks with a lot of Armor abilities, this is a good Minion to include. 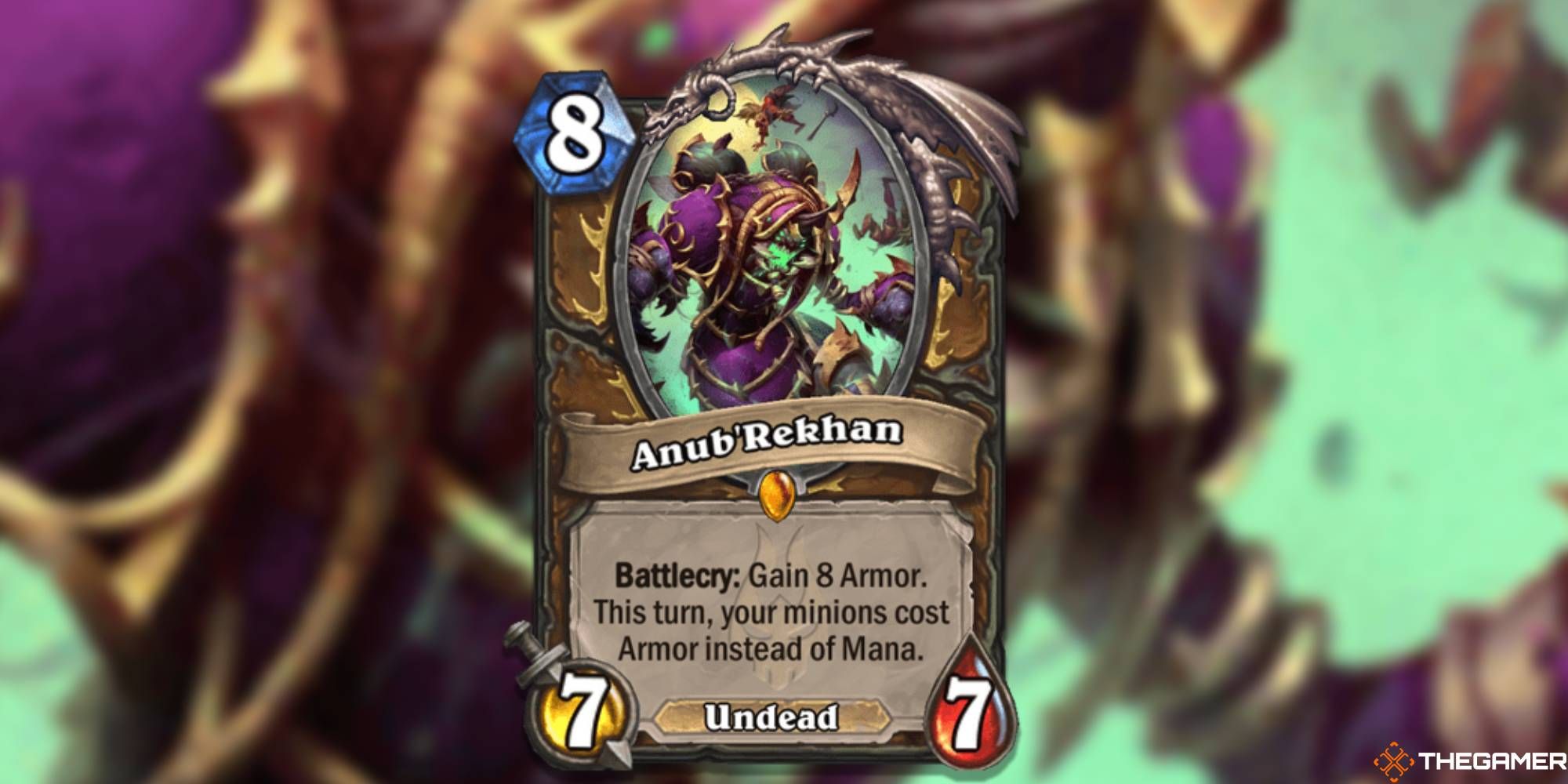 Anub’Rekhan is a legendary Minion with 7/7 stats and a high mana price. The Battlecry triggered when you play this Minion will give you eight Armor, but for the remainder of the turn, your other Minions will cost Armor to play instead of mana.

This can be beneficial for two reasons. One, if you want to play multiple cards, you can spend eight mana on Anub’Rekhan, then use the Armor this card provides to play Minions. Two, if you have this card, it’ll be cheaper to play Crypt Keeper if that’s in your hand. 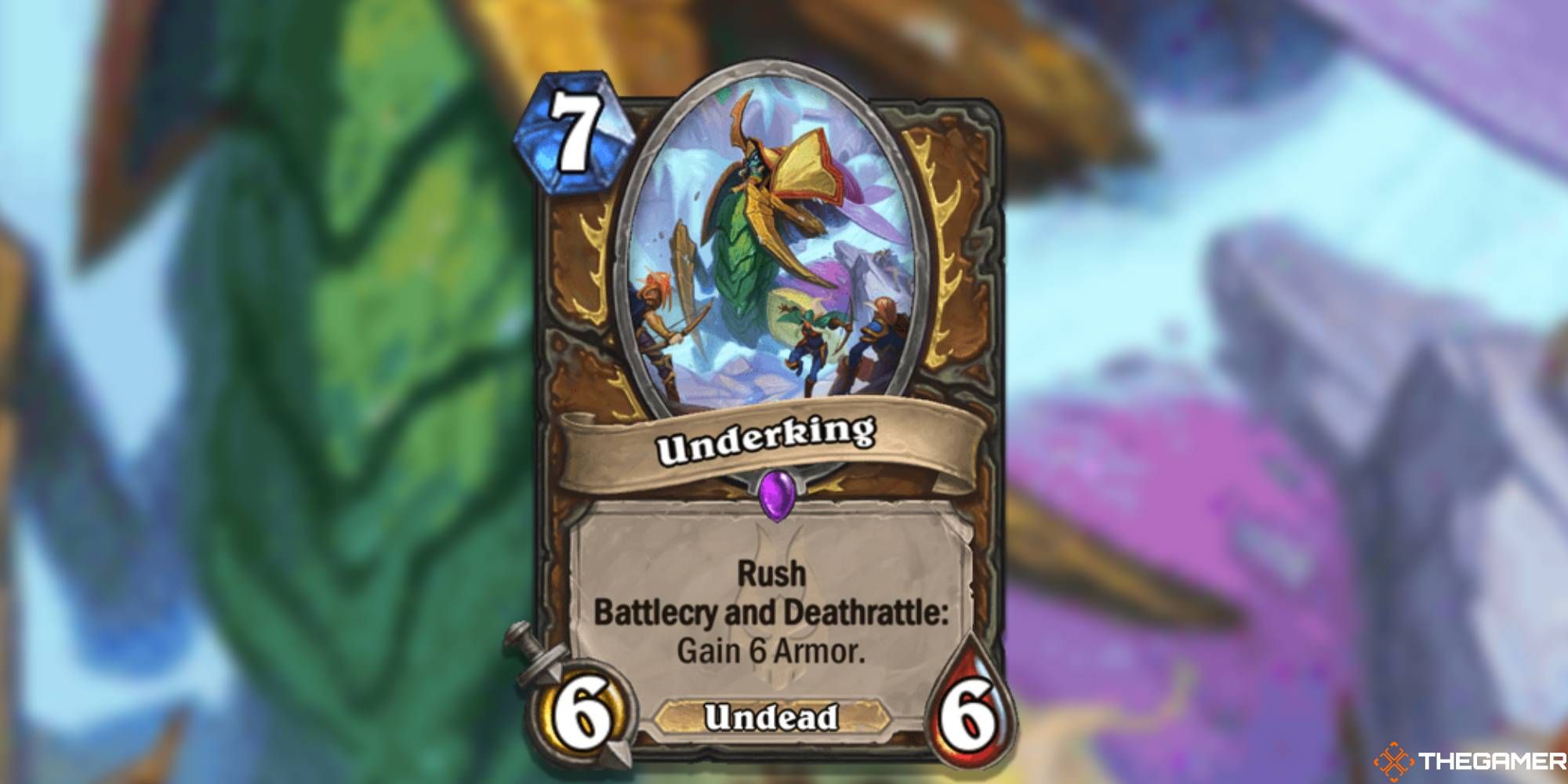 Underking is an epic Minion with high stats, making the Rush effect even more effective. This card also has Battlecry and Deathrattle, both of which give you six Armor. Playing Underking toward the end of the game can be a literal lifesaver if you’ve been hit with a lot of damage and are struggling to protect yourself.

This Minion is another card that will make Crypt Keeper cheaper and make that card more valuable in your deck. 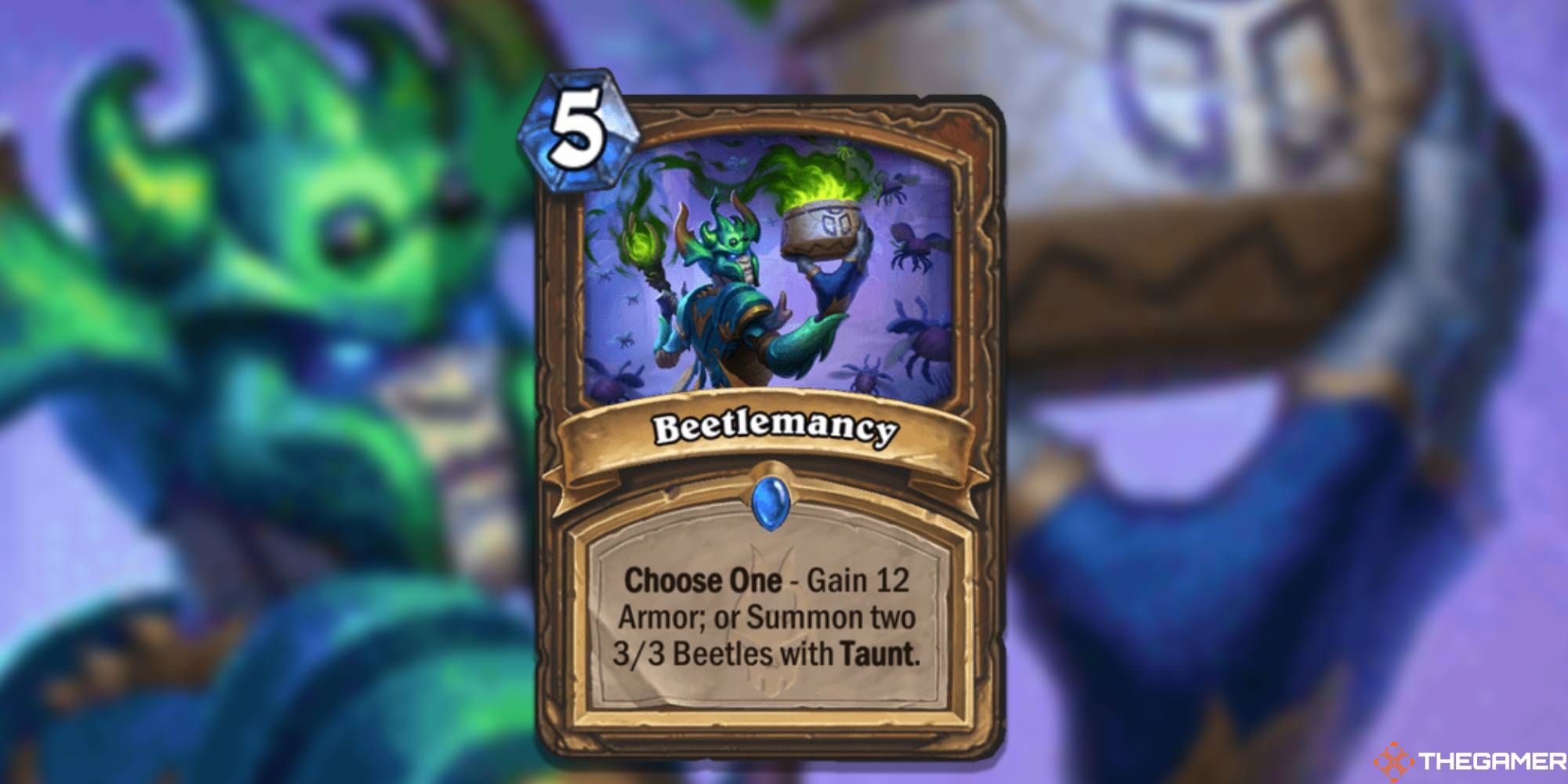 A rare Spell, Beetlemancy gives you a choice of how it helps your game. You can either get 12 Armor or summon two Beetles with Taunt and 3/3 stats. Since this Spell only costs five mana, you can play it earlier or later depending on when it’s in your hand and why you need it.

Regardless of how you play it, you get some level of protection from it, either through the Armor or as a barrier for your other cards in play. Beetlemancy also gives you more control than most Spells in Hearthstone and allows you to use it in a way that works best with your hand in the moment. 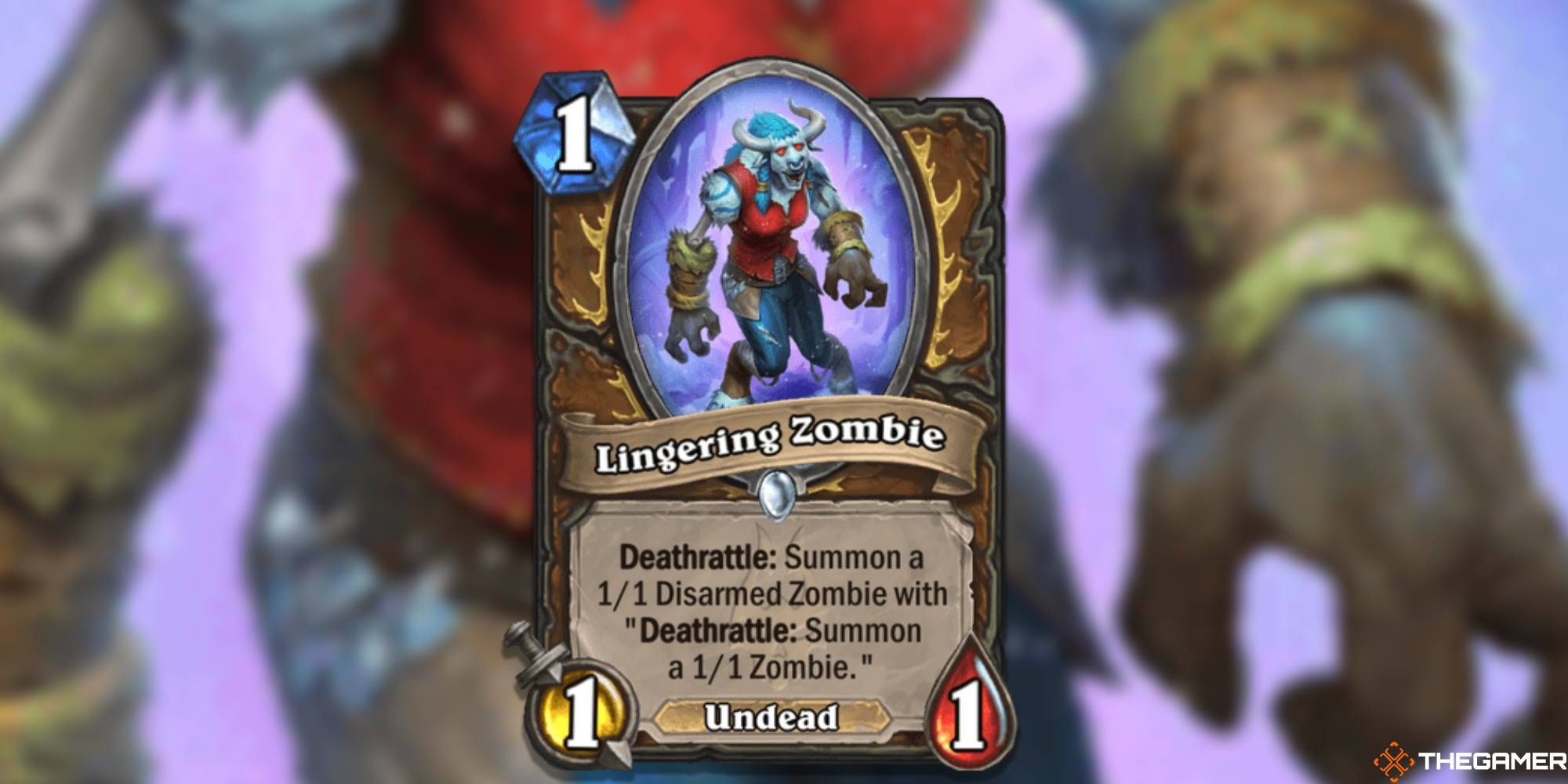 All of these Zombies have low stats, so they aren’t going to last for more than a turn most likely, but you are getting three Minions for only one mana, and they’ll occupy over three turns, allowing you to spend your limited mana on bigger and better cards. 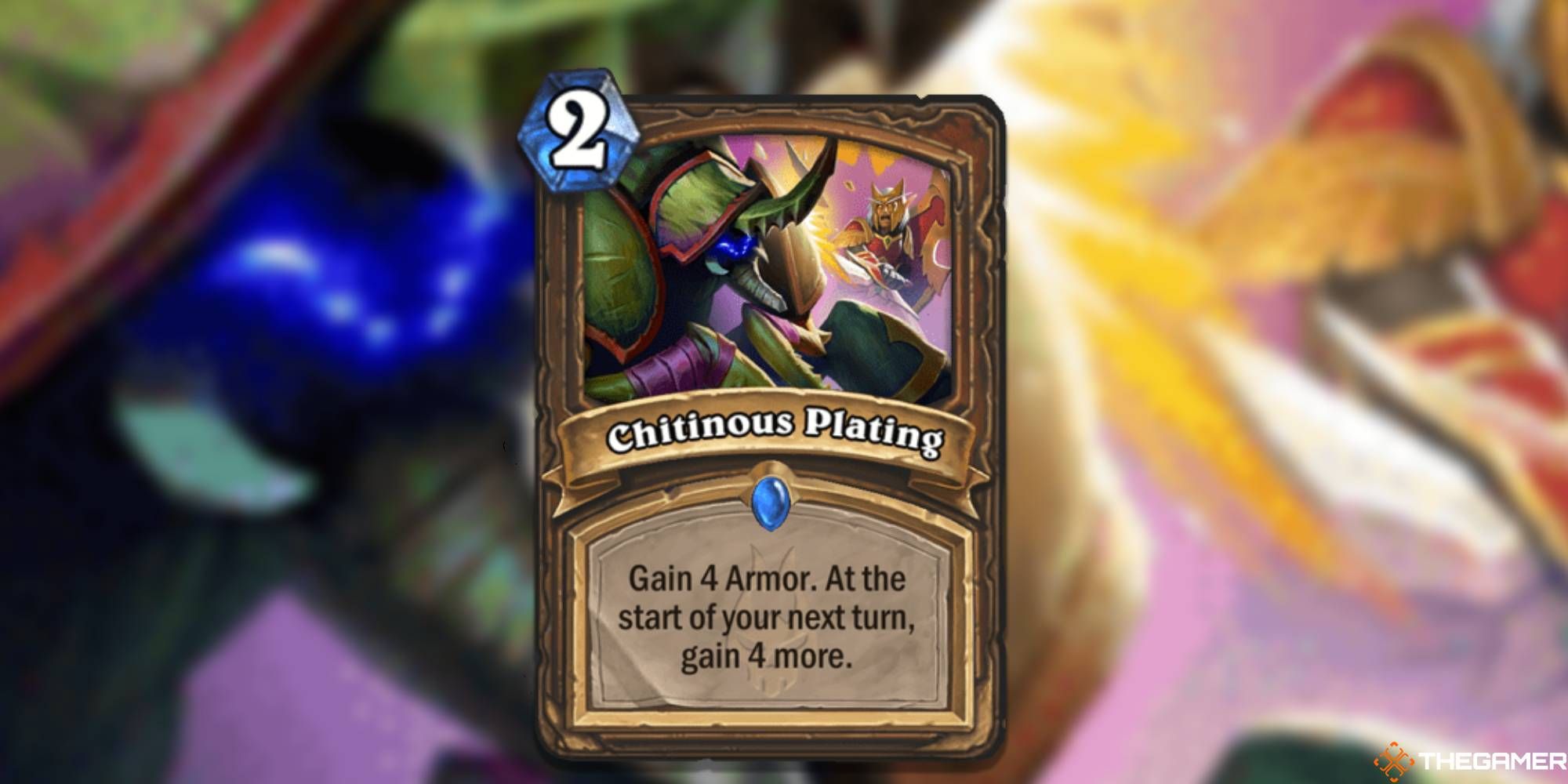 A rare Spell, Chitinous Plating gives you four Armor when you cast it, then another four Armor at the beginning of your next turn. In this way, it’s like you’re getting to play it twice for only two mana.

Armor is always a great thing to have, and the low cost of Chitinous Plating allows you to have Armor early in the game, which in turn will make Crypt Keeper cheaper (if you have it), and if you have other Armor cards like Beetlemancy or Underking, you could potentially have an Armor benefit going throughout your game.