Hearthstone: Why Next Week’s World Championship Will Be One of a Kind

Next week, 16 of the best Hearthstone players in the world are heading to Taipei for the Hearthstone Championship Tour (HCT) Finals. Running from April 25 – 28 (local time), the tournament is the culmination of a full year (and then some) of fierce competition, but it’s going to be so much more than that. This year will be the most unique competition Hearthstone has ever seen, and I absolutely can’t wait.

For a big chunk of the player base, the most exciting part of this year’s World Championship is probably the fact that it’s taking place after the Standard rotation. What does that mean? Well, when the first set of cards in a new calendar year hits the game, three old sets rotate out. This means 135 new cards come in and 400+ old cards go out. It’s a huge shake-up because a lot of the existing strategies rely heavily on those 400+ cards, so are lost altogether or drastically re-worked, while a whole lot of new archetypes emerge. It also means that the new set has a big impact, because it’s a larger percentage of the overall card pool than the expansions later in the year.

This year, the Standard rotation saw Journey to Un’goro, Knights of the Frozen Throne and Kobolds & Catacombs – three of the strongest sets in Hearthstone’s history – leave the game, and a fresh set – Rise of Shadows – enter. A number of very impactful cards, including Genn Greymane and Baku the Mooneater, were also sent to the Hall of Fame, shaking things up even more.

This all happened less than two weeks ago on April 9 (April 10 here in ANZ), so the changes are very fresh, and people are playing a range of decks that simply didn’t exist before rotation. It’s an exciting time to be a player, but imagine what it’s going to be like at the World Championship – the finalists all earned their places through mastery of strategies that have fundamentally changed. The cards are different, the match-ups are different, and everything is still in flux.

From the moment Rise of Shadows was released, all 16 players were racing against the clock to discover and hone the strongest strategies based on the new card pool.

This tournament is going to be a test of who can adapt the fastest. From the moment Rise of Shadows was released, all 16 players were racing against the clock to discover and hone the strongest strategies based on the new card pool. But how do you even tell? The meta game constantly evolves for the first few weeks of an expansion. Decks that seem strong initially can fade away, while new contenders can suddenly rise up to take the game by storm. And even once the strongest decks are established, the process of refining them continues for some time.

So where did this leave our 16 finalists? Look at is this way. They had from April 9 to April 17 – which was when they needed to finalise and submit their decklists to the tournament organisers – to try to work out what’s strong and predict what other players will do in order to build their lineup. This was a gargantuan task, testing everything from deck-building skill and game knowledge through to time management and efficiency. (You see the final decklists below.) 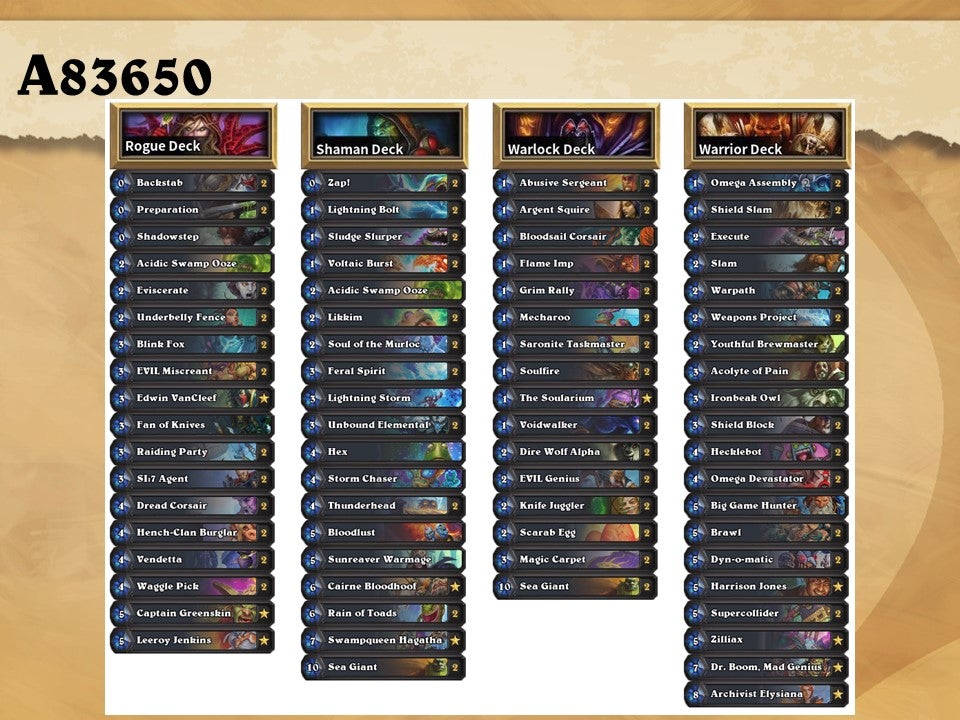 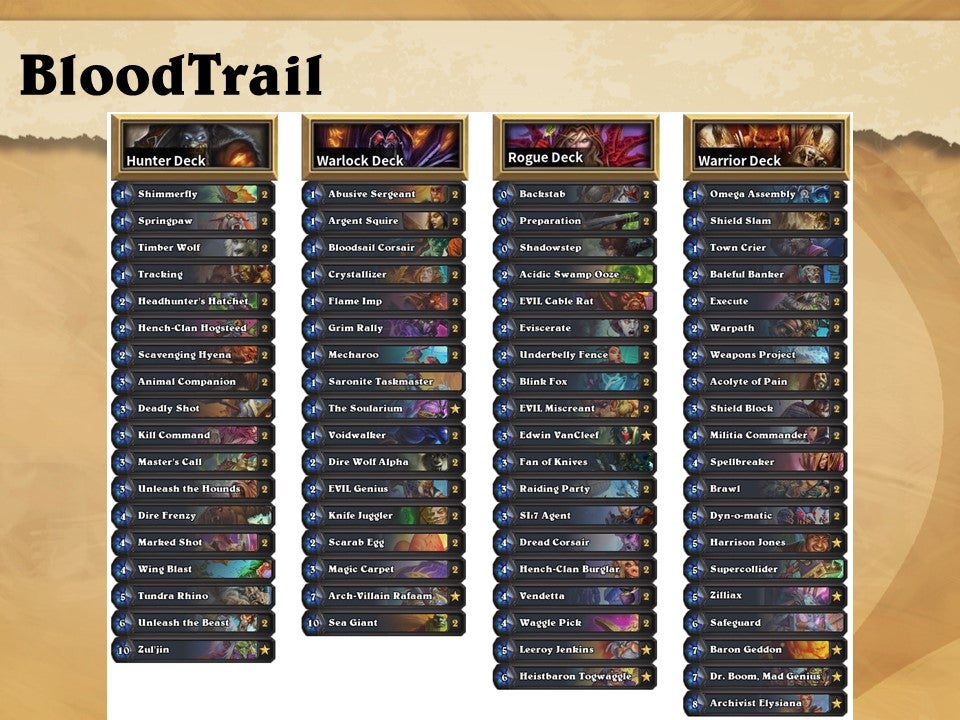 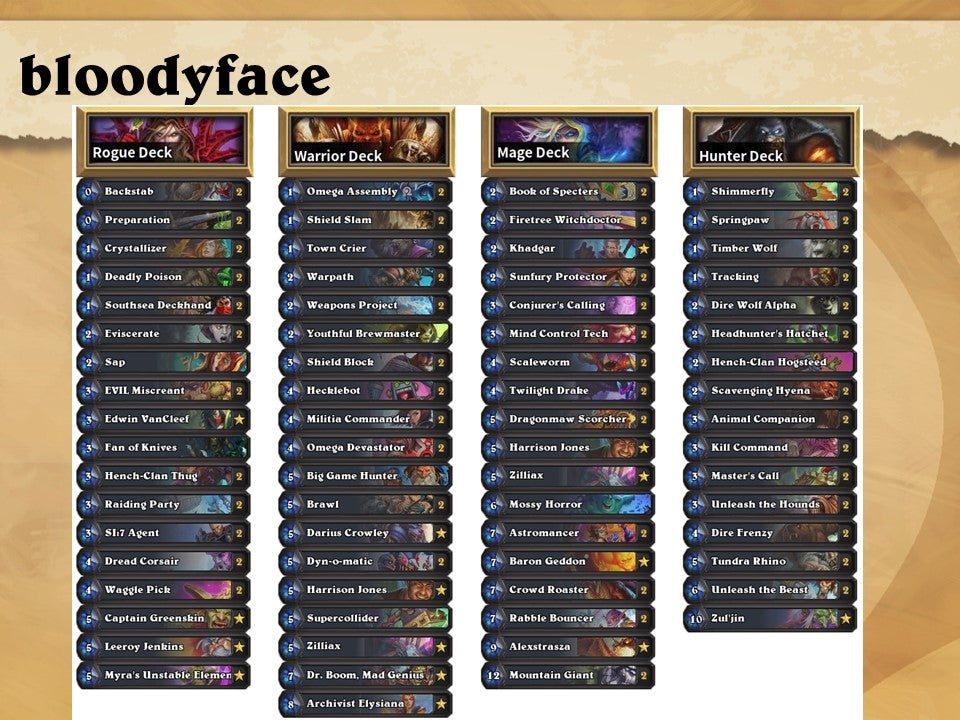 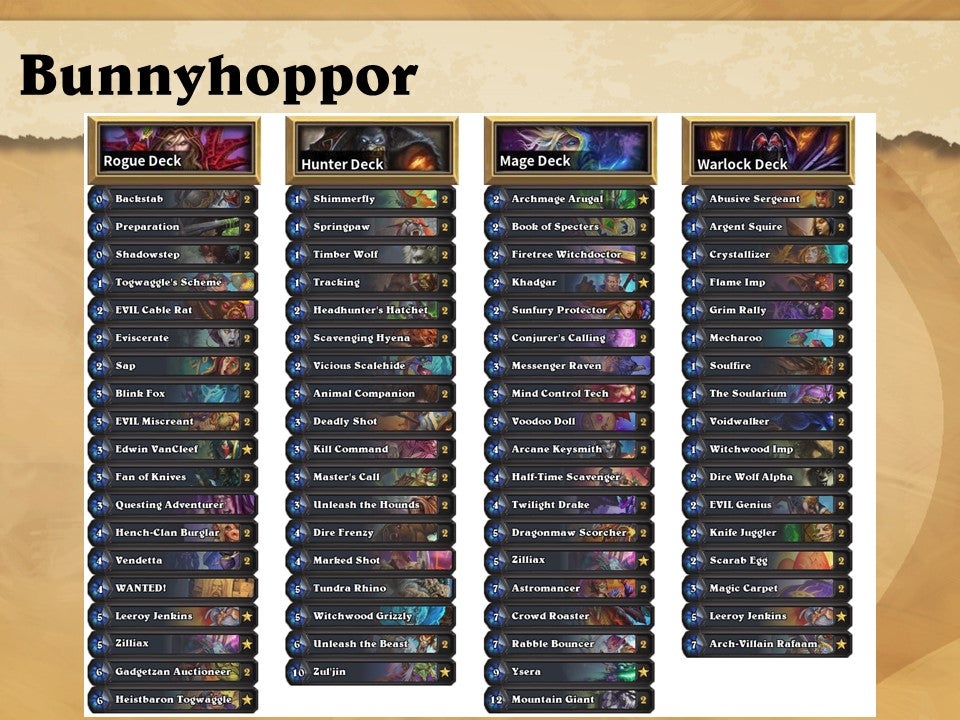 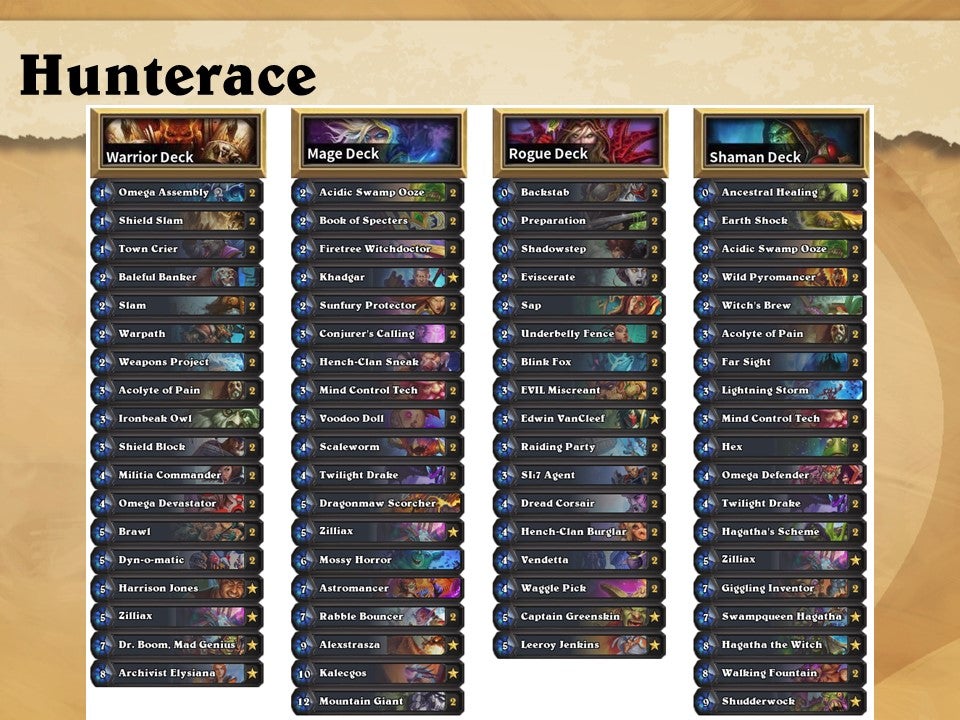 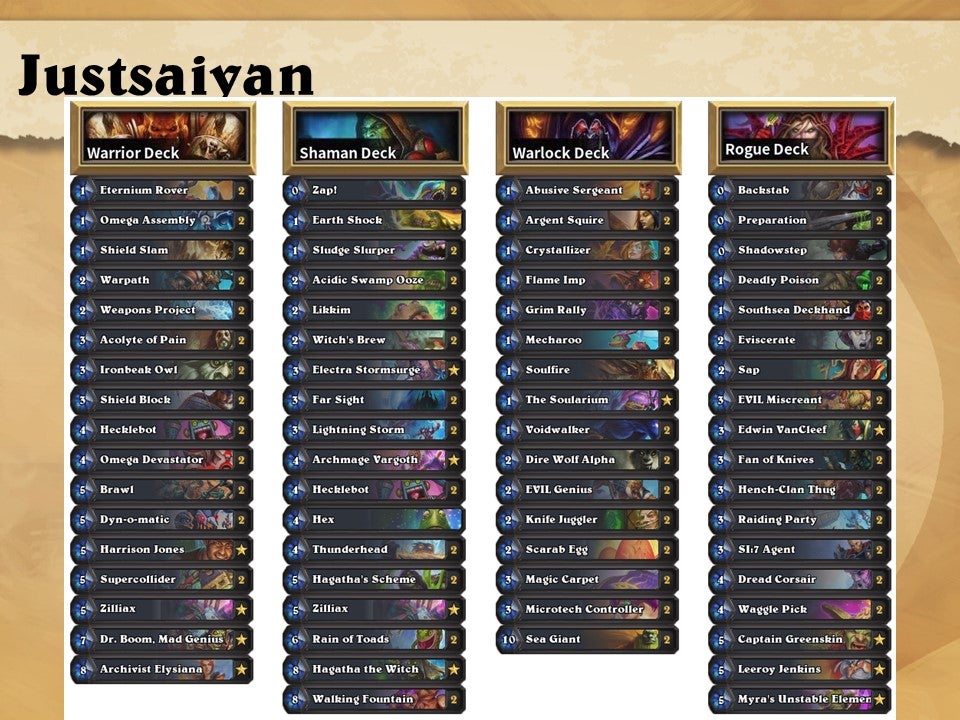 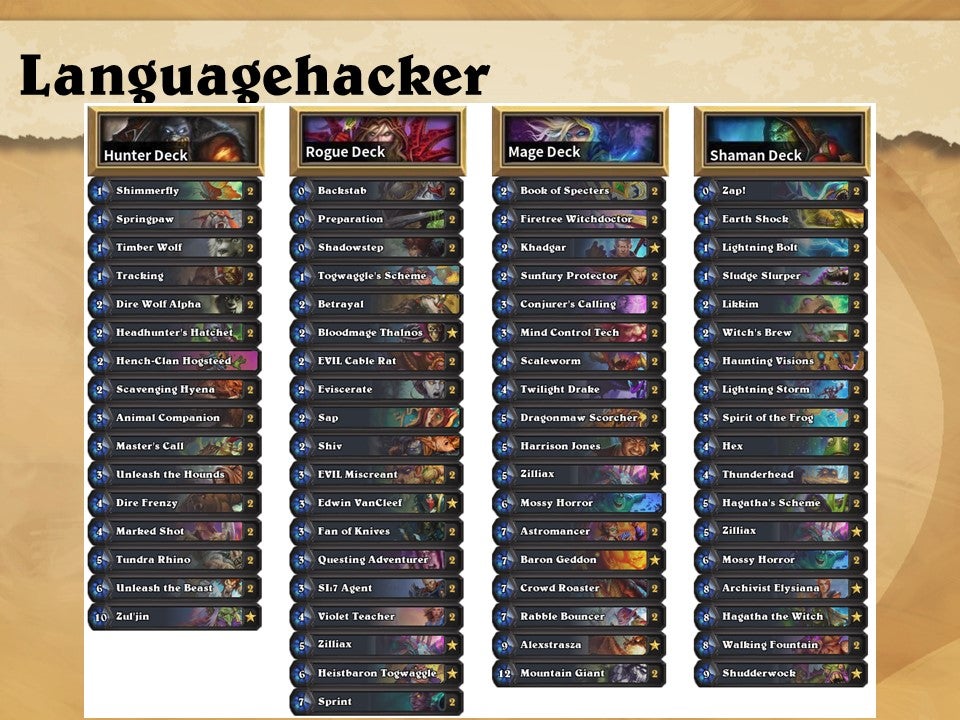 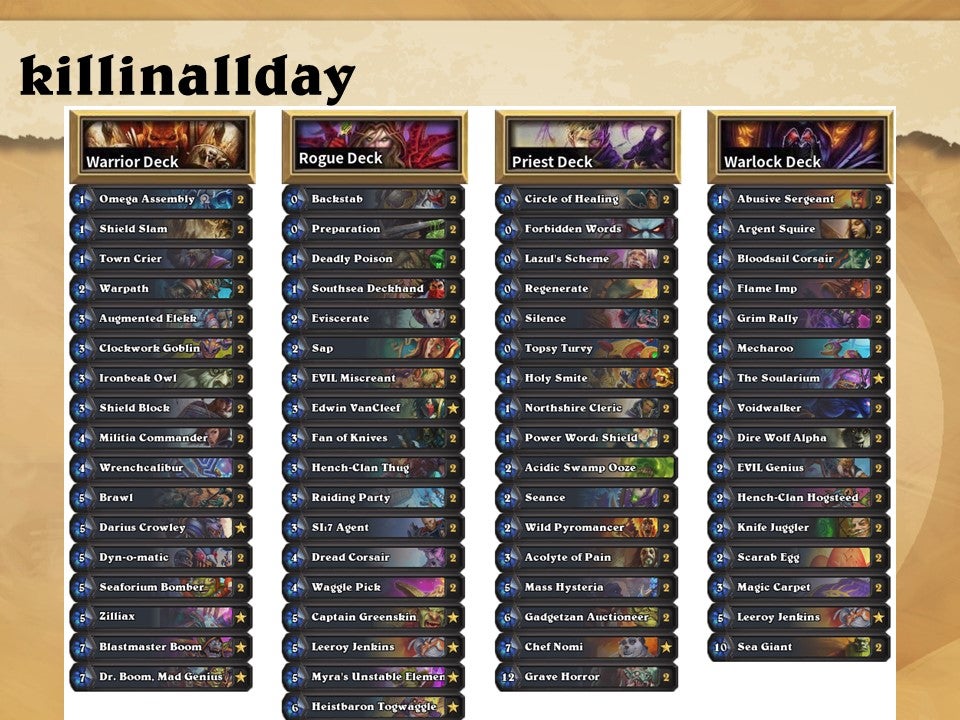 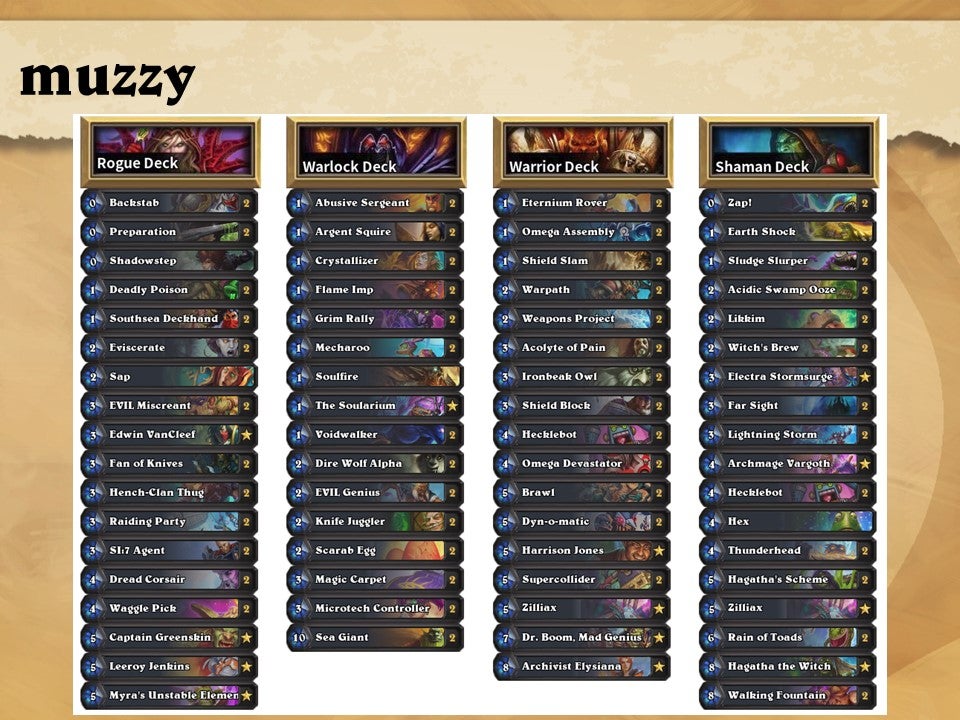 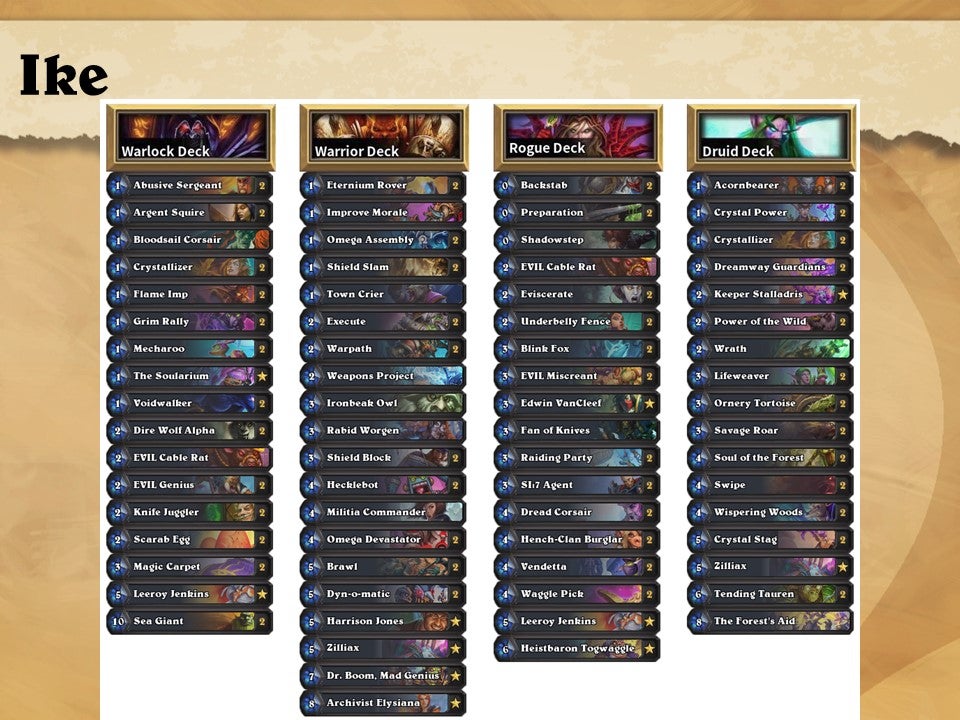 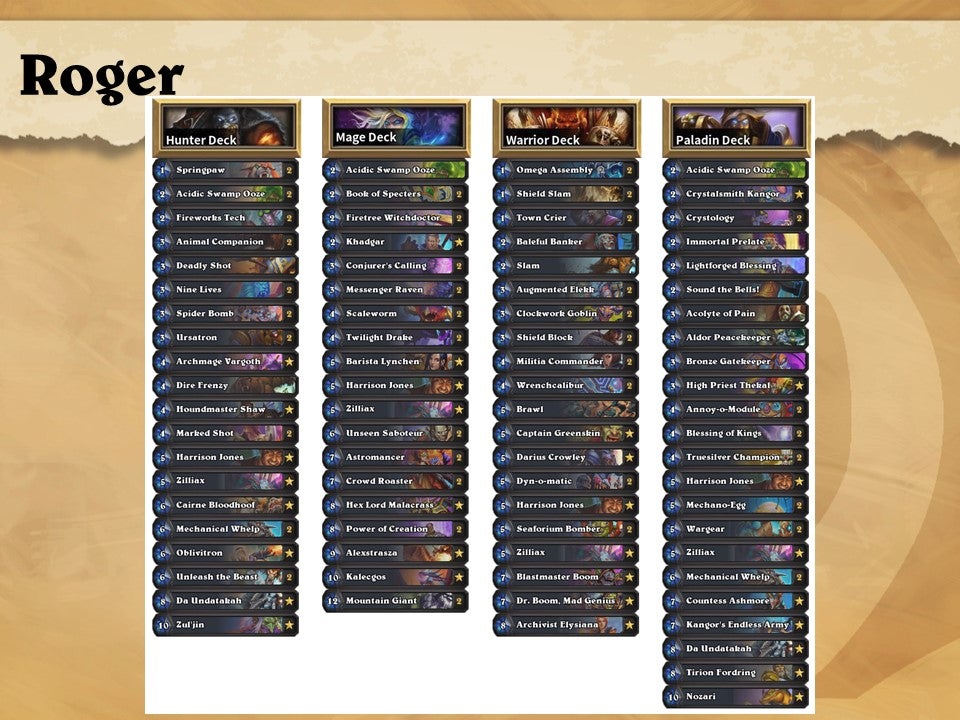 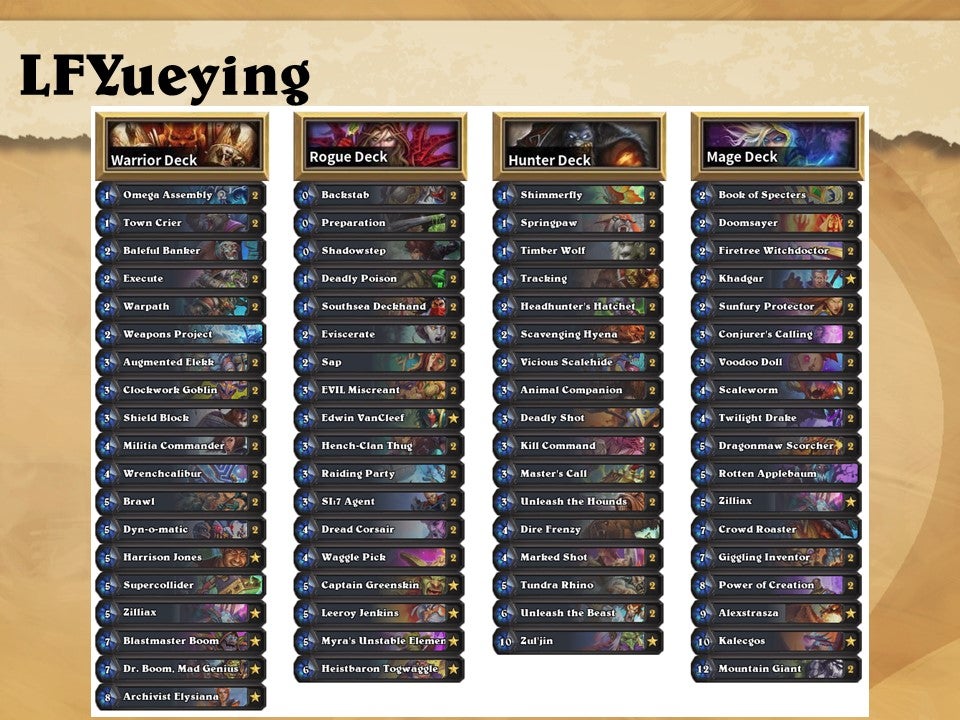 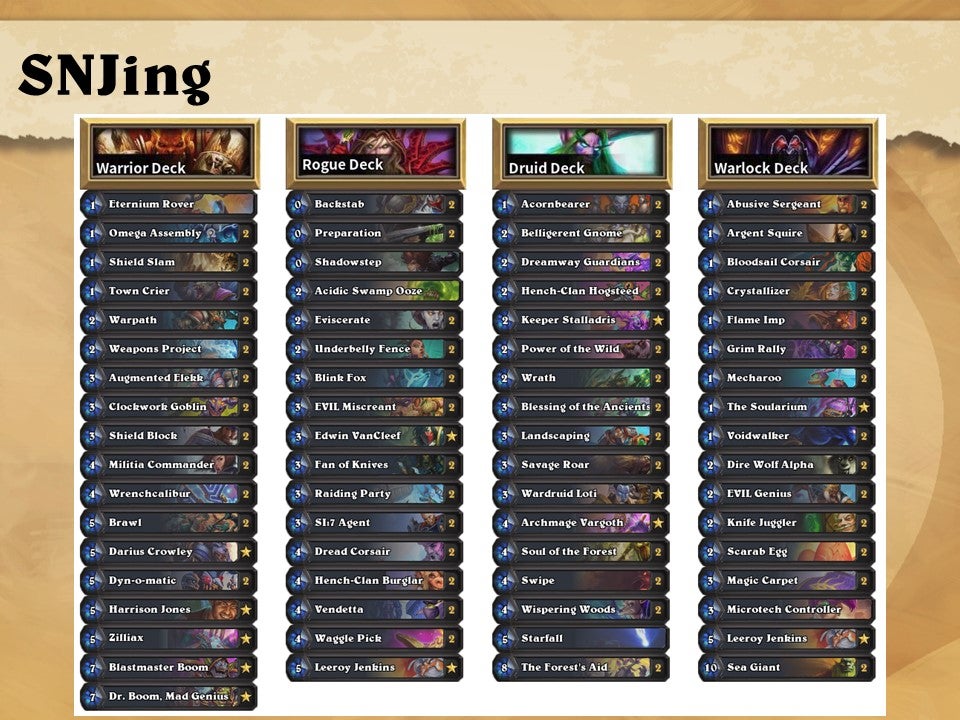 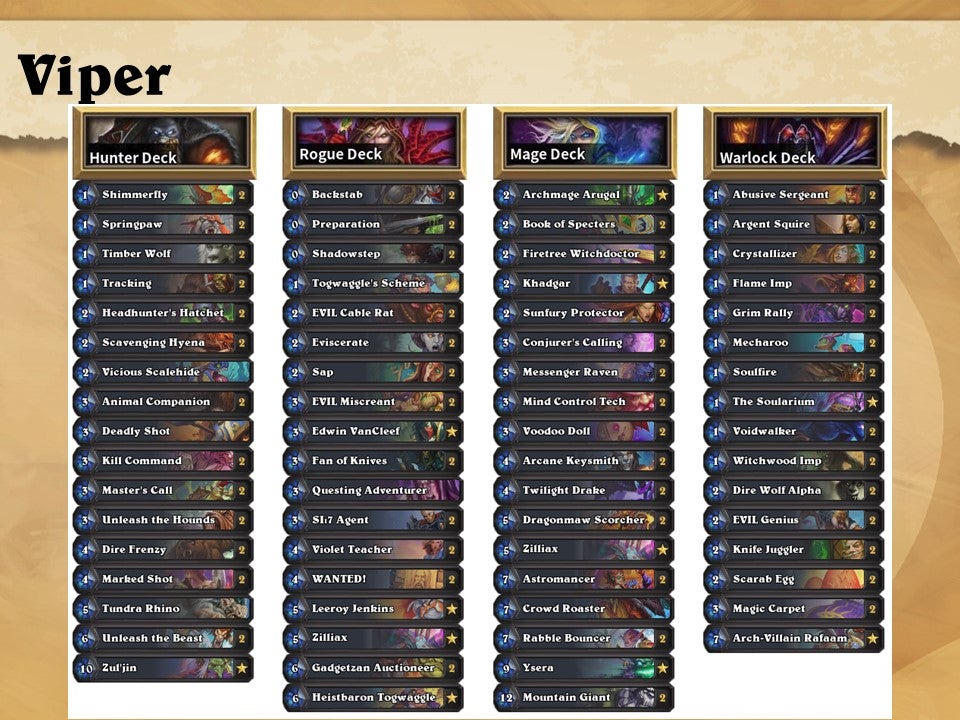 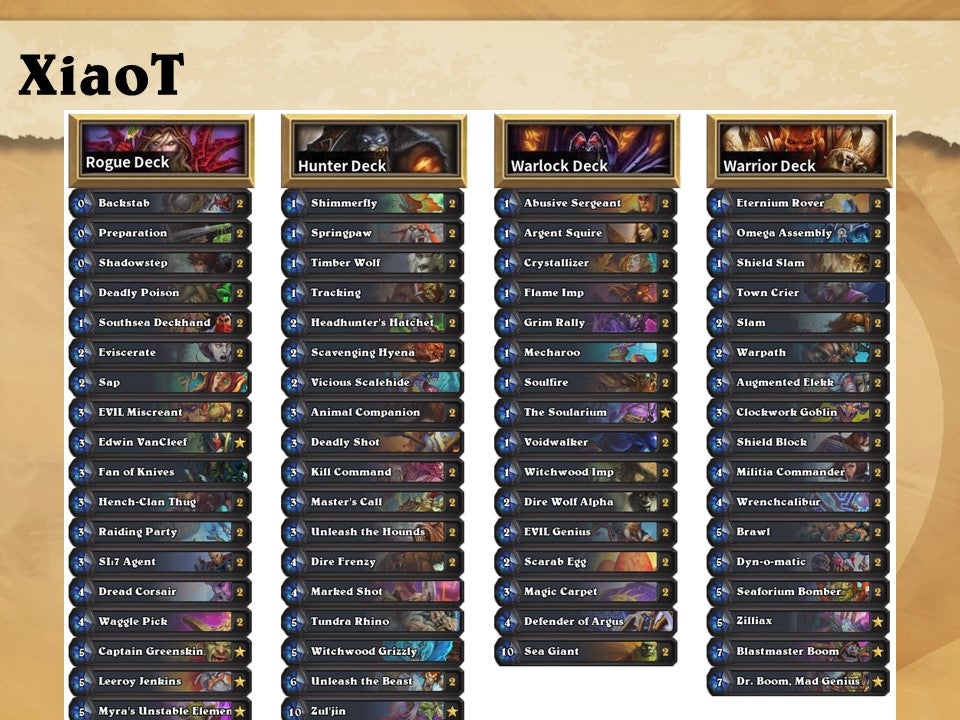 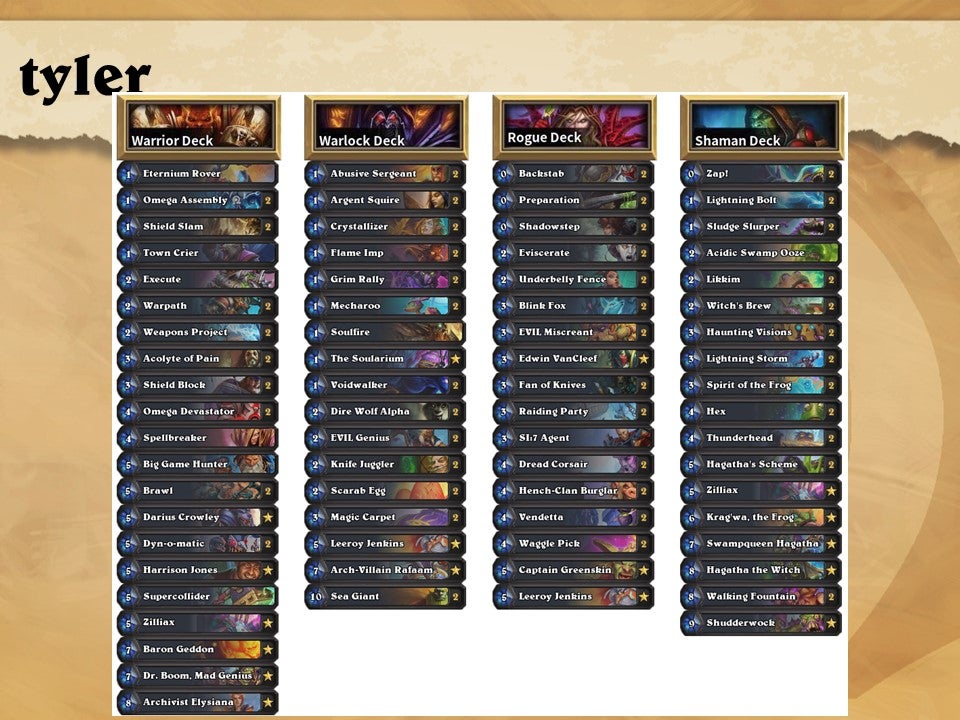 Of course, none of these players would have done this in isolation. They would have worked with their team and/or a close knit play group to build spreadsheets, test match-ups and talk strategy. You could definitely argue that the players with the best support have an advantage, but that’s always been a part of competitive Hearthstone.

The bottom line is – we’ve never seen such an absurdly short amount of time to prep for an event of this magnitude. Last year’s World Championship, for instance, kicked off on January 18, almost two and a half months after the release of Kobolds & Catacombs – which was the third set of the Hearthstone year, and thus the last set before rotation. The meta changed less, in other words, and players had way longer to prep. This meant the top 16 came into that tournament with a thorough understanding of the minutia of every single match-up. This year that simply isn’t possible – the players will have had just over two weeks to try and master the new meta before they’re up on stage. That will no doubt hurt some, while showcasing the talent and broad experience of others. Oh, and did I mention that the tournament has a USD $1 million dollar prize pool?

So that’s one reason why this tournament is going to be unique – and a whole lot of fun to watch – but there’s another. The World Championship is going to be the last hurrah for the Conquest tournament format. Hearthstone esports has already moved on to a whole new system (HCT has been replaced by Hearthstone Masters and Hearthstone Grandmasters), and the qualifiers that feed into the first Masters Tour event (taking place June 14 – 16 in Las Vegas) are already using the new Specialist format.

What’s Specialist? These tournaments see players bring one class, with a primary deck, a secondary deck (which can vary from the primary deck by five cards) and a tertiary deck (which can also vary from the primary deck by five cards) in best of three battles. It’s a little like side-boarding in Magic the Gathering, and a massive change from Conquest, in which players bring four decks (all different classes); one of which will be banned in each match, and then must win once with each of their three remaining decks. As you can imagine, there’s a huge amount of strategy in determining a lineup and having a ban strategy. And there’s a lot of knowledge and skill in learning how to pilot four separate decks against the field.

It’s only fitting that we say goodbye to Conquest on Hearthstone’s biggest stage.

It’s only fitting, then, that we say goodbye to Conquest on Hearthstone’s biggest stage. And importantly, it’s cool that we’re going to have a direct point of comparison between the old format and the new. We get to see what a Conquest tournament is like in the new Rise of Shadows meta, and then in June we’ll see how it plays out using Specialist.

The final piece of the World Championship puzzle is just how stacked this top 16 is. It’s arguably the strongest lineup we’ve ever had for Worlds; these guys have shown incredible consistency and drive over the last year, and it simply wouldn’t be a fitting finale without the likes of Bunnyhoppor, Justsaiyan, Tyler, Muzzy, Hunterace and so on. The whole thing will be streamed on the PlayHearthstone Twitch channel and runs from April 25 – 28 (April 24 – 27 in the evenings for NA) so check it out – it’s going to be HUGE.

Cam Shea is Editor in Chief for IGN’s Australian content team and is surprisingly average at Hearthstone given he’s been playing it for five years. He’s on Twitter.