How To Host And Raid Someone On Twitch

It’s not easy starting out as a small streamer. First-time Twitch broadcasters tend to get bogged down too much in viewership numbers and time spent streaming rather than learning all the ins and outs of the platform before hitting the Go Live button. From raiding other’s channels to growing your own community, there’s a great deal to learn before becoming that ideal Twitch broadcaster you vie to be one day. 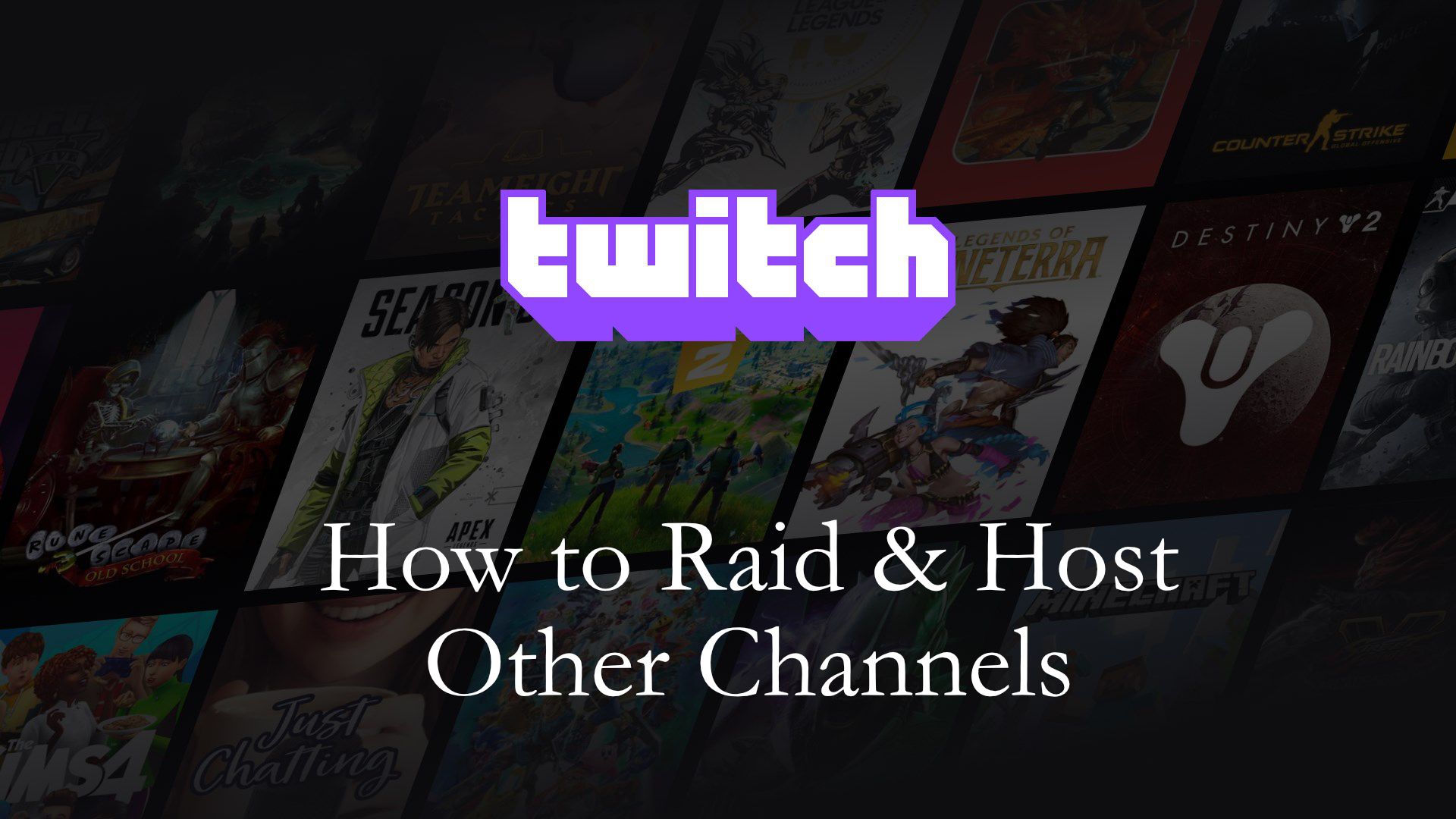 One of the best ways to enhance your viewership and connect with other audiences on the platform is through what is called hosting, which basically allows another’s stream to be viewed on your channel. It’s a bit different from a raid, wherein the streamer culminates their broadcast by bringing all their viewers to another stream, yet a raid does still end up hosting that other streamer’s broadcast, so they both still go hand-in-hand by accomplishing a similar goal: networking.

There are several ways to host someone on Twitch, but not all of them are as easily understood by newcomers. Below we will unravel all of the ways hosting works and how best to use it in order to thrive on this still ever-growing platform.

As previously mentioned, there is a bit of a difference between a host and a raid on Twitch. A raid is best utilized at the end of a broadcaster’s session, leapfrogging their viewers with them to another’s stream. It’s a great way of building rapport across the platform, in tandem with growing your name image and audience. You’re also showing support and love for other smaller streamers by helping them grow, which is paramount on a platform that is far surpassing even YouTube gaming viewership in Q1 of 2021.

To raid someone on Twitch, simply type in the command starting with a forward-slash then “raid” in your chatbox in the OBS software while you are live and before cutting the stream. Simply typing in the forward-slash will automatically cue up a number of different options, so you can just as easily choose it from amongst that pop-up menu, as well. With the command set, type in the channel of your choosing, but make sure to spell it correctly, or else you will be dragging you and your chat to unknown territory. 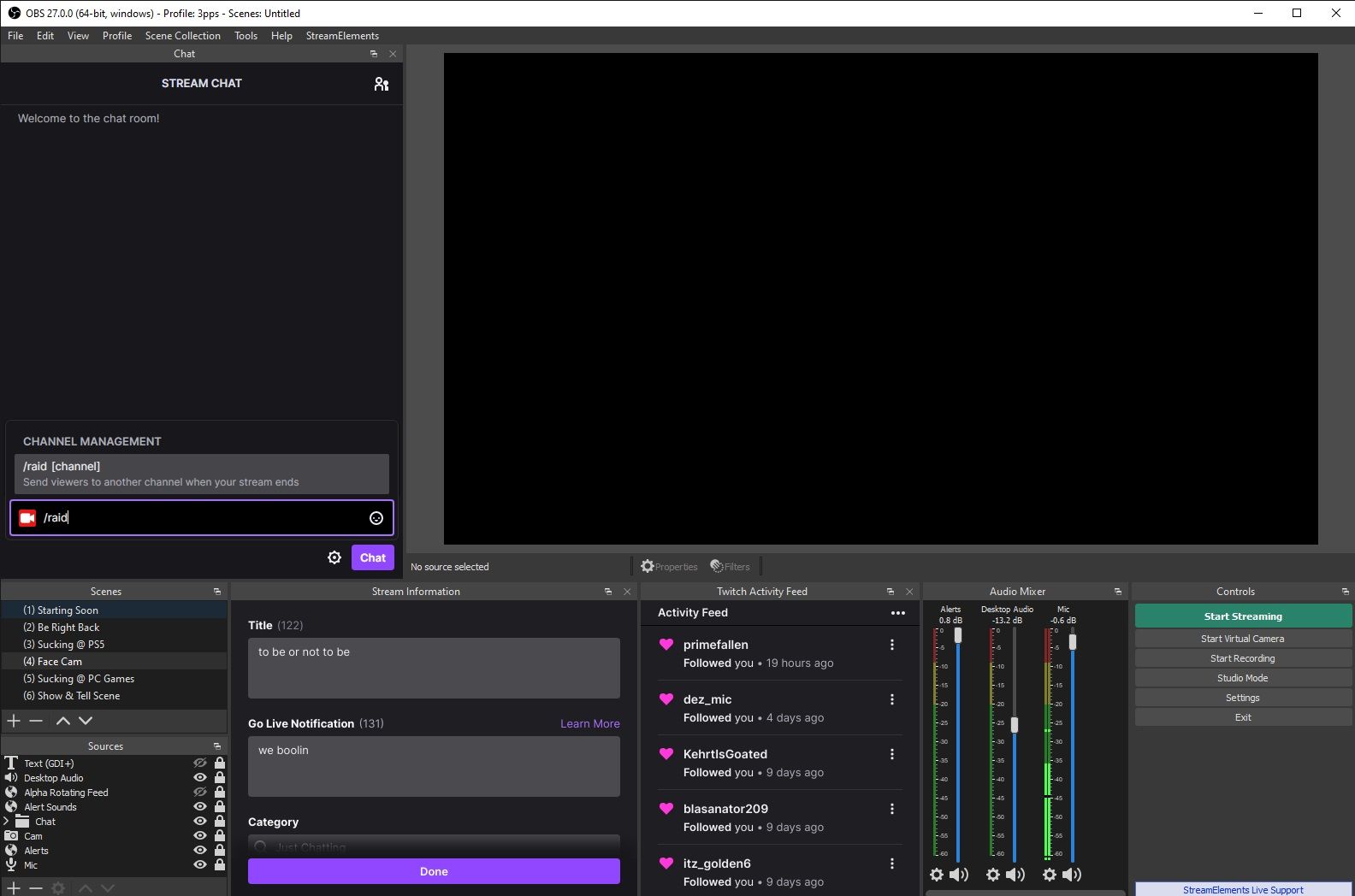 A timer will start, indicating how long you have before the raid commences and you will also have the option to “Raid Now” if no extra time is necessary. It’s best to ensure the channel you are intending to raid is online and isn’t already hosting another channel before hitting the command, so you aren’t leaving your chat in some random hot tub stream. As a common courtesy, you will also want to stick around in the broadcaster’s chat for a bit following the raid, thus building that support and community alongside your own viewers.

Once you have raided another streamer’s channel, you will automatically be hosting their broadcast, so it can be viewed and enjoyed by everyone on your channel, as well. As for hosting another streamer on Twitch, there are three main methods…

The first and the most common method to host someone on Twitch is identical to the raid, simply by way of typing in the forward-slash key in your own chat window (whether that be in your browser or OBS software, it does not make a difference) and selecting the host command among the given options. 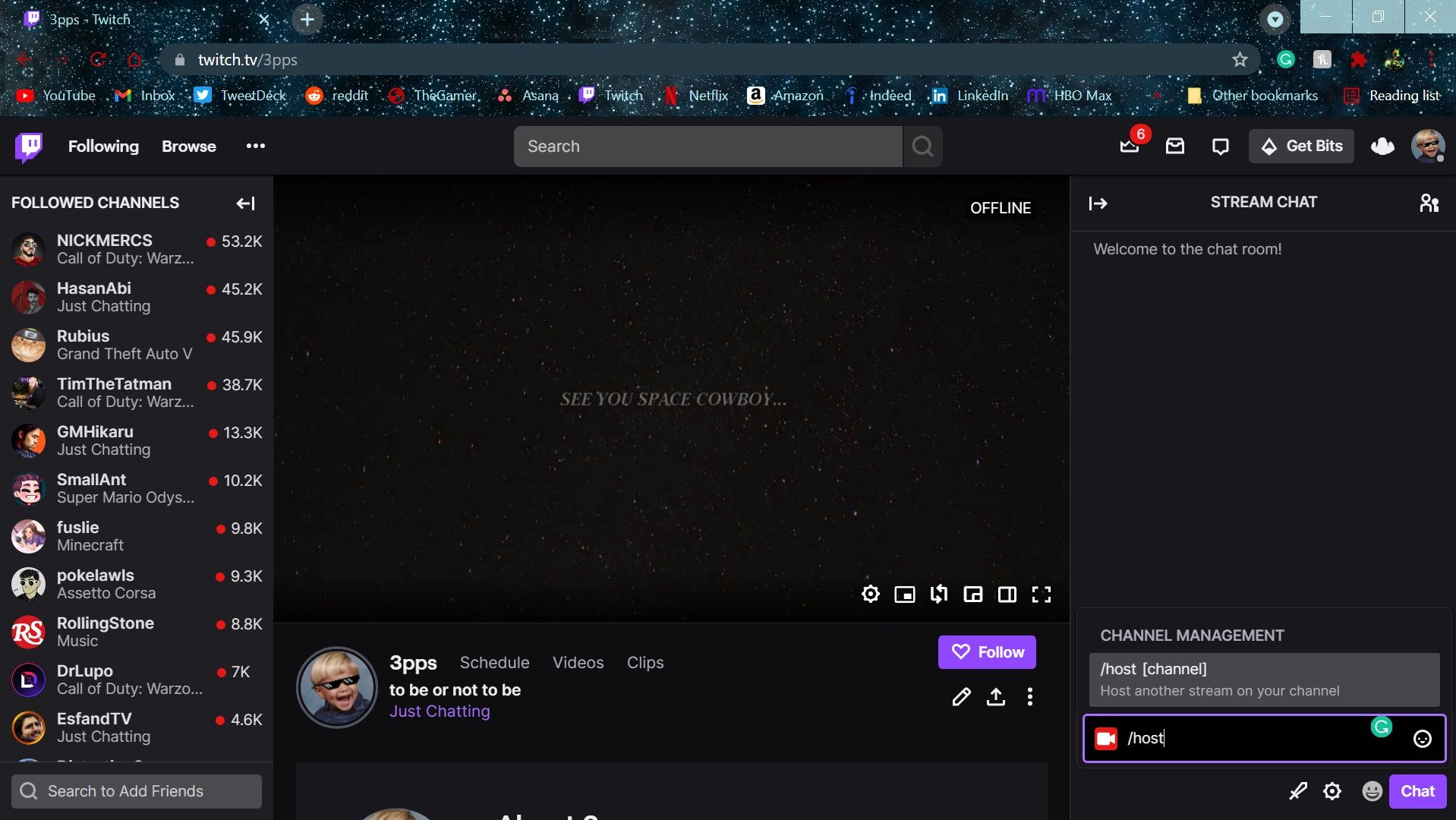 With the host command selected, type in the name of the channel you wish to host and their broadcast should automatically show up on your channel. They will be notified that you have hosted them, which will (hopefully) lead to a big thank you and a shoutout.

The second option and the most hands-off approach to hosting someone on Twitch is by activating what is called auto-hosting in your user settings. To activate this, click on your own icon at the top of the screen and select settings, then hit “Channel and Videos.” From there, navigate to “Featured Content” and the Auto-Host settings will be front and center. 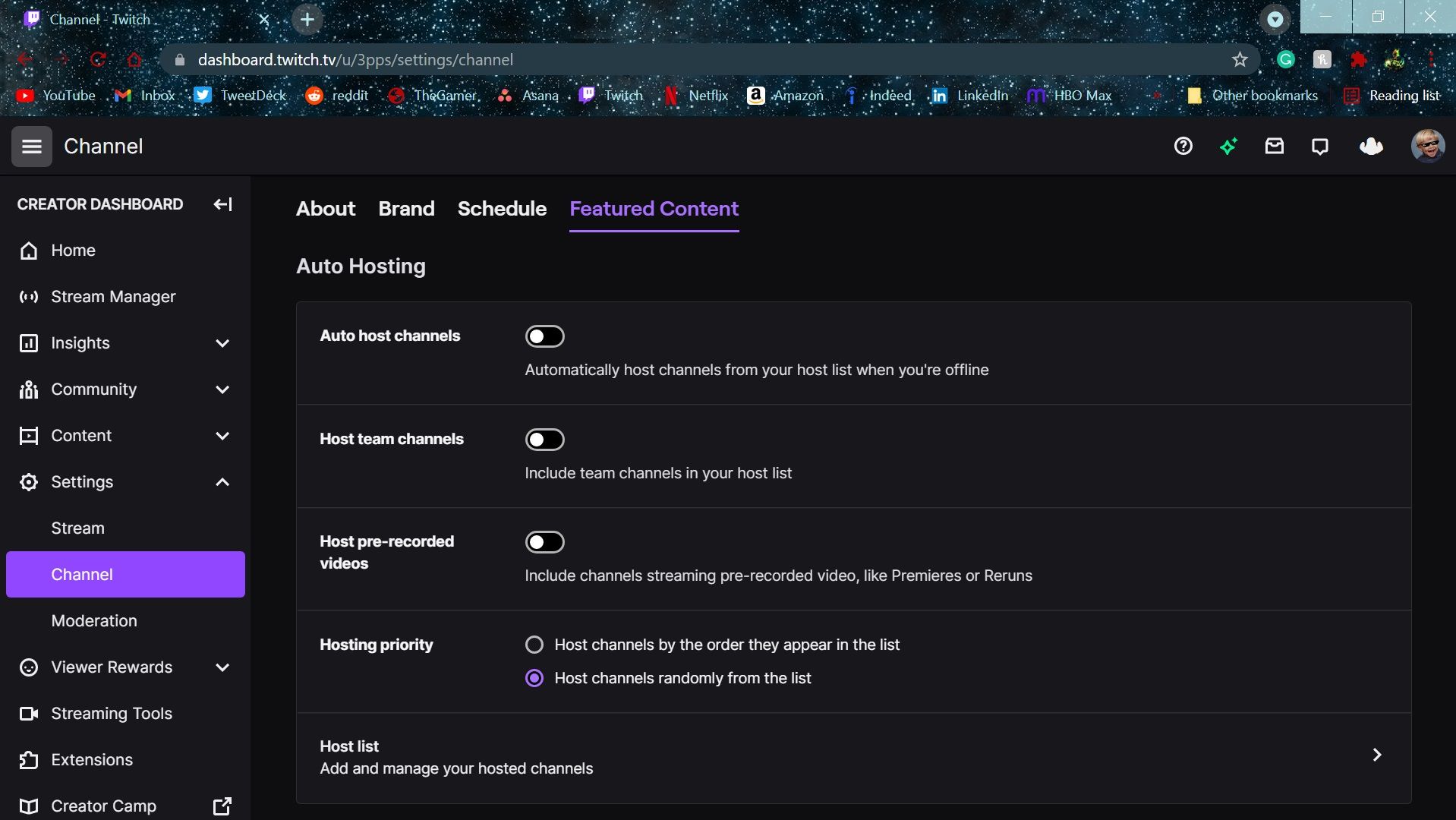 With auto-hosting enabled, your channel will automatically host broadcasters of your choosing whenever they go live, making this arguably the most streamlined and hassle-free approach. There are a variety of ways you can set this up to suit your own needs, as well as your own community’s.

For instance, if you regularly co-stream with a friend or are already in a team of streamers, you can populate your channel with their broadcasts when you are offline, assisting them even while you’re away – and you don’t even have to click a single button.

The third method of hosting someone on Twitch takes away all of those annoying steps of going to your own chat and typing in the forward-slash by way of making the host command a simple click at the broadcaster’s own channel. For this approach, you will have to be using Google Chrome, which may well limit its users a bit, but comes in handy and is an all-around necessity for Twitch regulars.

The chrome extension in question is called FrankerFaceZ. It, much like its beloved cousin BetterTTV (BTTV), makes Twitch all the more simple and opens the floodgates for a slew of new features, main among them being a simple host button on every streamer’s page. Even better is the additional unlock of secret emotes, like MonkaW and OmegaLul, which are immediate standouts in the Twitch community and ensures you aren’t stuck with the new perpetual PogChamp. 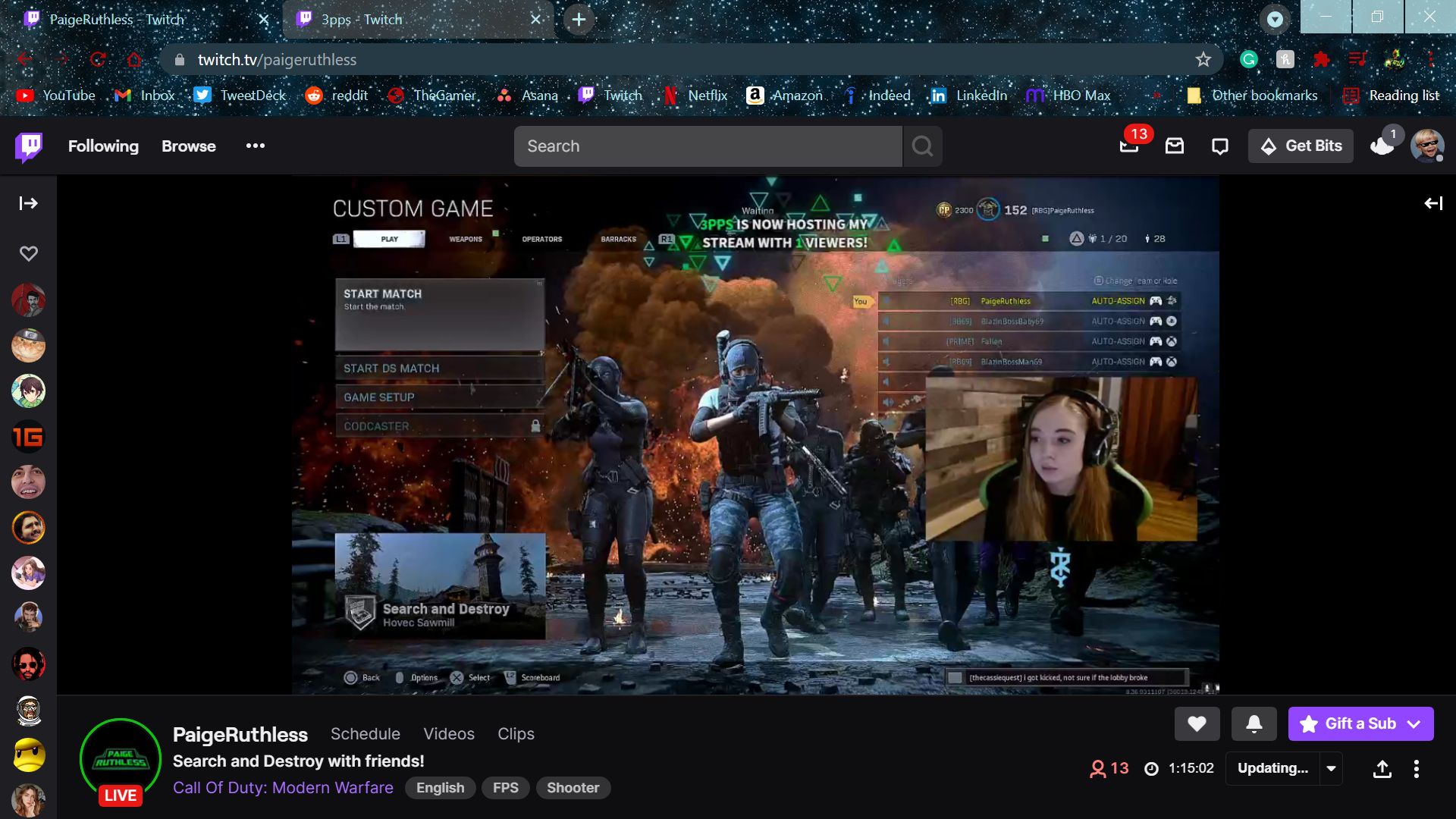 Both FrankerFaceZ and BTTV are absolute Twitch must-haves and make the platform all the better. Once added to your chrome browser, the host option along with the uptime and sound compressor for every broadcast should automatically be available at the outset. If not, you can always check the settings by clicking the upside-down dog face at the top of the page, select “Channel” in the drop-down menu, and “Behavior,” wherein you will find the option to enable channel hosting. It’s that simple.