Is It Possible To Play And Enjoy Aliens: Fireteam Elite As A Singleplayer Shooter? I Gave It A Shot

I gave up multiplayer a long time ago, because I just prefer playing games on my own these days. As a result, and despite being a massive fan of the Alien series, I didn't pay much attention to co-op shooter Aliens: Fireteam Elite. The fact that it was yet another game about cocky Colonial Marines mowing down hordes of xenomorphs with pulse rifles didn't help either. But then I saw it on Game Pass and wondered: if I played it with bots and treated it like a singleplayer game, would it be any good? So I downloaded it and, well, my feelings are mixed.

Story-wise, it's Aliens by numbers. A squad of Colonial Marines, in which you are a lowly grunt, is sent to investigate a refinery that's been invaded by xenomorphs. This leads to the discovery of a planet where the evil Weyland-Yutani megacorporation is (you guessed it) conducting sinister experiments on humans involving xenomorphs. The narrative is fine but flimsy, and basically an excuse to shoot thousands of aliens and gun-toting synths. Don't go into Fireteam Elite expecting to be told a compelling or otherwise interesting story. 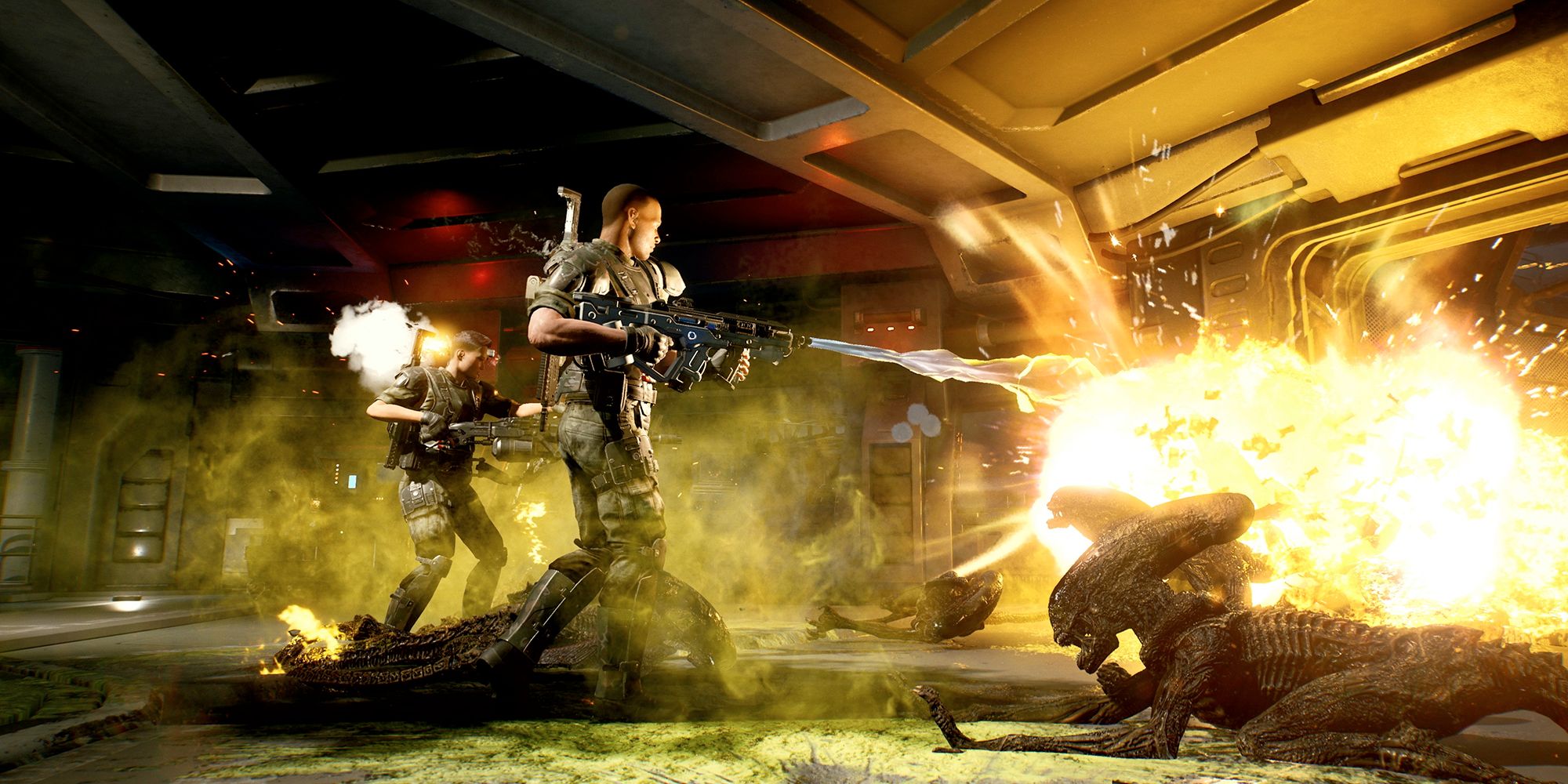 However, as a fan of Prometheus (there are dozens of us), I do like how elements from the most recent Alien movies have been incorporated into the game. I enjoyed visiting an ancient Engineer city, complete with giant stone heads, and the infamous 'black goo' even makes an appearance. But these connections to Alien's cinematic universe are ultimately pretty superficial, mainly there to give you different environments to blast your way through. If you're a fan of this setting and mythology, you will get something (but not much) out of it.

While the game is clearly designed to be played with two actual humans, I've been working my way through the campaign with Alpha and Beta: a pair of AI-controlled Marines. They're explained in-universe as being combat-trained synthetics, and they have the weird, uncanny rubber faces of Isolation's Working Joes. But on the battlefield they are not great teammates, fighting at the most basic level and never bothering to heal me when my health is low. They're totally silent too, making ploughing through the game's waves of xenos feel quite lonely.

Structurally, Fireteam Elite couldn't be more basic. You move through the level, a door locks, and a massive group of aliens rushes you. You kill them all, the door unlocks, and you move on. Sometimes you get pre-warning of an incoming horde and are given time to lay traps and turrets before pressing a 'release the aliens' button disguised as a terminal or power generator. You kill them all and move on. With friends it might be more engaging, but even the worst games are improved by multiplayer. Playing solo, the feeling of repetition sets in fast. 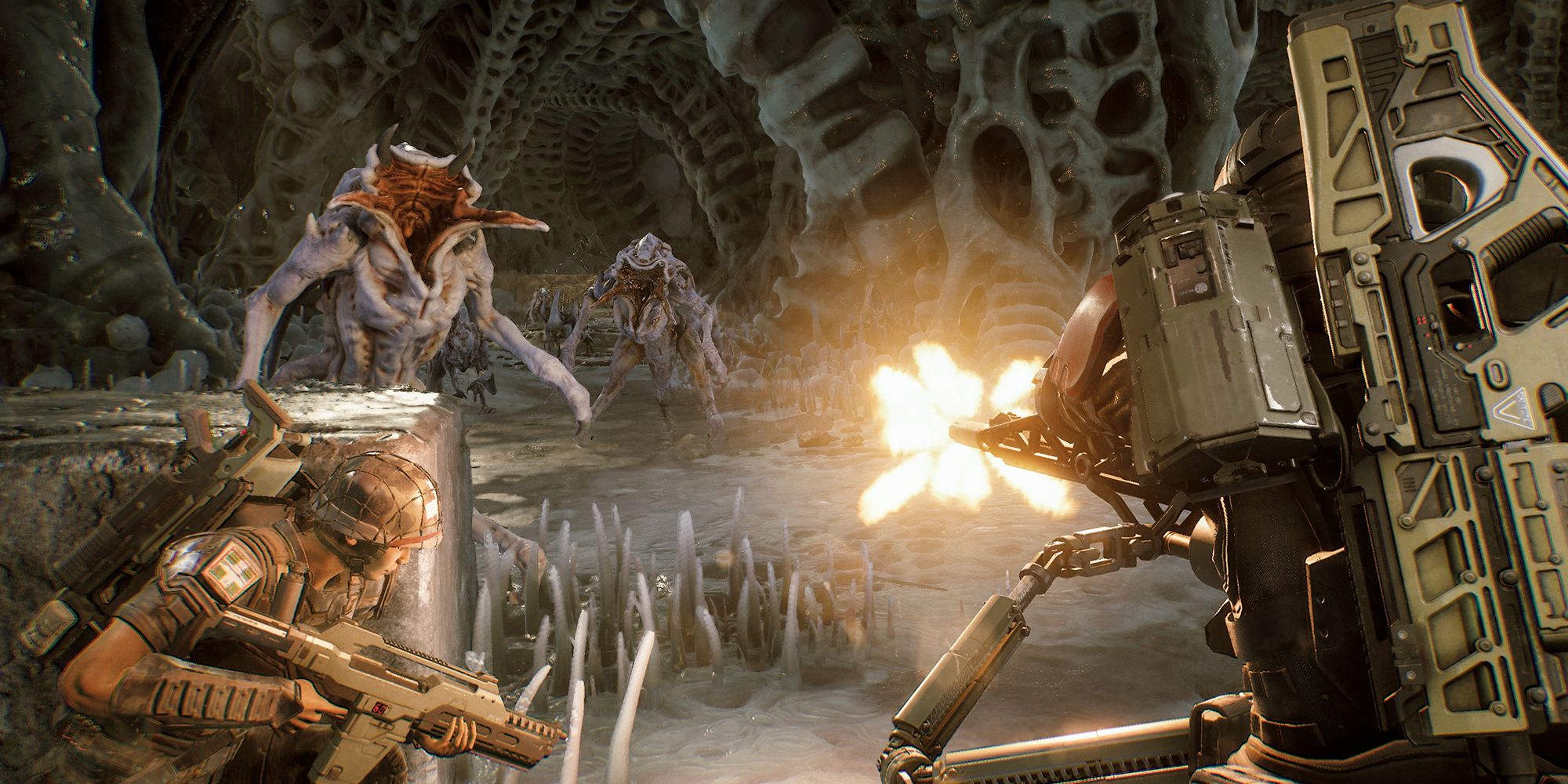 But something kept me playing. Shooting seemingly endless waves of xenos is quite cathartic, in a brains-off kinda way. Occasionally a Drone or Warrior—more powerful forms of xeno—will be thrown into the mix by the AI, Left 4 Dead style, which increases the excitement (and challenge) levels. But mostly I was just interested in where the story was going and what environments it was going to take me to next. Not because it was gripping, but purely because as an Alien fan I'm always interested in what people do with my beloved series.

Fireteam Elite is not a great singleplayer Aliens shooter. But, surprisingly, I don't hate it either. The weapons feel nice enough, the aliens pop satisfyingly with a splurge of acid blood when you kill them, and some of the environment design (particularly that Engineer city) is quite striking to look at. The MMO-style character progression also tickles that pathetic, easily swayed part of my brain that likes seeing numbers steadily tick up. I wouldn't spend money on it, but if you're an Alien enjoyer and you have Game Pass, you could do worse.