There are many juicy details in Golden Wind that might surprise new JoJo fans. For instance, it’s common knowledge that Giorno is DIO’s son. But, did you know the young man is not Italian? Giorno Giovanna isn’t even his real name!

You could watch through five seasons of the JoJo anime or read over half the manga series to understand Golden Wind. Or, you could skim through the JoJo Glossary in JoJo’s Bizarre Adventure: All-Star Battle R. Normally, unlocking this arc’s glossary requires the completion of two boss battles in ASB Mode. However, we went through the trouble and listed the glossary below!

We alphabetically organized this guide into four sections. You can jump through these sections via the Table of Contents. 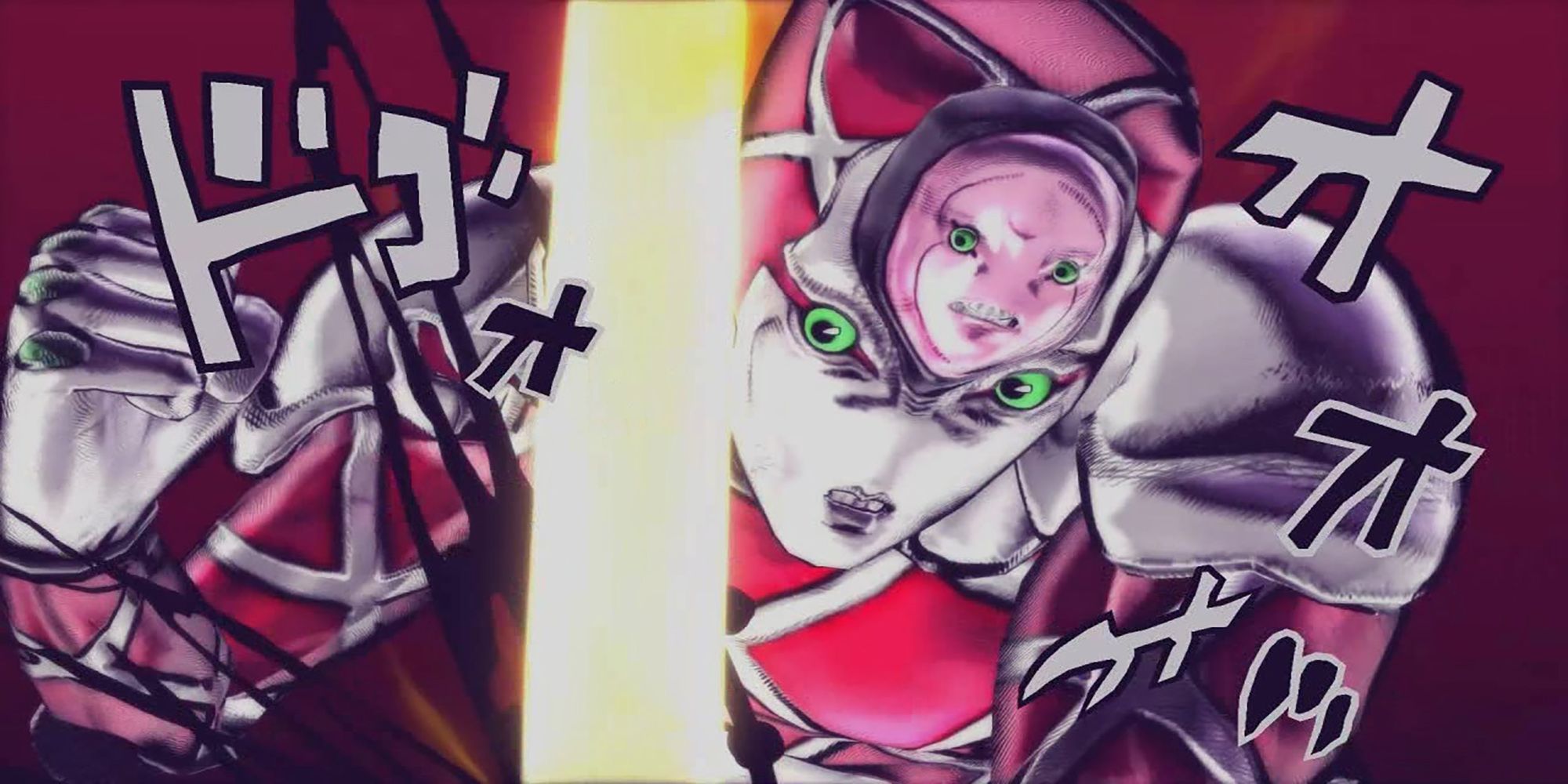 A gangster and user of the Stand, Zipper Man. He is gentle and loyal, which earns him the trust of the locals. He allows Giorno to join the gang. He's tasked with guarding the daughter of the boss, but ends up rebelling against him.

User of the Stand Green Tea. One of Diavolo's trump cards, he is a former doctor, and sybaritic killer who repulses even Diavolo. In Rome, he attacks Bucciarati's mob with Secco, but Giorno's "Useless, useless" barrage finishes him off.

User of the Stand Emperor Crimson, boss of the Passione mob, and a schizophrenic. He is fiercely proud, but also very guarded. He tries to wipe out his own daughter along with the Bucciarati mob, but suffers a never-ending death at the hand of Giorno.

Diavolo's Stand that can erase time and obliterate events that would have occured, leaving only the outcome intact. With Eulogy, the second face on its forehead can see into the future. Its physical attacks are incredibly powerful, too.

Pesci's Stand. A weapon in the form of a fishing rod. It can pass through walls and objects as if they were water to hook its prey. Pesci's determination increased the Stand's power dramatically.

User of the Stand Tiny Feet and one of La Squadra di Esecuzione. He dogs Narancia and subjects him to hideous torture, but is badly burned by Li'l Bomber's counterattack and dies in the ensuing close-range combat. 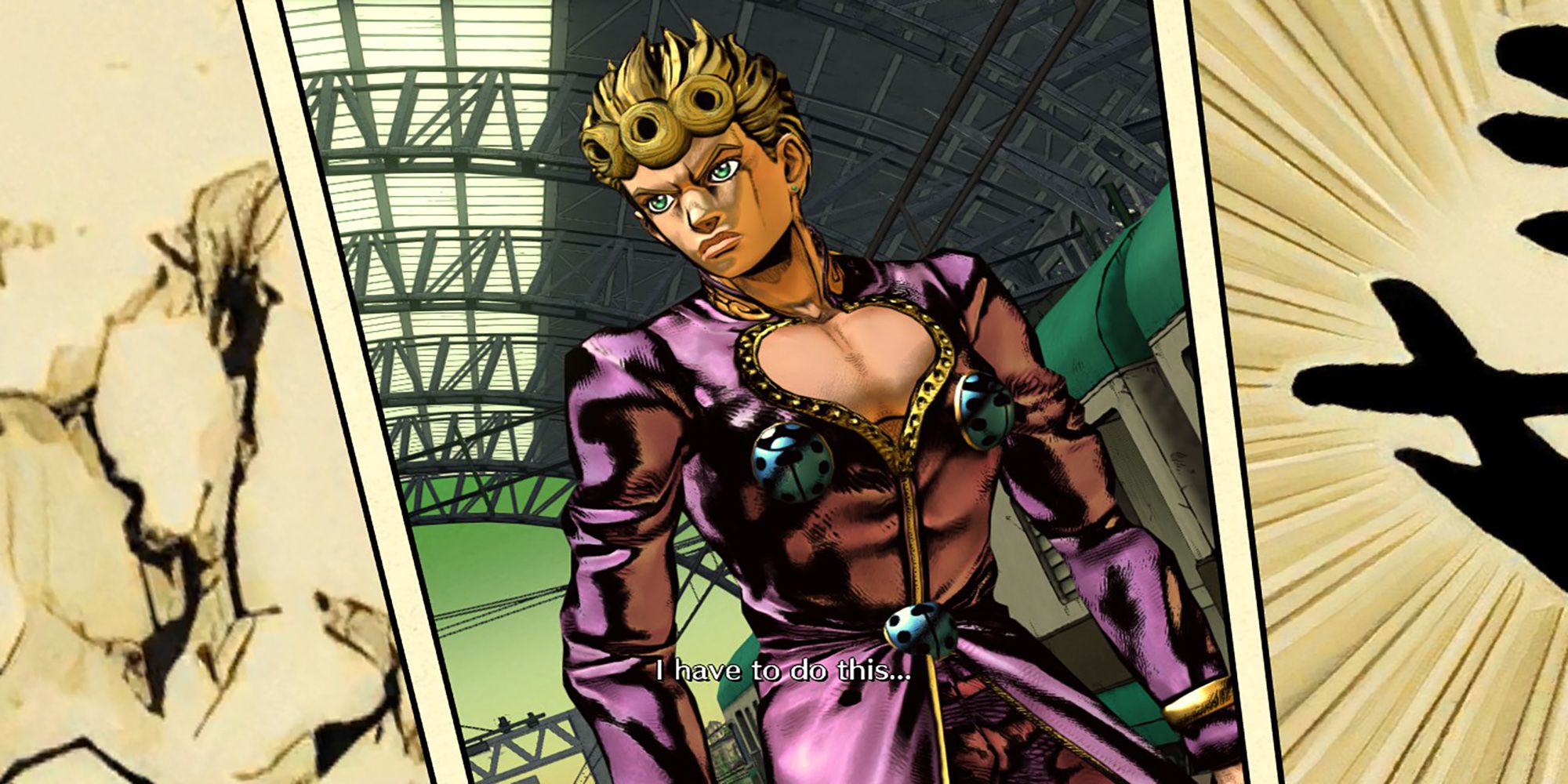 Stand: White Ice. A member of La Squadra di Esecuzione. Easily enraged, he is often angered by illogical idioms. He is defeated by Mista and finished off by Giorno after chasing them in their car.

The son of an unnamed Japanese woman and DIO, whose Stand is Golden Wind. His real name is Haruno Shiobana. He joins the Bucciarati mob to fulfill his dream of becoming a "gangstar," and eventually overthrows the boss, Diavolo.

Giorno Giovanna's Stand, able to give life to inanimate objects, turning them into animals or plants. It later becomes able to create organic matter, and eventually evolves into Golden Wind Requiem when it is pierced by the Arrow.

The "Requiem" form of Golden Wind, with the supreme ability to nullify all movement and thought. Even the state of death at the Stand's hand is nullified, such that the victim never attains "death," just endless dying.

Stand: Six Bullets. A member of Bucciarati's mob. He is an optimist with a simple outlook on life, but is obsessed with the idea that the number four is unlucky. After surviving the final battle, he becomes a Capo.

User of the Stand Moody Jazz, and a member of Bucciarati's mob. Formerly a police officer, corruption led him to change his "profession." He is killed by Diavolo in Sardinia, but succeeds in leaving behind a clue to the boss's identity.

Narancia's Stand. Shaped like a fighter plane, built to attack with machine guns and missiles. It is also equipped with a radar that's sensitive to carbon dioxide. 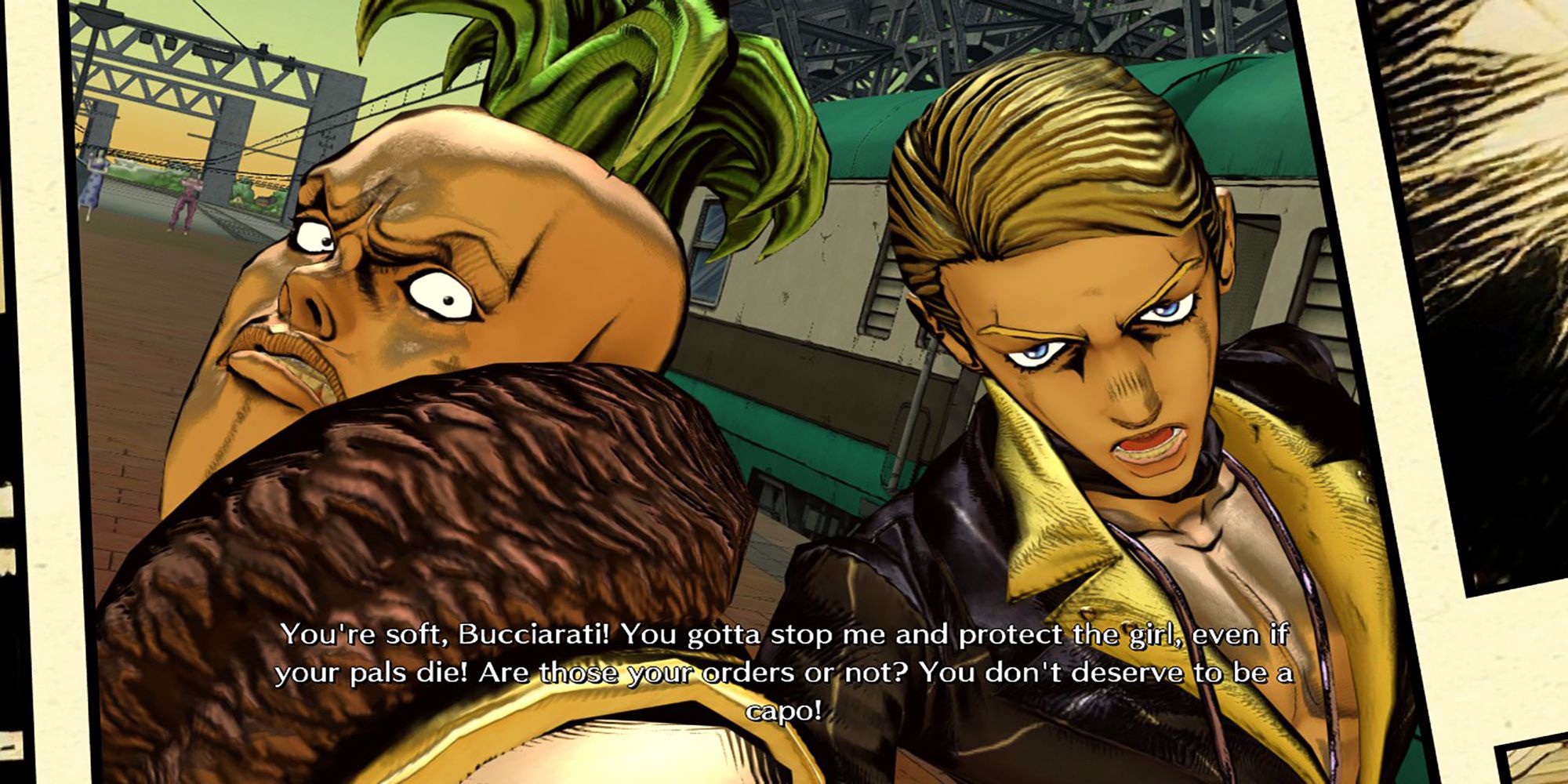 User of the Stand Babyhead and one of La Squadra di Esecuzione. Often heard saying "di molto." Though he manages to capture Trish, his Stand is crushed by Giorno, who had just awoken a new ability. He dies after being bitten by a snake.

Where the Bucciarati mob board the express train to Florence. They briefly manage to evade their pursuers thanks to a turtle with Stand powers dispatched by their boss.

User of the Stand Li'l Bomber, he is a little childish and naive, with an inferiority complex about his lack of education. He flies into a rage if teased about it. He is Diavolo's first victim in the final battle.

His Stand is Purple Smoke. He is a gentleman by nature, but violent when enraged. Unable to follow Bucciarati after he betrays the boss, he withdraws from the gang in San Giorgio Maggiore.

An Italian mafia gang of which Diavolo is the boss. Most of Naples, including hotels, the port, undertakers, construction and transport industries, and restaurants, are all under its control.

User of the Stand Fisher Man and one of La Squadra di Esecuzione. Just a young punk at first, he becomes a true gangster when he witnesses Prosciutto's resolve. He dies in the end in the battle with Bucciarati's mob.

User of the Stand Thankful Death, and one of La Squadra di Esecuzione. A hardened gangster who nevertheless treats Pesci like a younger brother, helping him to develop. He dies in the battle with Bucciarati's mob on the Florence Express.

Panacotta Fugo's Stand. Attacks by spreading homicidal viruses from six capsules on its fists. Causes victim to rot to death in thirty seconds. The Stand itself only exhibits Fugo's violent side, and is therefore none too bright.

The ancient capital of Italy where Bucciarati's mob arranges to rendezvous with Polnareff. The city is razed to the ground overnight by the indiscriminate attacks of Secco and Cioccolata's Stands as they pursue Bucciarati and gang. 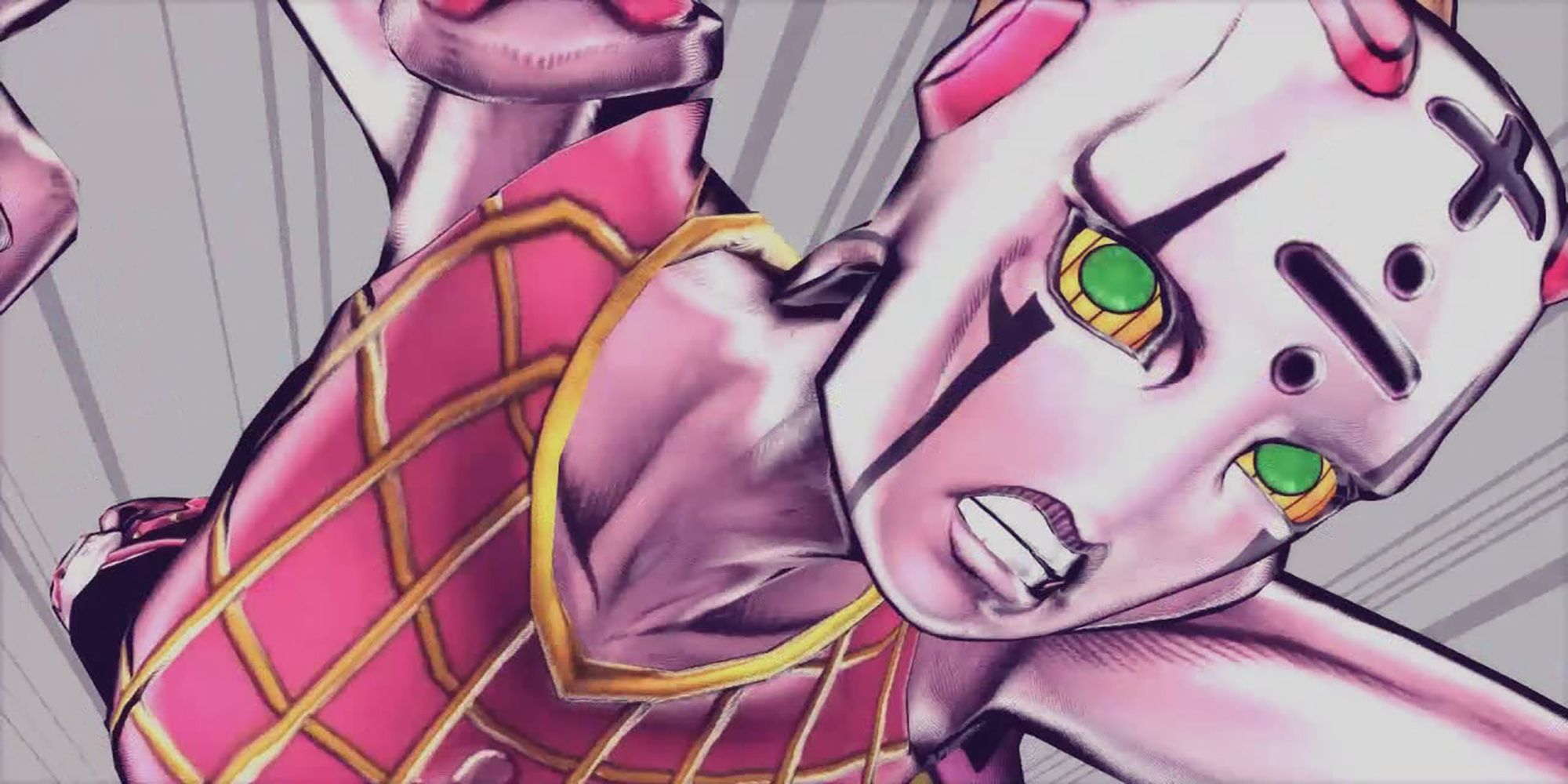 Stand: Arts And Crafts. Member of Passione. He plots to swipe Polpo's secret fortune, and ends up in a fierce fight with Mista on Capri Island. Mista struggles against his ability to control motion, but eventually wins.

User of the Stand Sanctuary, Secco is one of Cioccolata's former patients and Diavolo's trump card. After losing to the Bucciarati mob, he shows his true colors and goes utterly berserk before being wiped out by Bucciarati's zipper.

Guido Mista's Stand, consisting of six discrete bullet "beings" that can increase their power and control their trajectories at will. They are numbered from one to seven, skipping four, which Mista considers bad luck. Without food and rest, they get very grumpy.

Trish's Stand. Has the power to make objects soft. Once turned soft, the object cannot be destroyed. The Stand can converse with Trish. It's also a competent close-range power Stand with good, all-around capabilities.

Prosciutto's Stand. Causes all organisms' bodies and minds to age rapidly. The aging is fastest on direct contact with the victim. The user can also control his own age at will to trick enemies.

User of the Stand Spicy Lady. Diavolo is her true father, but he wants to kill her to keep that fact a secret. She is overweening at first, but develops emotionally with the Bucciarati mob, also awakening her Stand ability.

Ghiaccio's Stand. It can supercool the air to freeze moisture, forming an armor of ice around its user. The armor is so strong that not even bullets can pierce it.

Bruno Bucciarati's Stand. It attaches a zipper to whatever it hits that can open and close the object in question. It can create an alternative space within the zipper, and has a multitude of applications, especially with its long range.