There are a total of ten perks offered in Killing Floor 2: each with its own strengths and weaknesses. This would be dependent on the player and their preferences in terms of their playing styles. This can also differ based on whether you are playing in multiplayer or single mode.

Furthermore, each perk is accompanied by skills that can enhance your character’s abilities. And you can level up your perks based on how well you perform during campaigns. Below we will provide a list of the five best perks for multiplayer modes in terms of consistency, durability, and team support. 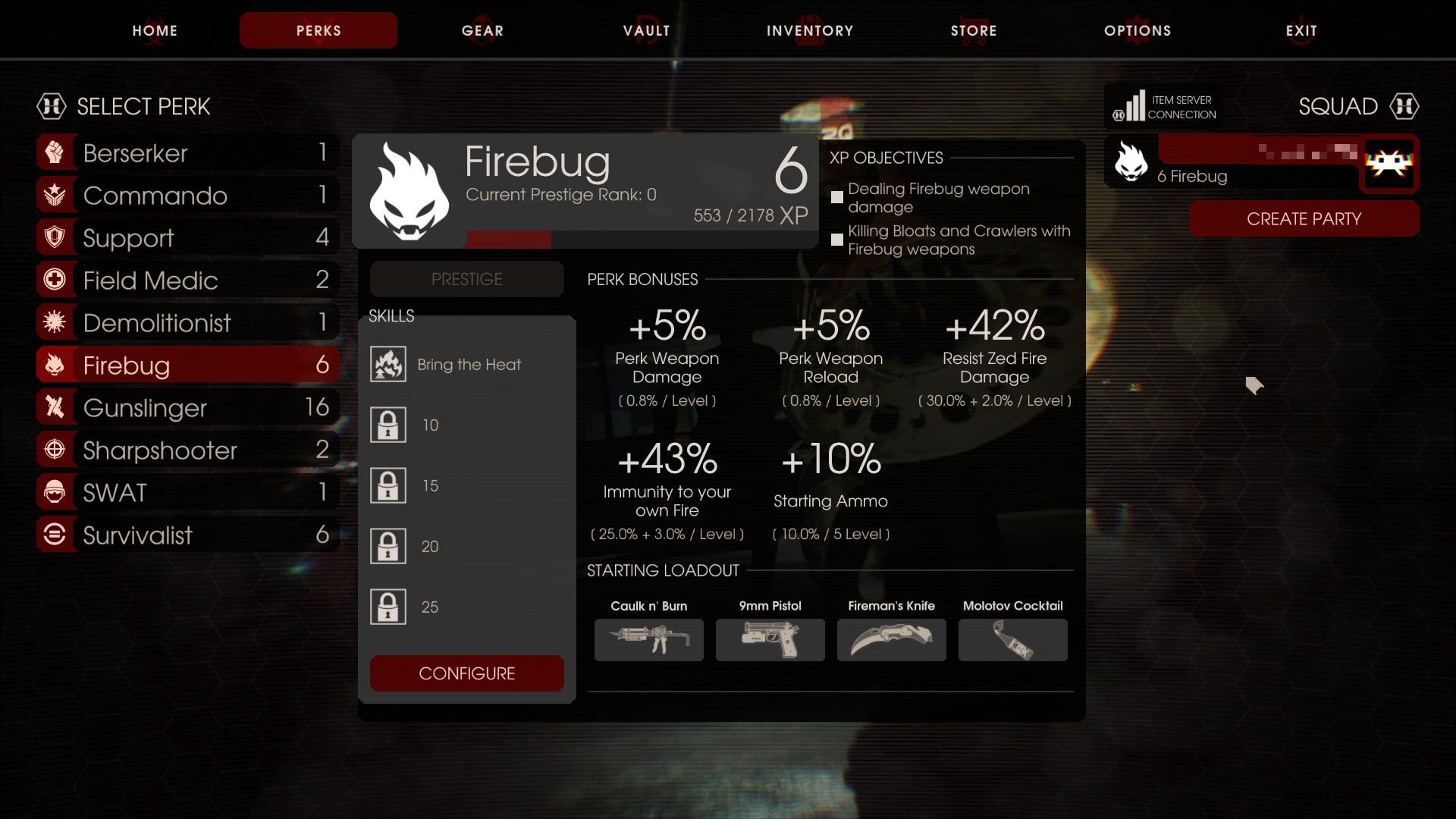 This is a team-orientated perk with no direct killing power due to the weapon type provided to you. However, it is good for crowd control as the perk comes with flamethrower-type weapons. This is useful for holding off larger hordes of zeds in smaller spaces such as doorways and hallways. It can also cause a lot of damage to Crawlers, Bloats, and other smaller zeds with the Caulk n’ Burn weapon.

The Bring the Heat skill can increase the damage caused by your fire weapons by 35 percent. And, if used in conjunction with the Napalm skill, you are also able to increase the length of the fire damage caused to zeds. And, even though this perk is better for killing smaller zeds, once you have reached level 25, you would be able to do serious damage to bigger zeds in boss battles.

A downside to this perk is the possibility of disruption within your team. You are better served flanking your team, especially when taking on a Boss Z. Shooting fire during a boss fight can cause the bigger zeds to panic while on fire, but not cause them much damage. This can make it more difficult for your team to take it down and can cause a complete wipeout. 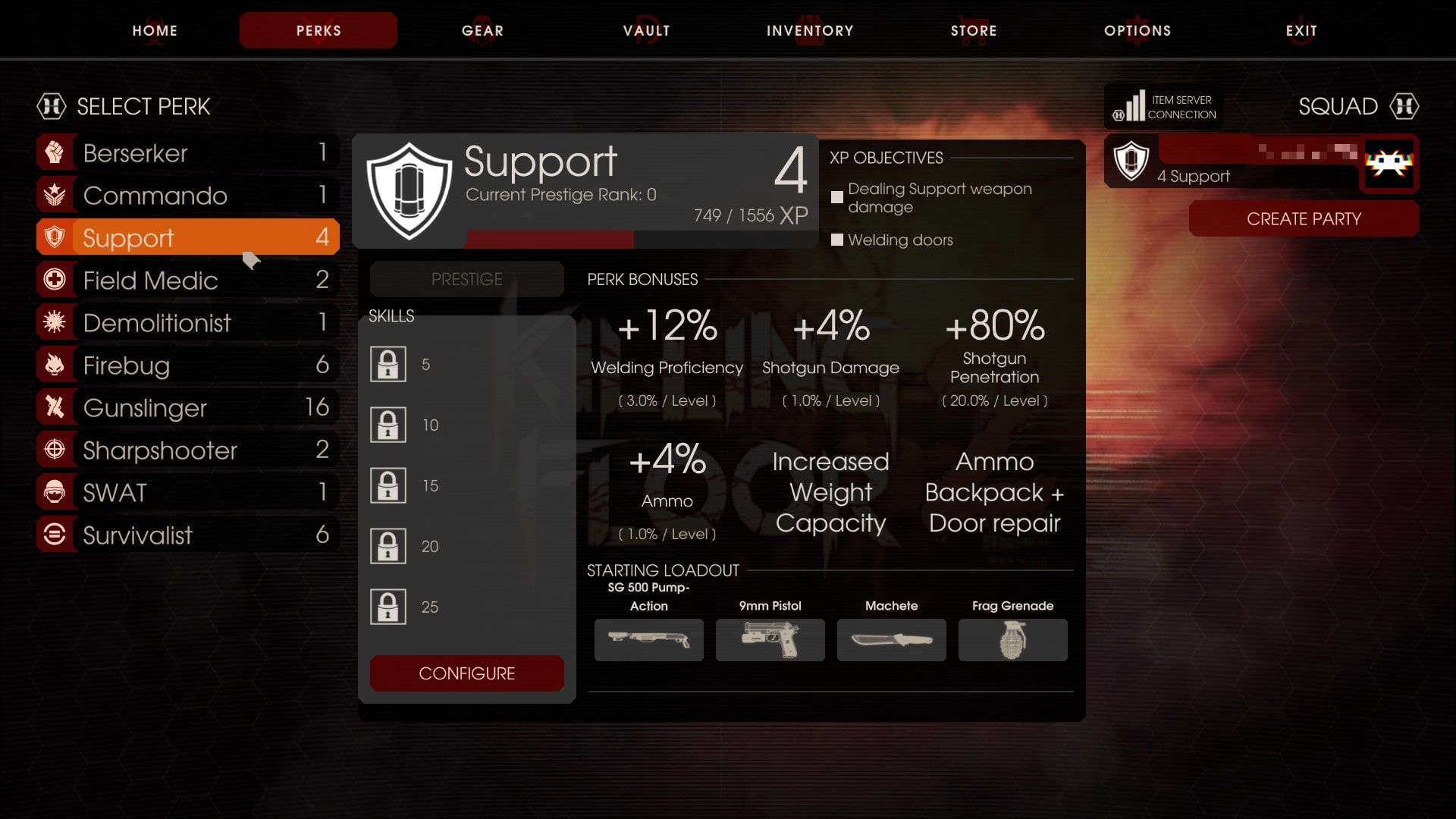 The Support perk is best served to assist your team by taking out smaller zeds and providing ammo mid-game when they interact with you. This perk comes with shotguns that are useful for taking down bigger zeds and sirens. The weapons can cause a good amount of damage but have a minimum distance from which they can be fired due to traveling time.

While this is useful when attempting to cause damage to bigger zeds, it is riskier in higher difficulty levels and can get you killed. Furthermore, you can weld doors better than other perks and this puts the safety of your teammates in your hands, making your role very important. When using this perk, you would need very good on-the-spot decision-making abilities.

Unlocking the Fortitude skill can increase your health by 50 percent. Furthermore, using Support weapons even when you are not using the Support perk will allow for it to level up. 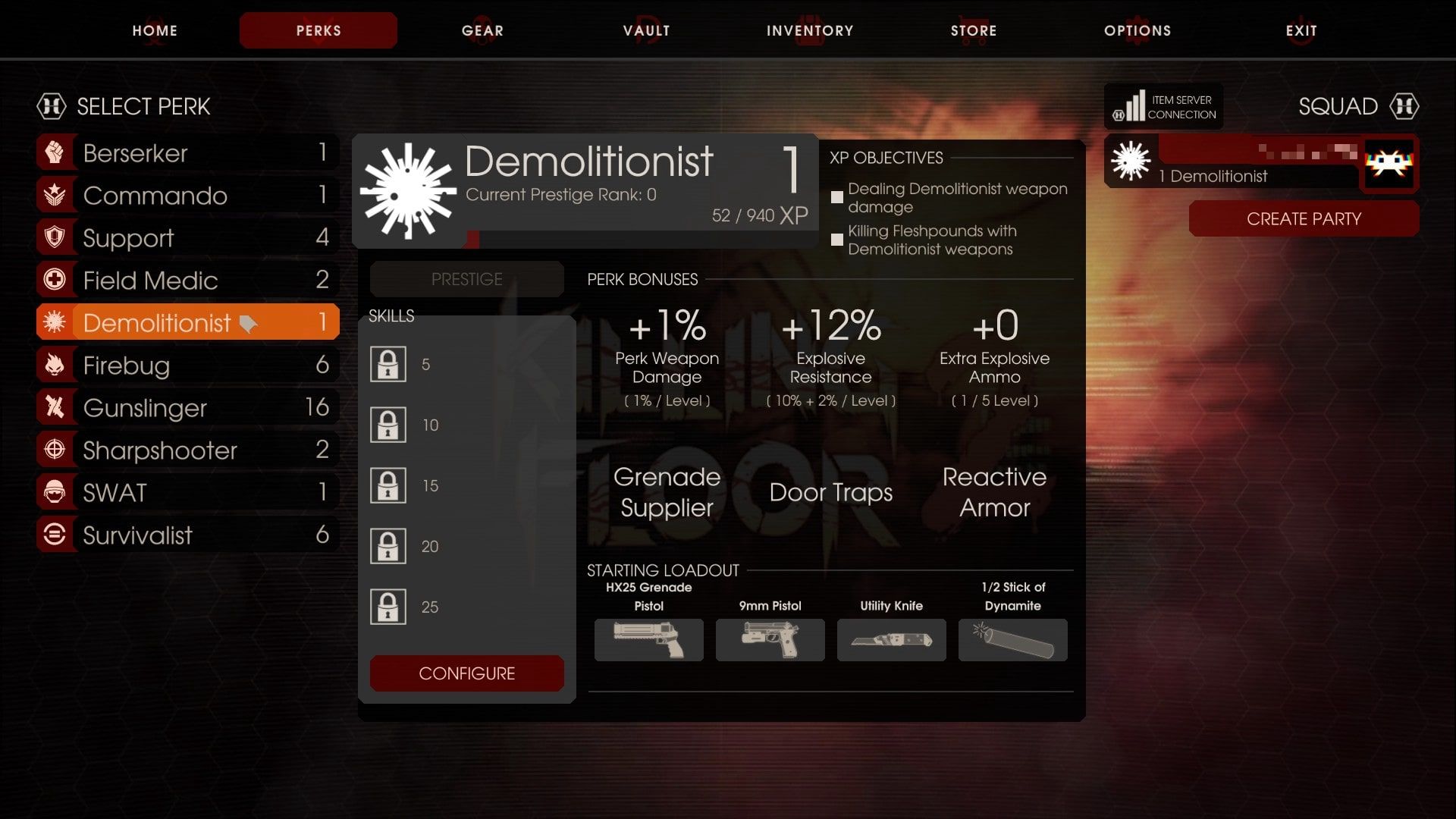 This team-orientated perk is much more appropriate for taking down bigger zeds. Unlike the Field Medic and Support perks, this would allow you more interactive gameplay while still being able to assist your team. This perk provides your teammates with a free grenade in every round, which in turn allows more utilities to be used.

You are provided with explosive weapons that can deal a lot of damage, such as an automatic assault rifle and multiple grenade launchers (which can be good for headshots with bigger zeds). In addition, you can hold onto a smaller weapon to take out smaller zeds.

You have reactive armor, which, if enough damage is taken, causes a huge explosion that is fatal to surrounding zeds. This can only be used once per wave and, although useful, will cause damage to your character over time. Lastly, you can set welding traps in which you weld a door shut, turning it orange and having it explode, killing any zeds outside or near the door.

Once you reach level ten, you unlock the High Impact Rounds skill, which provides a 25 percent increase in the damage caused by direct hits from explosive weapons. 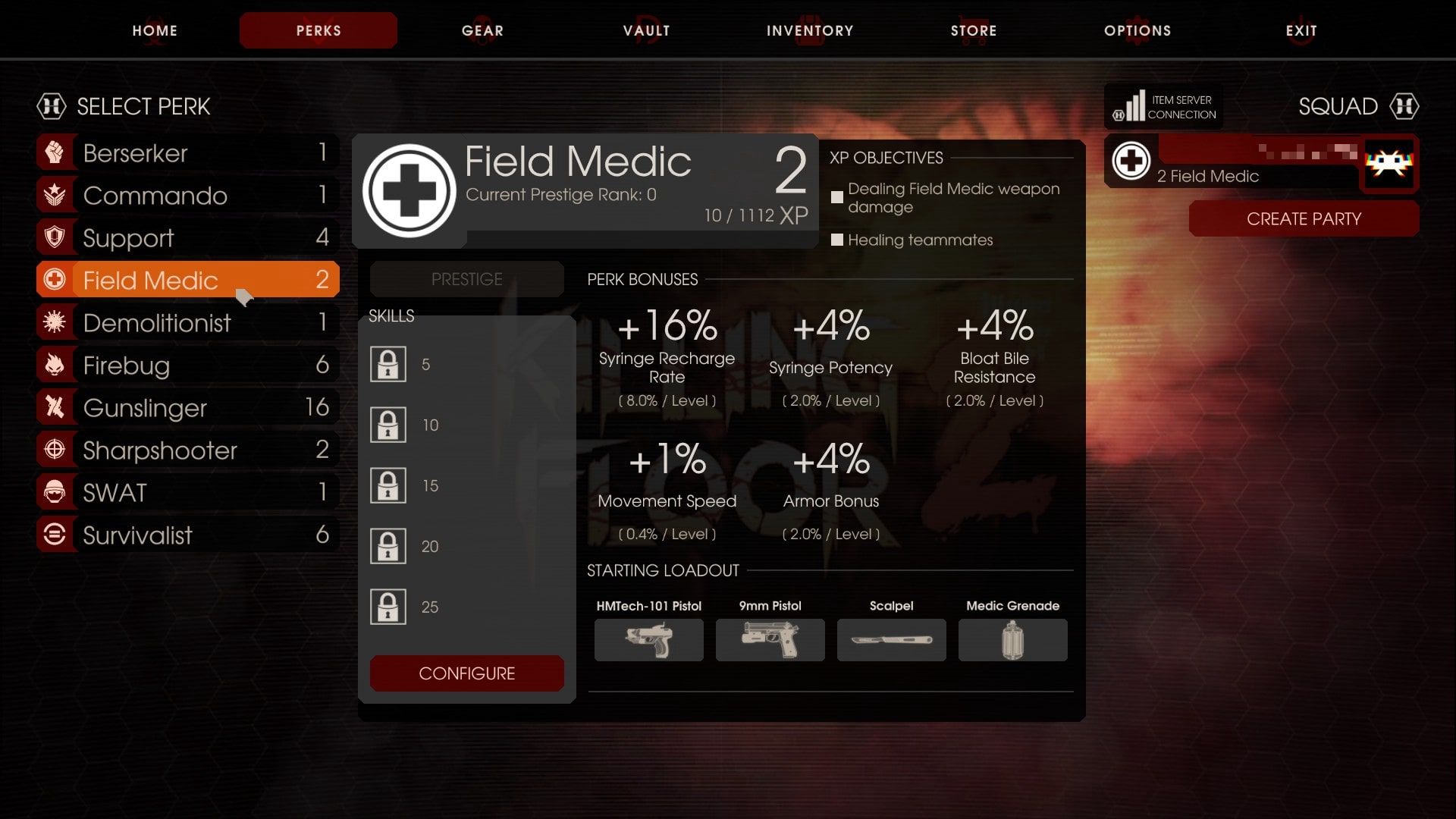 The Field Medic perk is most useful when playing in survival mode but is an overall useful and fun perk if you prefer to assist your team rather than kill zeds. In your team, your role as field medic is very important as you will assist in healing your team. This means that your life is the most valuable, and your team will try their best to keep you safe. Keep in mind that this perk is hardly useful for killing zeds.

Each weapon you have access to besides the grenade rifle has an alternative firing mode that will allow you to fire healing darts at your teammates. Regardless of whether you have a direct aim, the dart will lock on and hit them automatically. The darts can change direction mid-shot and hit obstacles and/or zeds that might be in the way.

Be sure to have a clear view of the player you are trying to heal.

You are also provided with a medic grenade that will detonate within half a second after throwing it. The grenade emits a cloud of blue gas that is toxic to zeds and will kill any within the cloud. However, any of your injured teammates within range will be healed.

If you are unable to/not needed to heal your teammates, then you can help clear out smaller zeds. Once you level up enough, you will become more capable of killing zeds and protecting yourself. Level 15 will unlock the Acidic Rounds skill, which will allow your perk weapons to issue poison to zeds that will cause damage over time and weaken them. 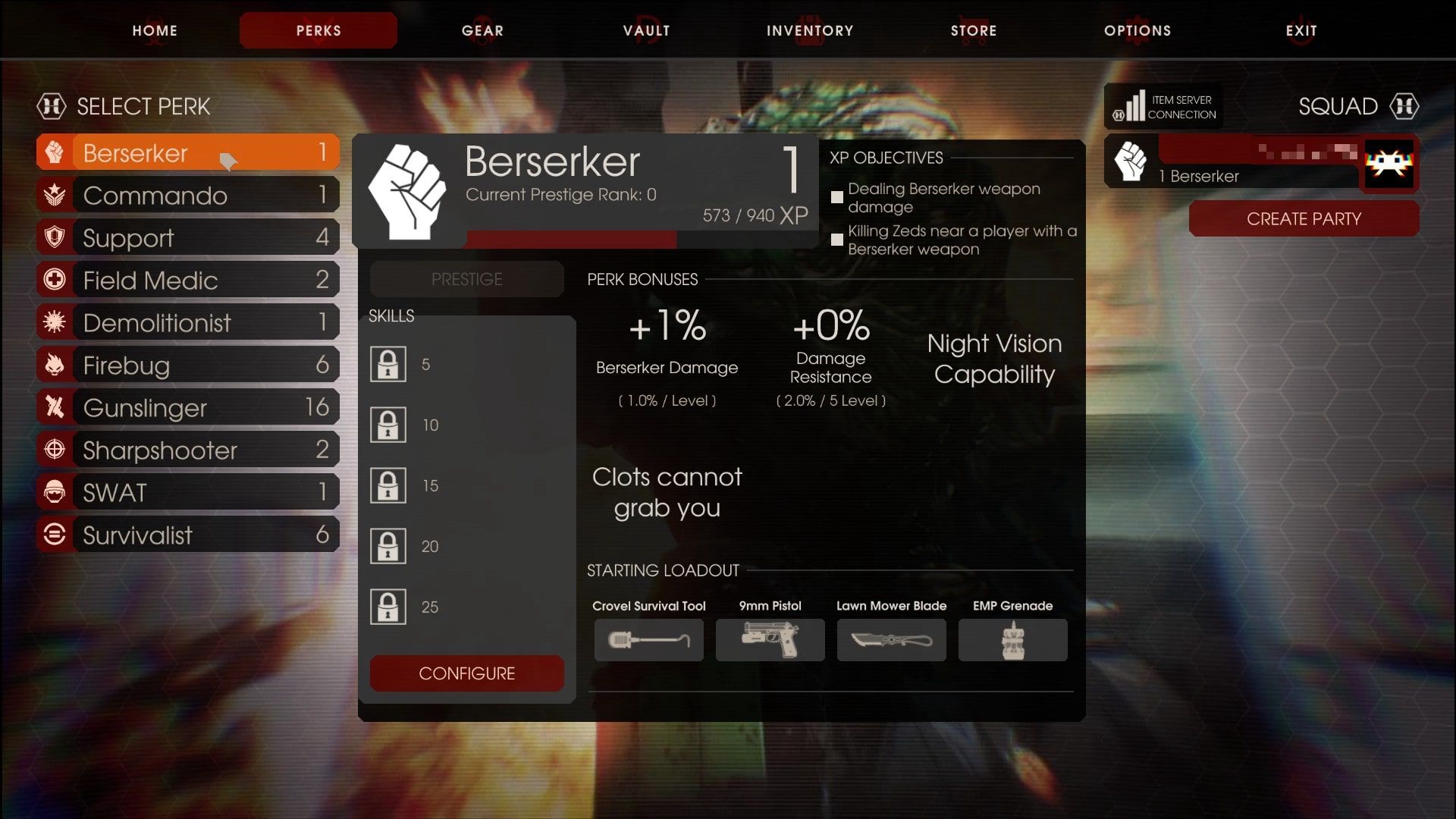 The Berserker perk is mainly good for handling bigger games, as the weapons provided deal a lot of damage. This perk is perfect for you if you enjoy fighting with melee weapons. A bonus is your ability to generate more health while using melee attacks to take down zeds.

You are provided with the Crovel Survival Tool and a Lawn Mower Blade. These weapons are useful in close-range combat and can cause copious amounts of damage to zeds. Furthermore, Clots are unable to grab you when using the Berserker perk.

This is a tank perk that offers high damage resistance, making it perfect for handling big zeds. You can keep Boss Z’s busy by parrying them and allowing your team members a more relaxed opportunity to attack and possibly them down.

Unlocking the Butcher skill will allow you to increase the amount of damage caused by the Lawn Mower Blade. The Berserker perk generally offers great mobility and speed. However, once you reach level five, you will unlock the Skirmisher skill.