Of all the Limit Cut bosses in Kingdom Hearts III Re:Mind, it’s possible that Dark Riku is the easiest to brute force your way through. That’s not to say you don’t need to practice and be aware of his move set, though. In fact, not respecting Dark Riku’s powerful attacks and power-ups is a sure-fire way to get combo’d to death in an instant.

If you’ve already faced off against Young Xehanort, you should have a decent foundation for the kind of quick reflexes and responsive attacks you’ll need in order to best Dark Riku. If you’re still having trouble beating the saddest clone, then take a look at the move set and strategy contained in this guide.

You’re not going to be able to slide right into Limit Cut after finishing the story without some grinding. I finished both the base game and Re:Mind at around level 45 and was getting absolutely housed by the Limit Cut bosses on Proud Mode. While there are those who manage to pull of level one crit runs with one hand behind their back, the rest of us need to be prepared.

The first step is getting the right Keyblade. Assuming you haven’t gone through the process of getting the Ultima Weapon, your options are either Oathkeeper on Normal/Proud or Oblivion on Critical. All you need to do to get Oathkeeper is find all 90 of the Lucky Emblems scattered around the worlds. As for Oblivion, simply complete the game on Critical. 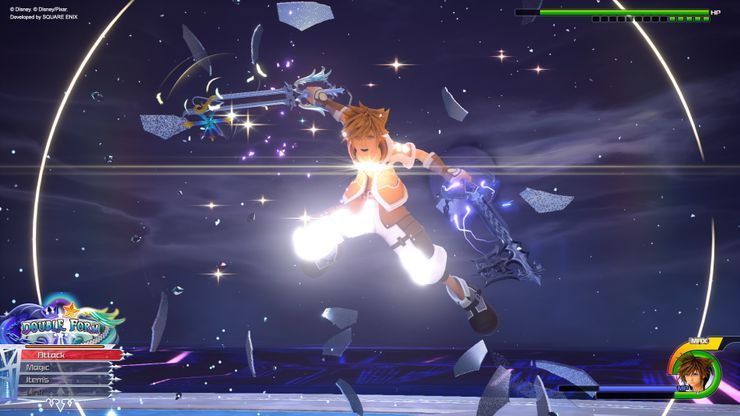 Once you’ve leveled the Oathkeeper up all the way, I recommend using the Royal Ribbon and 2 Cosmic Belt+. These three items will give you the highest defense and resistance combo possible.

As for accessories, I like to use the Crystal Regalia from the Dark Inferno secret boss and the Mickey Clasp, again from the 90 Lucky Emblems, for the fastest MP regeneration. The third slot is more open to preference, and Orichalcum Ring, Flanniversary Badge, and Celestriad are all good choices.

After that just make sure you have a Kupo Coin, lots of Hi-Potions and Hi-Ethers (or Elixirs if you’re boujee), and eat a high HP/defense meal.

Teleport Attack – Dark Riku will teleport left, right, and above you in quick succession and deal heavy hits. Often, he will teleport off-screen so anytime you can’t seem him it’s best to block. If you get hit by any of the dashes in this combo he’s going to hit you with all of them, so make sure you’re blocking these.

Shockwave Attack (Small) – These creeping ground shockwaves are pretty easy to dodge. If you’re close enough, you can dodge straight towards Dark Riku and attack him from behind. If you’re in the air though, you’re going to have a bad time.

Shockwave Attack (Large) – These are five wave attacks that he’ll fire at you twice in a row. Best case scenario is that you’re perfectly squared up with him when he attacks. You’ll be safe in the center for the first, then for the second ,roll forward and slightly to right, and you should end your roll safely right on top of him.

Totems – The totems he summons will hurt and stun you if you touch them. They’re easy to dodge around or jump over, and you can even attack them. Just don’t let him corner you into a group of them or he’ll take the opportunity to destroy you.

Dark Cage – This one is just all about timing. You’ll see a black circle under your feet and, at the last second, you need to dodge it or you’ll get caged and damaged. It takes a little practice, but it’s very easy to avoid.

Dark Riku Unstoppable – During his enraged state, Dark Riku will dash all around, attacking you constantly. You need to block and dodge his teleport attacks as well as a couple of new attacks:

Slam – He’ll do a slam attack with a big AOE circle, just get away from him.

When he’s teleporting around, you can block and counter pretty easily. I recommend you use the counter kick to close the gap when he teleports away. If you catch him in the counter, just keep unloading until he blocks. I like to throw in a spell like Firaga to help me get to my second form quicker and eventually dual-wield, which allows you to do the most damage.

When the circle barrier goes up, you’re done. If you continue to attack, he’ll do a slam attack and really mess you up, so just roll away and wait to counter his next attack. If he moves into shockwaves, it’s important to stay on the ground and try to keep rolling towards him. If you can get yourself in the right position, you can start a combo on him again.

When he announces he’s unstoppable, all I can say is good luck bud. Remember not to heal until he puts you to 1. All his combos are so fast that you don’t need to worry about getting knocked out as long as you have the leaf bracer on. Hopefully, you can hang onto your Kupo Coin for one of these unstoppable torrents because there’s really not much you can do here.

If the totems separate you, don’t worry about chasing. I like to throw a Firaga or Thundaga at him, which almost always makes him teleport at me. Block, counter, and unleash those combos.

Don’t Rage Form here unless it’s absolutely a win or lose scenario. I found that panic Rage Forming put me at a disadvantage more often than not because Rage Form is so bad at blocking.

Ultimately, if you can dodge the red lightning, dark cage, shockwaves, and totems, this fight shouldn’t be too big of a deal. It’s chaotic to be sure, but once you get an opening on Dark Riku, you can just wail on him for a couple of health bars — or more, if you’ve got your dual-wielding queued up.