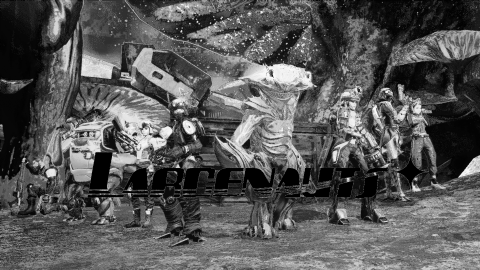 Impulse Gear’s new hero shooter has the potential to be huge, but it still has some quirks to iron out. More in our Larcenauts review-in-progress.

Note: We’ve only had limited time with Larcenauts in controlled, pre-launch conditions and with bots so far. As such, we’re posting an unscored review-in-progress of the game that we’ll turn into a full, fleshed out review with a final ranking later down the line.

If one thing’s clear from even just a few hours with Larcenauts, it’s that the game has genuine depth. It’s the sort of texture, in fact, that we haven’t really seen done well in VR yet – Onward covers mil sims, Popultation: One has the Fortnite angle, and you can take your pick of arena shooters, but Larcenauts delivers the class-based, team-driven gameplay that’s been missing from that line-up. And it does it quite well, too.

There’s early cause for cautious optimism, then. I hope — in fact I suspect — we’re not talking about yet another multiplayer VR shooter that’s doomed to empty lobbies and abandoned roadmaps three to six months down the line. Larcenauts does seem like it’ll have the legs so many of its contemporaries didn’t.

For now, there’s a lot to like. Larcenauts arrives with eight classes or “specialists” that both wildly vary in capabilities and complement the team-based play. An all-rounder character like Calmia, for example, features nimble, accessible weapons like an SMG and shotgun, plus a dash that makes her great for sprinting to capture zones or seizing the ‘flag’ in Drone Hack. But without the extra support of a class like Thal, a guardian-type that can lay down suppressing fire and throw up shields or Evander, a sniper that provides expert cover fire under stealth, she’ll be left exposed.

Learning the intricacies of each character class — a combination of unique guns, grenades, secondary fire types and the crucial ability types — is going to take a long time and, smartly, Impulse Gear staggers its introductions with unlocks and a leveling system. Some classes are definitely more approachable and some have really smart twists on conventional character types. I love, for example, Evander’s ability to lay cloaked bear traps behind him as he settles into a sniper’s nest. Meanwhile the medic class, named Chi, has such a powerful healing beam that taking them out becomes a top priority in any battle.

Already, you can see how plans might start to layer into the gameplay. Need to make up ground in Team Deathmatch? Why not send your heavy hitters out to the front lines, backed up by a medic or two who, in turn, can be protected by Thal’s shields. I’m really looking forward to seeing what other types of strategies are possible as I dig into the classes I’m yet to unlock. Progression, thus far, seems to be pretty pacey; the game strikes a good balance between giving you a new character and using class-specific levelling and customization to keep you coming back to the other types, including assigning Power Slates that offer small but important buffs for your prefered playstyle.

Some class types do seem a little stronger than others at this early stage. Going face-to-face with the grenadier’s fast-firing explosives is a death sentence, while others have little issues, like how hard it is to pick up the red dot in the scope of Evander’s rifle, but I’d expect these things to get balanced out pretty quickly.

What it doesn’t especially feel like right now is a uniquely ‘VR’ game. Larcenauts doesn’t have the physicality of Onward, for example; lots of its interactions are assigned to button presses (more on that in a bit). A flatscreen version of the game seems like it’d be entirely possible but, having said that, it still manages to be immersive and engaging thanks to the potential of its systems and how tight its design is, from the diverse maps that have a way of keeping you locked in combat to the satisfaction of holding down the trigger on Thal’s meaty LMG. I will be interested, though, to see if that changes with high-level play, and how experts start to use VR to play the game in different ways.

So, what’s ‘wrong’ with Larcenauts right now? For that, you can point to the game’s immediate roadmap.

What’s notable here is that that the game’s first additions aren’t new maps and modes but instead features that you might’ve hoped were actually already in at launch. One of them, Immersive Sprint, I’ve actually had an early look at (it’ll be coming to the public build very soon). It works by having characters hot foot it when they’ve got their gun lowered. It’s a far more preferable alternative to the default option, which takes your weapon away and dangles two hands doing a running motion at the bottom of the screen as you sprint. Other additions like the Manual Reload, which will hopefully offer a better solution than the current canned animation after a button press, can’t get here soon enough.

It is, at the very least, reassuring to see updates like this already being addressed. I’d also like to see the game’s lacklustre bots get an overhaul so they’re no longer running into walls.

Some of the game’s UI is in need of a tune-up, too. In the hub area, for example, it took me multiple sessions before I realized that highlighting a specific character ability with my virtual pointer would actually explain what that ability is and what it does… if I turned my head to the right and looked under the character model. It’s completely out of view otherwise. It’s also hard to tell when ability cooldowns are finished.

It’s also worth mentioning that Larcenauts is definitely on the intense side of VR experiences, with a lot to remember in its control scheme. If Impulse Gear’s Farpoint was as considerate to VR newcomers as it gets, this is at the other end of the spectrum: fast sprinting, vaulting to great heights with a hookshot, quick turns, this has the lot. There are comfort options and, for the hardcore fanbase the team is pursuing, that likely won’t be a problem, but keep it in mind if you don’t think you’re one of those people.

Overall, though? It’s a strong start for this new contender. Check back later on for our full Larcenauts review once we’ve had enough time to play other classes and really get to know the game.