The Elise, Gwen, and Katarina deck has become a potent force in Legends of Runeterra. Comprised of cards from the Shadow Isles and Noxus, this flexible deck can change its win condition at a moment's notice, and excels at reacting to its enemy’s strategy. While running three champions in a deck is usually a risk, this particular deck makes it one of its greatest strengths.

There are some variants of this deck, as is the case with any deck in Legends of Runeterra. Some cards are swapped in and out to adapt to the deck’s strengths and weaknesses. However, there are a couple of powerful variants that will be specifically addressed in this article, them being Gwen-Elise and Gwen-Katarina, so let’s get right into it. 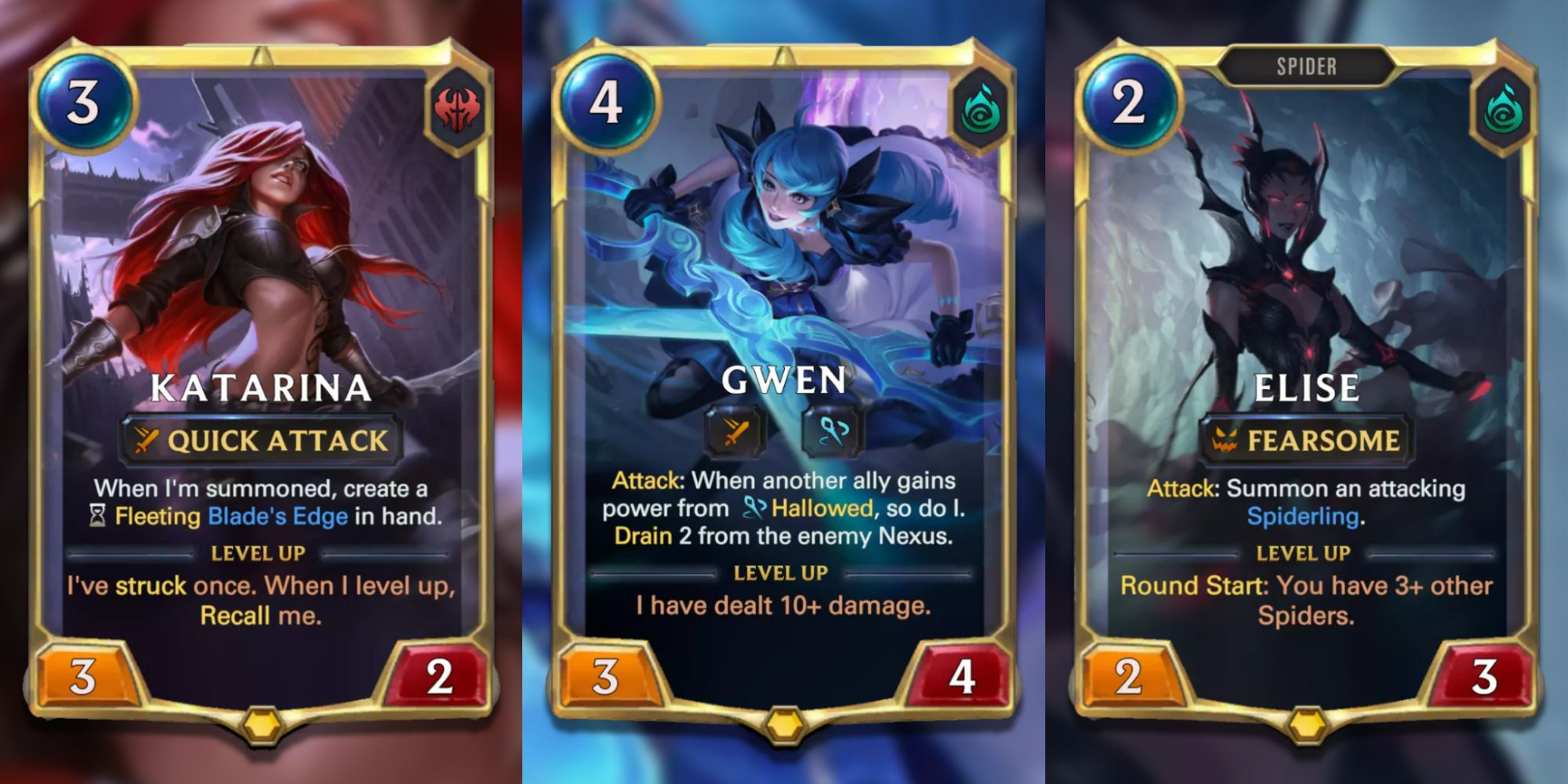 With three champions in this deck, it’s important to discuss how many of which champions you want. It’s important to have three Gwens, as she is the strongest of the bunch. From here, should you include two Katarinas or two Elises?

This can go either way, but the better option would be two Katarinas, due to the Rally she provides. That, coupled with your stacking Hallowed buff, makes her a force to be reckoned with, and one that will need to get blocked.

In this deck, Elise is used more as a distraction to take your opponent’s eyes off the true carries: Katarina and Gwen. The long and short of it is that Katarina enables Gwen more than Elise, all the while being a win condition herself. There also aren’t too many spiders in the deck to enable Elise effectively. 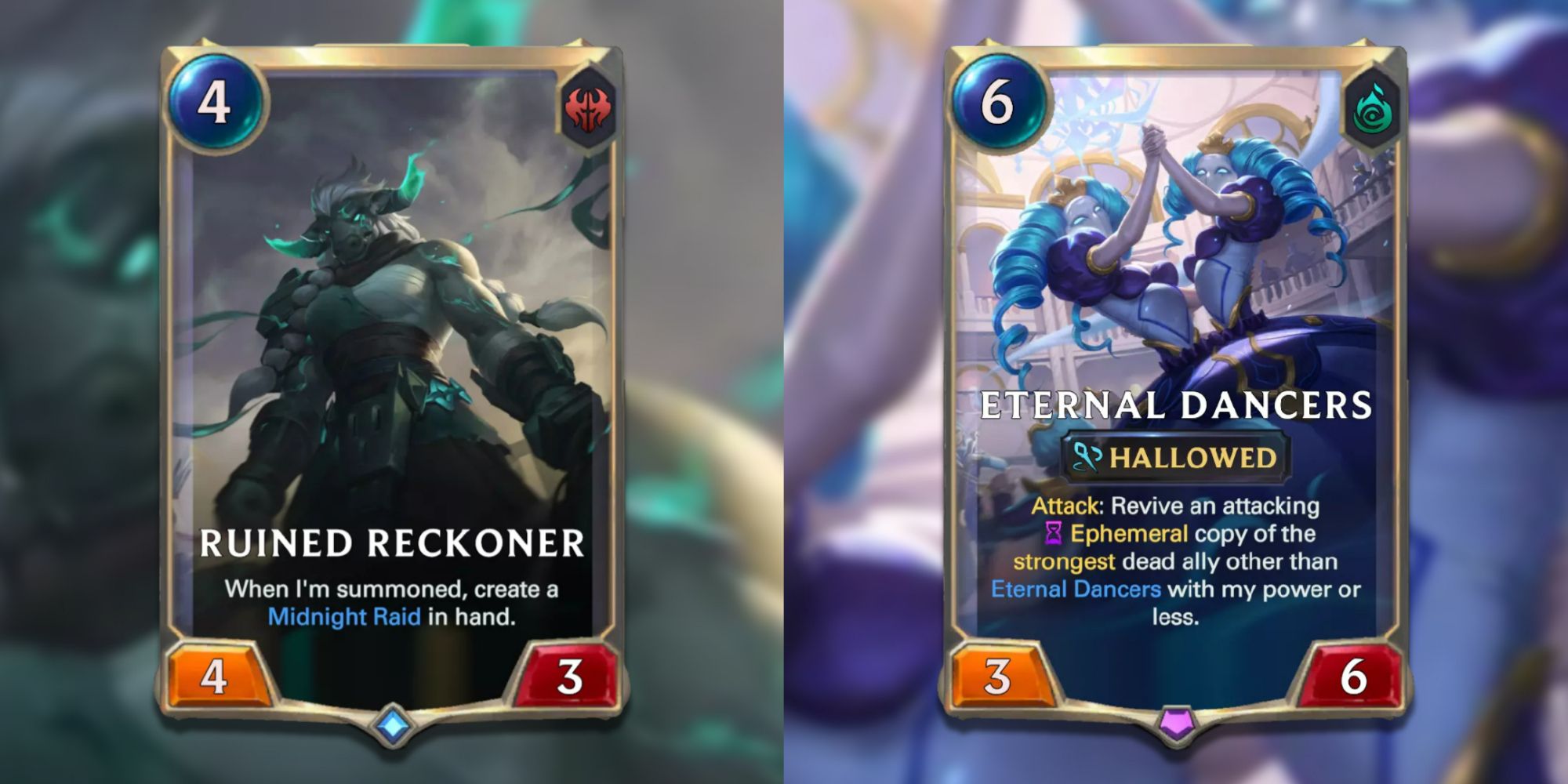 Generally speaking, this deck aims to pressure your opponent in the early and mid-game. Which phase of the game you pressure them more depends on how you mulligan and draw throughout the early phase of the game. While any of the three champions can become win conditions — Elise less so, as this deck is better with two Katarinas and one Elise — Fallen Reckoner can easily become a win condition. If you’ve stacked up your Hallowed buff enough, its Overwhelm will allow it to hit your opponent’s Nexus pretty hard.

That said, your Ruined Reckoner will be able to enable Gwen very well with the free attack it provides with its Midnight Raid. This doesn’t mean you should only use Midnight Raid to give Gwen a free attack, as using it on your Eternal Dancers can provide even more value and is even a win condition in itself.

Either way, if all else fails and you can’t pressure your opponent enough in the early and mid-game, The Harrowing has the potential to close out the game for you before your opponent can get their late game rolling. However, if the late game comes around, this deck falls a bit short. 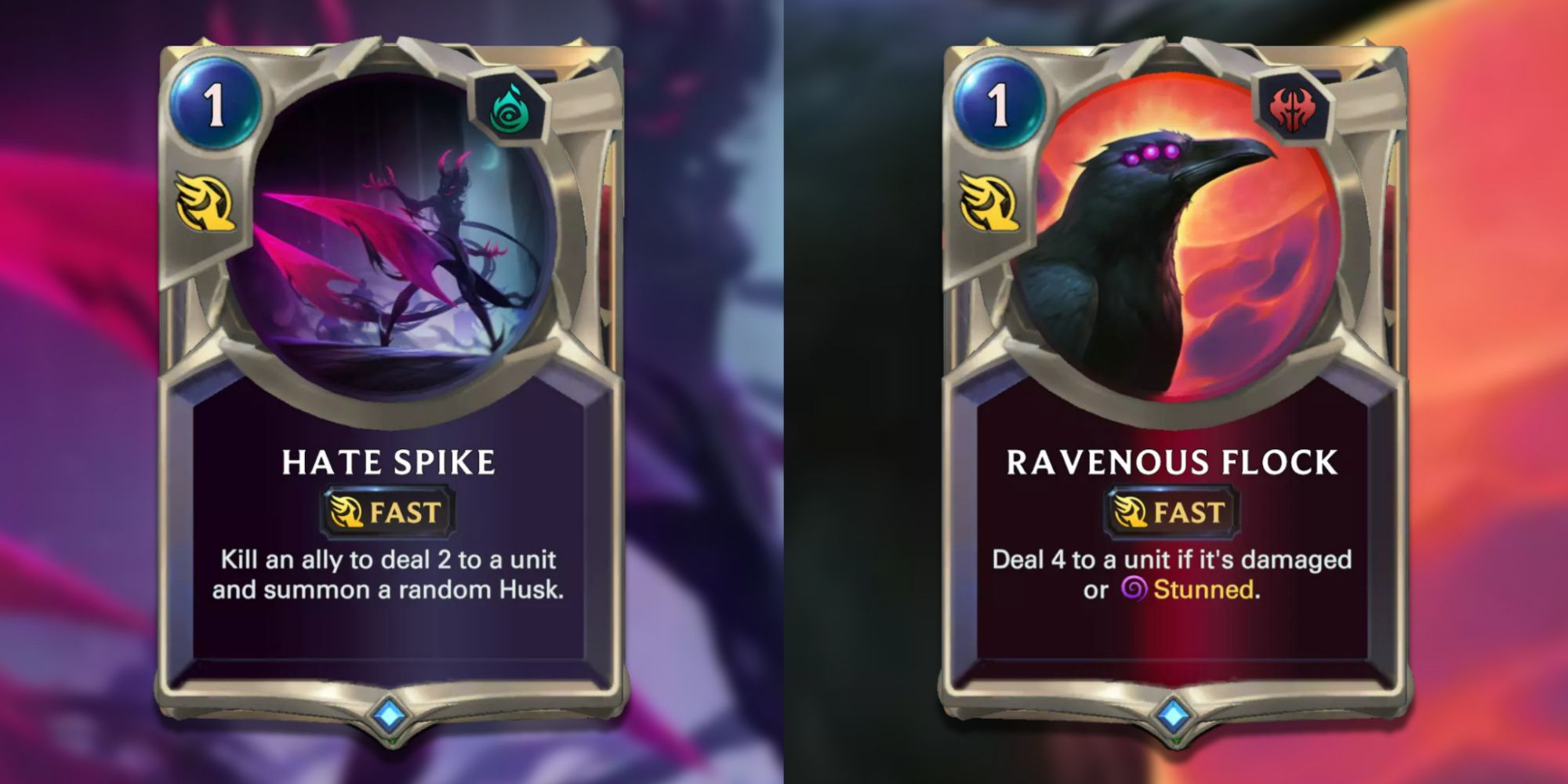 As always, the mulligan you want depends on what deck you're going up against, but typically, you want to mulligan a perfect or near-perfect curve. This doesn’t necessarily mean you always want a one, two, three, and four-drop minion (Gwen is great to have in your starting hand), but there are some spells you want to look out for as well.

Hate Spike and Ravenous Flock are great spells to mulligan, but as a rule of thumb, you don’t want to mulligan more than two spells. After all, the main goal of this deck, as mentioned, is to pressure your opponent early, so you want to be playing minions as soon as you can to get rolling early.

You want your opponent to waste spells on clearing your minions, especially those with Hallowed, to reduce the likelihood of them responding to Katarina or Gwen. Furthermore, feel free to efficiently trade away your Hallowed minions to get the buff stacking as well. 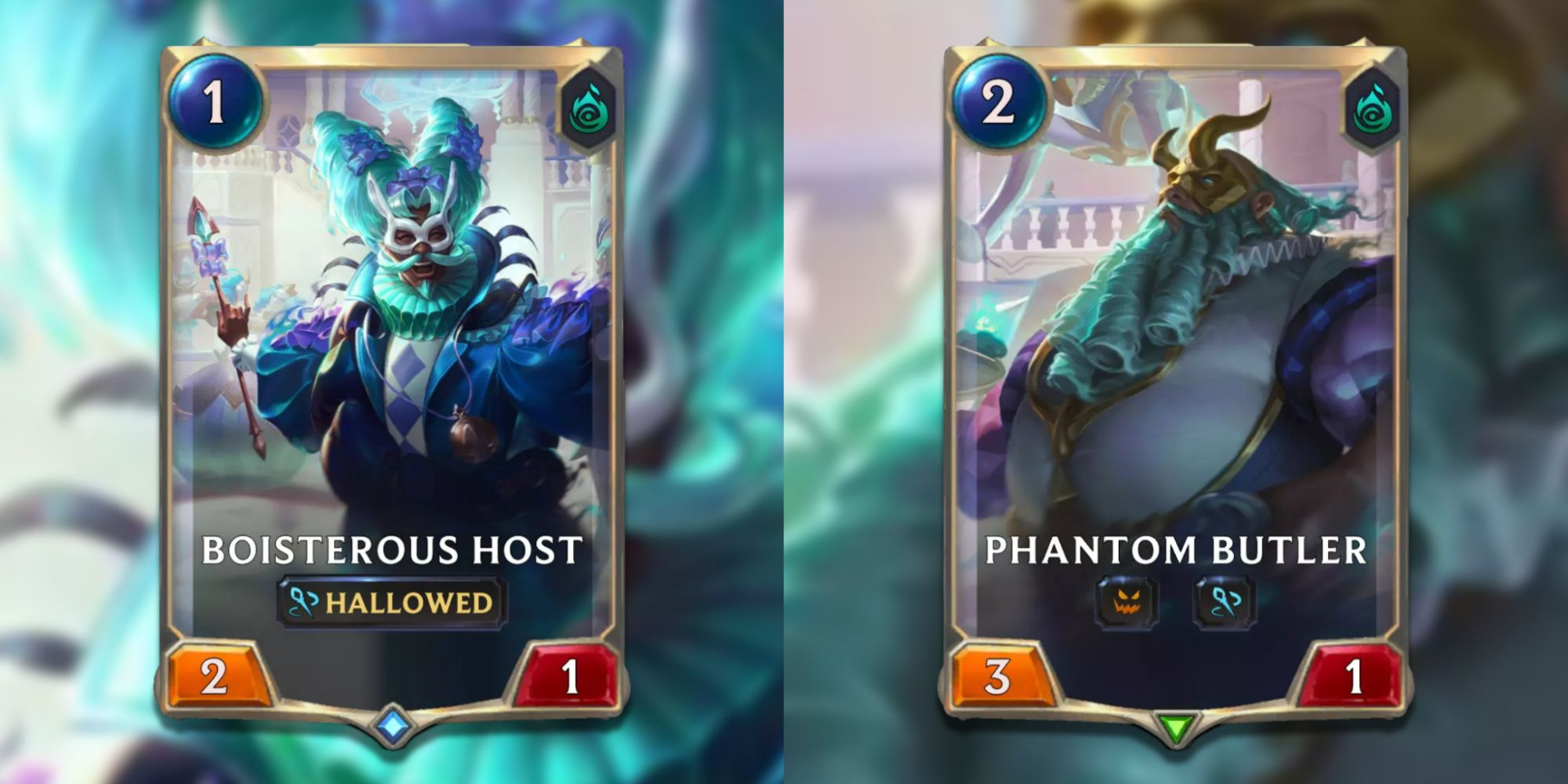 To beat an aggro deck you want to aim for value trades. This deck, while it can be aggressive, has a tough time out aggro-ing an aggro deck (notwithstanding exceptional circumstances). So, unless your opponent has an awful start, or you have a really great start, try to out-value them. You can gain some Nexus health back with Gwen’s attack passive, but don’t let them get free hits in if you can avoid it. Simply put, shift your strategy to a control-esque one and try to outlast them.

Be sure to mulligan as many one or two-cost minions as you can, with maybe one low-costing spell too. 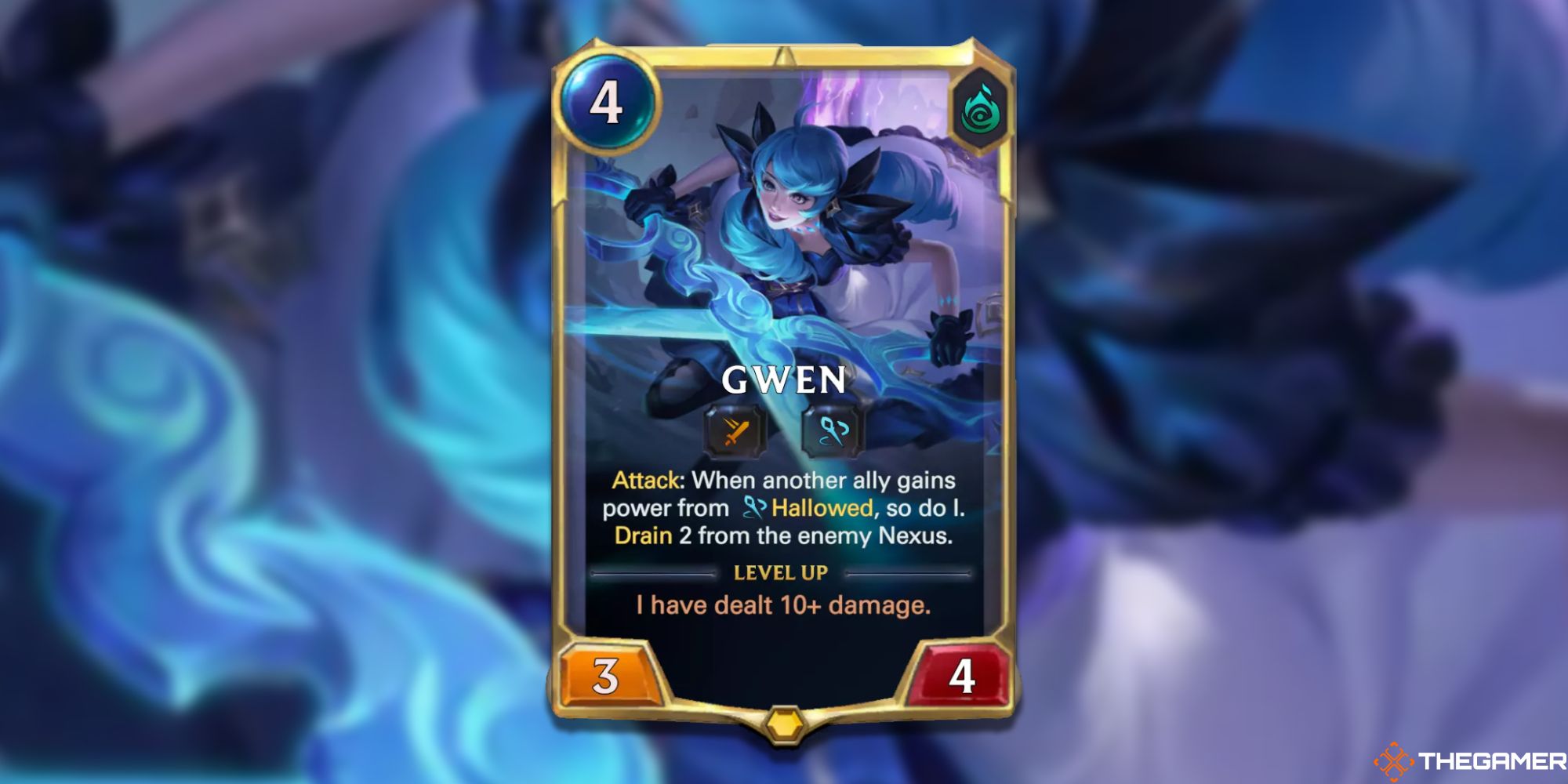 This seems obvious, but it’s super important to realize that if your opponent gets a better opening than you, you might have to sacrifice your champion cards in order to deal with their initial curve-out and try to stabilize. But, in most cases, you will rely on Gwen (or Katarina) to get your value trades in.

When it comes to your mulligan, you’ll want to aim for a healthy curve-out so you can match your opponent’s. So look for a one, two, and three-cost minion, and if you find a Gwen, definitely keep her in your hand. You may want to swap out Katarina for something else, as the fact that she recalls after her strike causes you to lose tempo and fall behind against a mid-range deck.

Katarina is tough to use against mid-range and aggro decks, and you’ll likely have to use her simply as a blocking unit if you draw her. But, if either of them is falling behind, she is a great way for you to put pressure on them. 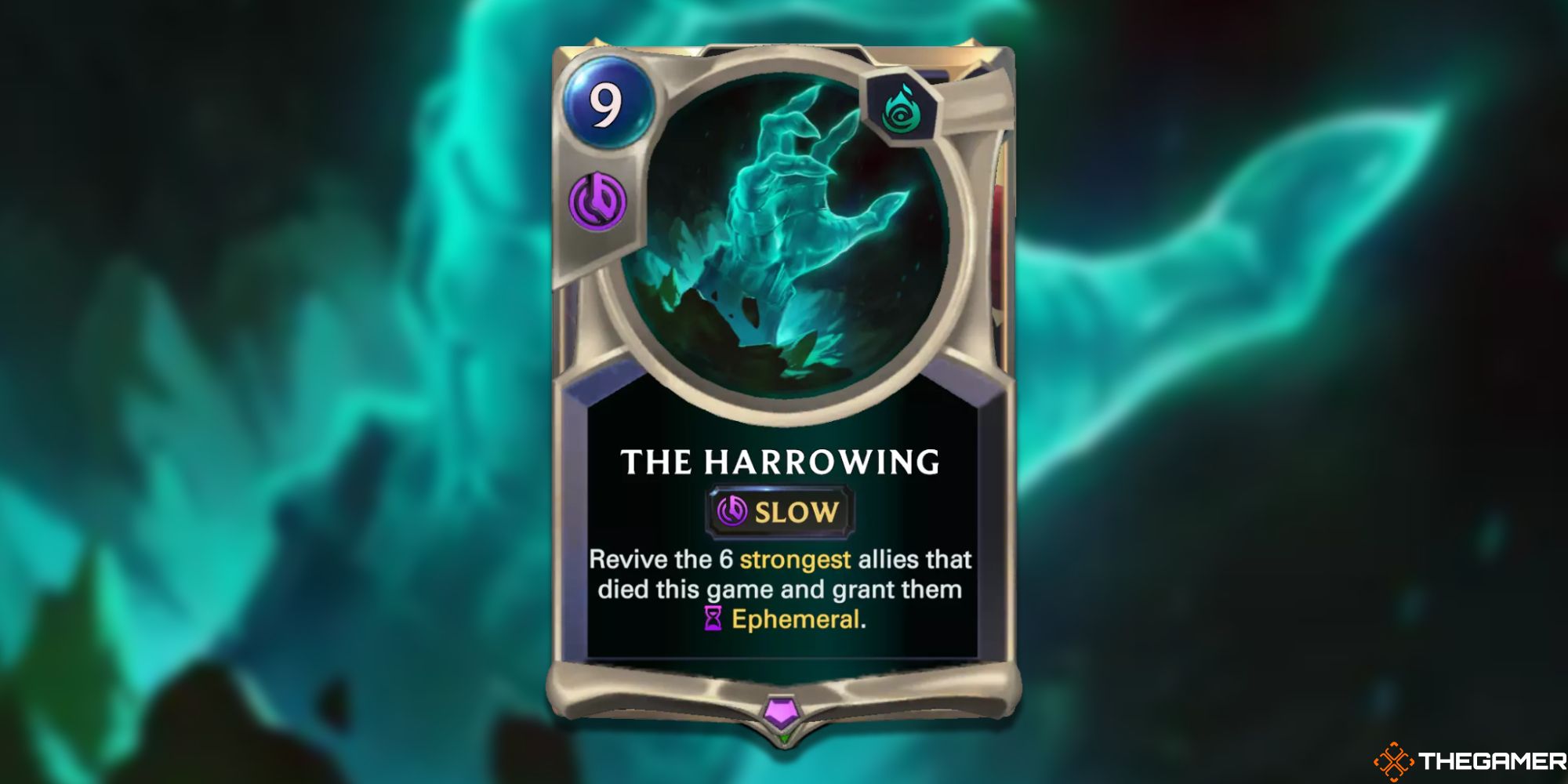 Dealing with control decks is a bit of a coin toss, as it really comes down to two things:

Either way, just remember that the only way to beat a control deck is with early and mid-game pressure. The Harrowing can be a saving grace in some cases, but about half of the heavy control decks with one-turn-kill (OTK) mechanics include cards from Ionia — which means they have at least one Deny in their deck. And, if your instance of The Harrowing gets Denied, you’re dead in the water. 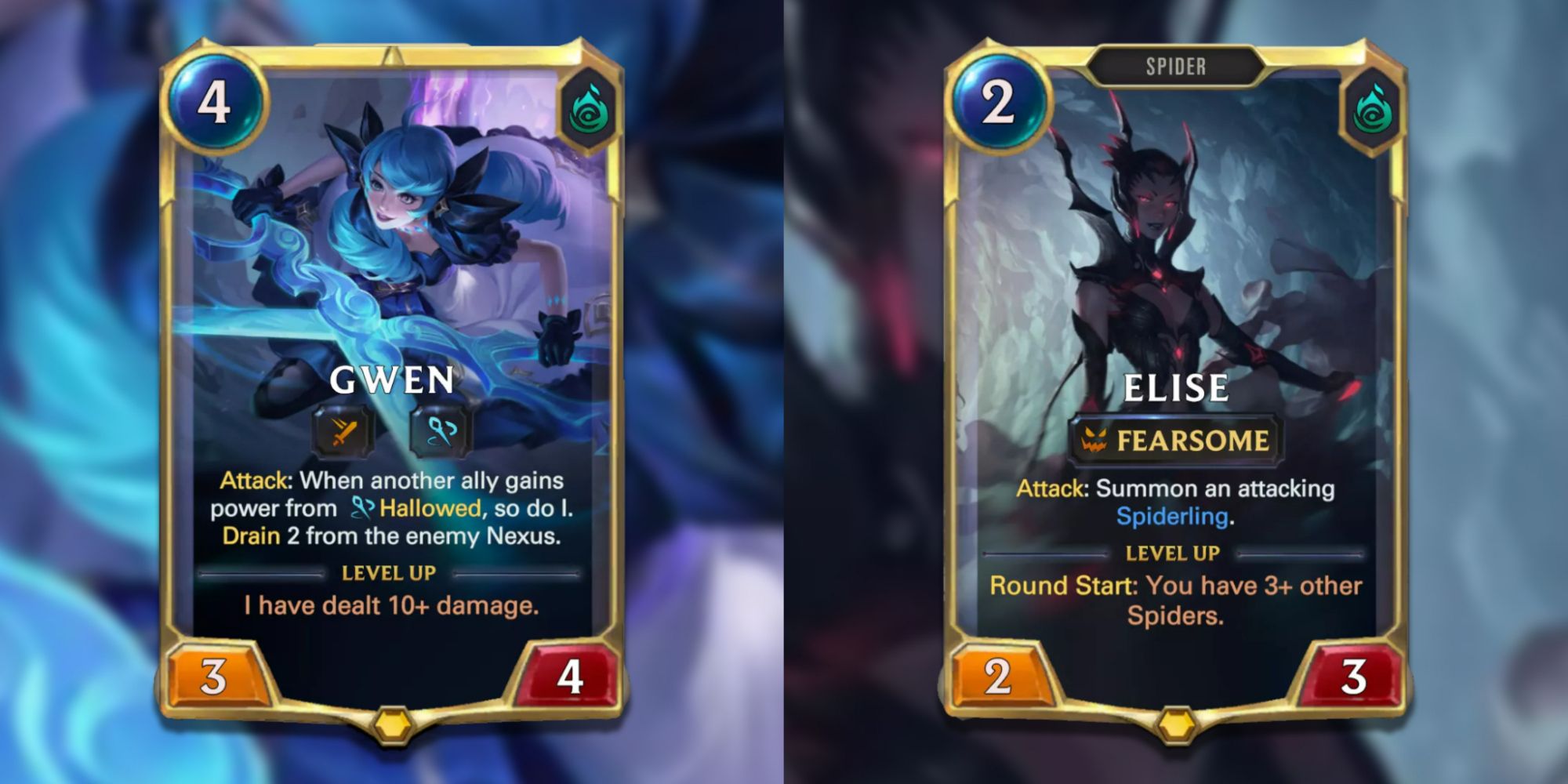 The Gwen-Elise variant is a very straightforward aggro deck. You could draft some late-game tools, but they won’t work that well, as Elise is a very aggro-focused champion. As such, most of your deck should be comprised of spiders and Hallowed units, with a few aggressive, low-costing Noxian and Shadow Isles spells.

You want to mulligan your one and two-costing units — if you have at least two one-costing units in your hand you can consider keeping a three-costing unit depending on your opponent’s deck — and put your enemy on the defensive as soon as possible. Be as aggressive as you can, unless you’re against another aggro deck. In that case, be wise with your trading. 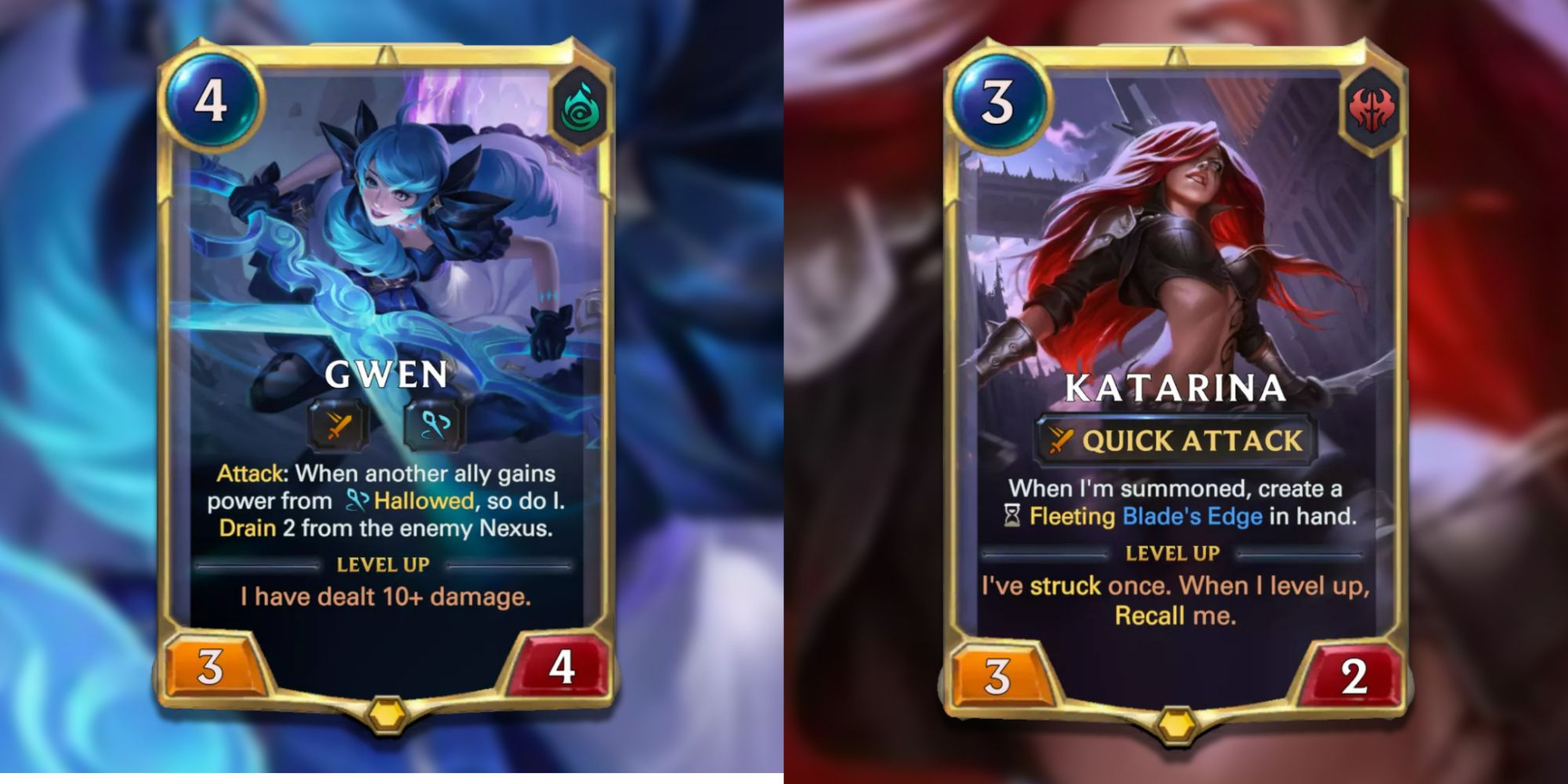 The Gwen-Katarina variant is pretty much the more mid-range version of the deck. Without any focus on Elise or her spider cards, your deck should be flush with Hallowed followers and spells to help defend and enable Gwen and Katarina. The Harrowing is a great finisher in this variant as well, and Gwen and Katarina both have much potential as win conditions.

The main thing that really changes here from the original three-champion deck is that there’s less emphasis on the early game. Your early game is less about pressuring your opponent and more about getting Hallowed followers out to start stacking the buff, which will support your bigger cards later on down the line. But, generally speaking, the combos are still very much the same as the original deck.