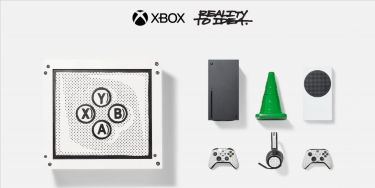 A new limited-edition Xbox bundle will give you both Series consoles, special controllers, a headset, and a green cone for $2000. And it will all come in a huge crate. If that seems random, that’s because it’s an artistic choice by studio Reality to Idea. Only 10 of these hand-painted crates will be sold today, April 28, on online shopping platform NTWRK.

The whole project is an effort to support Latinx visual artists. As such, 100% of the proceeds from selling these crates will be donated to the US Latinx Art Forum. The non-profit organization works to boost Latinx voices in the visual arts scene.

Curious fans were given a taste of what the crate looks like thanks to Grammy-nominated artist FEID, who unboxed one of the creates in his Instagram. He commented on how massive it was, and gave a close-up of the custom design on the controllers and headset.

Reality to Idea, or RTI, is the design studio and brand founded by artist and designer Joshua Vides. It has collaborated with big brands like Nike, Herschel, Fendi, MLB, and Converse to develop experiences like this Xbox crate. No doubt these 10 items will quickly become collector’s pieces and sell fast, which is great news for Latinx artists.