Live A Live: 10 Best Side Characters In The Game

Live A Live, Square’s classic RPG from 1994 now remastered and released worldwide for the first time, tells eight different stories across the centuries. Each story stars a central hero and features several allies that fight alongside them, enemies to overcome, and minor characters that make the world feel even more alive.

Some are fierce warriors that help you progress, others NPCs that add to the storyline, and several become heroes in their own right. From side characters that make us laugh to those who tug our heartstrings, there’s no shortage of interesting people in Live A Live. 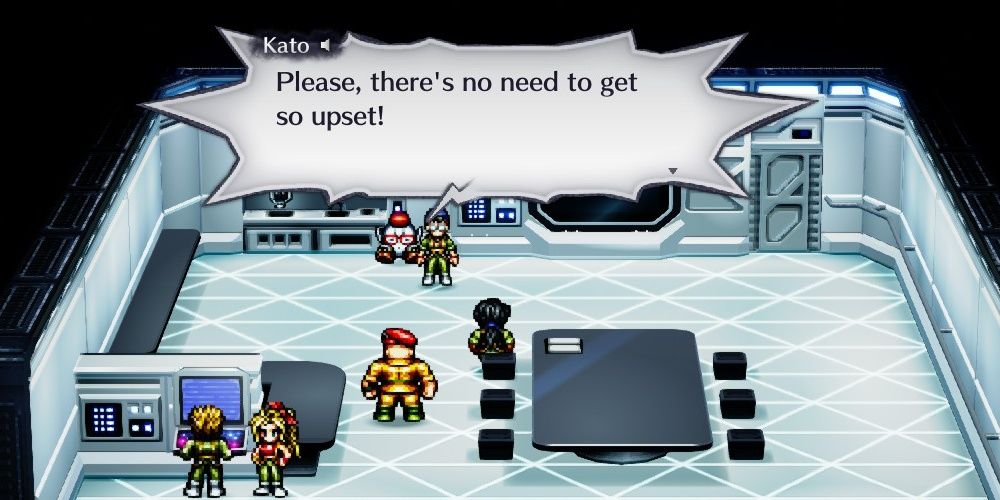 Yoshiyuki Kato, an NPC from the Distant Future: The Mechanical Heart chapter, created the main character, Cube. His care for the robot makes him an endearing side character. Playing through Cube’s perspective, you can’t help but like Kato and his love for his invention.

Kato’s compassion extends to the other characters of the scenario as well. You feel his pain as he mourns the deaths of other characters in the chapter. He also shows courage when it comes to saving his other crewmates. 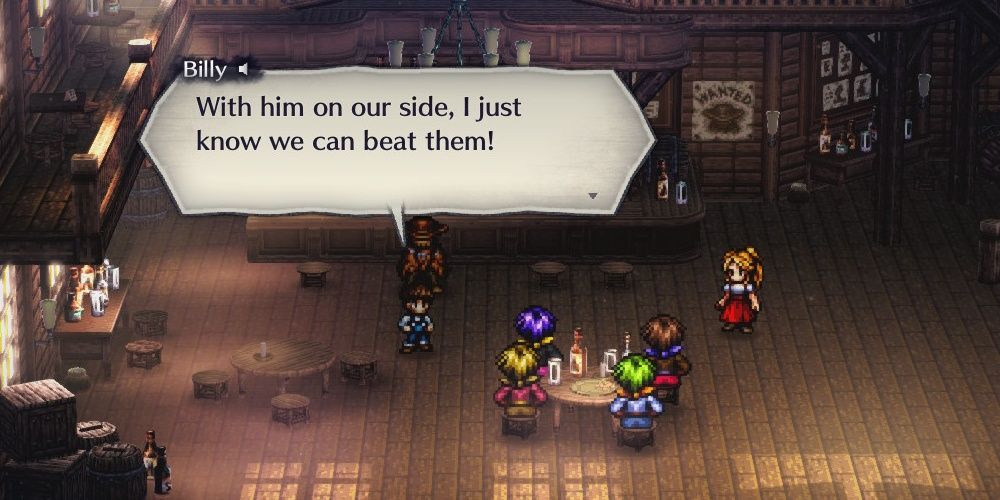 Billy, an NPC from the Wild West: The Wanderer chapter, shows outstanding bravery despite his young age. One of the few townspeople to stand up to the enemies, the Crazy Bunch, Billy even goes as far as to confront his own father, the Sheriff, for his failure to stop the gang.

Billy also steps up to help lay traps for you, and though he’s a little slow, he’s ready to leap into action with his slingshot. His boldness makes him a memorable character in the Old West scenario. 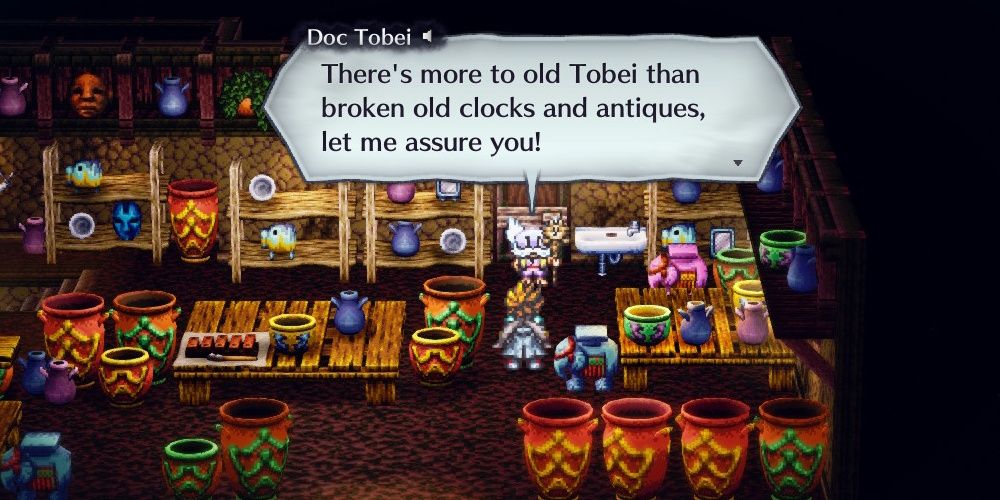 Dr. Tobei, an NPC from the Near Future: The Outsider chapter, plays a pivotal role in Akira’s story and helps you gain allies and tools needed to complete the story and stop Odeo. He’s an eccentric antique shop owner with extensive military technology knowledge, branding him as a unique and memorable character. His inventions are as wild as he seems to be.

Still, Dr. Tobei does have a softer side. His care for Akira and Matsu comes above everything else, showing some complexity to a character who could’ve been reduced to a bland scientist stereotype. 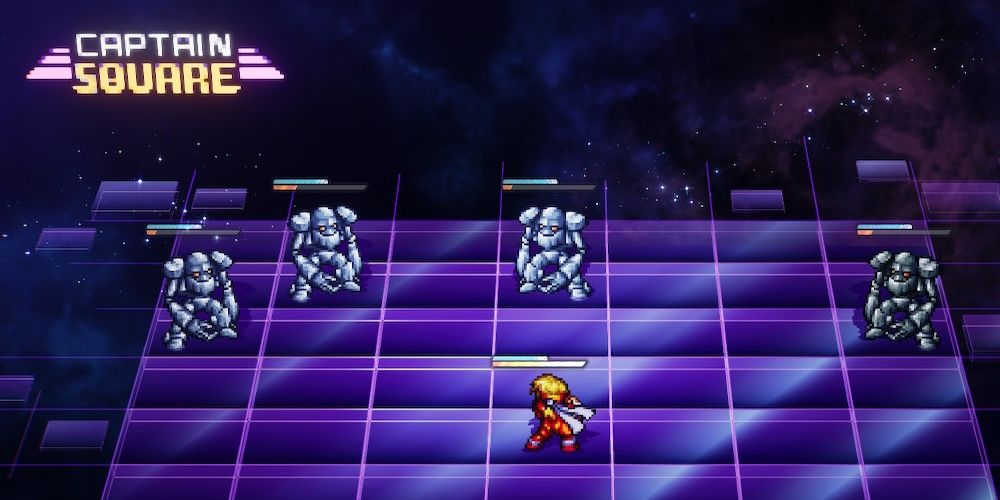 Captain Square, briefly playable for a segment of the Distant Future: The Mechanical Heart chapter, is unique for two reasons. Firstly, he is only playable for a minigame during Cube’s scenario. Unlike other party members in the game, though, he doesn’t level up. This makes his function as an ally very different from other playable fighters.

Captain Square’s second unusual quality is that, as a video game character, his appearance is very meta. Even his name is based on the game’s developer, Square. 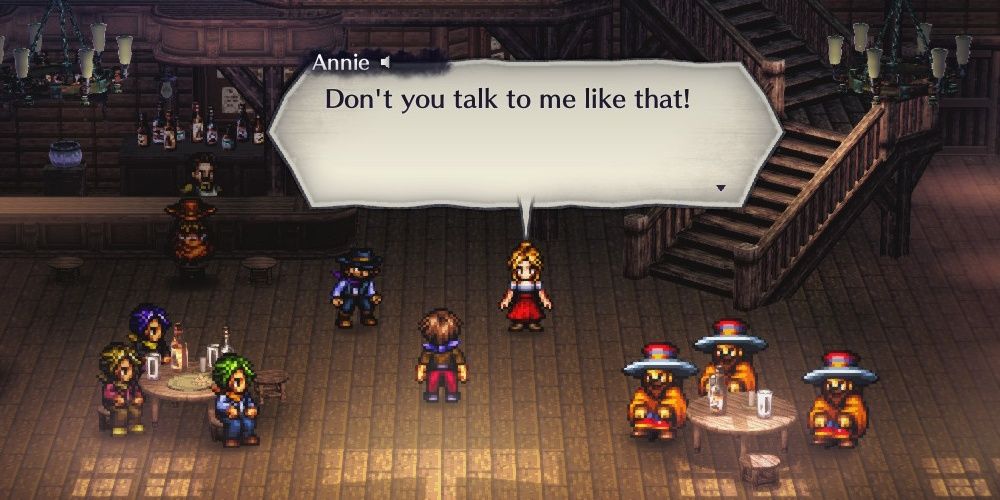 Annie, another NPC from the Wild West: The Wanderer chapter, stands out for her courage. She’s unafraid to stand up for herself when others mistreat her, and challenges Sundown and Mad Dog to fight back against the Crazy Bunch. She doesn’t leave the protection to the men either—she gets involved with defending the town, too.

Even as an NPC, Annie provides great assistance to you. Her trap of choice, too, gives her Disney’s Tangled Rapunzel vibes: a frying pan. It’s a strong choice for a strong woman. 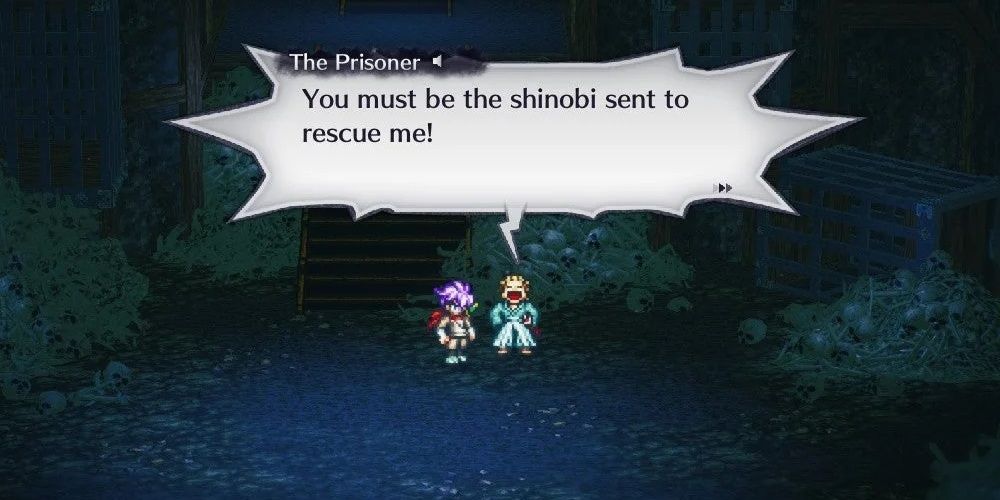 Sakamoto Ryoma is known simply as “The Prisoner” until the end of Twilight Edo of Japan: The Infiltrator chapter of the game. Despite his desire for peace, he is an incredibly helpful party member. His stance against violence contrasts him with the main enemy of this scenario, Ode Iou.

His views on fighting also make him an interesting dynamic with one of the main challenges of this chapter, which alters its story based on whether you have no kills or many kills. In many ways, The Prisoner seems to idealize the pacifist route of the chapter, even if he does participate in fighting to regain control of the palace. 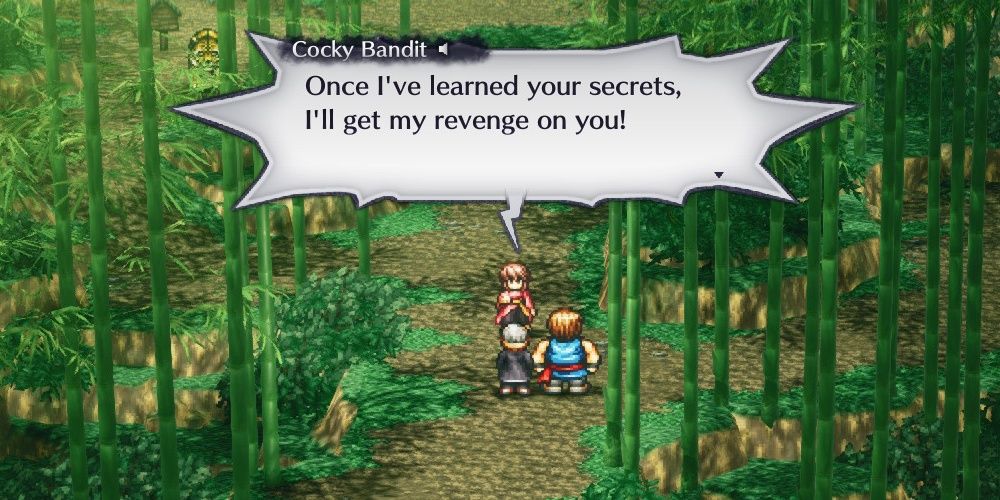 Lei Kugo, one of the Earth Heart Shifu’s students in Imperial China: The Successor chapter, is the game’s only playable female character. That alone makes her worthy to appear on this list, but she also has a vibrant personality that makes her one of the most memorable characters in the game.

Out of the Shifu’s students, Lei Kugo is most eager to jump into battle and confront any challenge the Shifu may present. Though her hot-headedness lessens by the end, she remains a passionate and skilled warrior. 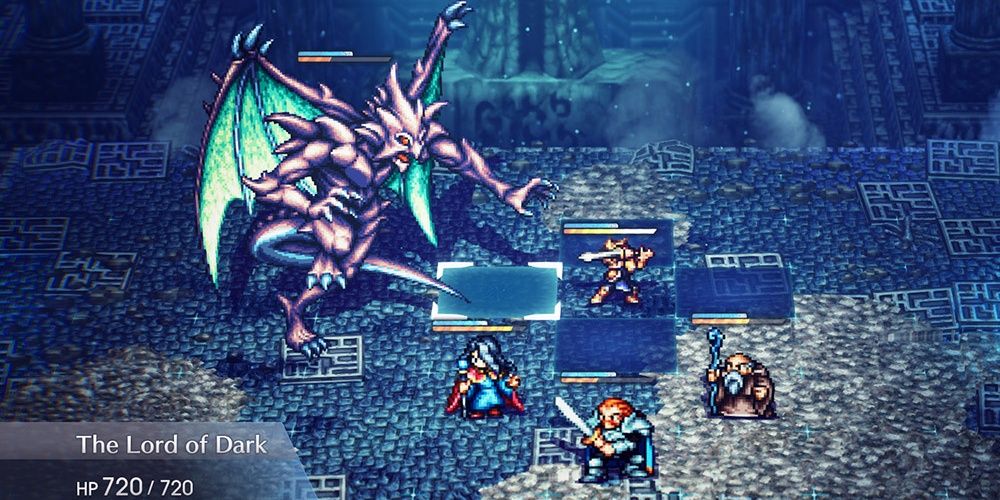 Uranus, a playable ally in the Middle Ages: The Lord of Dark chapter, is marked by his humility. Though once a mighty hero, he chose to live in solitude and doesn’t seek credit for his deeds of valor. However, when called back into the fight, he rises to meet the challenge.

His power and usefulness as a party member come through his healing move set. He may not be a heavy attacker, but his ability to restore health to allies makes him a valuable asset. 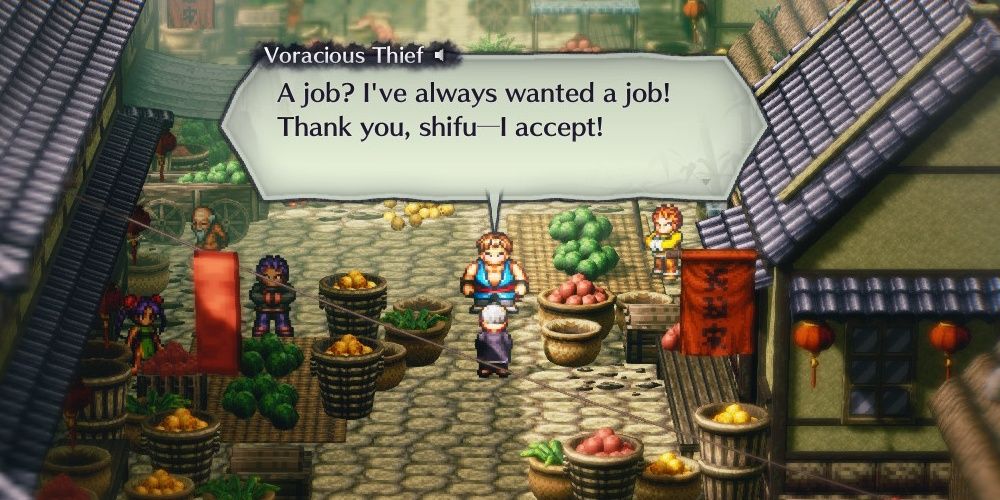 Hong Hakka, another one of the Earthen Heart Shifu’s students in Imperial China: The Successor chapter, starts his story being ridiculed by others in his village. They make fun of his size and his appetite, causing him to feel shame about his body image and love of food.

However, the Shifu immediately encourages Hong Hakka to see his body as a strength and not something to be ashamed of. By the end of Hong’s character arc, he grows to be confident in who he is and overcomes his negative perception of his body. His story is truly inspirational and relatable. 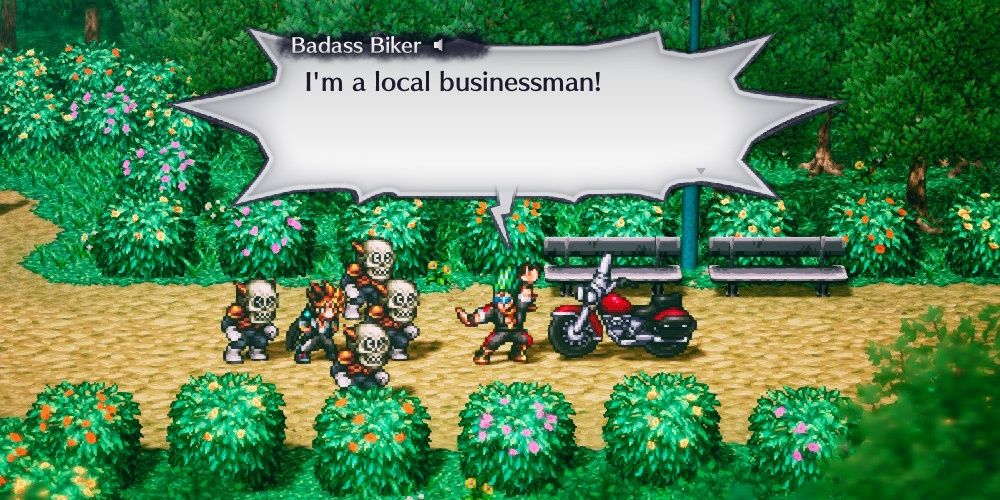 Matsu, known also as “Lawless” in the Near Future: The Outsider chapter, perhaps has the most heart-wrenching character arc of the entire game. Introduced as one of Akira’s closest friends and allies, it’s later revealed that Matsu was responsible for the death of Akira’s father. His story ends with his sacrifice to save Akira.

Beyond Matsu’s sad character arc, he is also a cool character, riding to the defense of those he cares about on his motorcycle. His powerful attacks make him a formidable party member as well.