Lord Of The Rings: Gollum Devs Explain Its “Creepy” Elves And Melian’s Role

NACON’s Bigben Week in Paris hosted previews of a variety of the publisher’s forthcoming games, but there was only one I was really there to see. Steelrising may have surprised me with its polish, Clash: Artifacts of Chaos was a wonderful, colourful, and surprisingly robust action adventure game that I hadn’t even heard of, and Blood Bowl 3 is vastly improved over its beta. But none of them were Lord of the Rings: Gollum.

I’ve been following Gollum since it was first announced, as have many Lord of the Rings fans. Lord of the Rings games can be hit and miss, especially in recent memory. The Shadow of Mordor series has fun, Assassin’s Creed-esque gameplay but completely bastardises the lore. The Lord of the Rings Online, despite being 15 years old, is still going from strength to strength, and faithfully folds a surprising amount of Tolkien’s world into the MMO. Netease has also created a mobile MMO based on the Tolkien license, but takes more liberties. How would Gollum toe the line? The short answer is that it will be based on Tolkien, but fill in some gaps. The long answer is, of course, a bit more complicated.

I’m going to start at the beginning. Lord of the Rings: Gollum was in a room separate from the other games. The room was striking, every wall adorned with huge eyes of Sauron from the new key art. Two large monitors were showing gameplay. This was a hands-off preview, so two developers had the controllers in hand. 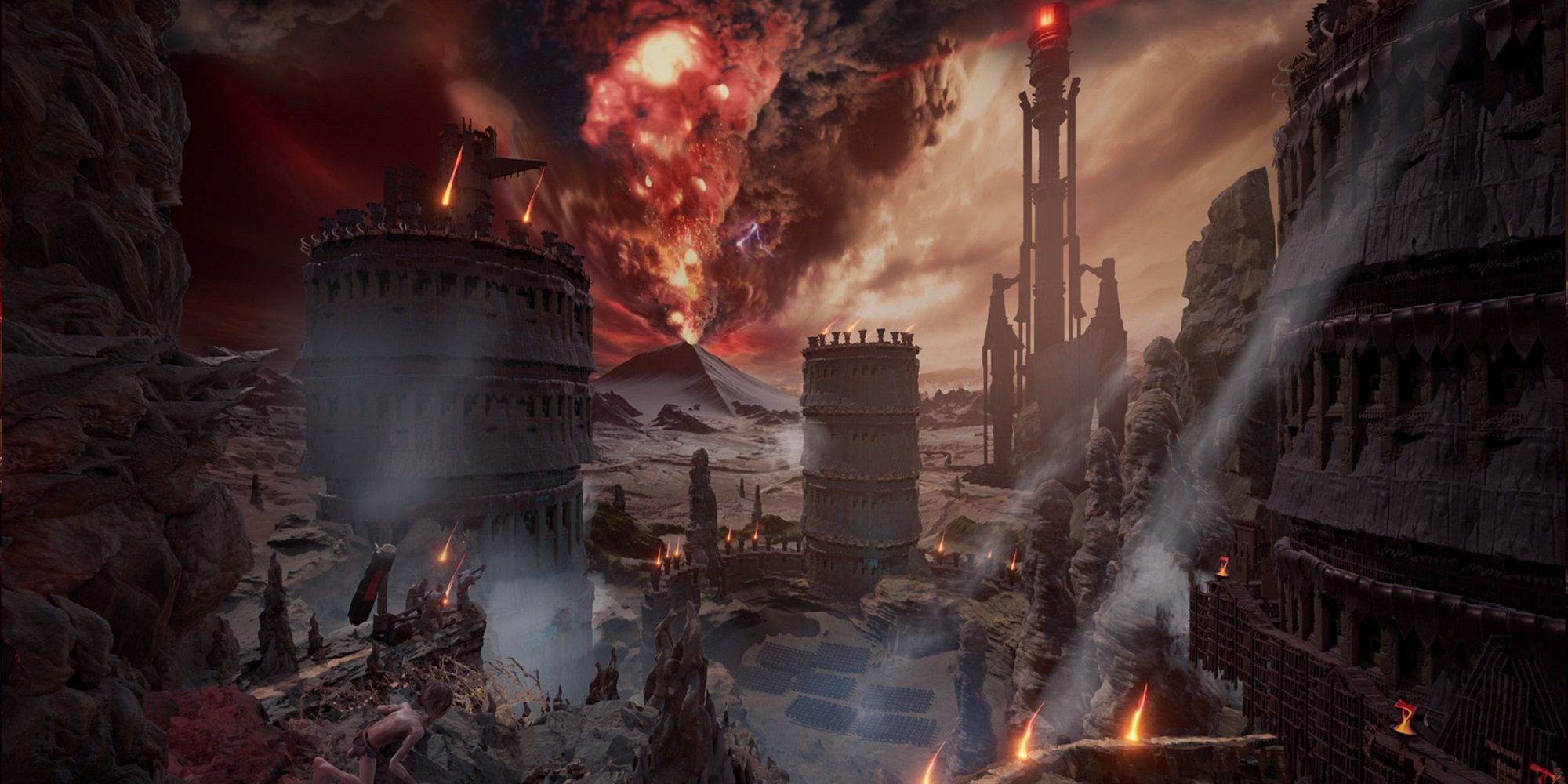 One of these devs was Saide Haberstroh, the game’s project manager, who guided me through two sections of Gollum. The first took place in Mordor – Cirith Ungol specifically – where the first half of the game is set. She showed off Gollum’s stealth abilities such as hiding in long grass and activating ‘Gollum Sense’ (you know, like Eagle Vision in Assassin’s Creed or Bloodhound’s Ultimate in Apex Legends), parkour abilities like climbing, jumping, and wallrunning (yes, really), and the decision-making process as Gollum argues with Smeagol, that Daedalic has touted as the primary conflict of the game.

It’s hard to tell how good the stealth aspects of a game are unless you’re actually playing it, but it all seemed to work well. Combat is discouraged – you’re a scrawny little thing, after all – but your “Deus Ex inspired” parkour can get you out of a scrape if some Orcs (or worse) spot you. The most interesting part was seeing how the Gollum-versus-Smeagol internal debates worked out. We only saw a low stakes option, as the pitiful creature decided whether to kill a beetle or not, but Haberstroh assured me that future decisions would be more impactful and actually affect the story and gameplay.

It seems that in most cases, the two options will offer either a stealth or a parkour route through the levels, but more complicated decisions will have multiple internal questions for Gollum (or Smeagol) to answer, and each one affects a kind of tally to determine his final resolution. Haberstroh saved the beetle, if you’re interested. 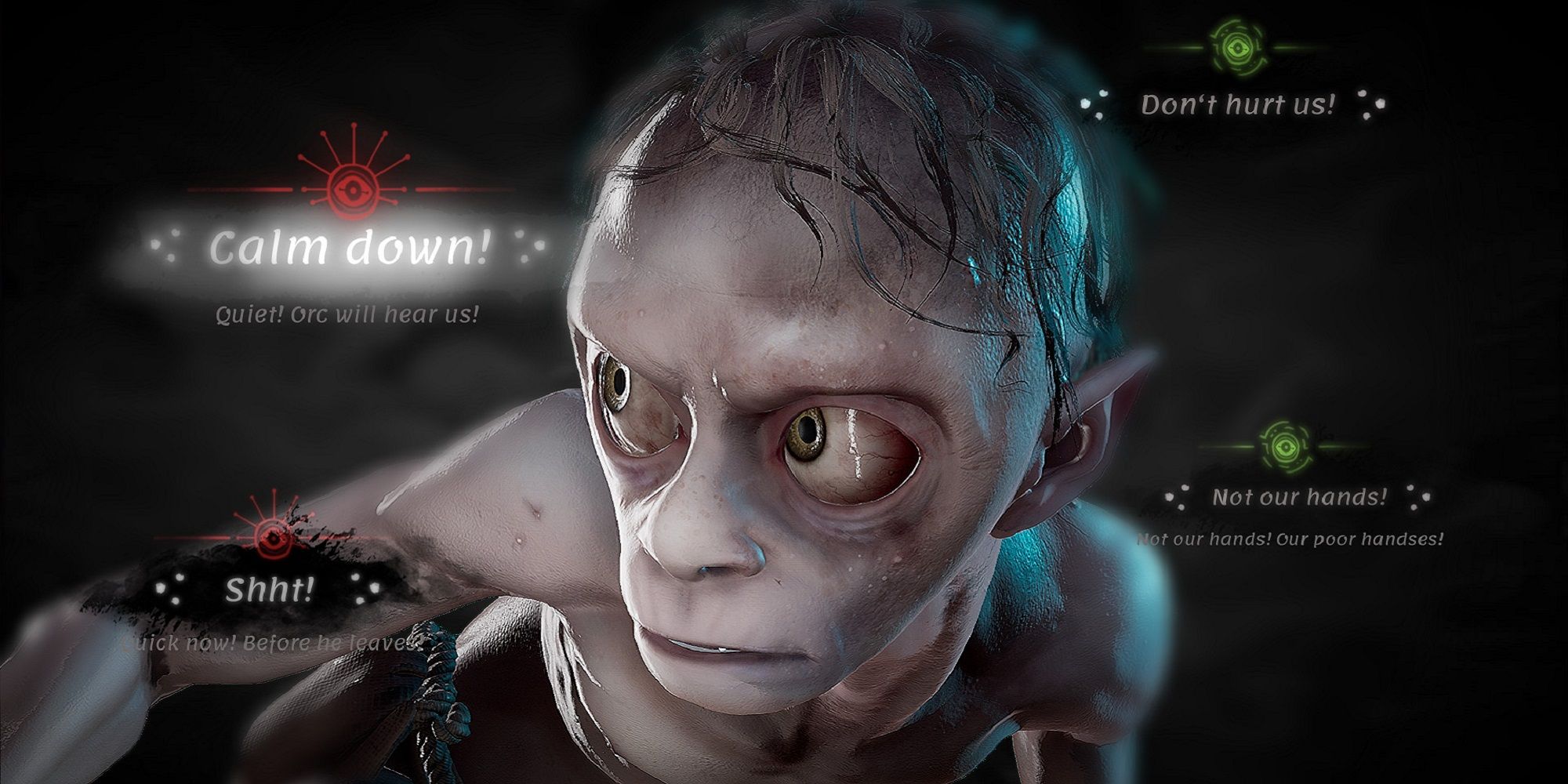 Just then, a Nazgul mounted on a Fell Beast swooped in and Gollum had to scurry for cover. That’s when Haberstroh’s colleague Damiri Knapheide, who was acting as the game’s Tolkien lore expert, stepped in and pointed out how different the winged beast was from those in Peter Jackson and Fran Walsh’s infamous trilogy. It wasn’t an exact replicat, I’ll give him that, but it struck me as more of a panned Weta design than something entirely original, much like the Gollum design does. Obviously both designs are based on the same source material, and they are distinct, but the film has clearly influenced Daedalic’s Mordor. It’s hard to avoid that, in fairness.

Knapheide's knowledge was vast and his reasoning sound. His expertise really came into his own when Haberstroh walked me through a level in Mirkwood. As well as mentioning that there would be plenty of easter eggs for fans of the Lord of the Rings (and The Silmarillion) books to find, he focused on the sadness of Thranduil and the elves. In Daedalic’s Middle-earth, Thranduil and his Sindarin kin have a knowledge and appreciation for the Valar, but – having never lived in Aman or seen the light of the Two Trees – they may not know that Elves are reincarnated in the Halls of Mandos after death. Apologies for the vast oversimplification there.

As such, Thranduil’s halls are filled with opulence, beauty, but also sadness. Knapheide suggests that Thranduil is mourning the death of his wife, Legolas’ mother, and that will have some importance to the story. He also emphasises that the Elves of Mirkwood are “creepy,” as are their customs. I don’t see any of this, in fact I barely see an elf in this section of gameplay as Gollum climbs and swings through silent chambers, but it all sounds a bit folk horror, and I’m on board. The Jackson/Walsh elves are more like Vulcans than Tolkien’s Noldor, so this take feels fresh. 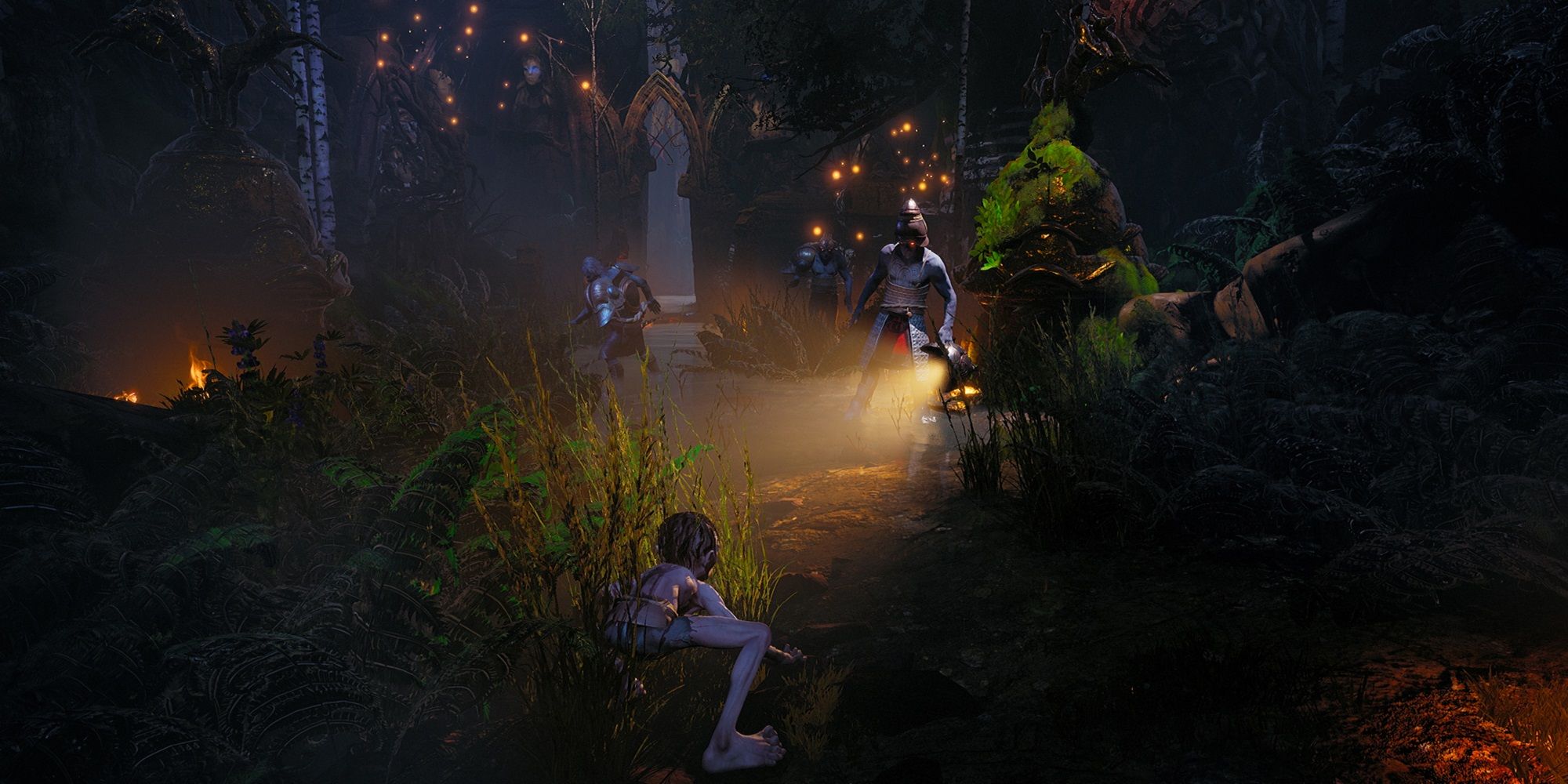 Much like the Rings of Power television series releasing a day after Gollum, Daedalic is filling in the gaps of Tolkien’s work to tell its story. The most interesting part of this is regarding Thranduil’s childhood, of which little is known. Many assume he was born in Doriath, as that’s where his father lived, and the first recording of Thranduil is when he arrived at the Greenwood (later Mirkwood) with Orophin (his dad) and a small band of Sindar.

What Daedalic has taken from this, however, is that this band also carried with them a precious heirloom. The Girdle of Melian is not what I expected to hear come up in conversation, but apparently it will play a “big part” in the Mirkwood sections of the game. For those who haven’t read The Silmarillion, Melian’s Girdle is not a physical item, it’s a magical enchantment that surrounded Thingol’s kingdom of Doriath, preventing anyone from entering against the king’s will. In Daedalic’s Middle-earth, Thranduil brought this enchantment with him to the Greenwood, and it protects the forest, or at least his kingdom, to this day.

I pushed Knapheide as far as I could with this (“I don’t know if I can tell you that,” was the phrase I heard most often over the conversation), but he offered no specifics other than that he and the team had consulted the Lord of the Rings books as well as The Silmarillion and Unfinished Tales for the game. The Tolkien Estate obviously had a big say, too, and okayed the Girdle’s use. Lore-wise, this is a possibility; it could have happened. Whether it fits with how Tolkien wrote about magic and spellcasting is another matter entirely, and while it could seem plausible that the ability could be passed down through generations, surely no elf would be as powerful as a Maia? The jury’s still out on this one for me. 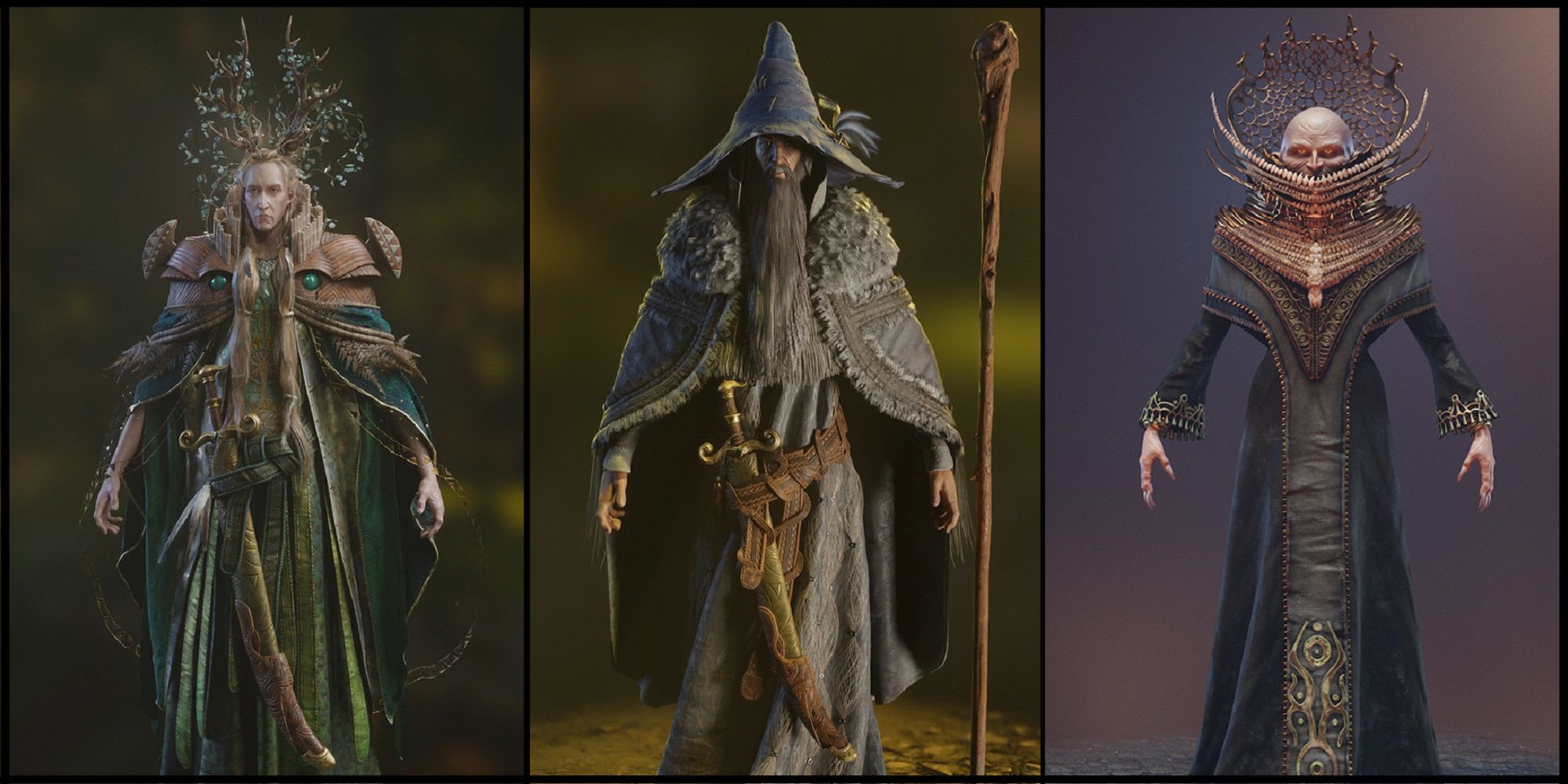 Gollum roams the halls of Thranduil, where the second half of the game takes place, and the designs look great. The bleak rock of Mordor got a bit samey, so the wooden interiors were a welcome break and Gollum clambering all over them means you get to see all the details. One part of the level sees you evade capture by Gandalf and Thranduil – you’re allowed to be in Mirkwood, but you’ve just stolen a magical bell – for a good while. I spent the first few minutes marveling at the designs of both as Haberstroh took cover from the constantly meandering pair. They look really good, and a far cry from the Jackson/Walsh designs, which makes me happy. However, the stealth gameplay got a little stale quite quickly, as Gollum hid behind chairs and tables, constantly having to move out of the pair’s field of vision. After a long five minutes, they split up and caught Gollum, leading to a game over screen. That level in particular could get tedious if you have some bad luck.

Ten levels have been cut from the game, mostly so that Daedalic can perfect what they have, and make their deadline of releasing on September 1. The only thing that Haberstroh and Knapheide mentioned was vetoed by Middle-earth Enterprises (the Tolkien Estate) was Gollum learning new abilities as the game progresses – that means there’s no skill tree. In their eyes, if he hadn’t learned those skills in his 500-year life before these events, why would he suddenly learn them now? 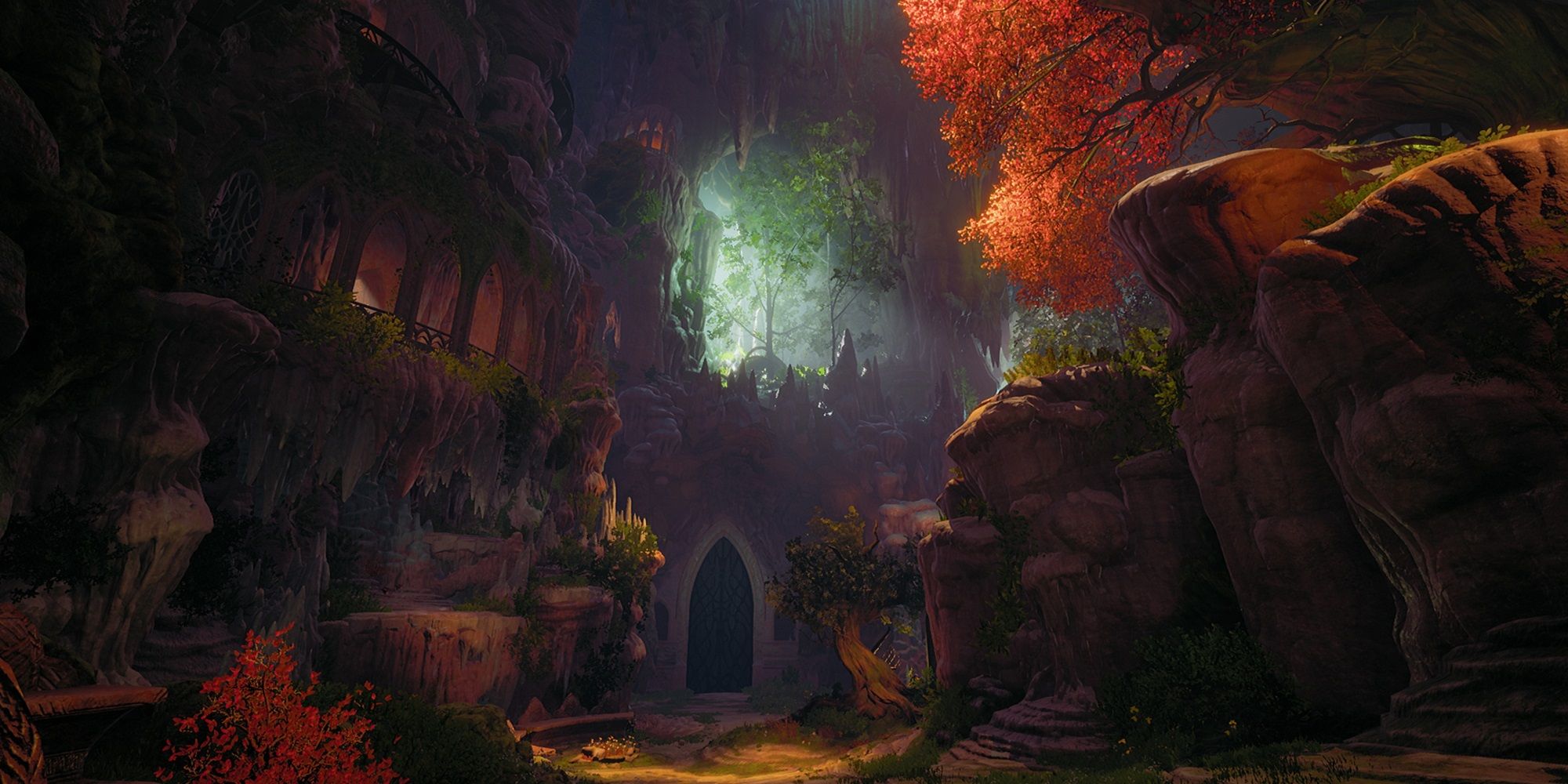 In terms of additions, there are a few new characters. Mell is a blind elf and an ally to Gollum, who can aid him in the second half of the game. The relationship is transactional, however, as she doesn’t lend her powers lightly, and requests that Gollum frees her from imprisonment in return. He can talk to her through any water in the level, and I saw her act as more of a guide than anything else. There are similar allies in Mordor, one of whom is a Dark Numenorian. Hardcore Tolkienists should have less of a problem with these than the Girdle of Melian or, say, Halbarad in the Rings of Power, because it is unlikely they directly impact the wider story of the Ring or the events that Tolkien described. They’re just lowly beings in the grand scheme of things, but for Gollum they could be a lifeline.

Daedalic has a big job with Lord of the Rings: Gollum, as Tolkien fans aren’t easily sated and the expectations are high. My thoughts are varied at present, and are unlikely to be distilled until I have a hands-on preview of the game. The parkour looked fluid, but the stealth could go either way. As for the lore, the additions seem solid even if the Melian connection is a bit of a stretch. If anything, speaking to Knapheide reassured me the most on this side of things, as he dipped into his vast pool of Tolkien knowledge before my eyes. I was also surprised to know that Gollum is launching on the Switch, and it’s not planned to be a cloud version, either. I’ve come away from the preview with more questions than answers, questions that can only be answered when I get my hands on the game for myself.