If you are a more casual Lost Ark player, finding all the Hidden Stories throughout Arkesia might be the perfect endgame activity for you. These secret side quests found in your Adventurer's Tome not only reward you with extra Virtue stat points but often reveal little hidden bits of lore. Besides this, gaining more Virtue points is essential for leveling up your Rapport with certain NPCs.

Yudia is one of the first continents you come across in your Lost Ark adventures, and though its Hidden Stories do not require any special Sheet Music or tricky puzzle solving mechanisms, collecting them all can prove challenging. 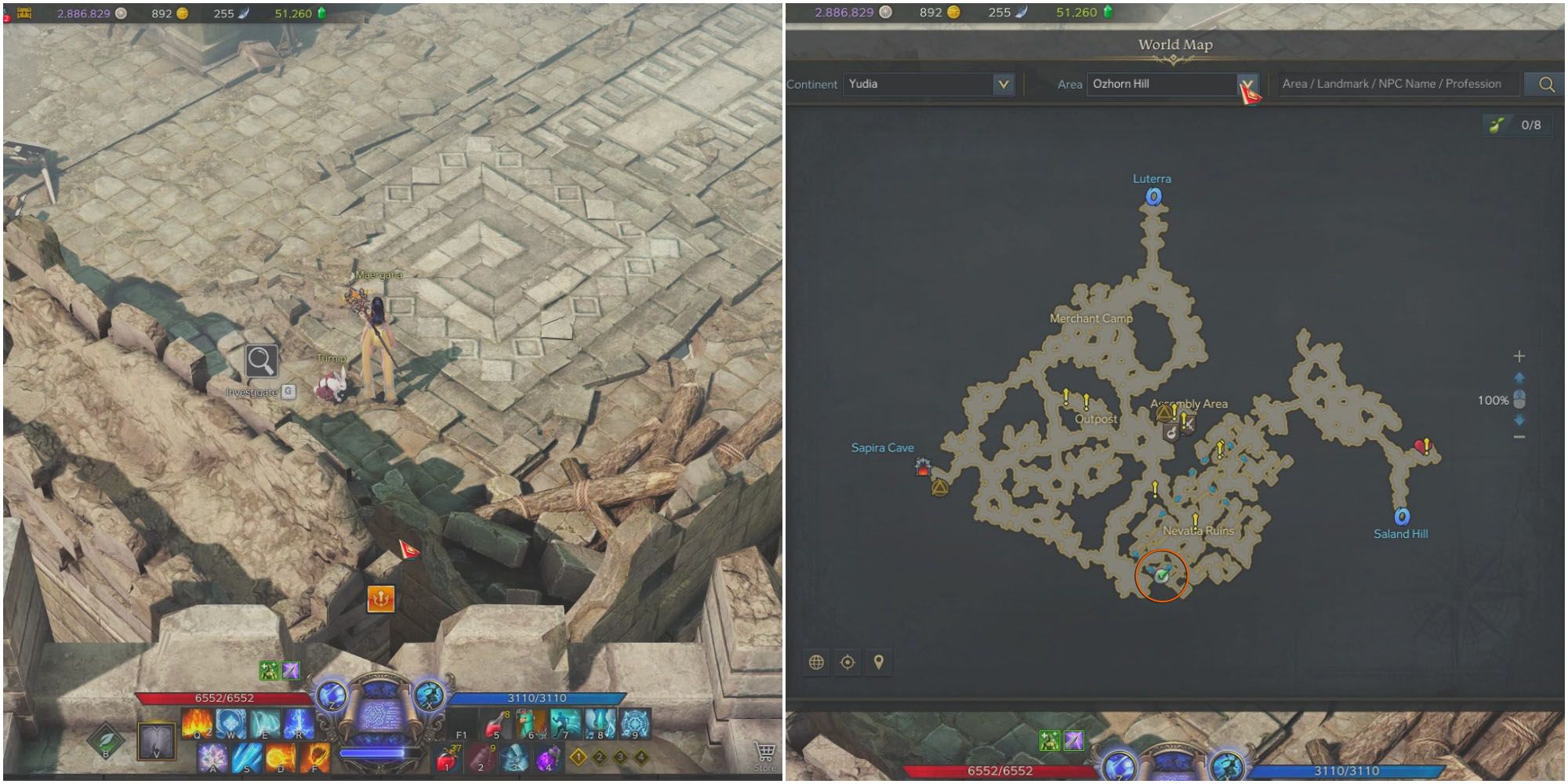 From the Assembly Area Triport in Ozhorn Hill, move south to the Nevatia Ruins. From here, if you continue south past the NPC Archaeologist Alika, take the first set of stairs you find to your left. Although the Hidden Story describes someone crossing a rope, if you proceed south on this platform you will come across a long crossable log.

On the other side just beneath the crumbling wall to the left of a pile of timber is a headless corpse. Investigating it reveals the tale of a woman who was sacrificed by Kisar the King of Encavia in a ritual attempting to save their land from ruin. 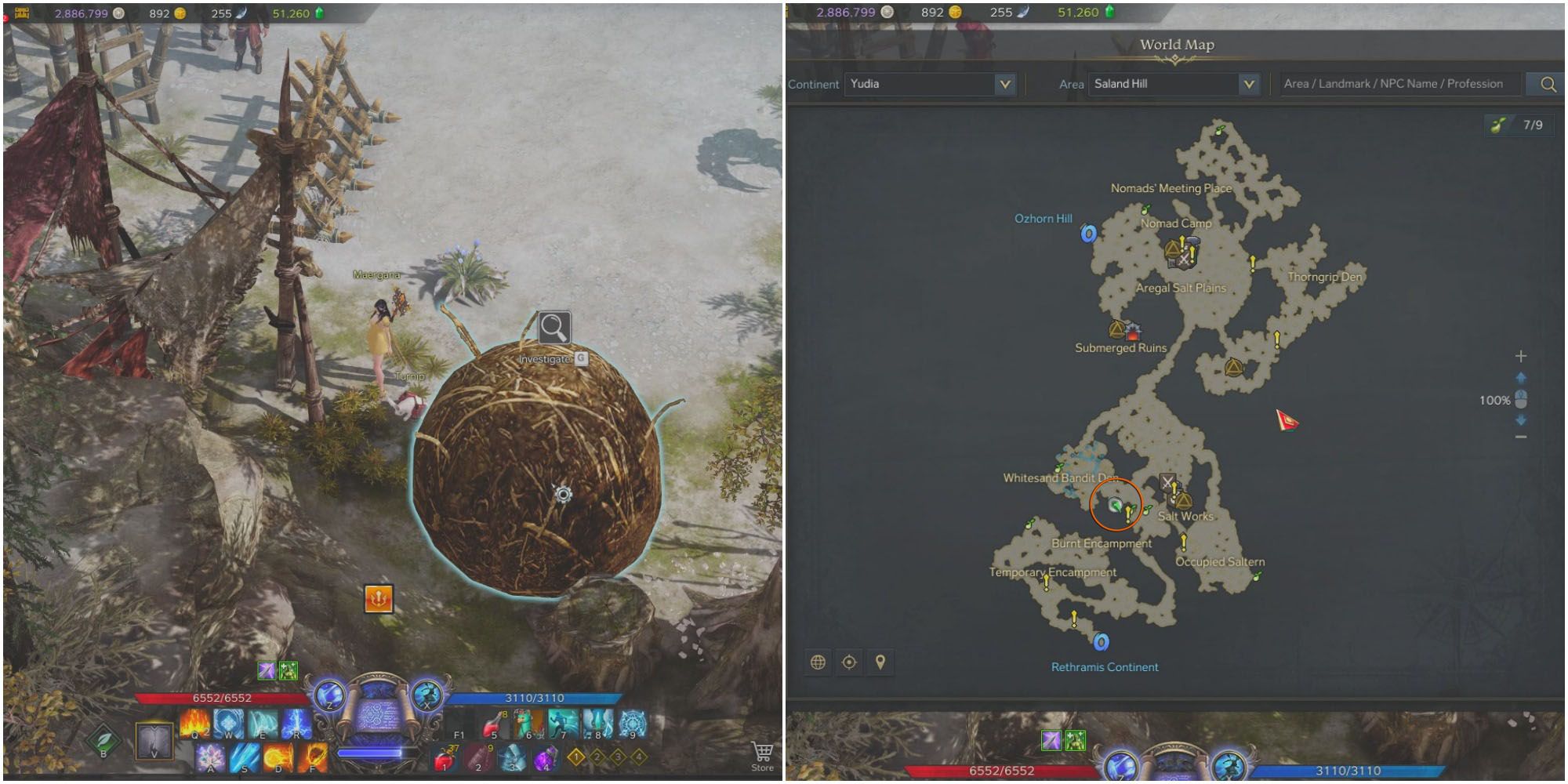 This rather large Hidden Story item is weirdly hard to miss, simply because you might never suspect what it actually is. Travel to the Salt Works Triport in Saland Hill and make your way directly south. Before you get to the land bridge, head west until you find a brigands' camp.

In a little alcove at the bottom of the camp, there is a giant brown mound. Investigating it proves it to be a "large pile of feces", undoubtedly from the giant worm that the Saland Hill brigand leader foolishly tried to tame.

5 Spending An Eternity Together 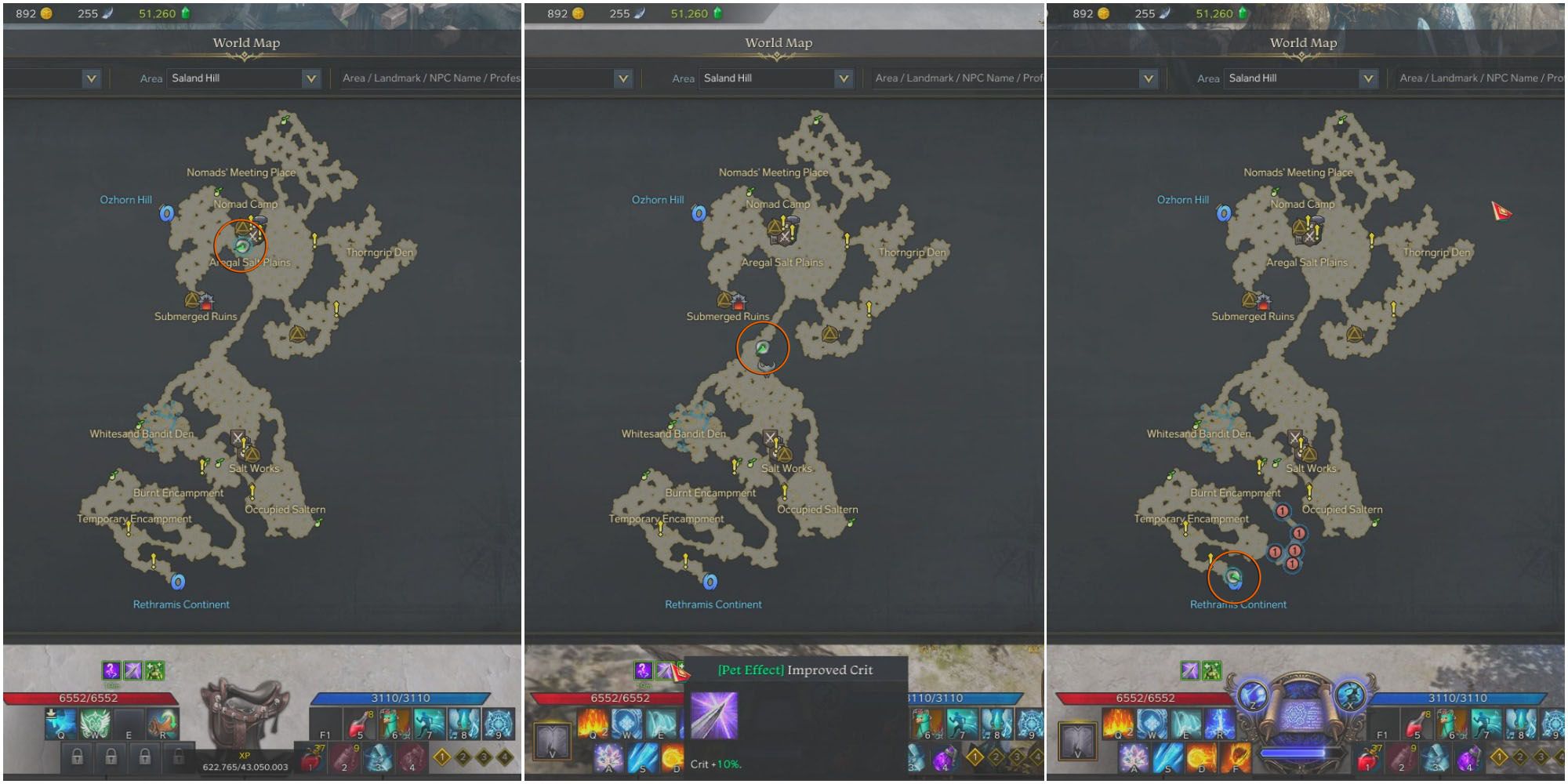 This heartwarming story leads you all throughout Saland Hill to the Rethramis Border.

Spending An Eternity Together Locations 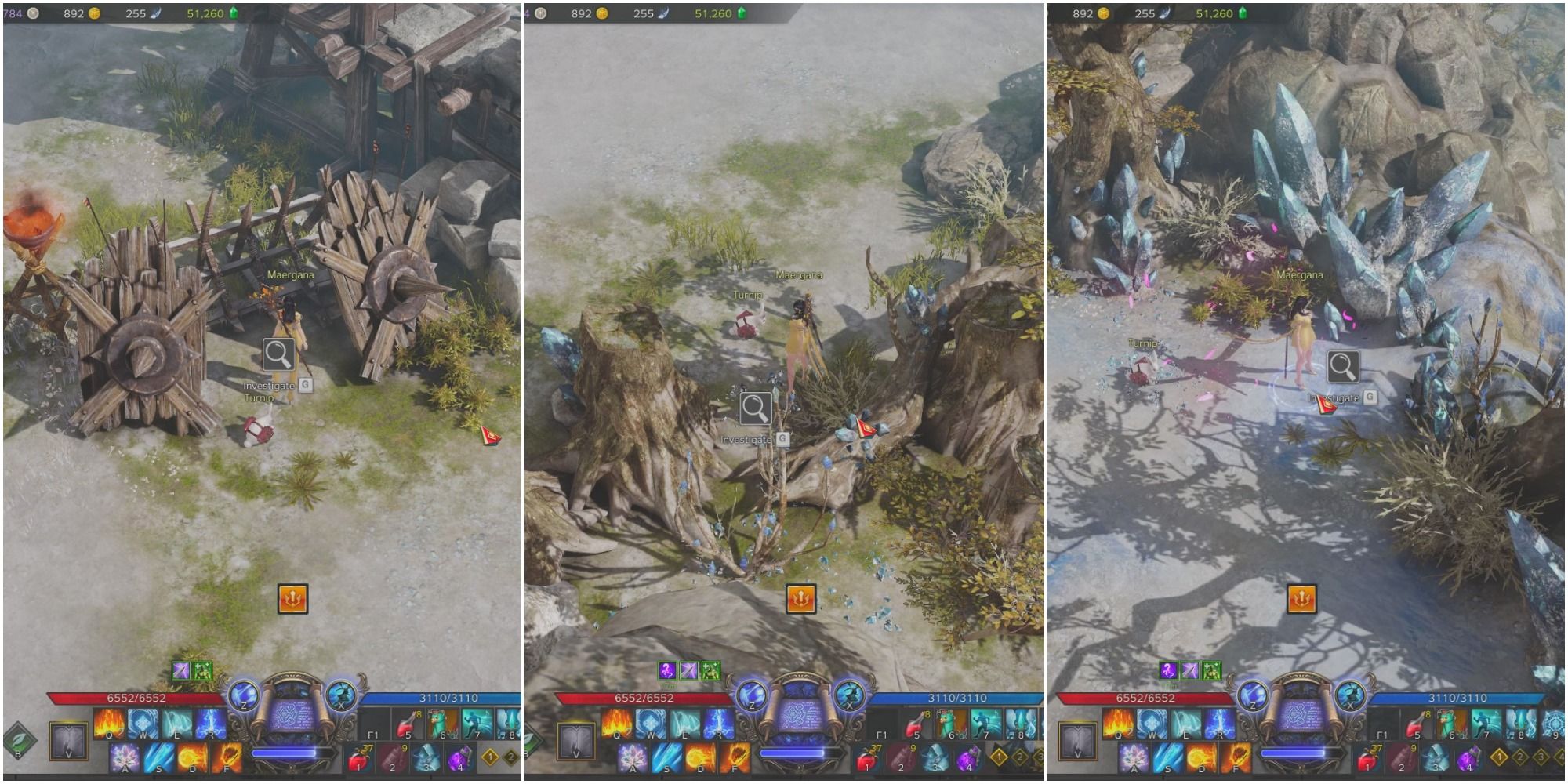 Starting at the Nomad Camp Triport, you will begin retracing the "steps" of the man who left for Rethramis. Exit the Nomad Camp to the south, and turn right to find a wooden barricade. Between the two shield spikes is a bag with a pocket watch inside.

Continue on your way to the Rethramis Border, across the land bridge as if you were going to the Salt Works. At the very end of the bridge, on the right-hand side between two rotted tree stumps is another bag you can investigate.

Now simply continue all the way to the Rethramis Continent entrance, and investigate the blue salt crystals to the right of one of the barricades. A small red ring box lies on the ground and investigating it helps return it to the nomad, so he can finally make his surprise marriage proposal. 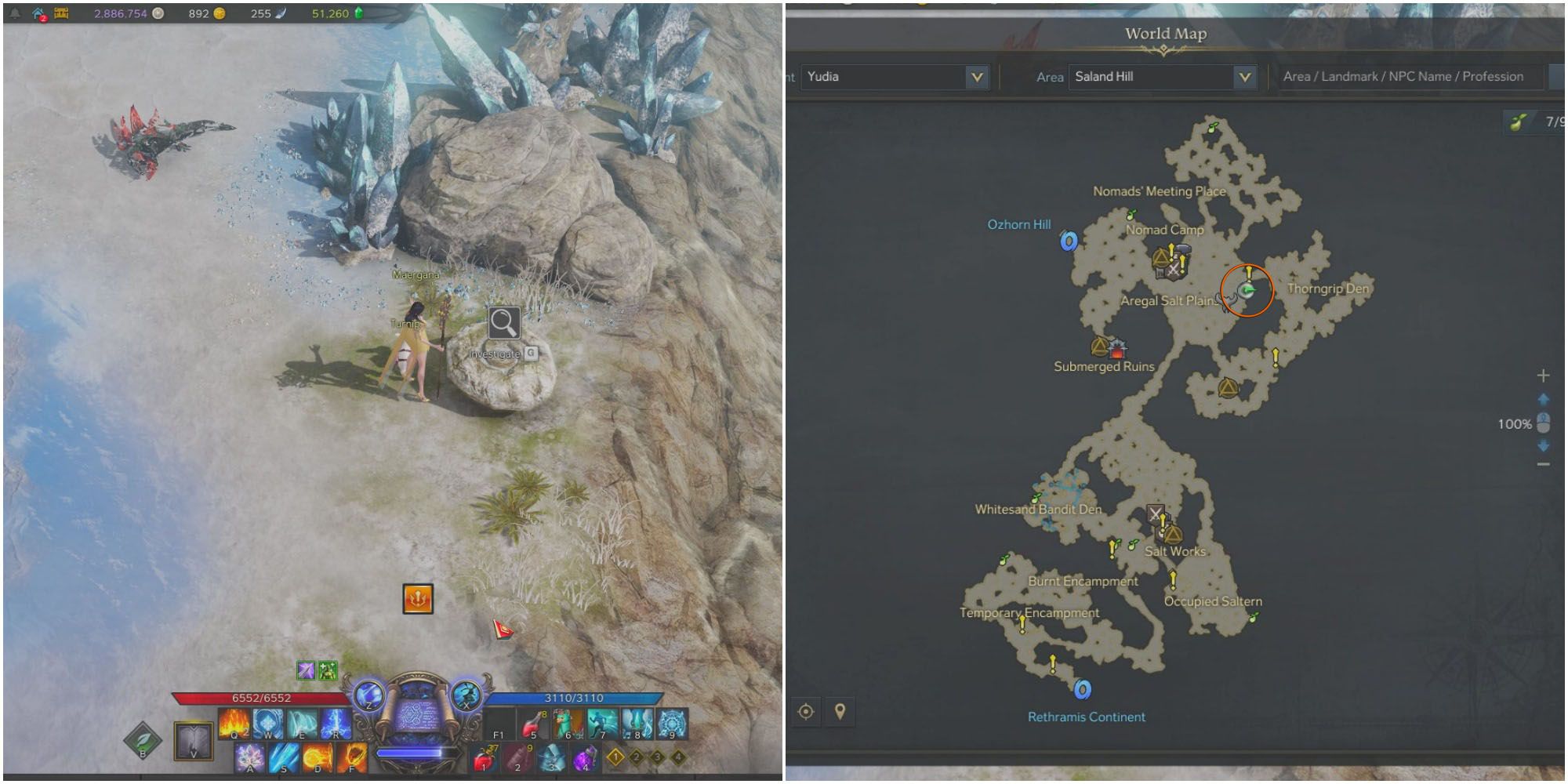 This next Hidden Story is not very far from the Nomad Camp Triport. Exit the camp to the northeast, moving across the salt plains directly across the Salt Giant world boss area.

Once you find the NPC Bahuma, travel south along the wall until you find a strange rounded boulder with a swirl carved into it. Investigating it reveals that this rock is actually the fossil of a giant monster bested by a skilled archer.

3 The Origin Of The Name 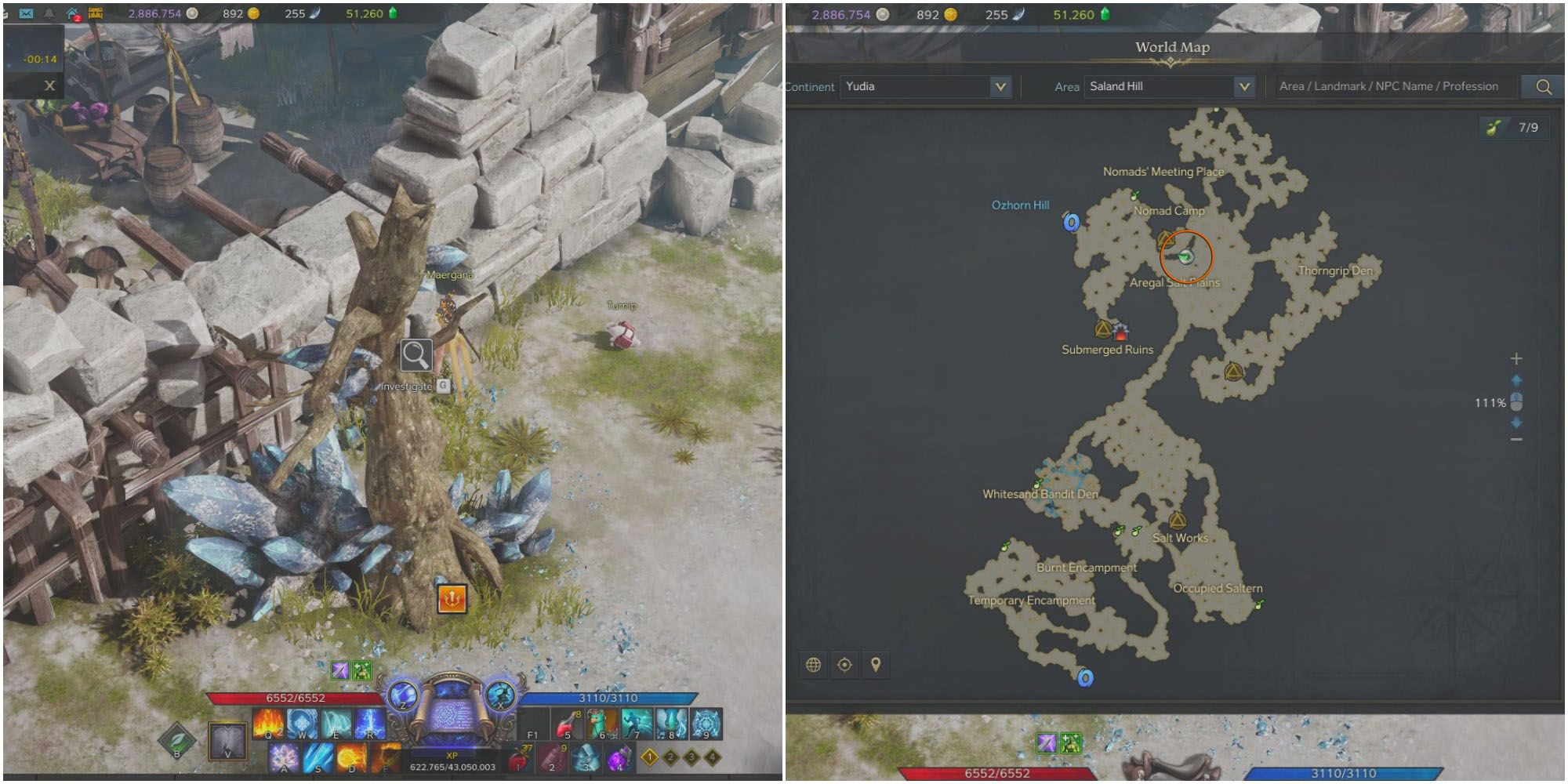 Reading this Hidden Story in the Adventurer's Tome uncovers a nomadic tradition of naming children with rather prophetic meanings. Starting at the Nomad Camp, you can find this Hidden Story very close by. Right outside the southeast camp wall, beneath Cook Hella's merchant stall in fact. 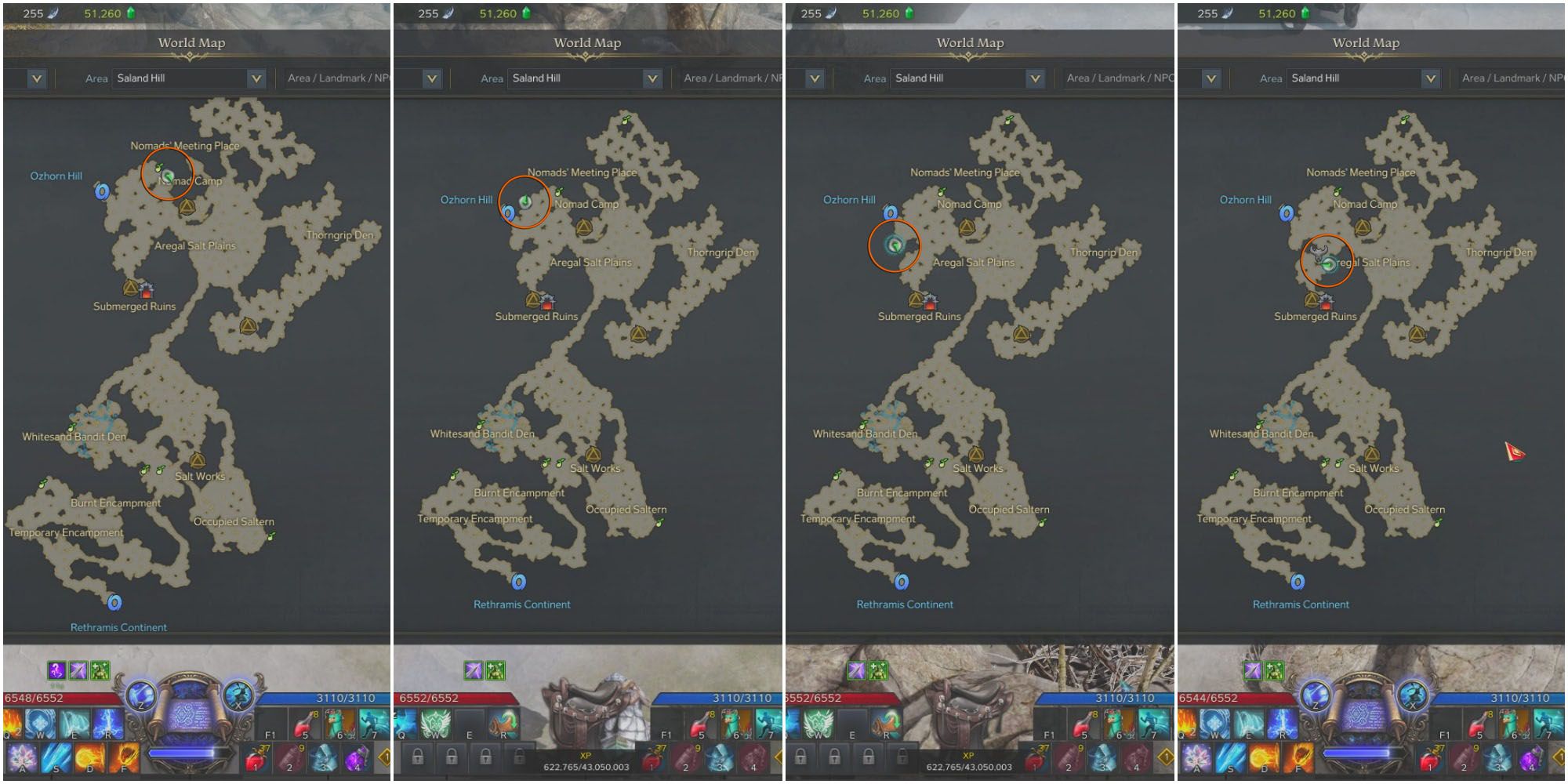 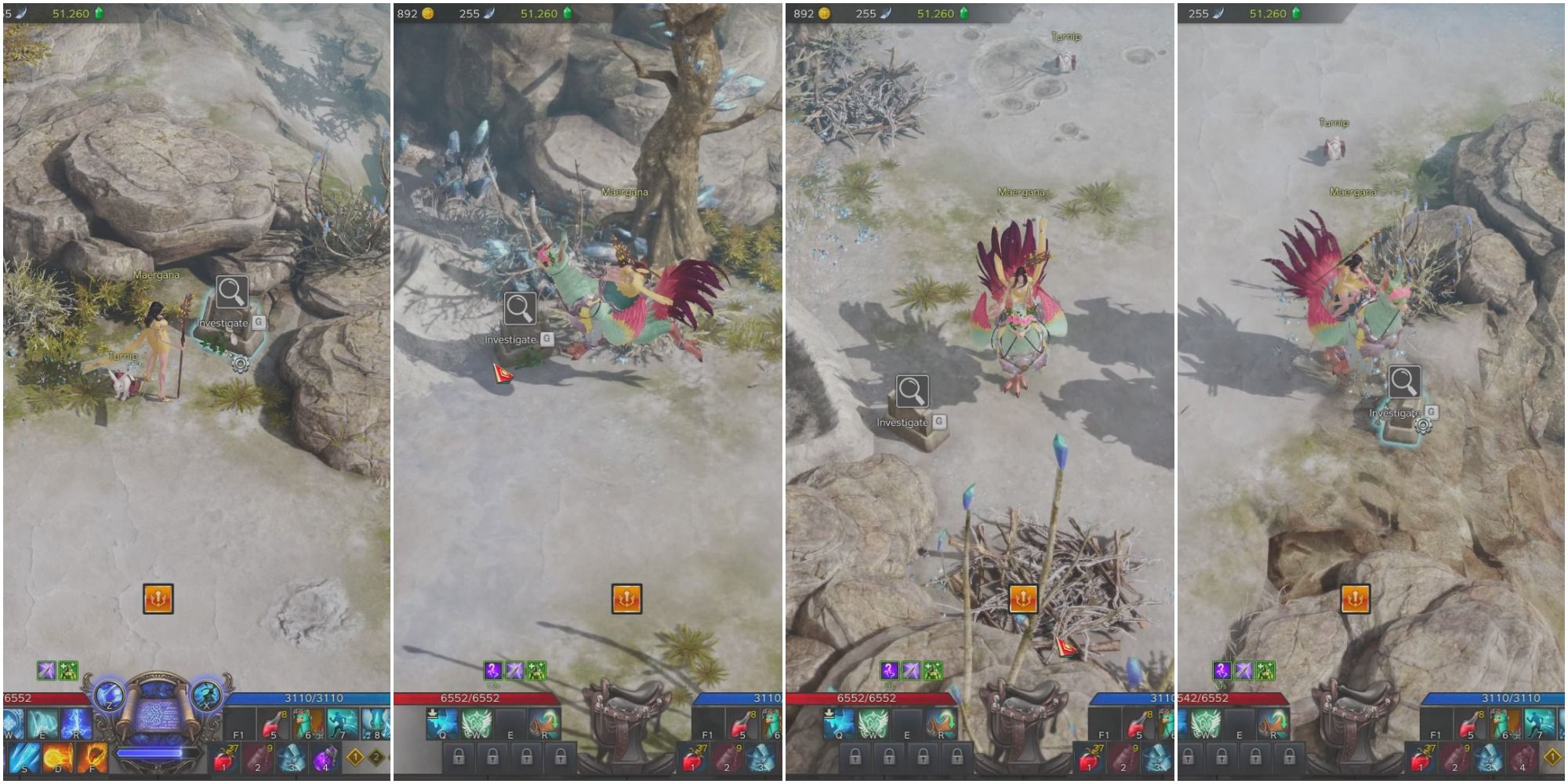 The first headstone is found very close to the Ozhorn Hill entrance, in an alcove just to the southeast of the seventh Saland Hill Mokoko Seed. You may have to kill some Salt Worms to get to it, but it reveals the first lyrics of the Tododo Song.

Move quickly, hugging the northernmost wall of the map. In a little corner beneath a dead tree growing salt crystals, above the Ozhorn Hill entrance, is the second headstone with more lyrics.

Now continue directly south, past the Ozhorn Hill entrance. At the bottom of this alcove, to the right of a saltwater pocket, is the third headstone.

Still moving quickly, proceed as if you were moving towards the Submerged Ruins dungeon entrance, sticking to the right-hand edge of the map here. By the edge of the cliff, you can find the final headstone with the full, very depressing lyrics of the Tododo Song. 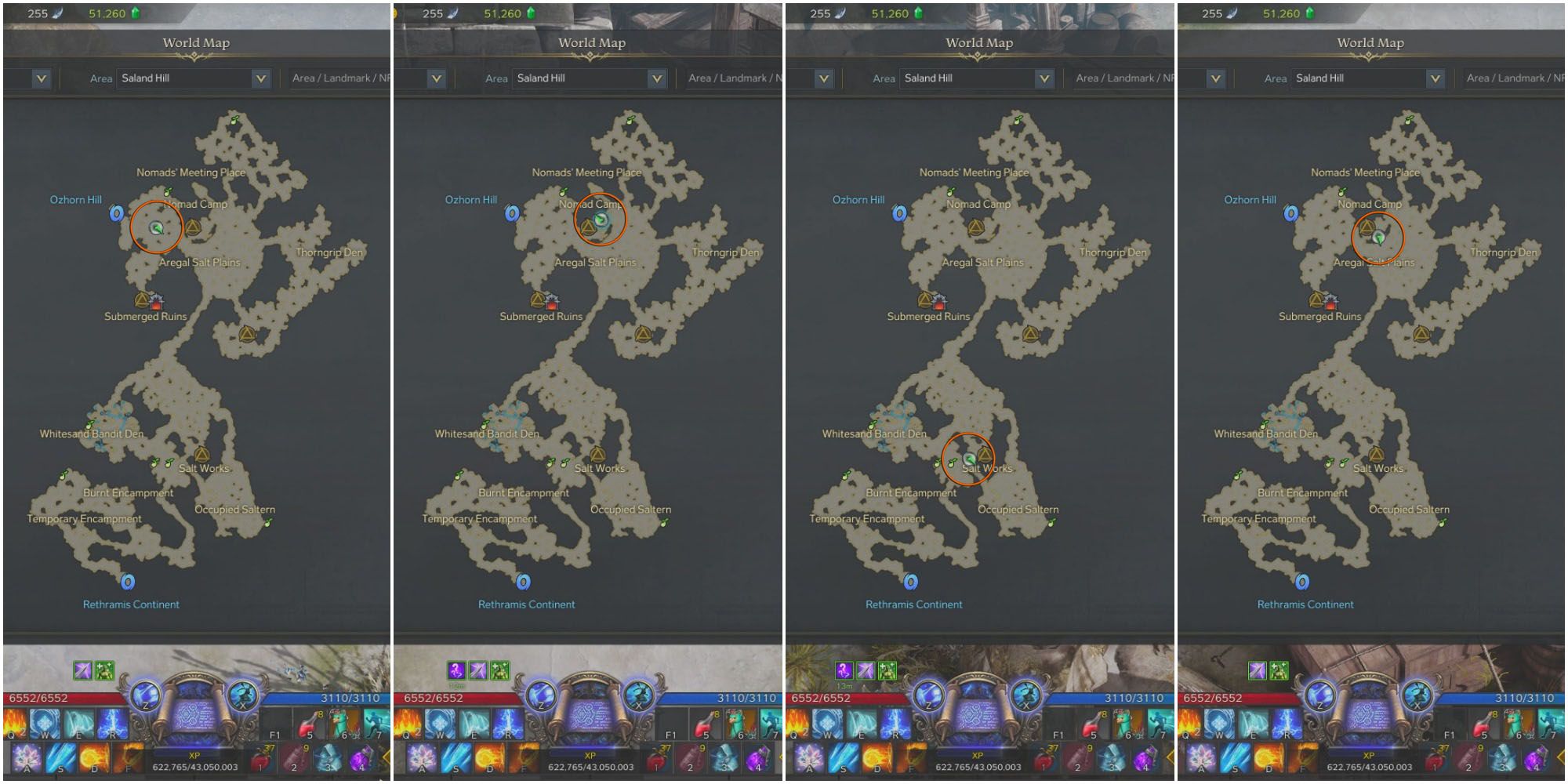 We hope you have a severe sweet tooth because this last Yudia Hidden Story will take you all over Saland Hill to make your very own Solar Salt Candy. 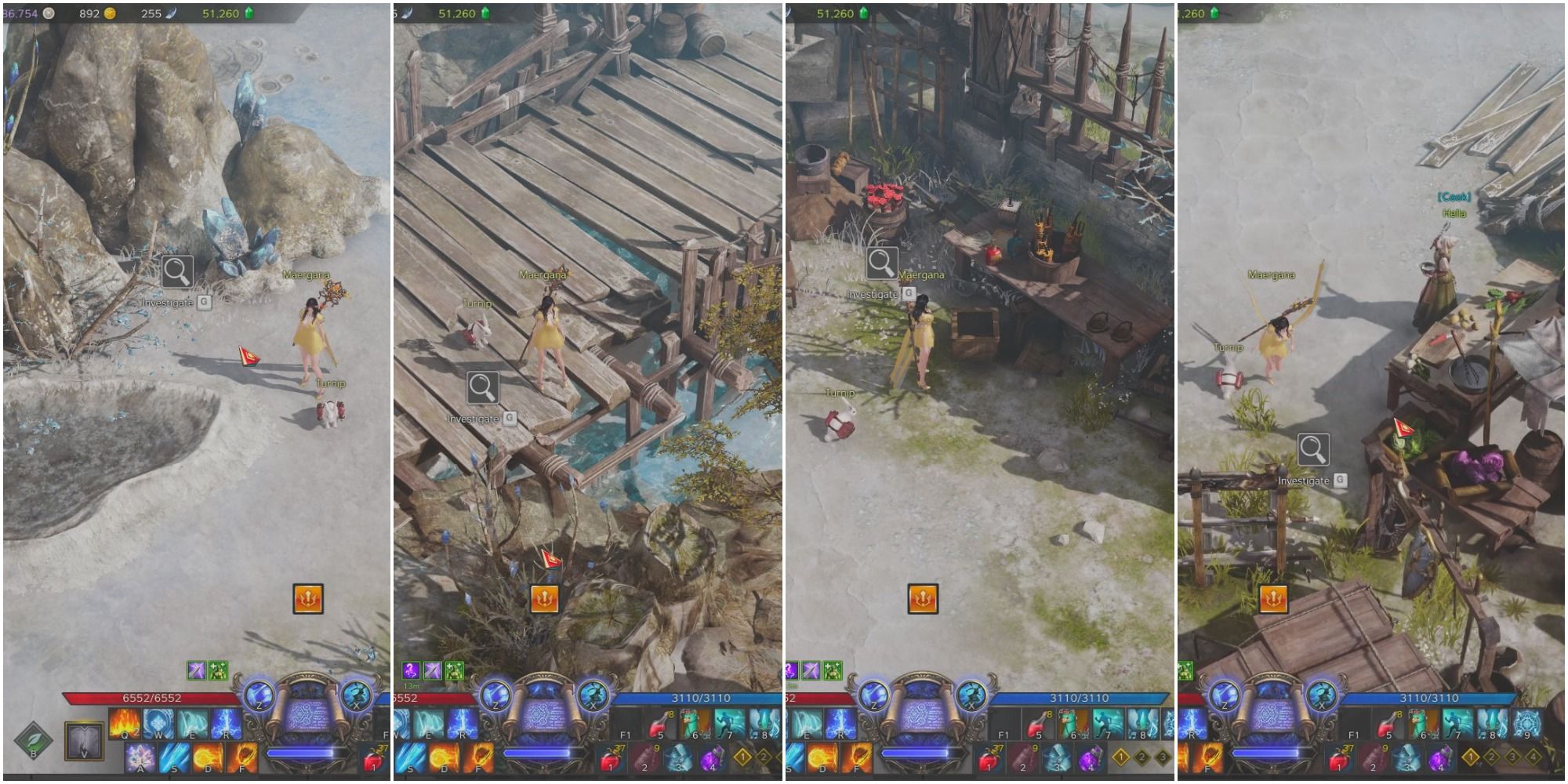 Not far from where you started your quest to learn the Tododo Song lyrics, directly southeast of the Ozhorn Hill entrance is a solar salt deposit growing from a rock formation you can investigate. Doing so harvests some solar salt for the candy.

To find the recipe, head to the Salt Works Triport and head south to the worn-down wooden bridge. Sitting on a plank on the right-hand side is a little red book, but for some reason the recipe is illegible.

To find the intact recipe, travel to the Nomad Camp and move towards the empty vendor stall beside Dairon the Repairer NPC. Just beneath what appears to be a barrel of dynamite is the full solar salt candy recipe.

Now all you need to do is head to the bottom of the Nomad Camp, right between Gear Merchant Armin and Cook Hella to retrieve your very own solar salt candy by the weapons rack. Yum!