Madden football is back with another entry in the storied series. Madden 23 builds upon its predecessor as the premier football simulator on the market. For better or worse, Madden 23 comes equipped with the same modes and gameplay fans are used to. The late John Madden, hall of fame coach and legendary broadcaster, graces the cover for the final time after he passed away at the age of 85.

As satisfying as it might be to shut down opposing teams with a suffocating defense, it’s a bit more fun to run up the scoreboard. In today’s NFL, a dynamic offense can carry a team to great heights, just look at the Kansas City Chiefs who won the Super Bowl in 2020 thanks to its offense. While the quarterback position is the most important in football, some might argue the quarterback is only as good as his wide receivers. Let’s take a look at which star abilities for receivers are the cream of the crop. 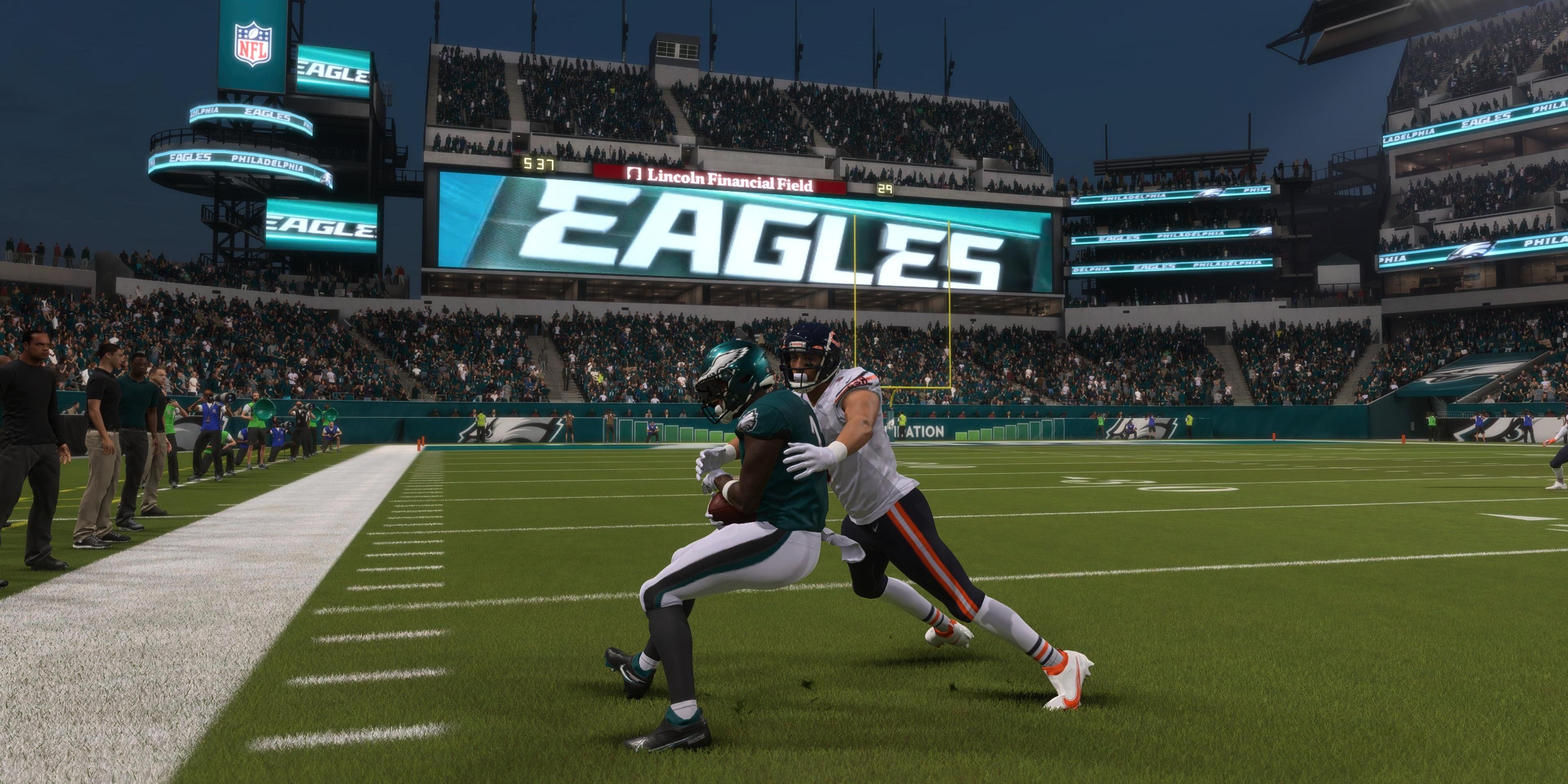 Not all passing plays have to result in gaining over half the field. Some plays are only good enough for a few yards, equivalent to running the ball. If the defense throws a blitz at you, these shorter pass plays are a quarterback’s best friend.

The Short Out Elite ability boosts receivers to catch more passes outside the numbers consistently less than ten yards from the line of scrimmage. Receivers with this ability pair well with quarterbacks with the Sideline Deadeye ability that increases their accuracy on passes toward the sideline. You might think throwing for less than ten yards isn’t worth it, but a positive play, no matter how small it is, still moves you forward. 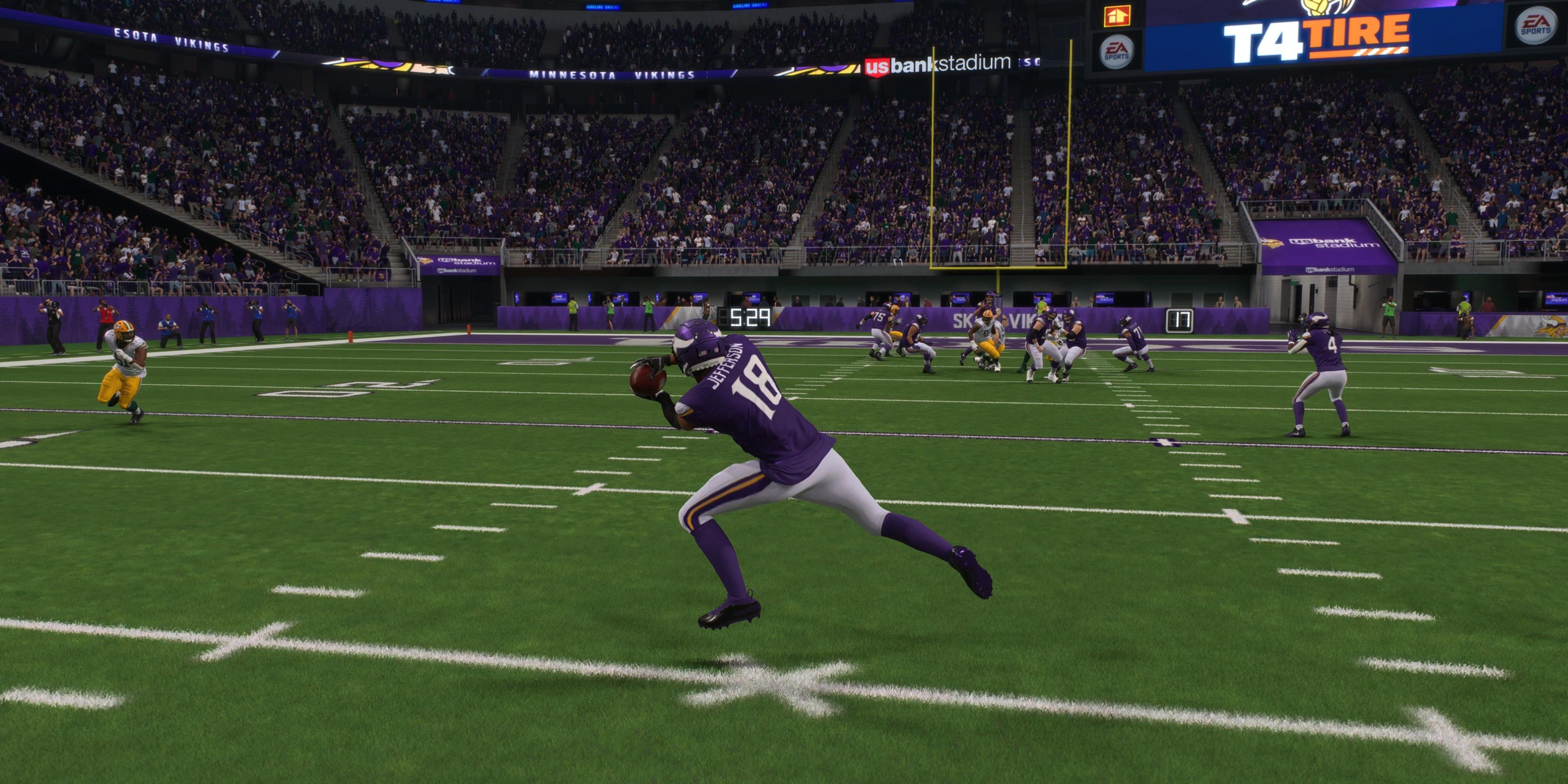 You might be thinking the Short In Elite ability is similar to the Short Out Elite ability and you’d be correct. Typically, it’s a bit more difficult for some quarterbacks to deliver a pass outside the numbers, so that makes the middle of the field more appealing. Justin Jefferson excels at short routes in the middle of the field to gain crucial yards to move the chains.

Receivers like Jefferson catch passes more consistently inside the numbers from the line scrimmage with the Short In Elite ability. Depending on which offensive scheme you’re using, slant routes are the most common and effective short routes to utilize as a wide receiver. It’s nearly impossible for a defender to cover a slant route, especially if the receiver has a quick release off the line of scrimmage. 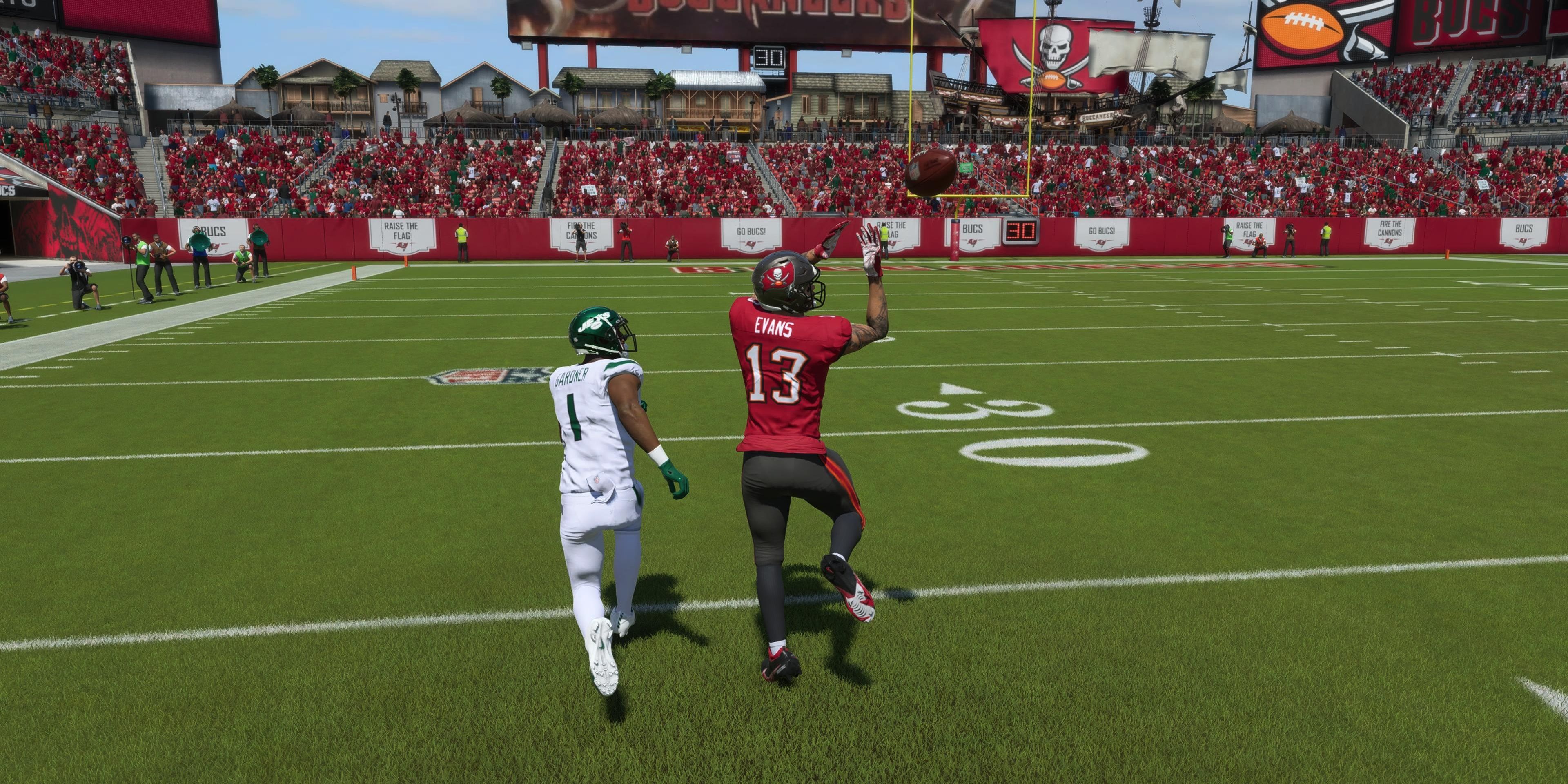 Offenses that can stretch the field and push defenses to the limit are truly dangerous. Having receivers who can quickly get off the line and dig into a deep route will make any quarterback happy. Elite receivers with the Deep Out Elite ability are capable of causing havoc deep in the secondary.

Why did Tom Brady decide to join the Tampa Bay Buccaneers? Because of receivers like Mike Evans. With the Deep Out Elite ability, Evans consistently completes receptions outside the numbers more than 20 yards from the line of scrimmage. In a two-minute drill, utilizing the sidelines is key to driving downfield without wasting too much time. 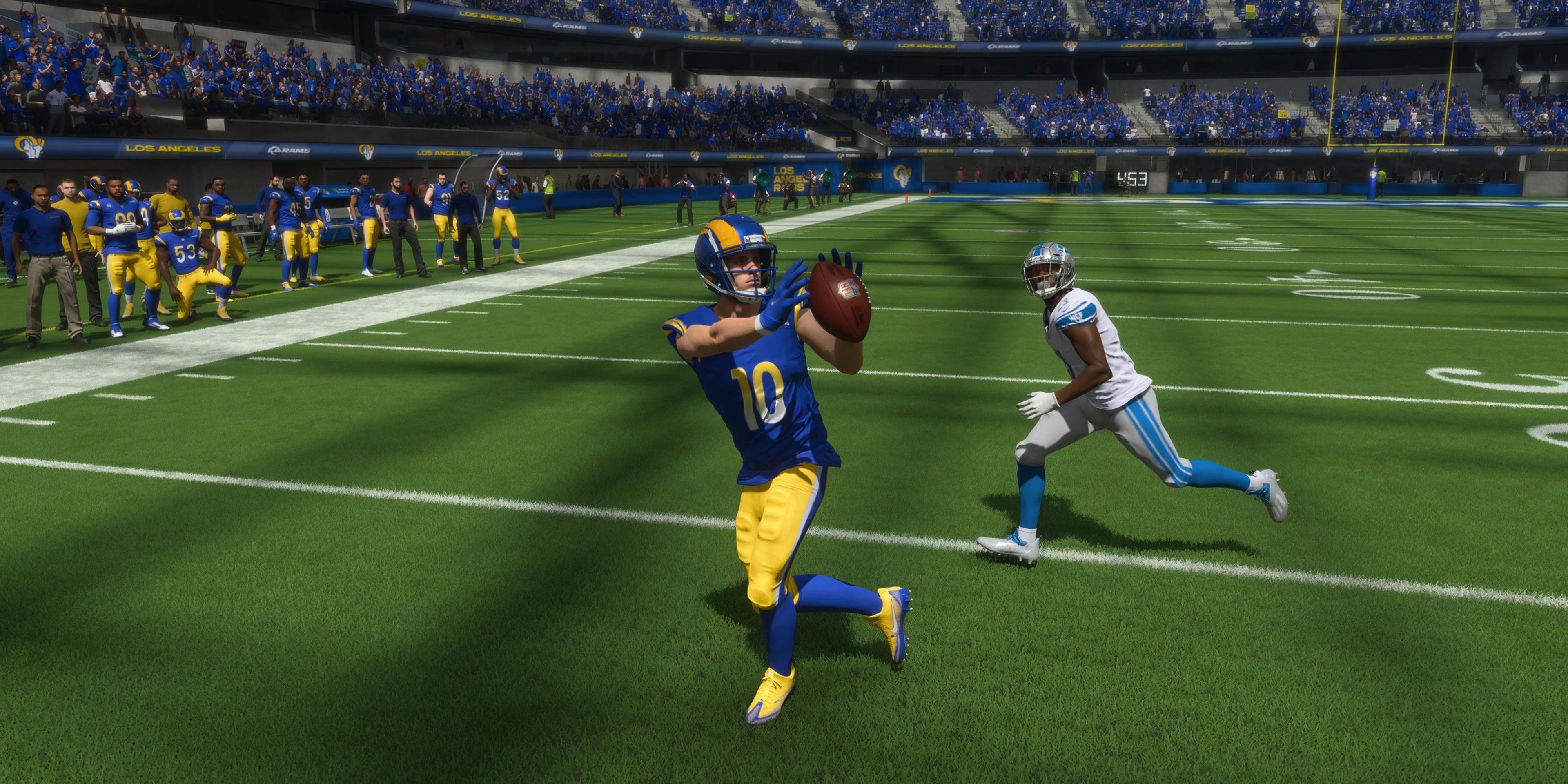 Having players who can enter the zone is a major boost to your football team, but what’s even better is players who can sustain it for long periods. Think about how much of a buzz kill it is to enter the zone only to be knocked out of it faster than it took to attain it. That’s where the Persistent ability comes into play.

Receivers who are endowed with the Persistent ability are harder to knock out of the zone. Now, this ability isn’t useful for any old receiver, it must be utilized by a player with a Superstar X-Factor like Cooper Kupp. Having a player of Kupp’s caliber will elevate your team to new heights, simply because the Persistent ability is meant to benefit the team by remaining in the zone for a longer period. 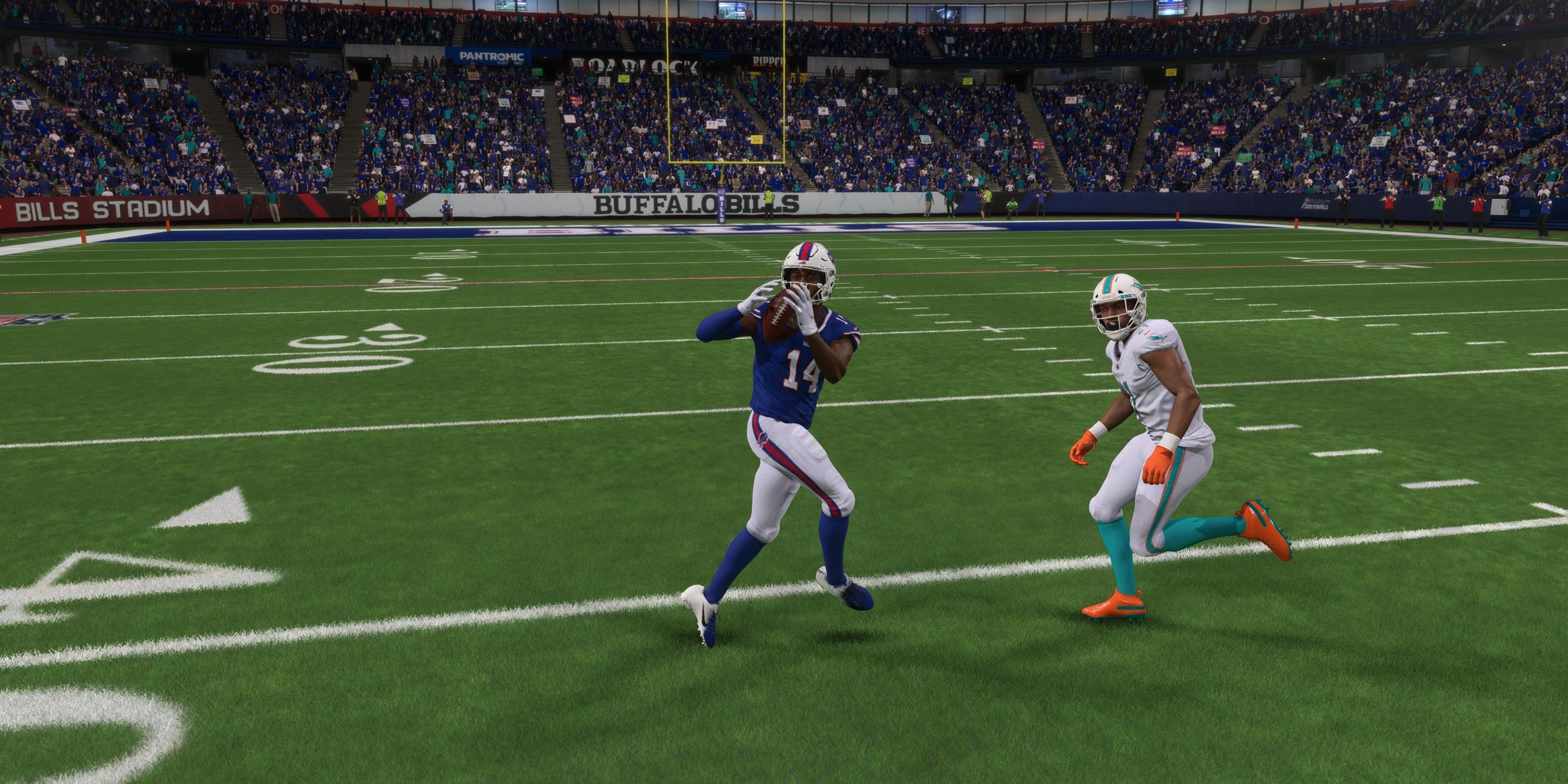 Defensive coordinators incorporate both man-to-man and zone schemes trying to stifle opposing offenses. Attacking man coverage involves quick releases from the line of scrimmage and sure hands to beat your defender. Zone coverage, on the other hand, might have large gaps where receivers can do their damage.

The Deep In Elite ability allows receivers to catch passes over 20 yards more consistently inside the numbers. The middle of the field, especially against zone defenses, can be exploited easily by skilled receivers like Stefon Diggs with this ability. Deep In Elite is for players who risk shots downfield to move the chains. 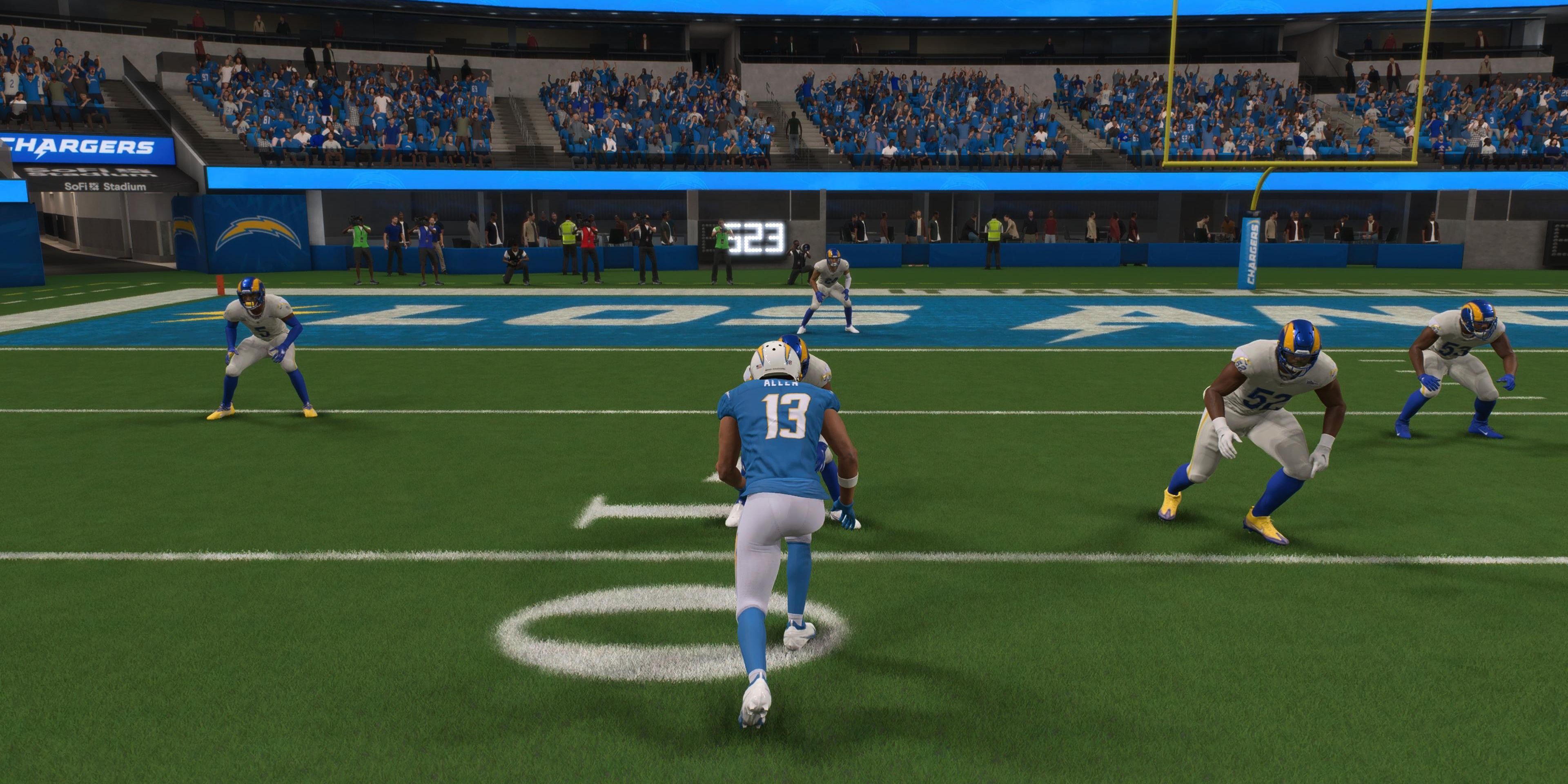 Up until 1960, there wasn’t a slot receiver position in NFL offenses. Teams utilized two outside receivers and a tight end. But since the position was introduced, slot receivers have evolved into some of the most dangerous players on the field.

Receivers like Cooper Kupp and Keenan Allen have made a living operating from the slot. These receivers aren’t necessarily the fastest or biggest catchers on their teams, but they have reliable hands and are incredible route runners. Receivers with the Slot-O-Matic have better hands catching passes less than ten yards and make faster cuts in their routes. Quarterbacks look to these receivers to pick up a quick few yards and hope they turn the short pass into a big gain. 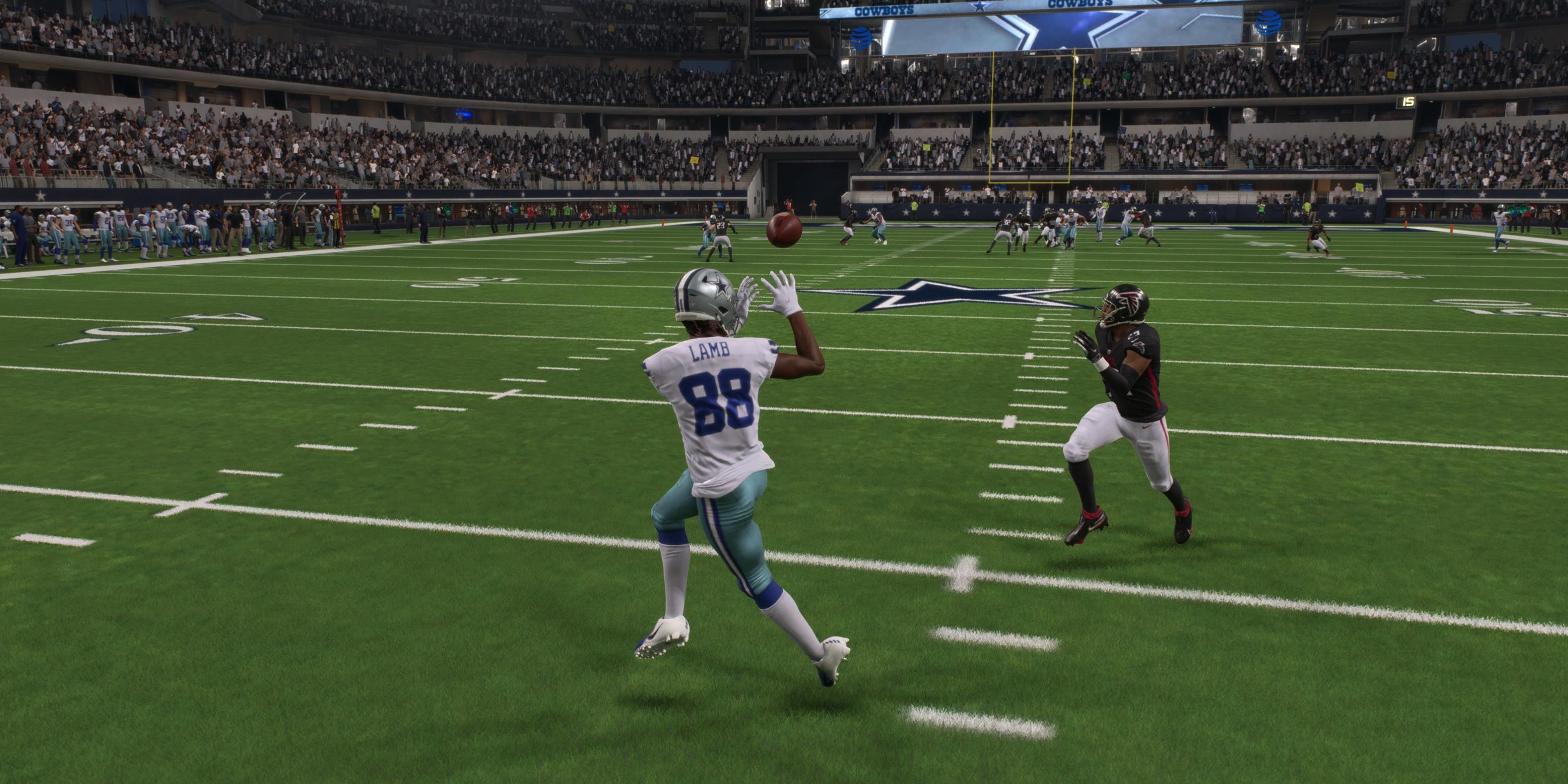 Typically, receivers are guarded by cornerbacks or even safeties if they manage to get deep into the secondary. But on the off chance, receivers might find themselves being defended by linebackers or linemen because of a defensive breakdown or a spread offense. Either way, this situation is a defensive coordinator’s worst nightmare.

The Matchup Nightmare ability boosts how fast receivers make cuts and they’re able to frequently win contested catches against linemen and linebackers. Make defenses pay by finding the mismatch at the line of scrimmage and watch your receiver leave their defender in the dust. 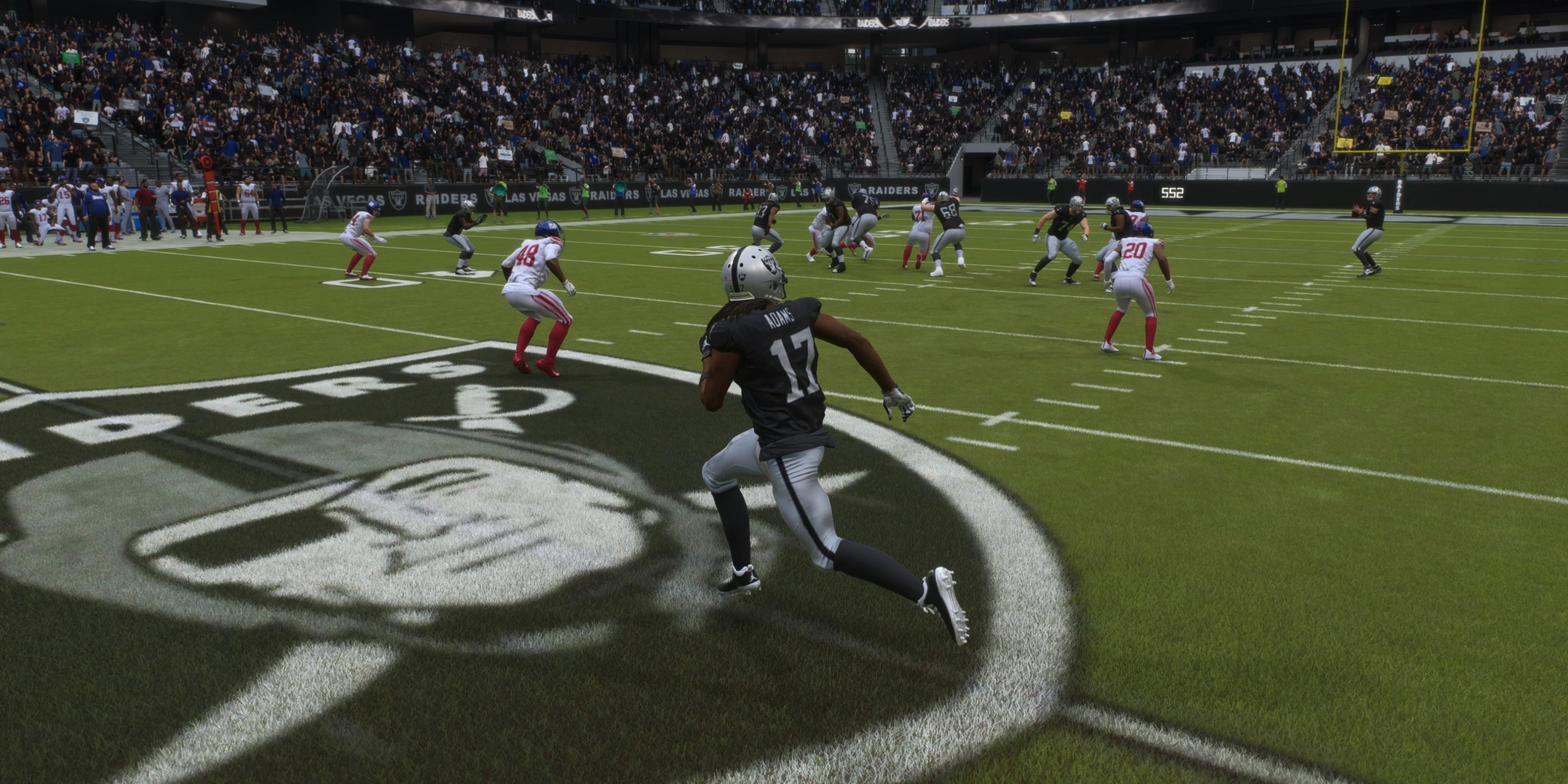 Talented receivers can rely on their explosive speed or aggressive hands to win their matchup against defenders, but at the end of the day, a receiver is only as good as their route running. Being on the same page with your quarterback and following the route to a tee will limit costly errors that could result in turnovers.

There’s a reason why Davante Adams is the highest-rated receiver in Madden 23 and it’s all because of his route running. Sure, Adams has developed incredible hands, but the Route Technician ability gives him an extra boost in creating separation on the last cut of his route. Now, if it’s a deep route, you better hope the offensive line can hold the pocket long enough. 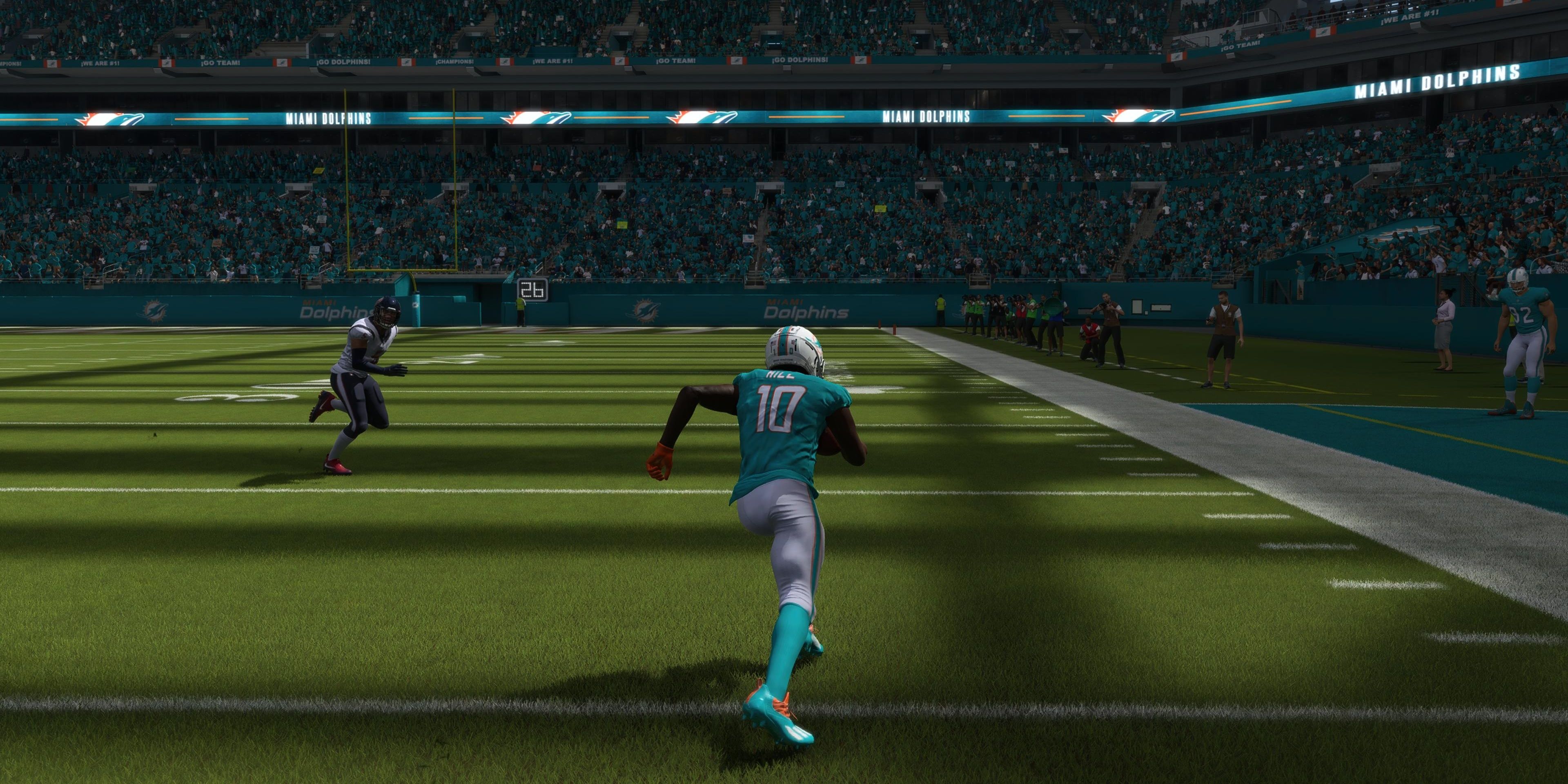 Most receivers are concerned with simply completing the reception and ensuring a positive play for the offense. However, there are a select few who risk it for the biscuit and try to stretch the play as far as possible. Receivers who excel in running after the catch (RAC) are premier athletes like Tyreek Hill and Stefon Diggs.

With the Grab-N-Go ability, these receivers can quickly change direction, shift their momentum, and run up the field without slowing down. Being able to immediately turn your attention up to the field at full speed once you become a ball carrier is a luxury most teams don’t have in the NFL. 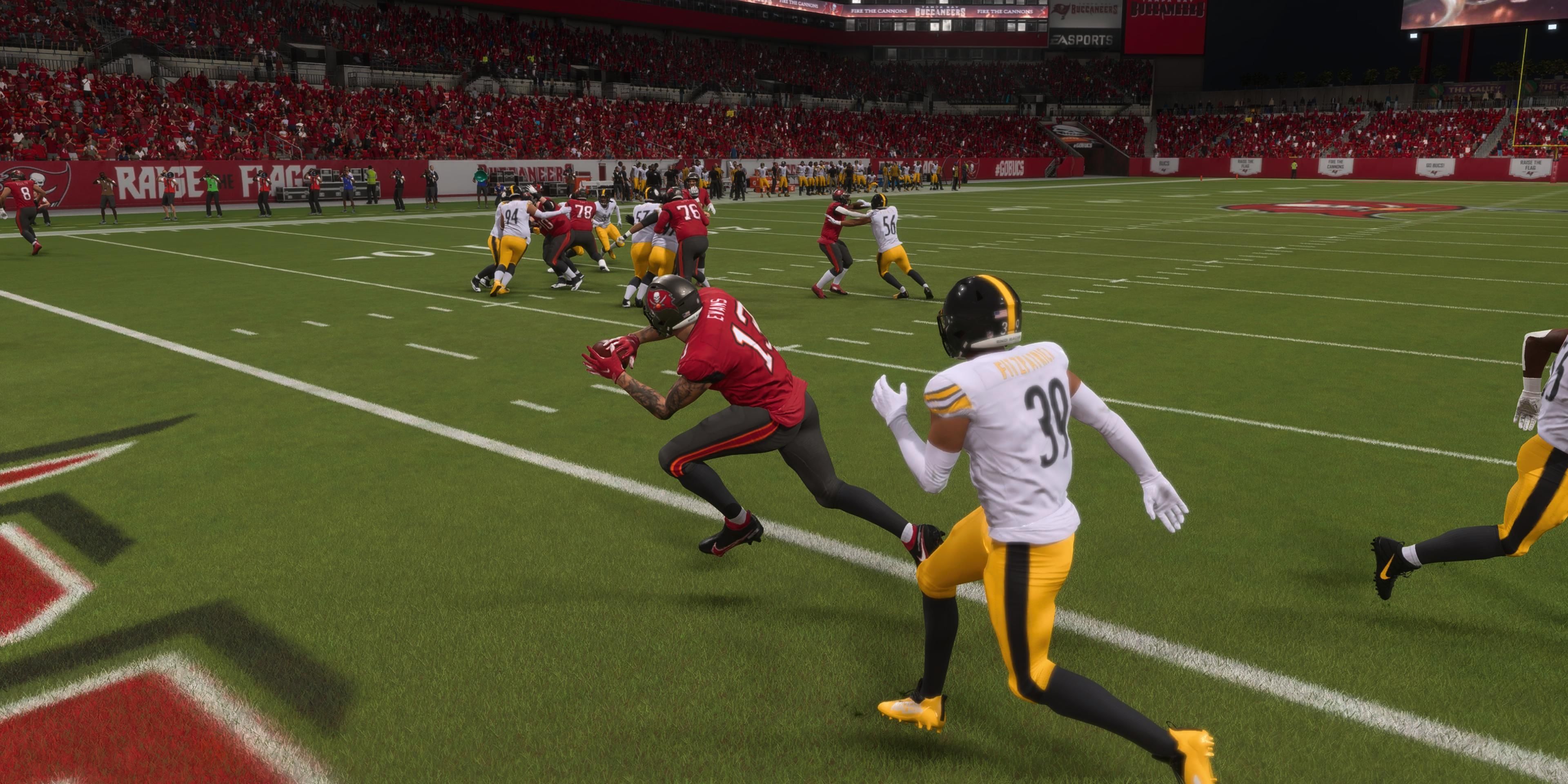 Once you arrive at the opposing 20-yard line, you’ve entered the red zone. Your window of success shrinks with the size of the field, as defenses clamp down in the secondary. Teams need players who are threats to capitalize specifically in the red zone.

Three of the best receivers in the game are specialists when it comes to scoring in the red zone. Davante Adams and Cooper Kupp have arguably the best hands in the NFL, while Mike Evans simply jumps higher than most defenders with his 6’5 body frame. Regardless of how they win their matchups, these Red Zone Threats have a better chance of winning contested catches against single coverage in the red zone. With how difficult it can be to score in the red zone, it’s no question the best star ability to have as a receiver in Madden 23 is Red Zone Threat.