Liara makes her grand return in Mass Effect 2, albeit in the form of lackluster little quests that don’t amount to all that much. That is unless you have Lair of the Shadow Broker purchased and installed, a DLC that, for those playing the remaster, is already active.

If you romanced Liara in the first game, you’ll even get some unique tidbits. Otherwise, get ready for a mostly platonic romp to topple a crime lord clad with goons and large-scale set pieces that require you to bring an arsenal with some gusto.

When you arrive at the planet Ilium, the first thing you’re going to want to do is to visit Liara’s office where you can give her information on the Shadow Broker from Cerberus. This will kick the questline into motion.

Following this interaction, she’ll head off home. If you need information on Samara or Thane, it can be found at her terminal while she’s absent. Meanwhile, you’ll want to head over to the taxi stand in southern Ilium where you can follow her to the location aptly titled Liara’s Apartment. 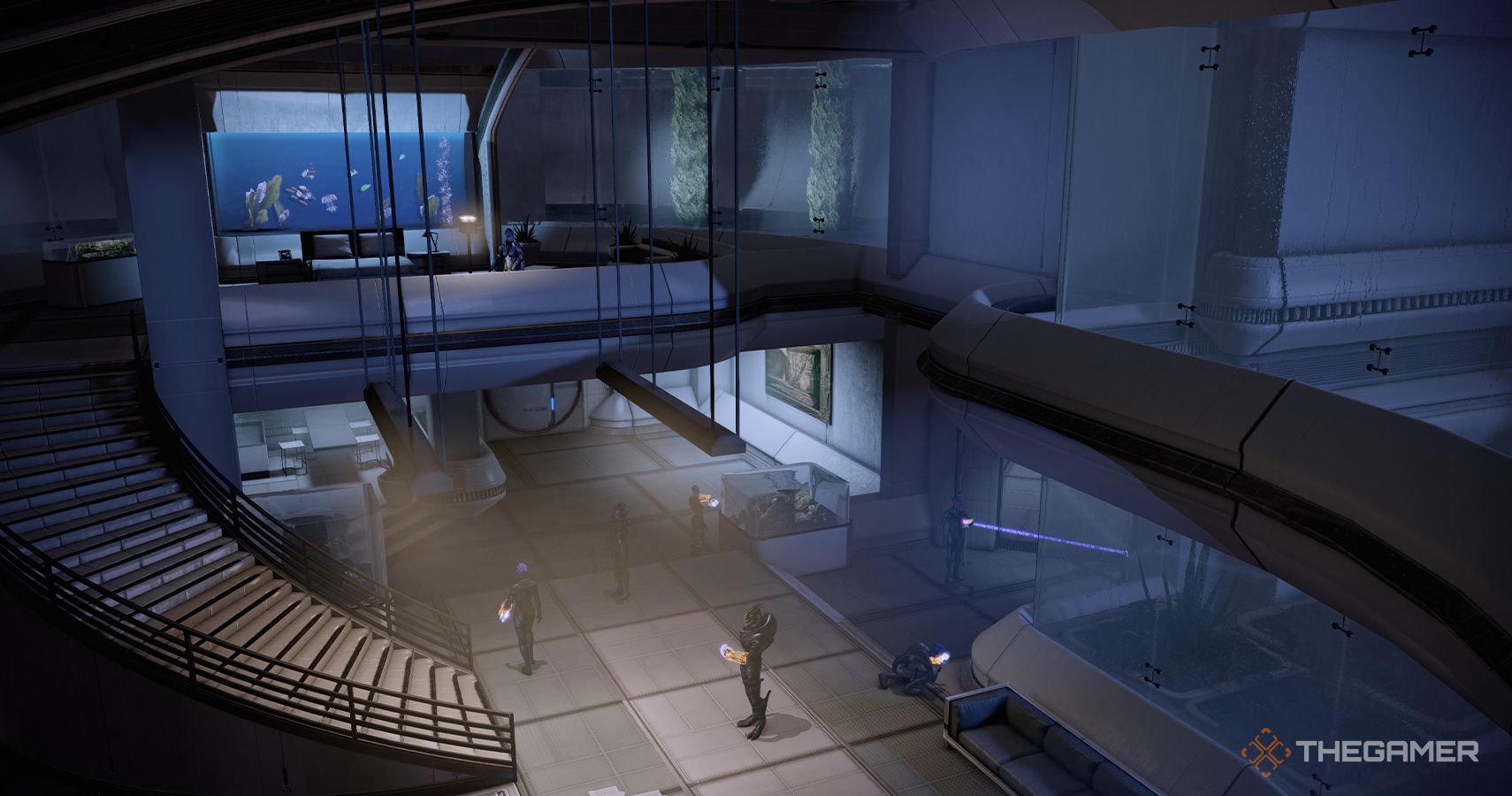 Low and behold – Liara’s apartment is a crime scene. Cops are everywhere, but you’ll meet Tela Vasir, a fellow Spectre, and she’ll let you in so that the two of you can investigate to find out just where Liara has gone.

Tip: Garrus, being an ex-cop and now-vigilante, is a decent pick to bring here, and he’ll even sport some unique interactions later on in the mission. 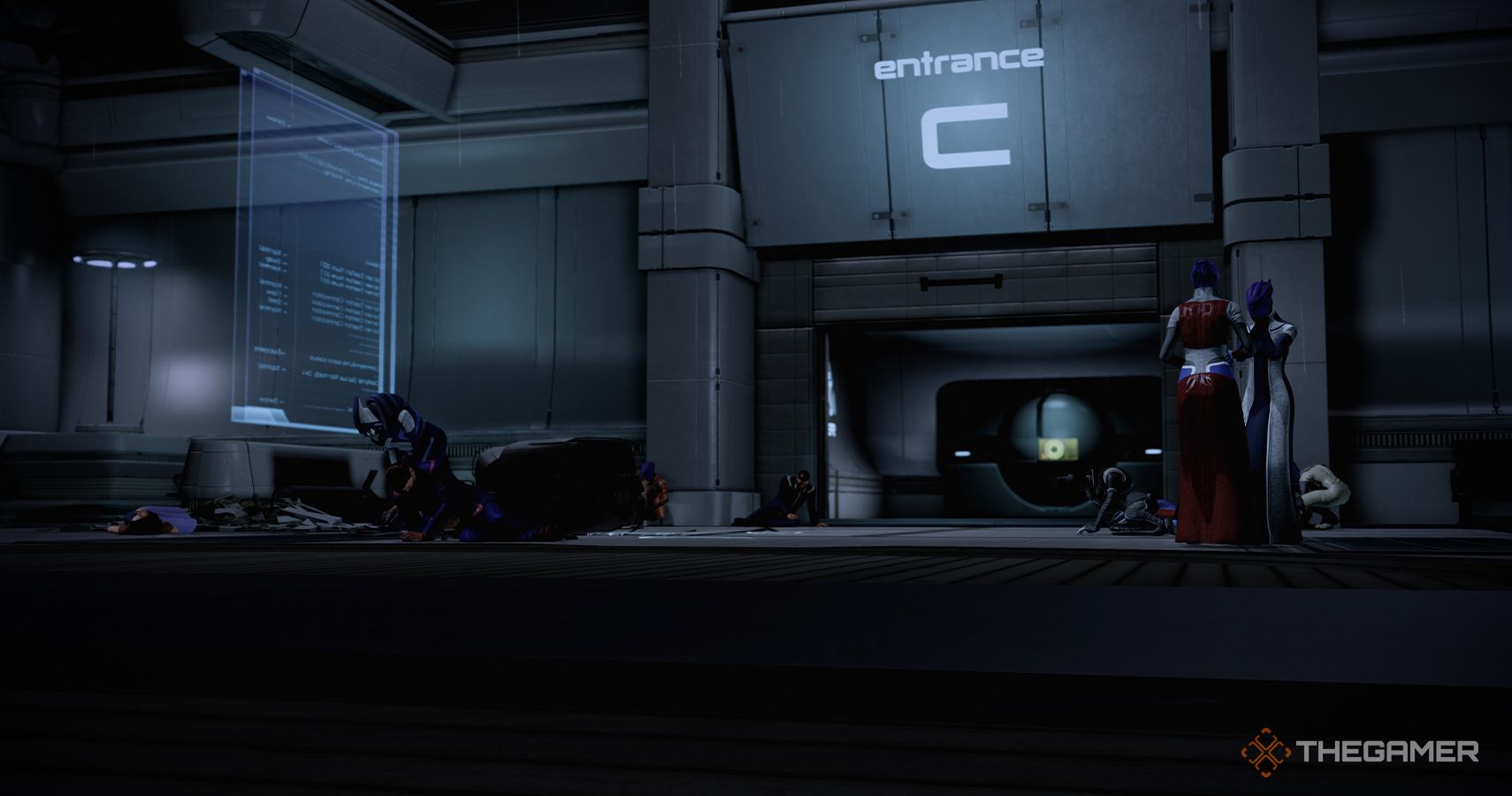 Now, you’ll be at a building that’s blown up simply because Shephard showed up. It’s not exactly the warmest welcome, at least figuratively speaking. Head inside, and take a right for 3,750 credits in a locker nestled by the stairs.

Head up these once you’ve nabbed the money, and you’ll see a medical station and a PDA outside the Salarians’ Embassy that has 2,500 credits. Head up to the top of the stairs where you can find an ATM with 6,500 credits inside. You just have to hack it. Turn right, and at the dead-end will be some power cells.

Take the opposite route and you’ll engage in the first fight against the Shadow Broker’s private army. Once you’ve taken them out, you can find 1,500 credits, 1,000 element zero, and, in the wrecked office, a terminal with 3,000 credits.

Put out the fire by taking a left just before the stairs. There’s an interactable here that does so. Now, having gone up them, you’ll be bombarded with yet another onslaught of goons so get to cover and start returning the favor. 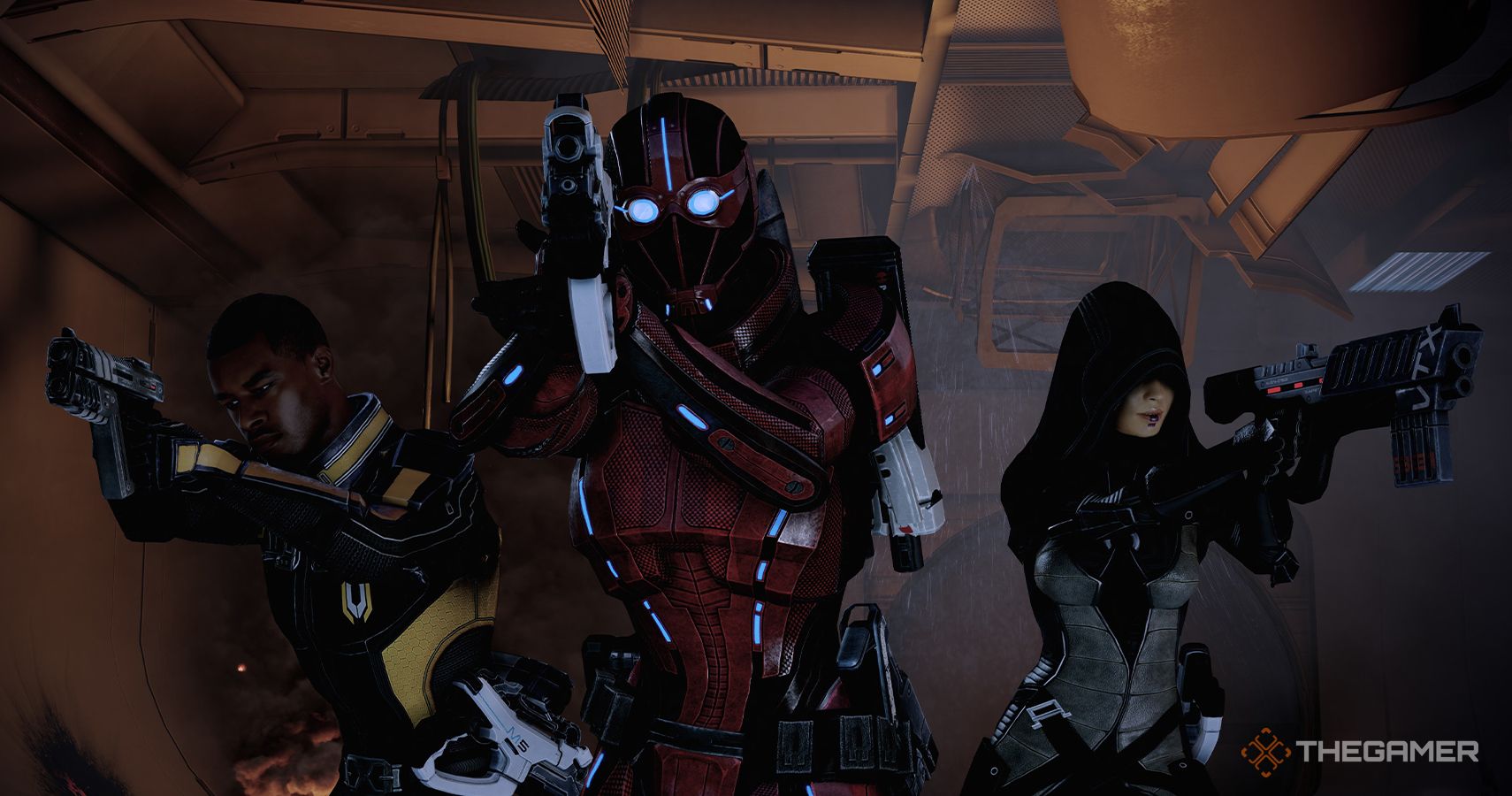 Once you’ve dealt with that lot, you can inspect a research terminal for a Heavy Pistol Damage upgrade while also netting yourself 5,000 credits from the wall safe. The door leads you to Vasir where you’ll also bump heads with Liara and discover that the Spectre has been working for the Shadow Broker this whole time, toying with you.

The two will embark on a superpowered chase while mercs sprawl out from elevators like a cockroach infestation, and that’s your cue to get into the thick of the gunfight before going after them. Once you catch up, you’ll get into a taxi and begin a car chase of sorts. 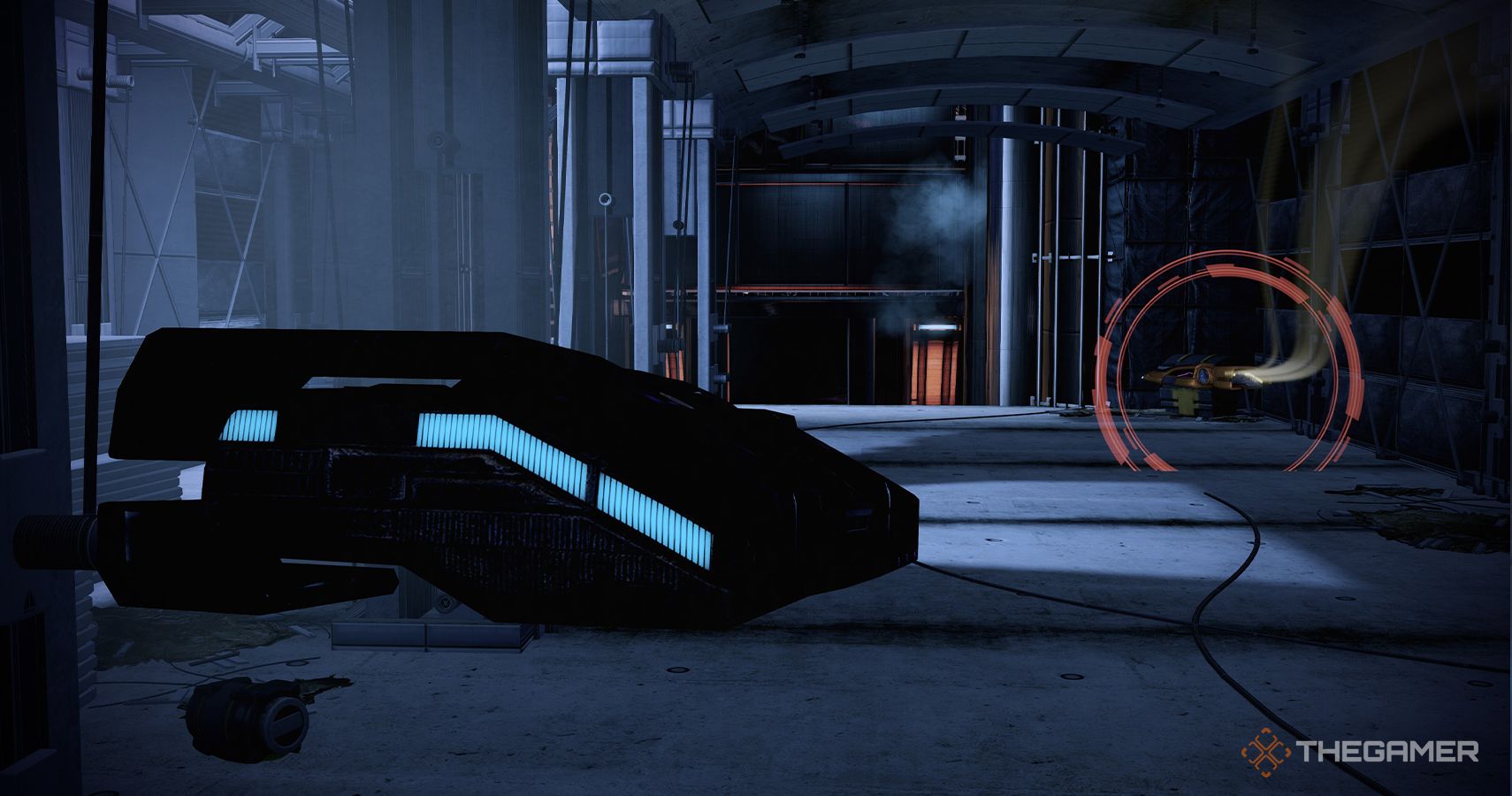 This ‘chase’ isn’t really a chase. In actuality, you just need to keep Vasir in sight until you reach the end. Keep the accelerator pressed down, and don’t be afraid to take damage – it’s pretty hard to die here.

All you need to do is ensure Vasir stays in range, and eventually, you’ll reach a point where she fumbles and crashes, leading to the next set-piece with even more mercs to mow down. 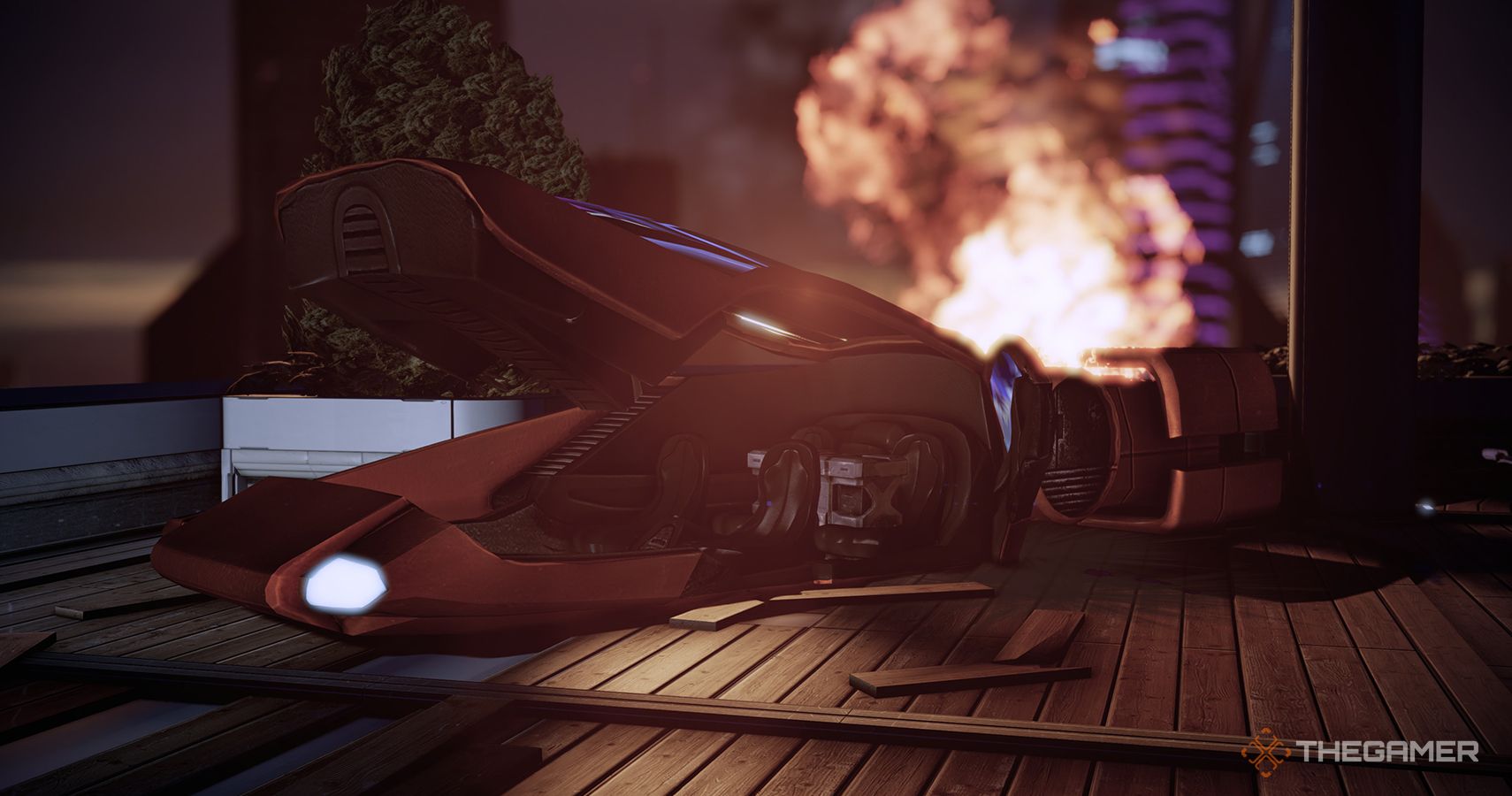 Here, you’ll be fighting wave after wave of Shadow Broker goons who are dropped in at different points in the parking lot. Ensure you stick behind cover and don’t let them flank you.

After the fight is over, you can access a bank terminal with 1,500 credits and, when heading to the crashed car on the left side facing the buildings, you can enter a hotel room with a wall safe. Before entering, circle around to find the crashed car. You’ll be able to grab yourself a Damage Protection upgrade.

The second hotel room has a personal datapad with 2,000 credits and a bedroom with a loadout station. You can swap out Liara’s guns now, and even fiddle with your own if need be.

Tip: You can upgrade Liara’s powers since she’s now a part of your squad. This should make things a touch easier. We recommend maxing out Singularity. 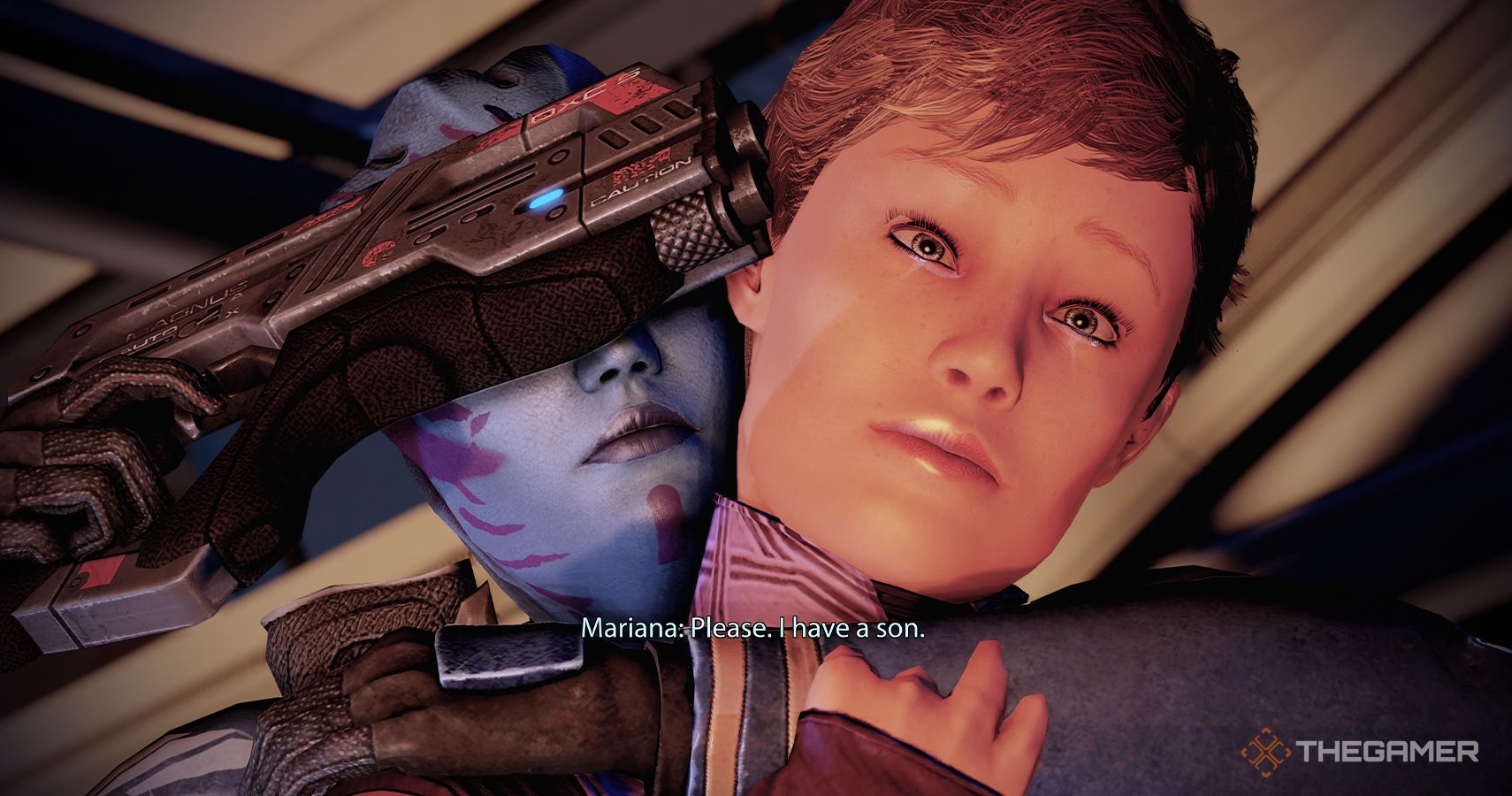 Press forward and you’ll catch up with Vasir. She takes a hostage. Now, if your Renegade and Paragon points are high enough, you can save the hostage. Either way, get through the dialog and you’ll end up with a boss fight, another Spectre. Saren was tough, but Vasir has Shockwave and Charge, making the whole ordeal feel like a fight with another player.

Throughout this battle, Vasir will call reinforcements and hide up on the rooftop, so be ready to take on turrets and engineers. Plow on, defeat her, and retrieve Dakat’s datapad which holds the location of the Shadow Broker. Following this, you’ll be automatically flown there to partake in the next part of the quest. 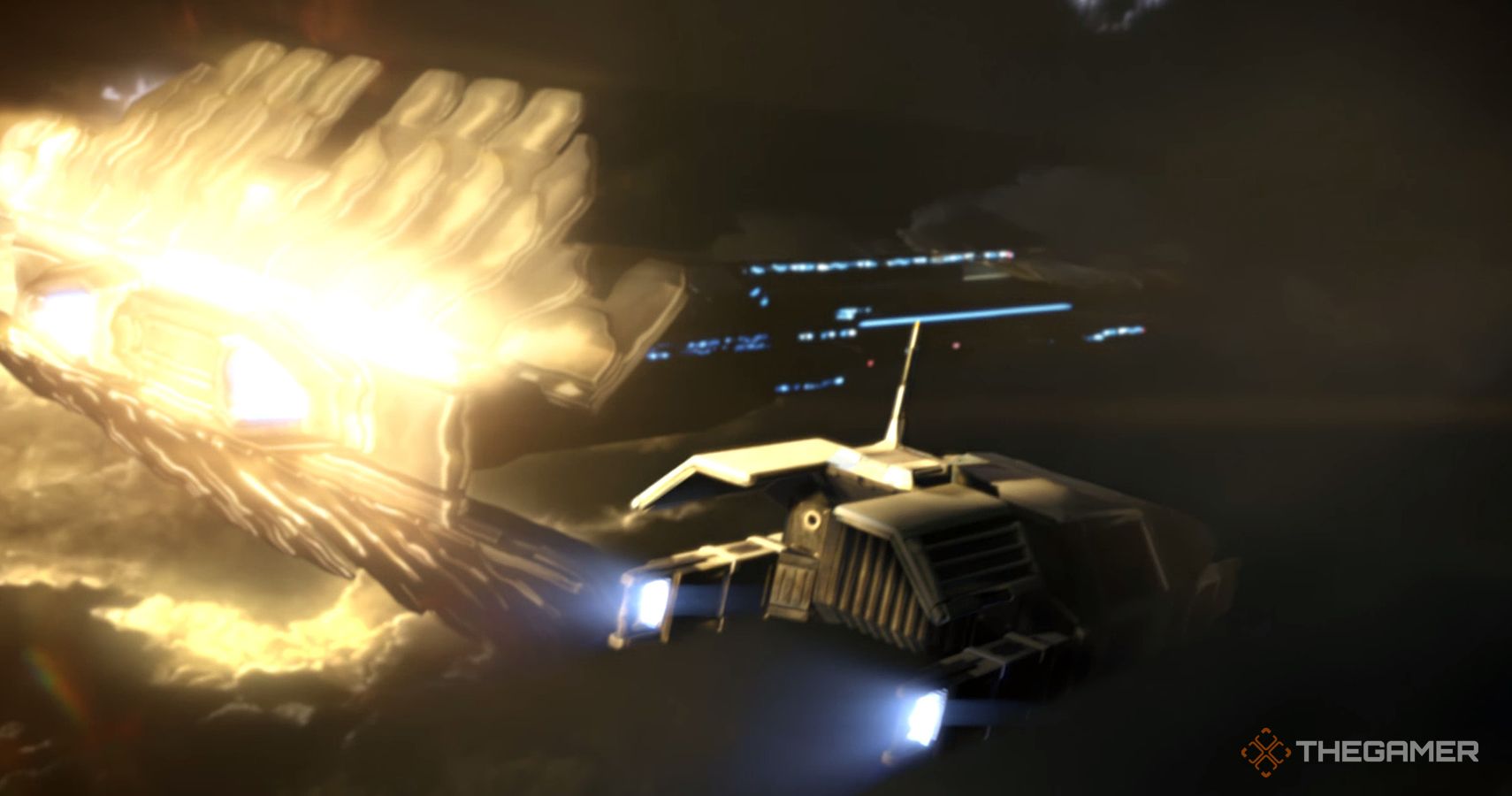 This entire section is essentially a long-winded corridor fight in the midst of an ongoing storm that sends enemies hurtling into the unknown when strung up by Shephard’s powerset. It’s reminiscent of the original Mass Effect’s ending, and there’s not much to it other than going in a straight line.

Eventually, you’ll arrive at the entrance hatch that Liara plants a hacking device on. Shephard will make a comment that they miss the good ol’ days when you could just omni-gel everything, a cheeky nod to the first game. Defend the hatch against a few waves of enemies until it’s open.

You’ll fight engineers, rocket drones, vanguards, mechs, and mercenaries. Be sure to keep an eye out for what side they’re coming from as they don’t attack from more than one, so it’s fairly easy to stick behind cover and take them out as per usual.

Tip: There are electric pads that can be shot which let out a large spiked current, damaging nearby enemies. Be warned, though, as they can also hurt you and your allies. 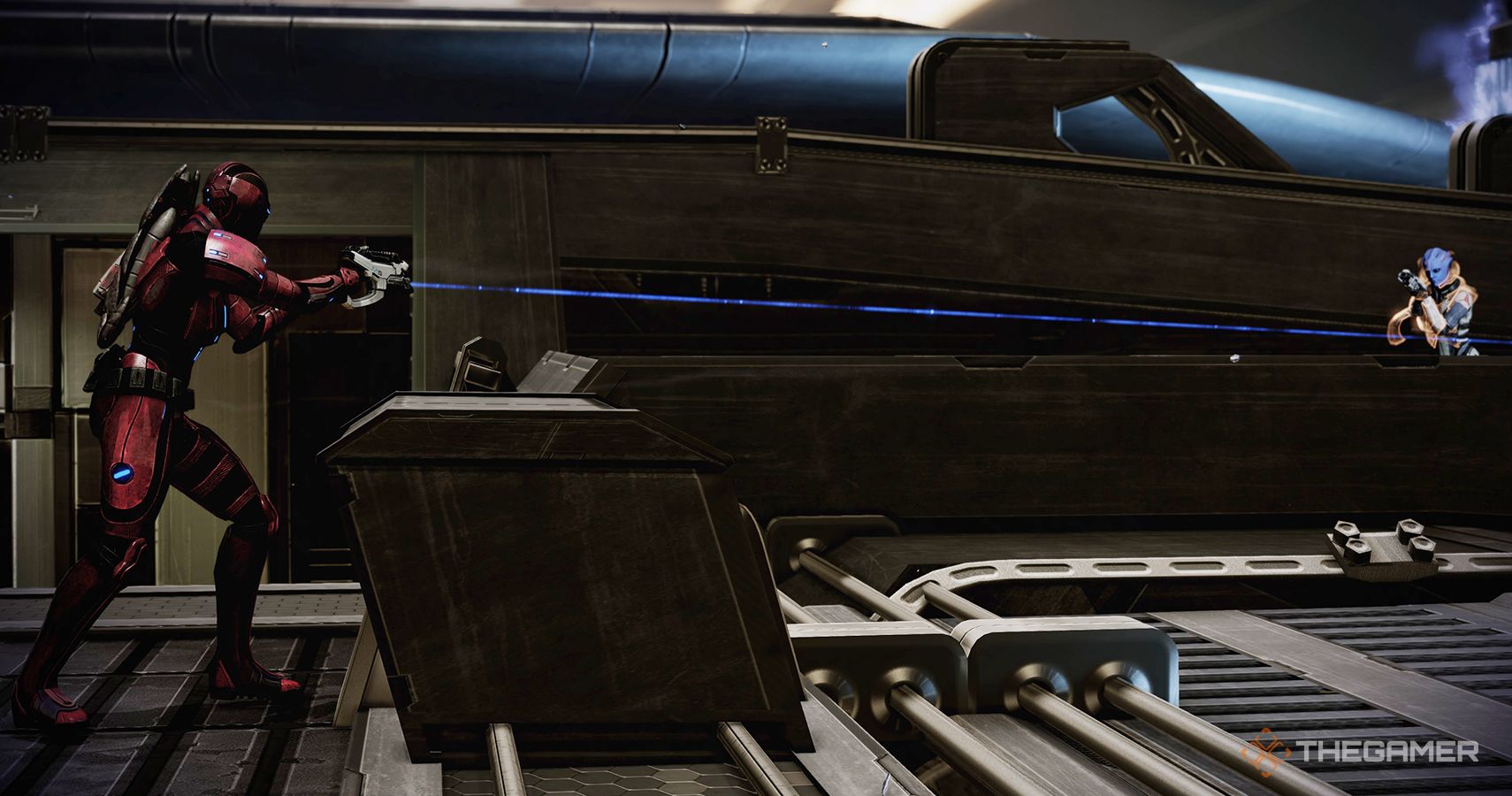 Once inside, your next goal is to reach the prison block to rescue Liara’s friend, and there’s plenty of baddies holding the line between you and him, so be sure to gun them down. Inside, there’s a console with 4,500 credits. Continue to find Feron and a small cutscene ensues. After this, go down the hall to find another 4,500 credits.

Continue forward some more and you’ll reach the linchpin at the center of this whole fiasco, a humanoid arachnid alien pulling the strings of this widespread intergalactic crime network. 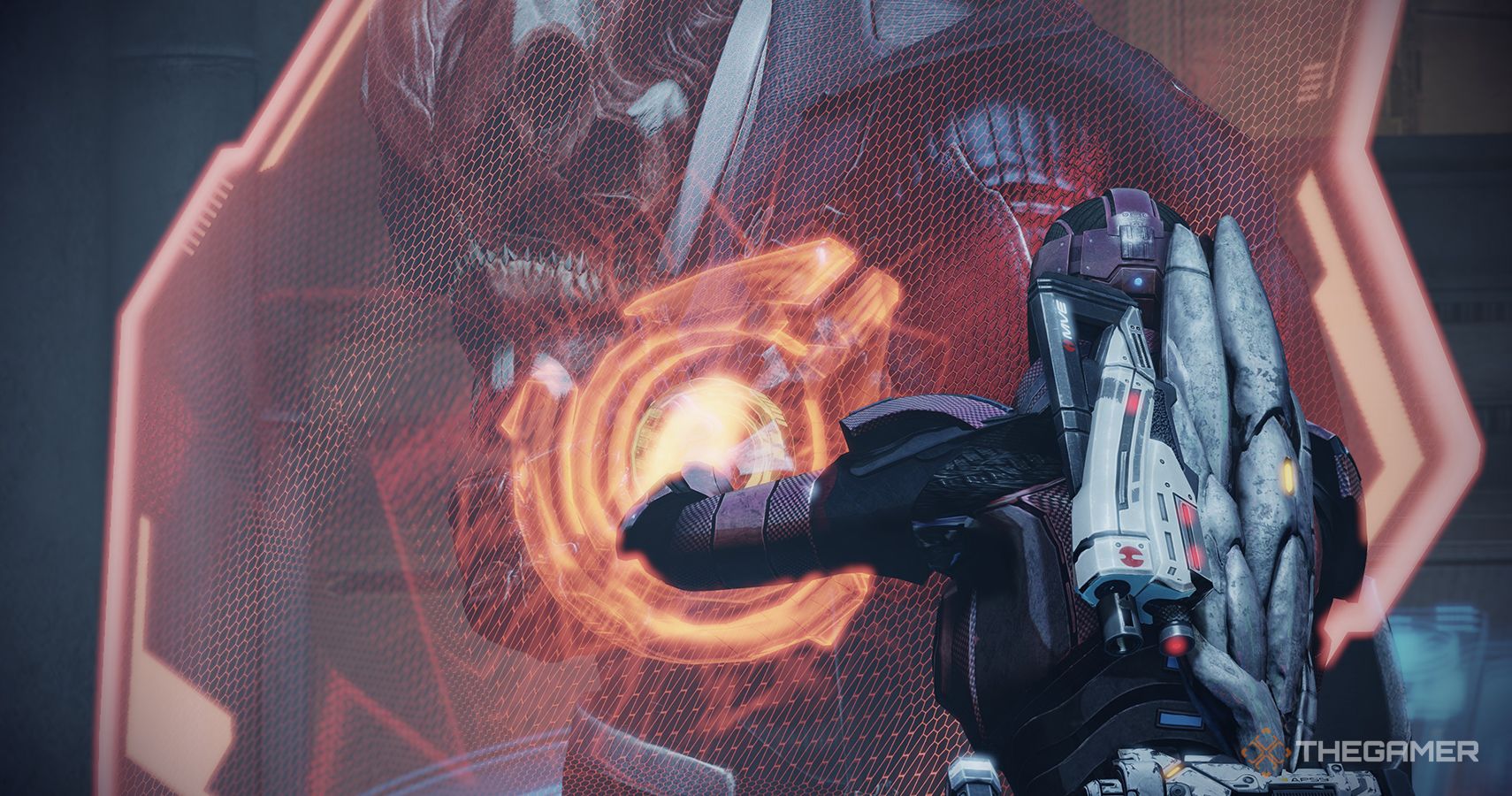 After a long cutscene with Liara, Shephard, and the Shadow Broker, you’ll be thrown into a boss fight. It’s not traditional like with the Spectre we mercilessly cut down prior. Instead, you have to take down his shields and melee him.

They replenish every time and after the first, he’ll whip out an external shield as pictured above. Rinse and repeat and, on the third try, Liara will chime in and kill the Shadow Broker.

You’ll get a big chunk of money in the form of 45,000 credits. Now, Liara takes the mantle of the Shadow Broker, and you have a new place to explore in your leisurely attire. There’s gambling, operations to fund, and dossiers to read. 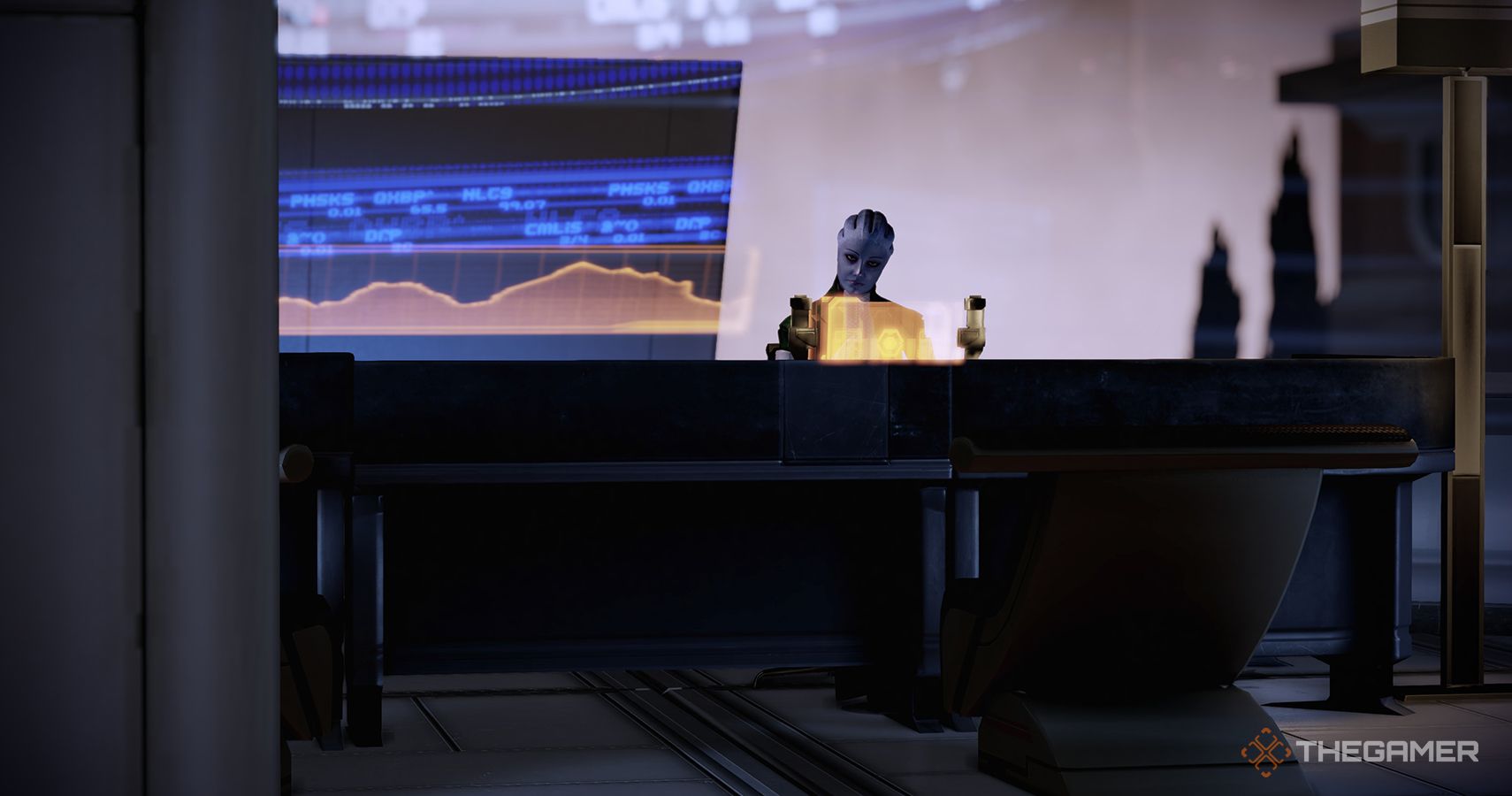 Going forward, if you want to see Liara, you’ll have to visit the Shadow Broker’s lair, but once the mission ends, you’ll be at the beginning of it anyway. Don’t leave. Instead, go forward and talk to her.

Once you end the conversation, she’ll ask if she can ever come up to the Normandy to see you. Offer to let her ‘right now’ and you’ll spend some quality time together in Shephard’s bedroom. If you romanced her in the first game, you’ll get a chance to light the spark once more, otherwise, you’ll just enjoy a nice drink with our blue friend.

As for the achievement hunters out there, doing this quest will net you the Heart of Darkness award.