While Monster Hunter Rise: Sunbreak's endgame involves tackling monsters of ever-increasing difficulty, slaying them to craft new and more powerful gear, looking your best while doing so is equally as important. Through certain event quests, you can earn unique cosmetics to customize your very own monster-slaying look.

In the Master Rank Event Quest 'Fear in the Flooded Forest', you will have to hunt three monsters: Anjanath, Bazelgeuse, and Pukei-Pukei. Let's take a look at each of these monsters' strengths and weaknesses, the best equipment to use to beat them, some tips for clearing this quest, and what you'll get out of it. 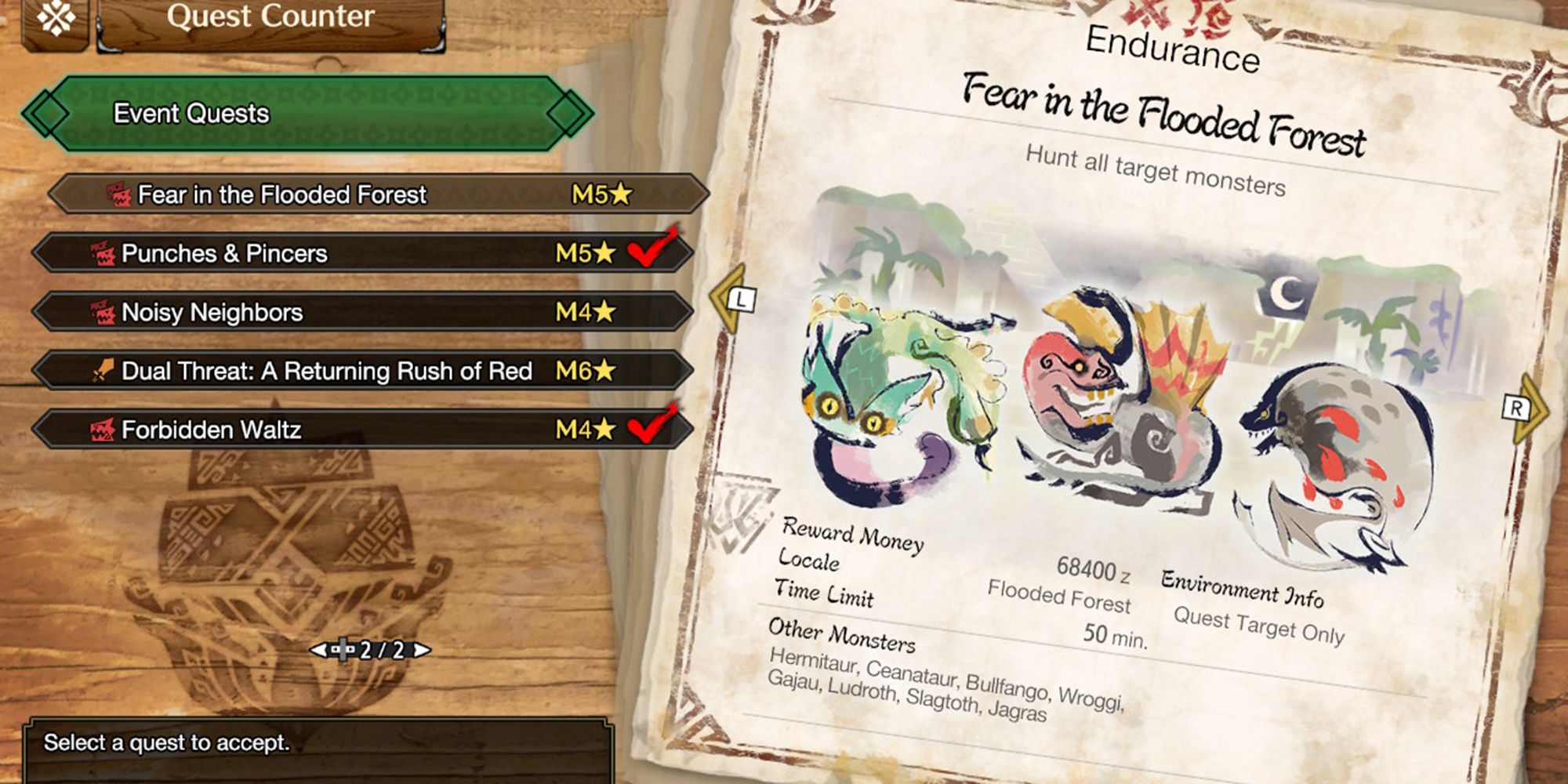 To complete 'Fear in the Flooded Forest', you'll have to hunt an Anjanath, a Bazelgeuse, and a Pukei-Pukei, all within the normal 50-minute quest time limit. As the name of the quest suggests, your battleground is the Flooded Forest. Listed below are each of these monsters' weak points and elemental or status weaknesses.

Best Equipment To Use

Due to the varied types of monsters you will face in this quest, putting together a suitable set of equipment may be difficult, especially if you like to plan around each particular monster's weaknesses. Overall, a physical or Thunder element weapon will give the most coverage.

Bazelgeuse and Pukei-Pukei are weak to Thunder, while Anjanath takes average damage from the element, making a weapon with Thunder the best choice if you want to quickly slay these two. Alternatively, a physical weapon with no elemental attribute will be equally as effective across each monster.

For items, bring Herbal Medicine for Pukei-Pukei to cleanse poison, and some Nulberries for Anjanath and Bazelgeuse's fire and blast attacks. Armor that resists Fire elemental damage will also work best against these two monsters.

Tips For Completing Fear In The Flooded Forest

If fighting three monsters in one quest sounds difficult, don't worry. Luckily, you won't need to face these monsters at the same time, allowing you to fight each monster separately in whichever order you wish.

While fighting Anjanath, stay close to its feet. The closer you are to the monster, the easier it will be to dodge its larger attacks, like its forward bite and charge or its tail sweep. By staying close to the monster, especially when using a melee weapon, you'll be able to get back to attacking while remaining safe from the monster's attacks.

When Anjanath's throat glows red and the fins on its back stand up, it is in its enraged state. While enraged, Anjanath's attacks deal more damage and are much faster. Its fire-breathing abilities are also enhanced. Attack the glowing red areas to knock Anjanath out of its enraged state.

Bazelguese will utilize the scale bombs around its body to create explosives on the ground that blow up after a few seconds. These can be difficult to see in darker areas, so wait for the bombs to start glowing orange and move accordingly to avoid their explosions.

Similarly, Bazelgeuse's throat and tail will glow bright orange when it is enraged. During this state, Bazelgeus's scale bombs will explode more quickly and deal more damage. Additionally, it will use new attacks that launch more scale bombs around, making large areas unsafe. Attack the glowing spots to knock Bazelgeuse out of its enraged state.

When Pukei-Pukei is enraged, it will move erratically, lobbing poison bombs randomly around the area. Using the same advice for fighting Anjanath, remain close to Pukei-Pukei and dodge out of the way when it charges. Using this attack, it doesn't often hit the same area twice, meaning avoiding an attack near the start of its poison-lobbing run will keep you safe for the remainder of the attack. 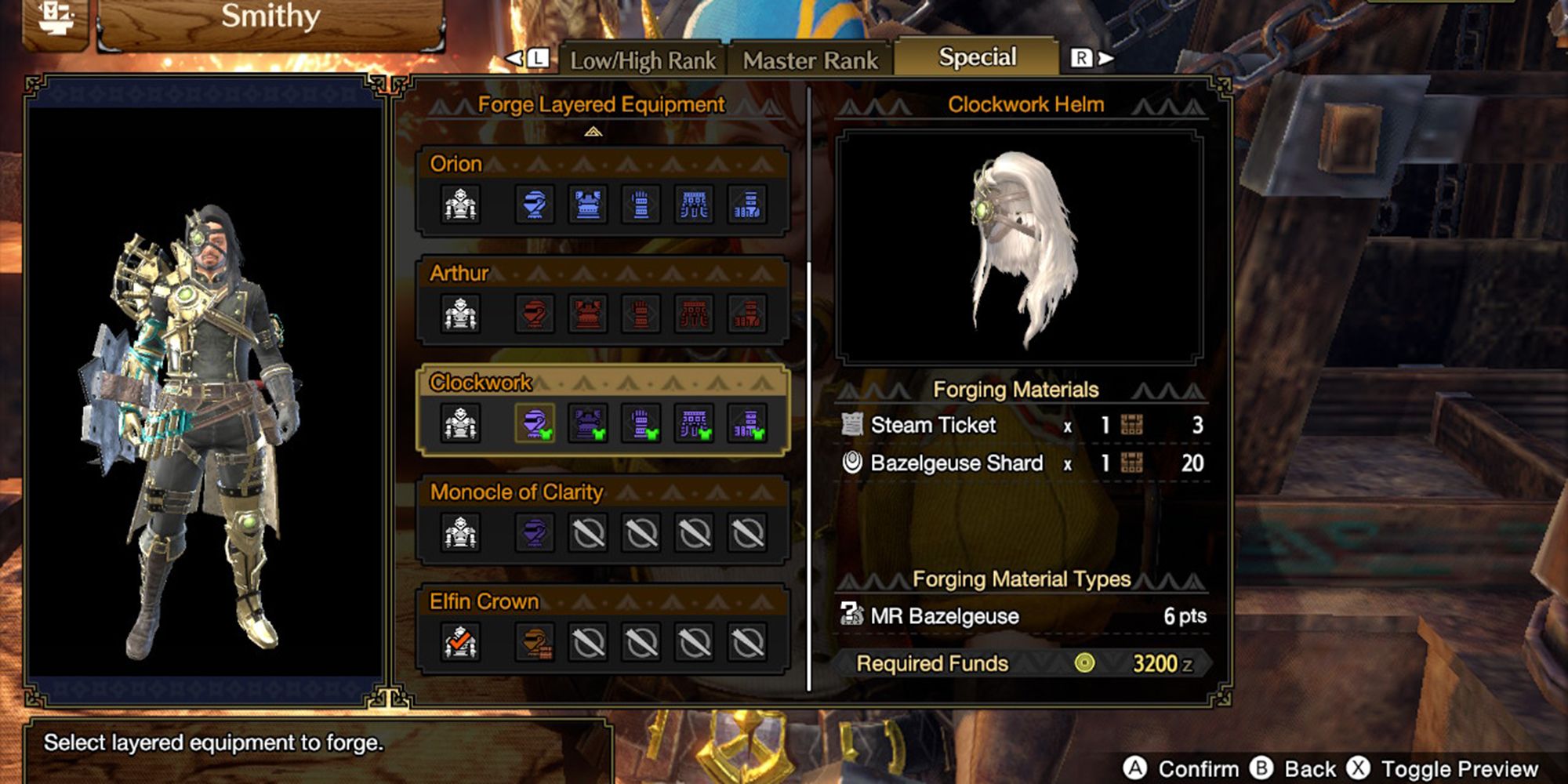 In addition to this armor set and Steam Tickets, you will obtain normal quest rewards for hunting an Anjanath, Bazelgeuse, and Pukei-Pukei.