The stream of event quest releases in Monster Hunter Rise: Sunbreak continues with the Master Rank quest, Purr-ivate Eye. In this quest, you'll have to defeat three ice-wielding foes in the Frost Islands to score some detective-themed outfits for your Palico and Palamute.

This quest can be difficult if you aren't prepared, but that's where we come in. Let's take a look at each of the monsters you'll face in this quest, their strengths and weaknesses, the best armor and weapons to use, some tips for beating them, and finally the exclusive rewards you can obtain. 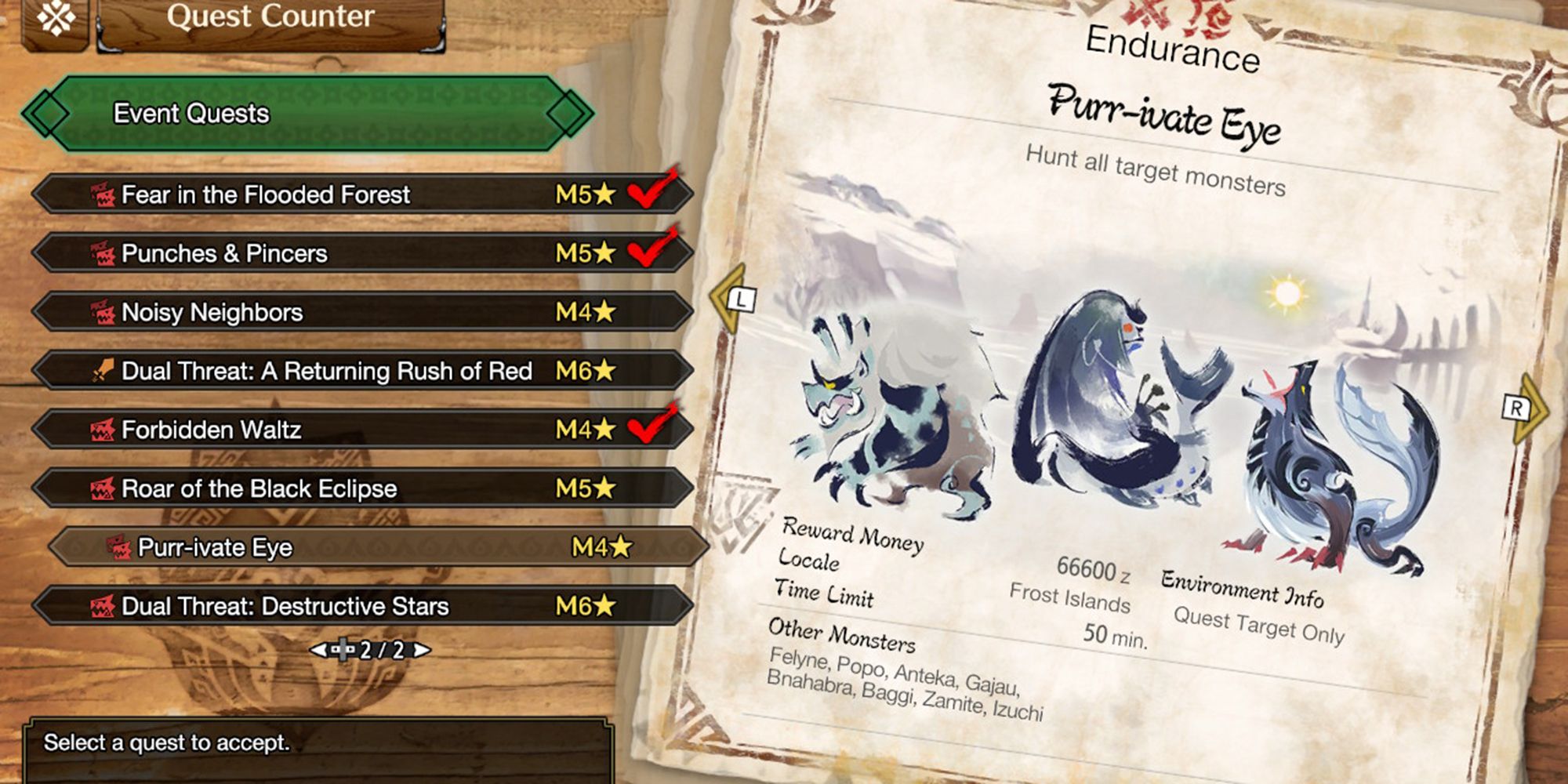 Your mission, should you choose to accept it, is to hunt an Aurora Somnacanth, a Goss Harag, and a Lunagaron in the Frost Islands. These monsters all have similar strengths and weaknesses, which will make planning your equipment for this quest a bit more straightforward.

Best Equipment To Use

Luckily, all three of these monsters are weak to Fire and Thunder damage, making these two elements obvious choices for your weapon. Conversely, avoid bringing a Water or Ice element weapon, as all three of these monsters completely resist damage from this element. If you don't have a suitable Fire or Thunder weapon, a raw damage weapon with no elemental attribute works, too.

Similarly, all three of these monsters will use Ice element attacks, making armor that resists Ice damage very valuable. This isn't a necessity by any means, but can provide a nice boost to defenses against the monsters present in this quest. Overall, use the equipment you are comfortable using, as this will lead to the highest chance of success.

Be sure to bring along some Nulberries to cleanse the Iceblight status effect. Aurora Somnacanth in particular can repeatedly inflict this ailment, which you can easily clear with Nulberries. 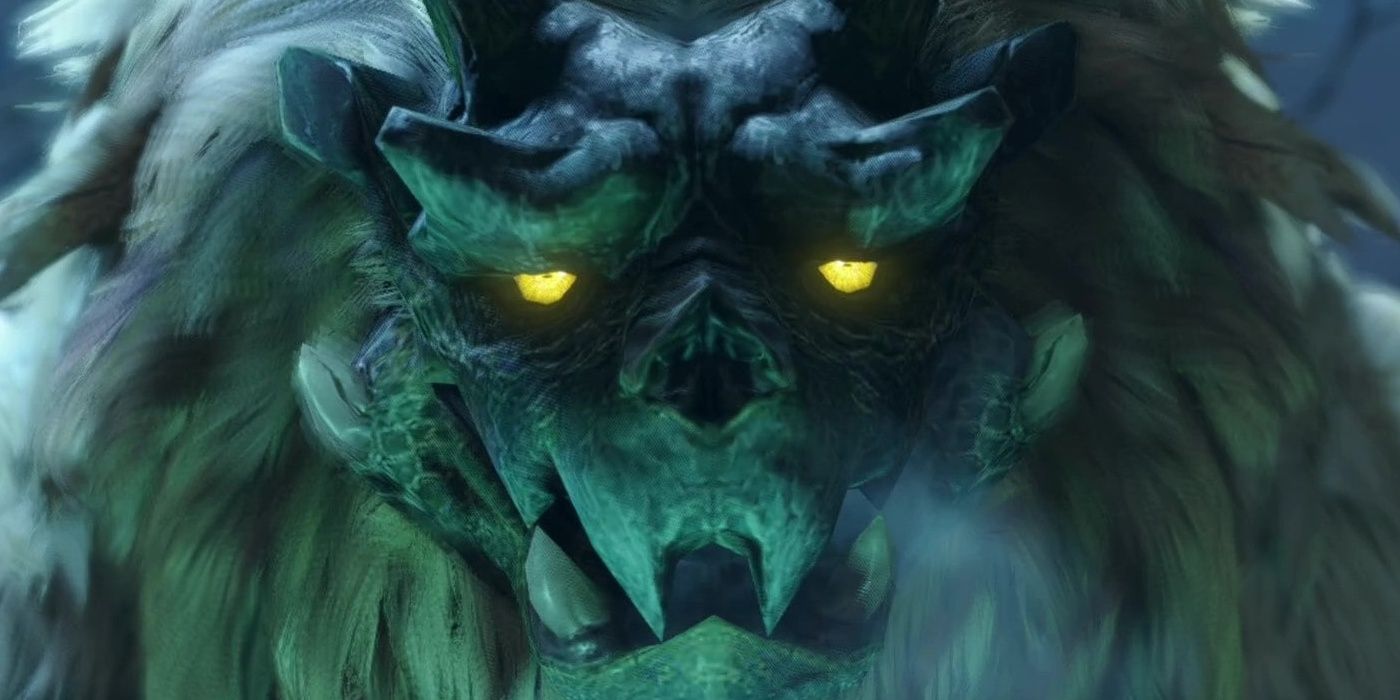 Overall, this quest shouldn't be too difficult to complete, especially if you have endgame armor and weapons. However, if you're still early in the Sunbreak expansion, some of these monsters may give you some trouble.

When Aurora Somnacanth is enraged, it will unleash its ice breath and cloud attacks more frequently, which is where the Nulberries you brought will come in handy. Attacking the monster's head will bring it out of its enraged state and quell its fierce attacks. A well-timed Flashbomb can also interrupt its large ice explosion attack, making the monster vulnerable.

Goss Harag will encase its arms in ice when it is enraged. These will take more damage than normal, but will enable the monster to use high-damage attacks. Attack these ice weapons to break them and inflict big damage, while knocking Goss Harag out of its enraged state.

Watch out for Goss Harag and Lunagaron's shockwave attacks, as these can be difficult to notice from afar and can deal very high damage.

Similarly, Lunagaron will coat its arms and legs in ice armor when it has entered its enraged state. During this time, the monster will attack faster and more frequently, slashing with its claws as it moves around. Try to aim for its ice armor to break it and knock it out of its enraged state.

Spend some time gathering Spiribugs around the map to boost your health and defense if you're taking a lot of damage.

Each of these monsters has a distinctly different fighting style, which can make using the same weapon to fight all three challenging. If you want, you can swap your weapon mid-quest to give yourself an advantage over the monster you are currently fighting. Unless you Wyvern Ride one of these monsters to an area where another already is, you won't have to fight any of them at the same time. 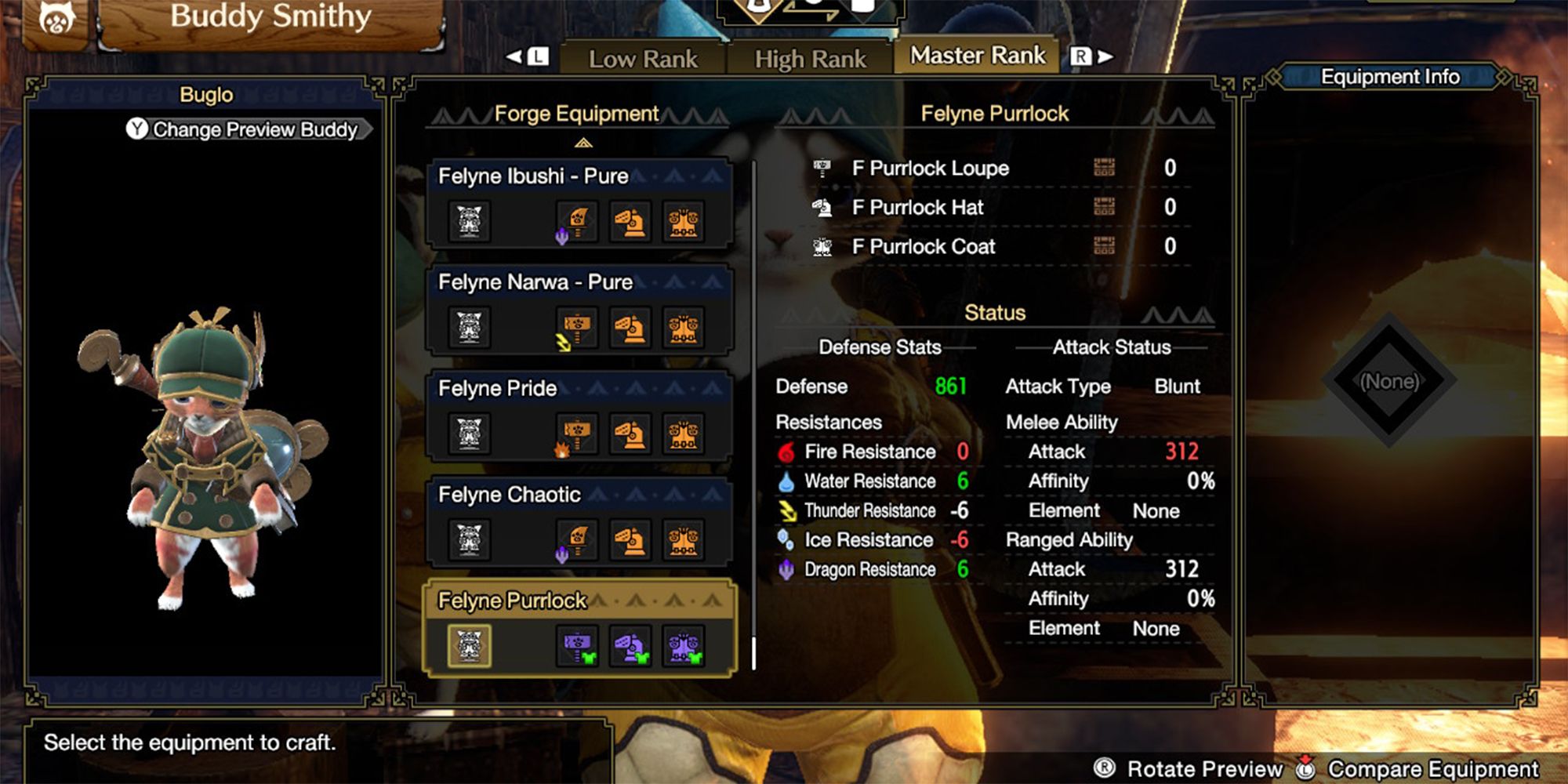 Upon completing this quest, you will obtain normal drops for defeating Aurora Somnacanth, Goss Harag, and Lunagaron, as well as the exclusive item Thief's Calling Card. This item, along with Heavy Scraps from each of these monsters, can be used to craft the Felyne Purrlock and C Arfsene equipment and Layered Armor.