In Moonscars, a new 2D Soulslike from indie studio Black Mermaid, protagonist Grey Irma can carry just a few weapons simultaneously. There’s her trusty broadsword and one other rotating slot for a special weapon. You’ll have the option to keep that same special weapon or swap it out for one of two other random choices.

You’ll want to try all five weapons to explore their various strengths and weaknesses. These weapons are not created equal, however, and while all can be helpful in certain situations, some have more utility than others. We rank them by speed, range, and the unique effects they have on enemies to determine the best, so you always have the right tool for the job. 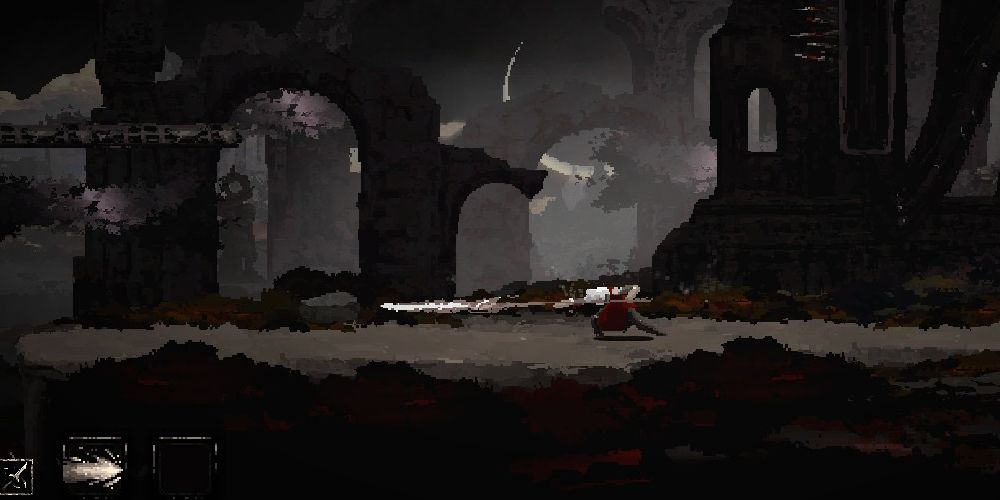 The spear is Moonscars’ most underwhelming special weapon. It gives Irma a longer attack than her sword, but she can only stab it forward, making it a very linear weapon that only works on enemies right in front of her. It’s also slower than Irma’s sword, as all the other weapons are, but not powerful enough to justify the moment of vulnerability she has while using it. Further working against it is the ho-hum status effect it inflicts on enemies—a debuff that causes them to move slower. Moonscars is a hard game, and you’ll want all the help you can get, so unless the spear particularly suits your playstyle, you’re probably better off using something else. 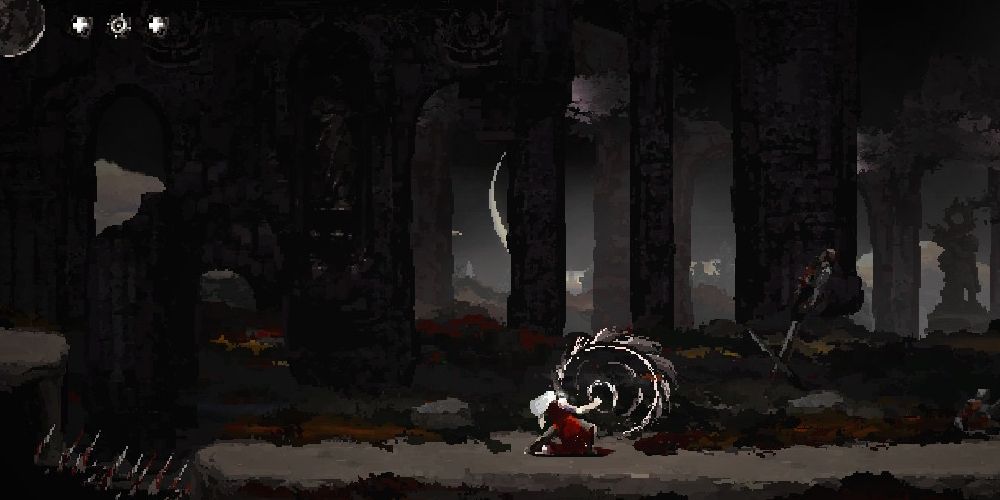 The Painwheel (no, not that Painwheel) is a spinning saw blade Irma holds in front of her for a moment before slamming it on the ground. There’s a considerable windup before the blade comes out, but it does have a large hitbox and can hit enemies repeatedly while it spins. The status effect is good, too, causing enemies to hurt themselves while attacking.

Despite its merits, the Painwheel has limited range, and Irma has to be right next to and in front of her opponent for it to hit. Try to pull this slow, close-up attack out when surrounded by enemies—a constant occurrence—and you’re likely to feel the pain as much as they are. 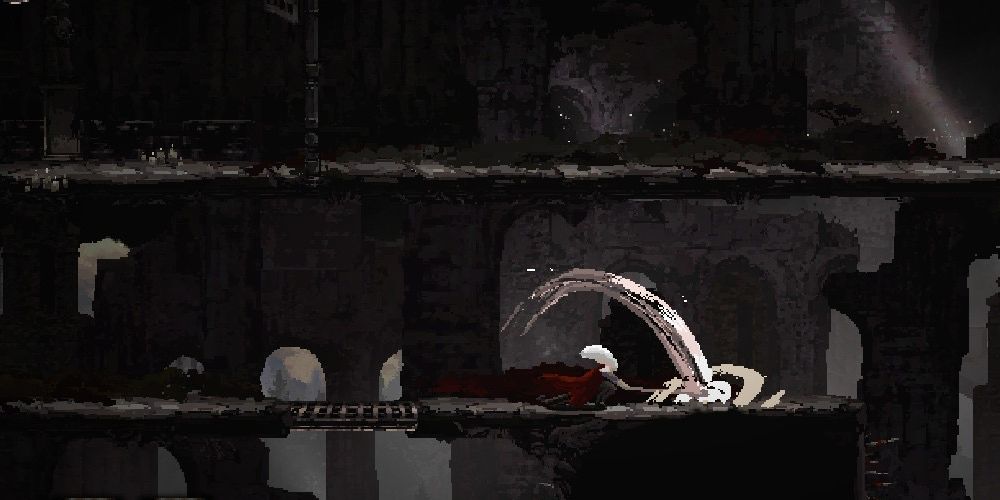 The hammer is a decent weapon if you prefer a risky, heavy-hitting playstyle and aren’t afraid to leave yourself vulnerable while landing big damage on anyone unfortunate enough to be in your path. It is, not surprisingly, also very slow, doesn’t have the greatest range, and can be dangerous to throw out in a crowd of enemies. With its long recovery frames, anyone you don’t hit gets a generous window to attack you.

At least its status effect, which leaves enemies stunned, can also give you time to follow up with some extra sword strikes before your victim has a chance to retaliate. If you’re going one-on-one with someone, or have a cluster of weaker enemies, those can be good opportunities for the hammer. It’s not a bad weapon—it just lacks the safety and versatility of the game’s better options. 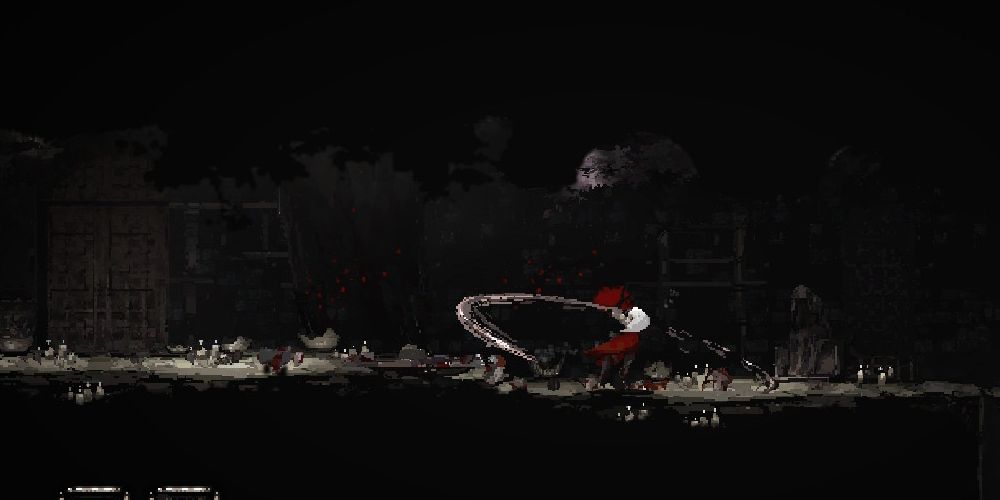 Irma swings the whirlwind twice around her in a wide, sweeping assault—a bit like Link’s spin attack from the Legend of Zelda games. With its large hitbox and ability to hit enemies twice, it’s one of Irma’s best weapons. It’s also the only one you can reliably use in a crowd, as it hits enemies in all directions, both in front of and behind her.

Additionally, the whirlwind offers the best of all the status effects—a hex that continues to hurt enemies over time. It doesn’t leave you particularly vulnerable, either, so you can use it frequently in conjunction with your sword, rather than having to wait for select opportunities. With so much going for it, give the whirlwind a whirl if the first weapon on this list isn’t available. 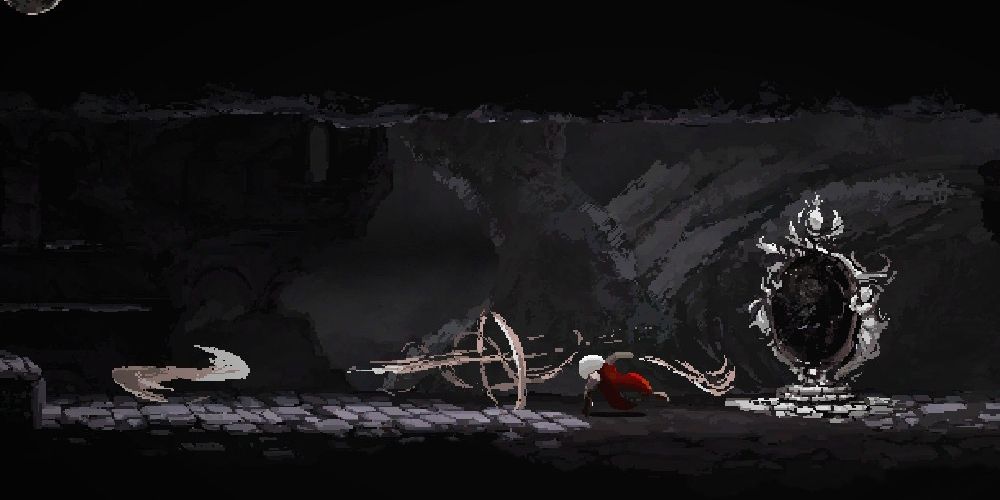 The harpoon is a long-range, spinning, boomerang-like weapon, filling a very specific gap in Irma’s arsenal. The only projectile Irma can get that doesn’t require any ichor—a magic meter that powers your spells and healing ability—it’s her only way to reliably attack enemies without getting next to them.

Given that most enemies can only hurt you up close, this gives her a huge advantage she wouldn’t normally have, and while it may not be the strongest weapon, it does hit twice on the way forward and back. Its status effect, which makes your witcheries (spells) do more damage, is a nice bonus, but having such a great free projectile might mean you won’t even need your spells as often.

Another thing to consider about your weapon choices is that the game will entice you to switch weapons at every new Mirror, by extending your health or ichor meter if you choose a weapon you weren’t using before. In the early phases of the game, having that extra health can be a godsend, so you may want to favor that bonus regardless of which weapon provides it.

Again, depending on your playstyle, any of these weapons could come in handy at the right time and place. But when in doubt, zone your foes out with the harpoon, or get some added crowd-control with the whirlwind.