Bedecked Brokers is a new preconstructed Commander deck from Streets of New Capenna. Its commander is Perrie, the Pulverizer, one of the strongest Bant commanders. The deck focuses on counters. So, when upgrading this preconstructed deck to a higher power level, that’s something you want to keep in mind. Creating different types of counters like shield counters, +1/+1 counters, poison counters, and one of the many more types that Magic: The Gathering offers.

While there are plenty of optimum cards that come in blue, green, and white that can be added to the deck, the goal isn’t to break the bank. Looking at cards that run for five dollars or less should allow you a strong enough deck to hold your own at your next Friday Night Magic. 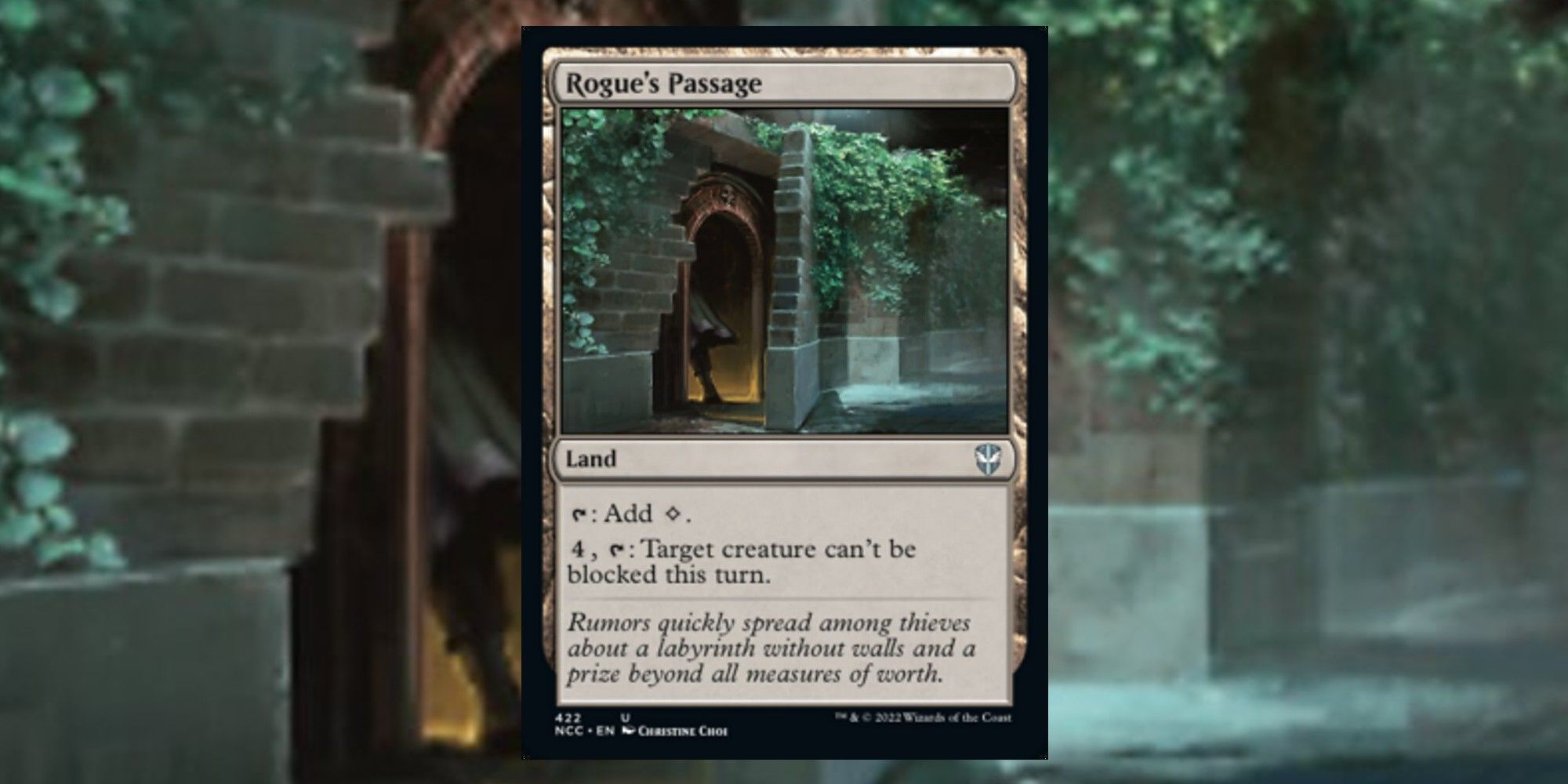 Every Commander deck should play Rogue's Passage, plain and simple. It's an easy way to slip by your opponent's defenses and can serve up that final bit of damage you were struggling to get through. If your strategy relies on dealing commander damage, you should especially play this card.

It’s an inexpensive land that doesn’t hurt your wallet. It can hurt your opponent, though. Give your creature the most counters or the largest buffs unblockable and short of a removal spell, and it will be sneaking by to take a chunk of your opponent’s health. 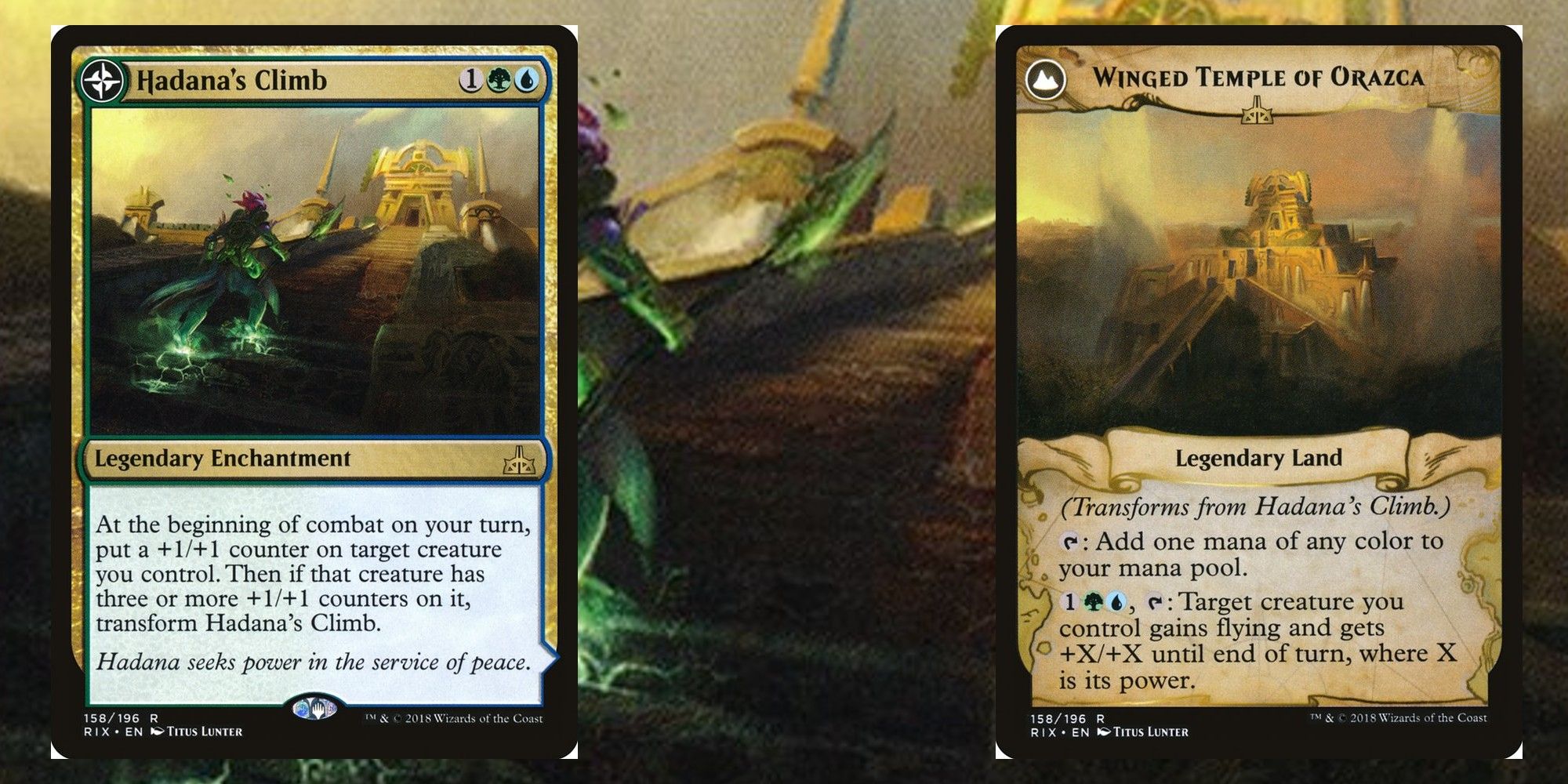 When you can’t be unblockable, fly. For only three bucks, you can have this legendary enchantment that adds a few counters to your creatures at the beginning of combat. Once that creature has three or more +1/+1 counters on it, it transforms into the legendary land Winged Temple of Orazca. Getting +1/+1 counters onto your creatures won’t be difficult. In all likelihood, Hadana’s Climb will flip the turn it comes onto play.

Winged Temple of Orazca will be a looming threat for your opponents because not only does it give the target creature flying, it doubles their attack. So, if you attack with a creature that has five power, you'll be attacking with ten power. Opponents will be scrambling to deal with this land or will have to have an answer for the creature you target with it. 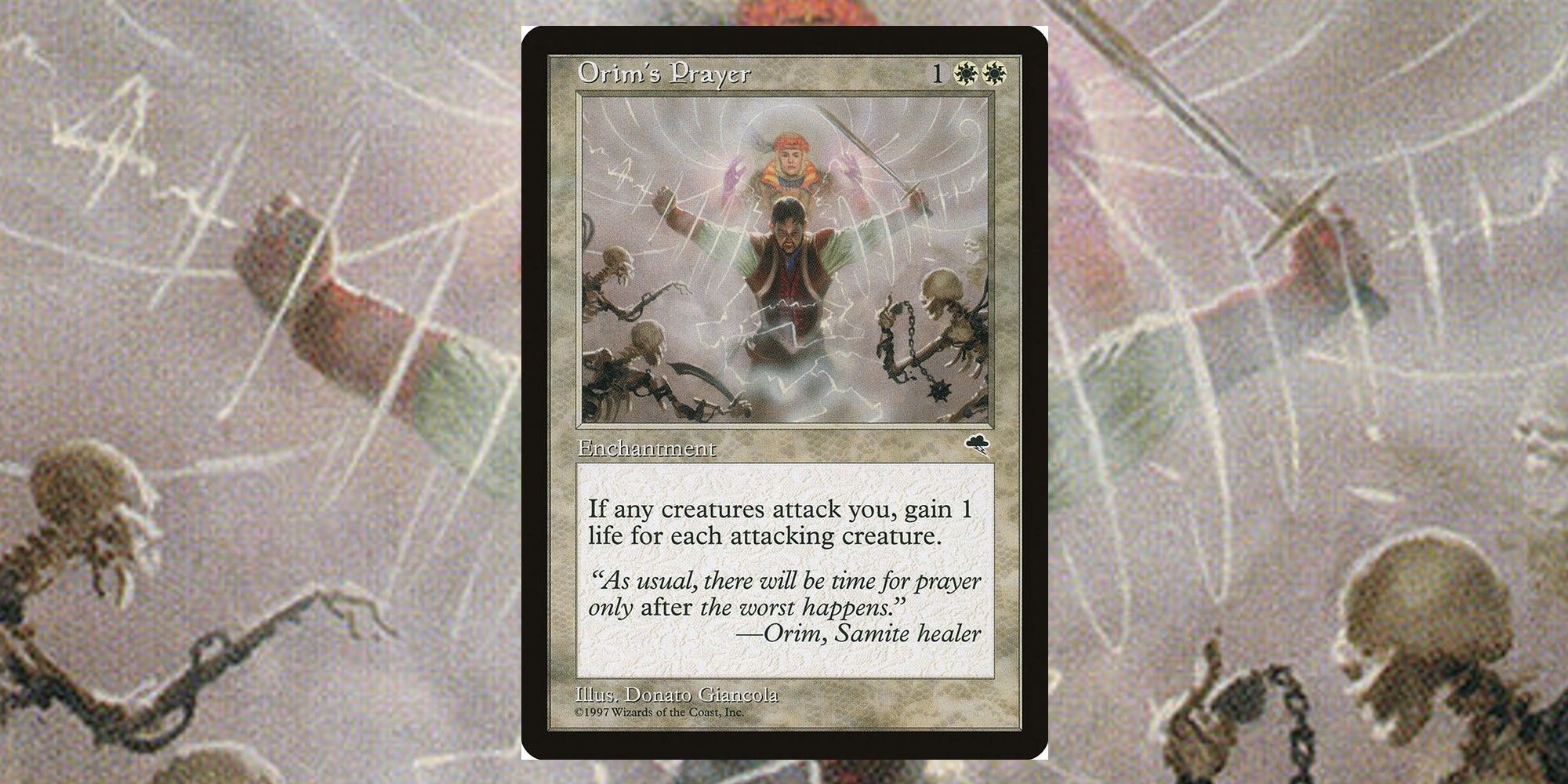 A little bit of health is always helpful in a game of Commander. So, having an enchantment that gives you one health point for each creature attacking you can be beneficial. It’s especially useful against aggressive decks that build up armies for devastating attacks.

If you opt for a strategy with Heliod, Sun-Crowned, this card is even better. Orim’s Prayer will keep you in the game longer unless your opponent has an infinite combo or relies strictly upon burn to win. 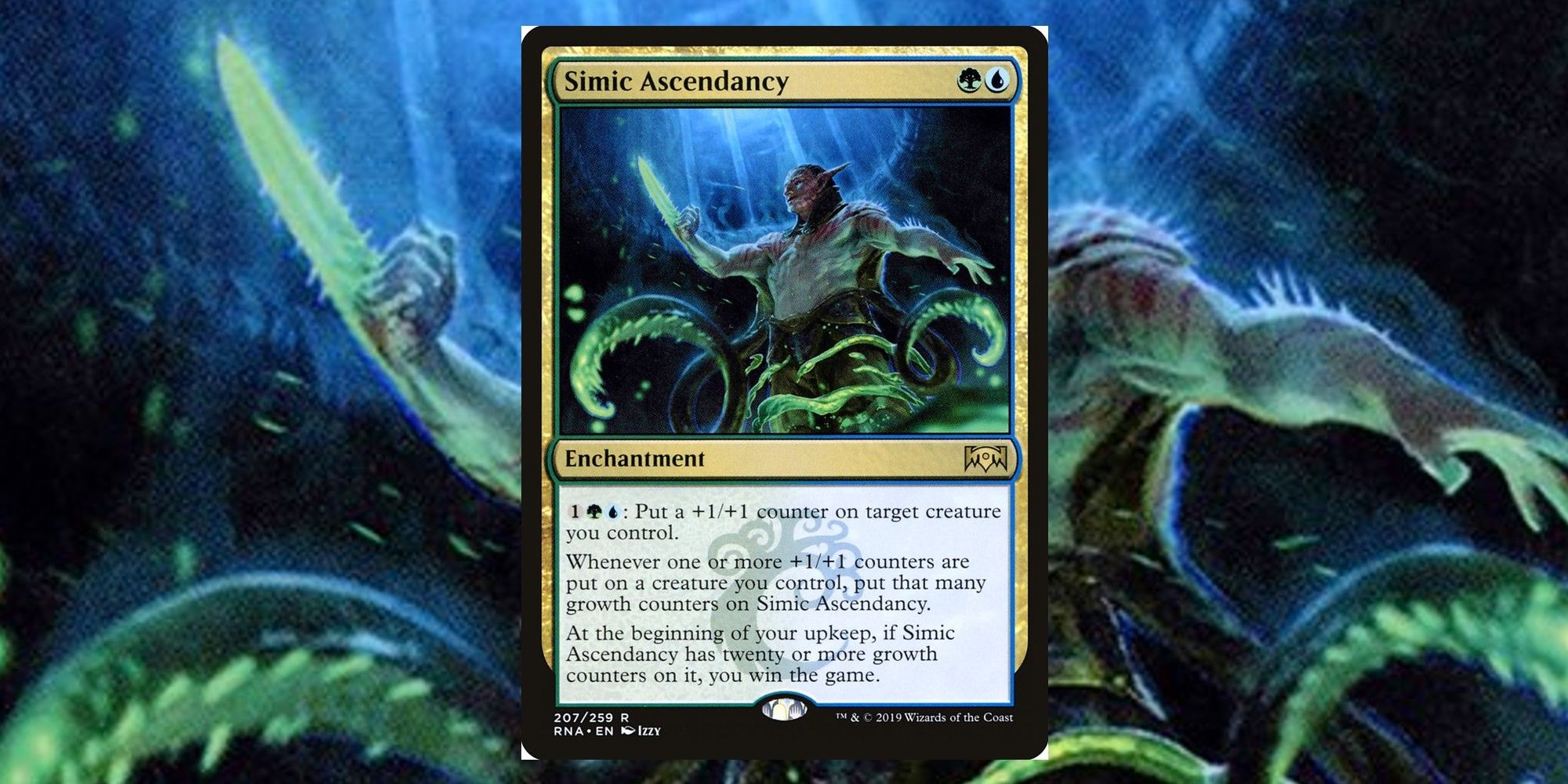 In a deck that accumulates so many counters and proliferates efficiently, Simic Ascendancy is one of the best alternate win conditions in this deck. Cards like Luminarch Aspirant and Scavenging Ooze make it easy to add +1/+1 counters to creatures. This is what Simic Ascendancy is looking for to win the game.

If Simic Ascendancy has 20 or more growth counters on it at your upkeep, you win the game. This might be significantly easier to accomplish than dealing damage. When you take Karn’s Bastion and other spells that allow you to proliferate into account, getting 20 growth counters on this enchantment won’t be difficult. Even if your opponent has some enchantment removal, you’re playing blue. Throw in a counterspell or two and you're golden. 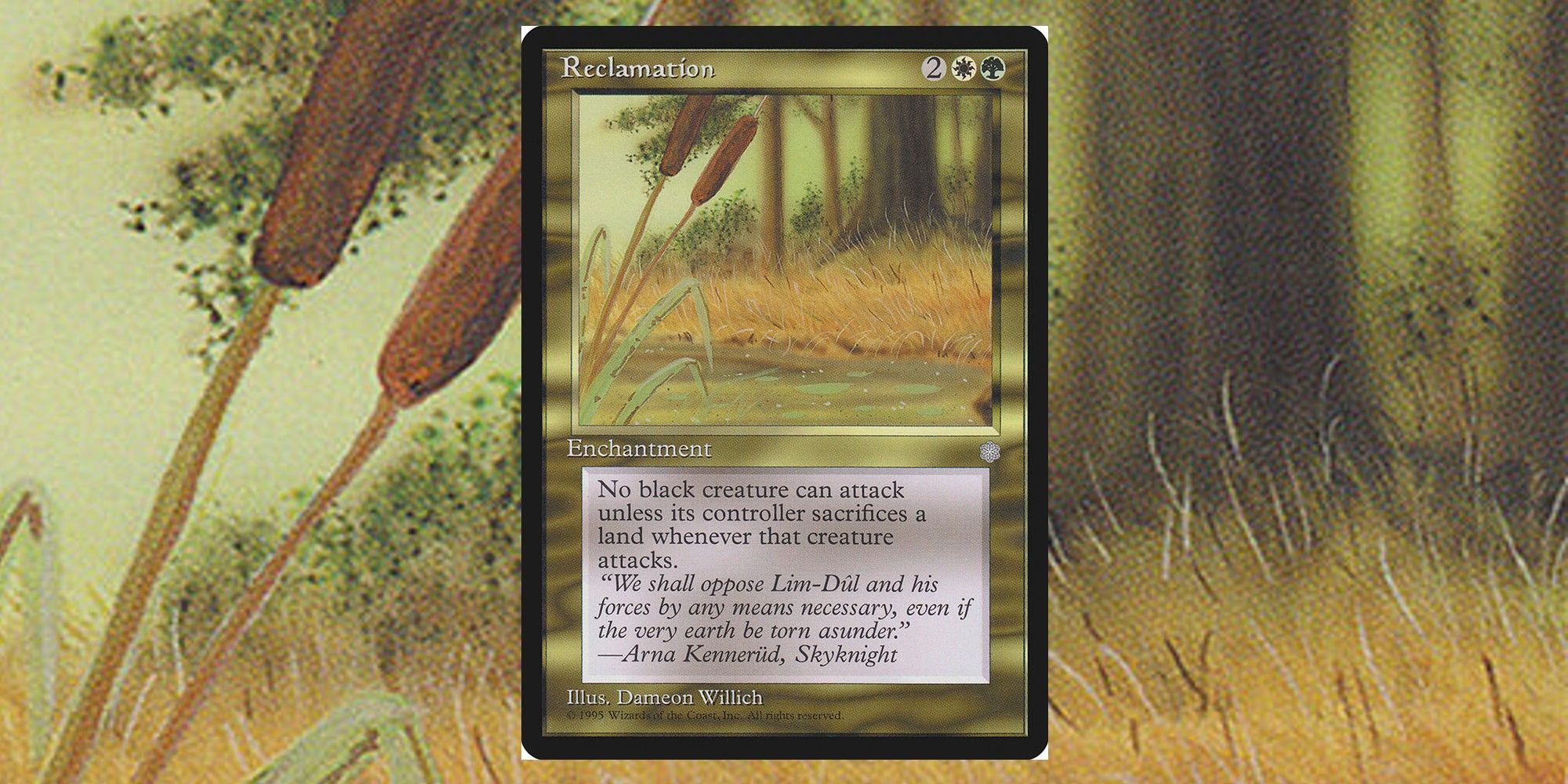 A spell that targets a specific type of card is usually best suited for a sideboard in most formats, but anything is possible in Commander. It pays to be prepared. Reclamation protects you against those commanders that like to play swamp-based spells. If they want to attack with a black creature, they’re going to have to lose some land to do so.

With mana being so crucial in Commander because Commander players like to cast big spells, losing land isn’t an easy choice. This forces your opponent to have an answer for this little enchantment. Goes great in a pillow fort strategy.

5 Crescendo Of War Helps With Attacks And Blocks 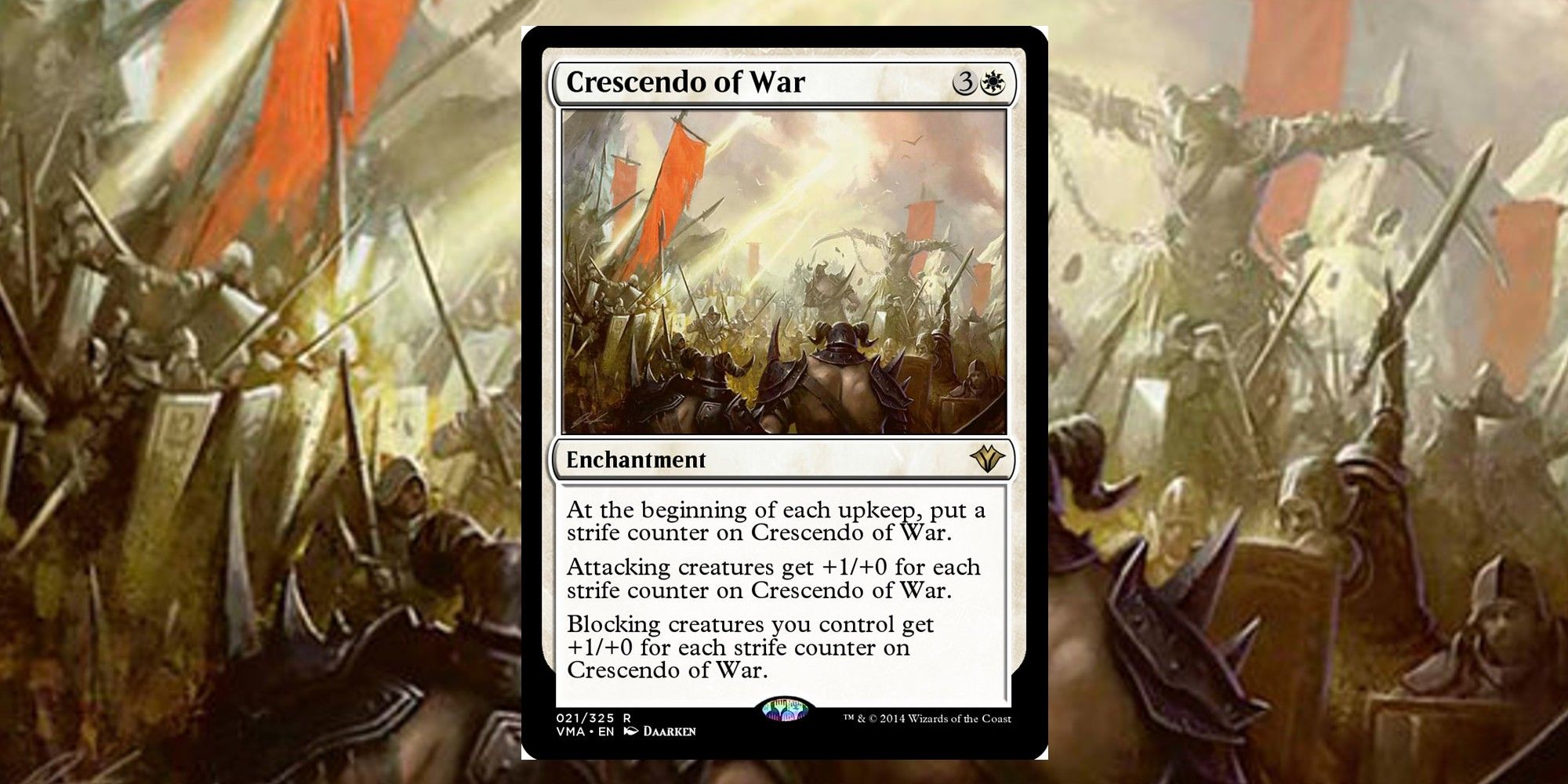 If you have two strife counters on this enchantment, your attacking creatures get +2/+0. If it has three counters, they receive +3/+0 and the opposite if you decide to keep your creatures back on defense. So, if you find yourself on your back foot, you’re prepared and able to hang onto your life total for a little longer until you manage to stabilize.

4 Spike Weaver, The Fog Spell With A Body 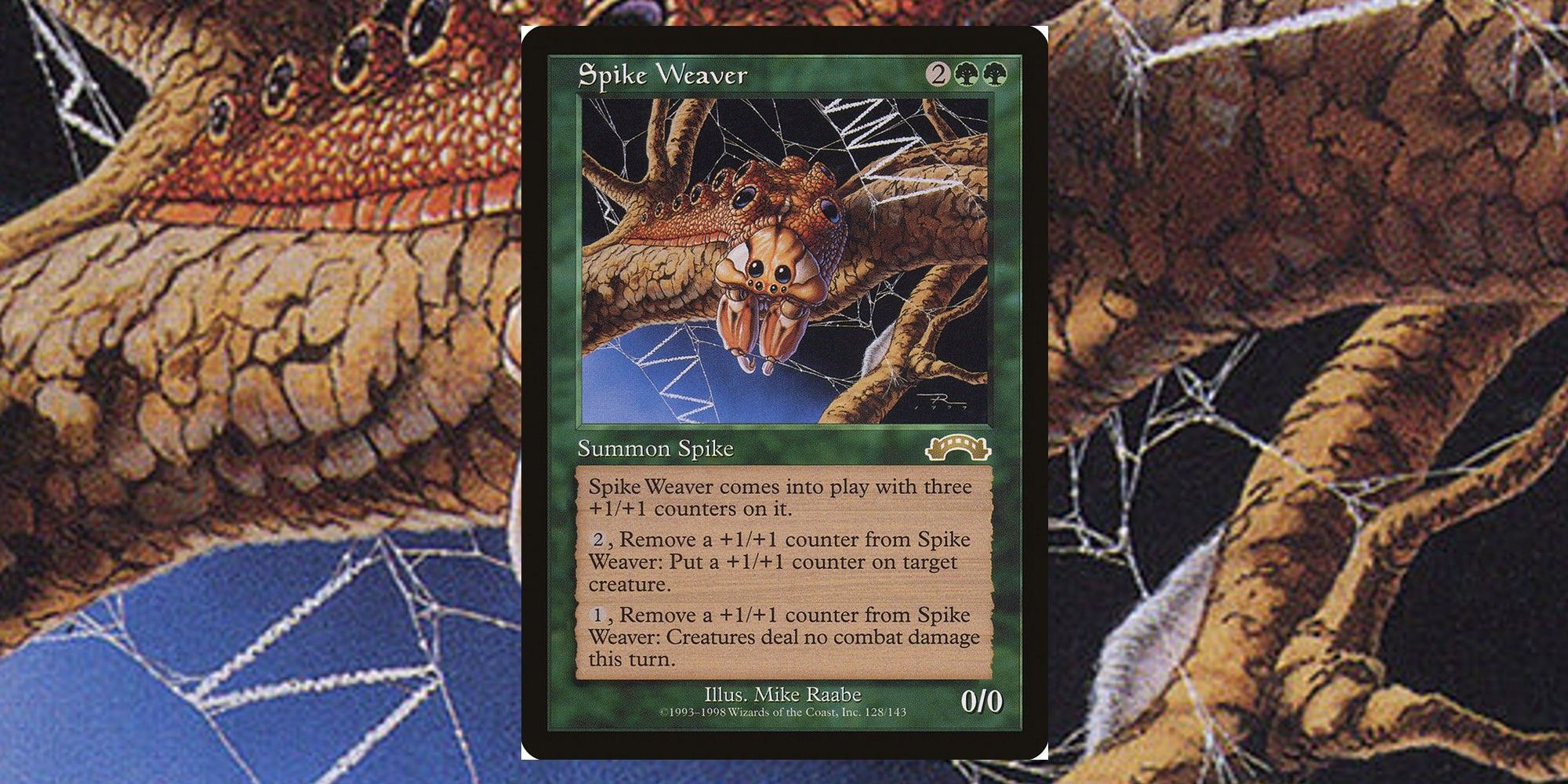 Spike Weaver might not seem like much of an addition to the deck, but it does a couple of things very well. This spider comes into play with three +1/+1 counters on it and lets you move those counters to other creatures you control. It might not seem like much since Spike Weaver only has three counters to distribute. However, when you have cards like Karn’s Bastion and Evolution Sage to proliferate all of your counters, three counters can easily increase to ten.

The second ability on Spike Weaver is a nice touch because it can frustrate your opponents. By spending a single generic mana, you can fog the board. This means that no combat damage goes through. You might think that it’s susceptible to a removal spell and you would be correct. However, in a deck with shield counters, removal won’t be as easy as anticipated. 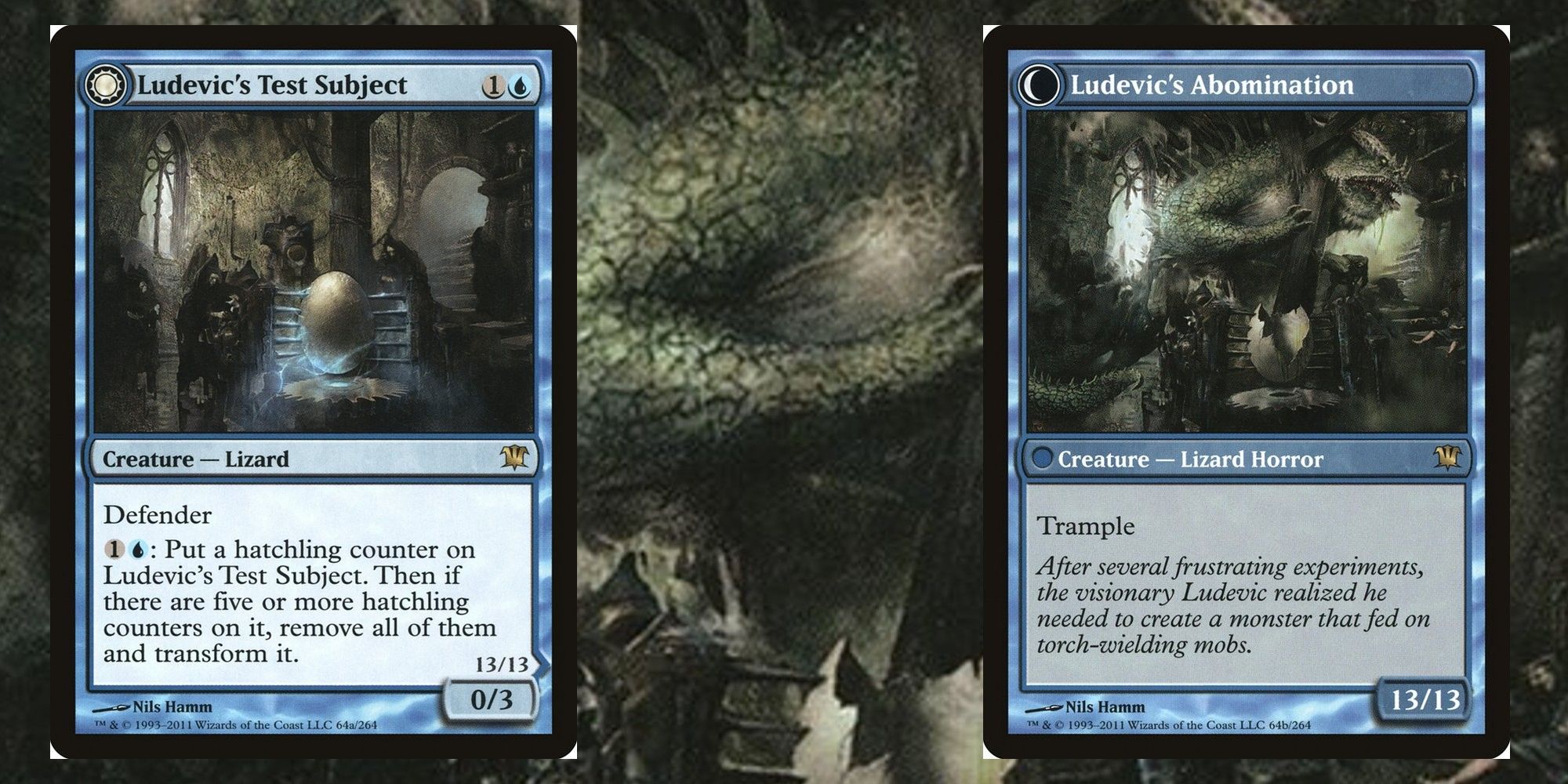 There’s not much to say about this blue monstrosity. It begins its life as a 0/3 lizard and you can put counters on it by paying one blue and one generic. Other than that, it just sits there. That is until it has five hatchling counters. Then it transforms into a slithering behemoth.

Blue isn’t known for seeing giant creatures like this unless it’s a Kraken. Having trample is a nice little touch, too, which kind of breaks the color wheel. Get Ludevic’s Test Subject out early enough and it will be difficult for your opponents to deal with. 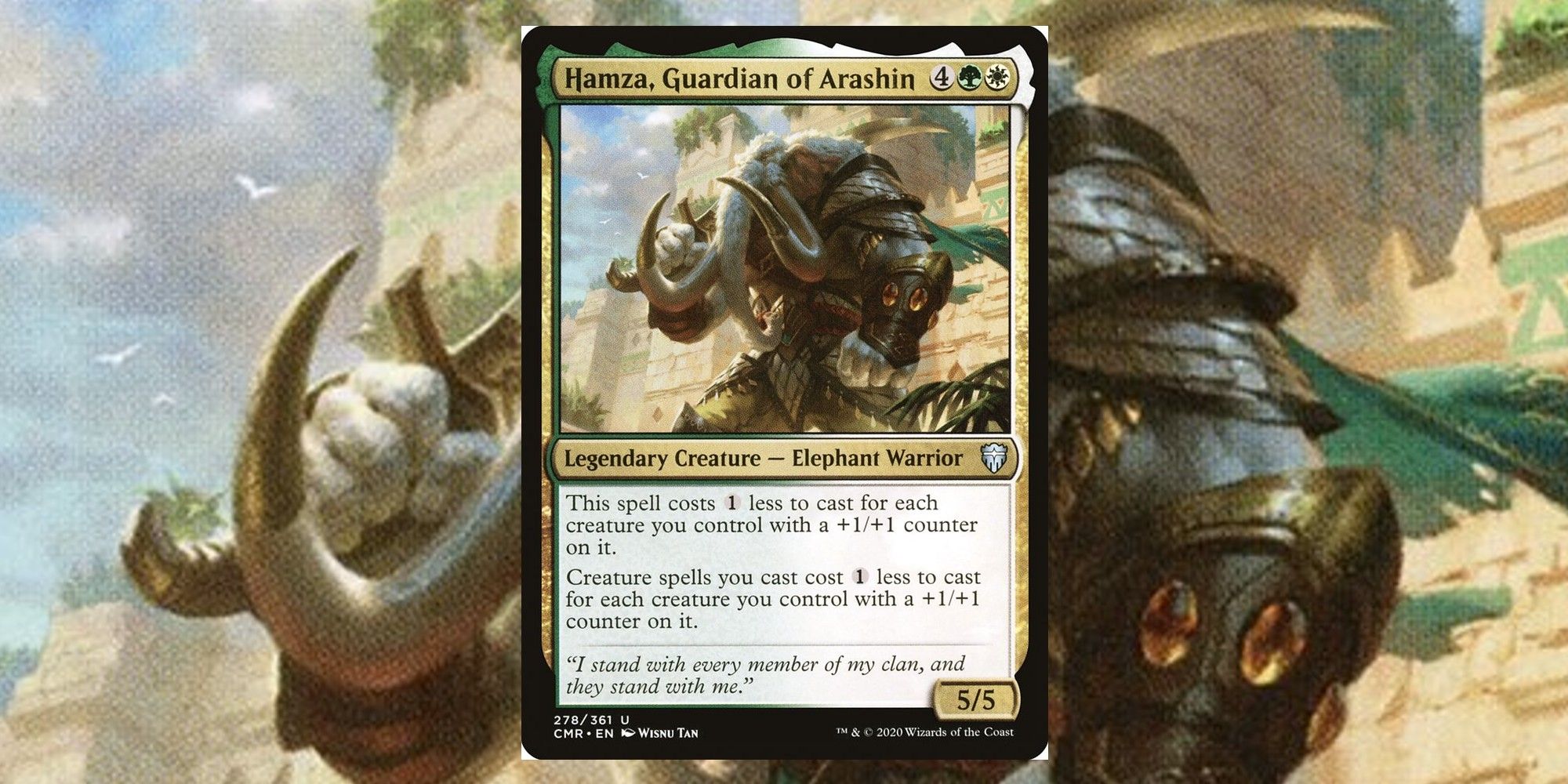 In a deck where counters matter, Hamza, Guardian of Arashin may very well consistently cost a total of two mana. Going from a mana value of six to two is a major difference that shouldn’t be passed up. Then once he’s on the field, he decreases the cost of your other creatures. For each creature you control with a +1/+1 counter, creatures you cast cost one less generic mana. Hamza is also a 5/5, which isn’t anything to dismiss. Even in a game of Commander.

1 Faithbound Judge Is Another Path To Victory 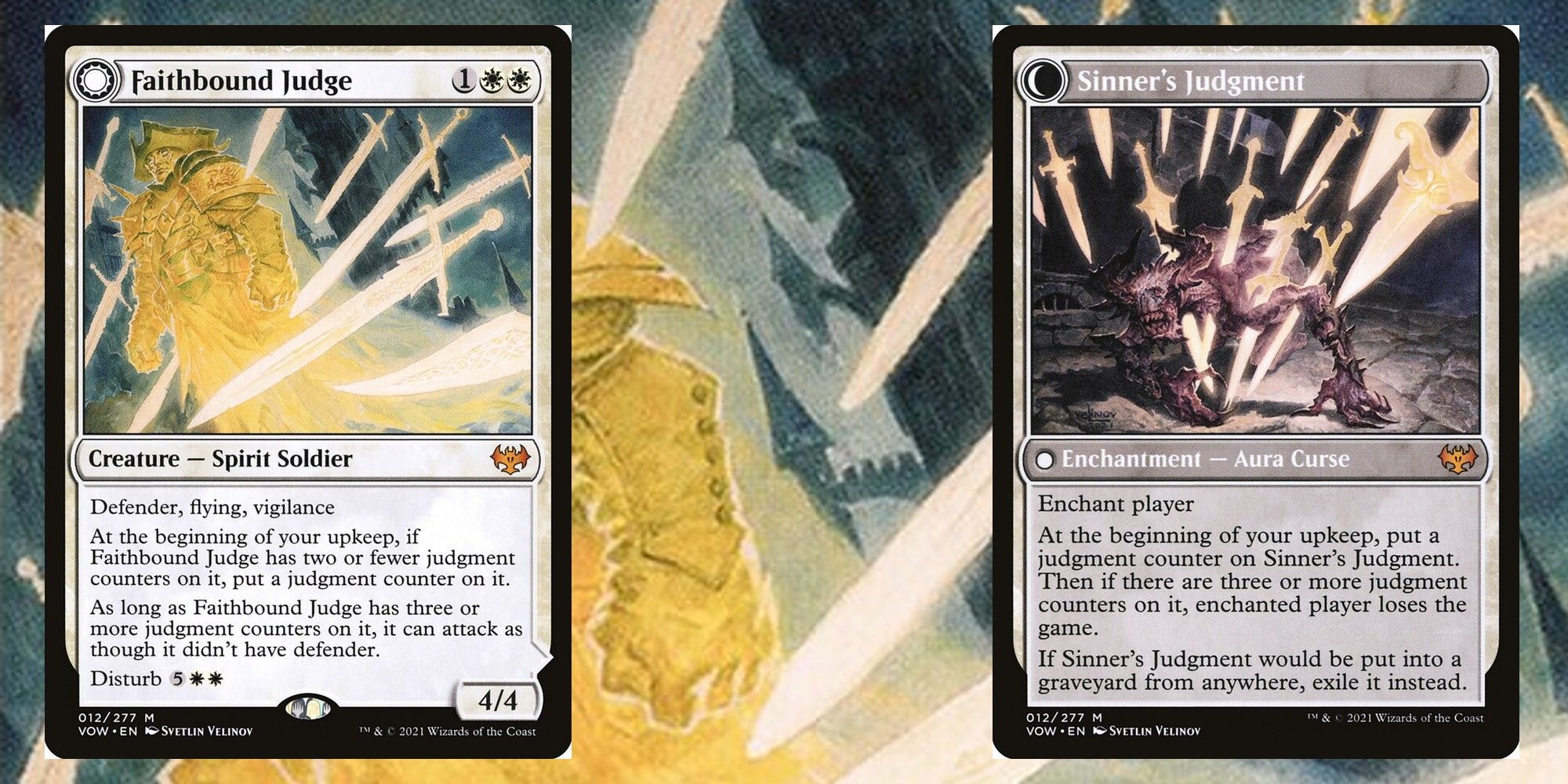 Spirits have commonly been considered among the most powerful creature types in Magic: The Gathering. Faithbound Judge is no exception as it gives you an alternate win condition that is exceptionally easy to accomplish. Initially, this spirit will be played as a creature. It’s a 4/4 flier with Defender, but that Defender keyword can be removed once it has three or more judgment counters on it. Aside from also having vigilance and costing three mana, that’s not even the beauty of this card.

Opponents might not want to destroy Faithbound Judge because when it’s in your graveyard, it can be returned for its Disturb cost. Seven is a little steep, but this is Commander so, it’s not an issue. Return it as the enchantment Sinner’s Judgment, enchant an opponent, and when it has three or more judgment counters on it, they lose the game. Even if not to win the game, this is an excellent strategy to knock out one opponent in a multiplayer game.