MTG: The 10 Best Reprints From The Warhammer 40,000 Commander Decks

Magic: The Gathering ventured into the grim dark future of Warhammer 40,000 with four commander decks set in a vast eternal war. Four prebuilt Commander decks, each one based on a faction from the Warhammer 40,000 miniature wargame – between swarming Tyranids, robotic Necrons, demonic Chaos, and the loyal Imperium, there are tons of new and original cards to play with.

These Commander decks also provide some fantastic reprints of Commander staples that you may need for your next deck. With all-new artwork to spice things up, you don’t want to miss these powerful Commander cards. 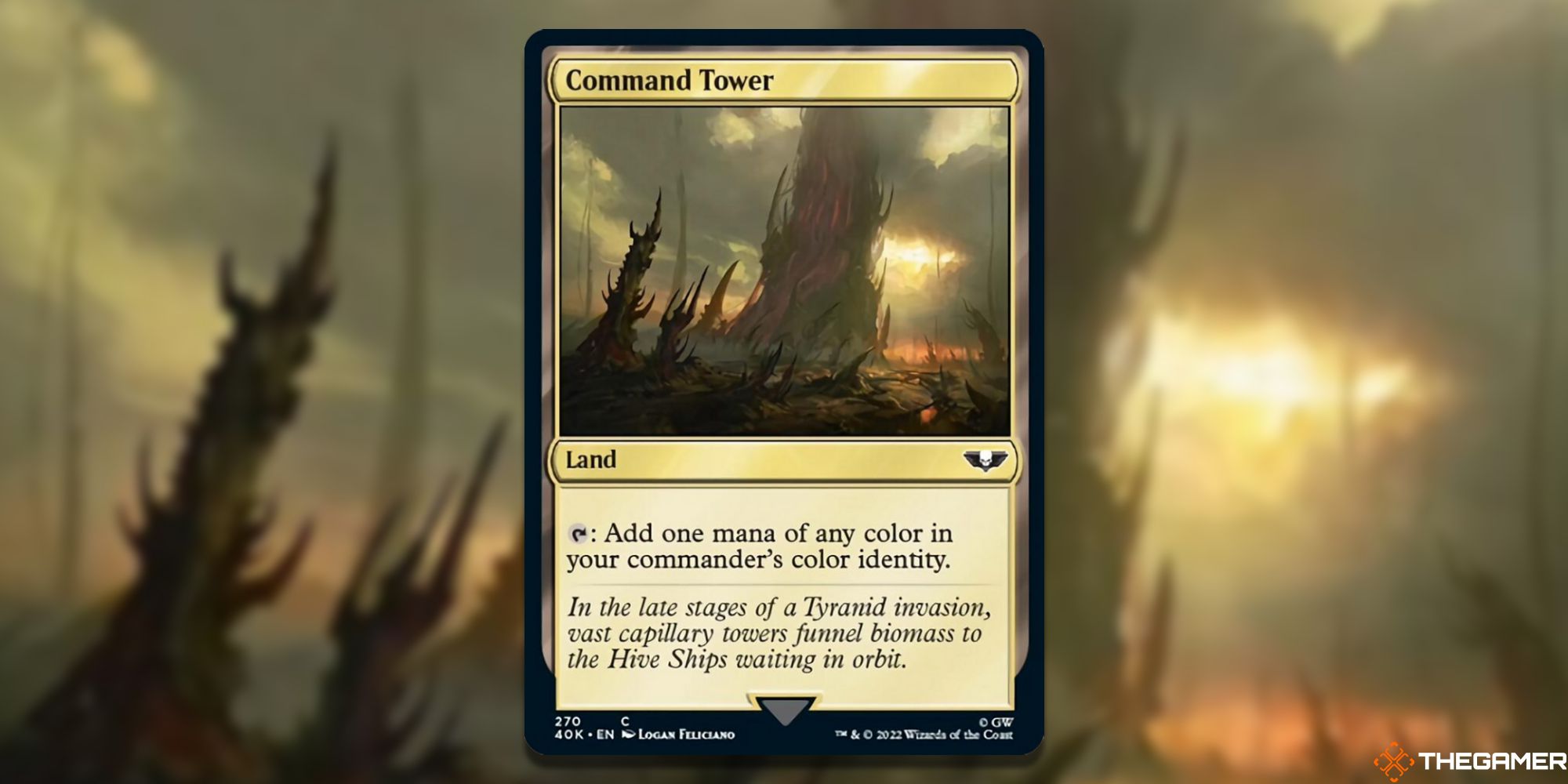 It might be a bit of a vague entry, but each of the Warhammer 40,000 Commander decks has an array of lands to help cast all your fancy creatures and spells. Across the four Commander decks, you can get access to a good collection of lands like the Filter Lands, Battle lands, Reveal lands, and Temples.

Many of the decks also have access to the classic Commander Tower, as well as good mana fixing from Exotic Orchard, Ash Barrens, and Path of Ancestry. The Necron Dynasties deck is the only one without a particularly powerful land package, but it compensates with very powerful other cards. 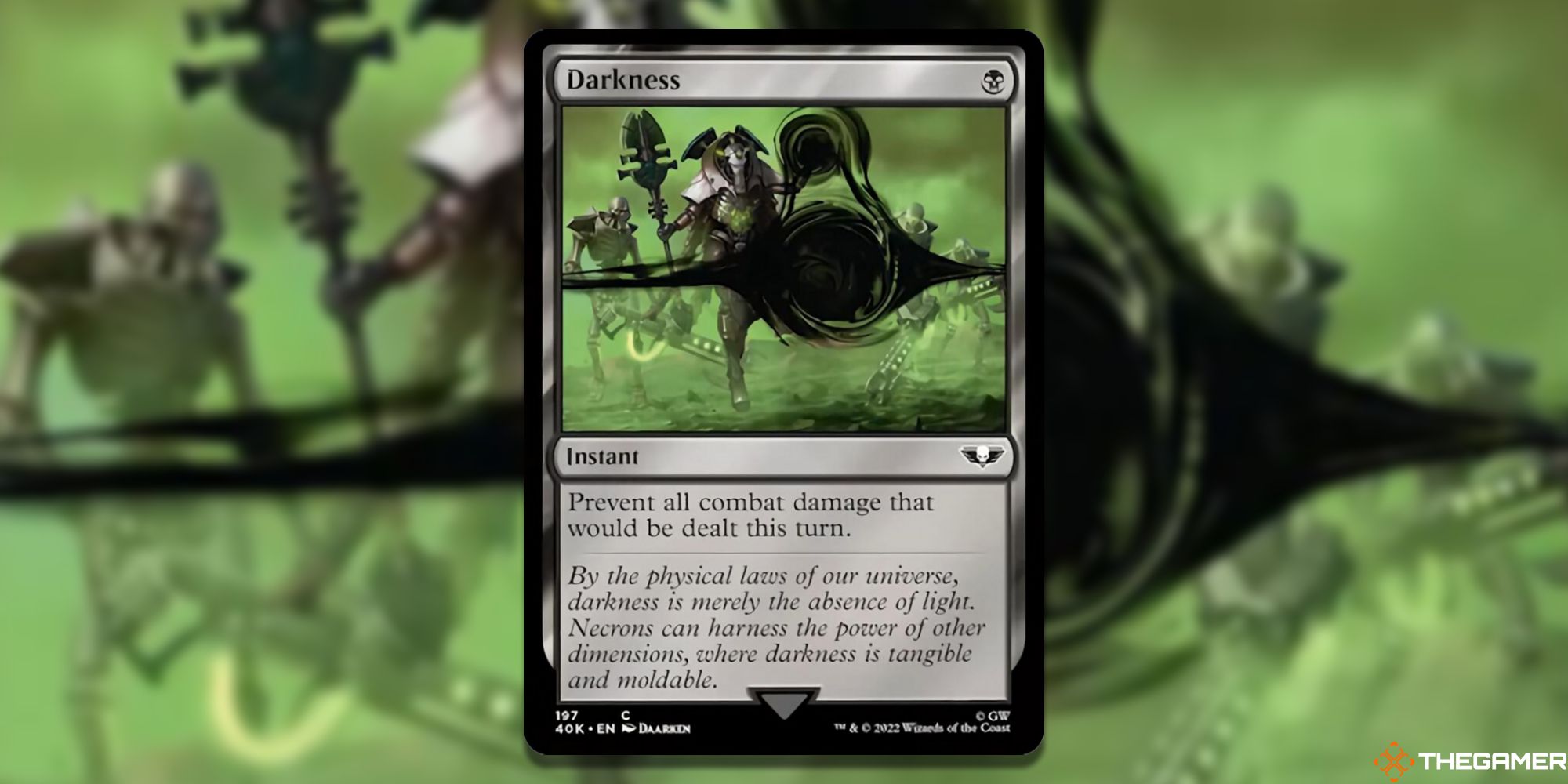 While not a particularly powerful card, this sneaky little instant prevents all combat damage done in a turn.

Darkness can be used to save yourself from a potentially life-threatening swing, to trick an opponent into making a large attack with no results, or to save an ally player from being taken out. 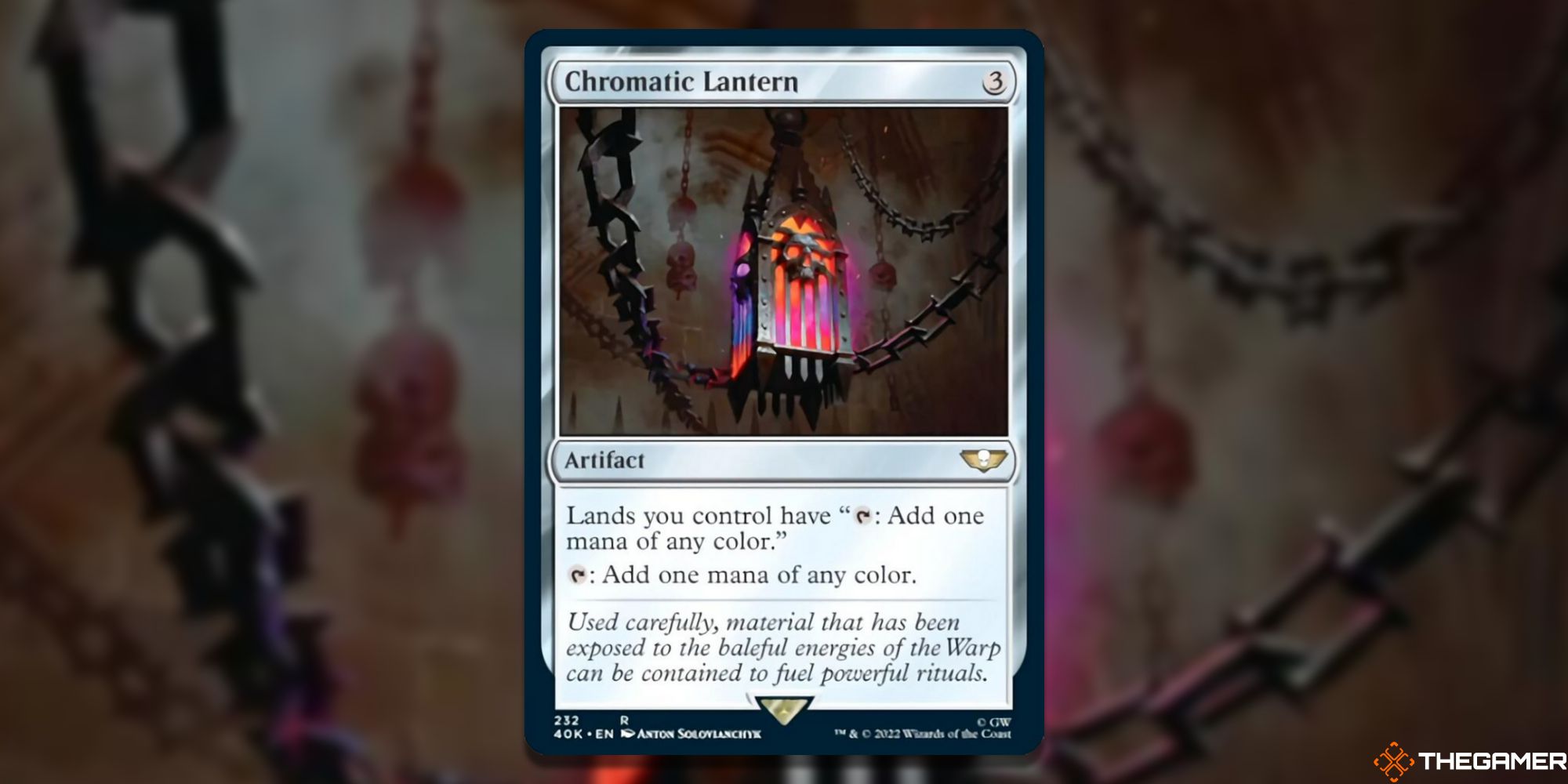 As one of the premiere mana-fixing artifacts, Chromatic Lantern is an essential card for multi-color Commander decks.

Chromatic Lantern doesn’t change the basic land type of your lands, it just gives your lands an extra tap ability for any color. As soon as this artifact enters your battlefield, you will never have to worry about tapping the right lands for the proper colors ever again.

7 Swords To Plowshares – Forces Of The Imperium 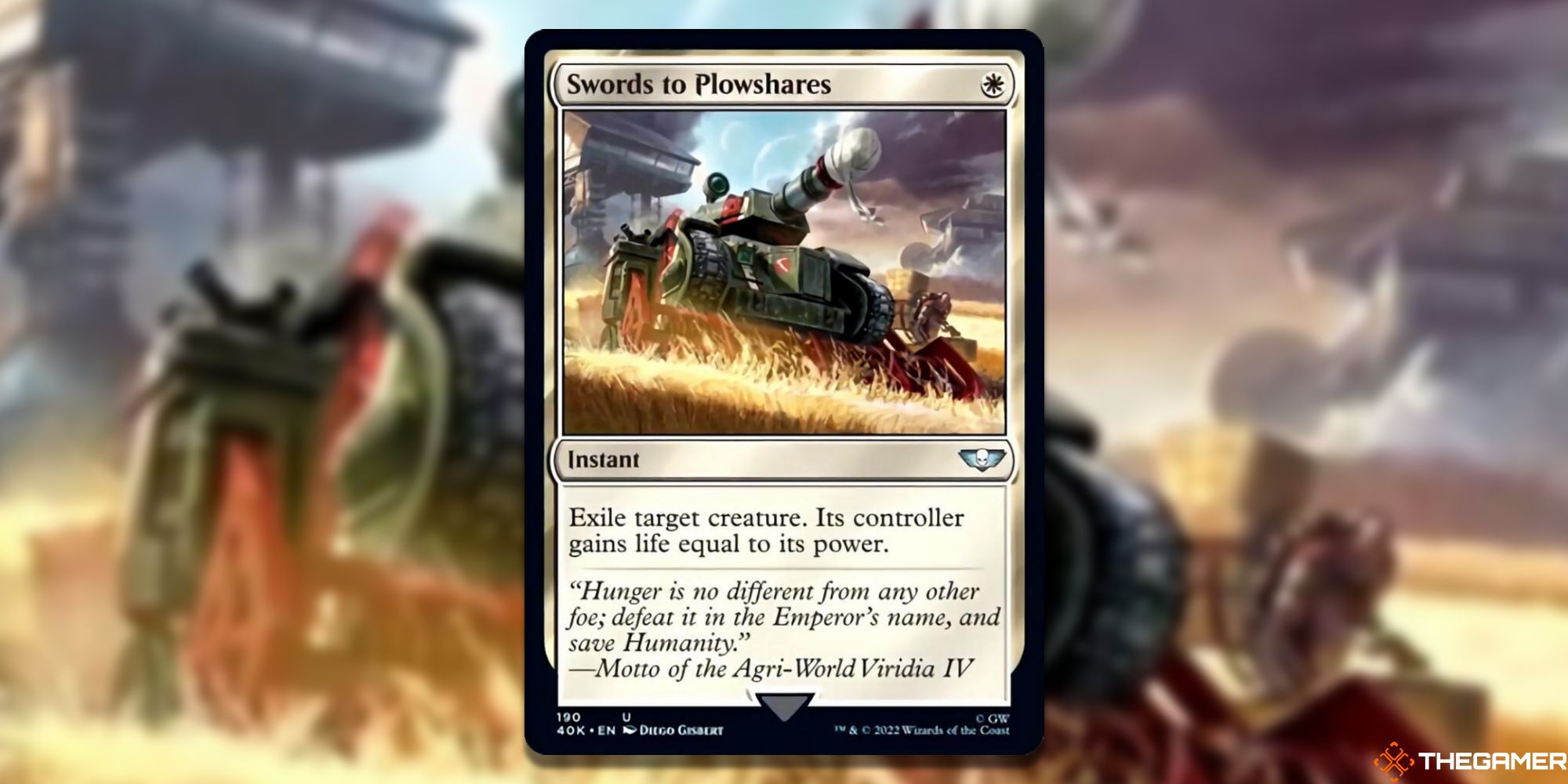 The premiere white removal spell, Swords to Plowshares is all but guaranteed to be included in any Commander deck with white in its commander’s color identity.

While not an expensive card, Swords to Plowshares has been reprinted close to 30 times, all players need at least one copy of the removal spell as a permanent way to deal with a creature. 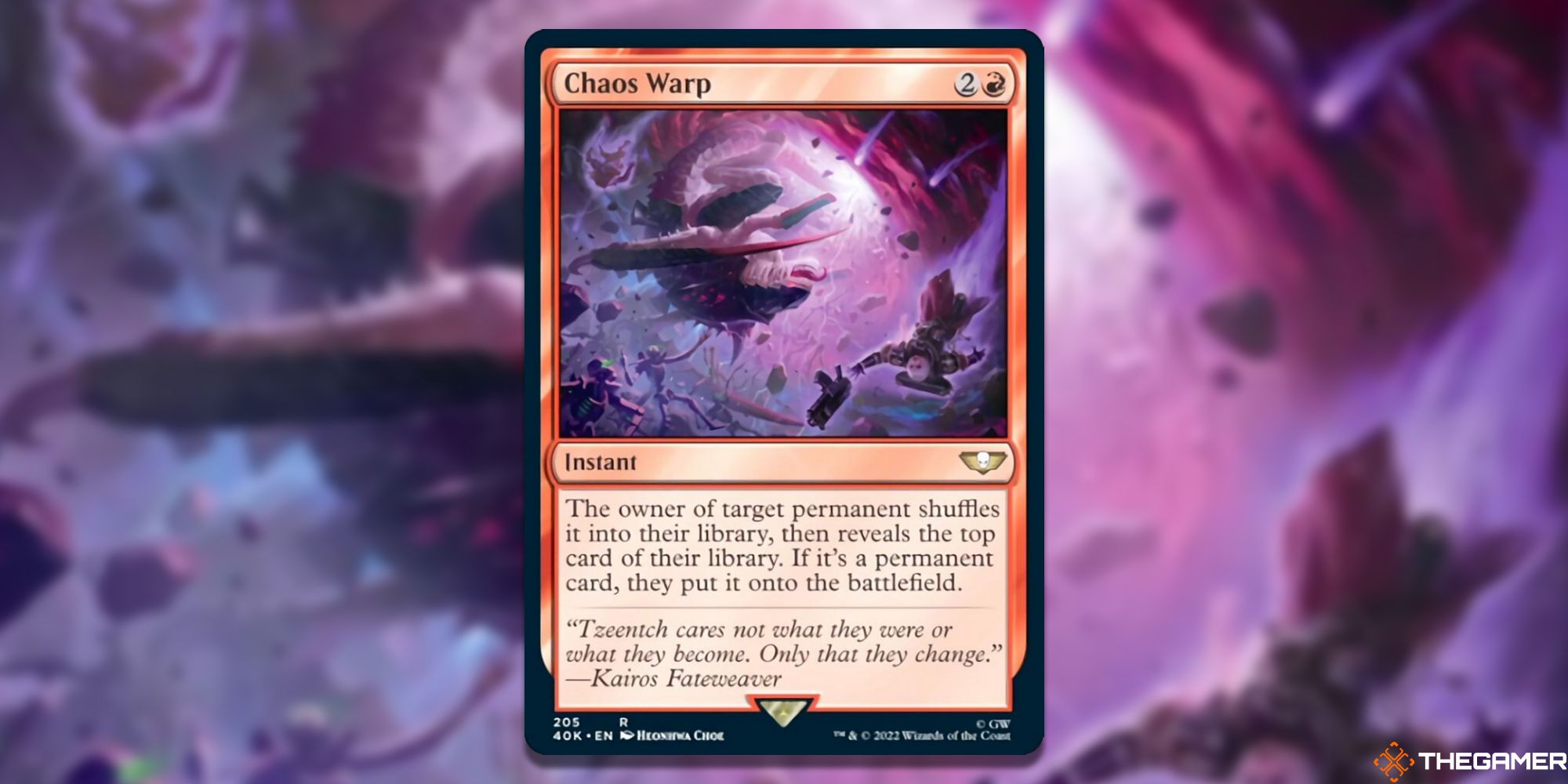 It is fitting that the Chaos faction from Warhammer 40,000 would feature a few of the most chaotic cards in Magic: the Gathering. Chaos Warp is a risky card to play, on the one hand you can immediately deal with any threat on the board, no matter the card type or who controls it.

The gamble with Chaos Warp depends entirely on what is on the top of your target’s library. If it’s a land or a non-creature spell, you’re probably safe while gaining some information on your opponent’s next draw. But if it’s a particularly powerful creature, enchantment, or planeswalker, you could have just given your opponent a huge threat. That’s the risk you take when dealing with Chaos. 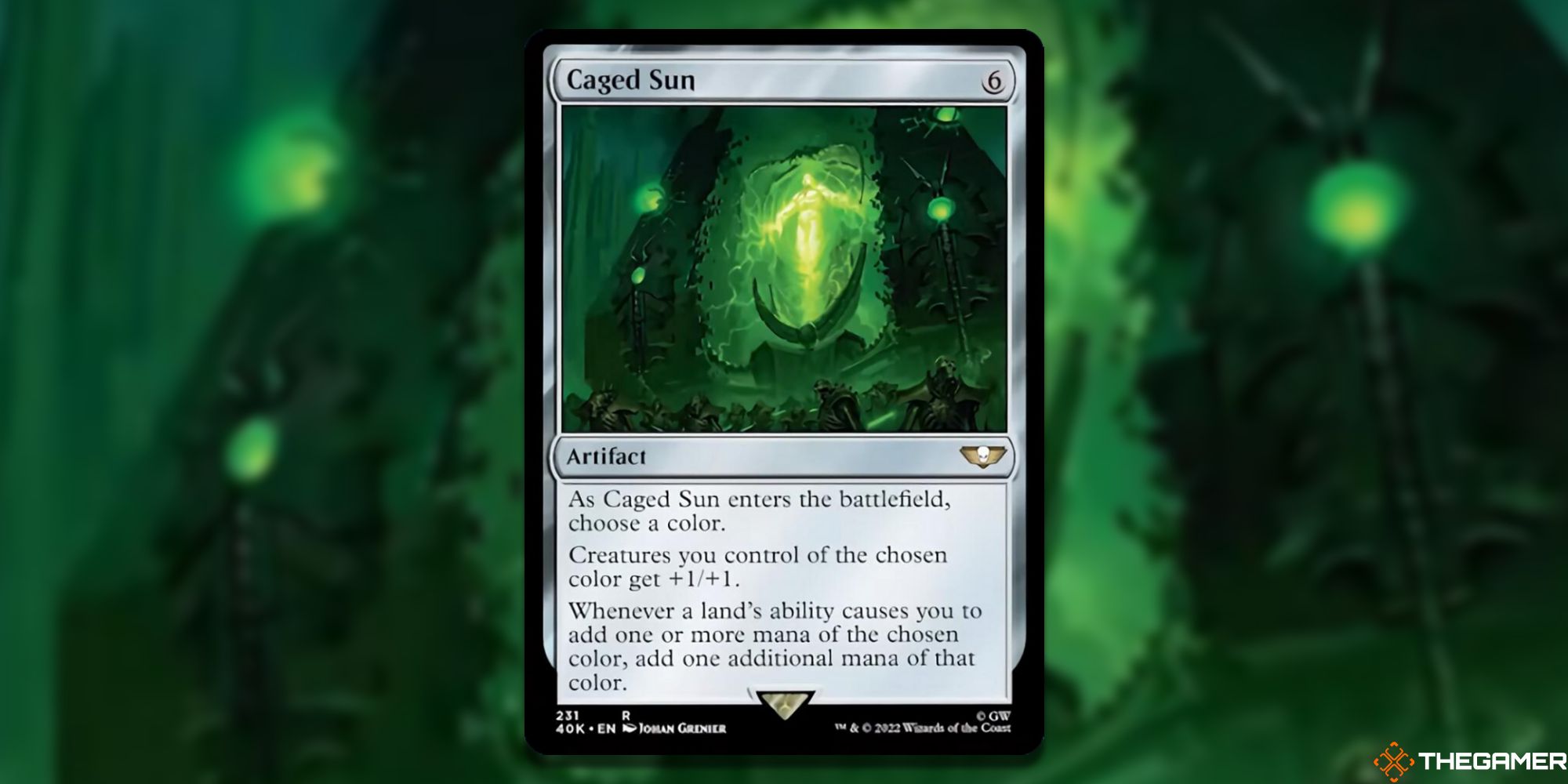 Mono-colored decks sometimes need a little extra power to help deal ramp up or give their creatures a boost, and Caged Sun is the answer you might be looking for.

Sitting at six generic mana, it can take a few turns to get to cast it. But once it’s in play and you pick a land color, your lands are tapping for double and your creatures enjoy a bit of extra power. 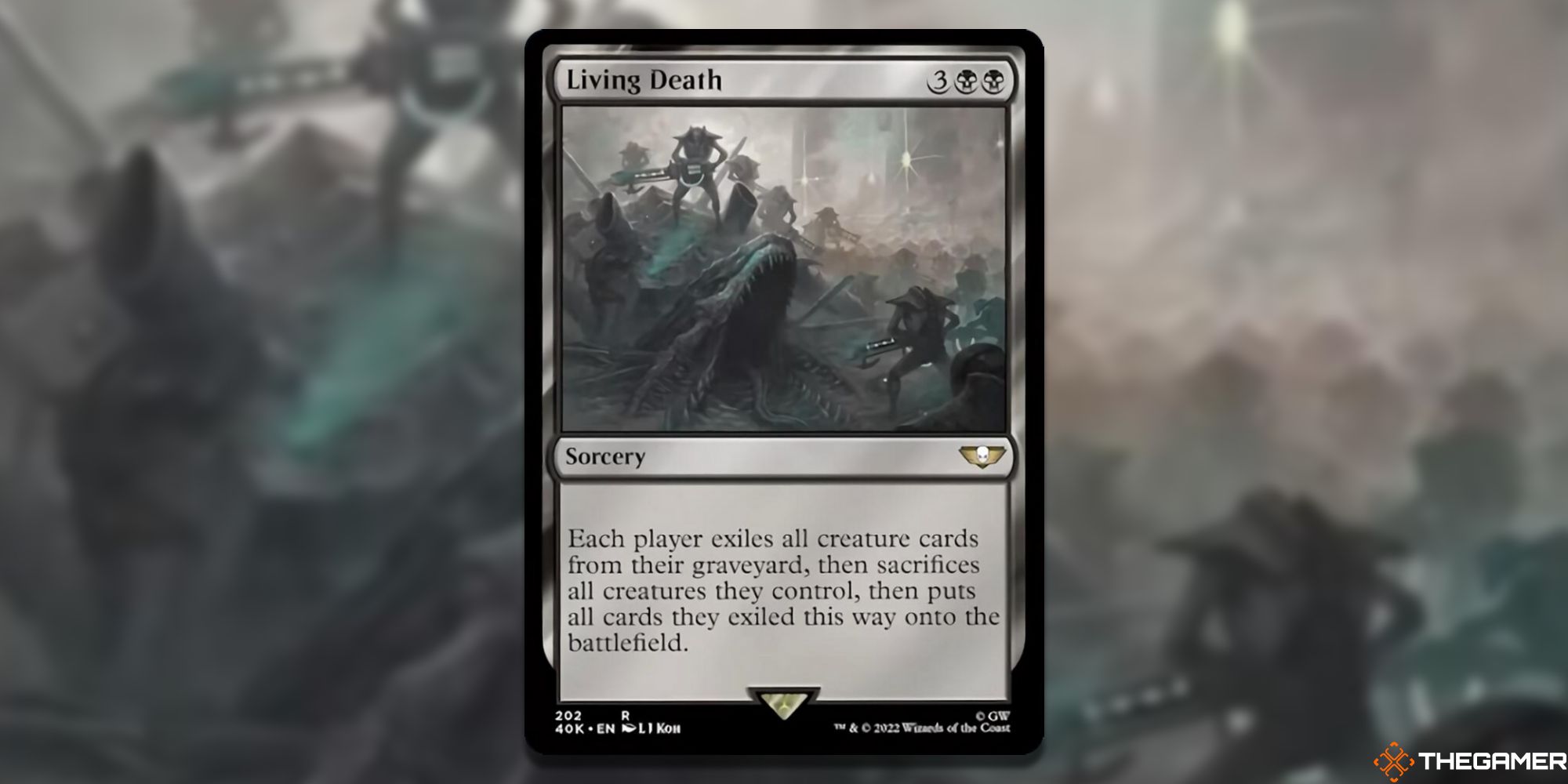 Another powerful card from the Necron Dynasties deck, Living Death has a long history of enabling some absolutely wild graveyard-based combos for you to abuse.

On the surface, Living Death is a mass reanimator spell, capable of making some late-game shenanigans if you’ve been able to exile an opponent’s graveyard or something equally tricky.

Going a little deeper, Living Death can provide players an avenue to infinite mana, enter the battlefield triggers, death triggers, and more. A fairly common combo with Living Death is Eternal Witness, Phyrexian Altar, and a good number of creatures in the graveyard to bring back.

3 Past in Flames – The Ruinous Powers 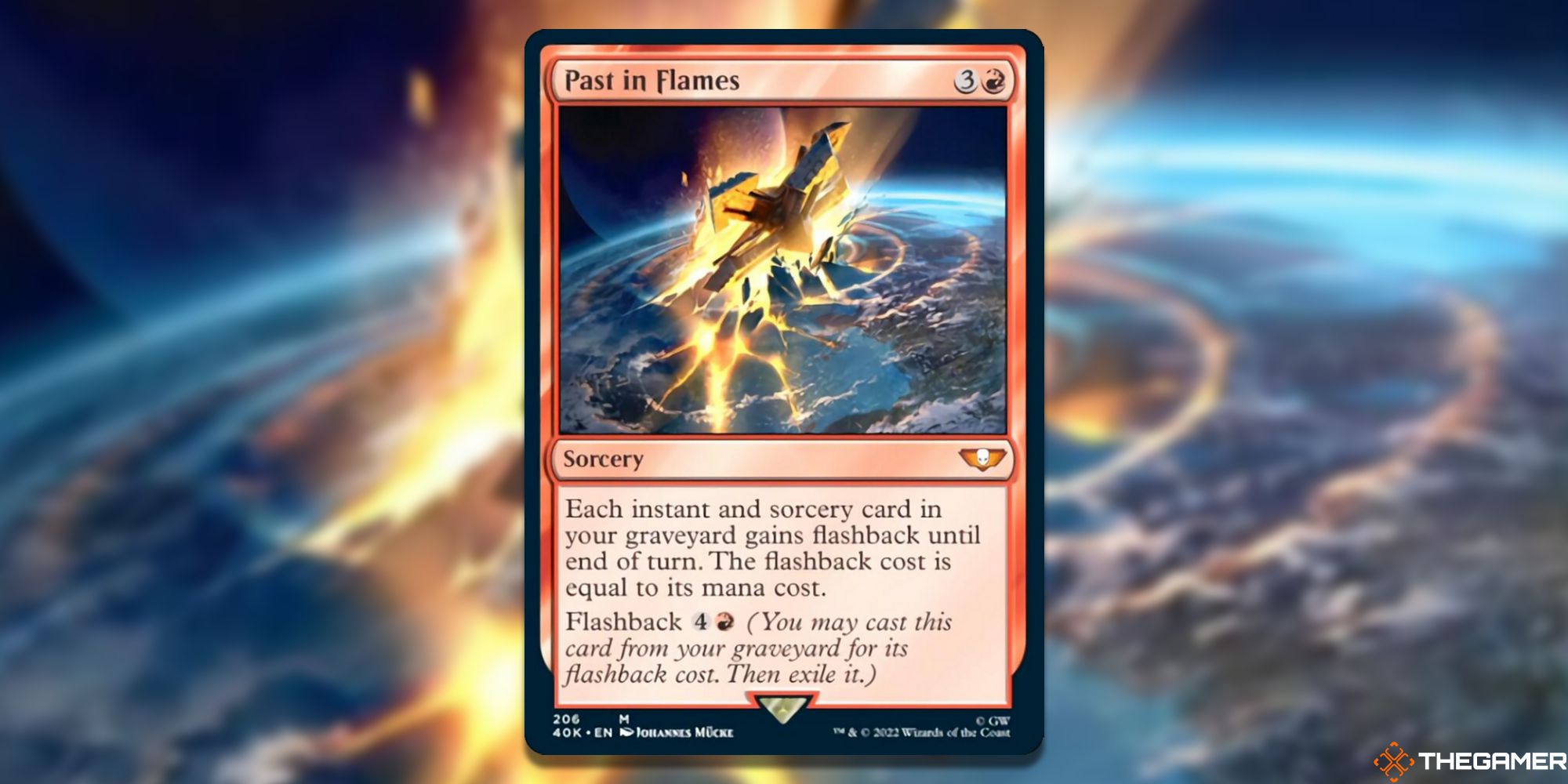 Have a lot of mana to spare and some fun instants and sorceries in your graveyard? Wouldn’t it be great to be able to cast them again, even just once? Well, Past In Flames has the answer to your extremely specific situation.

Every spell in your graveyard can come back with a vengeance, thanks to gaining flashback equal to its original casting cost. Now every instant and sorcery in your graveyard has a second chance to mess up an opponent’s game. 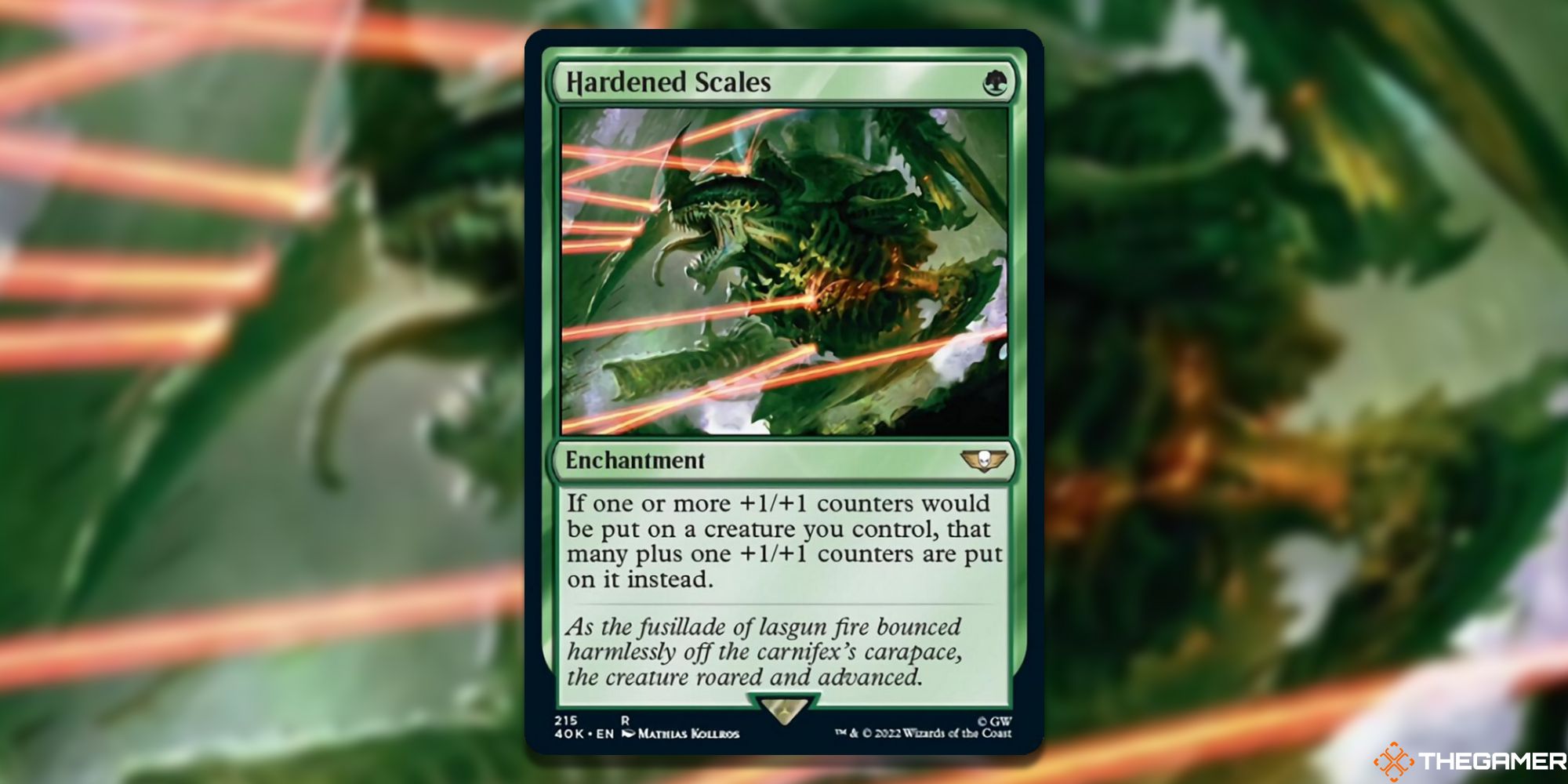 The Tyranids are swarming over the battlefield and are stronger than ever thanks to the combo engine that is Hardened Scales. With minimal setup, Hardened Scales can enable plenty of infinite power and infinite damage combos, as well as just giving a little extra value to your creatures.

At one green mana, Hardened Scales can come down as early as turn one, granting a gradual boost to any counter-based strategies you may have in your deck. Combine Hardened Scales with Vigor and Walking Ballista, and players can give their creatures infinite +1/+1 counters, or deal infinite damage; whatever fits your fancy.

1 Bastion Protector – Forces Of The Imperium 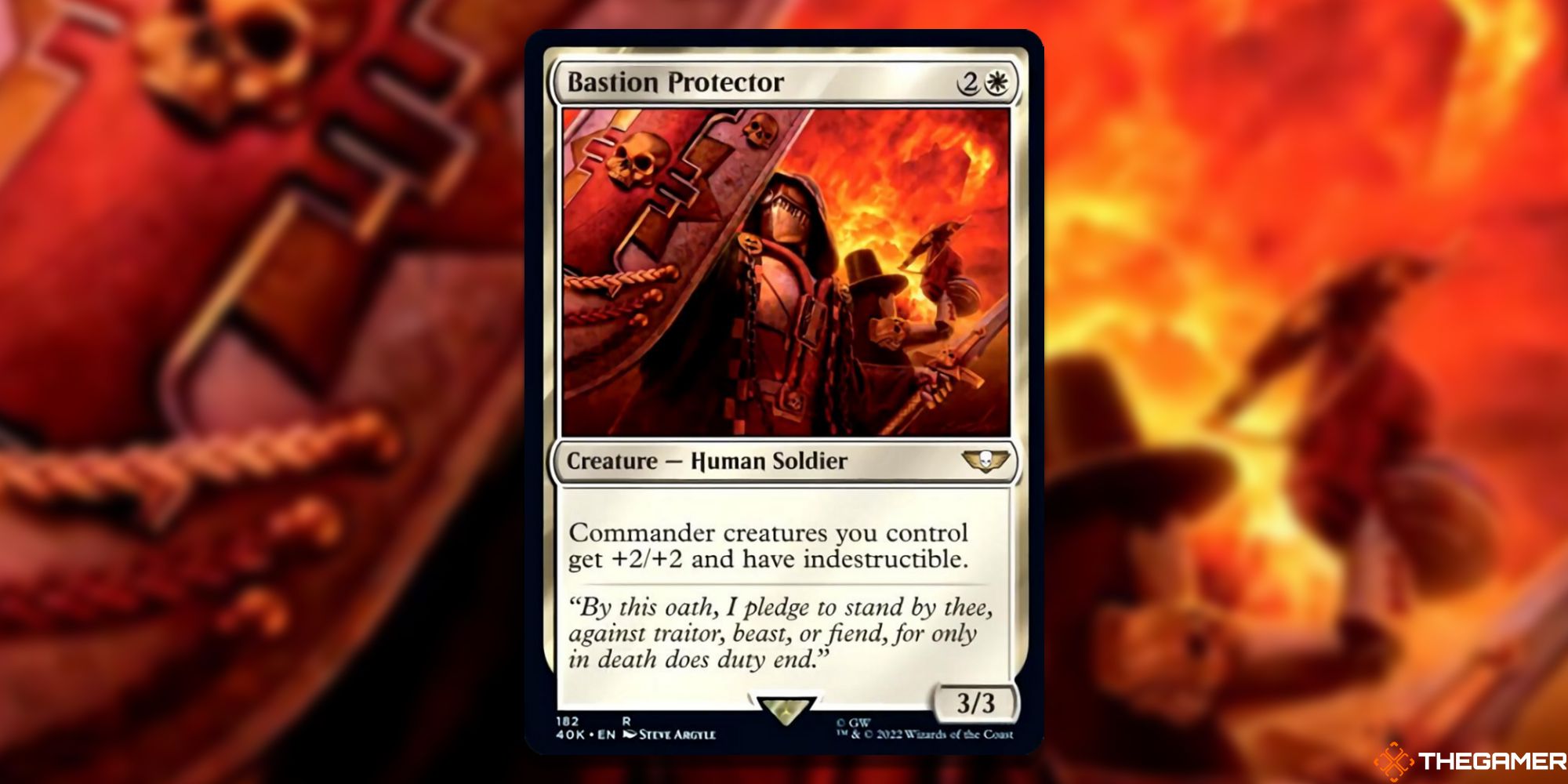 There are plenty of Commander decks that hinge on the survival of your commander for at least a turn or two. Bastion Protector is the perfect creature to give your commander a powerful upgrade as well as making them impervious to most forms of removal by making it indestructible.