NEO: The World Ends With You – How To Earn Max Scramble Slam Points

What Is The Scramble Slam? 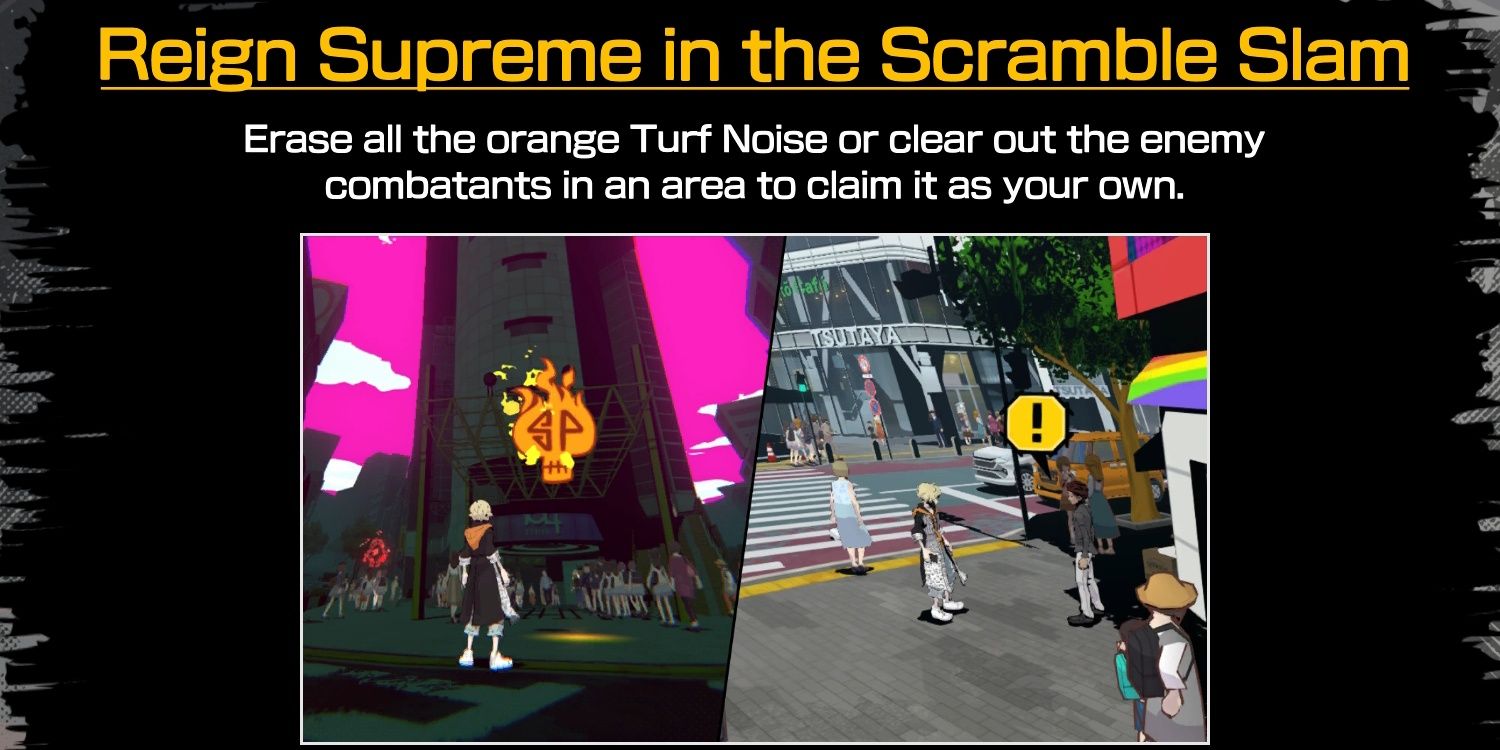 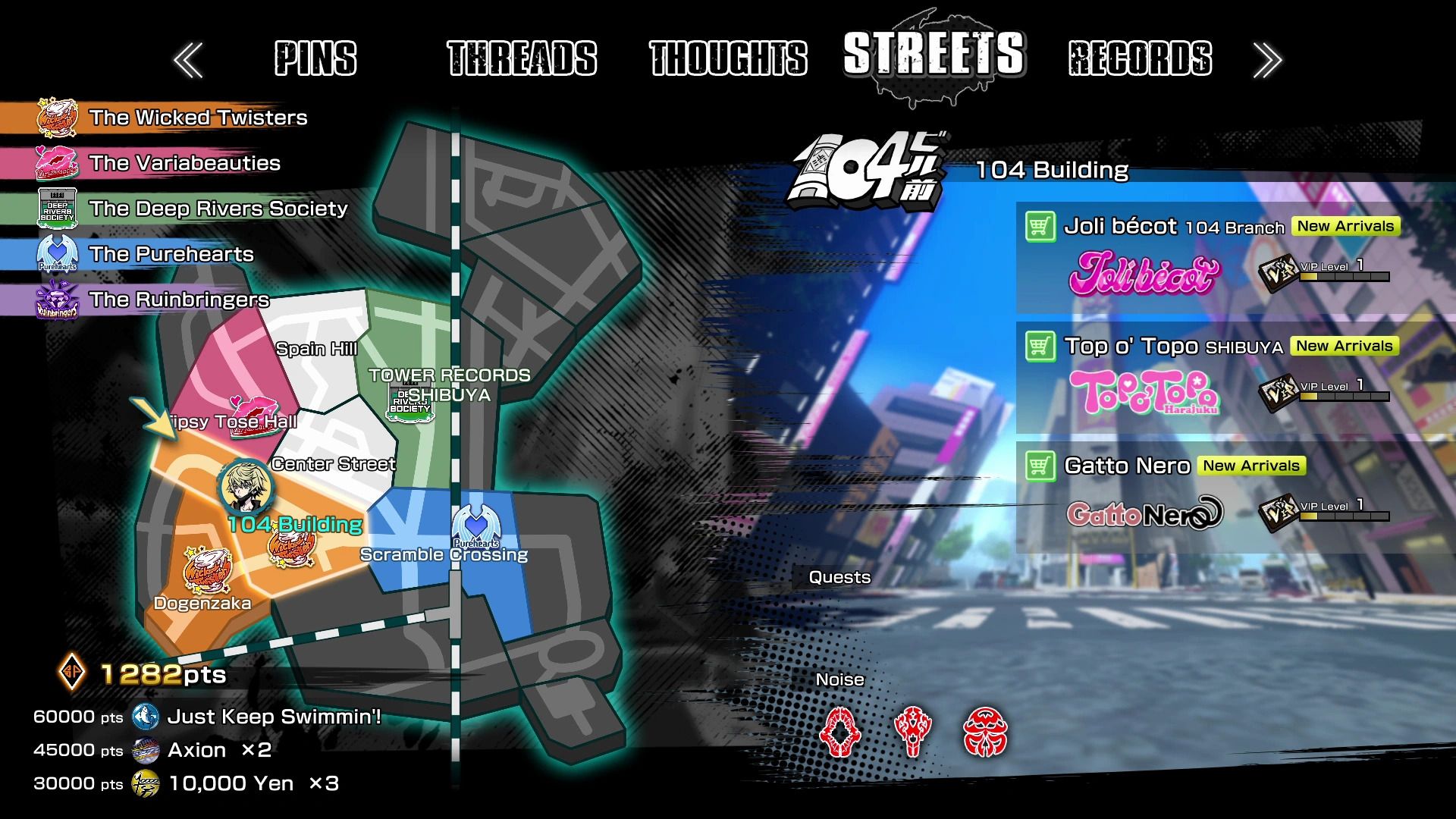 The more Noise you fight in a Chain Reduction, the more points you’ll be able to rack up. When you fight the orange Turf Noise or a rival Player, make sure to build up a high Chain Reduction first by drawing in Noise.

Use high Chain Reductions for each individual Turf Noise and rival Player that you encounter so that you can maximise your potential for Scramble Slam Points.

Use The Highest Difficulty Setting

Ultimate Difficulty is only available in the post-game, after you add Joshua to your Social Network on Week 3, Final Day.

Fighting Noise like there’s no tomorrow will earn you some Scramble Slam Points, but being methodical about how you defeat them will net you more. Performing Beatdrop combos on enemies will help you to earn the most points as you fight.

One way to do this is by using a mixture of weak Pins and strong Pins. Weaker Pins allow you to perform more combos before you defeat the Noise, and the stronger Pins will make sure you can finish off the Noise, especially when playing on higher difficulty settings.

While fighting Noise during the Scramble Slam, you’ll notice that some enemies have a ‘bonus’ multiplier above them. These appear when you successfully perform a Beatdrop combo. To maximise your Scramble Slam Points, you’ll want to make the most of this bonus multiplier.

As you build up Groove by performing Beatdrop combos, this multiplier will increase to a maximum of five. The points you earn will be multiplied according to this number. Wait until the multiplier has reached five, or until this Noise is the last enemy, before you defeat it.

Don’t worry if you don’t get the max number of Scramble Slam points the first time around. Once you finish the game, you’re free to replay the days, and the Scramble Slams, as many times as you like.

Racking up Scramble Slam points is significantly easier the second time around. You can use all the Pins you’ve collected throughout the game to defeat the Noise on higher difficulty levels, create higher Chain Reductions, and build up the most bonuses. 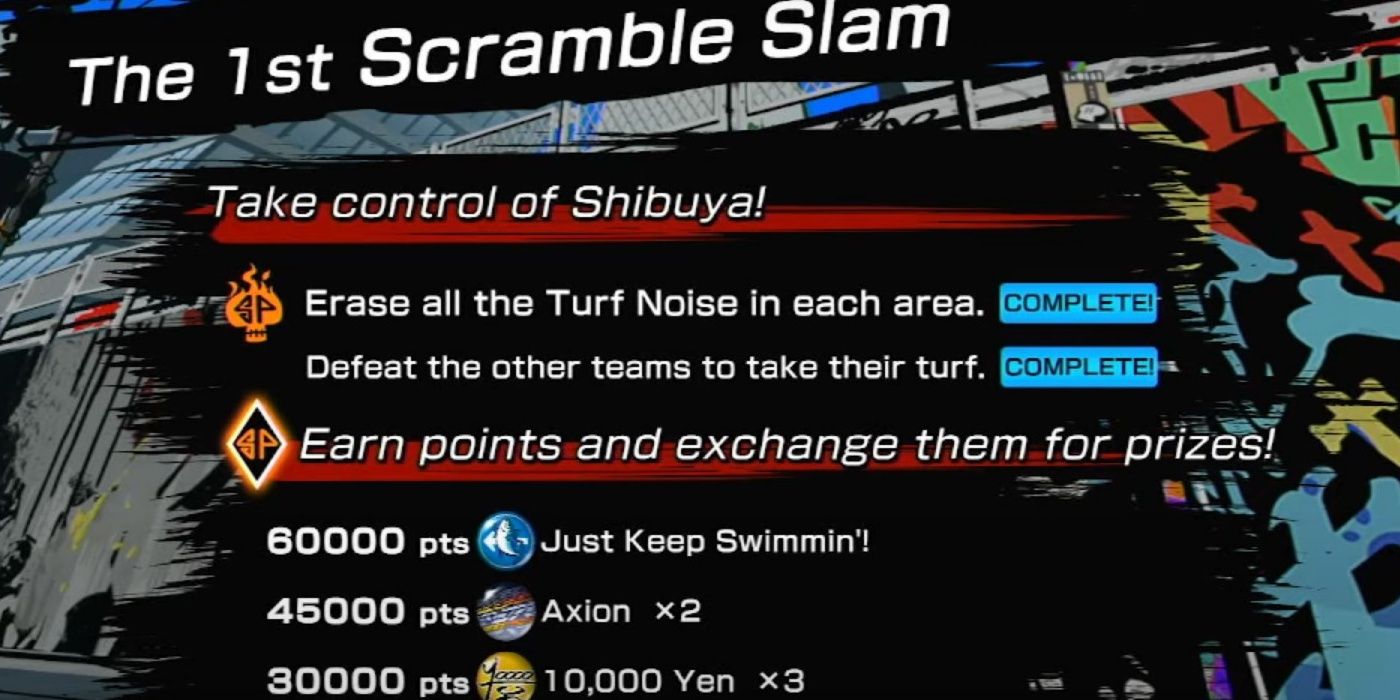 If you engage five Noise before a Turf Noise, the encounter won’t include the Turf Noise and you won’t gain any points. So, make sure your Chain Reduction is at four, then draw in the Turf Noise last. 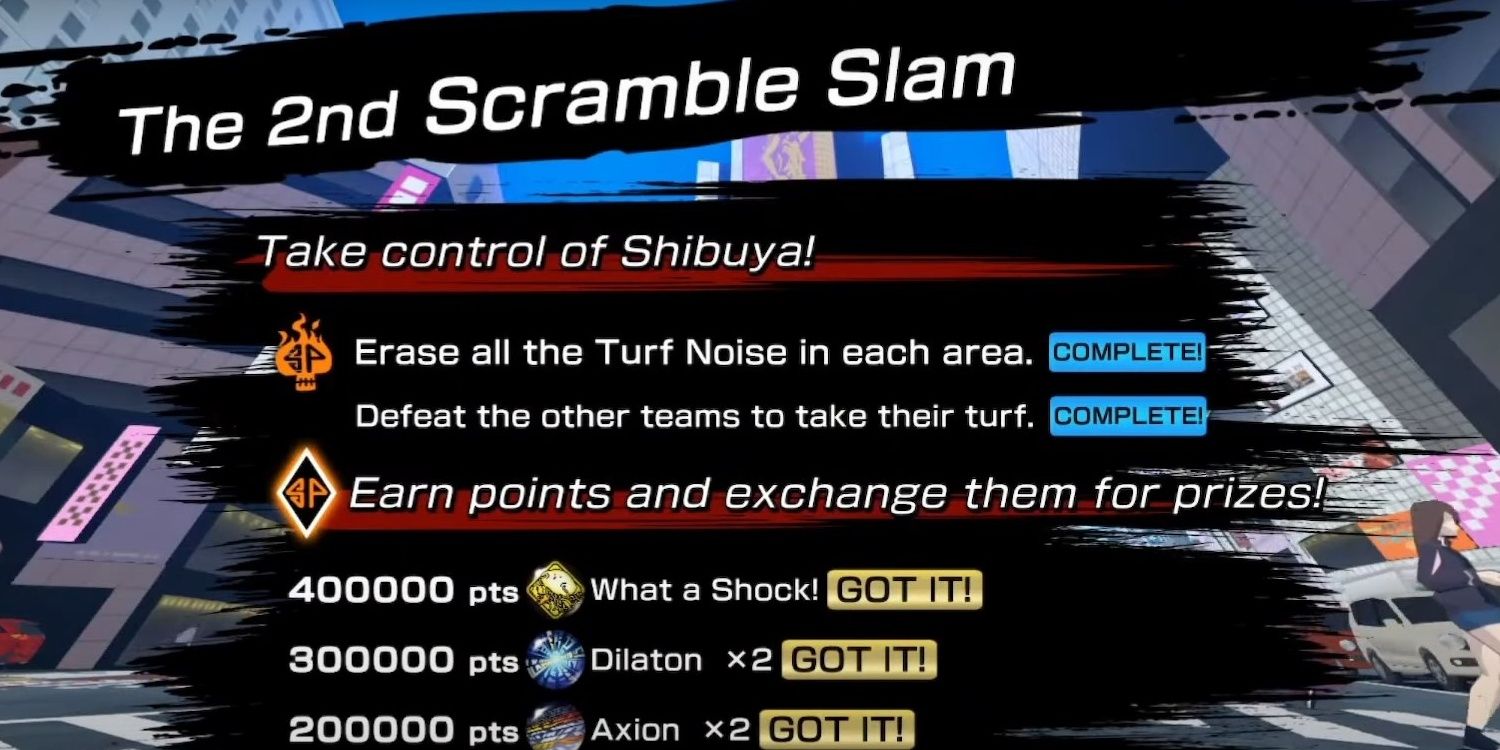 Once again, you’ll need to build up combos to gain the most Scramble Slam Points.

Look for Tsukihime in the Social Network — you’ll need to reach VIP Level 3 with ConyxCony to unlock this bonus. Now, you can draw in nine normal Noise and one orange Turf Noise or rival Player in one Chain Reduction.

If you encounter jellyfish Noise, you can use these to your advantage too. These Noise split into more Noise, giving you more chances to get points. The original jellyfish Noise has a wave-like pattern on its head, so make sure to leave this one for last.

You can also rack up more points by purposefully allowing other teams to gain areas on the map. By doing this, you give yourself more opportunities to beat rival Players, and therefore more chances to build up points.

Later on during this Scramble Slam, you’ll be given the option to either split up to guard more turf or to stick together as a team. You should choose to keep the team together, which leads to the Variabeauties taking Center Street. You can then take on Players from the Variabeauties to reclaim Center Street and earn more points. 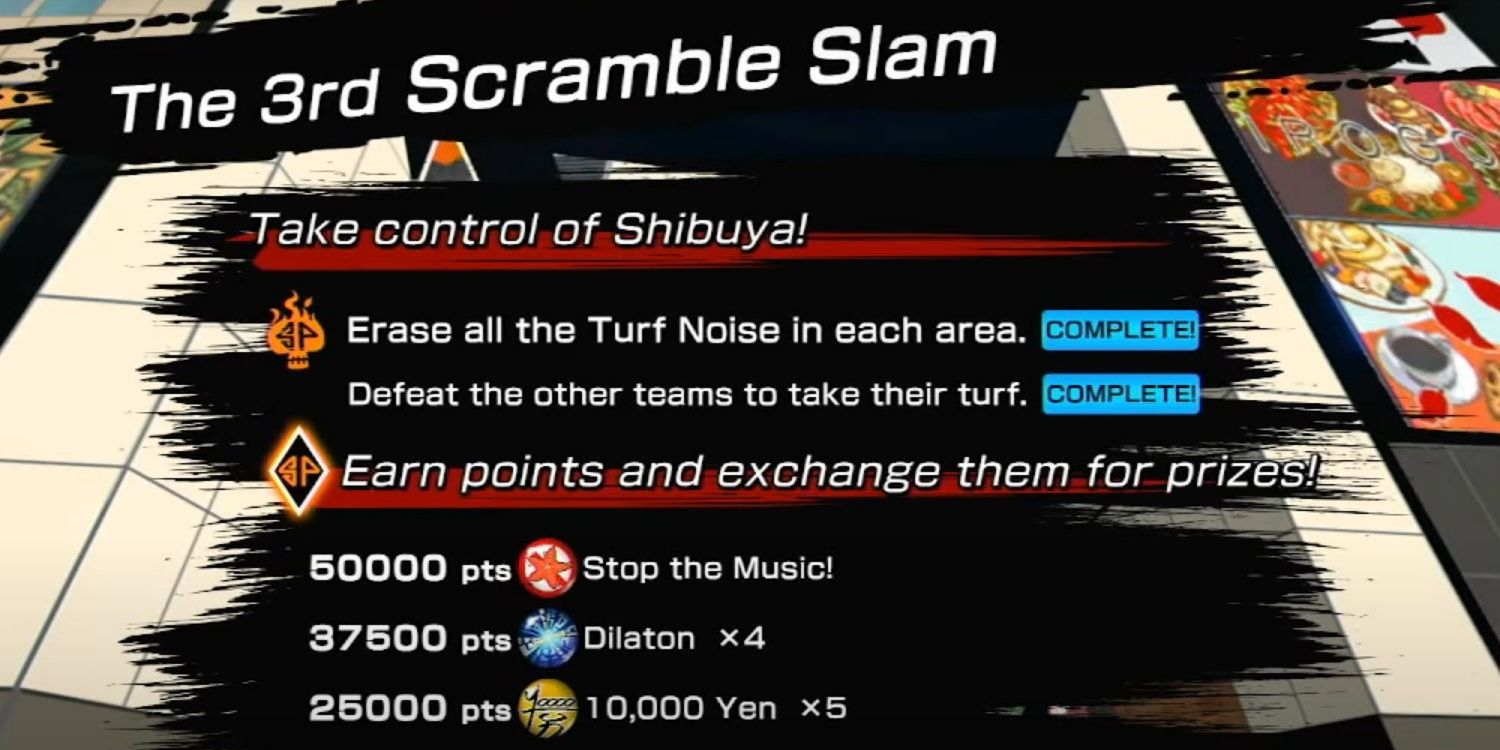 The third and final Scramble Slam works just like the previous ones. Fight high Chain Reductions, build up your combos, and you should be well on your way to earning lots of Scramble Slam Points.

However, before you jump into Week 2, Day 6, you’ll want to complete a side quest on Day 5 to increase the maximum Chain Reductions you can encounter. Complete the side quest Get by with a Little Help(er) on Day 5 to add Seiji-of-Some-Trades to your Social Network. You’ll then be able to obtain another Chain Extender using Friendship Points, allowing you to add an extra five Noise symbols to your Chain Reductions.

While Rindo uses his Replay ability during the third Scramble Slam, you can’t gain any more Scramble Slam Points when Replaying these fights.