Obsidian's The Outer Worlds feels even more like Fallout: New Vegas than I expected

Outer Worlds is one of my most anticipated games of 2019 and I’ve never played it. Still. Is that a bad sign? Maybe, but it’s Obsidian’s space-faring spiritual successor to Fallout: New Vegas. That’s quite a pedigree, and plenty to get my attention. At E3 2019 I’ve at least had the chance to see more of The Outer Worlds, courtesy of a half-hour behind-closed-doors demo.

And the short version? It looks even more like Fallout: New Vegas than I expected.

One of the aspects I’m most interested in, and it was visible in the trailer Obsidian showed Sunday at Microsoft’s press conference: The number of unique aesthetics on-hand in The Outer Worlds. It’s all very obviously the same game, and yet there are certain areas that resemble Soviet architecture and design, others that display Vegas levels of ostentation, others Art Deco.

And then there’s the town of Fallbrook, which we started our demo in. A smuggling town, it’s part Old West and part pirate shanty, a bit of form-follows-function that subtly clues you in on a place’s purpose before you’ve met even a single inhabitant.

Anyway, I could wax on about Obsidian’s art design for hours probably but it’s not the crux of the demo. We quickly met up with Catherine Malin, one of Fallbrook’s key residents. “Come for vice or virtue? Because we only sell one here,” she greeted us with, before giving us a job. Malin wanted us to infiltrate and conquer a local “boarst” factory, a word that’s about as disgusting as the product it describes.

Apparently the local corporations have bred “cystipigs,” pigs who grow extra meat sacs on their necks which then slough off when matured, ready for harvesting and packaging into what Obsidian called “sustainable meat product.” Sorry, I should’ve told you to get a bucket ready before reading that paragraph. 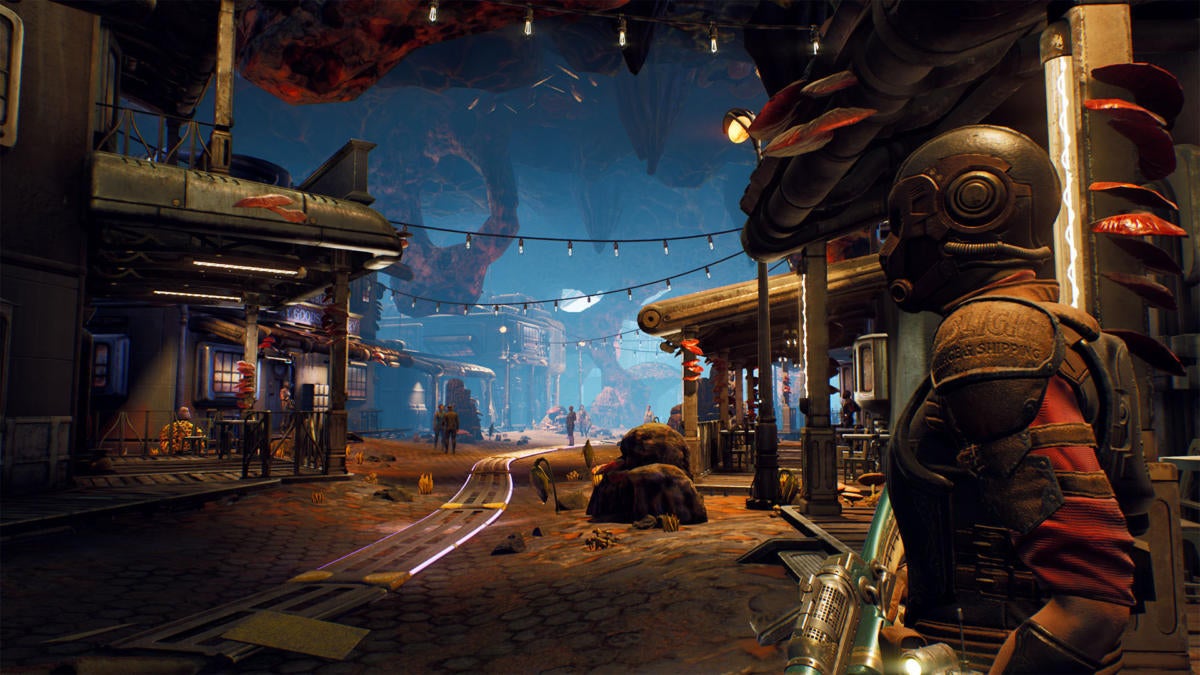 Fallbrook in The Outer Worlds.

Charm and Intimidate checks showed up almost immediately, indications that this is definitely an Obsidian game. And they kept showing up in almost every single dialogue choice. It feels like Obsidian is drawing on its experience with Pillars of Eternity to inform Outer Worlds in this respect, even more than the scattered skill checks in New Vegas. It’s very promising for those who want to actually roleplay.

Other aspects are equally likely to get RPG fans hot and bothered. This being what I assume is a fairly early quest, Malin laid out every method of infiltration. We could go in guns blazing, ask “Duncan” for a disguise, or enter through the monster-infested sewers—the entrance of which, in a nod to overdone tropes, is hidden behind a waterfall.

We also had two companions with us, Ellie and Nyoko. One’s an alcoholic big-game hunter, the other a fast-talking medic. A side note: At higher difficulties, companions can die permanently. Be careful, I guess. 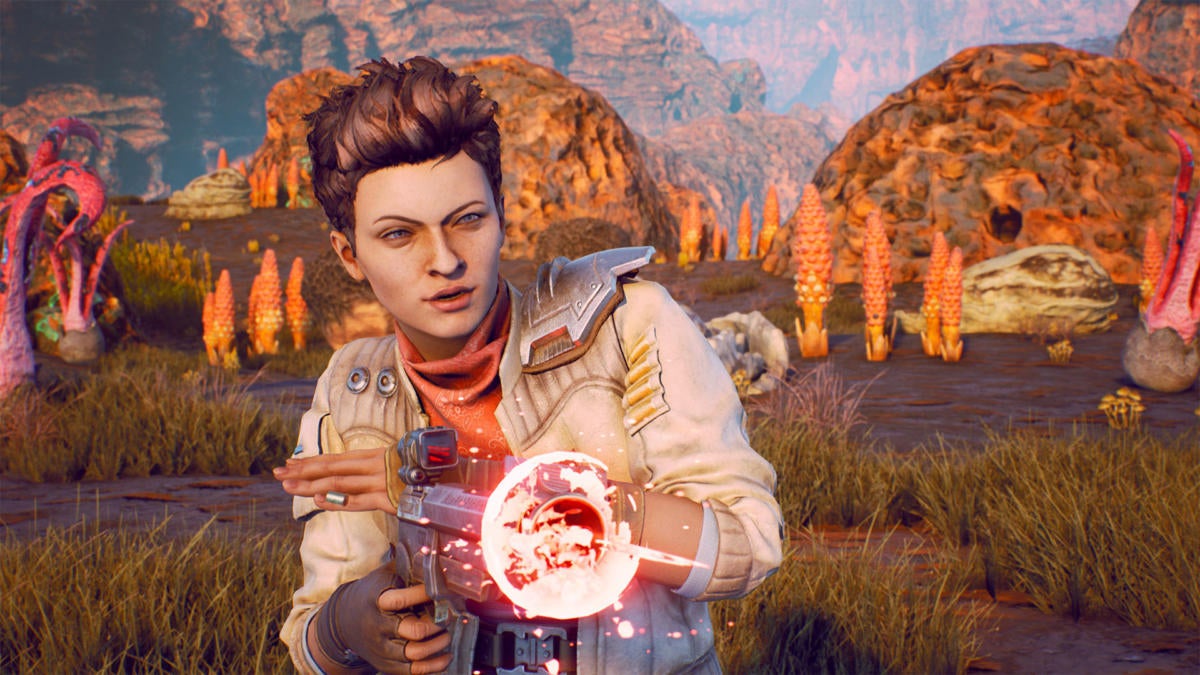 Ellie joined us on our journey.

Exiting to Monarch, the more open part of our demo, we had to fight through a few creatures on the way to the factory: Mantisaurs, Mega Raptidons, and so forth. Some backstory: Apparently Monarch was originally known as “Terra-1,” the first planet to be terraformed, but the process went wrong and instead of killing the native fauna it transformed them into murderous monsters. The rest of the corporations abandoned the planet, but Monarch back-stabbed them and took it over, resulting in a blockade that encircles the planet.

As Obsidian tells it, the other corporations started spreading propaganda about Monarch, that it’s “inhabited by cannibals, monsters, and worse…the unemployed.”

If you haven’t noticed, there’s a strong undercurrent of corporate malfeasance and class struggle at play in Outer Worlds. It crops up everywhere, from guards asking for identification papers to the aforementioned cystipigs and their horrible treatment, to the way robots on the factory floor are equipped with lethal weaponry and can be hacked to turn on all denizens. Or, again quoting Obsidian, “They take termination procedures very seriously here.” 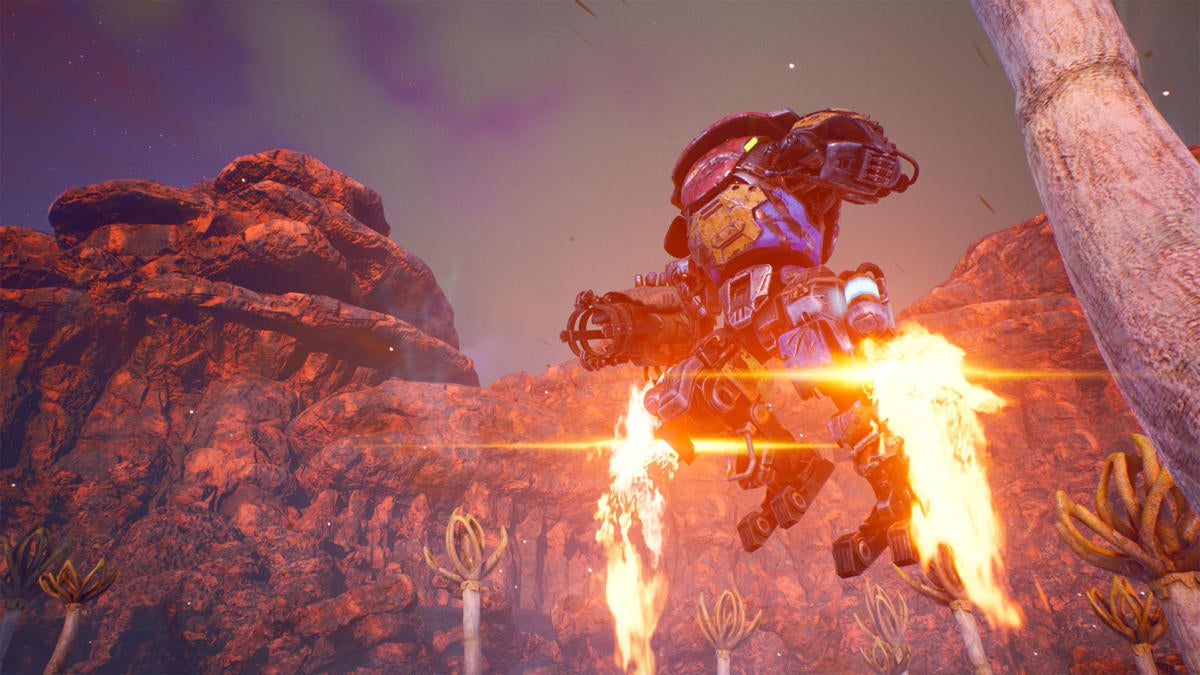 I’m excited to see these ideas expanded on in the full game. Obsidian’s always been top-tier when it comes to faction writing, and I’ll be curious whether there are good and bad corporations, or whether all of them are varying shades of evil as in New Vegas and Pillars of Eternity II. In fact, I’d bet on the latter.

The biggest surprise though is that Outer Worlds looks like it’ll be fun to play, not just well-written. Obsidian’s often struggled with the mechanics and systems in its games, but it’s borrowing quite a bit from Fallout: New Vegas and then melding it with interesting ideas of its own.

There’s no V.A.T.S., per se, but there is “Tactical Time Dilation.” So…yeah, there’s V.A.T.S., which should make shooting fairly bearable. The weapons seem unique and interesting as well, with chainguns filled with shock ammo, plasma weapons that can be charged like Halo’s, and what looked like a shrink ray in Sunday’s trailer. I hope there are a lot of weird weapons to break me out of the usual sniper-rifle and submachine gun rut.

And Obsidian’s stealth system seems genius. You can wear a disguise into the factory, which then lets you walk straight through—except a meter’s constantly ticking down when you move. The meter resets in each new area, so the challenge is to make it to the next door without running out. Even if you do, you can try and lie your way past the next set of guards as well—three times, with each check getting progressively harder. 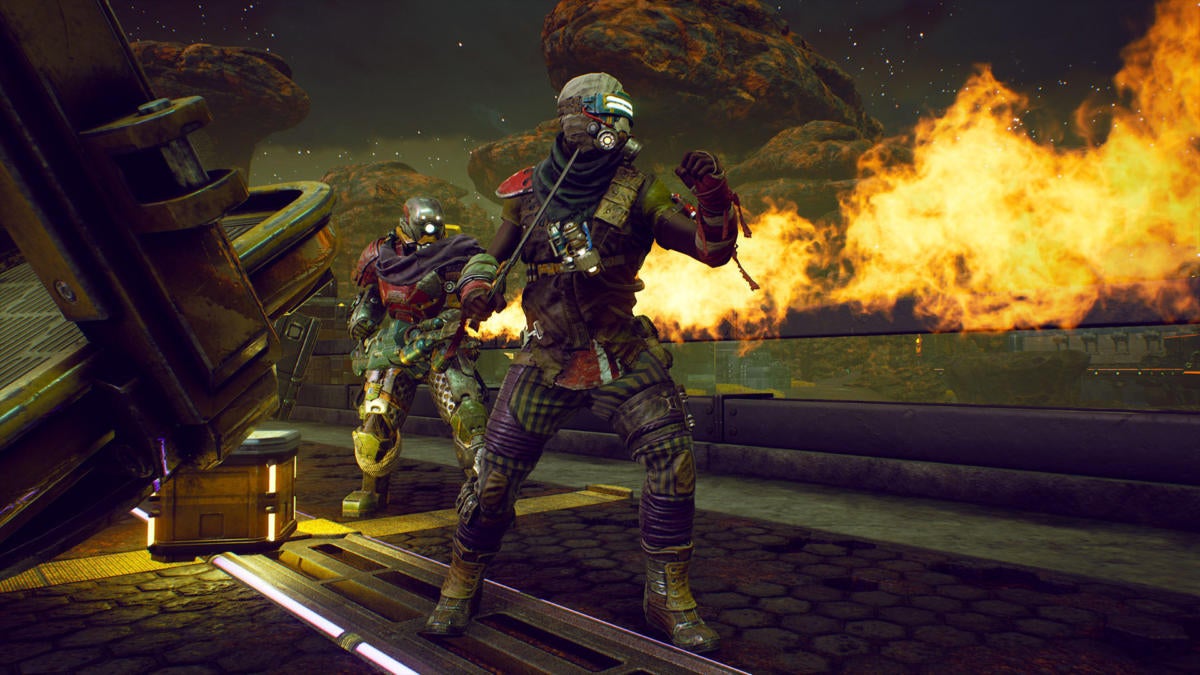 It’s a lot smarter than the crouch-and-hide stealth of games past, more “realistic” in a way, and as a Charisma and Sneaking player myself I’m excited to get my hands on it.

Lastly, the “Flaw” system seems really neat. We only got a brief look at it, but in certain situations the game will offer you a tough choice: Take a permanent disadvantage in one area to unlock an instant perk point, boosting you in another. In our case we took a lot of damage from robots in the factory, prompting the “Robophobia” Flaw. We’d take more damage from robots in the future as well, but we’d get a free perk point in the here-and-now. There’s a lot of potential for some unique and oddball builds depending on what Obsidian programs in as Flaws.

There are still a lot of unknowns, and it’s an Obsidian game—meaning we won’t really know whether it’s good until we’ve played through it. Obsidian’s still got a reputation for bugs to overcome, and this is also a “smaller” RPG than we’re used to in the modern era, which makes me curious about the pacing.

I am curious though. After this hands-off demo, The Outer Worlds is still one of my most anticipated games of 2019. Heck, probably even more anticipated coming out of the demo actually. Hopefully I can get over my revulsion regarding the word “boarst” before October.