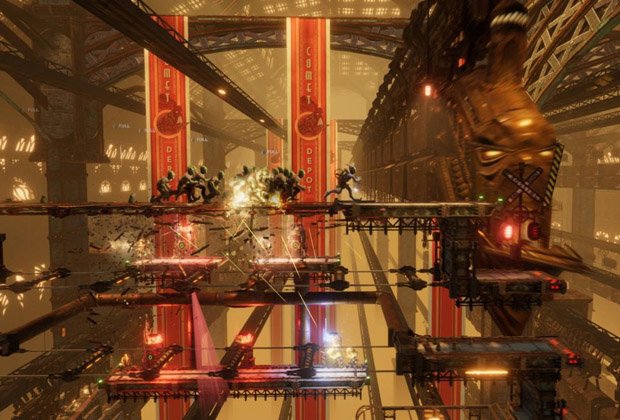 For targets that are slightly out of reach Abe can even attach rubber bands to projectiles to make them bounce off walls multiple times.

In order to build anything in-game, however, you’ll need to dig around for resources. Miscellaneous rubbish and bits of scrap that can be scavenged from bins, lockers, and fallen foes, as well as purchased via vending machines.

Thematically, it helps underline that grotty, industrial vibe that has been core to Oddworld for its entire existence. In terms of gameplay, crafting adds a bonus layer of depth while encouraging gamers to get creative without a tangle of menus to fight through. Lanning and the team were only going to add this system to Soulstorm if it felt truly worthwhile, he told us.

He also said that we can expect Oddworld: Soulstorm to last a minimum of 12 hours as you move from stage to stage. There’s more replayability to this latest instalment, too. The game actively encourages you to dive back into levels for multiple runs, posting your best times and scores while also tracking stats such as your Quarma.

With a scheduled release for 2020 on PC and consoles, we’re still a little way off seeing the sequel in a full, final state. However, what’s there right now is an experimental bevy of new ideas, yet a core package that is so unmistakably Oddworld.