Omega Strikers Preview: A Thrilling Competitive Game, But Can It Maintain Its Momentum?

Omega Strikers is launching without a campaign, but that’s not uncommon in 2022. Think about Overwatch 2, which appears to be a large patch for the original game, and still has no campaign, and they’re charging full price for that. Apex Legends has had huge success with the multiplayer-only approach too. We’re not here to discuss campaigns though, we’re here to talk about competitive multiplayer. Omega Strikers bills itself as a mix of Smash Bros., Rocket League, and League of Legends, but it’s a lot easier to get your head around. It’s Windjammers with special abilities.

We played a little of the Omega Strikers beta earlier this week, and when I say a little, I mean a little. My trusty colleague, Lead News Editor George Foster, and I spent a little over an hour trying out Omega’s characterball action. We both managed to get a game with each character in the starting roster, and largely enjoyed our time with it. I’ll go into more details, but the action-packed gameplay is good fun. Whether it has the longevity to maintain its playerbase after launch, however, is another matter entirely.

Described as a game “for the next generation of gamers,” as if that means anything at all, the gameplay functions similarly to a team-based Windjammers. Each character also has three unique abilities, which range from creating large walls made of tofu which block the core (that’s a ball to you and I), to laser pistols that damage opponents, to summoning little blobs of goo that can take shots on goal if the core hits them. 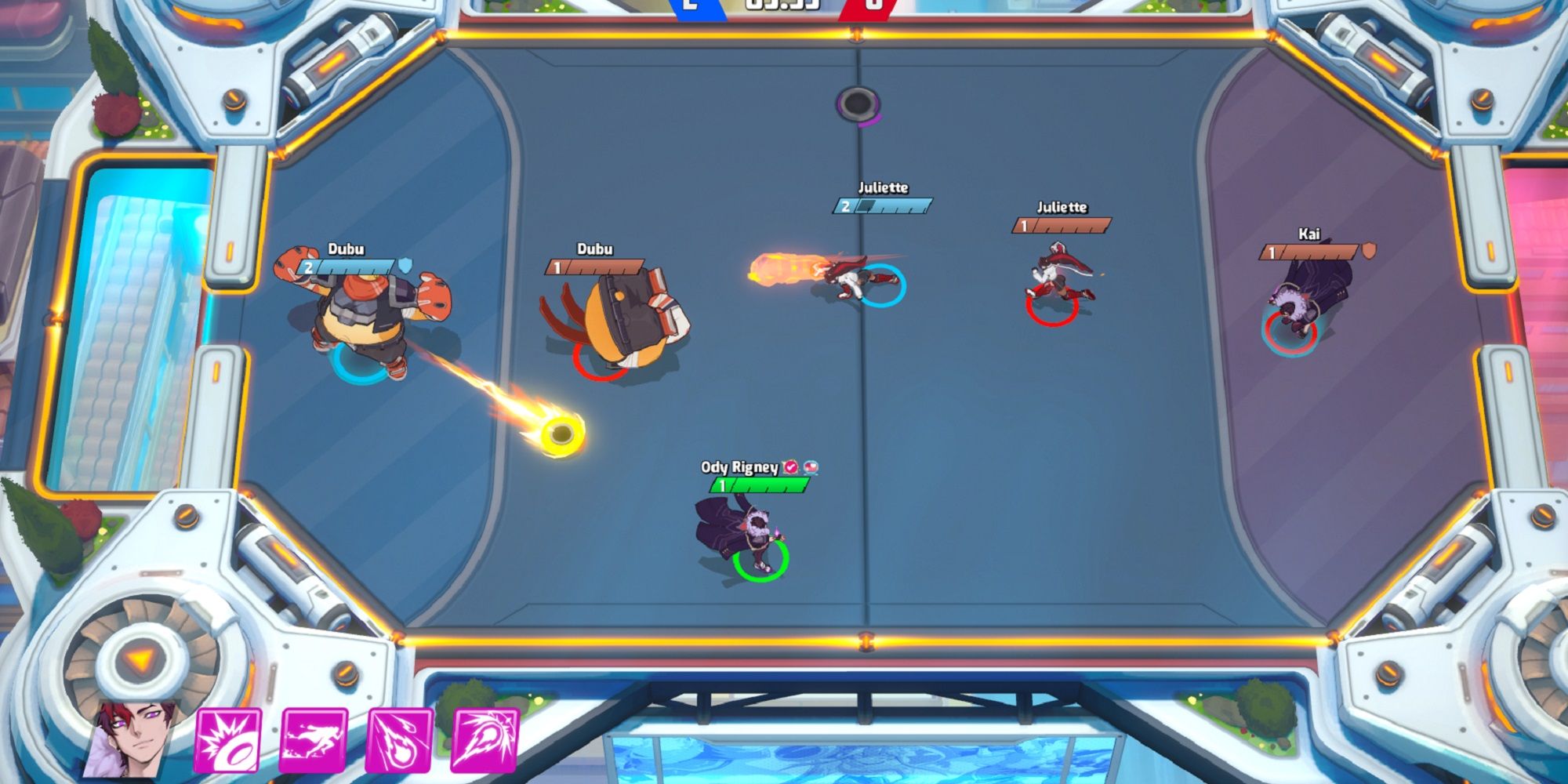 As you can probably tell from the laser pistols, combat also plays a part in the game. You can knock opponents back, block them from striking the ball (I’m just going to call it a ball from now on, sorry), and even bash them off the edge of the map if they’re standing close enough. There are plenty of viable strategies, and although few people opted for a combat-heavy approach, one team we faced rushed our goalie, knocked them off the map, and proceeded to score an easy goal.

Speaking of which, one player per three-person team is the dedicated keeper each match. You can queue specifically as a goalie, or you might get assigned it at random. I was awful in goal, but did my turn, whereas my esteemed colleague Mr. Foster was an expert with Dubu. However, there’s nothing forcing your goalie to stay between the sticks. Despite having a clearly marked ‘penalty area’ as such, it doesn’t keep the keeper in place. This does mean that your goalie has a bit more freedom, but we also found that in one match our designated shotstopper wanted to play striker so just… did. This could be a problem for solo queuers because – let’s face it – nobody wants to be stuck between the pegs.

If you do end up in goal, though, the matches are short, frantic, and fun. There’s an element of chaos, but teamwork pays off, and we quickly discovered strategies and combos that worked fairly well. You need to either be the first team to score five goals (and be in the lead by two goals) or be winning when the timer ends, and then you can queue again. It’s not bad to be stuck in goal once every few matches, especially if you’re playing with friends. It might well be a different experience solo. 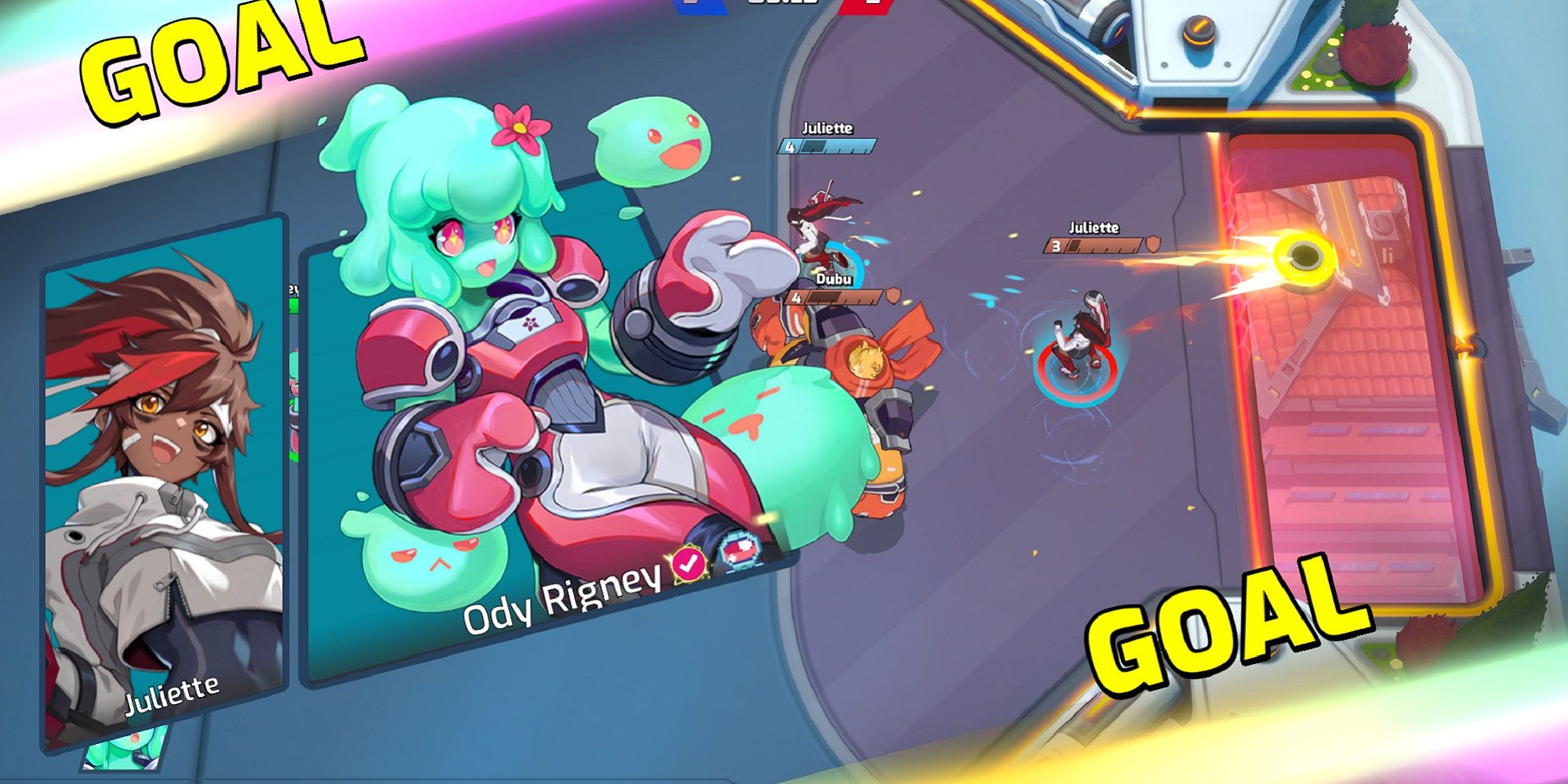 I’m pleased to say the devs explained that Omega Strikers has no loot boxes nor pay-to-win aspects. You have to buy characters to unlock them, and there are plenty of cosmetics and emotes available too. It’s hard to fully understand costs and currencies pre-launch, so I’ll reserve judgement for now.

I’d be remiss not to mention the strikers themselves. They are all unique in design and abilities, and the emotes and voice lines add plenty of character to each. Mr. Foster immediately fell in love with big hamster guy Dubu, and I really enjoyed playing with emo witch Era and armoured baller Atlas, albeit more from a gameplay standpoint than design. My favourite design was probably Drek’ar, who looks like a blue anthropomorphic dragon, but it’s safe to say there’s something for everyone in this diverse roster.

This might be a little unsurprising for TheGamer’s Apex Guy to say, but I think it could take a leaf out Respawn’s book and double down on the characters, creating comics, cinematics, and relationships between them to really get fans engaged in the universe the developers have created. League of Legends seems to be taking a similar approach with the likes of Arcane, and this could add another element to Omega Strikers that brings players back week after week. 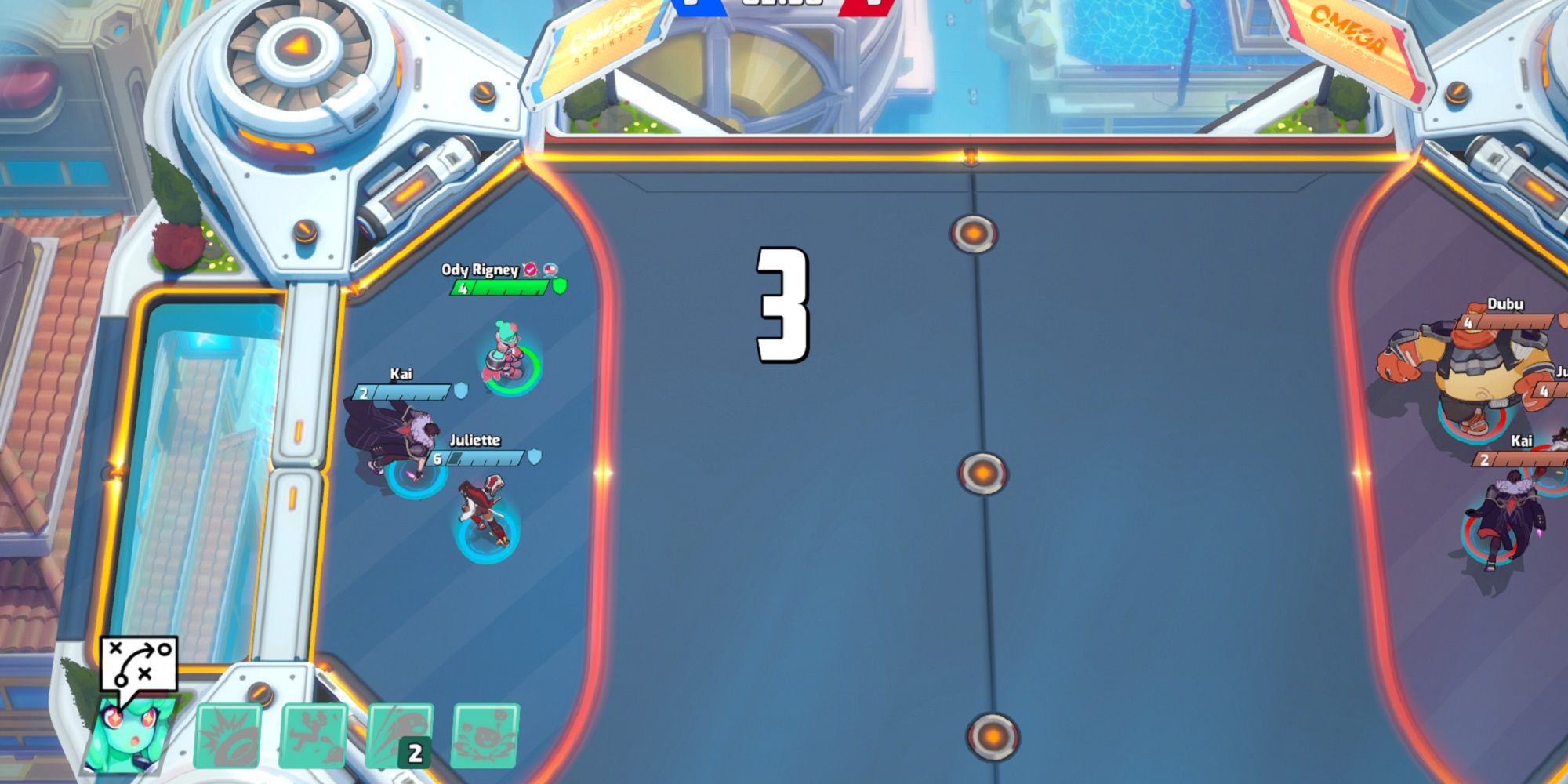 As I mentioned earlier, however, Omega Strikers’ biggest test won’t be its gameplay or ranked system, it’ll be its longevity. Live-service games are a risky business, and it seems many developers set their sights on becoming the next Among Us or Fall Guys without any real Plan B if their game doesn’t immediately take off. However, Omega Strikers’ devs have worked at the likes of Riot and Respawn, and know how this sort of thing works.

They’re going heavy on marketing towards streamers and cultivating communities from there. It’s a sensible strategy, and the benefits for those streaming and playing seem fair – more generous than most other games. From day one of the beta, Omega Strikers will implement creator codes, so players can join in the name of their favourite streamer. Beta codes will also be available via Twitch Drops – harvested by watching streamers play the game. But the streamer whose community wins the most matches in the Creator Versus mode, which will drop soon after launch, will get their own skin put into the game in addition to a more tantalising prize: one percent of all net revenue from Omega Strikers Season One. That’s certainly an incentive.

Developer Odyssey Interactive is also supporting the game with plenty of new content right off the bat. Season One doesn’t appear to be any kind of testing period – apparently 15,000 people have already quietly tested the game – instead offering new stuff “basically every two weeks.” Live-service games, and especially independent live-service games trying to break into the market, are already distancing themselves from Halo Infinite’s disastrous seasonal offerings. 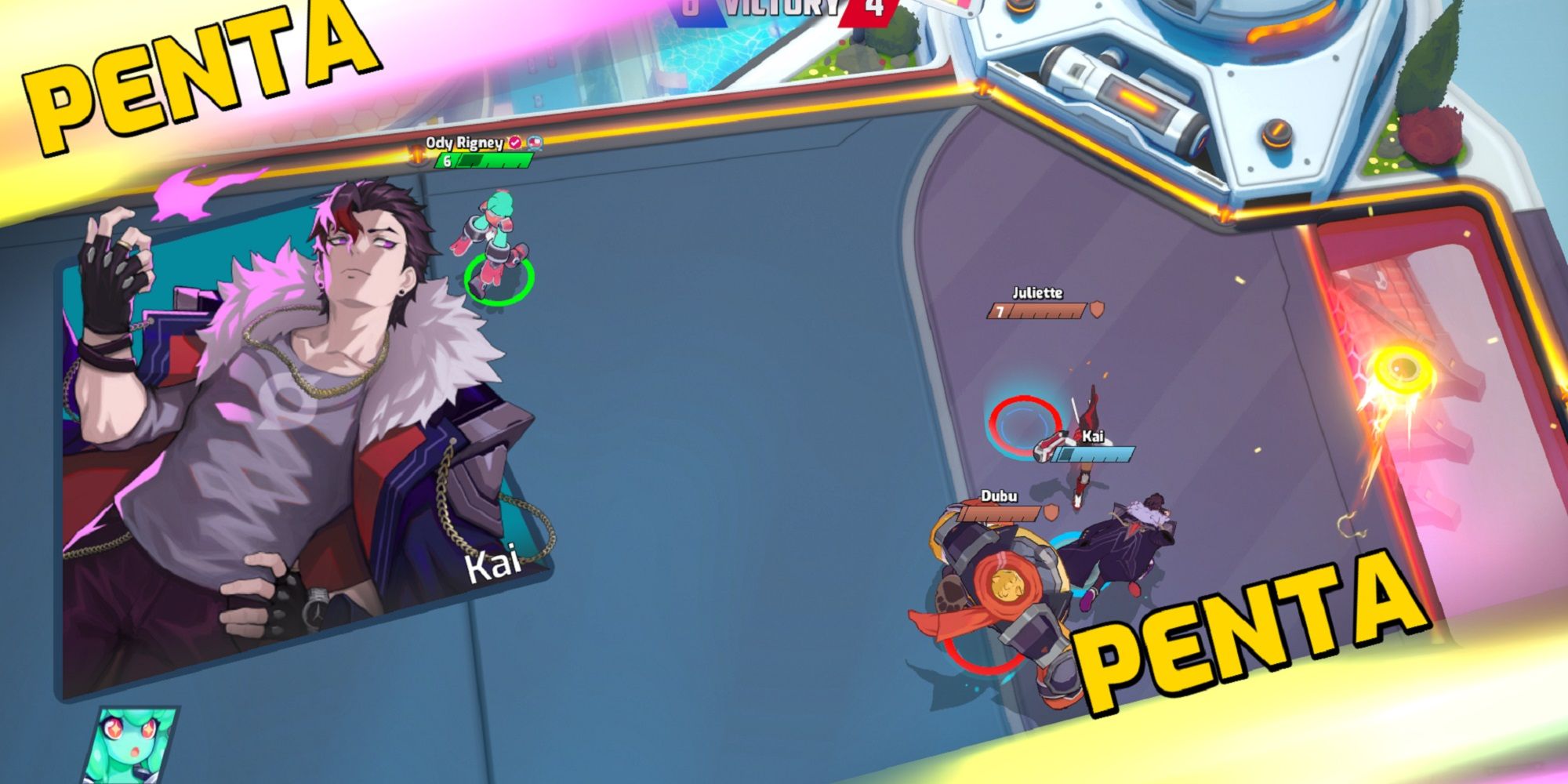 The devs say that the new content will include new maps, modes, and playable strikers quickly after the closed beta launches today. I already noticed character silhouettes with forthcoming release dates in the game, so everything seems carefully planned and ready to go. Season Two will follow in December, when I’m sure we can expect just as much stuff.

Omega Strikers is a bunch of fun, even if I haven’t really got stuck into it for a long period yet. Ranked was also off-limits due to an uncompletable mission that required me to buy a character from the shop, despite having the full roster unlocked for the press event. Odyssey Interactive has clearly put a lot of thought into planning constant updates and bringing creators on board, and I hope that brings players back regularly. The game doesn’t have the mechanical depth of League, nor does it have the simplicity of Rocket League, but its short, hectic matches nail that ‘just one more’ feeling that we all look for in live service games. Who knows whether Omega Strikers will stand the test of time, but it deserves a chance, at the very least.