Welcome to One Piece Odyssey, a place where your friends are the most important thing in the world, and they'll follow you into battle. And the battles are constant. Practically every area you explore will see you going toe-to-toe with a variety of enemies. The world of One Piece is so varied given its long history, so expect to see some familiar enemies, along with the ever-frustrating Marines.

There is a lot to learn when it comes to fighting. Everything comes down to positioning, power triangles, and the best use of items. Of course, learning which abilities pack a punch will come naturally. Once you've nailed all of these tips, you'll be the best there ever was… oops, wrong anime. 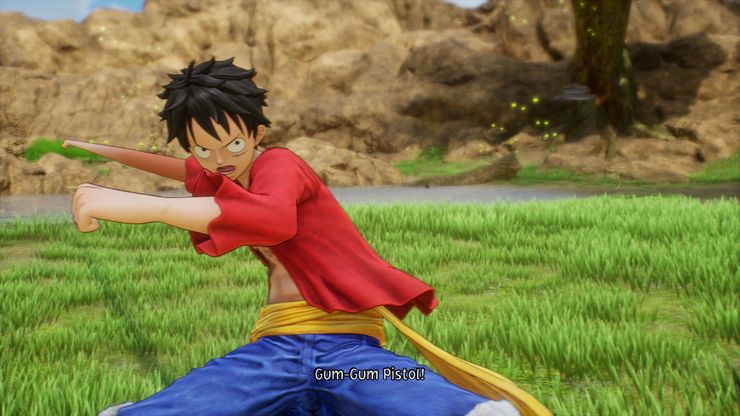 You're going to want to speed up your fights after some time. The attacks you deal out are swift, however, the abilities you'll use always come with an animation of varying length. There are so many battles to fight through that eventually watching all of those very cool, but time-consuming animations will drag. If you want to get in and out of the fights quickly, keep the battle speed-up option selected.

Thankfully this is just a quick button tap, so you can enjoy any newly unlocked abilities in all their glory, before switching back to the faster option. Once you've seen Nami slam everyone in the area with lightning once, you've seen it enough. 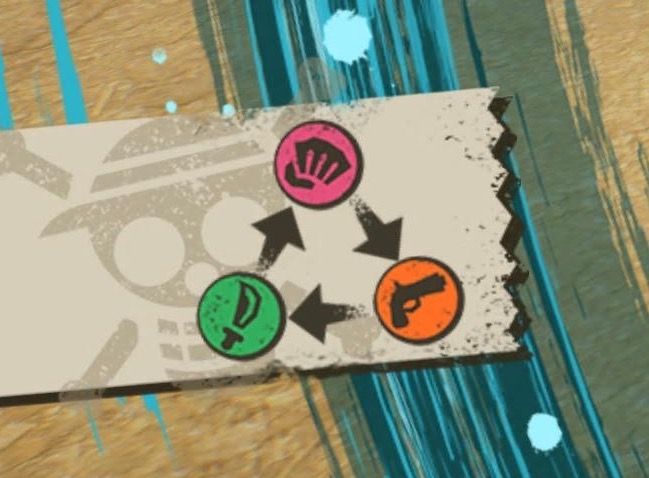 Always pay attention to the power triangle. This is a kind of Rock, Paper, Scissors mechanic. For One Piece Odyssey, it's Power, Technique, Speed. As you can see from our image, Power beats Speed, Speed beats Technique and Technique beats Power. As long as you keep this in mind, your fights will be straight forward.

Thankfully the devs have been kind enough to give you another way to see this triangle in action. If you look at the enemy's name, above their heads, you'll see either down arrows or up arrows. These give you an indication of whether your selected character has an advantage in the fight or not. 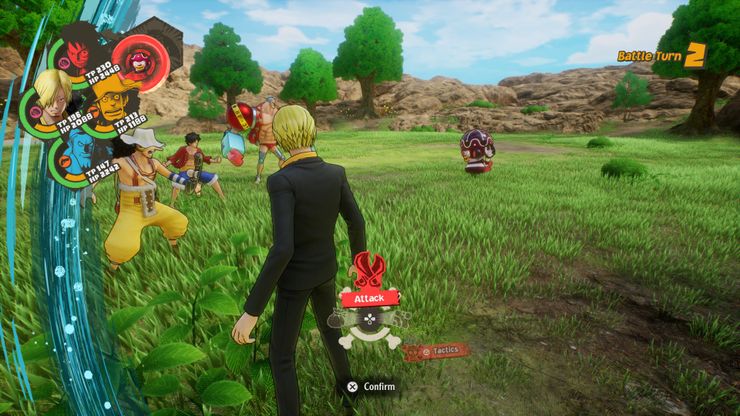 You'll notice right away that the fights in One Piece Odyssey take place over a few close areas. For example, you could have Luffy fighting two enemies in one zone, Usopp battling three enemies, while Nami and Zoro are in another with one enemy. You can switch zones with certain special moves, or knock enemies into other zones with powerful abilities. This is integral to winning a fight without losing too much health.

If you need a technique character in another zone, switch them over to speed up the enemy's defeat. Perhaps you have an ability that hits all foes grouped in one area? You can switch over to that zone and bash them all at once. As soon as you unlock Bond Arts, there's an option to move a character with a simple attack that hits pretty hard. 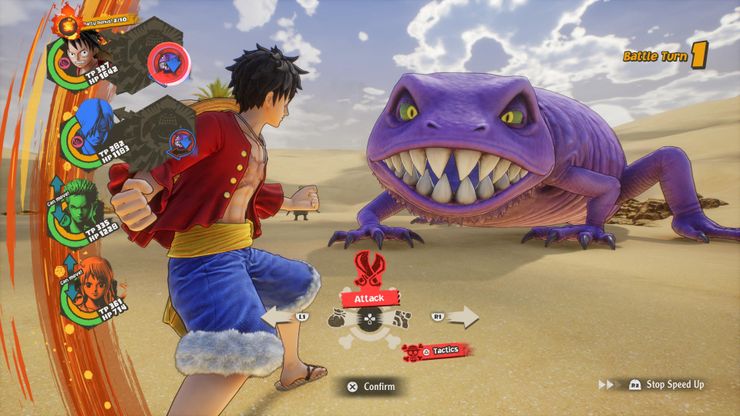 When browsing through the abilities of each character on your team, you'll notice the icons above the ability description shows a diagram. This notes whether the ability is a close ability, to hit enemies in your area; or a long ability, which attacks those at distance. Using the correct distance will strike for more damage. For example, Luffy's Gum Gum Bullet is a close move, so this will be more effective in close combat.

You should also keep in mind that if you use a close ability on an enemy further away, it will move that character to the enemy zone. Getting this wrong could end up moving a member of your team to a useless position for the fight, and you'll end up wasting an attack to move them elsewhere. 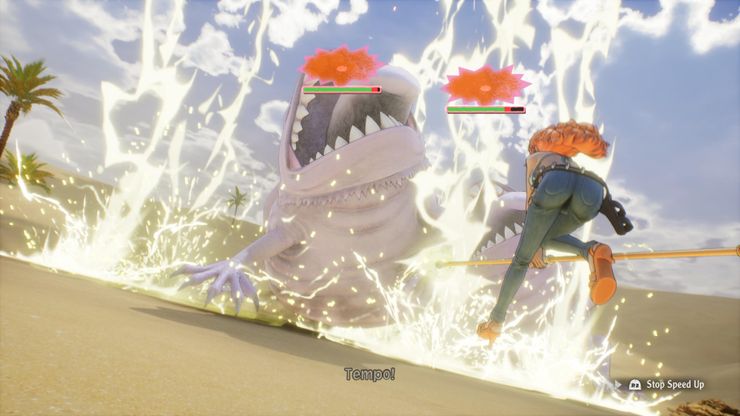 As you progress, you'll meet more enemies that have certain weaknesses to your abilities, or even some resistance to them. An easy example of this is Robin's 'Dos Fleurs Grab' which conjures hands to grab a man's "sensitive area". This move, of course, only works on men, Much like Nami's 'Happiness Punch' which seduces men.

You'll come across odd enemies where a resist icon is shown and these will easily defend particular abilities. As with so much of the game, these statuses are clearly signposted, so you just need to look out for the pink weak icon or the blue resist icon, in order to get more use out of your battle abilities. 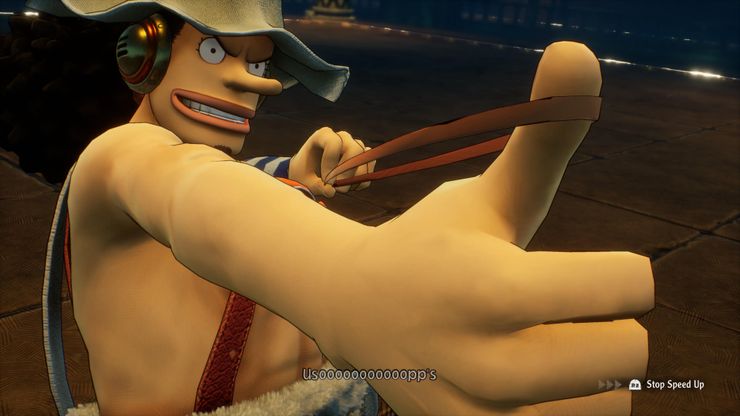 One of the best features of One Piece Odyssey's combat is the ability to freely move your characters in and out of your team during a fight. This takes up no resources or even turns in the combat order. Simply open the battle menu and select 'Switch Battle Crew'. From here, select the member you want to switch out, then the member you want to switch in. In an odd design choice, you need to tap the select button once more to complete the switch.

You will find this option important for utilising the power triangle. If you enter a fight and your team isn't getting bonus damage from the characters already in the party, you can switch them out fast. You can make several switches in one go with no penalty. This gets your powerful crew members to the front of the fight. 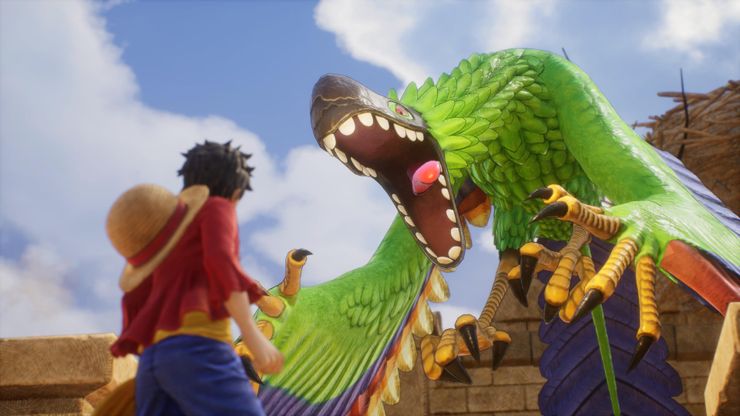 Replenishing TP, the resource needed for performing special abilities is perhaps the hardest resource to manage. You'll end up using abilities much of the time as they are more powerful than your standard attacks. Each ability uses a different amount of TP and running low will see you struggle. The fastest way to replenish TP is to use that standard attack.

While there are items and meals you can consume to top it up, they aren't as effective as health items. Replenishing 100TP from a meal is nothing if an ability costs 80TP to use. At least with attacking you aren't just being rewarded TP for the attack, but you're also damaging the enemy at the same time, even if it's for minimal damage. 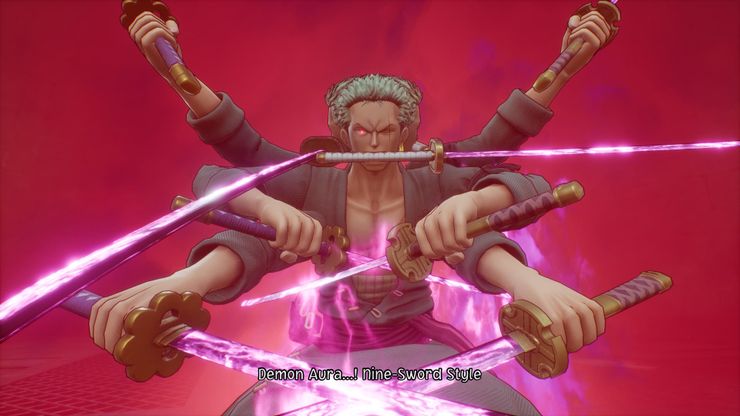 Where items and meals come in really handy are the buffs earned for consuming them in battle. The meals that Sanji can prepare are great for managing many options at once. For example, the 'Bronze Bat Soup' heals all allies by 1000HP in and out of battle. However, if you use it during a fight, it will also increase all allies' DEF and GUTS stats by 10% for 3 turns. As you play you'll unlock more recipes with powerful buffs like health regeneration and protection against certain elements.

It's not just food that can aid you during fights. Usopp can craft ammo balls to be thrown at enemies, hitting them with a debuff. These are crafted in campsites and can have an impact on the enemy's DEF, send them to sleep or even paralyze them. 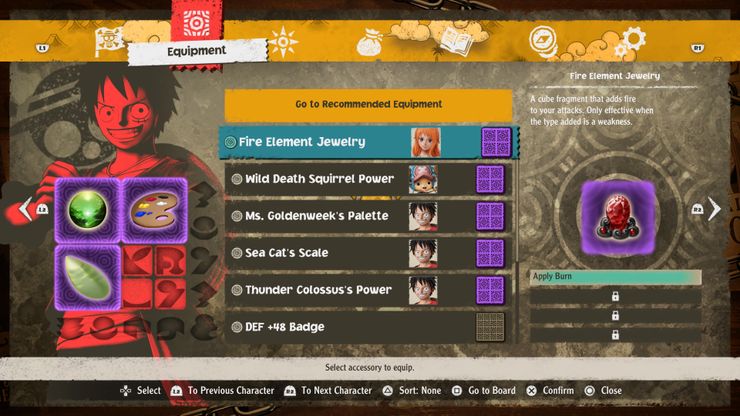 Make sure you check your accessories often, as you'll find a lot of these in crates or as rewards. Equipment comes with a variety of buffs to your stats. Some might apply a burn or freezing effect to the enemy, while others will increase your base HP stat or your attack power.

Each character can equip several pieces of equipment, as long as they have space to equip them. Cycling through these can be of great benefit to weaker characters or those with low HP stats. Later in the game, Robin is able to combine accessories to make them even more powerful. 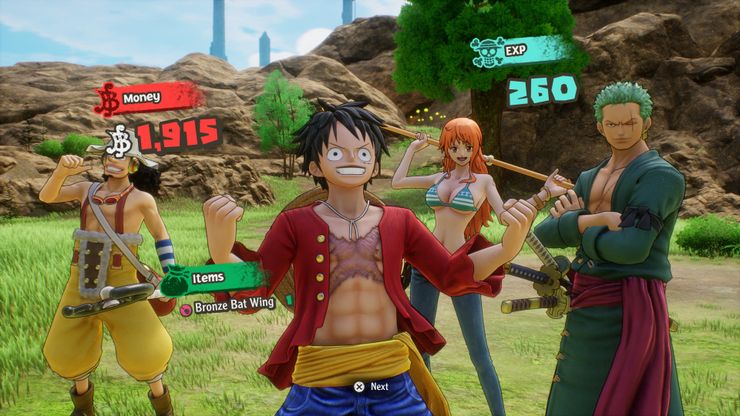 Another great feature of the battles is random challenges that ask you to meet a requirement for a bumper crop of XP or a batch of cooking and crafting ingredients. Some of these tasks can be simple – beat this enemy within one turn, or kill this enemy with Zoro. Others scale up the danger by bestowing huge buffs to the enemy, and you need to beat them before they knock you out.

Achieving these requests can really help with leveling up your crew. It seems the XP bonus amount is random, but it nearly always gives tens of thousands of XP points. This can see your battle rewards go from 6,000XP to over 30,000XP, which pushes your crew through the levels swiftly.