The Persona games are JRPGs that follow teenage protagonists tasked with changing the fates of people around Japan, and Persona 4 was very much in this vein. Both 2008’s original Persona 4 and 2012’s re-release of Persona 4 Golden follow Yu Narukami as he teams up with friends who call themselves the Investigation Team, and with the help of a cartoonish bear who sometimes has a humanoid appearance, they leap into TVs and get to work as soon as they see another person who needs saving on the Midnight Channel.

But what is The Midnight Channel? What are its origins, and how does it work? Why does the Investigation Team go to the local department store to start tackling their next dungeons? This is a game all about pursuing the truth and finally being able to accept it, which happens as characters are saved from the Channel. We’d like to examine what it is, how it works, and how it impacted the residents of the quaint countryside town of Inaba.

Spoiler: This article contains spoilers for several of the endings of Persona 4 and Persona 4 Golden, including end-game content, bonus content, and the identity of the true culprit.

How Does The Midnight Channel Work? 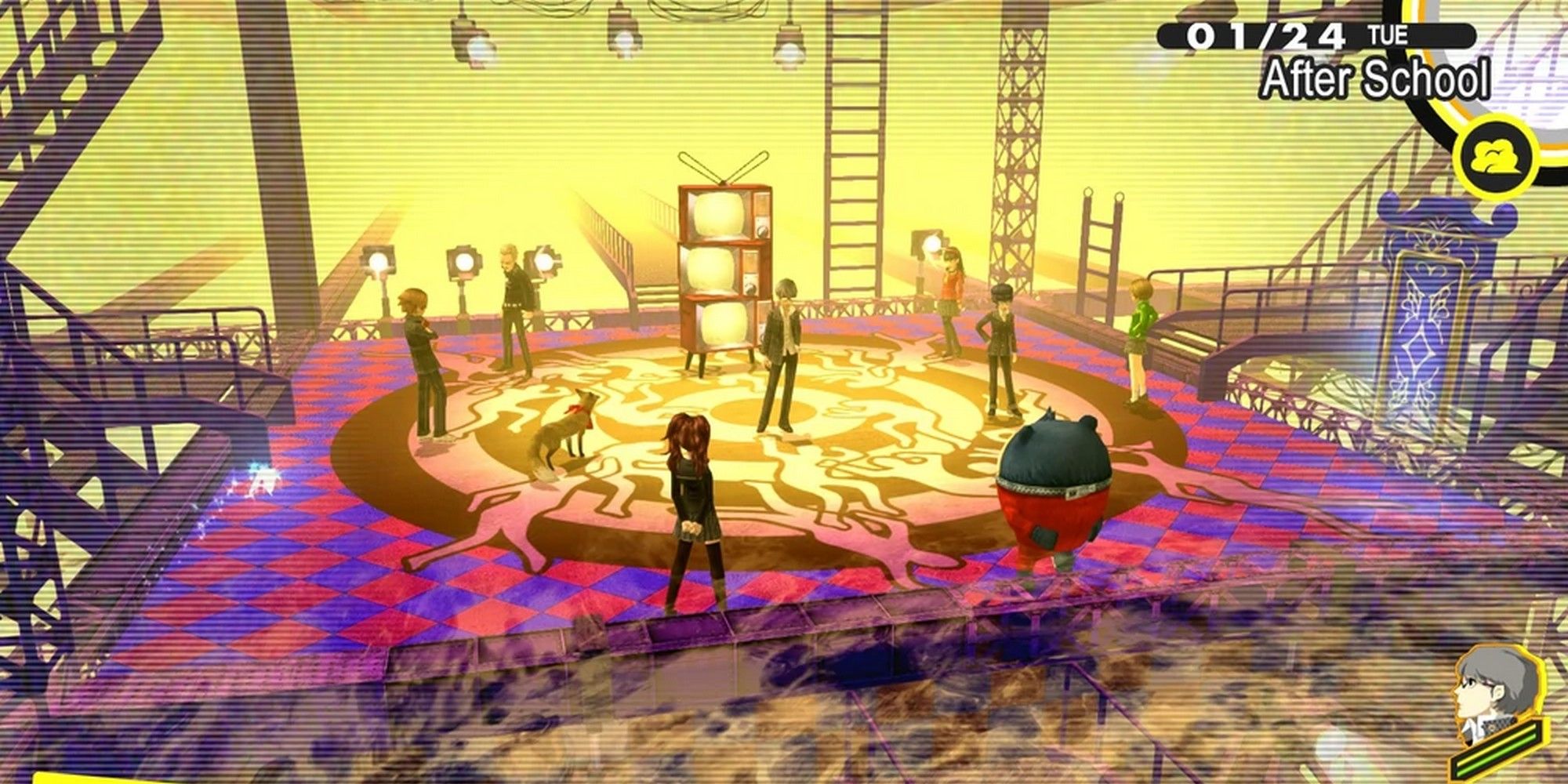 As you’re getting to know your new friends as Yu settles in for his year in Inaba, Chie tells you about of the legend of the Midnight Channel. According to hearsay, if you look at a television screen that’s turned off exactly at midnight on a rainy evening, a person will appear. Legend has it, before the gang begins to understand the Midnight Channel, that that person is your soulmate.

Chie tells you that she overheard someone saying they saw Mayumi Yamano, a television reporter who’s gone into hiding after an affair with politician Taro Namatame, delighted to have gotten a local celebrity as a soulmate. With the forecast predicting rain, the kids agree to try it out. Yu attempts to touch the blurry image of a woman that appears on his screen, and is shocked to realize that his hand has gone through the television.

After proving to his friends that he can do this, Yu, Yosuke, and Chie enter the TV and meet Teddie on what looks like a studio soundstage. The fog is too thick to see through in the Channel, so Teddie crafts special goggles for the Team that allows them to see through it. He tells them that when a person is placed inside the TV, they’re safe enough until the fog inside the Midnight Channel clears.

When this happens, the previously docile Shadows are filled with rage and set off on a mission to kill any human that’s still inside. When this happens, the deceased victim is spat back out into the real world again with no visible markings or wounds. The Midnight Channel is too harsh for young people, though, or those too innocent to have a Persona of their own, who will fall ill from its effects regardless of whether they’re saved from the fog in time.

Victims, however, can be saved. The Team learns that people show up in the Midnight Channel not long after appearing on regular television broadcasts themselves. When their image on TV is crystal-clear, it means they’re actually inside and need to be saved. Yu and friends are then given a deadline to enter the Midnight Channel, locate the victim inside, and defeat a dungeon to reach them. After the Investigation Team wins a fight with the victim’s Shadow Self, the person is then able to leave the Channel with the gang, unharmed except for the trauma of what’s happened.

How Do The Culprits Use It? 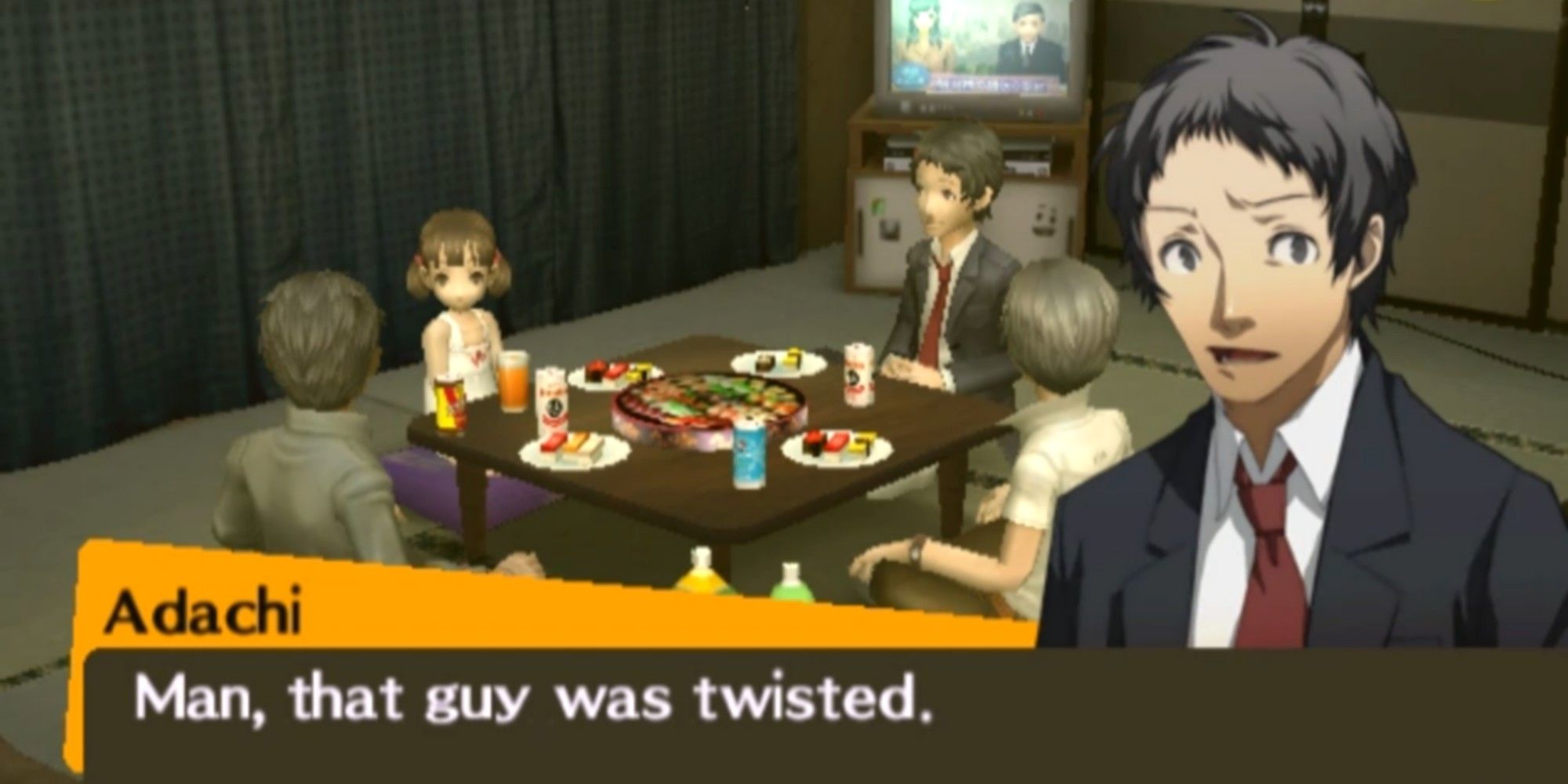 Tohru Adachi learns about the Midnight Channel and views it as a way to alleviate the boredom of living in a town as small as Inaba. He’s assigned to keep guard over Mayumi Yamano, the disgraced reporter who had an affair. He asks her if the rumors of the affair that sent her into hiding are true, and he shoves her when she brushes off the question. He ends up pushing her into the television and forces her through into the Midnight Channel.

When Saki Konishi, the girl who found Yamano’s body, is brought in for questioning, Adachi is the officer assigned to interrogate her. He made some unwelcome advances on her, for which she slaps him, and in a fit of rage, he pushes her into the Midnight Channel, too.

As this is going on and the investigation is beginning, Yamano’s lover, Taro Namatame, is watching the Midnight Channel and reaches out to touch her image when she appears. Because of the nature of the Channel, his hand goes through the screen. After Yamano is found dead, Namatame falls into the belief that she had given him the ability to go through the television to save the people he sees there.

Namatame calls the police to tell them what he knows, but Adachi is the one who takes the call. He suggests, in apparent jest, that Namatame, if he knows the victims ahead of time, should keep them safe somehow. Namatame takes Adachi’s advice, unwittingly becoming the mastermind’s accomplice in his crime spree. Misunderstanding entirely how the Midnight Channel works, Namatame begins abducting the people who’ve appeared on it after their recent television feature and cramming them into the world inside the television, where he mistakenly believes they’ll be safe.

Adachi, however, has seen the truth of the Channel and knows what will actually happen to them. He continues investigating the crimes with the police as Dojima’s partner, all the while aware that Namatame was kidnapping people and knowing full well what he was doing to them. The only other victim that Adachi puts in himself is Mitsuo Kubo, after being annoyed that the awkward teen has resorted to copycat killings in pursuit of attention.

How Does The Investigation Team Use It? 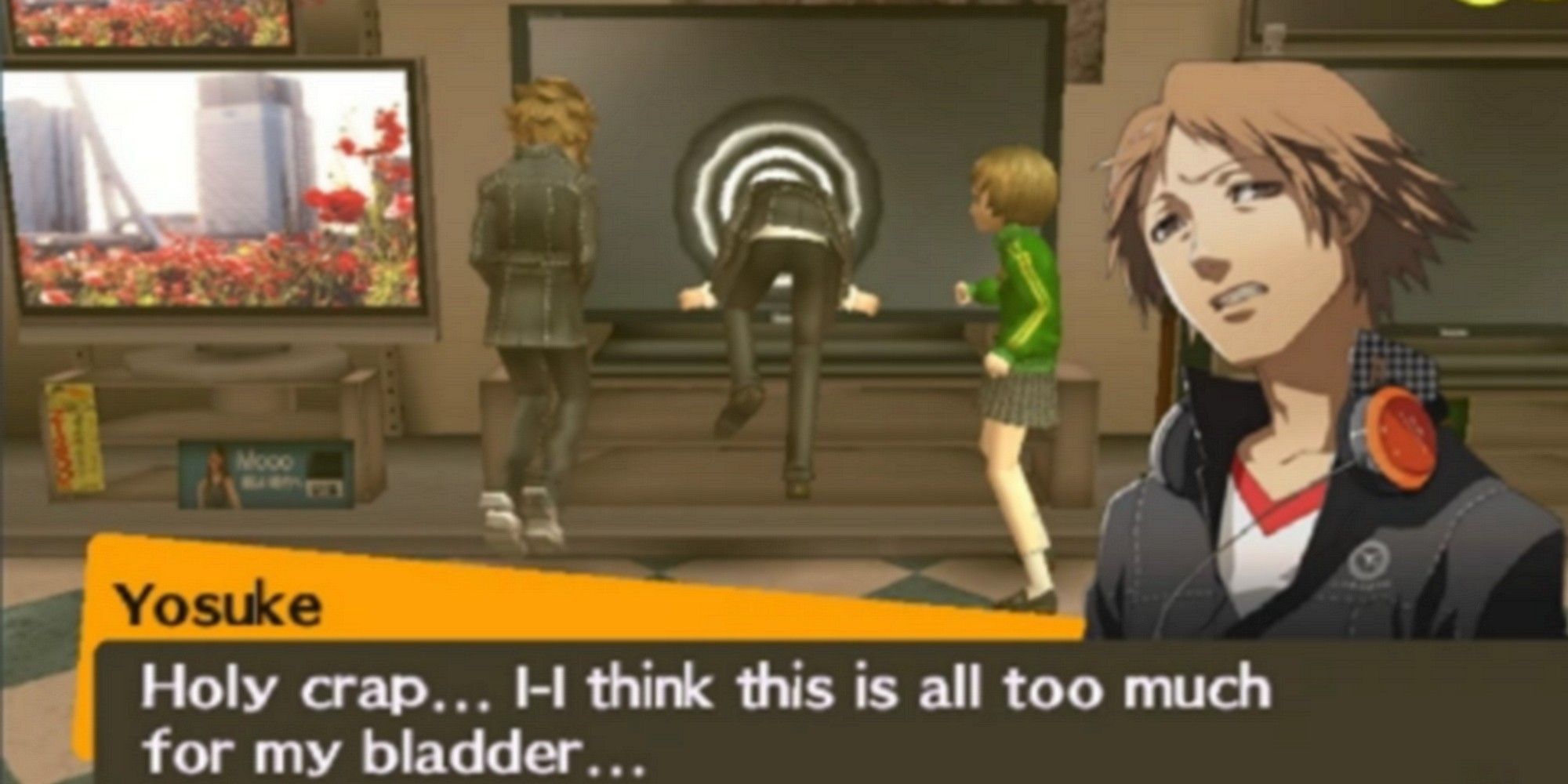 Yosuke and Chie don’t believe that Yu can put his hand into the TV until he shows them later that day with a large television in the electronics department at Junes. This comes to be their typical entry and exit point for the Midnight Channel, as the TV is actually big enough to fit through, unlike the one in Yu’s room.

After meeting Teddie, receiving their fog goggles, and assembling the Investigation Team, their classmate and pal, Yukiko Amagi, appears on the Midnight Channel. She’d been on the news talking about her family’s inn and hot springs, from which Mayumi Yamano disappeared, and can be seen as Princess Yukiko on the television after that, uneasy about accepting her role as the inn's next head keep and loud in her mission to find a “hot stud” instead. The need to rescue their friend is what drives the Investigation Team into the Midnight Channel again.

Once they’ve figured out how to locate people within the Channel, how to use their Personas to deal with the shadows in the dungeons that those kidnapped appear within, and how to defeat the bosses, the victim is saved from the clutches of the Midnight Channel. After this, they can leave, typically with their Shadow Self having turned into the new Persona as a result of overcoming themselves. For the bulk of the game, Yu and the rest of the Investigation Team use the Midnight Channel to save the people who’ve been abducted from certain death.

There is one time, however, that they contemplate using it for revenge. Convinced that Namatame is the mastermind, they consider shoving him inside the TV in his hospital room as punishment when they go to deal with him there. You can have them do this, ushering in a Bad Ending, but the choice to spare Namatame and learn more about the actual culprit is the first step toward the real end of the game.

Where Did It Come From? 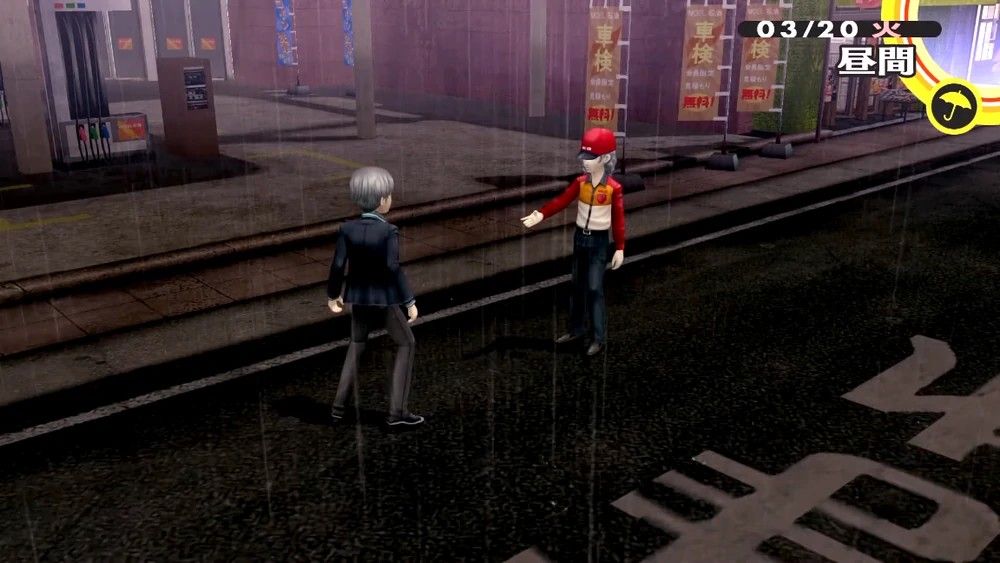 In the Japanese myth about the creation of the universe, there are two notable deities: Izanami and Izanagi. Yu’s initial Persona is Izanagi, who you’re able to bring with you through the game and level up, if you so desire, or you can instead use him to fuse even stronger Personas.

With Izanagi spoken for with Yu, that leaves Izanami, who does appear in the game but not in her true form until the very final section. On Yu’s first day in Inaba, he stops at a Moel gas station with Dojima and Nanako, where he shakes hands with the “weird” attendant as a polite introduction to the town. Unless you head back to the gas station again during the story, the attendant is easy enough to overlook, but it’s their touch that allows people to put their hands through the television.

As part of pursuing the True or Golden Endings, you head back to the gas station as your time in Inaba comes to a close, retracing your steps from your first day in town. When you speak to the attendant again, they reveal themselves to be Izanami, who was responsible for the creation of the Midnight Channel and who has stuck around as the attendant to watch how things play out.

The Channel, she tells you, is a summation of the human consciousness on a worldwide level. It’s always existed, but Izanami simply harnessed it into an accessible place, with television screens simply acting as a window to this global consciousness. She’s also the one who spread the initial rumors around town about the Midnight Channel, to entice people to check it out and get the ball rolling on the events of the game.

What Happens To It After The Game? 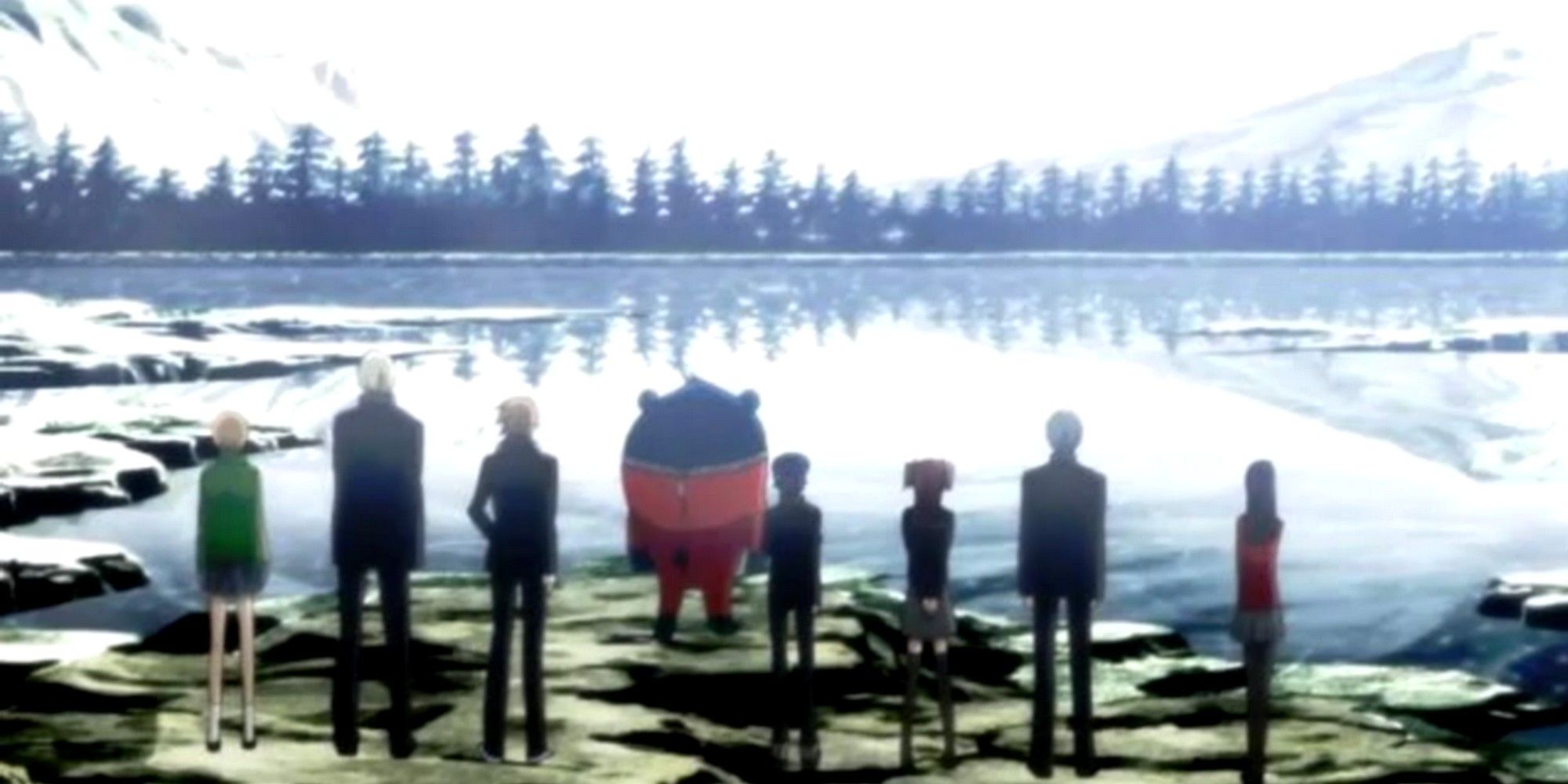 You’re only able to see the true side of the Midnight Channel if you’ve pursued any of the nicer endings, which see the case resolved fully after the completion of the Yomotsu Hirasaka dungeon. After finally reaching Izanami and learning the details of how things have played out, she sends Yu and friends into the underworld, transforming into the gruesome, death-ridden Izanami-no-Okami.

Because of the personal growth Yu has undergone and the challenges he’s faced, he’s able to find on the strength to fight her on his own even after his friends have succumbed to the power of the underworld. His original Persona, Izanagi, returns to him and evolves into Izanagi-no-Okami, whose special move, Myriad Truths, is enough to finish Izanami-no-Okami off once and for all.

After she’s been defeated, Izanami lifts the fog that she introduced into the Midnight Channel, and we see that it’s actually an idyllic, serene setting instead of the nightmare it’s been throughout the game. Even the Shadows inside were said to have been victims of the fog, attacking humans there because of “clouded delusions.” Teddie resolves to become the guardian of the Midnight Channel after Izanami has lifted the fog, ensuring that it will remain peaceful from there on out.