Planet Zoo Lets You Build Your Zoo However You Want

A good zoo isn’t just about giving paying customers a fun afternoon with the family. Looking past the fancy animal displays, shiny souvenirs, and themed restaurants, every great zoo works toward a mission of conservation. To accomplish this goal, the zoo and its employees must get everything perfect, right down to the very last details. Frontier knows this, and the result looks to be the most detailed, customizable experience the genre has ever seen.

As I sit down to meet with Frontier, the developer opens up a zoo they’ve created and soars over a river of people walking along the paths. Sure, each person has expectations and desires when visiting a zoo, but this facility isn’t just about catering to the visitors. According to Frontier, Planet Zoo is just as much about conservation and education as it is about building the perfect zoo for your customers. Every animal has wants and needs based on its species, and its up to you to design habitats for these beautiful creatures in ways that also attract patrons. 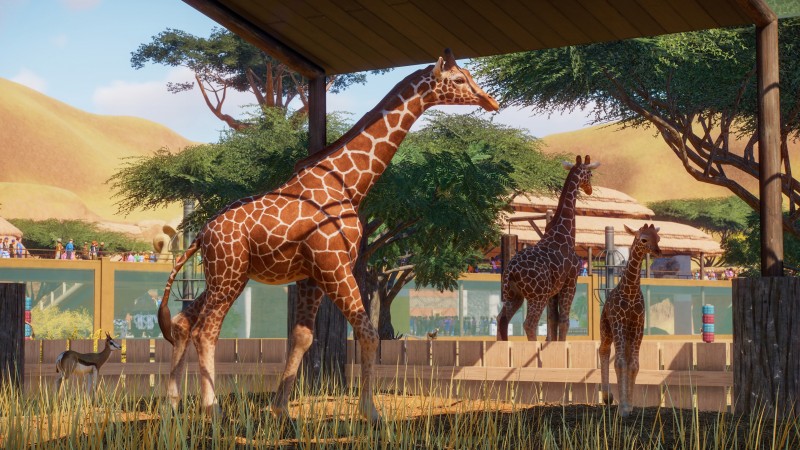 Planet Zoo understands how daunting the task at hand is, but it has provided players with an impressive customization suite to help them achieve it. The first step is assembling the walls however you want them. From there, you need to take into consideration the kind of animal that will live inside the habitat, then make sure the correct terrain is laid; alligators have different needs than giraffes.

If you need help, you can open up a tab to see what that animal needs; making sure your alligator has enough space to swim, as well as a nice plot of dry land to lay out in the sun is important. This menu shows the needs of animals across four welfare categories: nutrition, social, enrichment, and habitat. You can also assign research tasks to your staff to learn more about the animals – improving your zoo’s knowledge of the animals even unlocks additional text on educational signs you can post around the park. 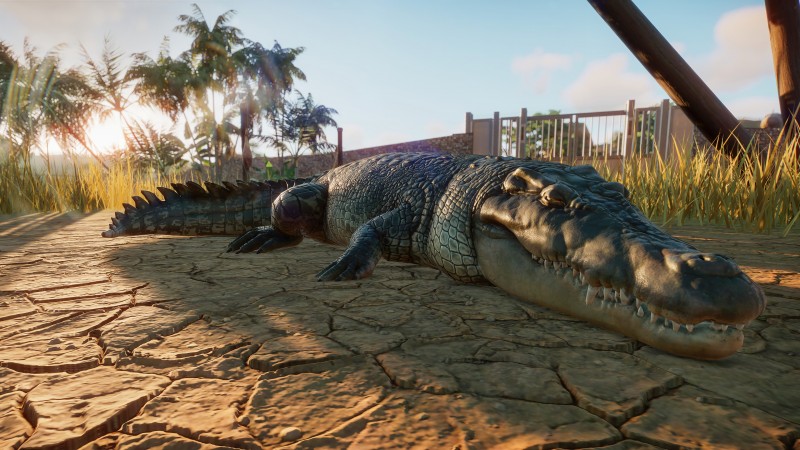 Once the animals are placed, they’re nothing short of impressive. You can zoom in close enough to see individual hairs on lions, and those alligators basking in the sunlight have intricately designed scales. At one point in my demo, the developer zooms in on a chimpanzees eyes to show how captivating they are in Planet Zoo. Species like giraffes and zebras have unique patterns that are passed down based on the genetics of their parents; no two animals are ever the same.

The creatures in Planet Zoo behave dynamically, meaning you can expect unpredictable moments in line with how the species actually behave in real life. For example, in the chimpanzee habitat I’m shown, an unexpected rainstorm sent many of the apes scurrying for cover under a shelter in their habitat, while some stayed out in the rain to enjoy sloshing around. Also, in the first five minutes of my demo, nearly every habitat featured an animal that decided it was a good time to clear their bowels. 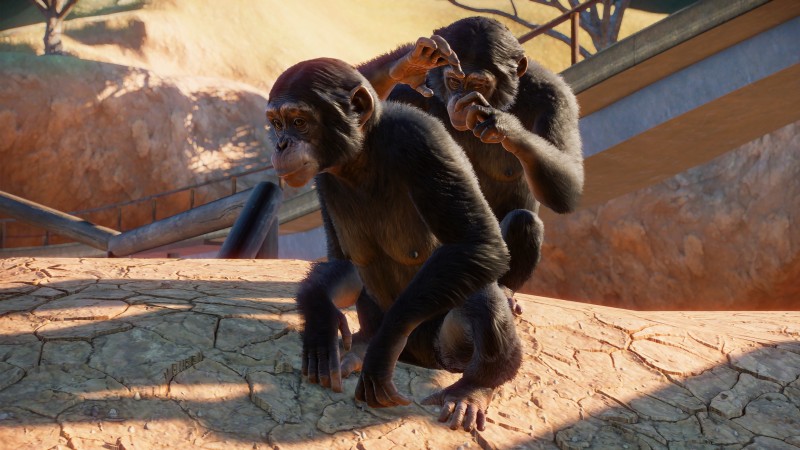 In line with that dynamic behavior, the animals in Planet Zoo breed, and you witness entire lives of animals from birth to death. Each time an animal is born, the zoo celebrates, and each time a creature dies, the zoo mourns its loss. Animals even have fertility traits that measure how capable they are to breed, and keeping animals from inbreeding is important to prevent sterility. Alphas emerge in herding species, and animals can develop herding behaviors that cause them to follow those dominant animals around.

In addition to catering to animals’ individual needs, you can also match up certain species that co-exist in the wild. In the demo I watch, I see giraffes and springboks living in the same habitat, as well as zebras and black wildebeests. These kinds of pairings enrich the animals lives if done right. You do have to be mindful of these pairings, however. Matching a chimpanzee with a crocodile won’t end well for the ape. 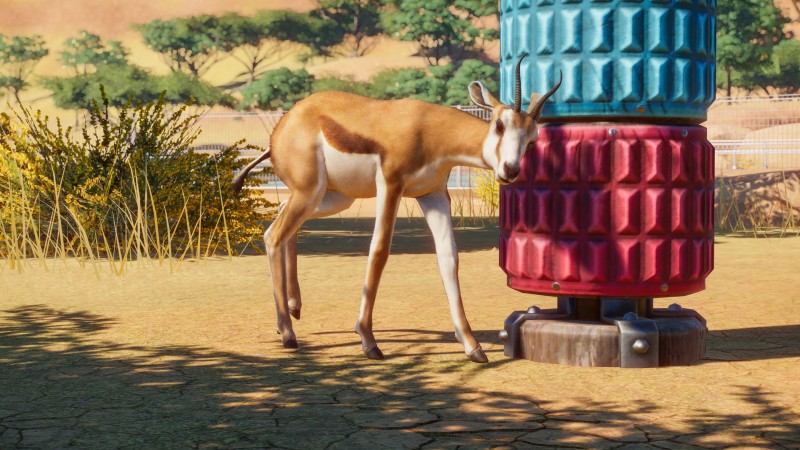 Other ways to improve animals’ lives is to install enrichment items in the habitats. For big cats like lions, tigers, and cheetahs, this includes giant scratching posts, while you can add a device that makes chimps solve puzzles to get their food. If something isn’t quite right in a habitat, you can easily fix it by placing a new item or painting the ground with grass, sand, or soil to match their needs.

One big way to cater to the chimps’ needs is to build climbing frames for them to spend their energy. Just like the walls and paths in Planet Zoo, these frames are custom built to your specifications. Not only are the frames set up however you want, but the chimpanzees run across them seamlessly regardless of how you set them up. 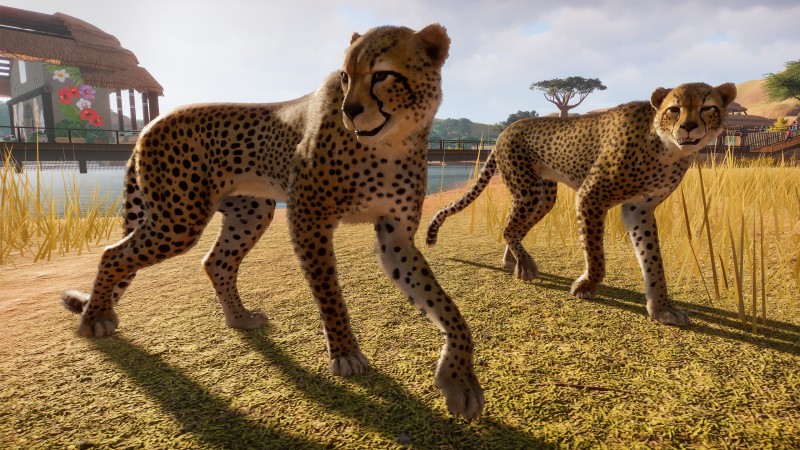 Of course, a zoo doesn’t run itself. You need to hire employees to run the park. During my demo, I was only shown the zookeeper employee type, but it was neat to watch them go about their business. Zookeepers clean habitats and feed animals, but base their operations out of keeper huts, a special building type you can create. Keeper huts must be placed near the habitats to allow keepers to be efficient, but they should be hidden from guests’ views, as most guests don’t want to see behind the scenes. To do this, you can designate employee-only paths.

As the keepers get to work, watching the animals react to them is awesome. In my demo, the zookeeper entered the dog habitat with a bucket of food. The instant the door creaked, announcing his presence, the dogs’ ears perked up and they got excited for feeding time. Small touches like that defined just why I was so impressed by Planet Zoo. 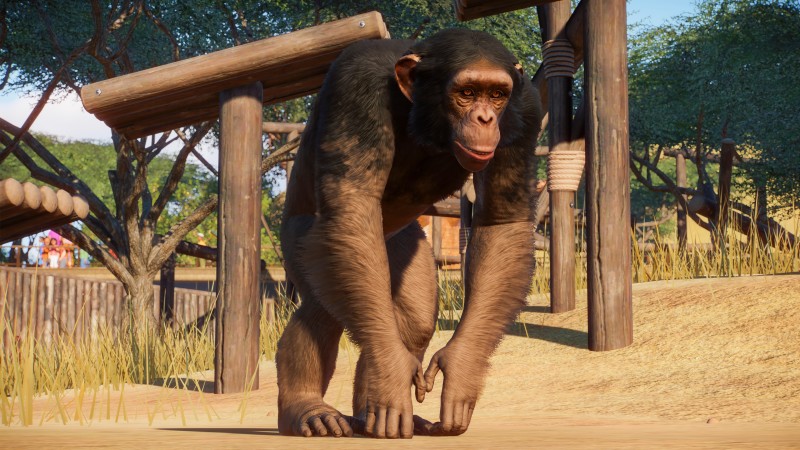 While not everything is focused on the customer, they are your source of income. To make sure you’re treating your patrons right, you can add restaurants, souvenir shops, bathrooms, and more in order to react to their needs. It’s also important to make sure they have good views and plenty of educational signs around the exhibits. If you want to give them even better access, you can set up a 4×4 track so they can go on a mini safari through the animals’ habitats; whether you choose to charge for the ride is up to you.

The zoo-sim genre has been largely dormant for several years, but Planet Zoo looks to revitalize it. With stunning attention to detail, dynamic ways to react to your animals’ wants and needs, and all the simulation mechanics you’ve come to expect from games like these, I can’t wait to play Planet Zoo when it launches on November 5.