PlayStation 4 is now at 108.9 million consoles sold through the quarter ending December 31. Sony revealed that new number as part of its third-quarter earnings report. This builds on the 106 million PS4s sold that Sony reported in early January when it revealed the logo of the PlayStation 5.

For Q3, Sony sold 6.1 million PS4s. That was down from 8.1 million consoles sold in the same period from the previous year. This marks the third quarter in a row that PS4 hardware sales dropped year-over-year. The system peaked during holiday 2016 with 9.7 million PS4 systems sold during that quarter. And Sony acknowledges that the console is on the way out as PS5 approaches.

“PS4 hardware is in its seventh year since launch,” reads Sony’s financial statement. “And, partly because we announced the PlayStation5 next-generation console, unit sales decreased year-on-year.”

PS5 is launching worldwide this holiday. 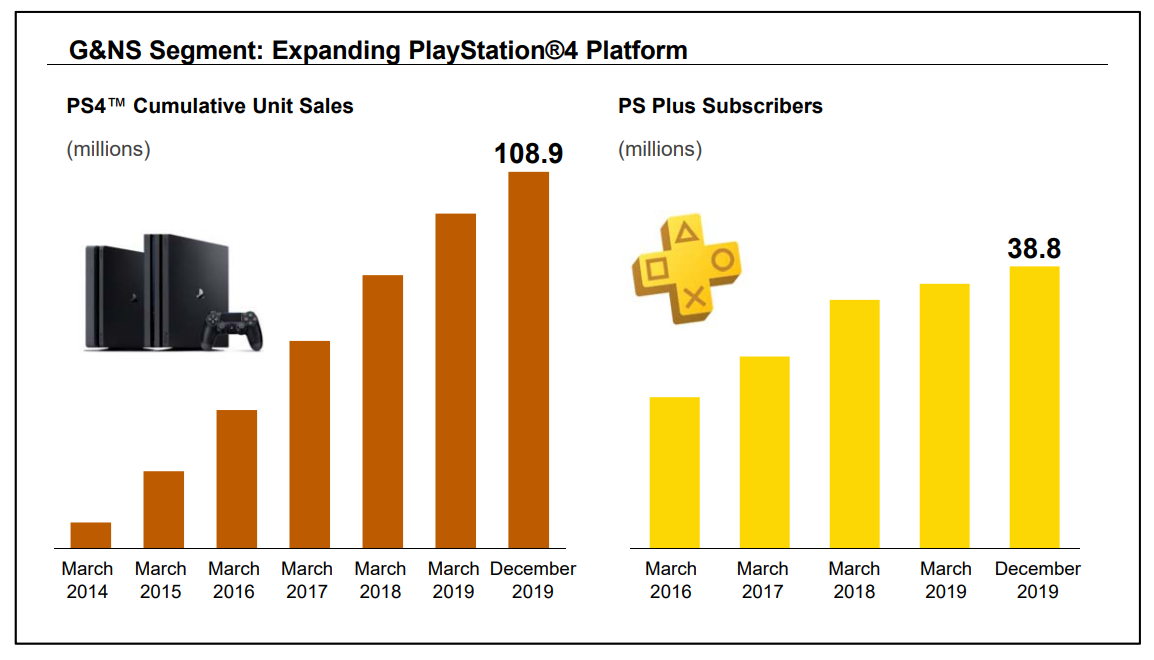 Above: PS4 and PS Plus continue to grow for Sony.

PlayStation 4 is on the way out, but it’s still making Sony plenty of money

But despite the expected decrease in PS4 sales, Sony is happy with the performance of the console. The company notes its overall games business is growing. It also points out that it didn’t significantly lower the suggested retail price for the PS4 over the holiday. That helped Sony keep making money off of its hardware.

“We were able to secure a margin on hardware sales that was flat year-on-year because we kept the promotional price at the same level as during the last year-end selling season,,” reads Sony’s statement. “And because promotional costs were offset by a year-on-year reduction in component costs.

But the PS4’s days are numbered.

PS5 is going to swoop in and pick up its predecessors momentum like a baton. This means that the PlayStation 4 is likely not going to end up selling 150 million systems like PlayStation 2 did. But that’s just fine with Sony. It’s more than ready to help you move on to the PS5 as long as that keeps you in its ecosystem.