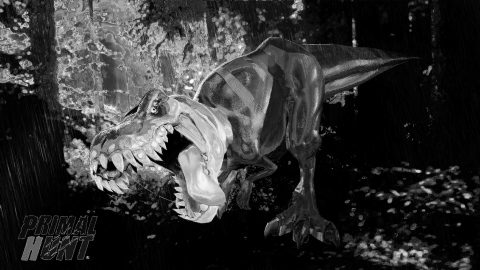 Primal Hunt is an intense retro-futuristic action game from Phaser Lock Interactive. While it’s unnecessarily gory, there’s a thrilling hunt that keeps you on your toes. Available this week on Meta Quest 2 and Pico, here’s our full review.

Primal Hunt doesn’t concern itself with some grand narrative. You’re in a biochamber, controlling a cybersuit from afar to compete in the “highest-tier” hunting experience, and away you go. Split across 10 different maps with a Desert and Jungle biome, you’re killing one of nature’s most fearsome creatures, dinosaurs. From the timid Gallimimus to the mighty Tyrannosaurus Rex, this gets deadlier as you progress. There’s only solo hunting for now, but co-op’s promised in a future update.

Alongside a trophy room to showcase successful kills, there’s a shooting range to test out weaponry and customizable loadouts for your hunter. Between different armors, crossbows and arrows, there’s a good range of unlockable options, and as someone who enjoys archery, explosive arrows were a particular favorite. Every hunter also holds grapple arrows, which act like a hookshot for reaching new locations. That lends itself to light platforming and strategy, placing yourself out of harm’s way.

Once you’re prepared, head into the teleporter to begin, but don’t assume you can rush in blindly. Primal Hunt excels in its stealth gameplay and uses the HUD to detail how visible and loud you are at any moment. If you sprint out in the open towards a target, they’ll either flee or attack, so keeping this in check is crucial. On the other hand, crouching reduces your noise and hiding in tall grass keeps you successfully hidden.

You won’t get anywhere if you ignore your surroundings, and Primal Hunt emphasizes its environments. Your gauntlet holds a conveniently accessible map, pointing out zones that contain clues to a target’s location. Scanning them requires entering Artemis Mode (effectively a detective mode), activated by pressing the trigger on your controller when it’s near your headset.

Once you’ve spotted a clue, get close and scan it, repeat several times, and you’ll find your target. Using Artemis feels intuitive, and while this repeated process can feel formulaic, you don’t need to follow these steps every time. If you know a target’s location from previous attempts, you can head straight there. Blindly searching is also possible, but these maps aren’t small.

Unsurprisingly, the battles are Primal Hunt’s most thrilling aspect, largely thanks to a solid control scheme. With a quick Y button press, readying your bow couldn’t be simpler. Firing arrows feels satisfying and landing kills gets the adrenaline pumping, especially in a close-quarter fight. It’s simple but effective archery. While grapple arrows are unlimited, they do significantly less damage, so steady your hand and make these shots count. Ammo and health crates are scattered across levels, but they aren’t as common as you might hope.

With that in mind, there’s one tip I cannot stress enough: make sure you’re ready before starting a fight. These prehistoric creatures can deal some ferocious attacks. I often found myself scrambling in defense, pulling up my shield and bashing them away. Shields decrease upon taking damage, so you can’t solely rely on them, but they do regenerate over time though). Fights in Primal Hunt bring a sense of panic that you’d never find in a flatscreen game, playing well into VR’s immersive strengths.

Despite the engaging combat, Primal Hunt takes a knock when it comes to visuals. While they aren’t so bad up close, the draw distance feels particularly rough. Even if Artemis picks up on nearby creatures, you can’t always see them – in a hunting game, being unable to fully survey your environment is a clear problem. There’s several ways to mitigate this – your map indicates areas to investigate and tells you where certain dinosaurs are located – but that doesn’t resolve the wider problem.

I wasn’t fond of the gratuitous violence either. If you die, a short scene plays out where these dinosaurs tear you apart through pretty brutal deaths and your hunter is effectively turned into paste. I’m hardly squeamish and the graphics aren’t overly realistic – some may even find these over-the-top scenes comical – but watching yourself get gored, shredded and eaten alive in third-person (with excessive blood splatter) feels unnecessary. Killing the primary target also requires extracting a dinosaur’s organ through a ‘Field Dressing’, during which the Touch controller will vibrate like an organ pulsing. It’s grim, but both the gore and extraction can be turned off in the settings, minimizing my concerns.

Primal Hunt only has artificial locomotion, with no teleport movement option. However, movement vignettes options are available, alongside snap turning and smooth camera options with adjustable angles and speeds. You can also adjust movement direction to follow either your head or hand. Both your bow angle and bowstring draw distance can be altered as well, which I found useful – the default bowstring draw felt a little too long. Your dominant hand and arrow side are also swappable, and seated play is supported.

Once the target’s taken down, find a teleporter and head back to base, and your performance will earn up to three stars. Securing a higher rating involves completing an optional goal before returning, such as killing another dinosaur, alongside sticking to mission restrictions like not killing a particular species. Either way, your first time completing a mission places a new stuffed dinosaur head in your trophy room. The next mission then unlocks in a linear campaign, gradually introducing tougher opponents until you become the ultimate hunter. Or you can freely replay previous missions, the choice is yours.

Every kill also earns ‘Essence,’ which essentially converts into experience. Leveling up grants skill points that can be invested into three different trees: Movement, Attack and Armor/Health. Between improved stamina, an increased inventory limit, more powerful arrows, improved health and more, you’ve got plenty of choice and each skill can be upgraded multiple times. Some upgrades remain locked until you invest a set number of points in that branch, so it pays to balance these out.

Primal Hunt might beat you to a bloody pulp, but Phaser Lock’s created an entertaining action game that feels right at home in VR. While the visual issues are a likely consequence of sticking to standalone hardware, this doesn’t detract from an otherwise intense hunting experience, filled with immersive stealth mechanics and great controls. If you’re searching for a new action game on Quest or Pico, this one comes recommended.

UploadVR focuses on a label system for reviews, rather than a numeric score. Our reviews fall into one of four categories: Essential, Recommended, Avoid and reviews that we leave unlabeled. You can read more about our review guidelines here.