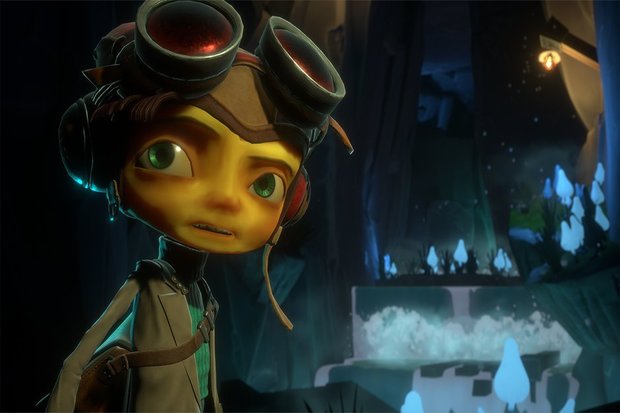 They say that you should be most critical of the media you love instead of blindly accepting more of the same – seeing as Psychonauts is by far and away from my favourite game of all time, this notion was held firmly in my cranium when I entered the Double Fine booth at E3.

I’ve been anticipating this game for almost 13 years – I first played the original Xbox title in 2006 and it knocked my socks off. The sequel was eventually enabled by a crowdfunding campaign on Fig a few years ago.

Now under the wing of Xbox Games Studios (Microsoft revealed the acquisition during their conference days prior), Double Fine was finally ready to showcase a full mission’s worth of gameplay, and given my maddening curiosity for how it would shape up, you bet I was sat in the room where it happens.

The walls adorned with sticky notes and charming hand-drawn art with plenty of allusions to teeth – I quickly realised I was in a dentist’s office, most likely relating to the first game’s antagonist, Dr Loboto. My eyes focused on one unnerving piece that depicted a set of teeth made out of bristles from a toothbrush – spooky.

The mission played out as such – Raz and the gang were interrogating Dr Loboto inside of his mind to find out the location of a senior Psychonaut. The masquerade consisted of a purposefully dull office environment – but this wasn’t introduced without a bit of cinematic flair. The camera panned across the surface of a brain before seamlessly warping into an underwater lair!

Engaging in vapid team-building exercises and employee of the month banalities, the team attempt to trap Loboto who eventually rebels, infecting the sanctity of this mind palace with his own fear.

The way Raz controls is seriously impressive – animation is incredibly fluid and the game runs silky smooth. Acrobatics doesn’t look hamfisted, which is a remarkable feat for a platformer in 2019, a genre that has been hung out to dry for so long now. Then again, the original game was no ordinary platformer! The UI has been stripped back in the sequel to focus on the environment too.

Psychonauts 2 introduces its refined powers in clever tutorials that are tethered to the narrative. You learn how to use psychokinesis by slotting a braced tooth in a vacant gum to reach a higher platform – the office building becomes overrun with eldritch dentistry imagery – you have to unzip a set of teeth to get to a new area (I’m sure there’s a phobia for that?

The combat has been reinvented too – enemies have tangible health bars now and can be stunned. Whilst we were shown psychic censors, we were also introduced to doubts and regrets, the former being frail fluttering bats weighed down by tonne weights; the latter lava beasts that make Raz’s shoes sticky.

It’s nice to see Double Fine doubling down on the mental health concepts made manifest that made Psychonauts such a special and meaningful game.

Again, it’s hard not to focus on the inspired level design – warping architecture turns rooms into Inception-esque platforming vignettes, with dental tools breaking out of walls and uvula’s acting as means to open doors.

At one point Loboto rinses and spits Raz into a basin which turns into a sliding section – you learn levitation as a last resort when you’re falling. This all works to foster the sense of a tutorial without being so on the nose about it! This was the genius wrapped up in the original game’s levels, to see it refined in the sequel is incredibly exciting.

Pyrokinesis has been changed into a targeted AOE attack – showcased in a scene where you have to burn paintings as Lilli jumps between art – out of everything I saw at E3, this single inspired level of Psychonauts 2 made my imagination run wild.

By setting levels within the most inexplicable environment – the human mind – they tread on special ground within the platforming genre, the likes of which were only seen in its predecessor.

Even as someone with such fond memories of the original, I was seriously impressed by the sequel – from a wide lens it looks like a 3D platformer that is going to work in 2019 and not flounder like Yooka Laylee with its dodgy controls and lack of consistency.

If every level arrives with the same amount of iteration and inspiration as this one, Psychonauts 2 could be a revolutionary 3D platformer when it launches in 2020.