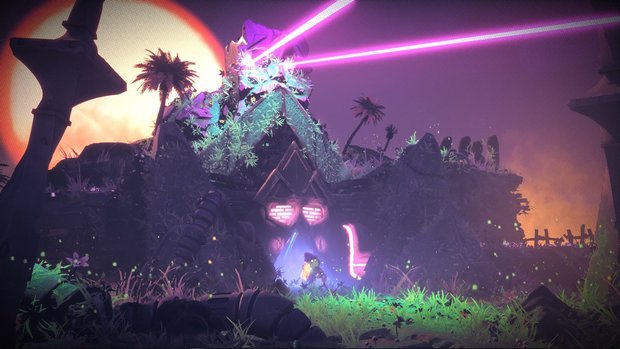 Before I know it, I’ve got a new power that lets me walk through radiated pools and leave a trail behind me for enemies to run into. As I turn foes into mince I notice that the world is also changing around me. My actions are reclaiming the broken wasteland and ushering in a new future. The procedurally generated map is a mix of old and new, as I stumble into underground caves full of advanced technology, then surface to see decrepit NPCs making a living out of the garbage. They’re often trying to sell you something or will help guide you through a side quest.

There are a lot of powers in the game, from exploding turret companions to swapping your head with a snake’s. Currency comes in the form of tapes and floppy disks, and you can swap your ancient tech for power-ups and statistical upgrades to curate a quirky build. Most of my first run had me wandering around finding totem poles to unlock a boss door, which would give me the items necessary to advance to the next wacky wasteland.

I eventually figured out the dodge roll, which even has a little tinge of momentum, meaning I had to time it quite carefully to avoid enemy fire. One of my favourite foes was a mutant that masqueraded as a palm tree. When you walk past, they’d shoot out of the floor and start attacking you, forcing a fight or flight response. RAD is actually quite the difficult game when you get down to it, and I think I’d have a much better time figuring it out at home rather than in a convention hall. 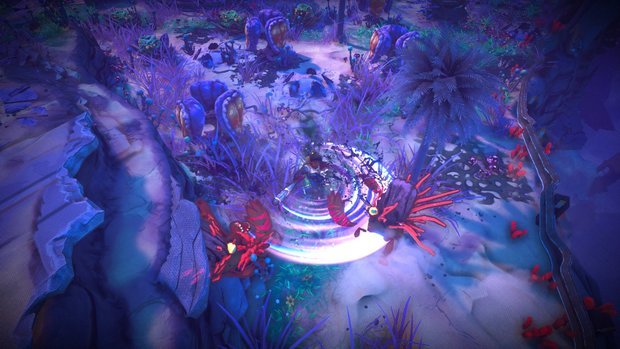 Later on, I’d get to grips with the more intricate moves in the game, like using a jump kick to push enemies way and charging my bat with the attack button to unleash a gnarly spin move. There’s also a ground pound ability you can use to stomp out bottom feeders if that’s your prerogative. You can combine these moves with your basic attacks and pull off killer combos with fluid animations.

Rice tells me that you’re always “trying to deal with these imperfect tools” to survive in the wasteland, and that’s naturally where a lot of the difficulty rears its head. I didn’t get to see this, but Rice also made note of a hub town that appears between levels where you can bank currency and get caught up in the narrative of RAD.

Alongside people you can talk to there are persistent items and new weapons to pick up. The levels are set up like World 1-1 – 1-2, where the more difficult enemies from the previous biome become standard and you have to be far more careful with your approach. There’s also a day/night and weather system in the game to keep things interesting as you fight through the mutant militia. 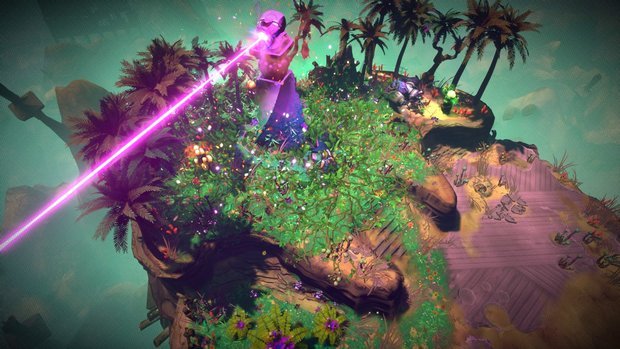 I liked the variety of abilities in RAD and the fact I could approach whatever part of the map I found interesting whenever I felt like it. It’s definitely one of the more inspired roguelike settings I’ve seen in recent years, and it doesn’t just feel like its banking on a current trend. The narrative premise, the music and the mutations truly distance it from its forebears, and of course, it has that endearing Double Fine charm that they’re known for. It’s lizard tongue-in-cheek

The only worry I had about the game was the fidelity. Playing on what I believed to be a docked Nintendo Switch, textures appeared fairly muddy and some parts of the map weren’t as legible as they should be in order to find particular items and advance puzzles. Hopefully, this will be ironed out as we approach launch, but it’s something to think about when you’re considering what platform to play the game on.

As of right now, I think I’d be inclined to pick it up on PC or PS4/Xbox One instead of the Switch, but I imagine it looks great when it’s undocked and you’ve got it in your palms. Also, this feels like a game you’d want to play on the go, so there’s that to consider too!

All in all, you’re going to want to keep this one on your radar. We don’t know exactly when you’ll be able to hop into the mutant wasteland, but it’s currently scheduled for a Summer 2019 release!